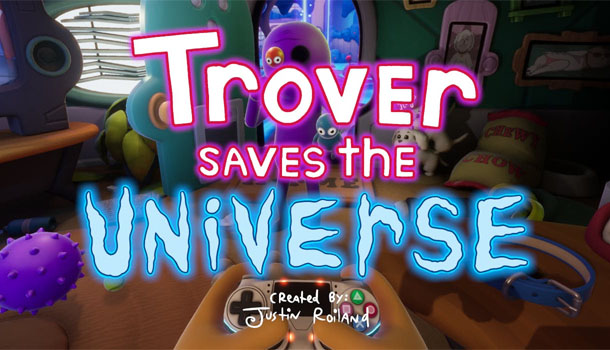 The most juvenile immature game I've ever played...and I LOVE IT!

Trover…Trover…Trover…what am I going to do with you? First, I’m going to wash your filthy mouth out with soap and then I’m going to give you an award for the funniest $%&@#$#!* game I’ve ever played in VR. What’s truly amazing is that Trover Saves the Universe is just as funny and almost just as good a game without the VR, but with the added perspective of virtual reality you, the player, become part of the adventure in this buddy action-romp across the universe.

From the twisted mind of Justin Roiland, the co-creator of Rick and Morty, comes one of the wackiest, funniest, and most delightful platform adventures I’ve played…well…IN MY ENTIRE LIFE. I’ve played other VR games that make use of Rick and Morty and their special brand of humor but nothing could prepare me for this. The game opens with your two adorable dogs getting snatched up by Glorkon, one of four supreme beings who has gone rogue. He promptly inserts your pups into his eye sockets and is now using their puppy power to destroy the universe. Don’t ask. 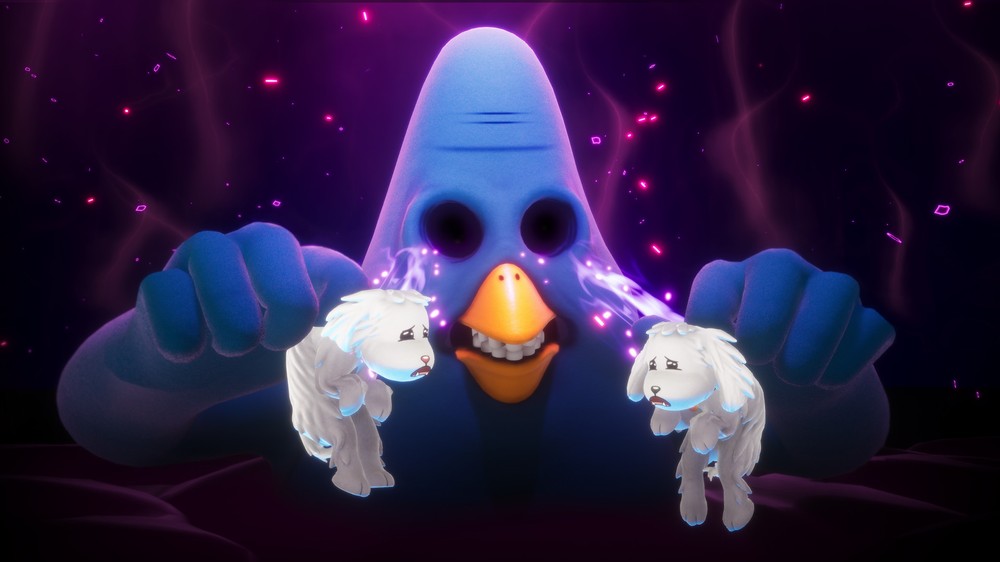 It doesn’t take long before Trover shows up at your door and insists that you both head out to stop Glorkon and save the universe. Prepare for nonstop hilarity and more profanity than a Quentin Tarantino grindhouse flick. What’s great about this game is that it is a co-op game where you play both parts of the team.   As a Chairopian you are resigned to your floating chair with fully visible arms and game controller resting in your lap. Using your real gamepad you control Trover who can run around, jump, and even pull out an unlicensed lightsaber to whack enemies or anyone else who annoys him. A great example is the first guy you meet – also in a chair – when you first leave your house. You’ll end up beating him with your blade then moving on only to have him taunt you as you leave. You can endure his taunts or send Trover back to teach him a lesson.

While Trover is free to move about the world it is always shown from the perspective of you in the chair and since you do not have free movement you have to continually move Trover to teleport nodes scattered about the land. Once there you can press R2 to warp to his location and then repeat the process across all lands and levels exploring and collecting and fighting various enemies. Using your space pod you get to travel to all sorts of wacky planets collecting various amounts of green power babies before reporting back to Trover’s holographic boss. Green power babies fuel the upgrade system for Trover, granting him additional hit points while other power babies bestow fresh abilities when one baby eats another then gets stuck back into Trover’s eye socket. Oddly enough, as gross as this all sounds it’s totally charming. 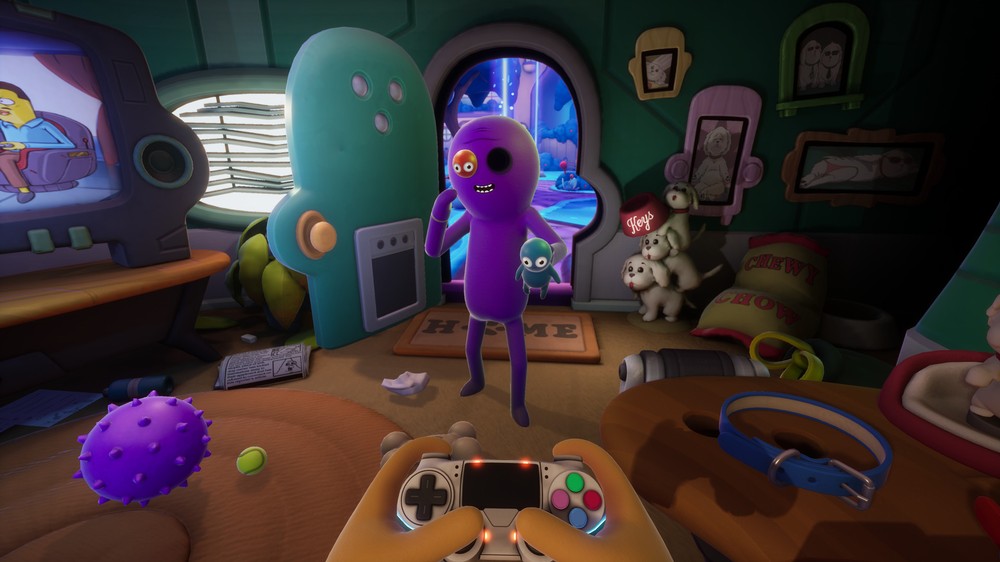 The level of cooperative gameplay is actually quite challenging and implemented seamlessly into the design. While you as the gamer have direct control over Trover, you as the Chairopian have your own set of abilities such as opening up pod plants to be used as springboards or finding secret green power babies and absorbing them with your gaze. Later, you will get telekinetic abilities to move and rotate objects to solve puzzles. Your chair even has three levels of verticality allowing you to literally rise up to meet new challenges or just get a fresh perspective of the alien landscape.

The single most impressive element of Trover Saves the Universe is the dialogue. Trover and nearly every other character you encounter, no matter how insignificant, seem to have an infinite stream of dialogue. Admittedly, 50% of what comes out of everyone’s mouth is an endless stream of profanity totally for shock-humor value, and you are desensitized within the first 10-20 minutes of gameplay. It’s just so ridiculous that anyone would talk that way you can’t possibly be offended. What I truly loved about the dialogue is that it almost seemed unscripted with natural pauses, mistakes, and corrections, like the entire recording session was done in a single take. Even more impressive is how much of the dialogue directly relates to your actions within the game, almost to the point of play-by-play commentary. The idle prattle of characters you encounter is equally delightful with a variety of personalities that will have you pausing your progress in the game just to see how much they will say before it starts to repeat. I’ve listened to certain characters upwards of ten minutes and it’s all original material like the two guards on the fortress wall that start by taunting Trover and myself, but if you move away they start talking about their favorite “Seinfeld” episode and doing impressions of their favorite characters. When you come back to them later they are doing calisthenics. The bottom line is that the entire time you are playing Trover Saves the Universe it’s like having an entire improv troop in the room voicing the game live. 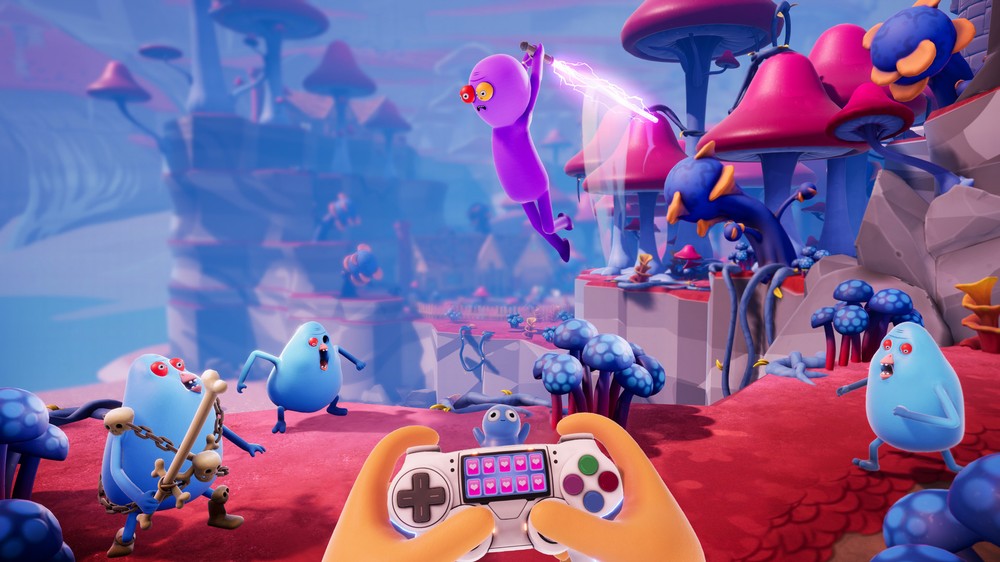 It’s worth noting that Trover Saves the Universe doesn’t require VR, but after having played this for several hours on both the Vive and the Oculus Rift S then trying it on a standard screen the game just isn’t the same. There is a total lack of immersion and much of the design and humor falls flat (pun intended) outside of VR. Of course those without VR will never know what they are missing and can still enjoy all the other elements that make Trover special.

As for any differences between Vive and Rift, there were none really, especially since the game recommends a gamepad. The Rift S did offer superior visual quality when it came to showcasing the delightful alien planets and crazy character designs. I was super-impressed with the smooth curved lines of Trover, especially up close, and all the fun plants and architecture. Given the static nature of having the camera locked to the Chairopian who is locked to warp nodes there was absolutely no motion sickness and the draw distance was impressive even when elevating your chair to its highest level. 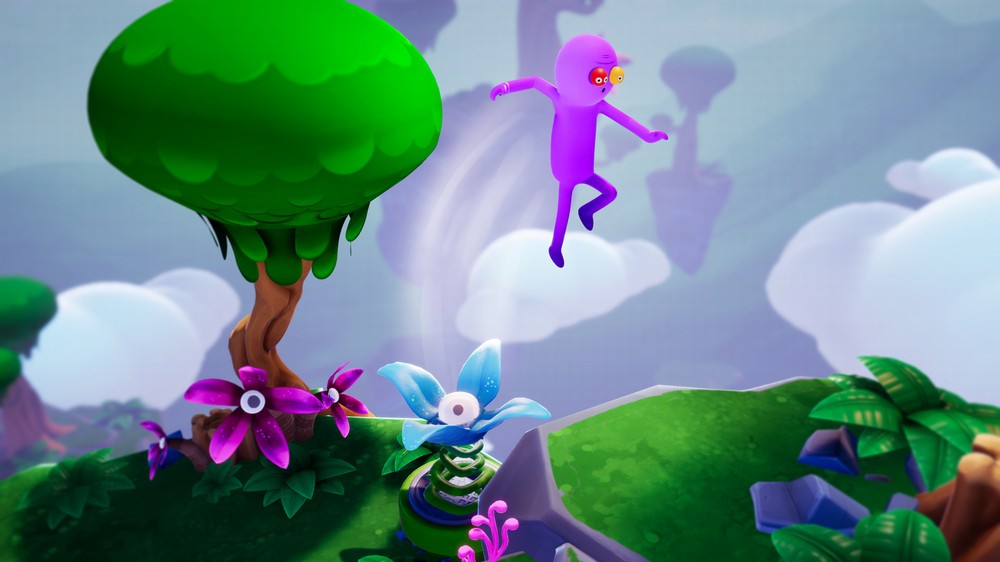 Trover Saves the Universe is surprisingly lengthy with numerous planets to visit, hundreds of green power babies to collect and countless hours of laughter. You don’t have to be a fan of Rick and Morty to enjoy this game (it might help) but you will have to have (or develop) a tolerance for naughty language. What surprised me the most was how this could have easily been a throwaway platformer that relied on saucy humor to get by, but in reality Trover is a great platformer, and with the clever integration of co-op mechanics and parallel gameplay, offers something truly unique beyond its excellent VR integration. Trover Saves the Universe is definitely targeting a specific audience and if that happens to be you then you are going to have a blast saving this universe.