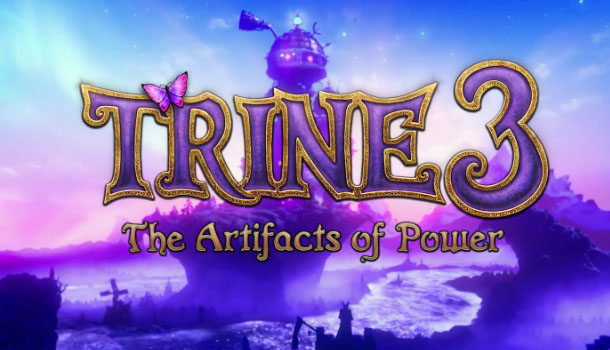 The ambition overshot the reality, resulting in a game that doesn’t quite know what it’s trying to do.

My first exposure to the Trine series came as part of an ill-fated attempt to introduce my partner to co-operative gaming, back in the earlier days of the PlayStation 4. Despite that effort not working out, I’ve since been fond of the series, and jumped at the chance to play Trine 3: The Artifacts of Power on Nintendo Switch, especially as I hadn’t yet had chance to experience the game from its earlier release back in 2015. Trine 3 brings back our trio of heroes (Pontius, Amadeus and Zoya) and sets them off on a new adventure, one that will teach them about the history of their world, and about Trine itself.

Trine 3 marks the first time that the series has experimented with fully 3D levels, and while the game still delivers a fairly linear level progression, the new sense of scale allows for some fun exploration and for the areas that you explore to feel more alive than 2D can sometimes deliver. This new perspective brings with it swooping camera work and windings paths through areas that make the game feel more like an epic, but there’s a sense that the developers aren’t always fully sure of how to build their puzzles in a 3D environment. Though the menu screen boasts of the fact that many puzzles have multiple solutions, I managed to brute-force my way through some navigational puzzles by cheesing my way through, jumping around objects or over obstacles, and it didn’t necessarily feel like this was the developers’ intent. 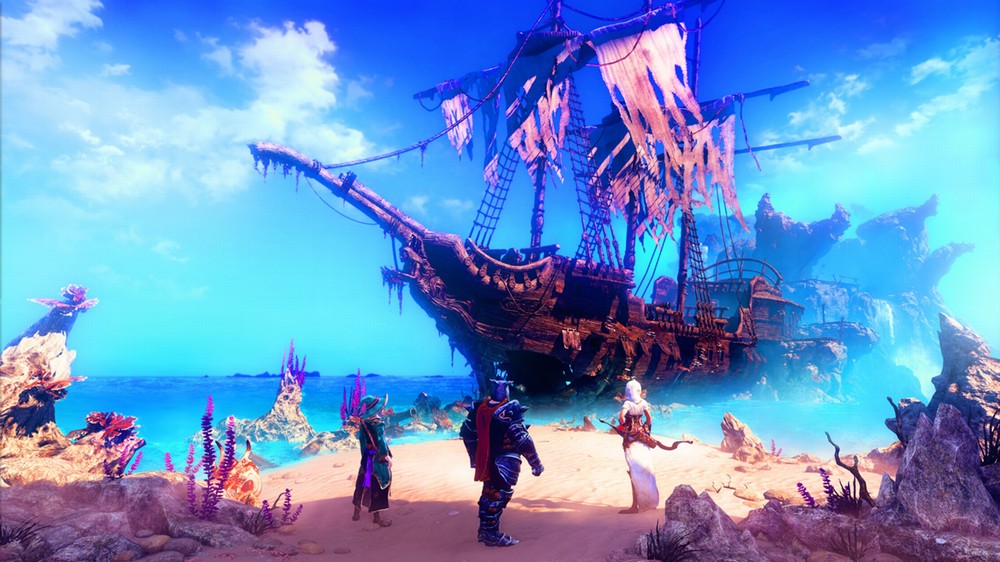 Puzzles are largely solved by working out which of the three heroes are best to tackle the problem in front of you, as they each have different abilities that relate to their character type. Pontius, the Knight, is the best option for combat and anything that require feats of strength, while Zoya, who’s a Rogue, can use her bow and arrow to hit distant targets and her grappling hook to pull objects or swing across gaps. You only control one character at a time, and switch between them using the L and R buttons, meaning that you don’t so much combine abilities as use them in close succession. The one character that I found I often overlooked was Amadeus, the Wizard, as his abilities never seemed to be quite the right fit for the puzzles in front of me. I’m not sure if this was a failure on my part to see his usefulness, or whether the nature of the experience just didn’t lend itself to his particular talents.

As you make your way through the world you’ll start collecting glowing objects, known in game as Trineangles, which operate as a form of progression-based currency. Once a level is completed you return to the world map, from where you can select the adventure that your characters will head off on next. This offers the illusion of freedom more than anything else, as the story progresses in a definitively linear manner, and the only option to veer off of the main path is to take part in side-missions which operate much like challenge rooms, only with a slight brush of story that is supposed to fill in details about the main characters’ adventures. Both aspects are a little underwhelming, such as Pontius’ tale of having fallen in a hole and needing to make his way back to his friends, and the fact that the gameplay is mostly either straight combat or entirely navigation-based, depending on which character the level is focused on. 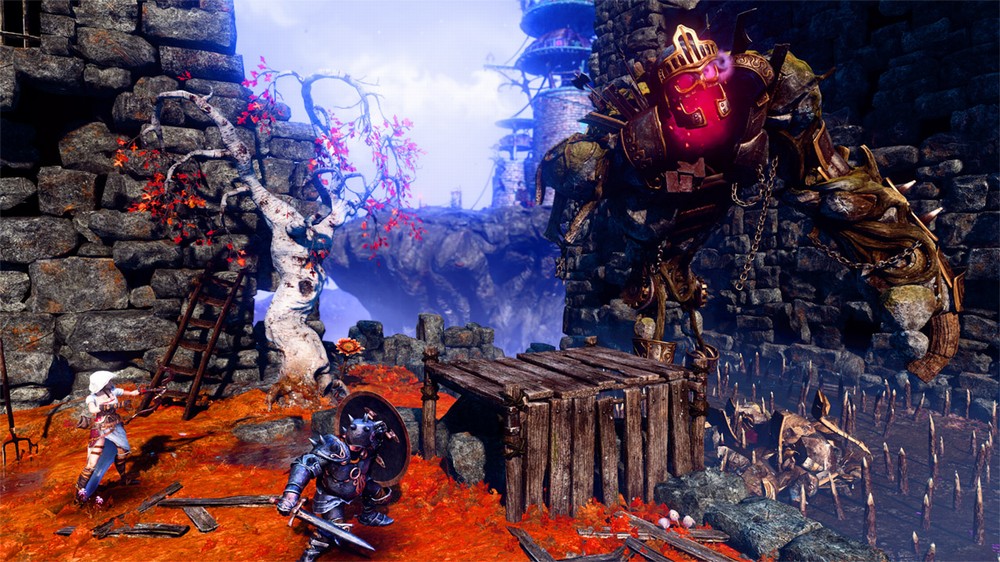 The point of these levels is to earn more Trineangles, as these are used to unlock later stages so that you can progress in the game. In a move that feels a little too much like a free-to-play mobile game design, Trineangles aren’t just required to unlock extra side missions, but also to gain access to story missions as well. This feels like a cheap attempt to artificially lengthen a short runtime, and though most of the collectibles can be found not too far from the main path of each level, and can be gathered with little effort, it’s still frustrating to be approaching the late game and discover than you have to return to earlier levels to collect these glowing McGuffins for no real reason other than busywork.

On a technical level, Trine 3 is a similar mixed bag of an experience, with strong visual design being hampered by some jagged edges and murky colors. As I haven’t played the game on any other platforms, I’m not sure whether this is due to the limitations of the Switch or not, but it was a shame to see some conceptually excellent environments and design decisions being hampered by sub-par visual execution. I also experienced a few instances of pretty drastic slowdown, only remedied by fully exiting and re-entering a level, and one reoccurring bug where a character would attempt to grab a ledge and then fly rapidly around the screen, being dumped unceremoniously at random, whether it be on-screen, trapped behind scenery, or off-screen entirely. It’s a shame, as, without trying to spoil it, this issue was most prevalent on a level that brought a really interesting visual switch-up that I was genuinely impressed with. 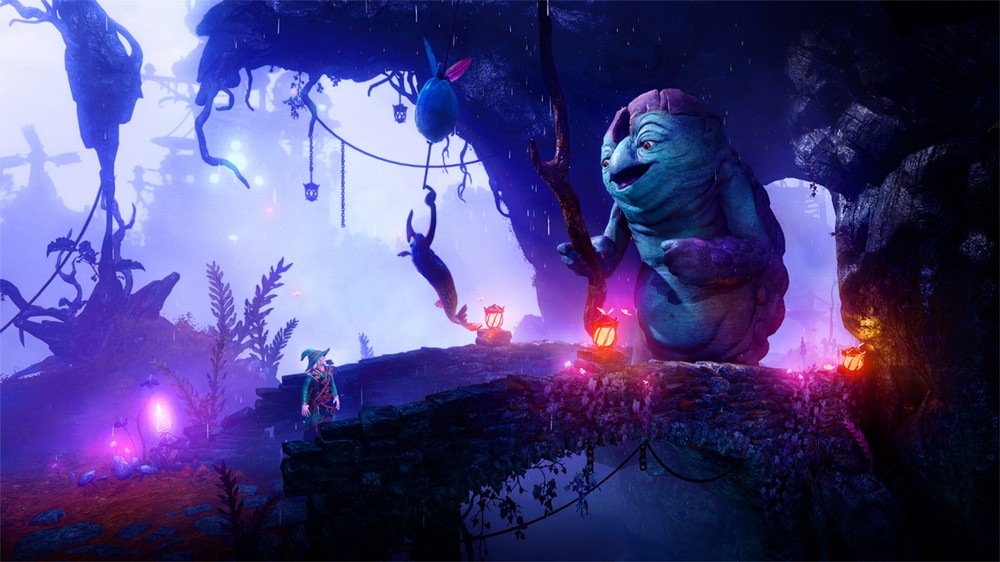 I’m well aware that this review seems overly negative, so it may be confusing to read that for the most part, I enjoyed my time with Trine 3, however short the overall experience may be. There are visual and conceptual design choices on show that make the world feel alive and like an enticing place to be, but these are hampered by technical issues and structural decisions that hold the game back from being as good as it could be. Trine 3 attempts to build on what’s come before to make a bigger and better experience, but it feels a little too much the ambition overshot the reality, resulting in a game that doesn’t quite know what it’s trying to do. It’s a shame, as shooting for the stars is often praiseworthy, but Trine 3 is unfortunately an example of what happens when such an approach falls short.