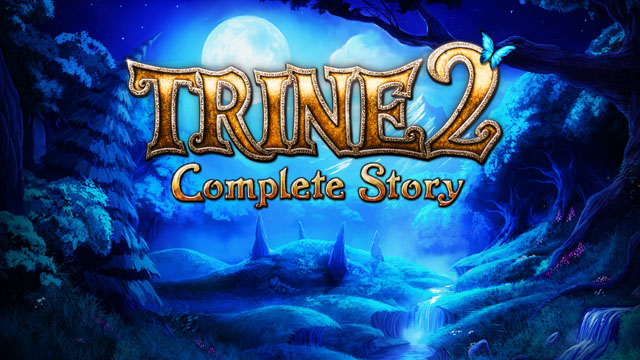 Even after two years, Trine 2 is one of the most charming and addictive platform-puzzle games of the last and the new generation, and the PS4 version is the most complete way to experience it.

Back for my third review on my third format, welcome to Trine 2: Complete Story.  Frozenbyte is bound and determined that everyone has a chance to play their stunning platform-puzzler, so it’s no big surprise that this is debuting as a launch title for Sony’s new PlayStation 4.   Complete Story is a significant technical upgrade and a slight content upgrade from the Director’s Cut version that released on the Wii U last year, and all of these console variations are compilations of the content previously available on Steam in both the core Trine 2 game and the Goblin Menace DLC.

The PlayStation 4 marks the most comprehensive bundle released to date, both in features and content including Trine 2 and all of the Goblin Menace levels now seamlessly integrated into the story as well as the Dwarven Caverns bonus level awarded after finding all ten pieces of the map scattered about the Goblin Menace levels.  The nice thing about having the DLC integrated rather than offered as a separate adventure is that now all of your upgrades from the main game carry over into the expansion levels.

It’s a bit ironic that one of the best games offered at the PlayStation 4 is not only a digital download title being offered on the PS Store, but also an upgraded port of a game about to celebrate its two-year anniversary, and yet it still holds up as one of the most beautiful and addictively fun games I’ve ever played.     Trine 2 has already dazzled me on last-gen consoles as well as PC, so I was eager to once again dive into this charming storybook world with soothing narration, stunning, rich, vibrant, gorgeous, amazing, (excuse me while I consult my thesaurus…) , dazzling, astounding, elegant graphics.  And it probably didn’t hurt that Trine 2 also offers some of the most satisfying platform-puzzle gameplay that mixes the best parts of Lost Vikings (look it up) and Portal 2.

All hyperbole aside (if that is even possible), Trine 2: Complete Story is quite simply the must-own game for the PlayStation 4 and at only $20 there is no reason for you not to be playing, especially since this version packs in all the bonus adventures of the Goblin Menace along with a few other exclusive features that make this a tempting offer for those who may own or have already played a previous version. 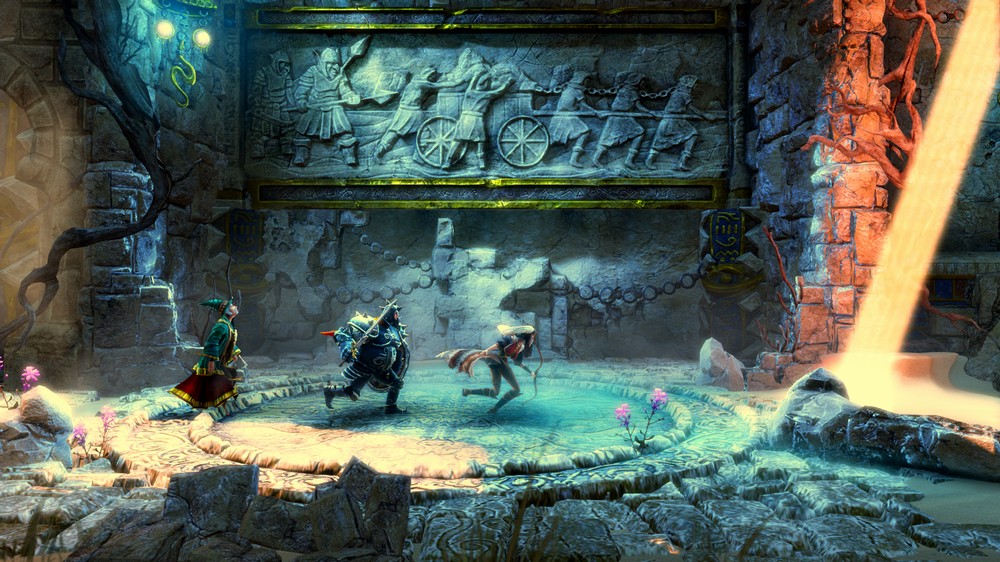 Obviously, Trine 2 is a sequel, although, it doesn’t require any knowledge of the first game as we meet up with Amadeus the Wizard, comfortably napping after long hours researching the elusive Fireball spell. A rush of wind forces the door of his cottage open extinguishing the lights, and then a bright light shines through the window waking him up. Amadeus staggers outside into a lush storybook wonderland that serves as your first of three character tutorials.

Once Amadeus meets up with the Trine (a magical beacon of light), you will link up with the other two members of your team, Pontius the Knight, and Zoya the Thief, who each have their own introductory lessons that showcase their unique skills and abilities. Pontius is your fighter armed with sword, shield and hammer while Zoya uses her bow and grapple for ranged combat and platform navigation. Together, these three are an unstoppable force once you learn to master their unique talents.

There is also a nice leveling-up process that requires you to collect these glass jars scattered about the levels. Some are quite obvious while others require special feats of navigation and acrobatics, or perhaps magical intervention or even the forceful smash of Pontius’ blade or hammer. For every 50 you collect you will obtain one skill point that can be spent to upgrade any of the three characters in various ways.

Amadeus’ skill tree allows him to levitate a monster or increase his initial conjuring ability to include multiple objects or even a plank; a nice alternative to the normal boxes he can summon. Zoya can upgrade to fire and ice arrows or even unlock a stealth ability while Pontius can upgrade his shield so it freezes his enemies or give his hammer a Thor-like throwing ability. The various upgrades get progressively more expensive, so you often have to bank your skill points and save up for the more powerful enhancements.

Gameplay, or at least the concept, is eloquently simple by design but the actual game provides some of the most fiendish puzzles of any game to date.  And thanks to a wonderful physics system, there is an unparalleled ability to experiment and solve these navigation, combat, and item collection puzzles in a multitude of ways. I came away from 60% of the puzzles in this game thinking I had “tricked the designers” and had done something “nobody else would ever think of”. 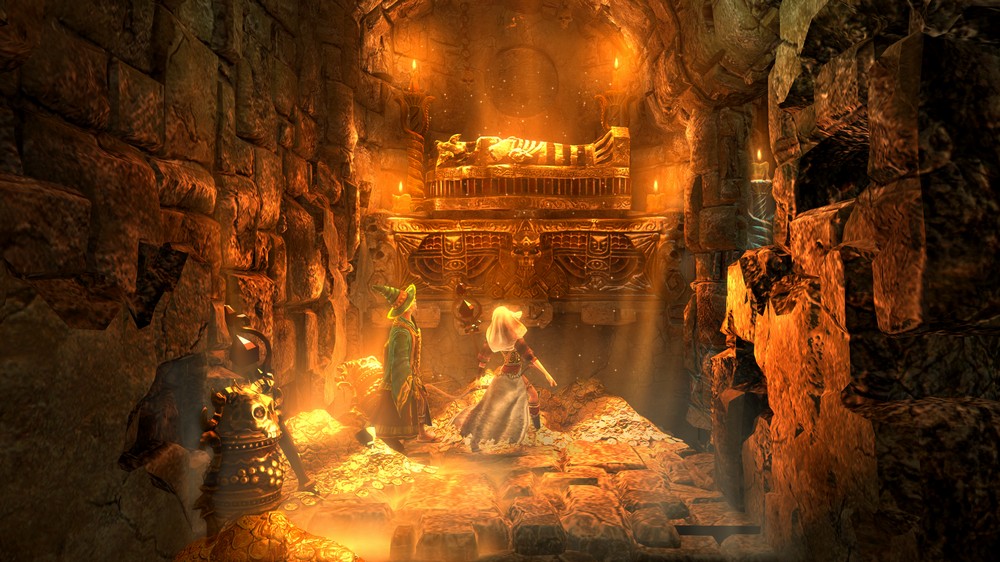 The DualShock 4 does a competent job of providing smooth and accurate controls for each of the characters.   The touchpad can be pressed to summon the upgrade screen or you can drag your finger around the surface to have Amadeus levitate and rotate objects.   It’s a valiant attempt to mimic the superior mouse controls of the PC, but ultimately you’ll find the analog sticks do a much more reliable job.

If you are playing Trine 2 solo then you can only have one character active at any time, but you are free to switch them out on the fly, even in mid-jump. This presents some creative opportunities for solving a great many of the game’s puzzles. But when you play the game with one or two others all new possibilities present themselves because now you can have two or three active characters working as a team to solve these puzzles.  Couch co-op is preferred since it’s easier to coordinate in a local group rather than having two or three gamers squawking commands over their chat headset.

Unlike previous versions of the game where you could use Amadeus to create a box or plank and have co-op players ride the object like a magic carpet, summoned objects will cease to levitate when another player steps on them.   You can still use created objects as quick stepping stones for other players, but the designers finally fixed a major flaw in the co-op play.  Summoned objects still make collecting jars stashed on high ledges a breeze by still being able to knock them down to the ground.  The camera also needs to pull out a bit more in co-op play. Way too often you are fighting the edge of the screen (and the other players) to grab an object just out of reach.

While worthless in combat, Amadeus is still my preferred character or at least the one I actively play when not required to switch to the other two. His ability to conjure boxes and planks is critical in just getting through the levels, and the more boxes and planks he can summon, the easier it is to get through the game and get a 100% collection. He can also levitate the environment like rocks, logs, leaves, and even these deadly spore-shooting plants that can be aimed at the enemy. You can also affect the environment like jamming a summoned box into the gears of some machine, moving pieces of pipe to create new air streams, or tug on a curled leaf to redirect water flow to irrigate a seed into a climbable plant.

Pontius comes into play whenever the game throws a batch of enemies at you. He can slash his way through most with ease; others require being stunned first, and others require a pounding with his hammer.  Zoya is great for targeting enemies perched on ledges or shooting fire arrows into exploding barrels. Her grapple is perfect for zipping up to the top of the screen or swinging across bottomless chasms.  And when it comes time to go swimming, you can enjoy three individual air meters, effectively tripling the time you can spend exploring underwater as long as you switch characters. 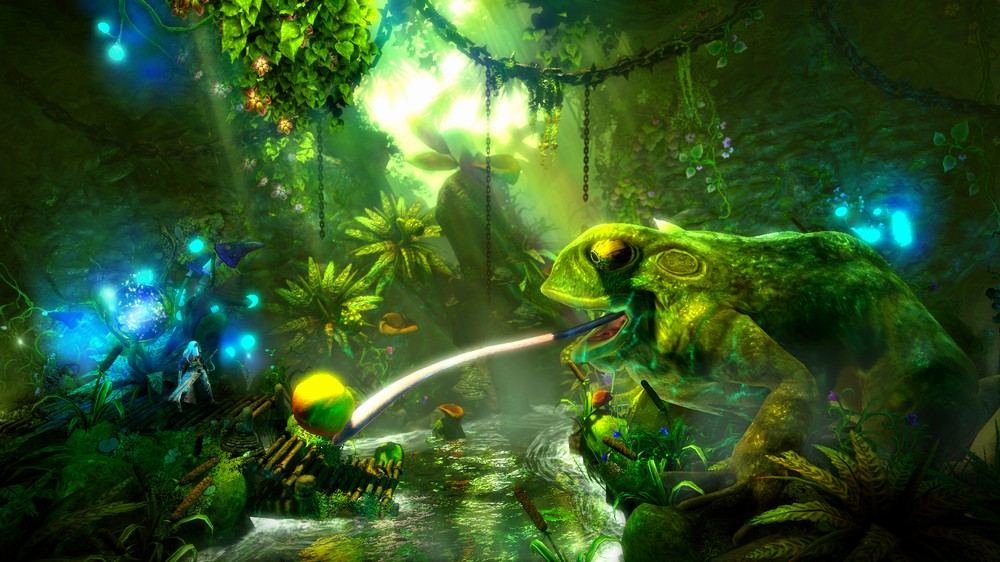 There is a steady progression in difficulty in both the gameplay and the puzzles yet Trine 2 never gets frustrating thanks to its wonderful healing and checkpoint system. About every two screens scrolled there is a glowing orb that will heal your party and resurrect any dead characters. There were even a few combat encounters that take place on the same screen as one of these orbs, effectively making you indestructible. You’ll never have to repeat a combat or solve a difficult puzzle twice in this game.

As “hinted” at above, Trine 2 is simply gorgeous and makes great use of the powerful graphics on the PlayStation 4 and also marks the first console appearance of the game in 1080p and 60fps (all other consoles games have been 720p and 30fps).  The game also supports stereoscopic 3D and will prompt you if it detects you have a 3D TV.   The colors, and the multi-scrolling backgrounds and the sheer level of detail will have you studying the artwork as much as the puzzle designs. The sound design is right up there with the visuals thanks to quality voice acting, mostly by the narrator, but also the three individual characters who will often chime in with their own quips and remarks showcasing their unique personalities and their group dynamic. Ambient environmental sound effects like wind, rain, flowing water, fire, explosions, crumbling rocks, the splash of acid, the roar of a dragon or the bellow of an Ogre king all mix in to create a living fantasy world; one that is uniquely complemented by the magical score composed by Ari Pulkkinen.

Trine 2: Complete Story is a solid 12-15 hour game when you factor in the embedded DLC; although your mileage may vary based entirely on how easily you can figure out the puzzles it presents and whether or not you are playing alone or co-op. There is a built-in hint system that you can tweak to provide hints after a certain amount of time. Completionists will want to go for the perfect kills and collectibles, both XP jars and hidden treasures, plus many fun and challenging Achievements, and there are interesting Game+ modes to experiment with after your initial trip through the game.

Trine 2: Complete Story is simply one of the best and most gorgeous PlayStation 4 games you can play at launch, offer AAA gameplay at a third of the cost of similar games.  And even if you have already played Trine 2 on another system, it might be time to experience the magic of Trine 2 all over again.  It is an unforgettable and timeless adventure that will keep you glued to your TV from start to exciting finish. 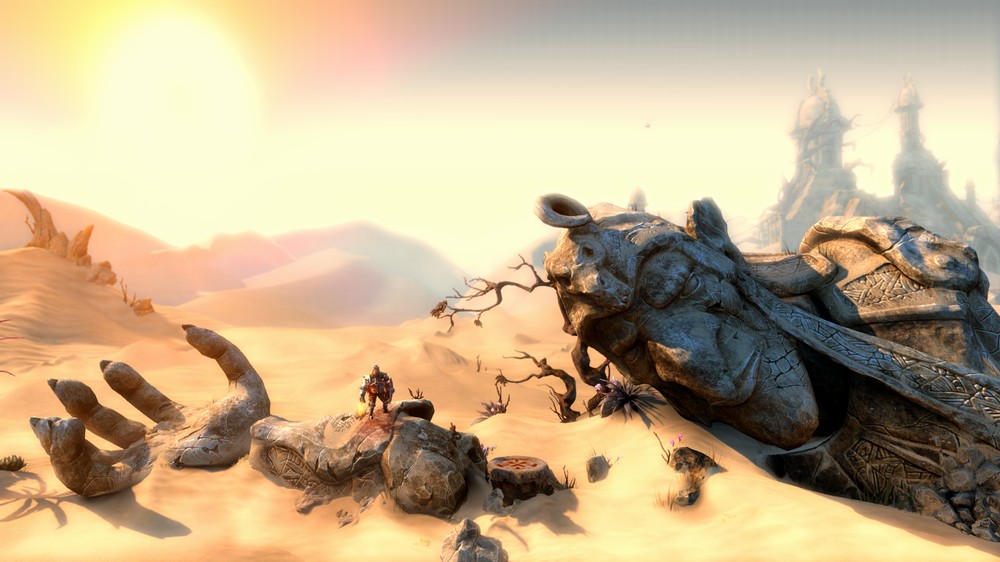 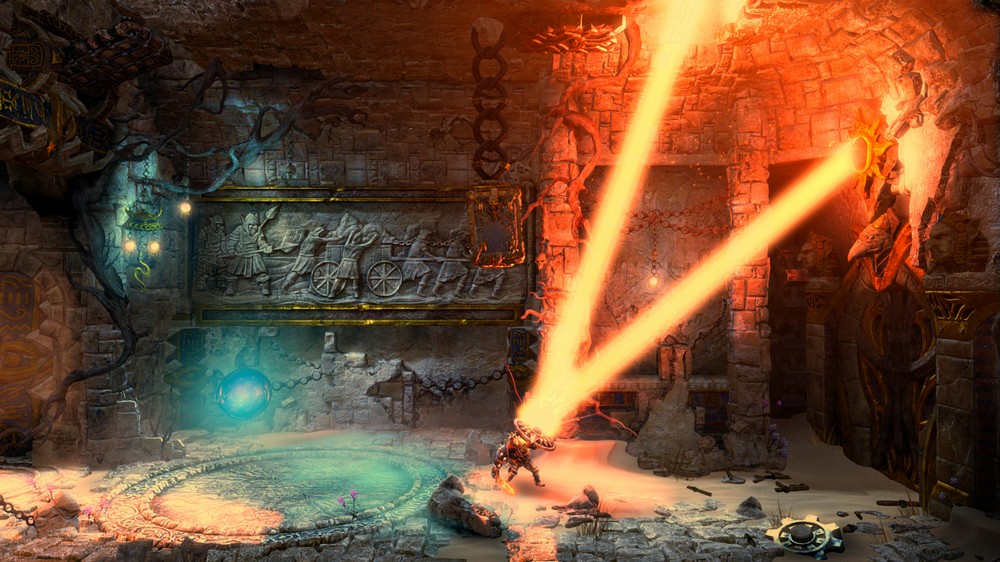 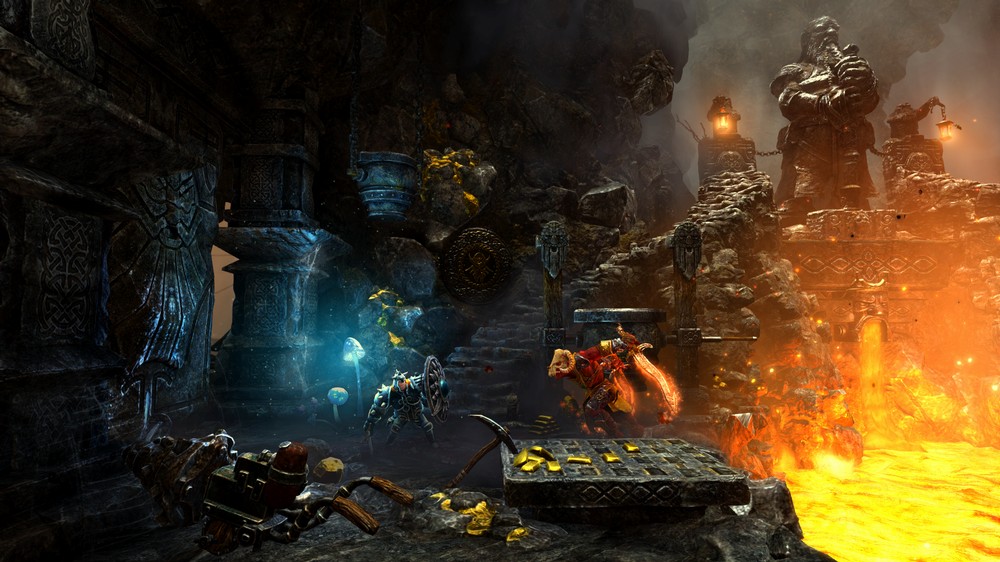 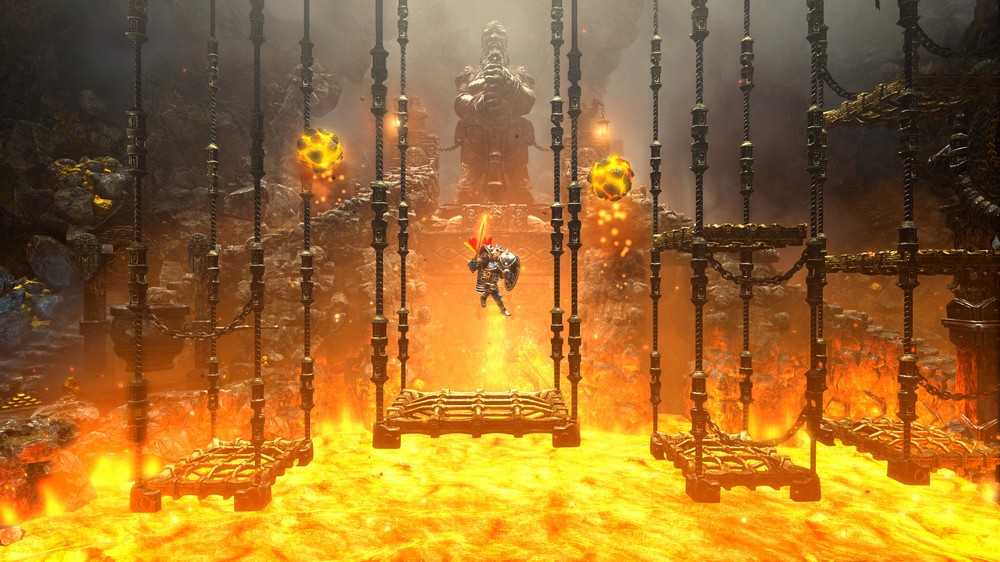 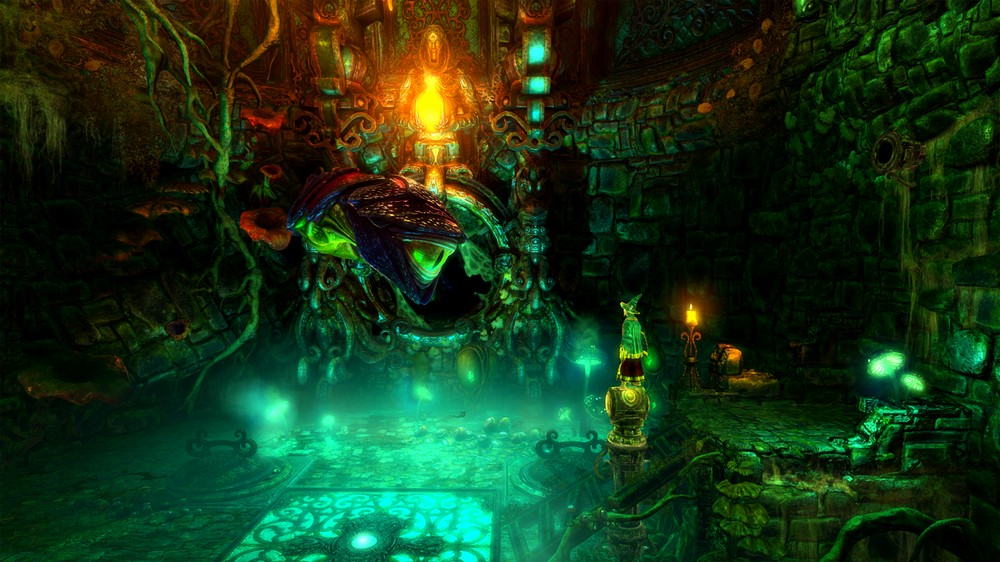 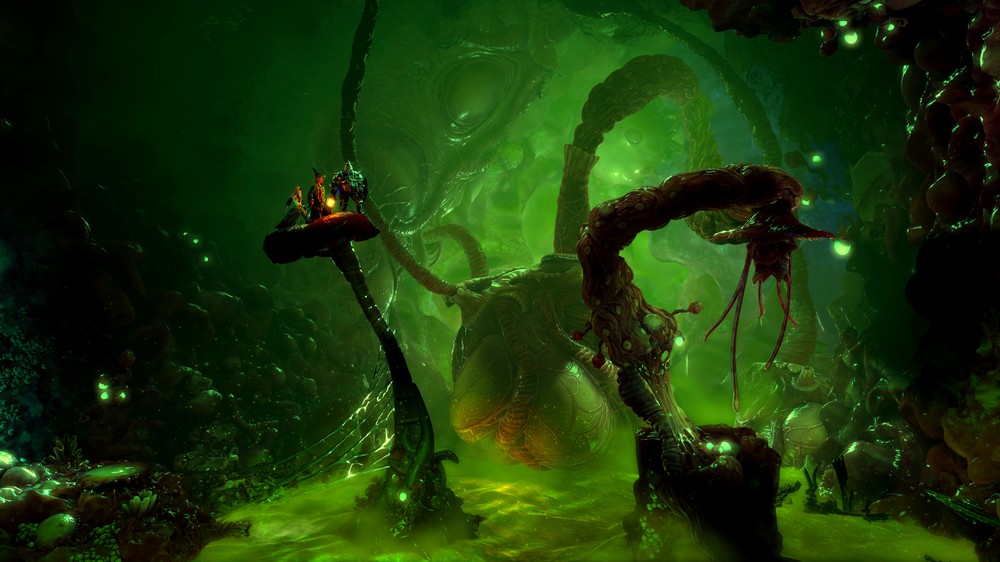 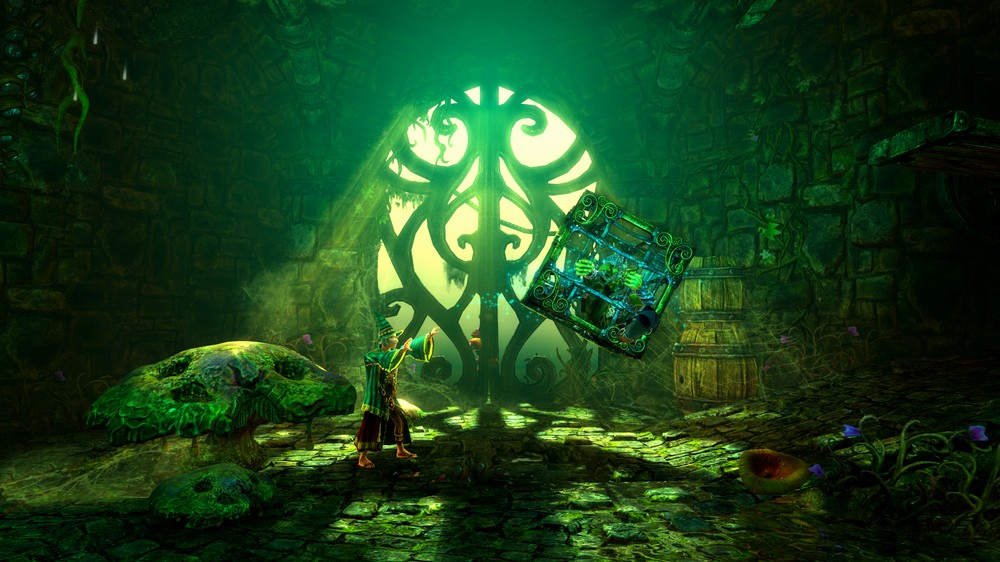 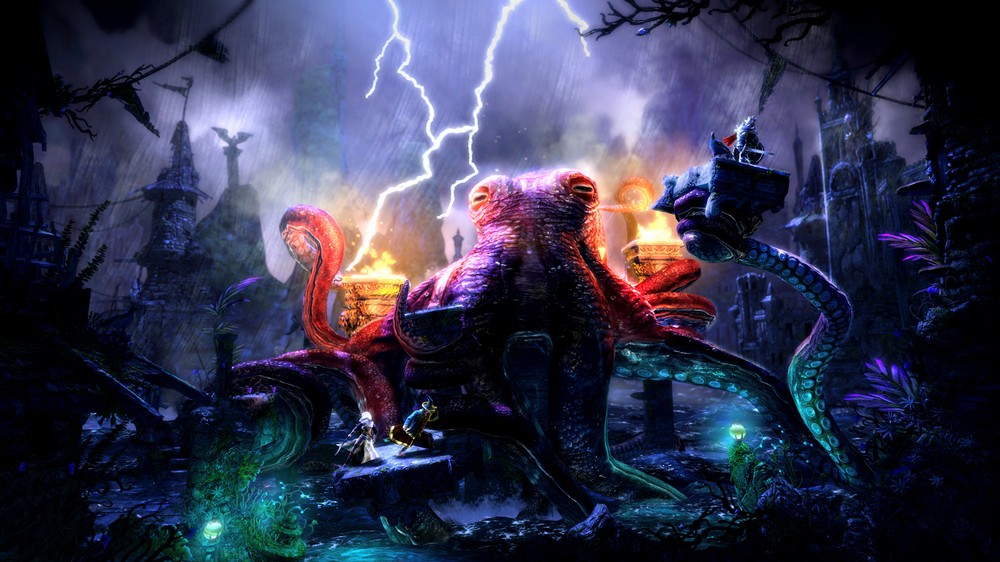 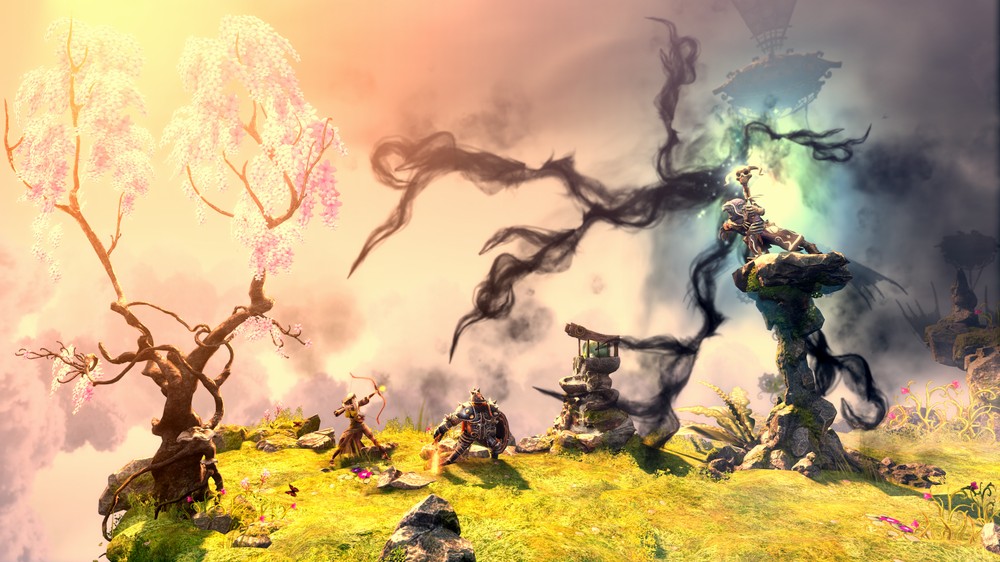 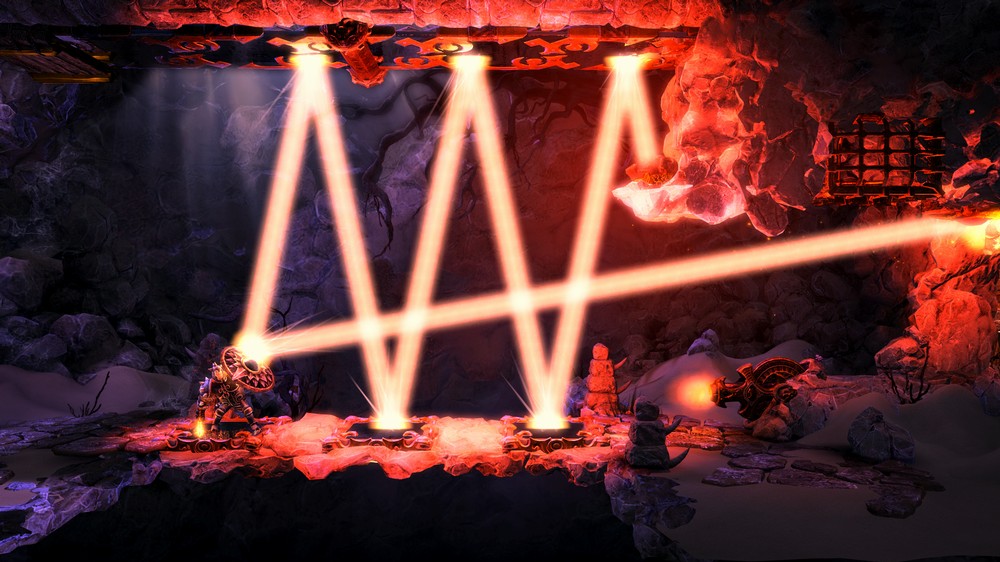 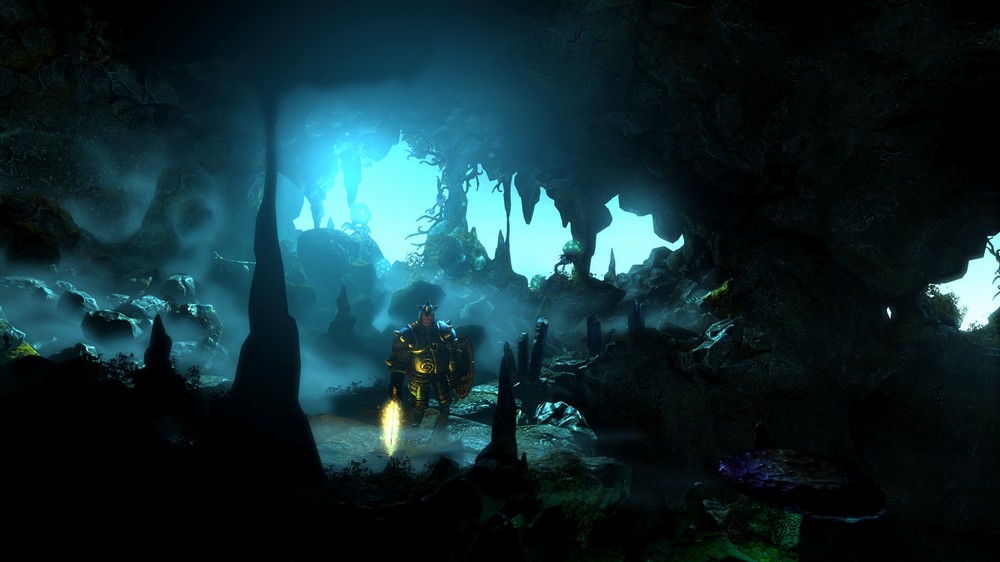 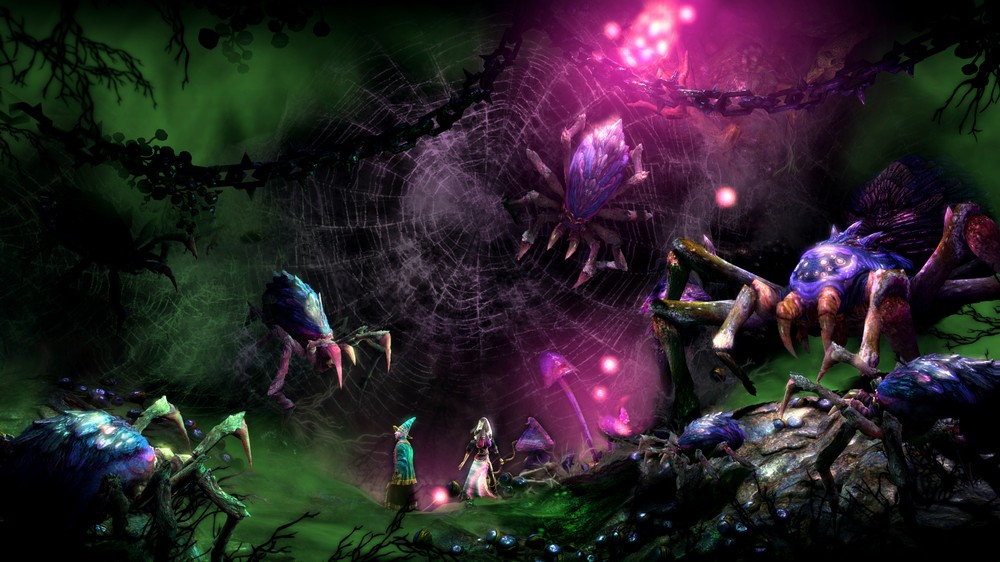 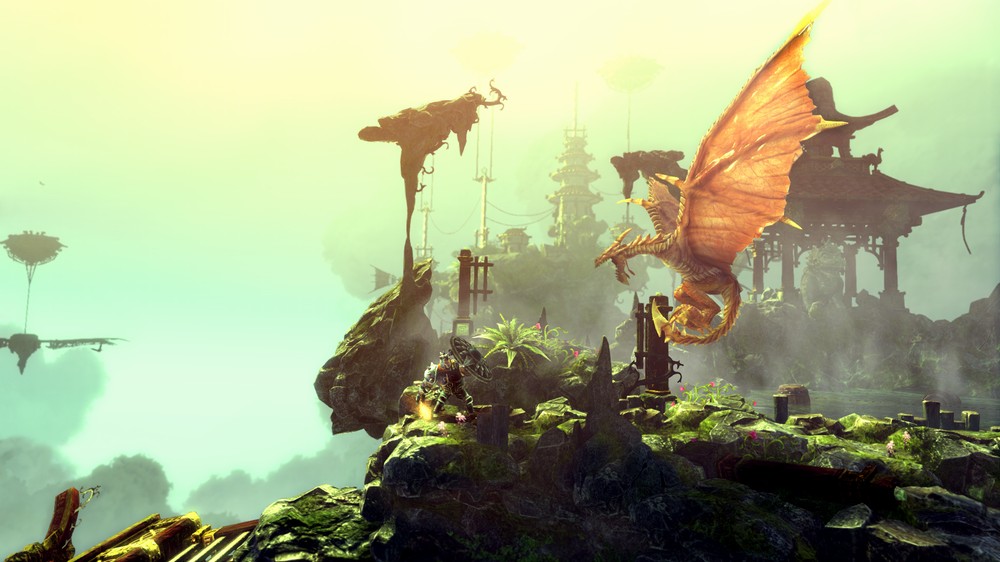 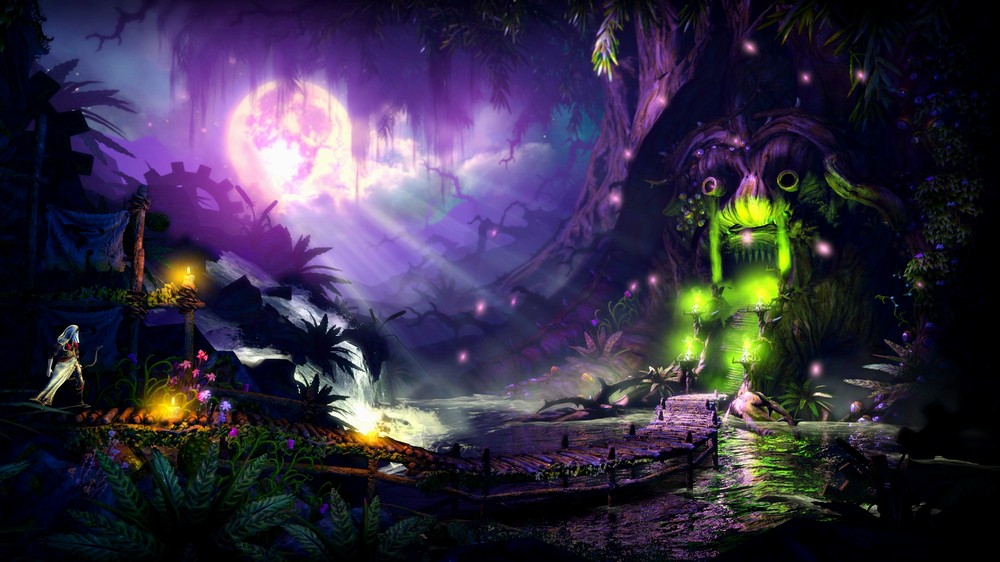 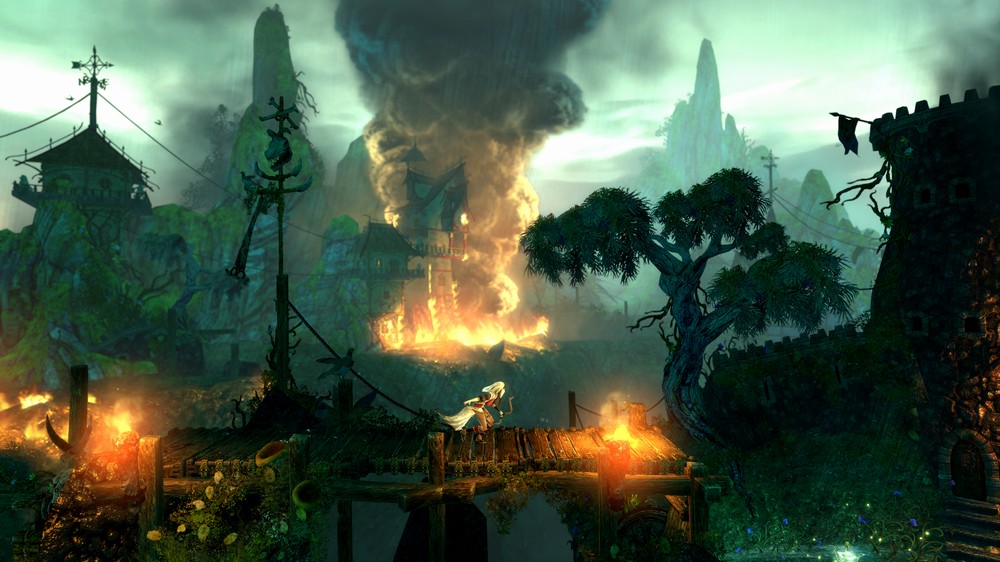 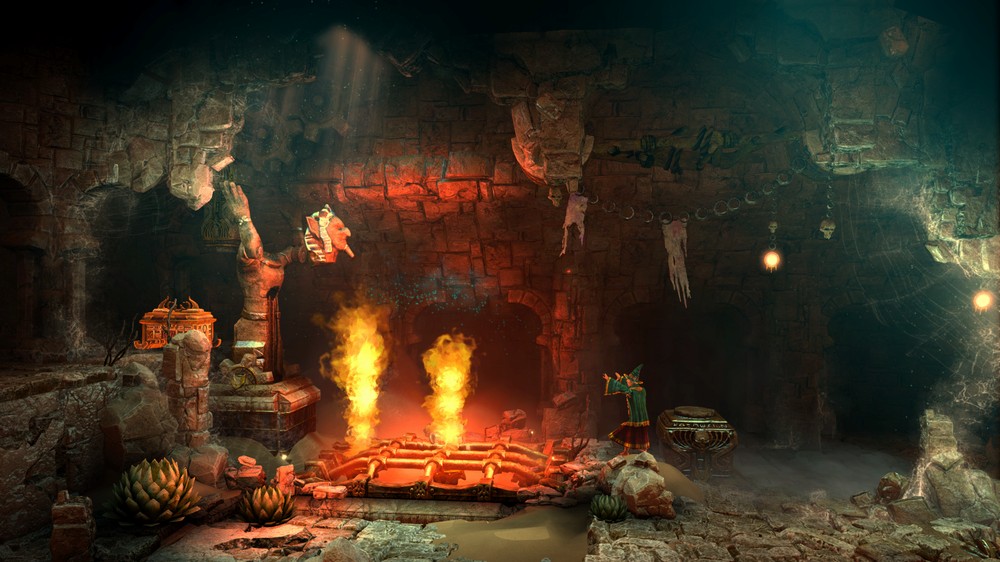 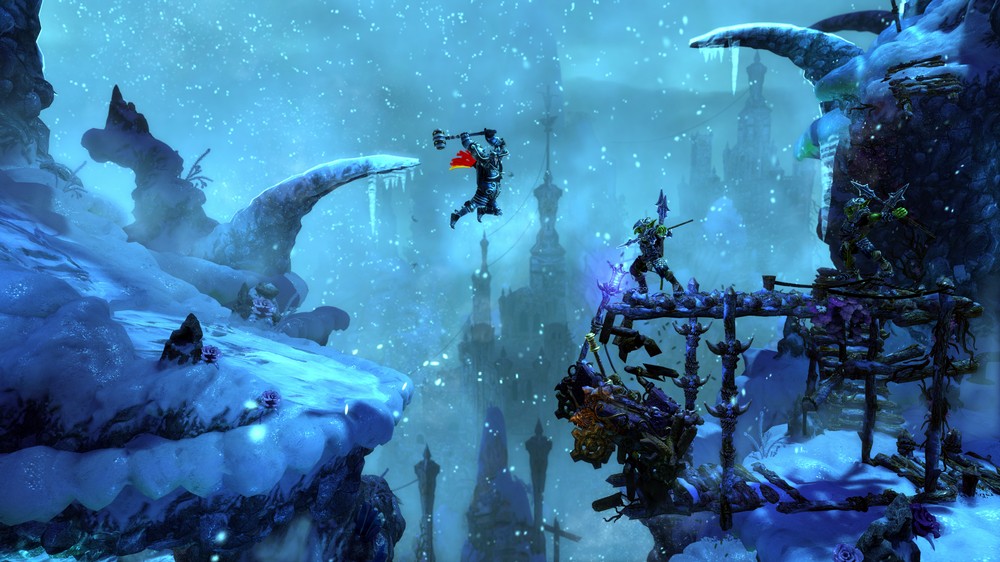 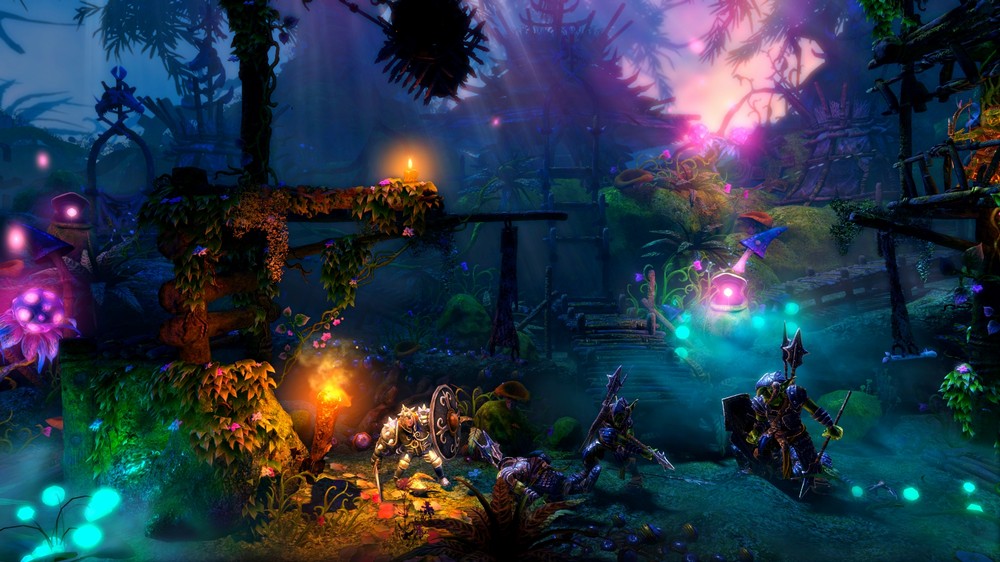 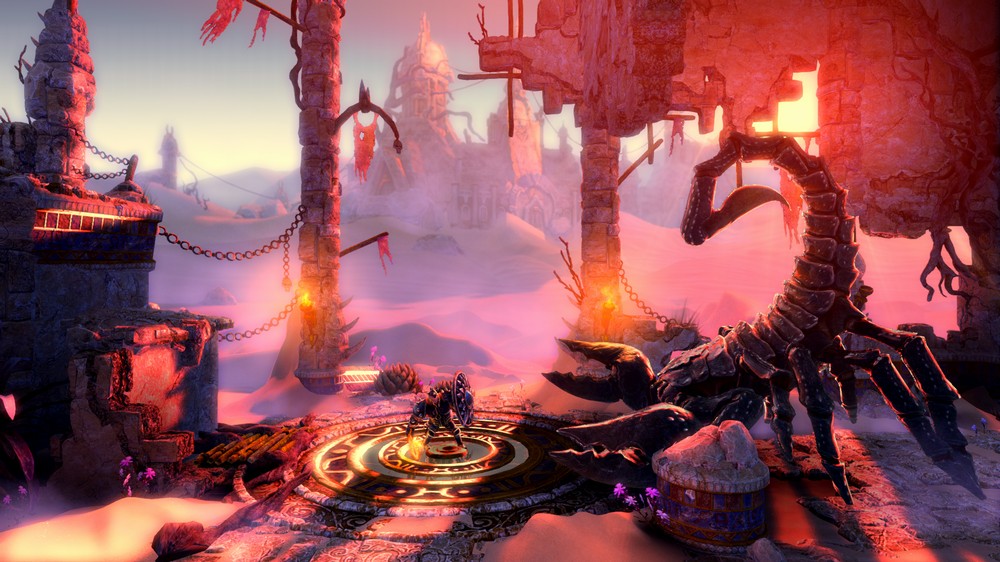 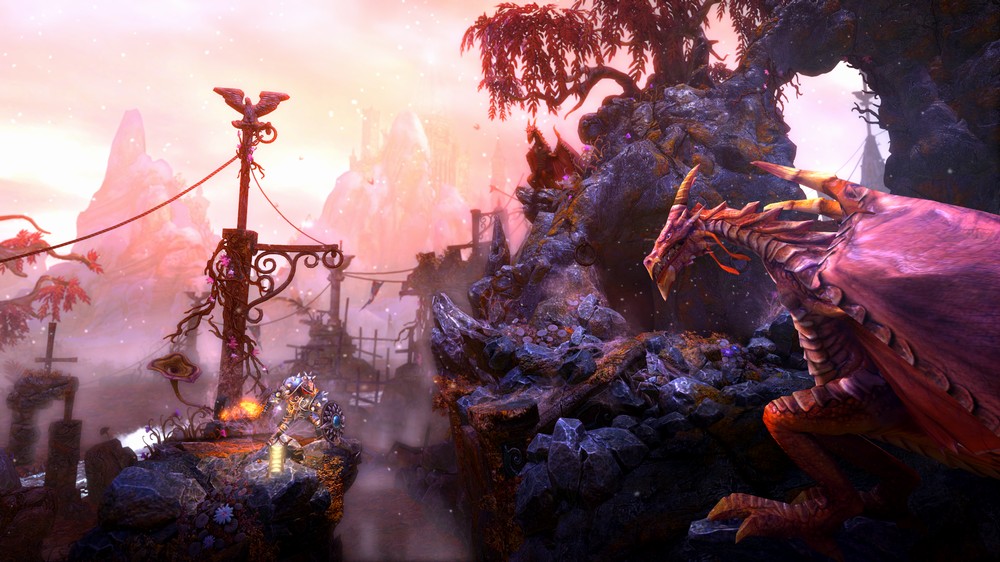