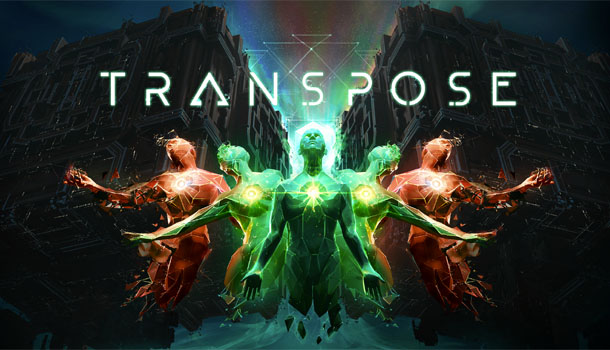 - Crazy/confusing puzzles later in game
- Not much of a story

Get lost in its surreal design while challenging your brain to some of the best logic and physics based puzzles you can find in VR.

I had no idea what to expect when I slipped on my VR headset and entered the Tron-like world of Transpose, a game that can best be described as a futuristic cyber world with heavy influence from another great puzzle game (also in VR), The Talos Principle.  The game eases you into its straightforward design and rules then turns you loose to solve one increasingly difficult puzzle after another in a constantly changing and incredibly wondrous series of environments.  This is the perfect fit for VR.

In lieu of a proper story we get the random philosophical quotes before being dropped into what looks like a more colorful and thoughtfully designed version of what TRON wanted to be.  The architecture is jaw dropping, alive with subtle animations and vivid colors that stretch off as far as the eye can see.  The visual style makes the most of simple shapes and designs combined with excellent textures, so it all looks fantastic in VR; much better than PC games that were later ported into VR. 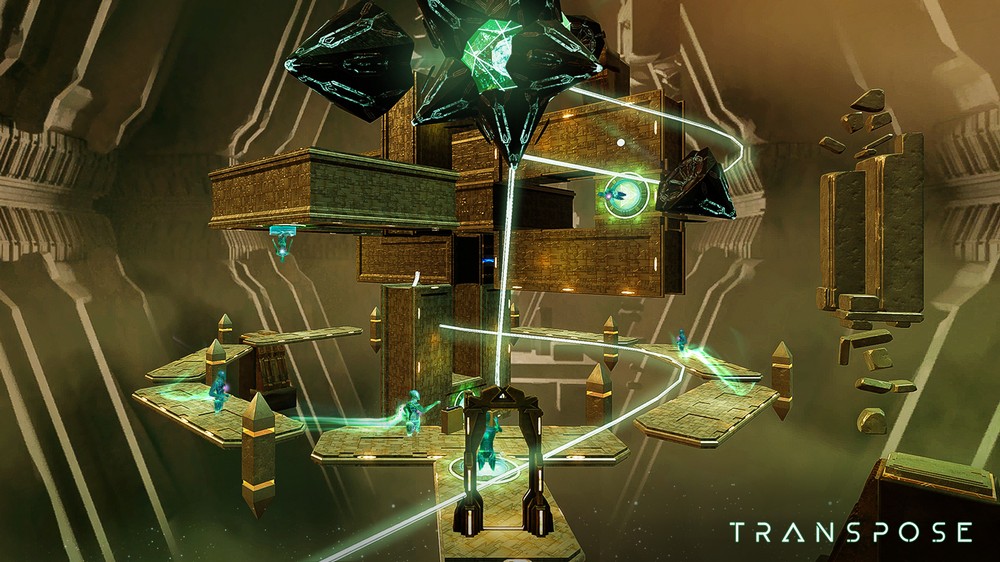 The core premise for Transpose is simple, as you are presented with a series of puzzles that require increasing amounts of thought and even some spatial awareness to solve.  One of the coolest methods of solving these puzzles is working with Echoes, basically live recordings of your previous gameplay allowing you to work in tandem with one or more versions of yourself to solve puzzles that would otherwise require multiple people.  A simple example from early in the game is I needed a cube from behind a force field.  The switch to lower the force field is on a distant platform, but when I flip the switch my bridge back to the unprotected cube is no more.  But by stopping time and triggering my echo I reverse back to the start of the puzzle and watch a replica of myself do everything I just did including flipping the switch while I stand right by the cube waiting.

That is the simplest example of the concept and it only gets more complicated as the puzzles get tougher and you start having to work with multiple echoes trying to get everything all synched up.  It even gets crazier when you start having to manipulate gravity and rotating the game world to suit your needs.  You can even walk on walls and ceilings as you explore 35 levels set across three distinct worlds.  The level of imaginative design with this game is off the charts. 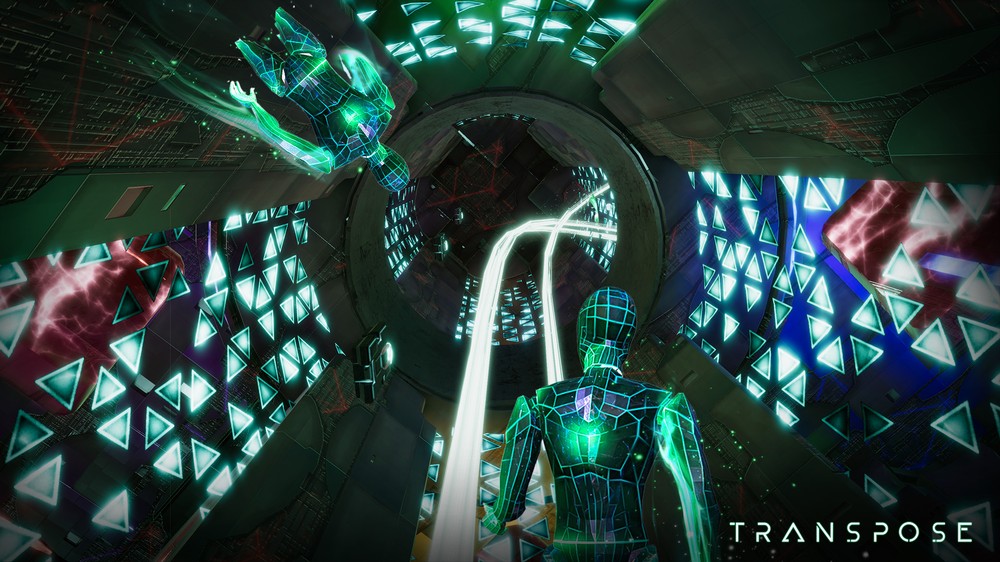 Transpose is a high concept game, which makes it difficult to explain with mere words; even screens and videos can’t do it justice.  This is the VR world design that was hinted at in that movie, Lawnmower Man; a world that will dazzle you with imaginative design and living color.  The stylized visuals are perfect for VR, and while I never got VR sickness there were spots of vertigo, which only shows just how convincing and immersive this game can get.  I played on both the Vive and the Rift and both versions were technically identical.  Transpose supports room-scale but doesn’t really need or use it and can just as easily be played seated.   I personally found the Rift and Touch combo played a bit better since the analog sticks are better suited for movement and teleport-jumping and item manipulation.

When it comes to working with recordings of your gameplay there are obvious comparisons to be made with The Talos Principle VR, but in many ways I enjoyed Transpose more.  The fact that it was designed for VR, both in gameplay and visual style made it a lot more intuitive and comfortable to play, especially in longer play sessions, because once you enter this virtual world it is very hard to leave.  Transpose invites you to get lost in its surreal design while challenging your brain to overcome some of the best logic and physics based puzzles you can find in VR.  Anyone with a Rift or Vive who loves puzzles needs to check this out. 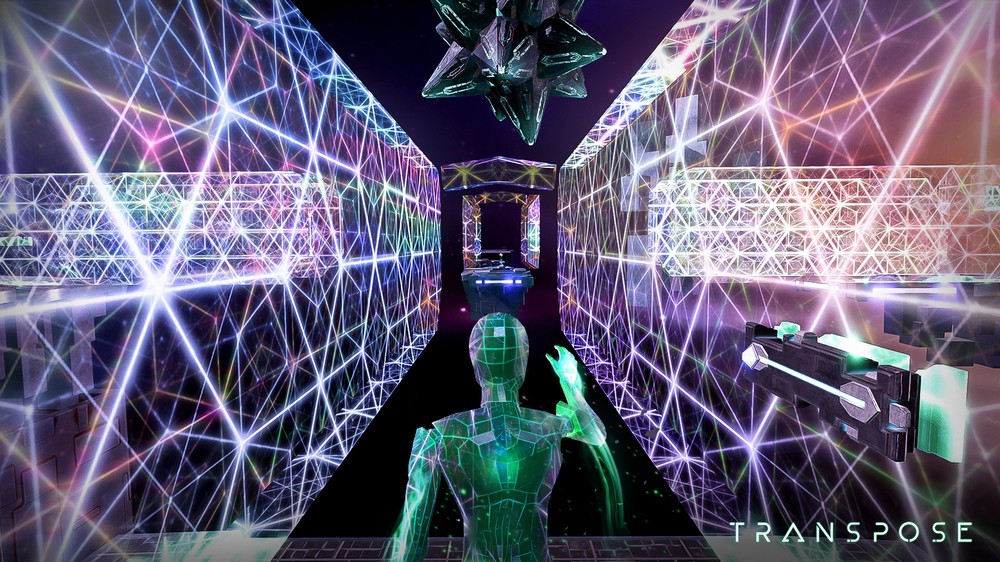 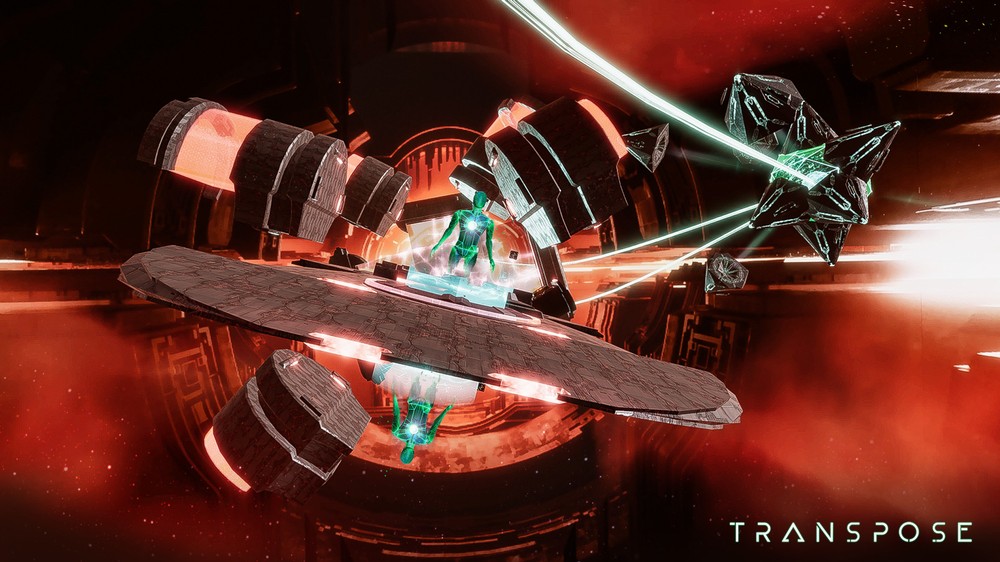 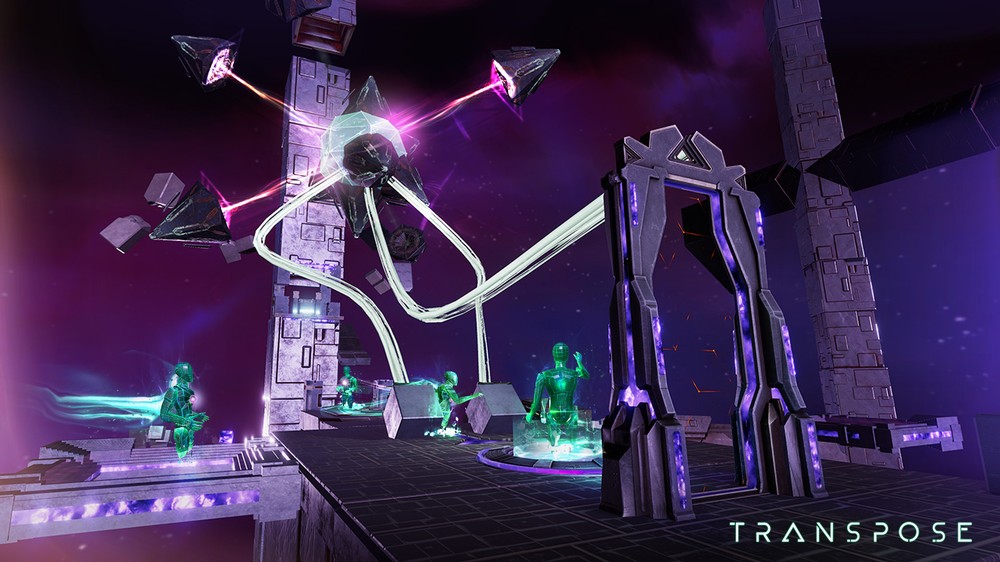 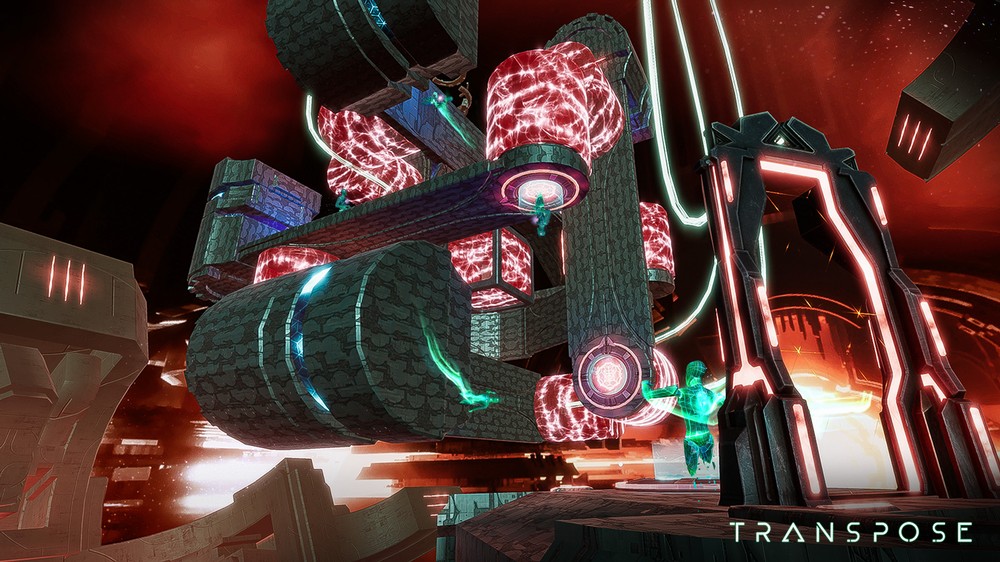 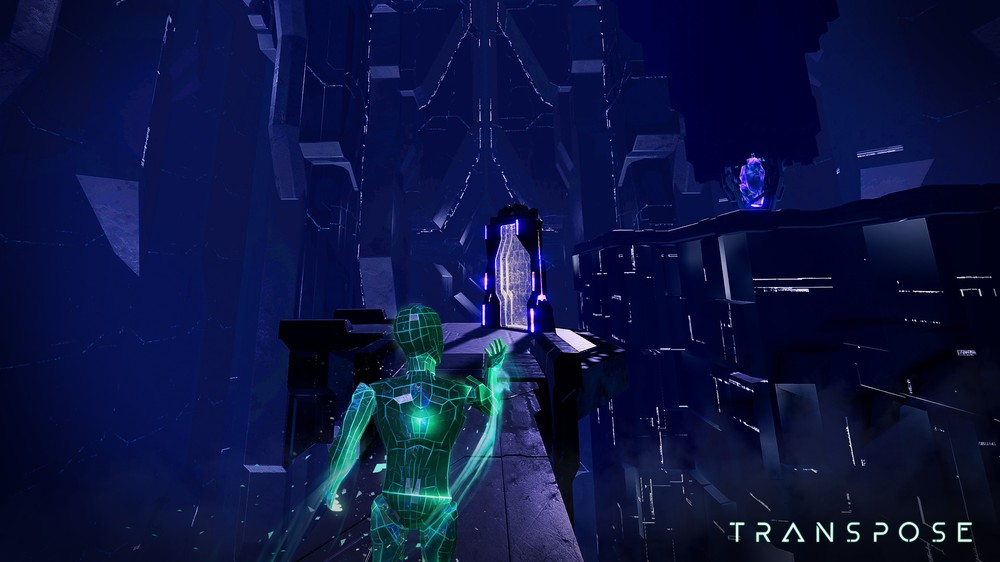 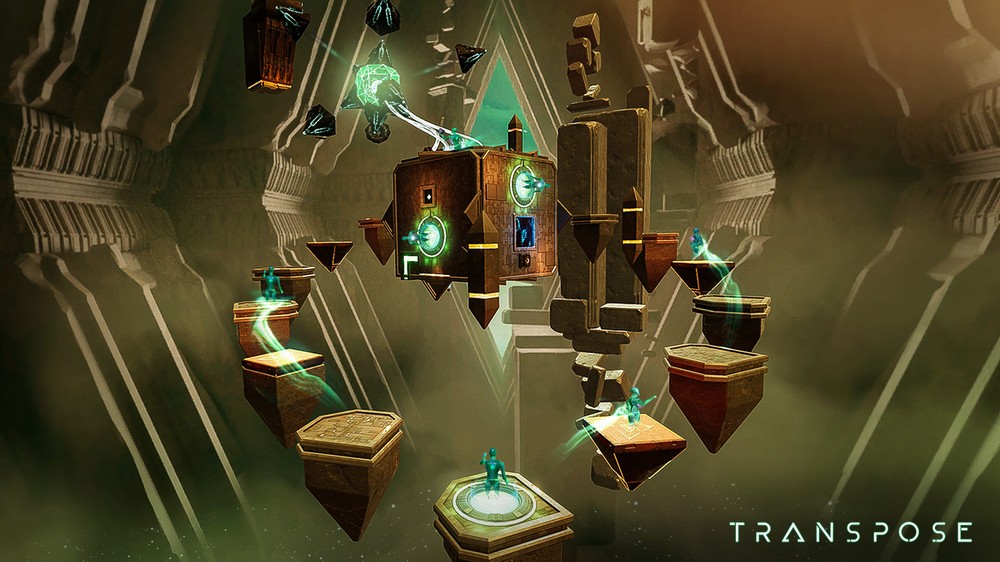 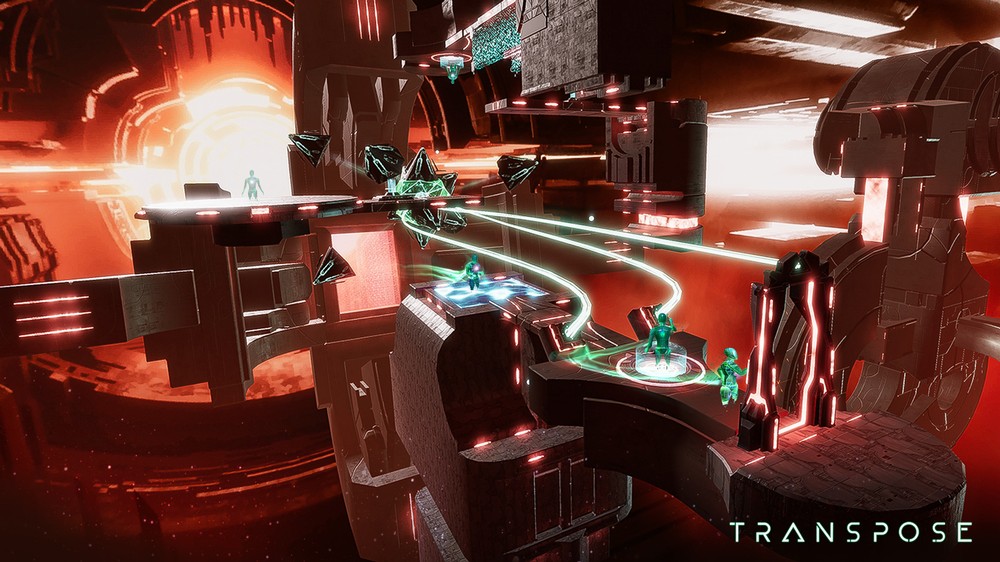