I encourage anyone with a drop of stealth blood in their system to check it out.

First I’d like to apologize for the tardiness of my review for Tom Clancy’s Splinter Cell: Blacklist. I was away on active duty when the game launched and just got back last week. Sadly, I wasn’t doing anything nearly as glamorous as Sam Fisher; at least as far as field work, but merely teaching a sniper survival class for a new generation of “Sam Fishers”. And not surprising, many of those in my class are big fans of the Splinter Cell franchise.

Splinter Cell: Blacklist takes Sam into a new generation of technology and gameplay despite its arrival in the final days of current gen hardware. While the console versions are certainly better suited for online multiplayer and co-op, at least when it comes to ease of access and a larger community, I opted to go with the PC version as I knew it would offer the most immersive experience as far as presentation; plus I have my own reliable crew of fellow gamers who are all PC savvy.

Blacklist is more than a subtitle; it is a list of high profile targets that are being targeted by The Engineers, a radical group of terrorists who have had enough of the U.S. acting as the “world police” and will carry out these attacks until the U.S. withdraws its troops from around the world. Now it’s up to Sam and his Fourth Echelon crew to stop the attacks and The Engineers. With more gadgets than James Bond and Ethan Hunt could ever dream of and their own private flying fortress HQ these terrorists don’t stand a chance. 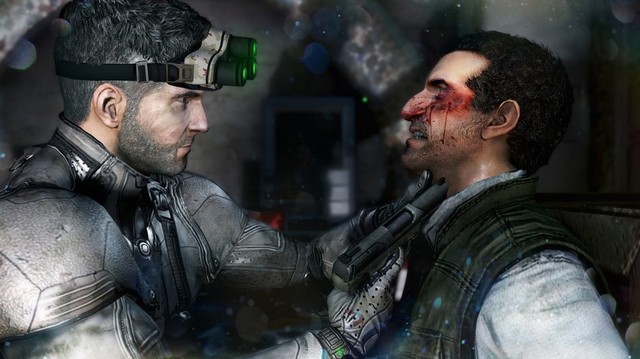 The story is surprisingly intriguing and even believable; definitely worthy of the Tom Clancy seal of approval. As expected, you’ll travel around the world to various locations, and even get a chance for a few ops in the USA. While not one of my favorite missions in the story, I did appreciate the familiar Chicago skyline as I invaded Navy Pier. The big change that resonated with me was the openness of the game’s presentation and the fully explorable and interactive menus, which were all cleverly disguised as systems within your command plane, the Paladin.

The Paladin is a character in and of itself, fully upgradable in ways that will enhance Sam’s abilities when he does go out on missions. You have a med bay, weapons lab, aircraft hangar, and even a dedicated hotline to your daughter, Sarah. You can call her between missions and the conversations are actually relevant to your recent actions. The most impressive part of your aircraft is the central command center where you can interact with various team members at their respective stations. Each person will give you access to various sub-systems and talking to them will unlock their own set of specific non-story missions and challenges. 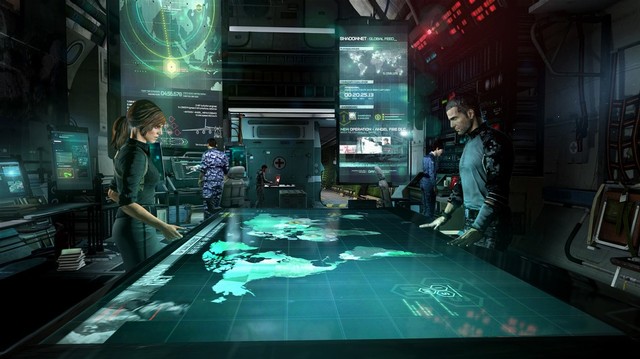 For instance, talking to Grim will enable you to upgrade the Paladin or activate her own set of stealth missions that are some of the most challenging in the game. These require ultimate stealth as any detection will fail the mission and force you to restart. Charlie’s missions are just plain brutal, especially if attempted alone. His missions require you to survive 20 waves of increasingly challenging enemies in a variety of assorted locations. In addition to surviving you’ll need to recover dead drops and subdue a few HVT (high value targets). It starts off deceptively easy with maybe five soldiers, but those numbers escalate quickly with dogs and armored soldiers getting added to the mix. You can extract and cash out every five levels but the longer you stay the greater your reward. There are also real-time events taking place as indicated by a ticker in the menu screen. Check those out for expiration times and dates as these offer some of the best cash rewards.

Splinter Cell: Blacklist also introduces new play styles. These are an interesting twist on the game but really didn’t affect the way I played the game. I supposed you could choose a style then purposely play to fit those confines, but I just played the game instinctively and enjoyed seeing how the game interpreted my decisions at the end. In other words – play the game…don’t let the game play you. The first style is “Ghost”, which basically means completing a mission undetected with no unnecessary kills. “Assault” is the exact opposite and basically has you going through killing everything that moves, essentially turning Blacklist into just another action shooter. “Panther” is the sweet spot of the three styles. It rewards your stealth abilities but you can also make the occasional kill. It’s up to you whether you hide bodies or use them to bait other unsuspecting soldiers.

That brings up AI. AI is pretty good in Blacklist but it can also be exploited quite easily. While it’s nice that guards will notice an open door that was closed the last time they walked by, or the fact that you can taunt guards by flicking the light switch or shooting out a light, just how many “Oh, a bulb must be out” moments does it take before they go to alert status? There were a few instances during Charlie’s survival challenges that I would stay in a room and take out entire waves of enemies as they would take turns coming into the room one at a time. I wasn’t trying to spam the glitch, but they were in a pattern that never let me leave the room. I do like the awareness indicator that shows the direction and growing level of alertness for any nearby enemies. 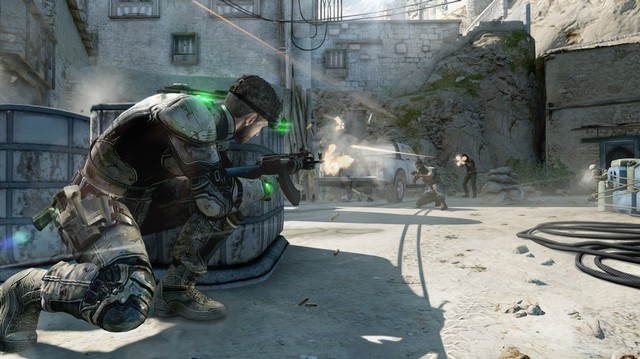 As far as the core gameplay, all the essentials are here. You have great movement and snap-to-cover and a quick-lock for aiming when you do decide to shoot. Performing stealth kills or multiple loud kills will fill your Mark and Execute meter, which allows you to tag multiple targets then kill them with a single tap of the button as long as they are in range. Again, this is a system that can easily be abused as enemies almost always appear in fours, so you tag three, take down the fourth and kill the rest with a single tap. I consciously avoiding using M&E, but I would always have the closest guys marked just in case.

Gadgets are a covert ops best friend and Sam has a lot to choose from and even more to unlock in the robust equipment screens. Everything from sticky cams to shock and smoke grenades to the new tri-rotor drone that can be upgraded to shock and even self-destruct killing a group of enemies will all help Sam keep a low profile. You can also purchase new weapons, some from the black market with appropriate plane upgrade, and upgrade everything; even Sam’s suit right down to the gloves and boots. Purists will want to purchase all the camo schemes then equip to match the theme of your destination. The level of upgrades is staggering, and it all helps in enhancing whichever style of gameplay you have chosen.

While Sam is a force to be reckoned with on his own, much of the content in Blacklist can be played cooperatively, and when done so with the right partner will be some of the most engaging gameplay you have ever experienced. If a mission says it can be played co-op or solo it was most often created with co-op in mind, so expect a much greater challenge if attempted alone as the parameters do not adjust. You can access all story missions, co-op challenges, and Spies vs. Mercs multiplayer via the central command screen on the Paladin in a very cool map screen than can filter your desired content. There is even a mini-game of sorts you can play on the map screen that has you chasing a target around the map using a series of “Where in the World is Carmen Sandiego”-style clues. 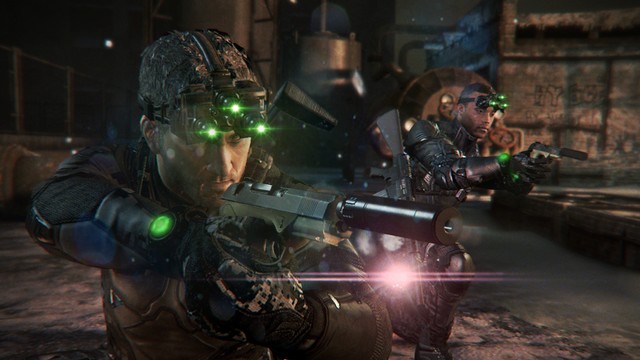 If you though the co-op was great, wait until you sign on for the 4-on-4 team based multiplayer Spies vs. Mercs, which has now been upgraded to include spy-style objective-based games in addition to traditional deathmatch. Those familiar with this online mode will already know how much fun it can be to choose your side and your play style, and rise up through the ranks. Again, I’m sure this is much more accessible on consoles, but there is a thriving PC community, and given the extra effort it takes to organize and communicate on the PC, I’m guessing they are more dedicated as well.

Visually, Splinter Cell: Blacklist is one of the best looking games I have on my PC ranking right up there with Crysis 3 and Battlefield 3. There is optional support for DX11 and the difference in quality is staggering. I spent way too much time wandering the Paladin, marveling in the lights and screens with realistic data or studying the fine mesh in Sam’s suit. Once I was actually out in the field I was stunned by the realism in everything from urban locales to palatial mansions, Chicago, London, and more. Each new mission was more breathtaking than the last. The subtle integration of the augmented reality text overlays is also back to provide immersive mission details and the occasional nudge in the right direction. 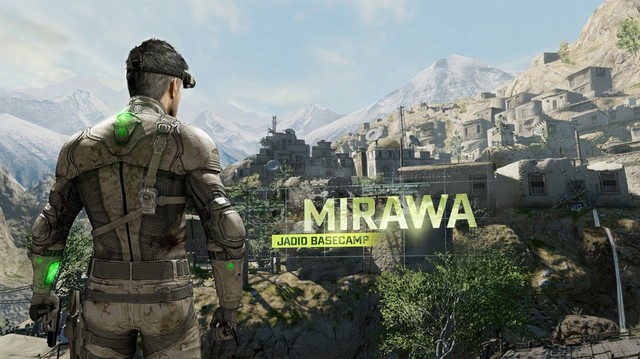 And now for the elephant in the room. Prior to Blacklist, Michael Ironside has embodied the role of Sam Fisher. In their desire to “reboot” the franchise, Ubisoft has replaced him with Eric Johnson who does a fine job, and if this is your first Splinter Cell game you won’t be disappointed, but for everyone else who has been along for the ride since Ironside gave voice to Sam in 2003, it takes a few hours to get used to Eric’s interpretation of the character. The same can also be said for Kate Drummond who is now doing the “voice in your ear”, Anna Grimsdottir, but up until now Grim has always been this disembodied voice – she now has a more significant role. New cast choices aside, the rest of the voice work is exemplary and the sounds for weapons are spot-on realistic. Gadgets make suitable buzzes and beeps and keyboards clack away as you hack laptops. The soundtrack by Kaveh Cohen and Mike Zarin conveys the perfect amount of suspense and action and is expertly used to enhance the gameplay.

It’s obvious that Splinter Cell: Blacklist is clearly designed for the widest audience possible from its unique trifecta of play styles to its open-ended structure of mission presentation and solo/co-op offerings. Solo gamers will enjoy 6-8 hours of quality campaign missions and another 10-12 of challenging side missions, while co-op gamers and spies and mercs will be playing this for months to come. Once you get past the loss of Ironside you’ll realize this is likely the best Splinter Cell game since the original, ten years ago. It’s definitely going on my GotY nominee list, and I encourage anyone with a drop of stealth blood in their system to check it out. 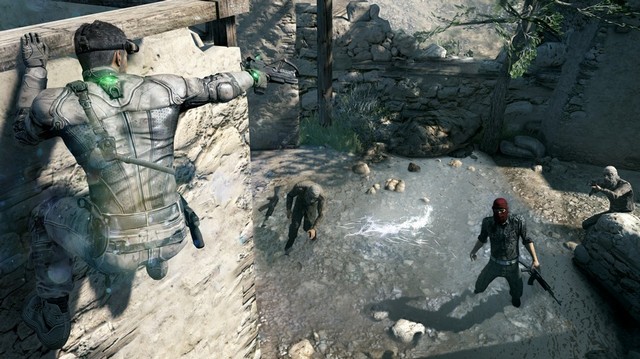 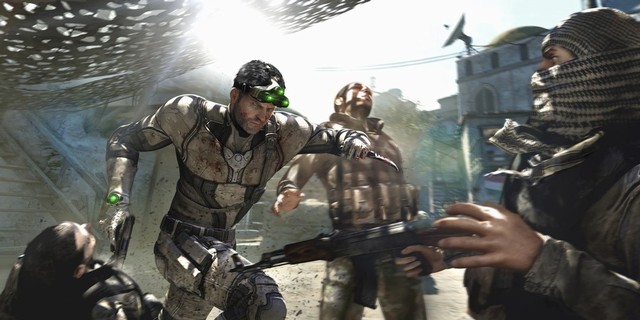 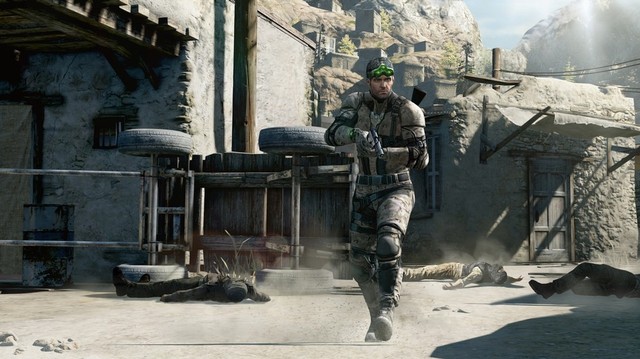 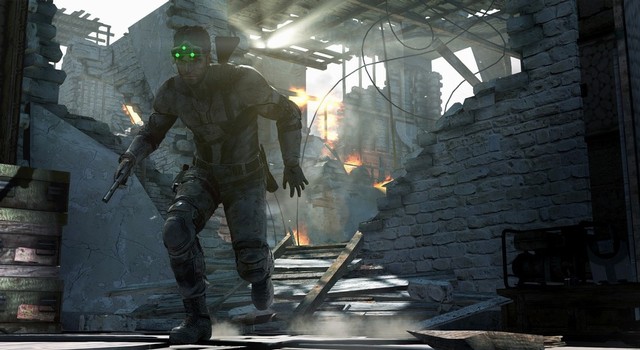 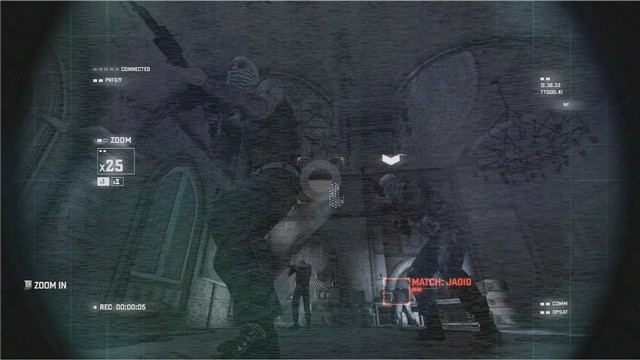 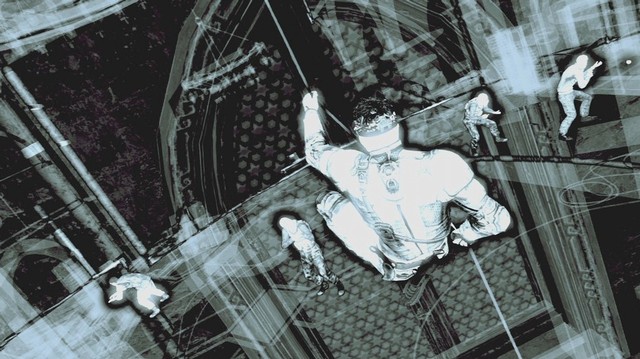 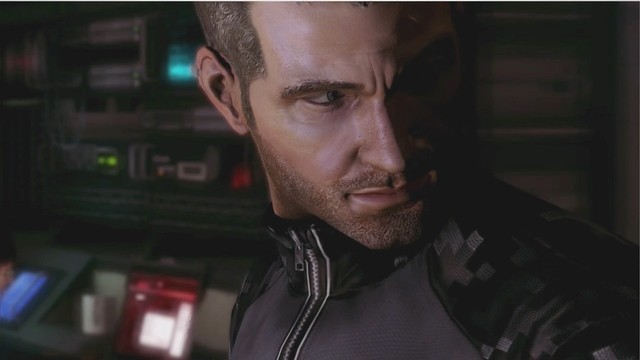 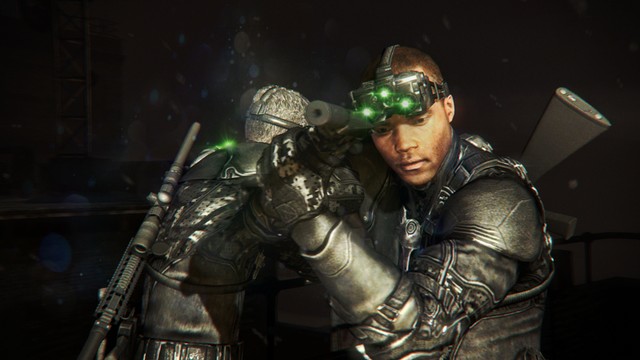 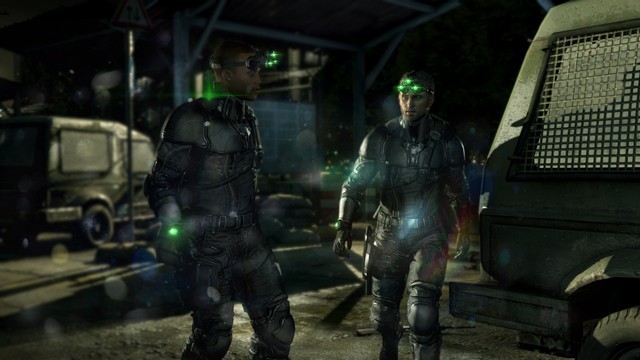 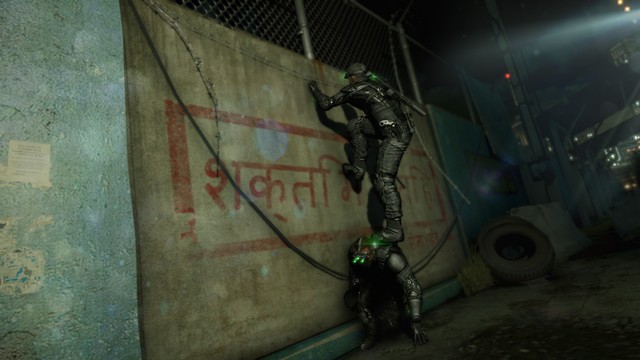 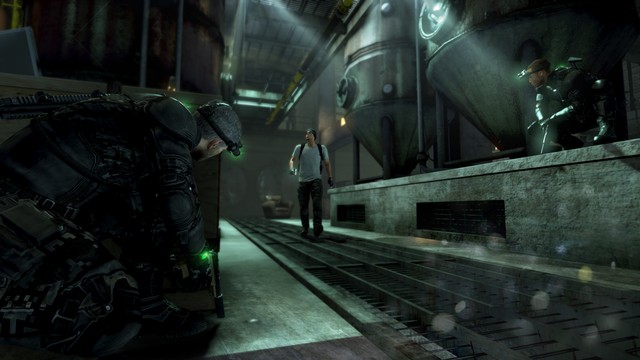 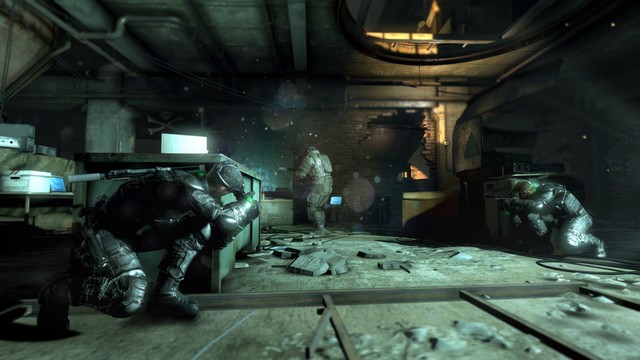 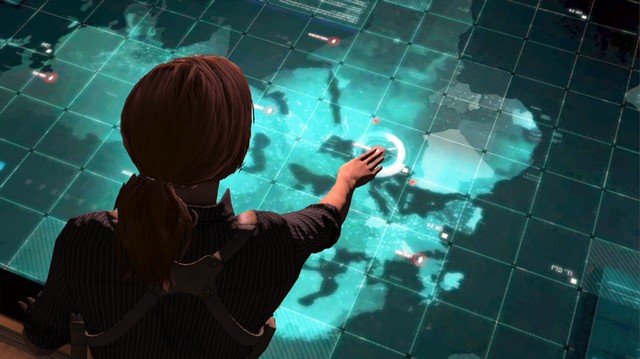 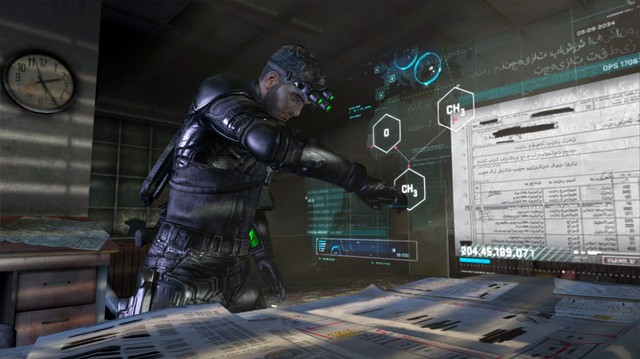 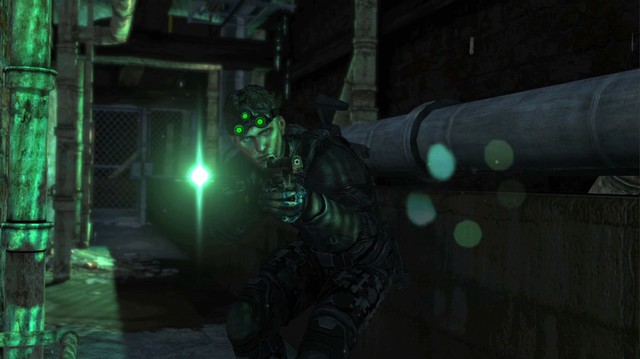