Through the Darkest of Times Review – PC 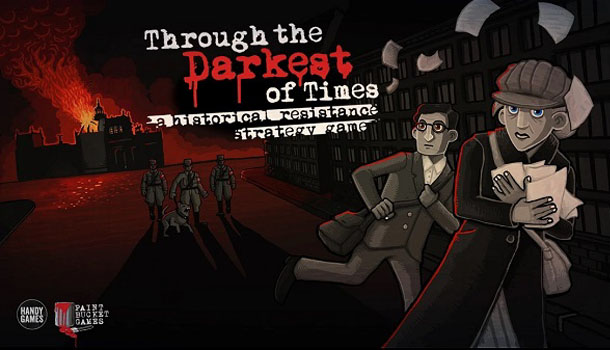 + Strong sense of responsibility for your team
+ Great at provoking atmosphere

- A few bugs
- Might be too slow for some

Great at making you feel like you’re struggling against the odds.

It’s pleasing to think that we’re in an era where videogames feel as if they can say something. With definite modern-day political parallels, Through the Darkest of Times tells the story of a small band of resistance members struggling against the rise of the Nazi Party in 1930’s Germany, and how they balance their personal lives and the safety of themselves and those they love against the desire to do what’s right for their country, and to protect targeted minorities against the terrors of state-controlled oppression.

Through the Darkest of Times plays like a mixture of genres, part management-sim, part point-and-click and part choose-your-own-adventure, you play as the leader of this particular group of partisans, recruiting new members, organizing strategies and sending people on missions to spread your message, raise funds, or strike out against the Nazi Party. If you’ve played This is the Police, or even the management parts of some of the Assassin’s Creed games, you’ll have an idea of what to expect. Each member of your team has their own strengths and weaknesses, and each mission has requirements for which type of person will perform best in them. It’s up to you to decide who does what, and to balance the strengths of your teams against the needs of the group as a whole. 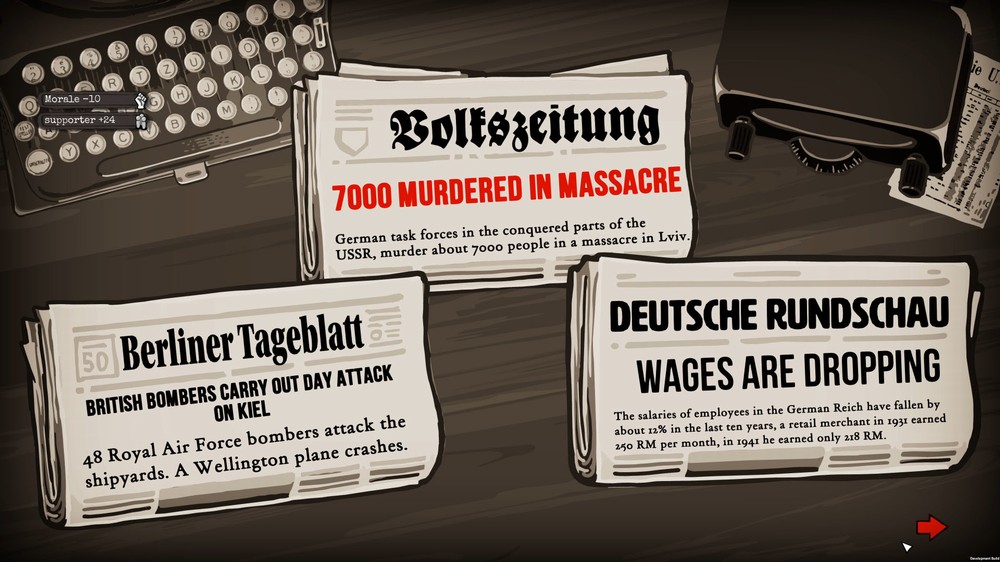 While you’re taking care of all this, you’re given brief news snippets as to what is going on in Germany at any particular time, and you’re also given the chance to experience some well-known events, such as the burning of the Reichstag, the opening of the Dachau concentration camp, and the 1936 Olympics in Berlin. The gradual erosion of individual rights is highlighted on the front pages of newspapers, and each week you are given an update as to what is happening in Germany. It’s an interesting feeling, as not only are you reminded that these things actually happened to real people, but it highlights the slow creep of totalitarianism, and how a seemingly innocuous headline when viewed in isolation can have larger, far darker repercussions down the line.

The headlines and events highlighted within Through the Darkest of Times are only the tip of iceberg when it comes to the oppressive and depressive atmosphere within the game, however. You’re constantly struggling to keep supporters and party members onside, you’re almost always short of funds, and it doesn’t take long for the Gestapo to get their sights on your group, meaning that you have to pick and choose your battles carefully. There’s a constant feeling that everything is always teetering on the edge of falling apart, and when you see headlines outlining some of the more egregious Nazi Party activities, handing out pamphlets on a university campus or trying to recruit union workers feels incredibly futile. Still, you keep plugging away, even as your resistance group starts to distrust one another, and even as arrests start to thin your numbers. 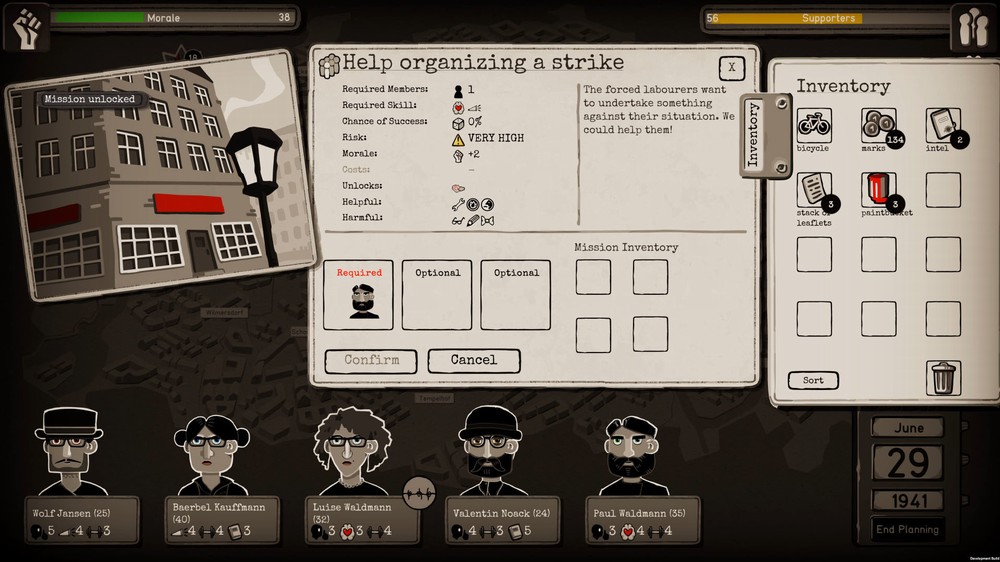 If you’re more interested in the history than the gameplay, Through the Darkest of Times does offer a Story mode, which promises to remove a little of the challenge. You still need to be careful in this mode, though, as your group isn’t immune to arrest, but you’re given a little more breathing room and it feels like your supporters are a little more generous with their donations. It seems like there’s a higher percentage chance of success on your missions as well, which makes the whole experience flow that much more easily.

Through the Darkest of Times is developed by Berlin-based Paintbucket Games, and unfortunately it was apparent early on that this was developed by a team whose first language isn’t English. Though the game is largely well-written, I experienced multiple instances of missed translations, where words were still in the native German. It’s easy enough to figure out the translation, but it took me a few instances until I realized that this wasn’t an intentional affectation and was indeed a mistake. I also had a couple of moments where missions would fail to complete properly, requiring me to exit to the Main Menu and reload my save. Thankfully, the game saves fairly frequently, but it was still frustrating to have to reload and set up my teams once again. 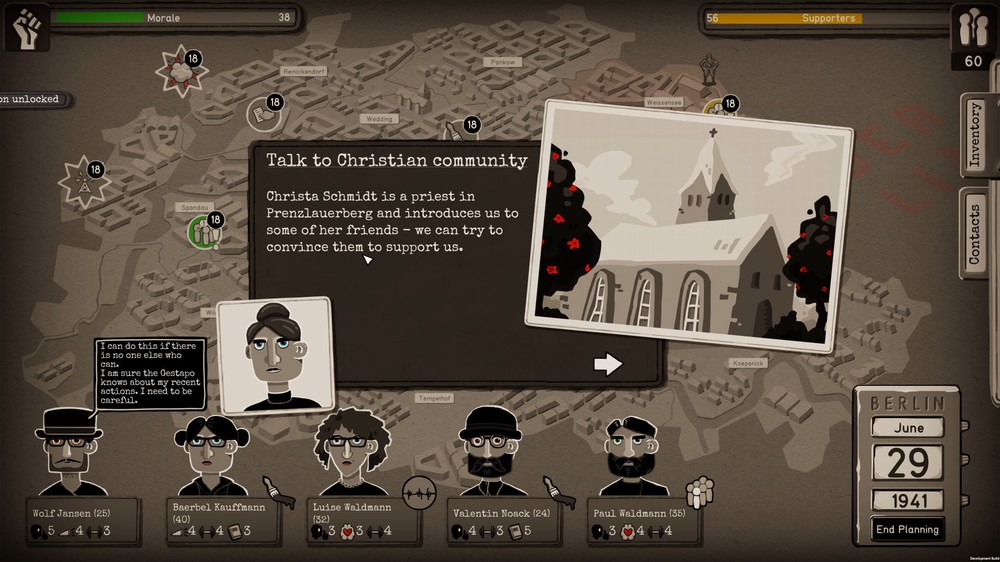 Despite the issues, Through the Darkest of Times does a great job of making you quickly feel responsible for your group members, and genuinely concerned for their safety. I had a few heart-in-my-mouth moments where I would send a particular individual out on a crucial mission, knowing that they were the best option, but also well aware that they had a high wanted level and that this could be the last I saw of them. Similarly, I was happy but also disappointed when one of my best members announced that she was pregnant and would have to leave the group. It’s funny that static 2D profiles could evoke such reactions from me, but it goes to show just how well Through the Darkest of Times makes you care.

In all honesty, some players may find Through the Darkest of Times a little too passive for their tastes, as there’s little direct interaction with the game world. You mainly interact though selecting dialogue options and clicking on pictures of characters or places, and though there’s often a sense of necessity, there’s rarely a sense of urgency. Still, Through the Darkest of Times is great at making you feel like you’re struggling against the odds, but that your cause is just and any success is worthwhile. If you like this sort of game, or have any interest in the time period, then I would definitely suggest giving Through the Darkest of Times a try. Who knows, maybe some of the lessons you learn within might unfortunately become useful in the years to come. 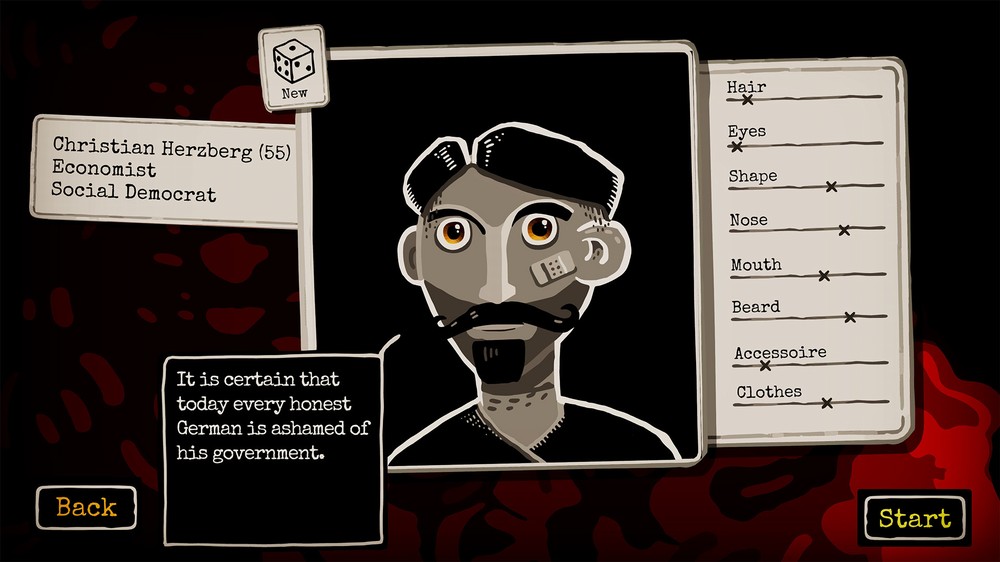 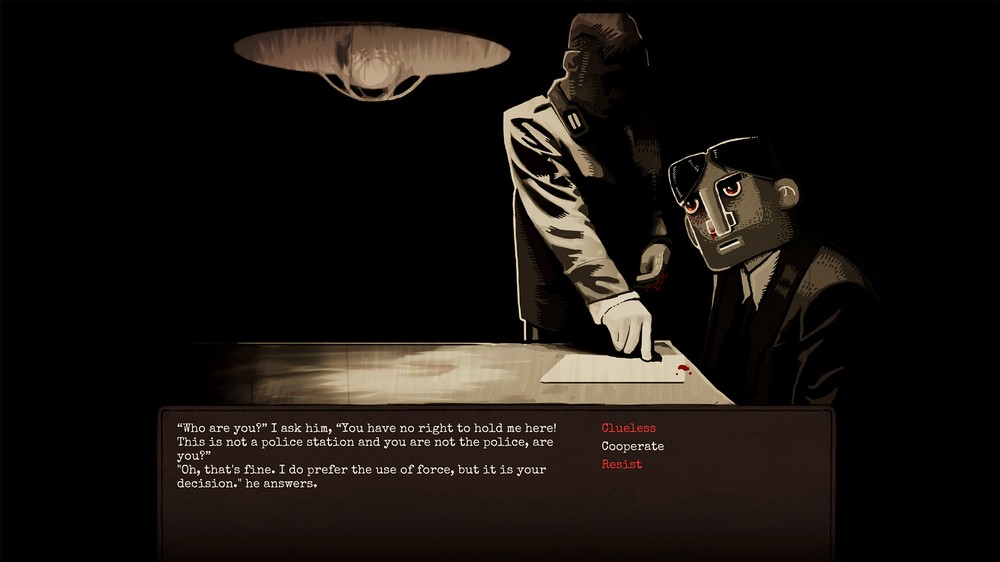 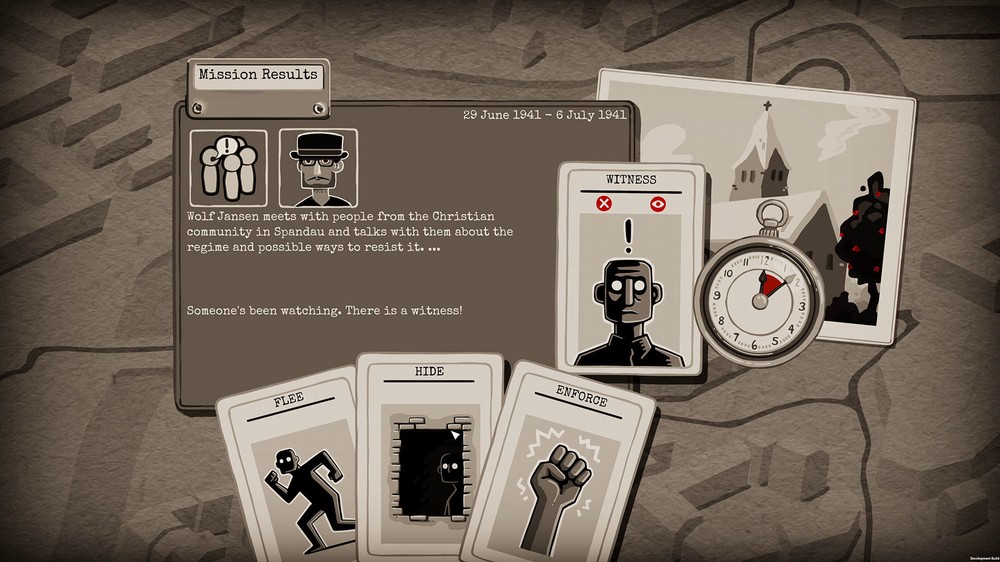 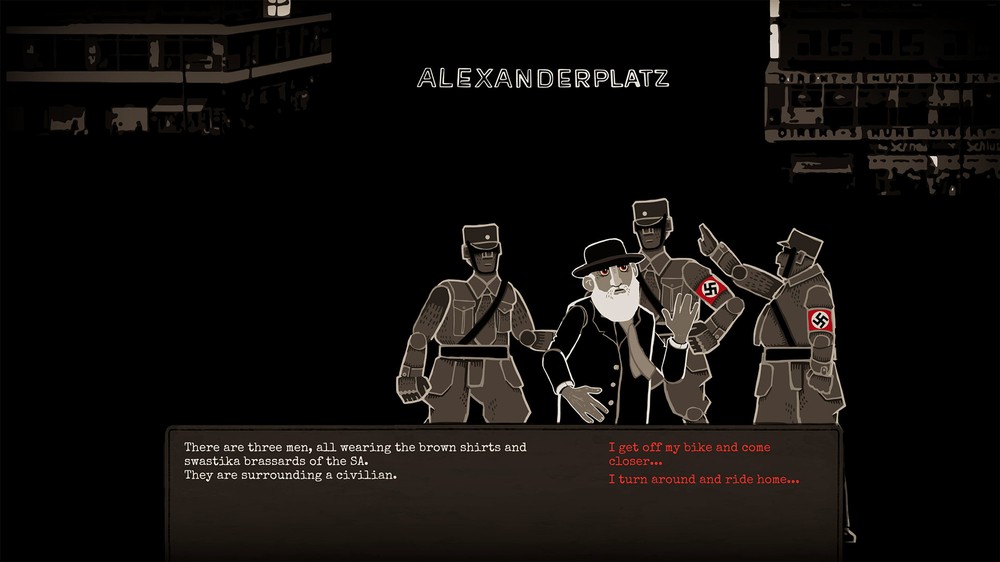 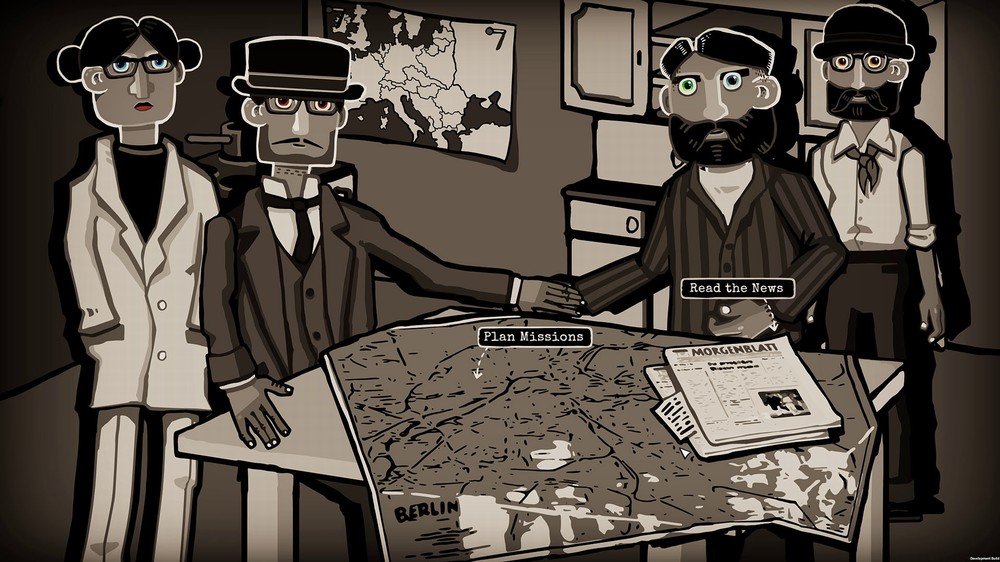 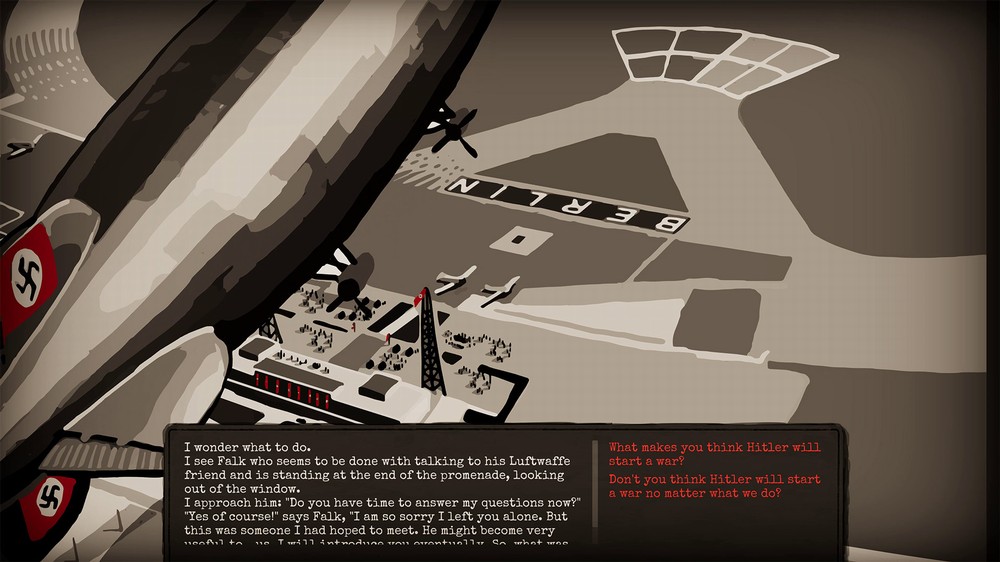 Set Out on the Adventure of a Lifetime in Classically Inspired Fantasy Action RPG — The Dark Eye: Book of Heroes

The Coma 2: Vicious Sisters Arrives for PS4 and Nintendo Swith on June 19