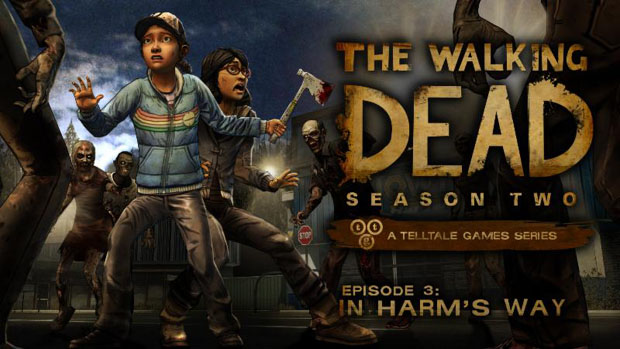 The narrative and pacing stalls out as we make our way over the mid-season hump.

Yes, it’s time for the third installment in Season Two of The Walking Dead video game, the episodic adventure that loves to torture us with multi-month waits between tasty morsels of content that we crave as much as walkers crave warm flesh.  “In Harm’s Way” picks up right after the events of the previous episode where Carver and his crew assaulted the ski lodge and took our group – or at least the ones that he didn’t kill – prisoner.  Our gang is tossed into the back of a truck and driven off to a big box hardware store where Carver has setup a surprisingly functional, albeit prison-like society.

The overall tone for this mid-season hump is dark, depressing, and oppressing.  Carver is all about making rules and enforcing them with the help of a few loyal followers.  If you misbehave you are cutoff from the core group and forced to prove your loyalty through hard work to be allowed back into the inner circle.  Clementine and the rest of the gang are put into an exterior holding area (lawn and garden center) with a few of Carver’s own outcasts, and that is where the game pretty much kicks off. 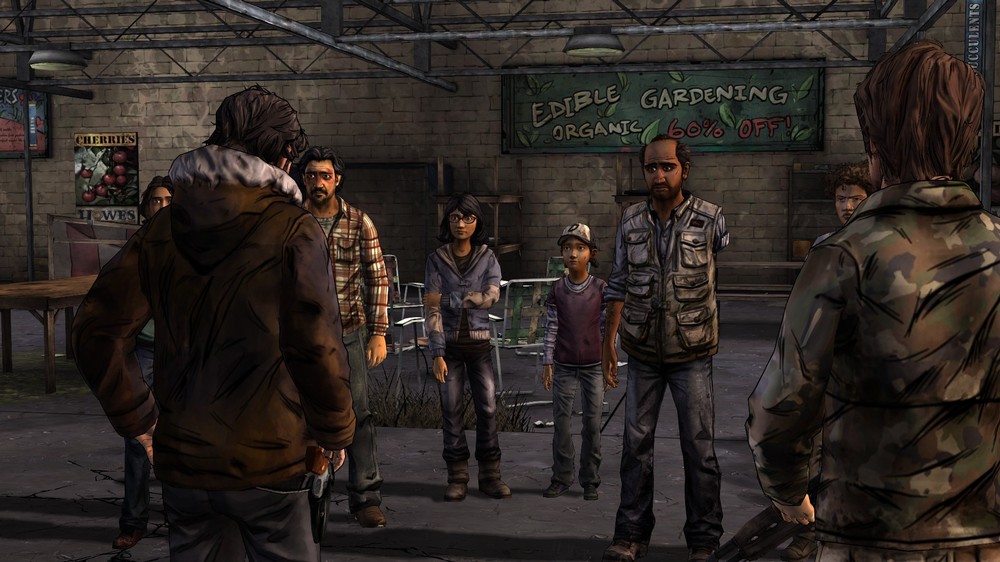 As always Clem is the one that gets to do all the “heavy lifting” so to speak despite being surrounded by seemingly capable adults.  She’ll get to talk to everyone and search the various new locations for clues and items to interact with as well as make some fairly important decisions for the entire group.  There was a moment of remarkable realization when I actually felt like Lee was back in charge, as I watched her channeling the wisdom and guidance he instilled in Clem during Season One, even as far as her protective and nurturing attitude toward Sarah – if you so choose.

The game still presents you with a modicum of choices, although I was finding that no matter what you choose you almost always get funneled into the same outcome.  The core story is notably linear although the path through it can take a few momentary excursions into something unique.  This particular episode is a bit light in interaction.  There are lengthy sections where you simply watch events unfold then maybe pick a dialogue option and trigger another bit of exposition.  The moments where you have true freedom to move and explore were few and far between, and even then your choices were limited and mostly observational. 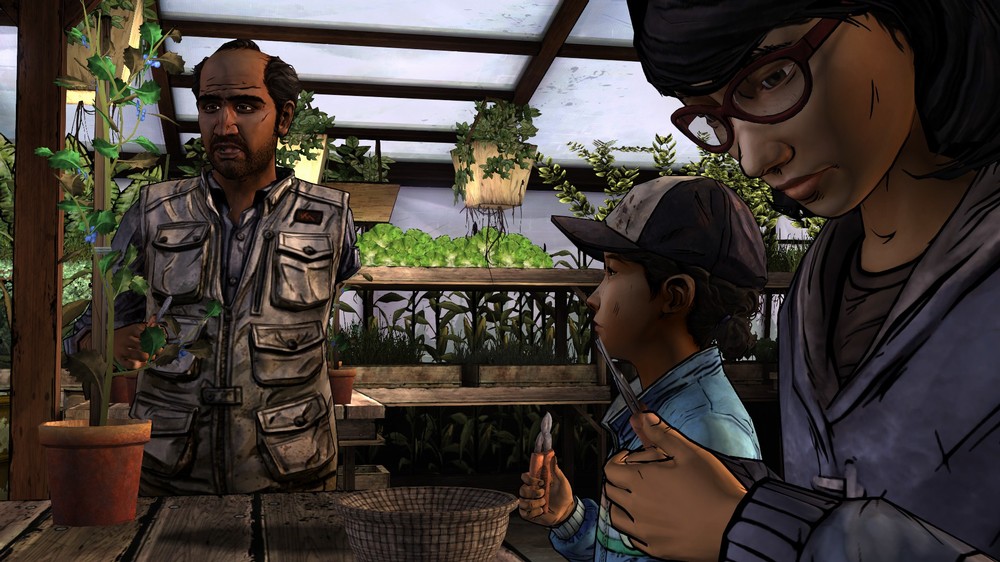 The entire episode spans only three days, one of which you are forced into doing chores like loading gun magazines or harvesting berries from a rooftop greenhouse.  Things get a bit more eventful at night as you sneak around setting up your master plan to escape Carver’s prison, but the simple fact is that nothing much happens in this third episode.  It’s just a lazy (and by that I mean casual or relaxing) sequence of point and click exploration and read and respond conversations that don’t really flesh out the story or the characters, but merely serve as two more hours of filler material for the season.  It will be interesting to see how or if anything that happens in this episode resurfaces in the final two.

As with the previous episodes, the graphics, sound and overall presentation are outstanding with interesting new environments and some great cinematic camera angles for exploration and action sequences.  The voice acting is pure perfection although I found the new character, Reggie a bit distracting since the character is modeled to look very much like his voice actor, Kumail Nanjiani, who I have been watching in the new HBO series Silicon Valley.  His voice is so unique I just kept getting taken out of the game whenever he spoke, which is a shame because he delivers most of the memorable dialogue in this episode.

Episode 3: In Harm’s Way reminded me of watching the TV series in that there is always that one episode each season that you could have done without.  It exists only because it has to in order to tie episodes two and four together.   If you were playing the entire season all at once – as many will do when this is released as a complete season – then Episode 3 is just a minor hiccup in your adventure, but when you’ve been waiting for months and now must wait months more for your next Walking Dead fix, In Harm’s Way is a bit of a letdown, but still a must-play installment in a must-play game. 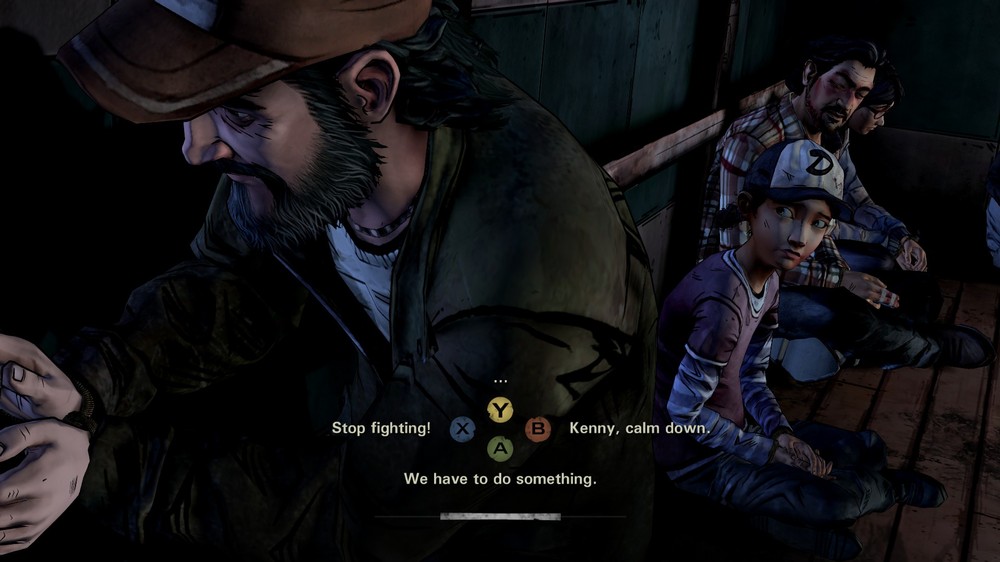 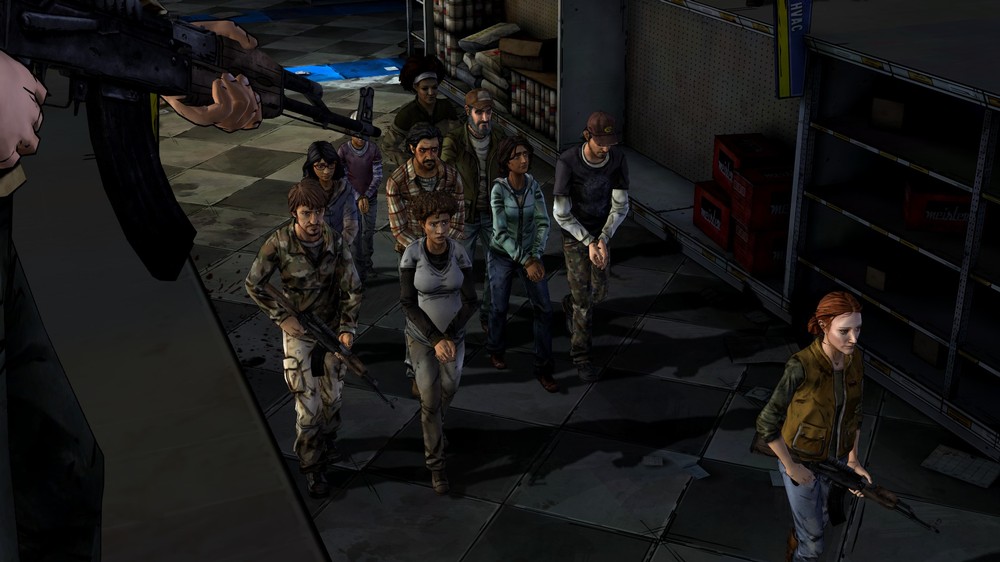 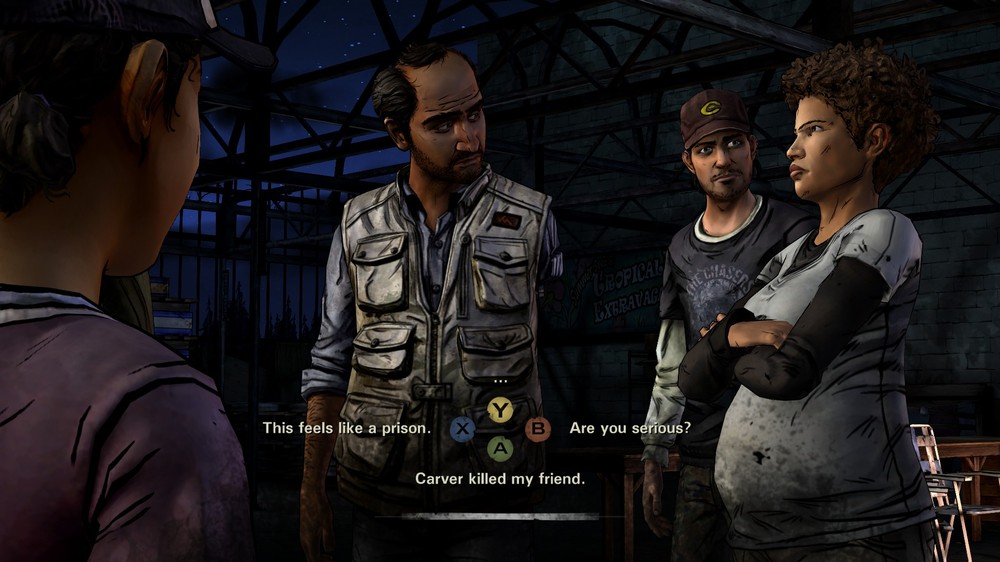 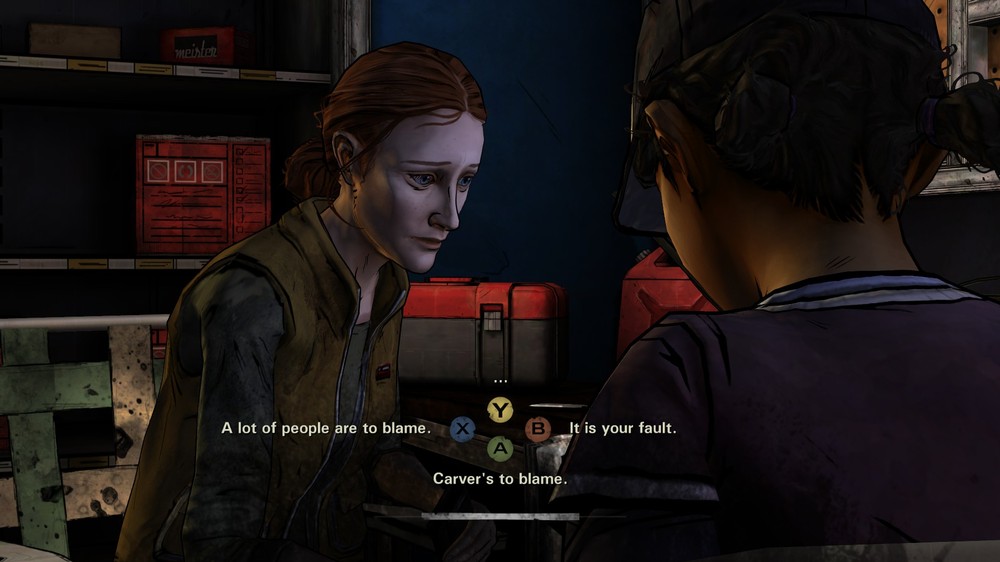 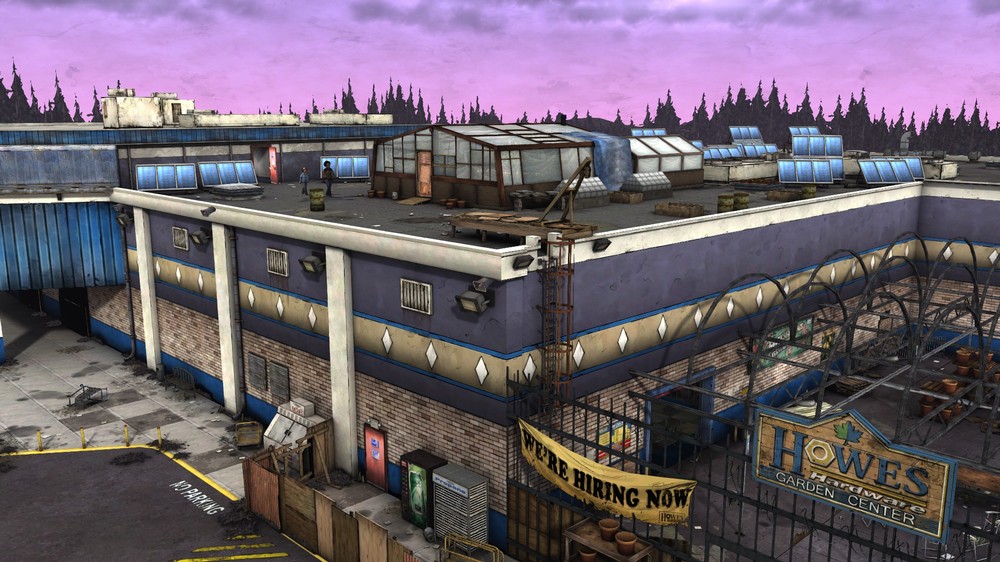 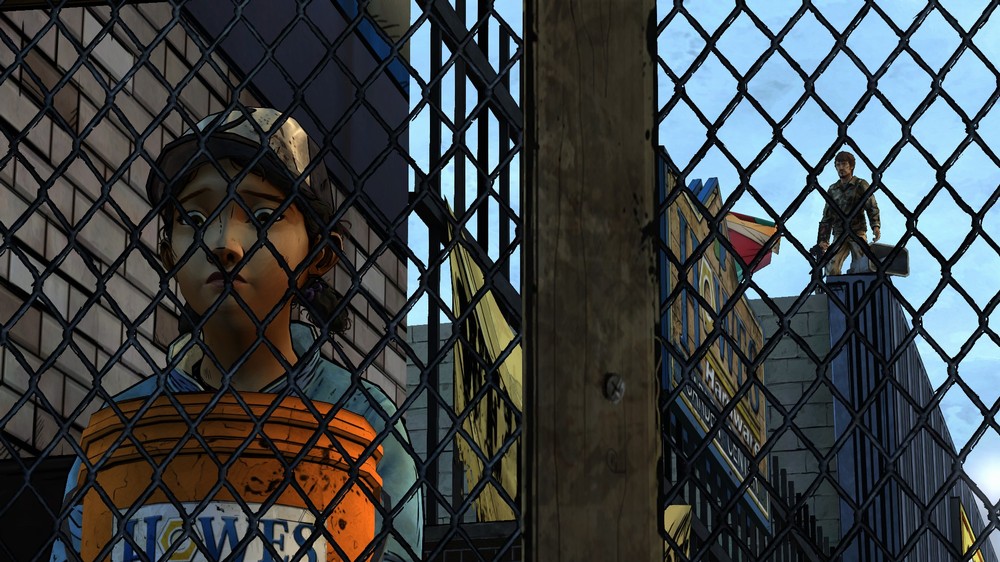 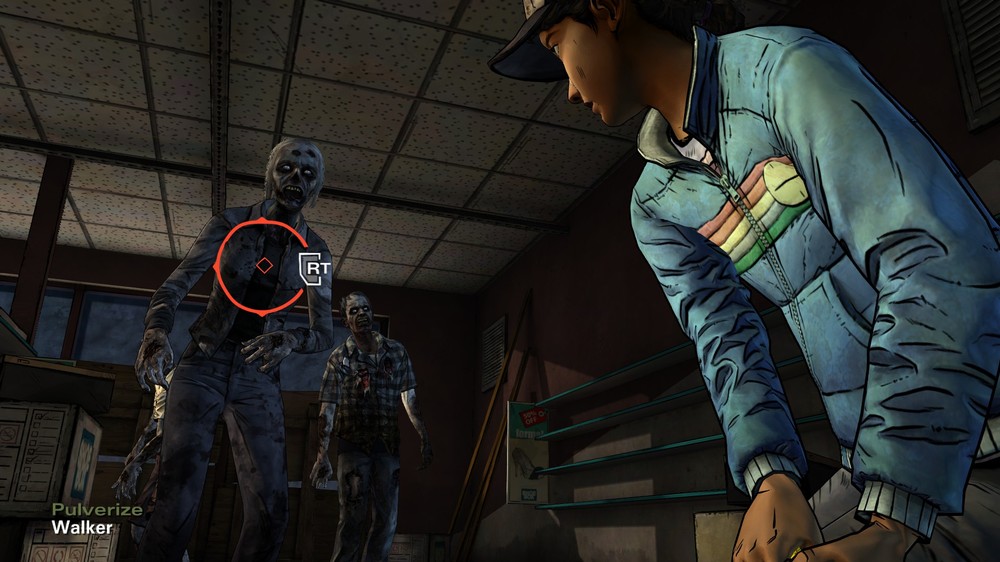 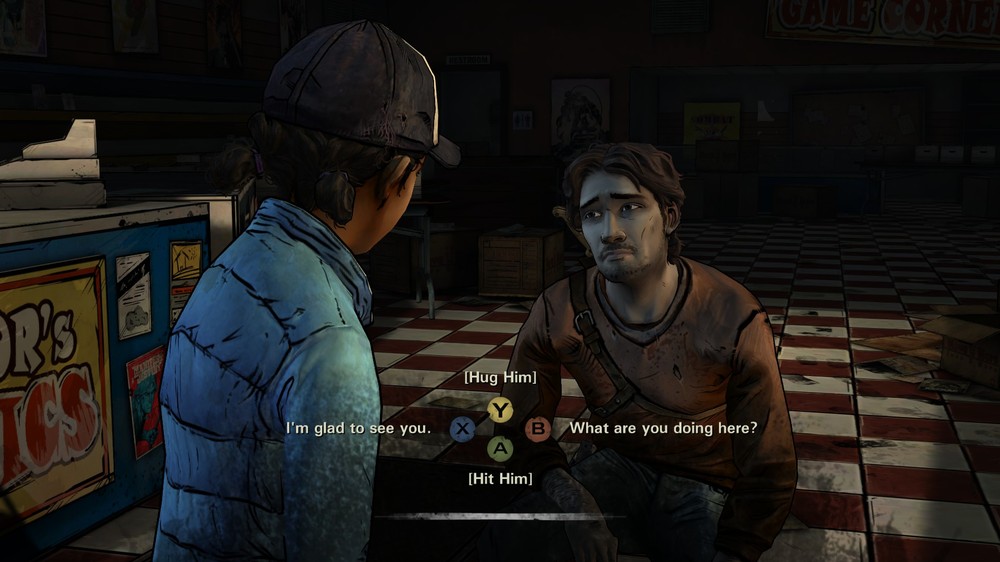 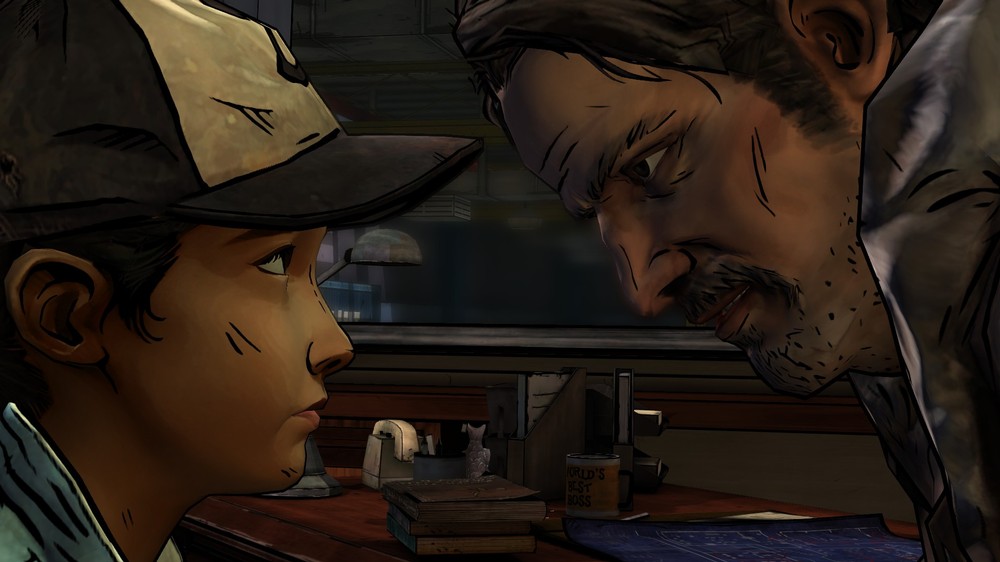 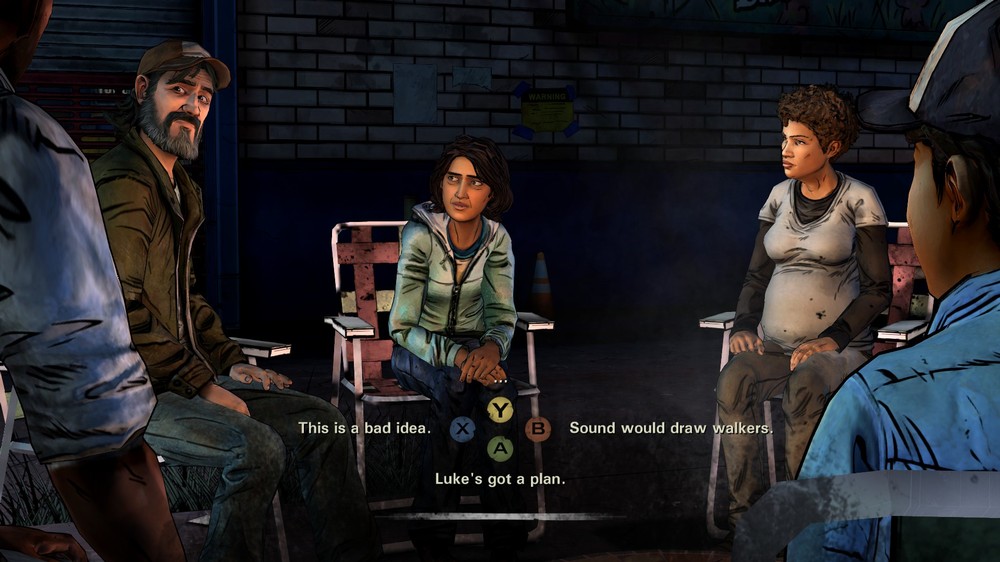 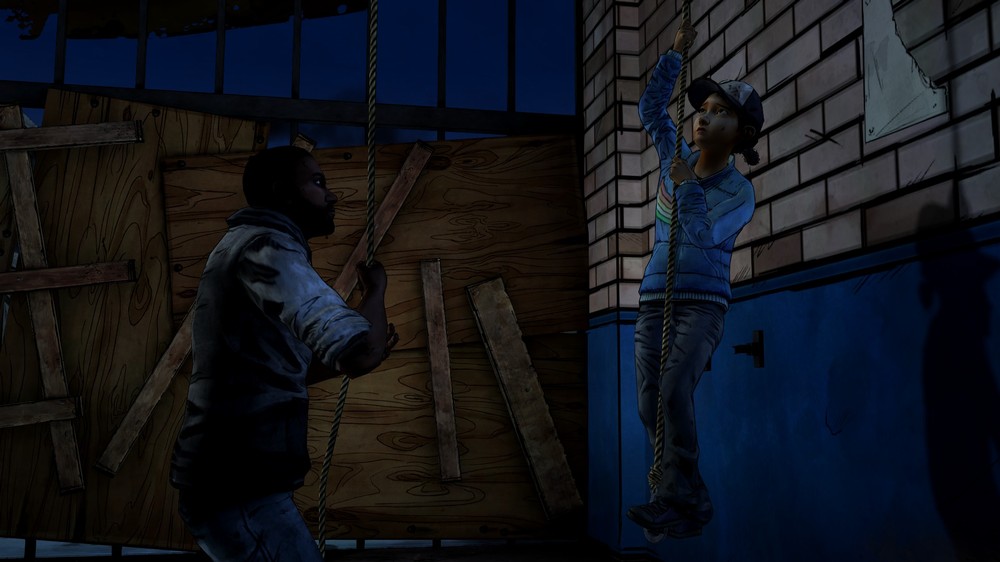 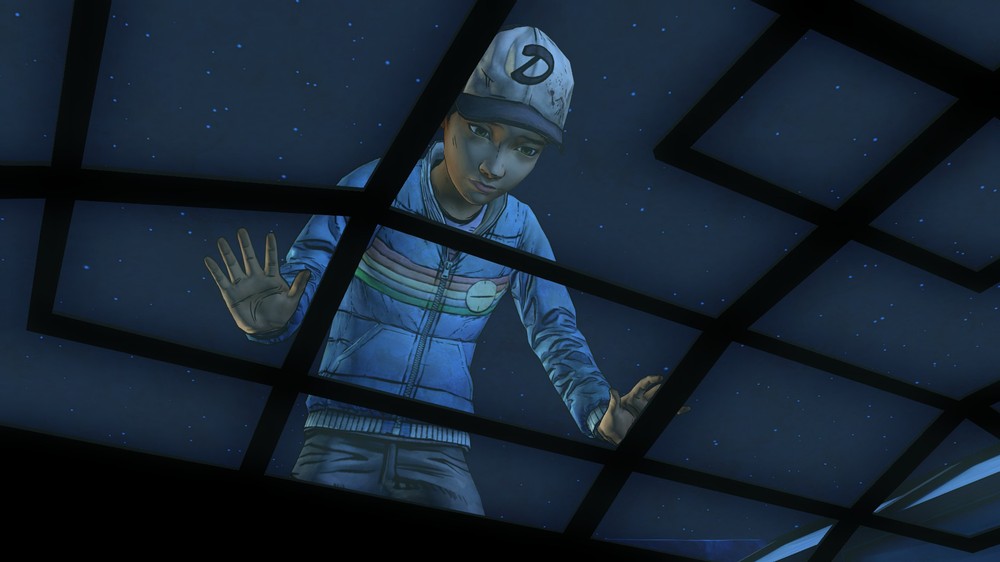 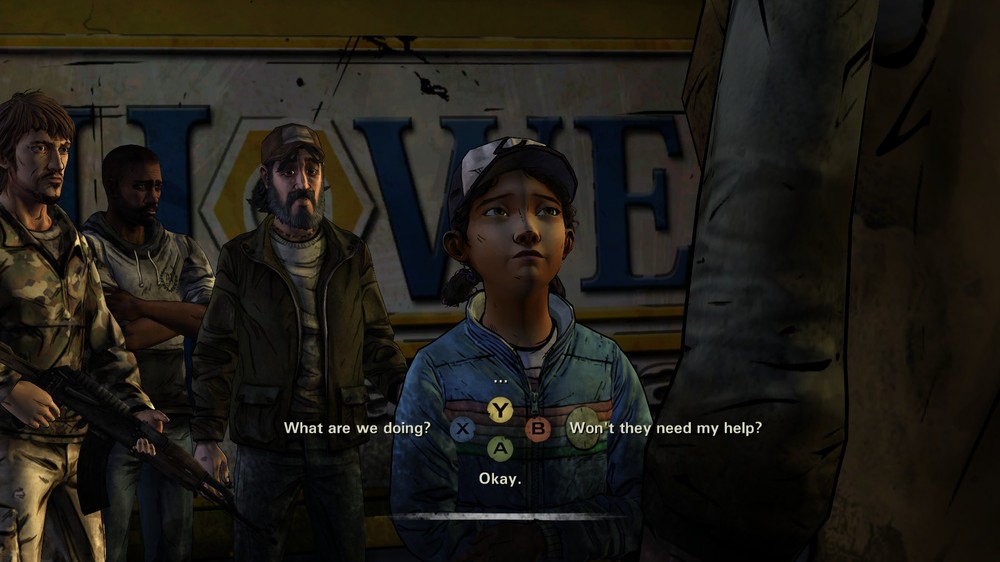 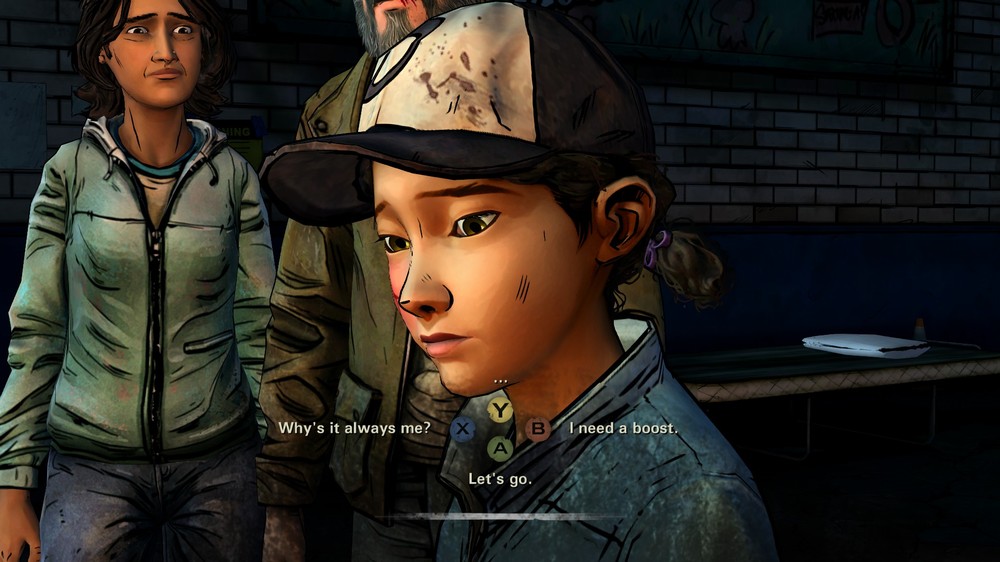 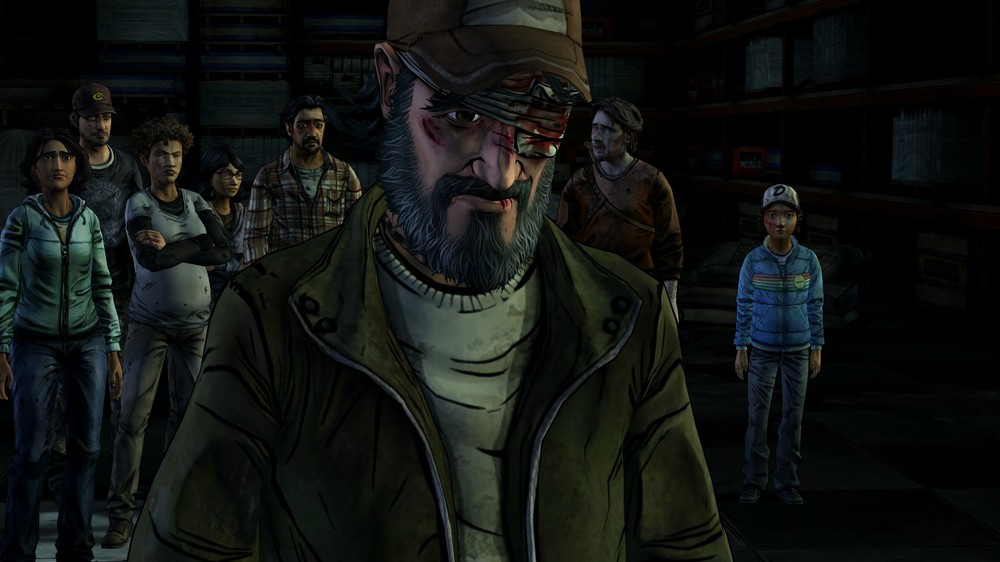 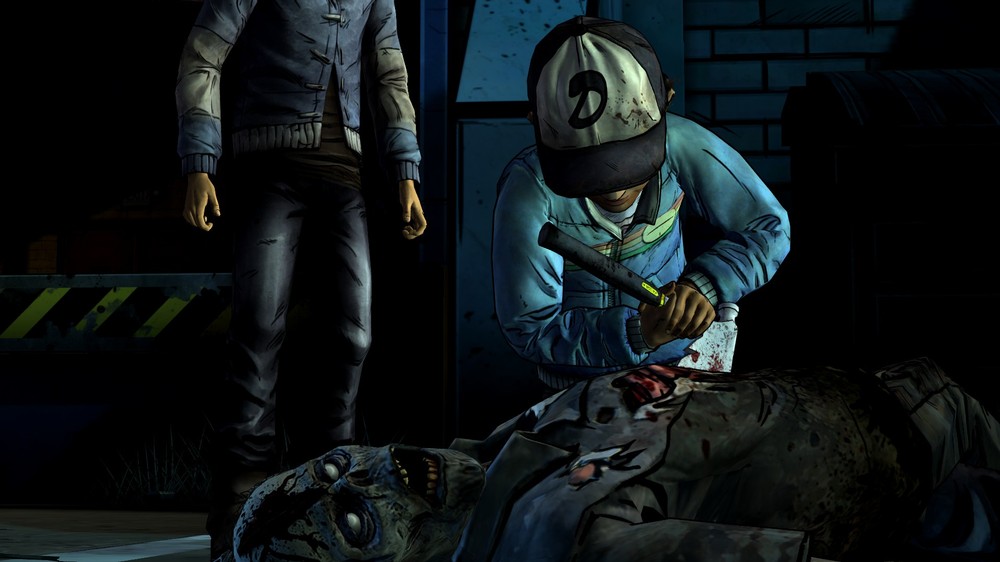 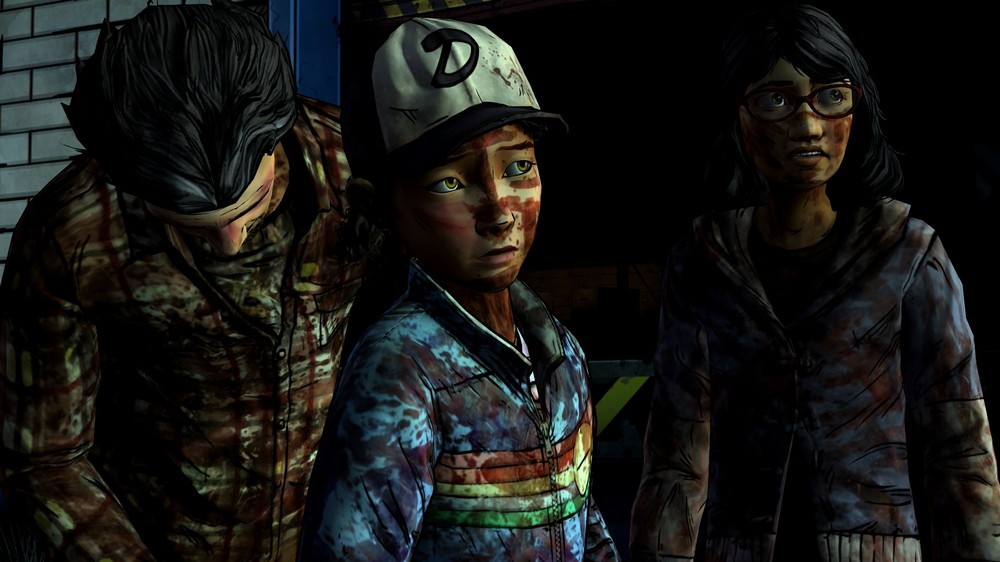 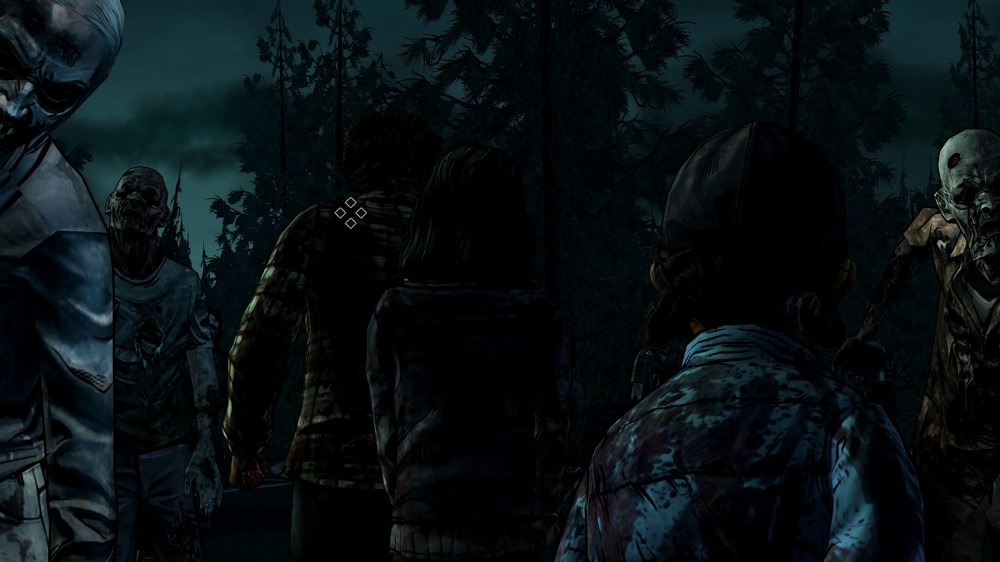