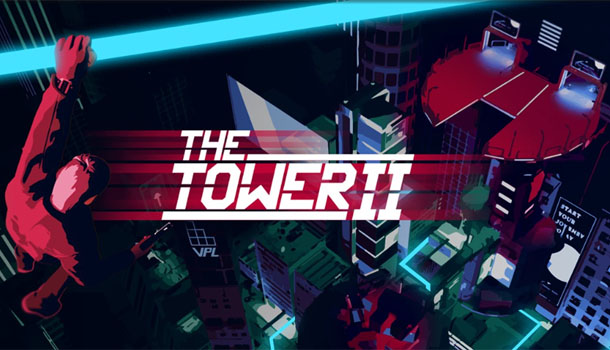 A pleasing mix of physical interaction and on-rails shooting with great style and atmosphere.

Next up in our year-end roundup of un-reviewed VR games is the summer hit, The Tower 2. I never played the original, but if it’s anything like this I might have to go check it out. What a fun and creative way to approach a VR action game while simultaneously maximizing engagement and minimizing motion sickness, all the while creating this clichéd 80’s action movie environment that blends elements of Terminator and Blade Runner. It also takes a new and more direct approach to the on-rails genre by literally putting your character ON RAILS, or in this case a moving conveyor belt not unlike those you find in an airport, only a lot more multi-directional and a lot narrower.

The Tower 2 offers up two modes of play, the 80’s sci-fi story mode sans story, and the more engaging and long-term mode, VPL (Virtual Parkour League) complete with leaderboards and objectives. But the best place to start would be the short and very useful tutorial that will prepare you for what’s to come. In this follow-the-leader lesson you’ll mimic the mannequin ahead of you as you learn to keep yourself centered on a very narrow moving conveyor belt that twists and winds through the virtual skyline. You’ll learn to sidestep to adjacent belts, grab overhanging cables, zip line, and most importantly duck and lean to avoid physical obstacles in your path. Learning the basics is important because once in the real game they will start throwing all of these elements at you in some surprisingly energetic combos. 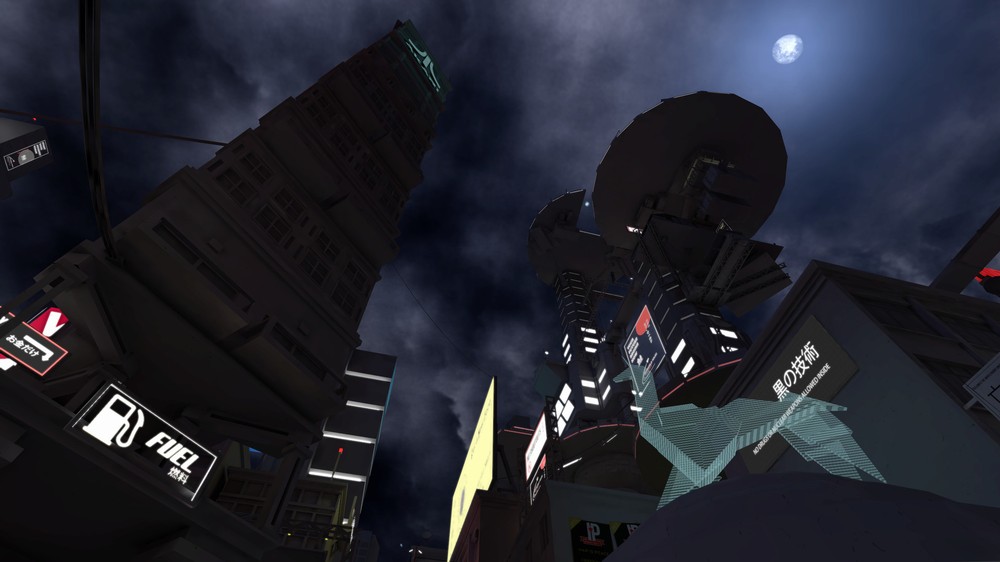 Jumping into the story mode you’ll find a 30-45 minute linear action sequence where you ride the blue conveyor belts through a Blade Runner-inspired cityscape as you race to the last human shuttle to take you off this Terminator-infested planet. What starts off as a rather simple (and potentially boring) ride-along gets good fast when you are provided with pistols and deadly flying assassination-bots to shoot down along with crazy traversal elements that, while automated, are still quite engaging. There are jump points that will spring you up, often require you to duck or even grab a handle before landing. There are numerous obstacles to force you to duck, lean, or twist your torso, always mindful not to move your feet lest you step off the conveyor belt.

Your automated trip takes you from the street level to the rooftops and even inside some buildings. You’ll even get to grab onto a drone or two and have it fly you to new locations. The Tower 2 basically boils down to an elaborate version of Time Crisis with lengthy sequences of QTE’s where your body movement replaces traditional button presses. The icing on the cake is a pretty awesome soundtrack, also inspired by the 80’s source material. 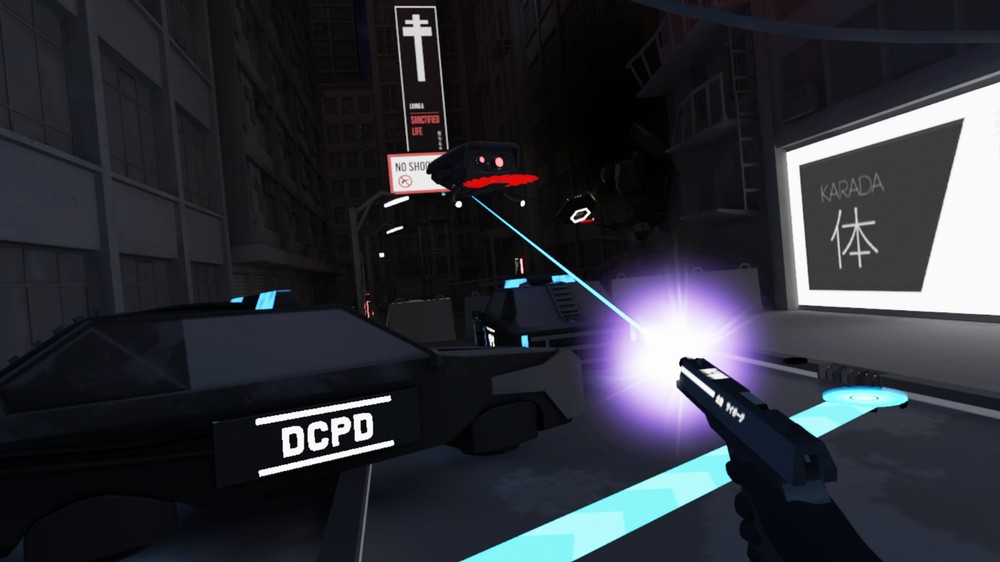 The other component to The Tower 2 is the VPL mode, which requires much more physical interaction and toned reflexes. Borrowing the pink and blue colors of Beat Saber, VPL has you riding around several cool worlds, much like the tutorial. The first level reminded me a bit of the original Mirror’s Edge game with its whitewashed, almost sterile art style, but you’ll move on to more exciting venues soon enough. You’ll find your gloved hands are colored pink and blue and there are numerous pink and blue glowing orbs that you need to touch/collect.

This starts off simple enough until they start throwing in crazy combinations that will have you crossing your arm to reach opposing colors or mixing in traversal elements like grabbing and riding an overhead rail with one hand and reaching out to grab an orb only to quickly switch hands so you can match the correct color. In addition to collecting the orbs you’ll also have to contort your body to avoid all the course obstacles along your path as well as shoot your way through walls and windows to complete all eight challenging courses spread across four unique environments. 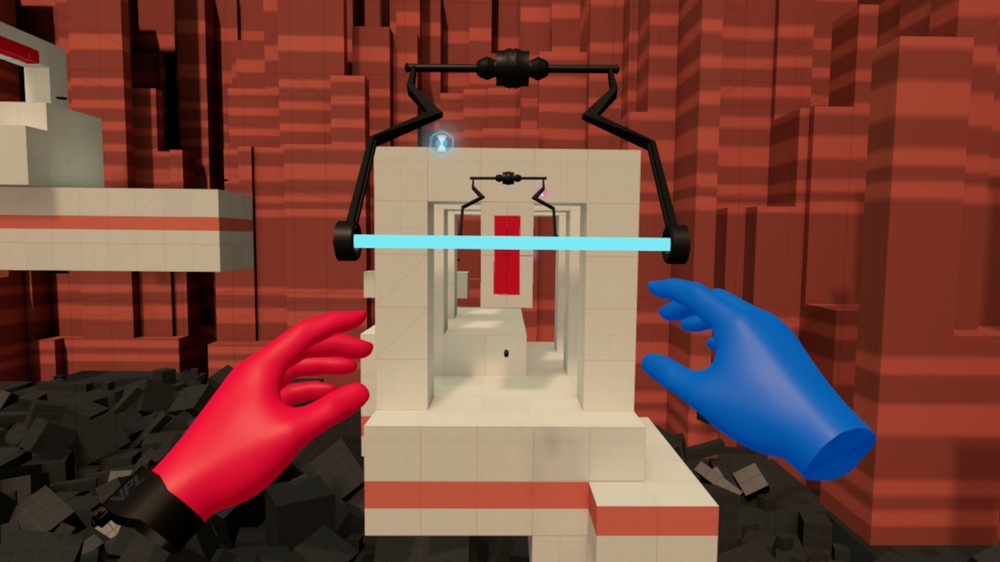 VPL turns out to be the core component that will keep you playing The Tower 2 for countless hours, or until your body aches from all the stretching. The leaderboards and various challenges for each course help to create a competitive atmosphere to what is otherwise a single-player game. Even the 80’s sci-fi mode offers a few hidden collectibles, VHS tapes that will unlock cool collectibles for your trophy case, so collectors have a reason to revisit the city once again.

The Tower 2 is available on Steam and the Oculus store, the version reviewed here, so I won’t be making any comments or comparison to the Vive version. I was playing on the Rift S which offered up some great visuals and precision interaction with the Touch controllers. I was stunned by the accuracy and feel of the pistols; even without reticles the aiming was intuitive and surprisingly realistic, firing that first shot for tracking then tightening your aim with each successive shot. The Rift S did a great job of tracking my body movement, but it did seem to frequently (6-8 times in 40 minutes) shift my lateral movement to the point where I would fall off the conveyor even though my feet were never moving. I was able to overcome by routinely looking down and sidestepping if my circle wasn’t centered on the blue belt. The game checkpoints, but not always often enough; sometimes forcing you to replay several minutes if you happen to die at the end of a traversal section or boss fight. 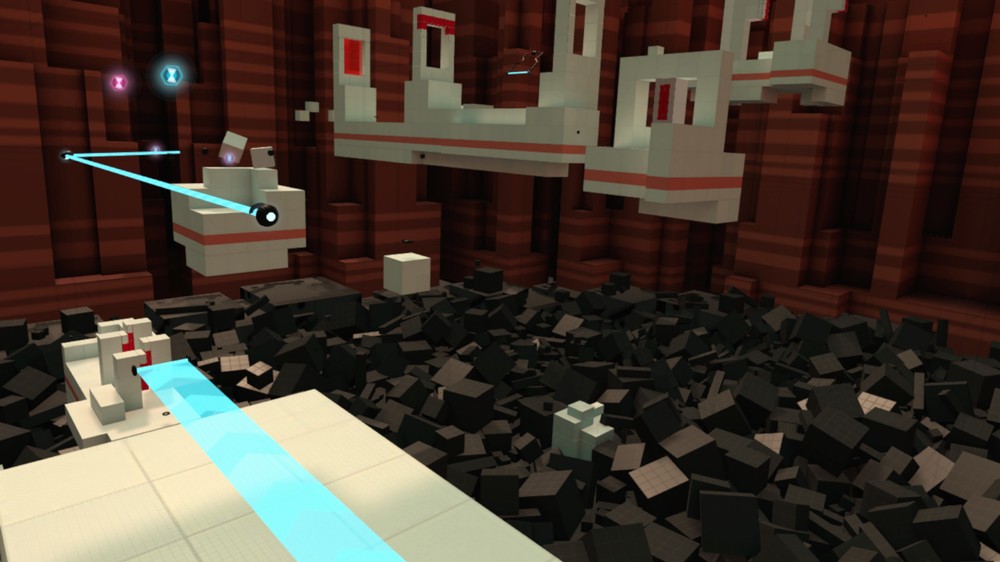 Between the two modes you are going to have plenty of fun and even some casual stretching exercises with The Tower 2, and for only $10 I can totally recommend this game. The creative use of automated movement along with several comfort settings practically guarantees no motion sickness. The cheesy 80’s sci-fi theme will certainly delight fans of The Terminator with some obvious themes and dialogue lifted right from the franchise, and VPL environments are fun and challenging additions that will prolong your enjoyment for as long as you want to play them.