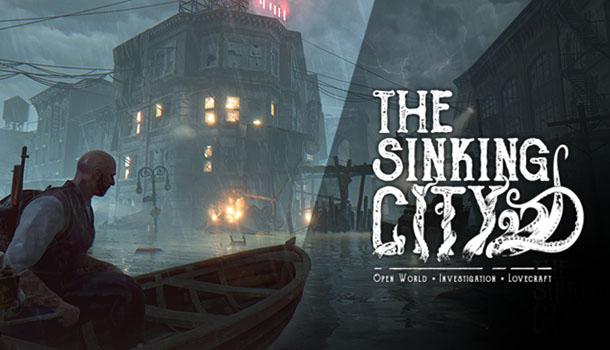 A haunting evolution of storytelling and crime solving.

The name Frogwares has become as much of a genre as it is a studio. The mere mention of the name sparks images of a certain visual style, a certain gameplay style, and an overall sense of what you are going to get when you play the game, no matter what it is.   The Sinking City fits into that category perfectly, blending imagery and gameplay mechanics from Indiana Jones, Sherlock Holmes, Batman, and a splash of Lovecraft’s Cthulhu. Fans of H.P. Lovecraft’s “Facts Concerning the Late Arthur Jermyn and His Family” will certainly recognize familiar storylines, but knowledge of the author or his works is not required.

Rather than skirt the obvious issues with the controversial author that inspired the game, the developers embrace them with an upfront warning about what you are about to experience, but then brilliantly disguises those same issues in a world of fantastic locations and mystical creatures. Immigration and racial issues are still obvious within the storytelling but don’t seem to resonate as much as they do in our current political and social climates when we are talking about fish and monkey people trying to survive in Oakmont, Massachusetts after The Flood has submerged much of their city and separated them from the mainland. 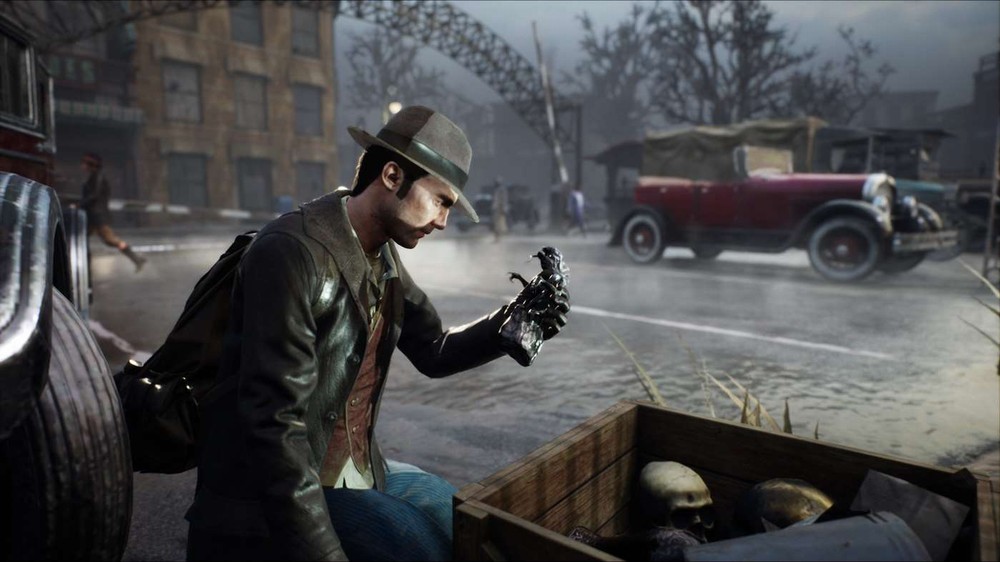 In addition to a great setup for the story The Flood offers plenty of inspiration for the artists who have created a haunting version of Venice where flooded roads are now canals and boats are a primary mode of transportation. Oakmont is quite massive and divided into multiple districts offering unique looks and gameplay opportunities as you travel across the city. Racial issues have led to segregation with various species confined to certain districts, but no matter what part of town you are exploring there is this overwhelming sense that something evil is lurking beyond the obvious.

You’ll be playing as Charles Reed, a WWI veteran who has been suffering from nightmarish visions just like the one that launches the game. He has come to Oakmont to seek out the source of these visions along with exploiting his private investigator skills in solving a few crimes along the way. The Sinking City is primarily an adventure game, but there are also heavy components for puzzles and even some RPG-lite integration with three skill trees covering Combat, Vigor, and Mind abilities.

Fans of any of the recent Sherlock Holmes games will find familiar material when you start analyzing crime scenes with a unique detective vision called Mind’s Eye that reveals visual clues that you must sort through to recreate a sequence of events. As clues are revealed they are placed in your Mind Palace where you must link that critical information into valid deductions to solve the crimes. It’s all quite intuitive, even during the initial investigation that serves as your in-game tutorial. 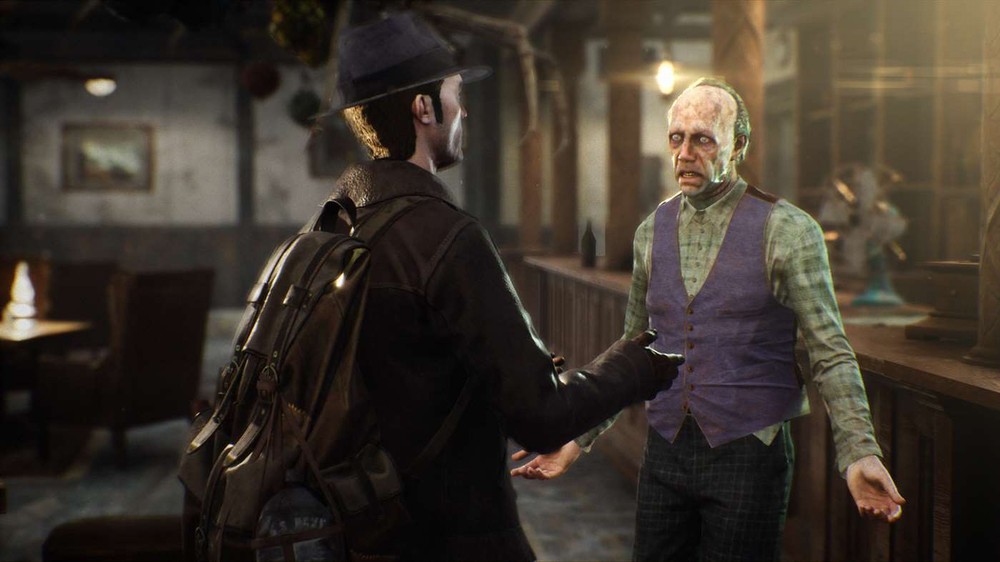 The Sinking City is heavy on conversation and dialogue trees, and the one thing I really appreciated was that any discoveries you had made prior to talking to someone appeared as dialogue options, and as such indirectly rewards your thorough investigation of the city, or at least the immediate area, prior to engaging with key people, otherwise you fall into that trap of backtracking between people and locations, and this is one game where you want to minimize travel…more on that in a moment.

Speaking of locations, I was also impressed that the game doesn’t hold your hand when prompting you to find a place in the city. Yes, there are a few key locations on the map from the beginning, but generally, when somebody tells you to go somewhere they might only give you a street name, or if lucky an intersection. Sometimes location clues are verbal while others are buried in the hundreds of documents you’ll want to carefully read while playing. Most games will lazily put a mark on the map, but The Sinking City turns something as simple as traveling into its own mini-game of discovery.

The Sinking City is loaded with crimes and mysteries, and once you solve that initial murder case prepare for many more investigations from simple robberies to crazy cults, horrible racial hate crimes, and even government corruption. There is a brilliant complexity and an ongoing progression of seriousness for each case and how it impacts the big picture of what is going on in Oakmont and even the world. The methods used to solve these crimes are presented in a much more realistic way than most any other detective game I’ve played before – even the Sherlock Holmes games. Despite the visual aid offered by the Mind’s Eye ability, Charles will need to use real-world detective tactics to discover complex sequences of clues and ultimately solve the crime. This means a lot of reading and research as well as numerous conversations with witnesses and other key characters. The entire process seems natural and realistic; an evolution of storytelling and crime solving rather than a simplified game mechanic where you are crossing things off a checklist. 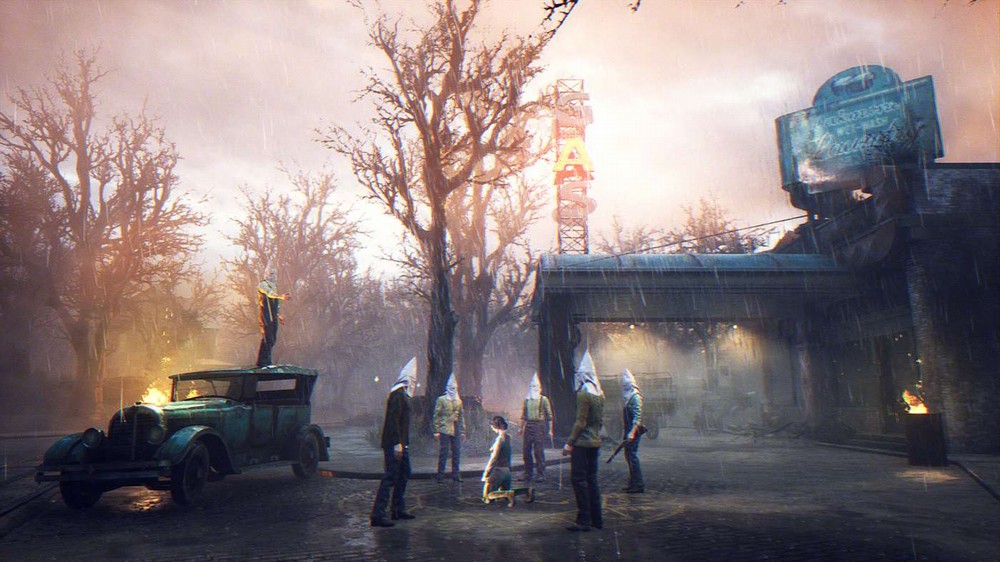 As you might have guessed, there is considerable traveling in this game and most of it is on foot, sometimes by boat, and sometimes both. Depending on where you are and where you need to go these trips can take several minutes and there is nothing built into the game like collectibles to make these commutes any more enjoyable. If anything, it just slows down the game and artificially pads out the completion time. There are a few fast-travel locations that will eventually help speed things up, but these only activate once you’ve unlocked them by visiting on foot first.

As previously mentioned you have three skill trees to build upon with each granting various passive and active abilities and character perks. Mind is important as to maintain your sanity during your investigation as using your Mind’s Eye will drain your mental health inciting all sorts of haunting delusions. Improving my combat skills seem diametrically opposed to the game’s continued insistence to avoid combat, partially because ammo is rare, to the point of being used as currency, and partially because combat isn’t that good with floppy aiming that will have you wasting most of your ammo against smaller and faster creatures. Death is of little consequence, as you merely respawn at a safe distance with no penalty to stats or inventory. You can think about what you did wrong as you walk back to try again. 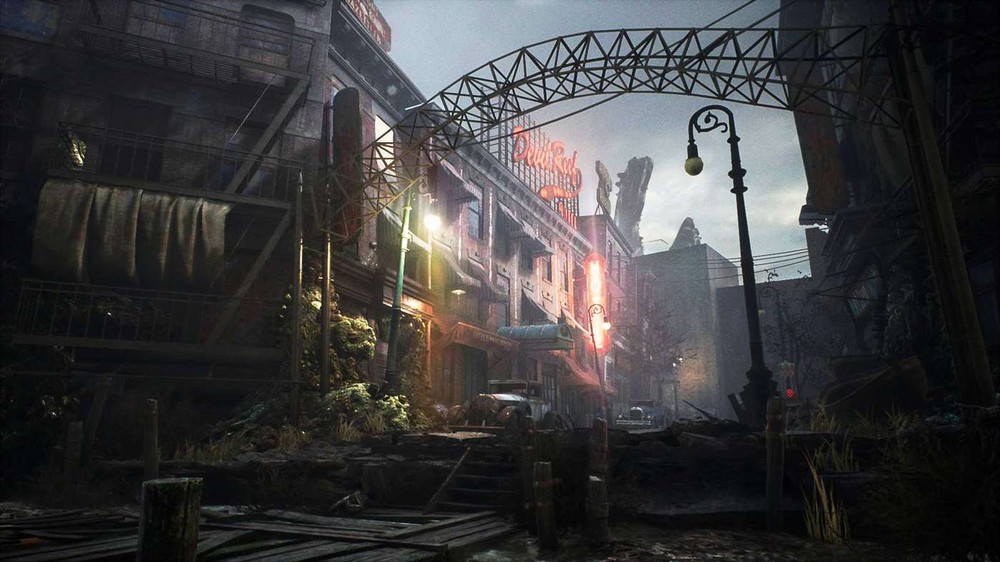 I loved the presentation for The Sinking City with some gorgeous 4K visuals with great lighting, detailed textures, and haunting atmospheric effects. Some of the environments were so realistic I could smell the salt water and rotting fish. Character models and facial details are also really good although Charles has a serious case of “dead eyes”, or maybe he is just a soulless husk. The Mind’s Eye filter effect is pretty cool and all the various tools are intuitive and laid out nicely within the menus. Music and sound effects are excellent and the voice acting is exceptional with only a few odd readings, but that’s to be expected with a game packed with so much dialogue.  Lip sync is hit and miss, as to be expected with a game that supports three spoken languages; English, French, and German.

If you are a fan of Lovecraft, Cthulhu flavored games, or just want to play a good adventure game, especially one heavily rooted in the crime-solving mechanics of the Sherlock Holmes franchise, then The Sinking City was made for you. There are a few minor issues, mostly in the plodding travel system, but overall I had a great time solving crimes in Oakmont as well as figuring out my own personal issues. You can find this game now on PS4, Xbox One, and PC on the Epic Game Store, and on Steam in 2020. 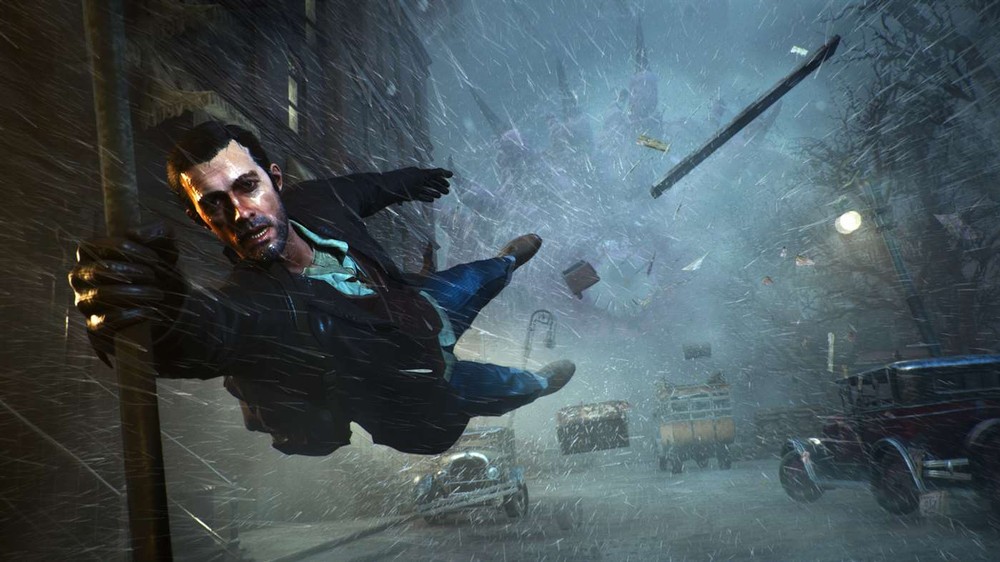 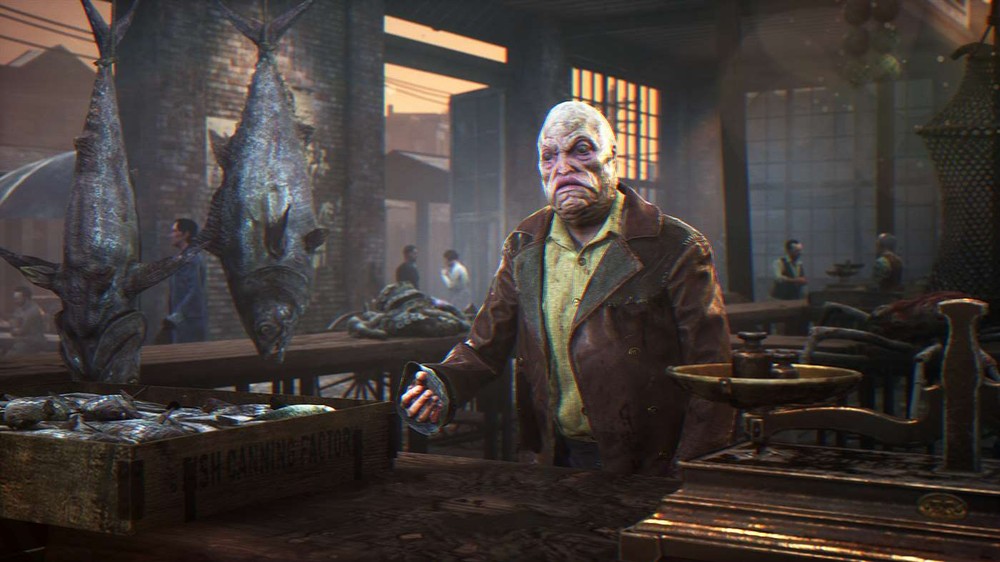 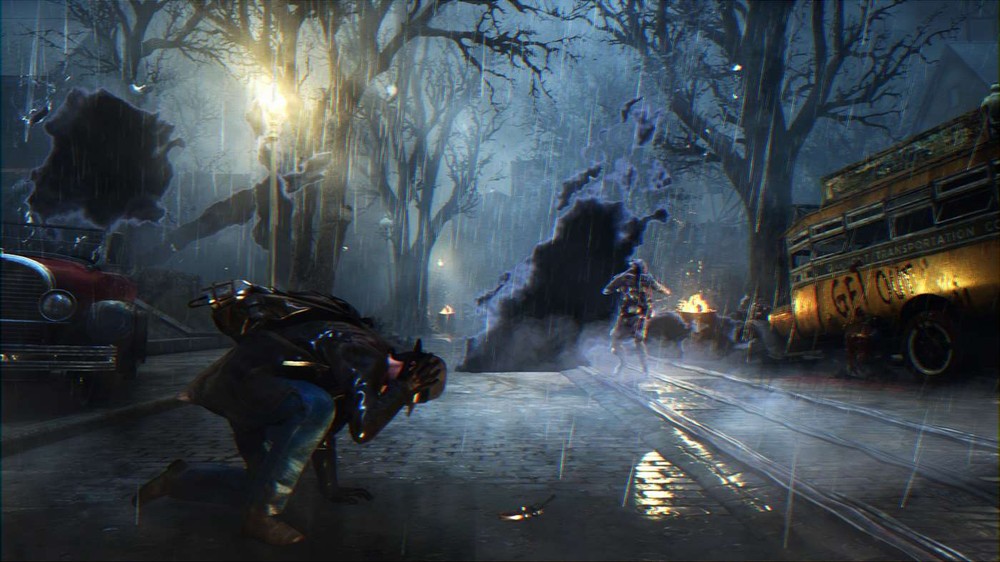 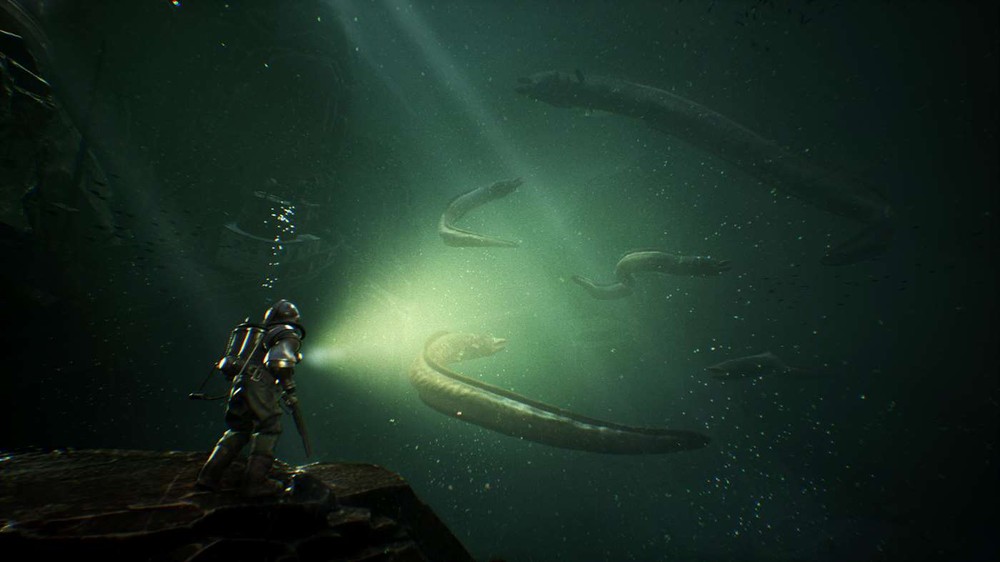 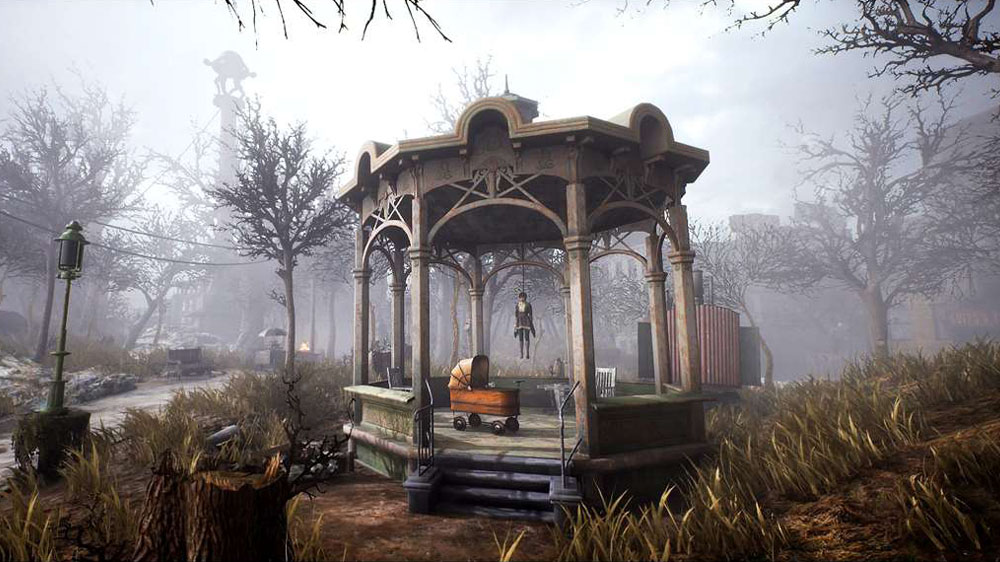