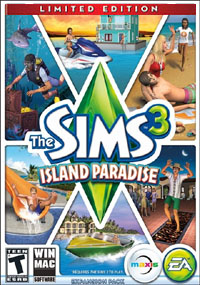 It’s almost difficult to believe that The Sims 3 was released over four years ago, a testament to the success of EA’s release of a seemingly endless stream of expansion packs that update the Sims 3 experience every few months. I’m a little amazed that Island Paradise is, in fact, the game’s tenth expansion. (The Sims 2 had eight expansions, and The Sims had seven.)

As suggested by its title, Island Paradise is a tropical and vacation-themed expansion, which includes the new town of Isla Paradiso. A beautifully designed island archipelago, Isla Paradiso offers Sims an abundance of new activities, such as sailing, building or living on a houseboat, playing on beaches, scuba diving, working as a lifeguard, and running a resort.

I was surprised by how much I enjoyed building and playing on a houseboat, though it’s not terribly intuitive to figure out how to go about doing so. Sims games usually err on the side of being almost too helpful in providing starting tips to help bridge any gaps, but not so in this case; I actually had to seek help on the Internet for the first time about an expansion feature as basic and major as this. 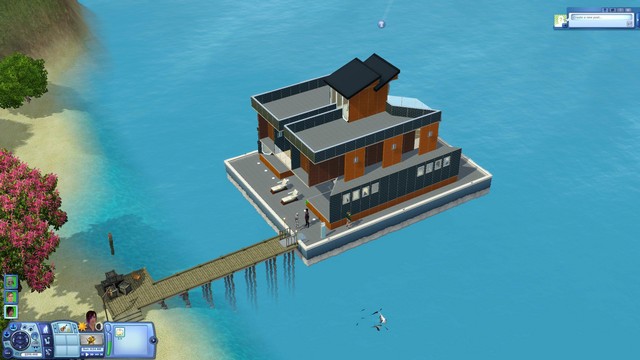 Unlike any other lot type we’d be familiar with from previous play, houseboats can’t just be plopped down on any old empty lot, not even if it has a beachfront. You need to find an empty dock lot, specifically enable that dock to accept houseboats, place down a specialized houseboat base, and, finally, after all of that, you can build a houseboat or place a premade lot on the base. Without in-game advice or an Internet search, I don’t know how players would naturally know to do this.

After I figured out how to build a houseboat, though, it was a lot of fun. They can’t be quite as large as some land lots and don’t have a yard for planting fruit trees, but houseboats are otherwise pretty similar to regular lots in that you can build a full five stories on the boat base, as well as one basement floor underneath. What makes them better than ordinary home lots is mobility: you can park your houseboat at any open dock, move it to a dive location, or even leave it out on the water wherever there’s space. Your Sims might get seasick, but not to worry—there’s a trait and a Lifetime Reward for that.

Houseboats can also be upgraded by handy Sims to move faster or run on autopilot, and some of the new boat-related space-saving objects, such as ladders and all-in-one bathrooms (which fulfill the bladder and hygiene needs simultaneously), are also convenient. You’ll also find speed boats, sailboats, beach towels, underwater cameras, water slides, and other themed objects that really add to beach and aquatic activities. 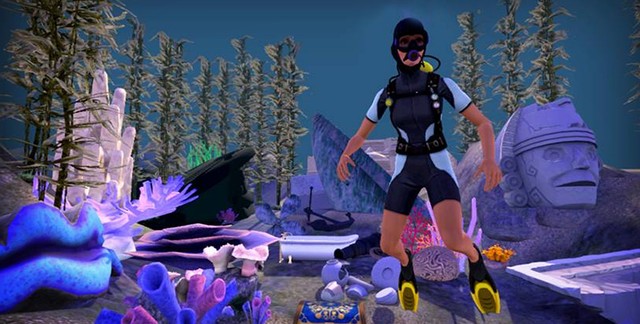 Island Paradise also offers an element of exploration and discovery, similar to World Adventures. With the addition of the snorkeling and scuba diving skill, Sims are able to explore underwater locations and find sunken treasure, which may reveal the locations of several hidden islands scattered around Isla Paradiso. When found, these islands become lots owned by your Sims, who can then develop them, if desired.

Speaking of development, building and running resorts is another highlight of this expansion. It’s not quite a full-on hotel management sim, but it’s one of new features that I enjoyed the most. Your Sims can buy an existing resort lot or build one from the ground up, say, from an uninhabited island you discovered. You can add housing towers and amenities, hire employees, and, based on customer comments, adjust and decorate your resort to increase revenue. The business simulation gameplay isn’t deep enough to be challenging, but it’s fun as an appropriately simplified add-on for The Sims 3 and does offer another outlet for building and decorating. It also provides yet another possible source of passive income so your Sims can spend more time scuba diving and engaging in island life.

Your Sims may also meet mermaids, this expansion’s new Sim type. They’re fairly similar to normal Sims except that they mainly eat fish and kelp, need contact with salt water now and again, and have a hydration need rather than hygiene, similar to that of PlantSims from the University expansion. Like PlantSims, mermaids can’t be made in Create-A-Sim, but normal Sims can become mermaids through certain interactions in the game. 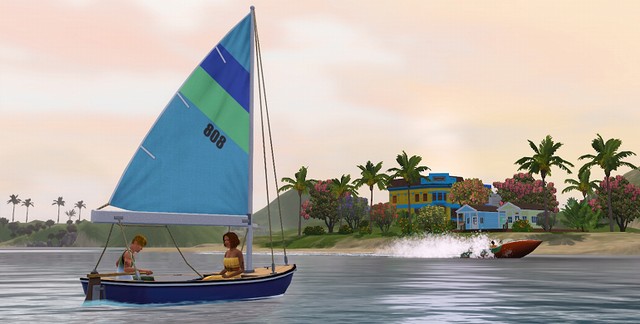 The main catch is that, to experience most of these new activities, barring using cheats to add new features to previous towns, you’ll have to uproot your Sims and move them to Isla Paradiso. It’s the same problem that’s plagued many of the previous expansions for The Sims 3, such as Late Night, whose experience largely depends on the lot types available in the active world. Thankfully, moving is at least easily done; you can now use the phone to not just move between lots in town but move to a new town entirely. It’s just that experiencing the new content seems more inflexible and inconvenient than it needs to be, especially for a life simulator.

For instance, I was surprised that Isla Paradiso didn’t become a possible vacation destination, like Egypt, China, and France from World Adventures. What if your Sim wanted to experience the tropical climate without relocating there? I would have also expected dive lots and docks to be easily added to existing towns, like new lot types in previous expansions, but this isn’t the case.

In fact, as I mentioned, players cannot even add dock ports or dive locations to existing towns without using cheat codes—and, from a quick look at online tutorials, it looks like a fairly involved process. While using cheat codes to build or bypass glitches is more or less routine for many Sims players, Island Paradise could have definitely benefited from including tools to easily add and build dive lots or ports without resorting to cheats. 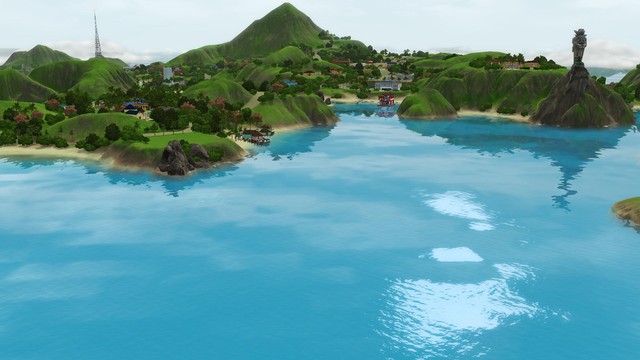 Other than that, I’d be an irresponsible reviewer if I didn’t mention that Island Paradise, unfortunately, also has a lot of bugs and performance problems—even fairly serious problems, in the case of my own experience—as of the time of this writing. My computer may not be top-of-the-line today, but it’s no slouch, especially for a game released in 2009, yet it takes several minutes for my game to load. That’s not to mention all the pathing and lag problems, moments my game just froze for a minute or longer, and bugged boats that ended up stalling in front of the houseboat and unable to take passengers anywhere, even though I manually clear the game’s cache regularly. This could be because, pretty as it is, Isla Paradiso is a big town, and there’s a lot going on with all the boats zipping around. Worse yet, though, something happened to my game many hours into the expansion material, and I can no longer save; it now sticks at the “Saving” screen indefinitely when I try, and I can’t quit without externally ending the program. It’s extremely frustrating.

EA is usually good about releasing patches to repair at least major bugs, so my review score reflects what I would have given the game if it didn’t refuse to save. After all, Island Paradise does offer up a balanced mixture of new objects and activities, resort-sim gameplay, a new type of Sim, and new hidden locations to explore and find. The Limited Edition version of the game additionally includes a set of island survival-themed objects, like driftwood furniture and a fire pit, to round out your island experience. There should be something in the expansion that will please most types of Sims players, and my misfortune probably won’t happen to everyone, else I’m sure I would have had an easier time finding a solution.

Overall, The Sims 3 Island Paradise is a substantial, entertaining, and well balanced enough expansion to warrant the price; however, as much as I hate to say it, given the glitches and performance issues, I would probably caution against diving in head-first until EA releases some bug fixes. I’d recommend that you back up your game as the expansion suggests and be prepared, at least. I’m glad I did. 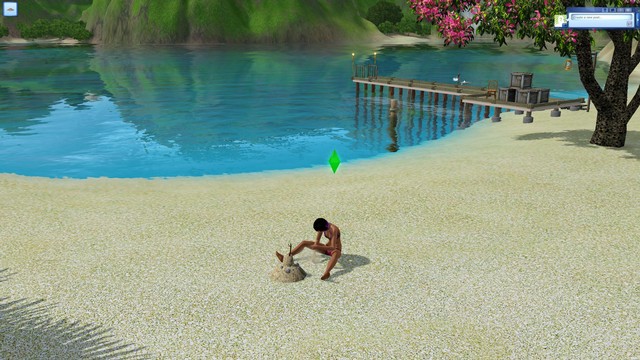 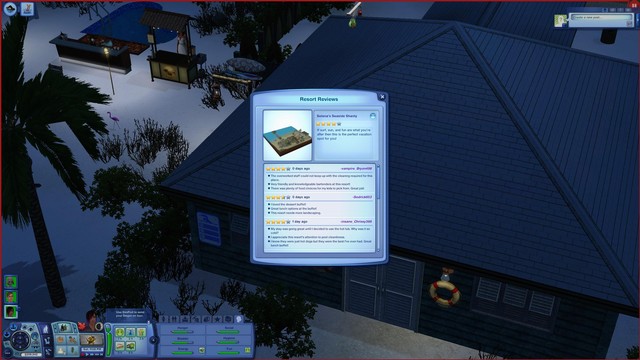 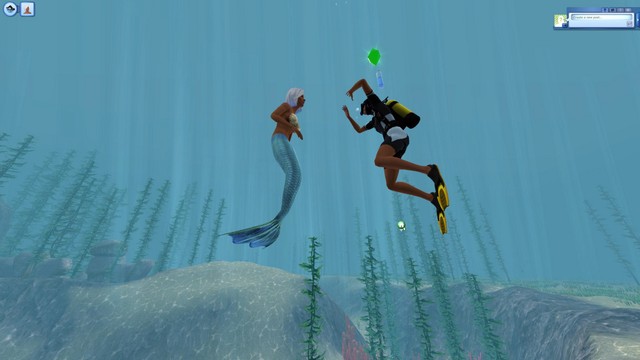 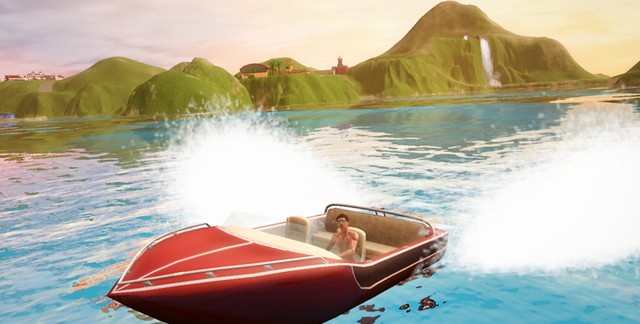 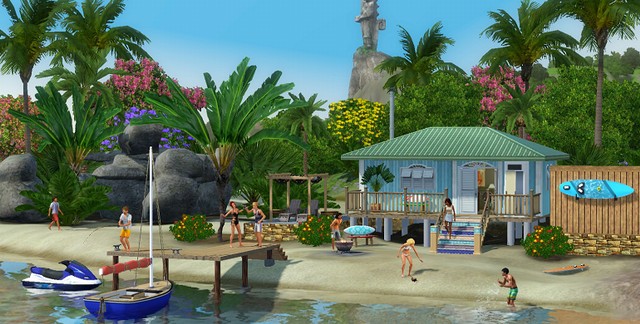 1
765
The Walking Dead: Saints & Sinners Review – Oculus Quest
2
706
Synth Riders Celebrates Anniversary with a Month Full of Treats and an Oculus Ques...
3
704
Take to the Skies and Choose a Side in the New Trailer for Next Generation Air Com...
4
704
CRASH BANDICOOT 4: IT’S ABOUT TIME IS AVAILABLE NOW
5
704
Join the Galaxy’s Finest as Star Wars™: Squadrons Soars Into Homes Today
6
704
The Falconeer First-Look Preview – PC
7
704
Metamorphosis is 33% Off on Steam!
8
704
Werewolf: The Apocalypse – Heart of the Forest launches on October the 13th
9
704
Worm Jazz Review – PC
10
703
Frictional Games Shows Off First Gameplay Footage of Amnesia: Rebirth
All Original Content on Game Chronicles is Copyright (c) 2002-2020
Sinjin Solves Walkthroughs Copyright (c) 1996-2020 by Mark Smith