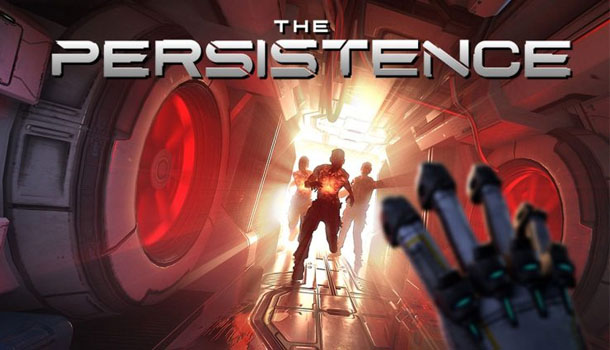 The Persistence is yet another sci-fi VR experience that finds you on yet another abandoned space station trying to escape, but before you stop reading let me tell you that this game finally nails this niche genre perfectly, rising above the countless others that have tried and not come close to this level of originality and polish. There are several ideas and gameplay concepts that put this roguelike, sci-fi, survival game in a league of its own; the first being the overall setting, which not only sets a grisly mood but also explains why things work the way they do.

When the game opens you’ll find yourself in the first of many cloned bodies of security officer, Zimri Eder, and with the aid of the onboard computer must try to repair your ship, free it from the gravitational clutches of a nearby black hole and make the jump back to earth. There are two elements in that previous sentence that justify the entirety of what you are about to play. The fact that you are a clone gives this roguelike the perfect explanation for how you can keep coming back and trying again when you die, minus weapons but with all your upgraded abilities. The fact that you are trapped in a black hole with all sorts of dimensional weirdness going on explains why your crew has been turned into murderous aberrations and why the ship’s procedurally generated layout changes each time you die and restart. 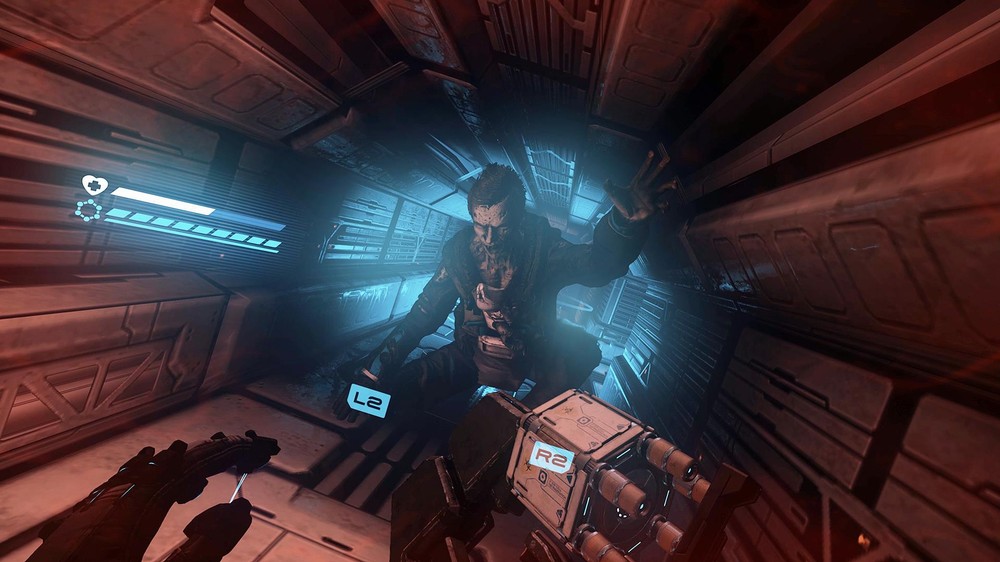 At its core, The Persistence is fairly simple and straightforward in what to do and how to do it. You explore the many passages, rooms, and mazes of ductwork in search of collectibles, trying to either avoid or kill the zombie-like remains of your crew, all the while trying to reach the designated waypoint and restore the many broken parts of the ship so you can escape back to earth. Frankly, I was amazed at just how smooth and polished the visuals were in the game; so smooth I was able to turn off all the comfort assists and still play the game on my PS4 Pro for hours at a time. The DualShock 4 is perfectly implemented, so there is no issue with crazy Move motion controls, and most interactions within the game merely require you to look at a green spot for two seconds to activate or collect.

As you explore the ship loading up on med packs, stem cells, and fabrication parts you will encounter numerous ex-shipmates who will try to kill you in a mutant rage. Stealth works best in many situations and allows you to harvest additional stem cells with your extractor device. All over the ship are fabricators; something like a 3D printer that can create weapons, armor, and even passive abilities like an emergency teleport if you are about to die. These items all cost various amounts of the collectible “currency” you gather while playing. Most items must first be unlocked; then they can be freely purchased on the current and subsequent playthroughs along with their respective ammo clips for reloading. While some weapons are lying about the ship you’ll still need to rely on manufacturing your own arsenal to survive. Weapons range from simple space handguns to swarm droid bots and my favorite, a gravity grenade that creates a mini-black hole and sucks in all nearby mutants. Make sure you aren’t in the gravity field when it goes off. 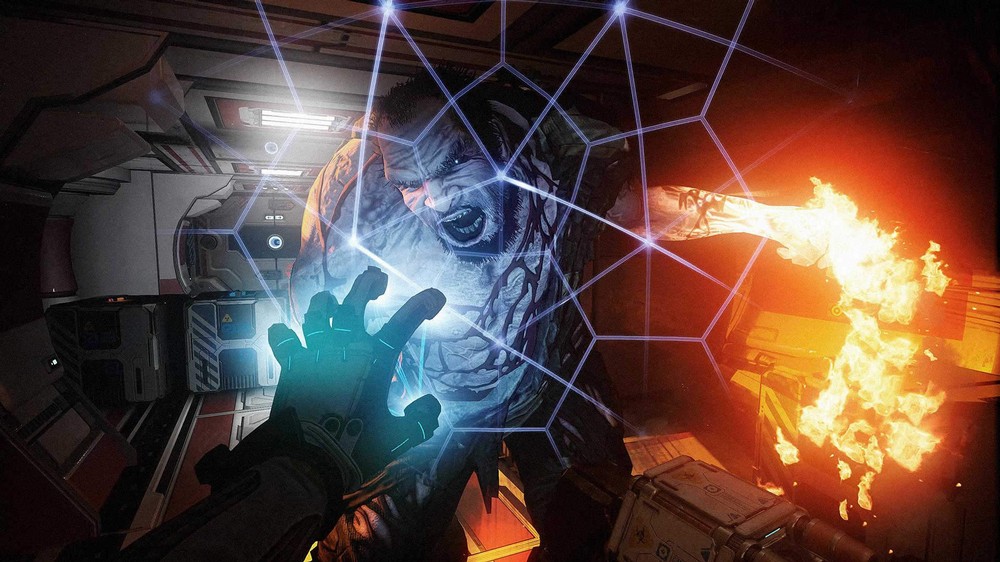 Playing The Persistence alone can be a stressful and very often a frustrating experience. The mutants are very powerful and your clones are weak in the first several passes through the game. Weapons are hard to come by and they run out of ammo quickly, plus the ship is very dark making it hard to spot the enemy without the use of your flashlight, which also seems to attract the mutants. The mutants are also very alert to sounds, especially the hissing of a door when you enter a new room. With no saves or checkpoints the level of tension and fear is off the charts the longer you play.

The Persistence, which is actually the name of the ship as well as the title of the game, is a literal maze of passages and interconnected rooms that you must navigate to reach the target waypoint as given by the computer. As mentioned, the layout changes each time you die and restart but nearly every room has a map terminal where you can pull up a 3D map of the ship, plan your route, and even place your own waypoint marker. You’ll quickly get into the routine of entering a room, killing the one or two wandering mutants inside then looting everything you can pick-up before repeating in the next room.

Where The Persistence really shines is in the two-player co-op experience, which is so good it actually boosted this review score by a full point. If you are fortunate enough to have someone else in the room to assist you this game gets infinitely better and even takes on a new and unexpected gameplay dynamic. You’ll need a mobile device like a phone or tablet (tablet is highly recommended for screen size) and you’ll need to download The Persistence app on iTunes or Google. Once the VR player starts the game the other person can sync with that game via Wi-Fi and that’s where the fun begins. 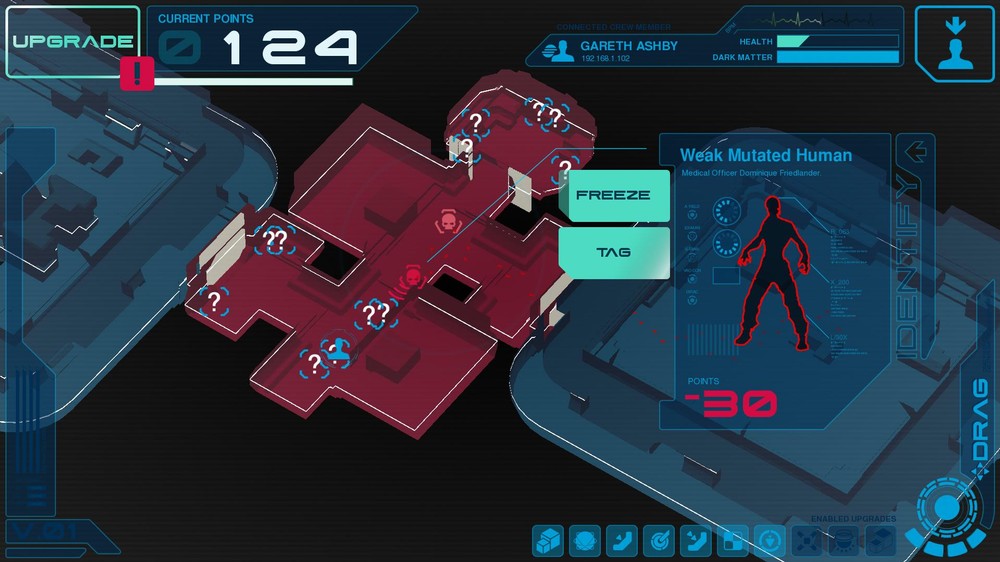 As the VR player explores the game as normal, the second player sees a real-time 3D map of the ship along with the player location and all points of interest depicted as (?) until you tap on the icon to reveal its true identity; either a collectible or enemy. It’s up to the person reading the map to call out all the locations of these items and help the player navigate to the desired waypoint, especially since moving the map to your mobile device disables all of the wall maps for the VR player. They are totally at the mercy of the second player.

But rather than simply calling out directions and targets the mobile player has a progression system of their own whereby you earn points for assisting the VR player that slowly unlock a list of assists that allow you to interact with the environment and its inhabitants. Soon, you can turn off lights in room, place your own waypoint markers for the VR player or even distract mutants by dragging a sound icon onto the map to lead the mutants away from the player. Further into the list of assists you will be able to click on individual mutants and temporarily freeze them or incite them, but as these unlocked abilities grow in strength the skill points to unlock them increase exponentially. 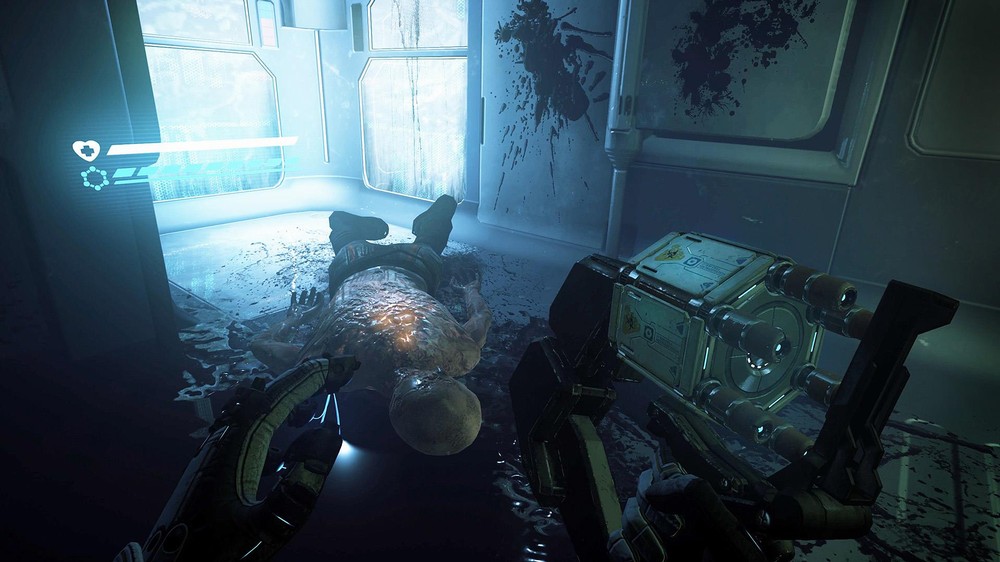 What impressed me the most was just how well this entire co-op dynamic worked. The player tracking was spot on, allowing the mobile map assistant to accurately call out distance and direction to the point where the VR player could find collectibles in pitch darkness without having to turn on their flashlight. You also get to see the player’s facing direction as well as enemy direction and movement patterns, and you even get sound ripples that show how much noise the VR player or the environment is making and its effect on the mutants.

Playing alone, The Persistence is still a fun and thrilling experience, but when you add in that second player it becomes something entirely new and significantly better, so much in fact that it is hard to go back and play alone after experiencing it with a friend. As with most roguelikes, the game gets progressively easier the more you play-die-repeat. The procedurally generated levels always keep the experience fresh, while the unlocked weapons and personal upgrades give you a sense of progression that hopefully counters any sense of frustration you have after dying at the final objective on three consecutive attempts. This is easily one of the best PSVR games I’ve played since REVII or Farpoint, and I totally recommend it for anyone with a PSVR and a friend who is good at reading maps. 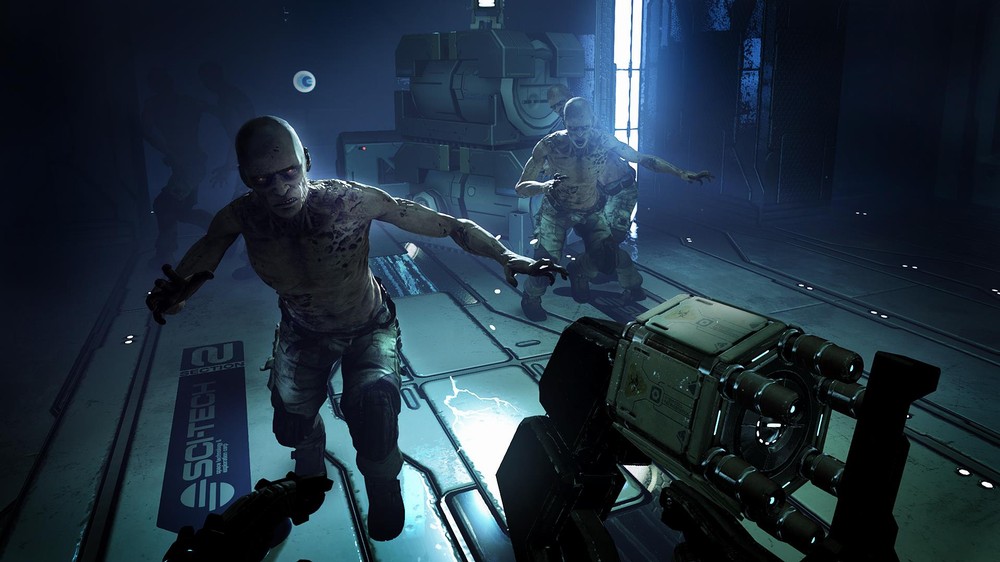 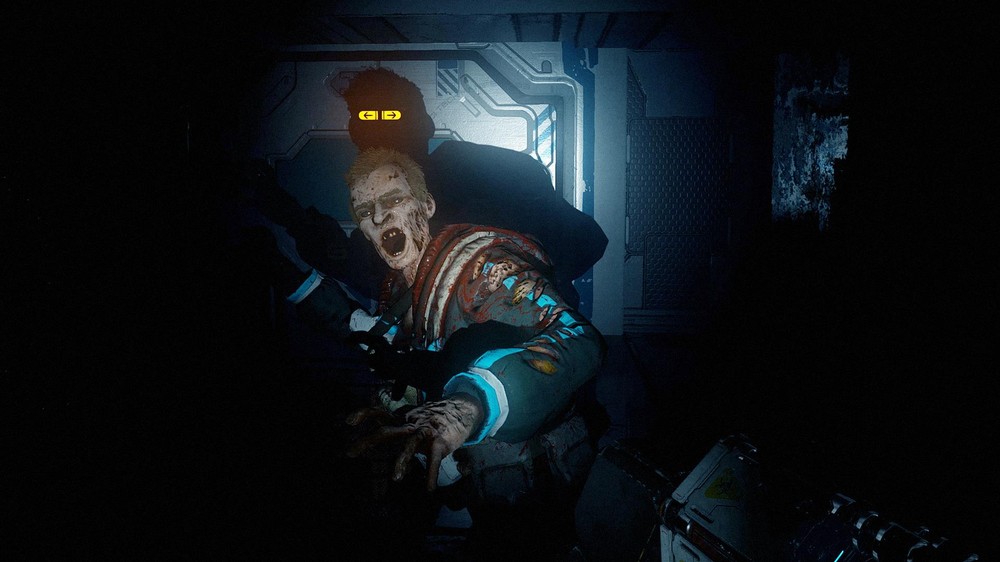 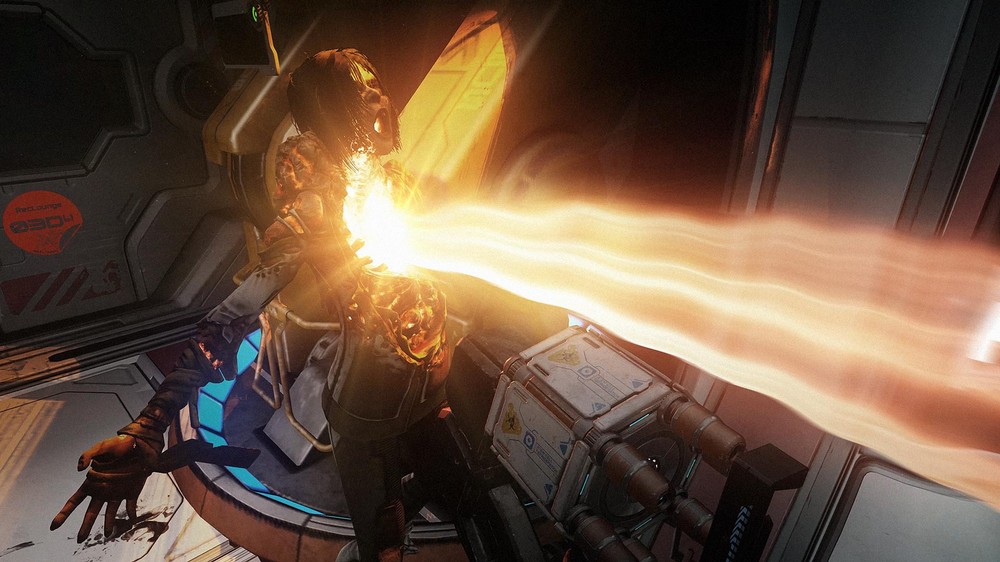 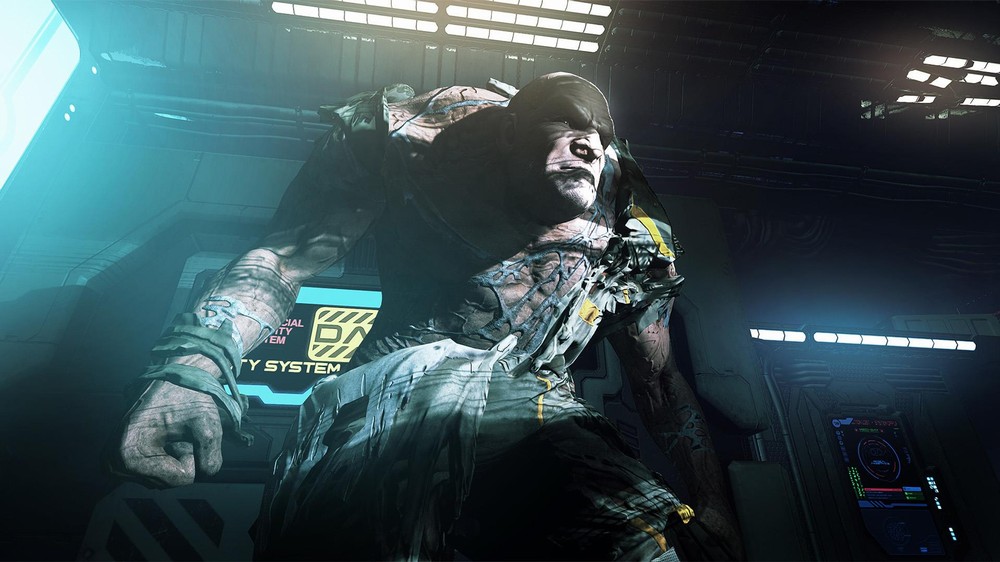