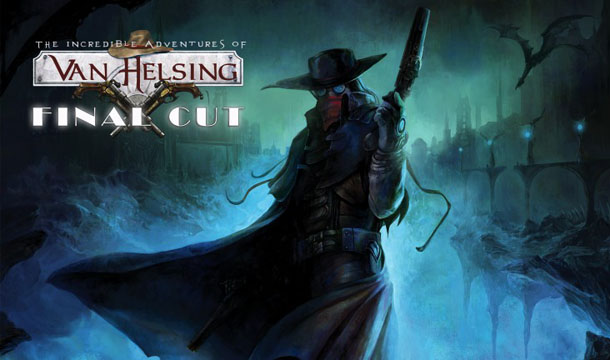 A sinister but awesome experience that I enjoyed well into the final moments of the 50+ hour story.

Ah Borgovia, how I have missed your creepily lit streets and all the monster slaying a legendary monster hunter can possibly want. What I didn’t really miss when I first reviewed The Incredible Adventures of Van Helsing a few years ago was the largely abrupt ending which left me with questions about the fate of one of my favorite monster hunting duos. Well its two years later and the charming Lady Katarina and the all too serious Van Helsing have been quite busy with the release of two more additions continuing after the original’s explosive end.

While I missed out on the second and third acts as they released, NeocoreGames has things covered with the release of The Incredible Adventures of Van Helsing: Final Cut for PC. This definitive version brings all three standalone adventures of our favorite monster hunter under one roof in a single coherent adventure. Players are now able to play as one of the six playable classes across the expansive 50+ hours combined single player campaign right from the start including the Umbralist class, from Van Helsing III, which I choose for my review run this time. 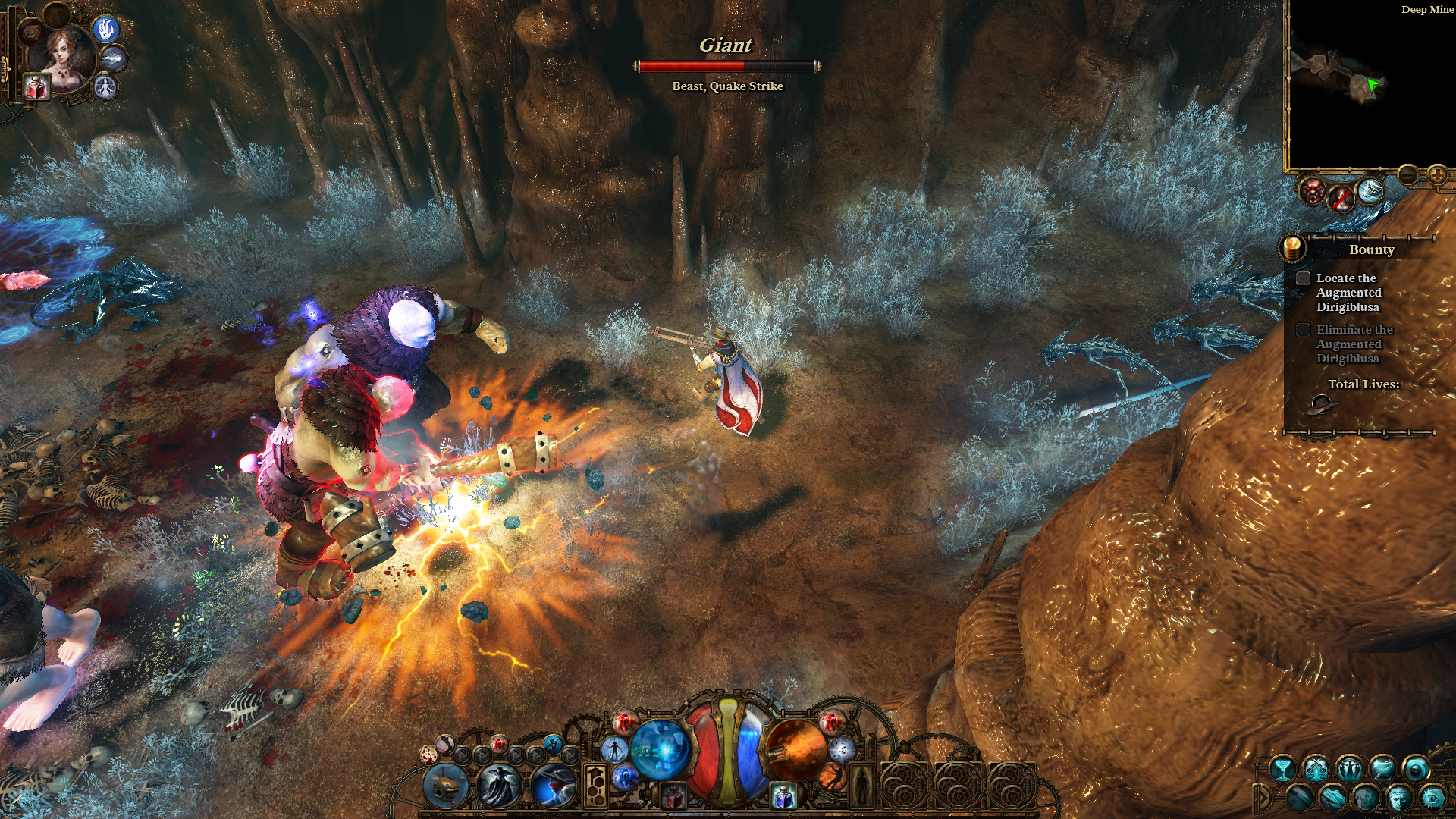 I dabbled with the other new classes: Protector, Phlogistoneer, Elementalist, and Constructor before really diving into my serious story run and found the Umbralist’s blade and shadow roguish play style more up my alley. Compared to my original ranged Bounty Hunter run with the first game, Umbralist’s melee combat presents challenges especially when getting swarmed upon by 15-20 plus enemy mobs; though as I leveled up and unlocked new abilities and raised my Umbra focus I was capable of negating a lot of potential enemy damage. There is also one rather very useful element of Van Helsing: Final Cut that makes combat a lot more enjoyable and balanced, Lady Katarina.

Lady Katarina is your constant companion through all three campaigns and did I mention she’s a Borgovia nobility ghost. That’s right your main source of witty banter is a ghost and also your perfect counterpart in combat. Katarina has three modes: melee, ranged and ghost that you can use and tailor to your chosen play styles. The first two modes are exactly what you would expect and often balance out things as she was often ranged to my Umbralist melee class so I didn’t get overwhelmed by enemies often. The Ghost option however is purely defensive mode as it raises your character’s defense while making Katarina completely untouchable by enemy forces but it also makes her unable to attack while in this mode. 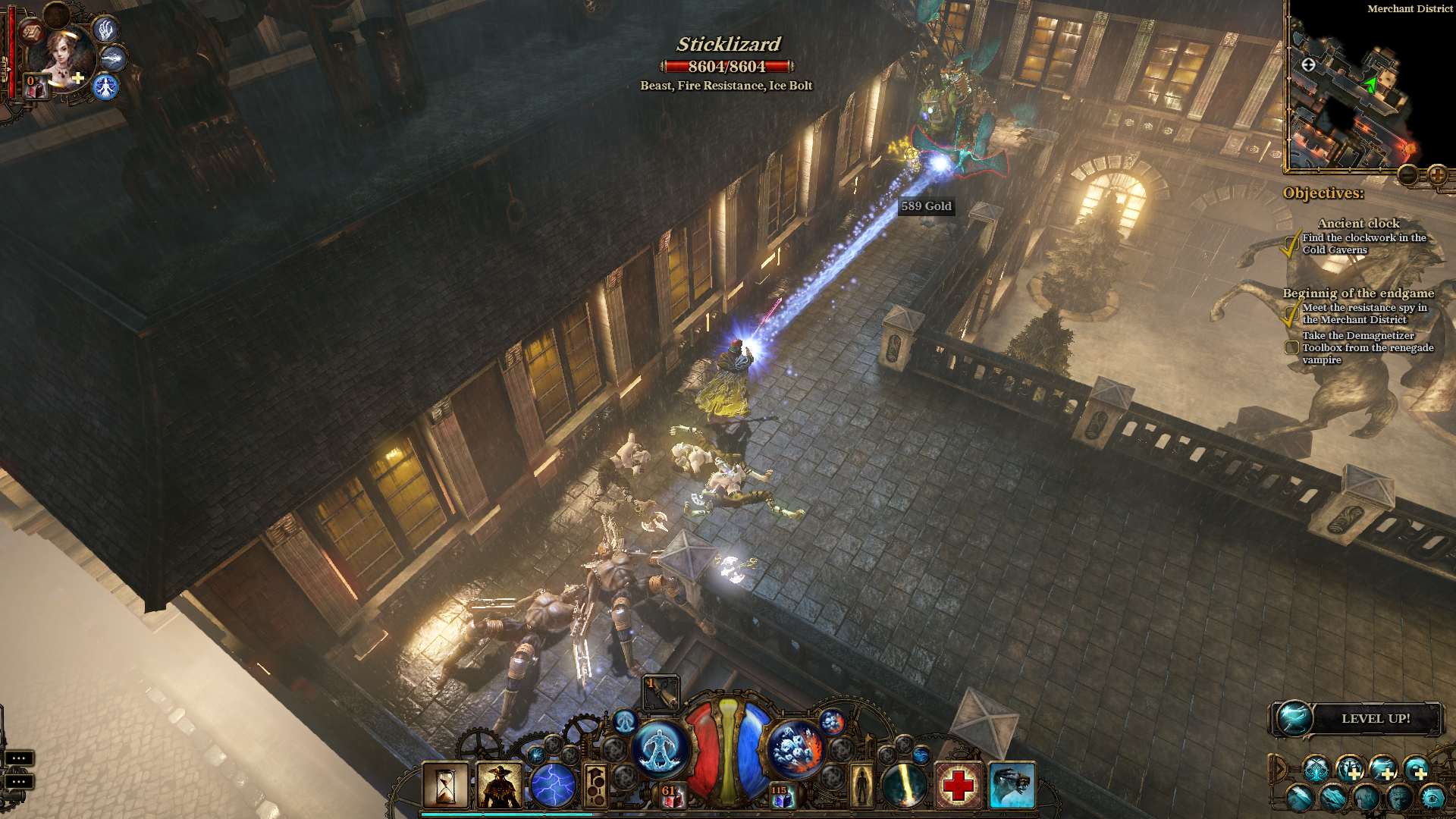 One of the coolest thing about Katarina though is that her abilities and skill tree is almost as complex as Van Helsing’s himself. She slowly levels up independently with the same basic categories as her partner Van Helsing which aid her attack speed, defense and other things. The best part though is that she has other skills that act as passives to aid Van Helsing even when she gets temporarily taken out of the fight. So you can have added defense, resistances to elemental attack like poison, increased critical damage and other benefits regardless if she’s attacking or taking a rest from the action.

Even though Katarina is like one of the best companions to a game’s main character EVER, it’s not her name in the title so it’s time for some more of the monster hunter himself. Specifically in the area of controlling our famed monster hunter’s…son. The original game was your traditional mouse point and click controlled adventure but later gained controller support. So you have two ways to play Van Helsing: Final Cut and with it, two different interfaces. My advice is try them both and stick with one that you like as the interfaces are wildly different but still manage to be easy to maneuver. My run this time was with a controller and fans of the console version of Diablo III will be right at home with this option. 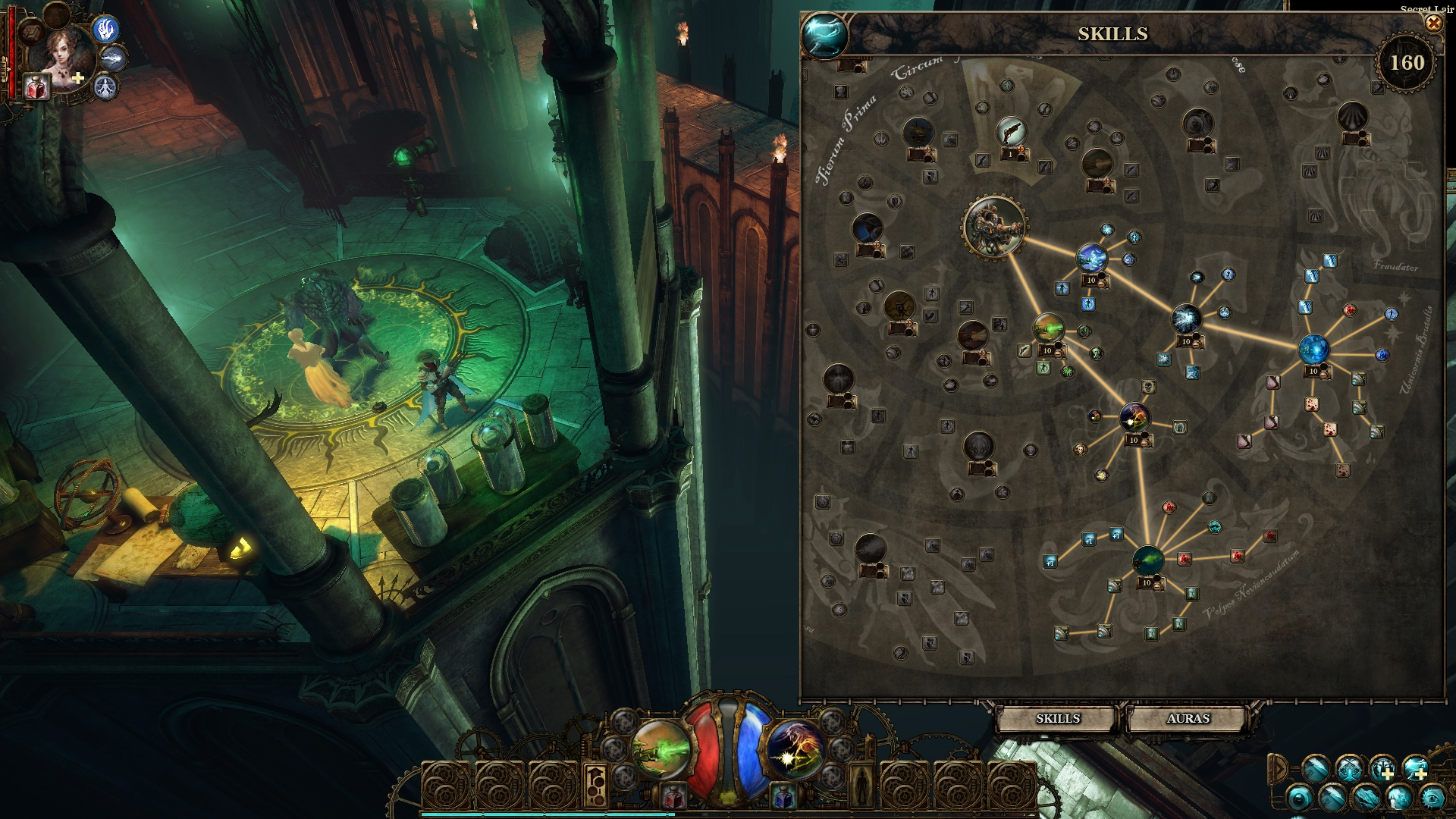 Speaking of Diablo, there is plenty of loot to be found in The Incredible Adventures of Van Helsing: Final Cut and not just for our monster hunter. While most of the loot you find from enemy drops is for Van Helsing there is some gear for Katarina that will show up. There is often so much loot, thanks to my penchant for searching every last inch of a map that I often made trips back to town or secret lair to unload. This can be delayed a bit because you can customize Katarina with a slew of options to pick up items and gold for you based on your selected criteria, as she has her own inventory storage. Is there anything this Lady can’t do beside you know… eat?

You’ll need every bit of that storage as The Incredible Adventures of Van Helsing: Final Cut doesn’t just end as the credits roll at the end of the third adventure. This final version has been tweaked, trimmed, and expanded to offer new endgame content like the Scenarios mode, challenges, daily quests and the Glory System. Scenarios test your skills with a wide variety of randomly selected monsters, locations, special conditions and objectives. Glory Mode is your way to progress your character beyond the max level of 80 in the campaign mode. Similar to Paragon in Diablo, Glory allows you to gain another 20 levels with the other game modes like Scenarios and the Arena. Van Helsing: Final Cut also features some Multiplayer and 4-player Co-Operative play across the entire campaign. 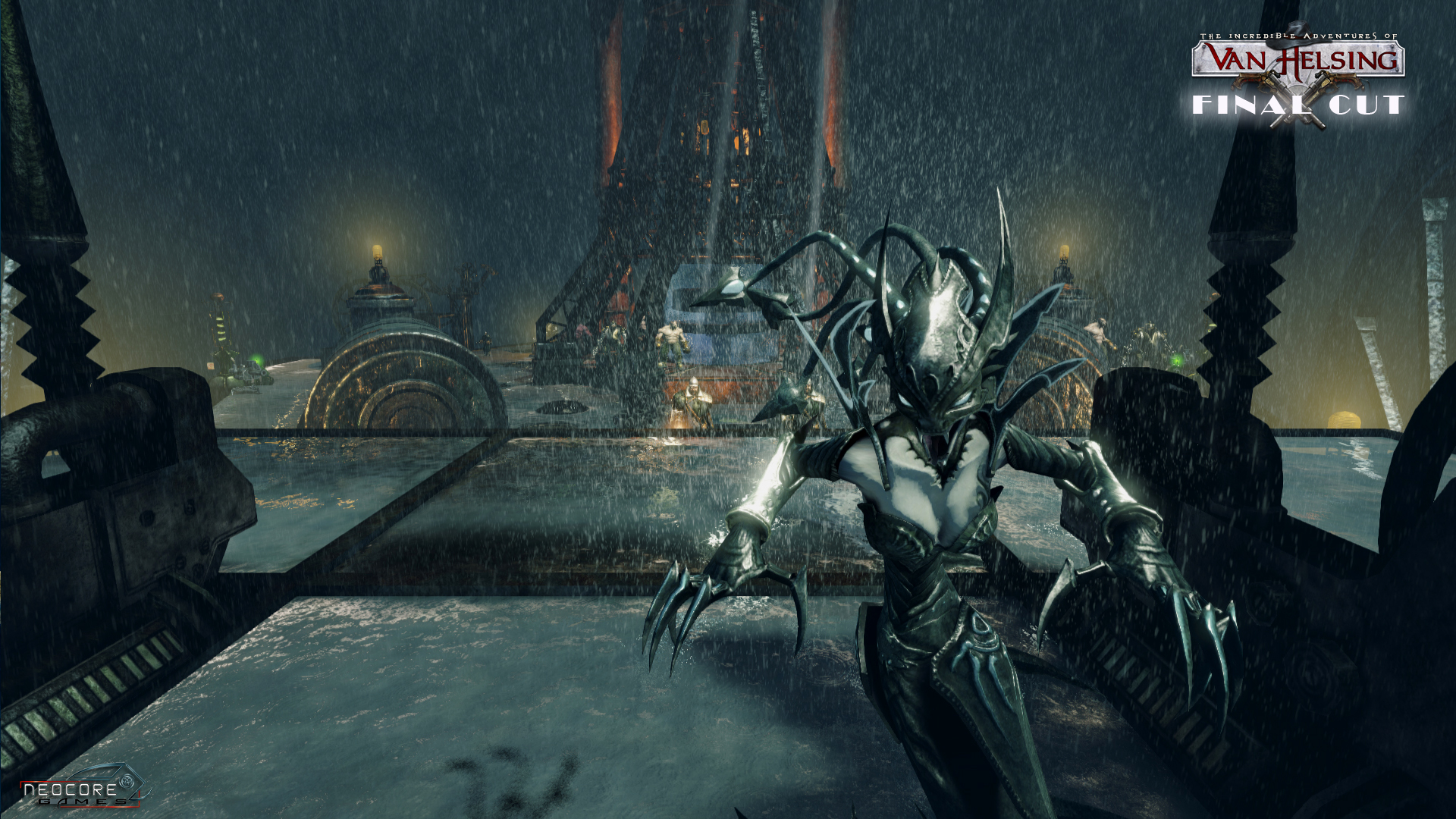 The Incredible Adventures of Van Helsing: Final Cut is a pretty solid game though there are a few things to take note of. First is that while it does support a controller very nicely you need to make sure it’s active before loading the game, as you have to restart the game if you do it afterwards, which a bit of annoyance. The second and probably most important thing is that The Incredible Adventures of Van Helsing: Final Cut uses an account-based system for your save files, aka your characters, via internet. So no internet no continuing your progression of your higher characters. That said you can create and play characters offline, but it disables all online interactions with other real players if you do so.

What ties all the different aspects of The Incredible Adventures of Van Helsing: Final Cut together in one complete package is NeocoreGames’ wonderfully created universe that you explore and fight through. This gothic-noir presentation takes you through dark woods and an old world town filled with magic that you would expect in a traditional Van Helsing story before gravitating to the steampunk European style city of Borgovia where most of the adventure revolves around. The monsters, some that you will recognize despite their old world names, the atmosphere, music and locations all lend to creating a sinister but awesome experience that I enjoyed well into the final moments of the story. If you’re already a fan of the series or a newcomer looking for a fun yet challenging action role-playing game then you should check out The Incredible Adventures of Van Helsing: Final Cut for PC today.