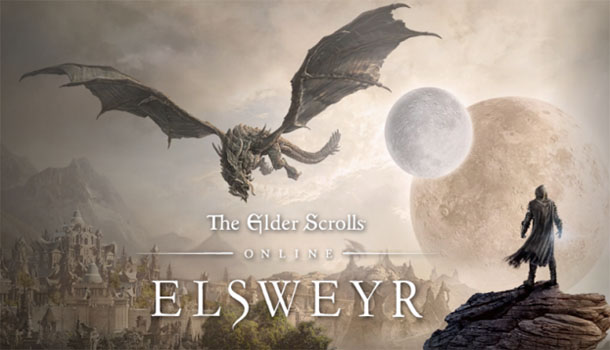 - Treacherous to navigate at times
- Dragons can turn you into BBQ!

The perfect bundle for newcomers to the ESO franchise, and the perfect upgrade for existing players.

Ah yes, this one relished at the chance to seek out one’s fortune and adventure across this one’s homelands in Bethesda’s latest chapter The Elder Scrolls Online: Elsweyr Collector’s Edition for PC. Things however got a little hotter than Khajiit expected as this one narrowly escaped being a foul dragon’s meal. Once this one found their feet again it was time to set off in search of peril and wonder.

If one has not figured out by now, I am a big fan of the misunderstood Khajiit race. Almost always the downtrodden or unjustly treated, the Khajiit is easily my favorite go to race in the Elder Scrolls franchise. As I prefer the rogue life in whatever flavor of Bethesda’s beloved franchise, the Khajiit has always been my stealthy avatar. This time however, my Khajiit profession has taken a turn to a side as dark as this one’s fur with the newly added and highly anticipated Necromancer class. One must remember not to summon the undead in towns though, yes. Very bad this. 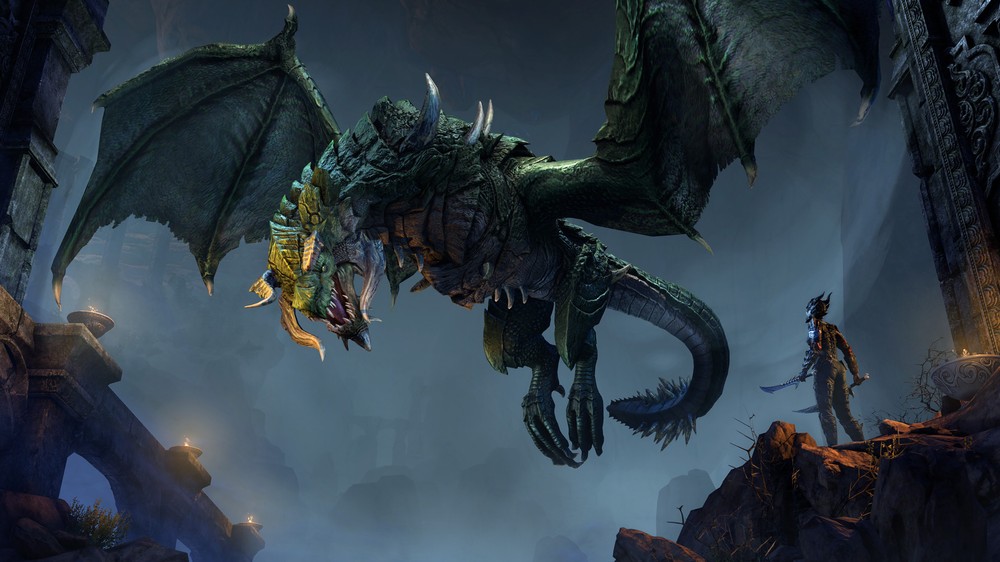 A Khajiit Necromancer would gain a double dose of mistrust anywhere else in Tamriel but here is the warm sands of Elsweyr it is necromancy itself that garners the most ire. Necromancy in itself is often disputed to be inherently evil as it disrupts the natural order of life. For this newest chapter of ESO, it is this viewpoint that comes to bear as the inhabitants of Elsweyr are plighted with necromancers under employ of the Usurper Queen Euraxia. She just so happens to be the half-sister of Abnur Tharn, yeah that guy from the main game for those who have played since the beginning. Oh yeah and he’s totally responsible the recent rise in fire breathing flying lizard sightings…gee thanks dude.

That aside Elsweyr has perhaps my favorite tutorial to date for new characters or players just joining ESO for the first time. After leaving the seemingly required starting chamber of the Star Haven Adeptorium, you quickly learn of your Dragon encounter before being asked to spar with the Grand Adept. As I walked through the Zen gardens of the main courtyard I just knew these serene moments were going to be shattered at any moment. True to form the Adeptorium is soon attacked by Euraxians and you must join the others to defend this peaceful place with everything you got. 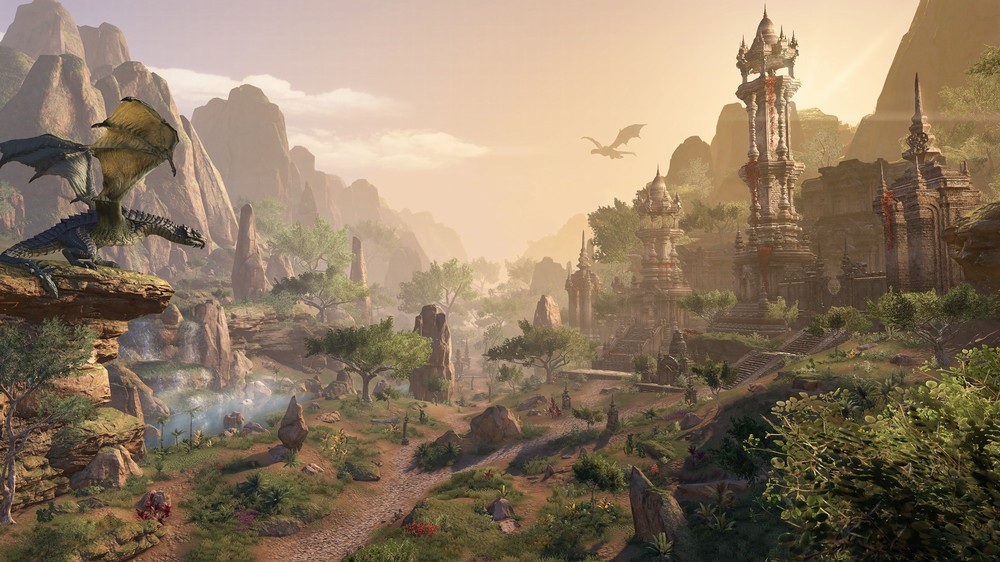 Unfortunately, your all isn’t quite up to the task of dragon slaying just yet. This is actually one of the things that I really enjoyed about Elsweyr. Unlike a certain entry in The Elder Scrolls franchise you are so not a chosen savior against all dragon kind. Instead you are a mere individual facing an unsurmountable mountain with bad breath. Regardless this first encounter is just an exhilarating taste of what is to come for players starting out as they progress through Elsweyr. I haven’t had that kind of rush since my first moments of running for my life in Skyrim. ESO has had plenty of great moments but dragons really upped the ante!

Now I know that world bosses have been beaten solo in the past and their difficulties have been adjusted over time to make them more of the challenge they are supposed to be. Elsweyr takes things up a notch with these new dragon world bosses and I love it for a few reasons. For starters the fight mechanics are varied and keep things interesting but it’s where the fight takes place that adds a bit of depth to the combat. Unlike Skyrim where dragons do their own thing around the map until you get too close or purposely make them mad, the dragons of Elsweyr park their massive selves wherever the spawn location is each time. These dragons much like Alduin and his kin believe that Elsweyr and probably the world is theirs so them sitting on their haunches waiting to be attacked is perfectly within their right. 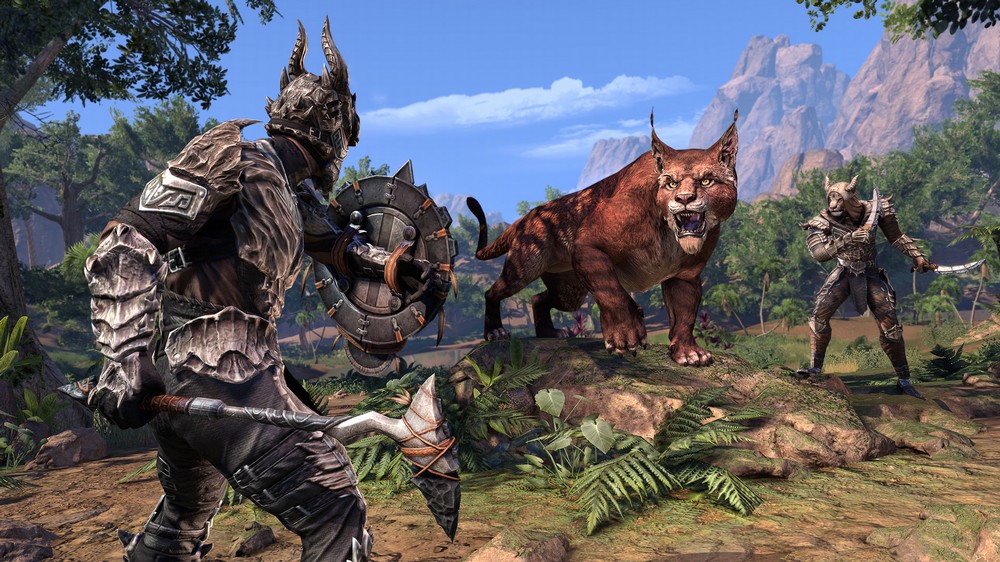 All is calm however until someone pokes the lizard and the overworld raid boss is triggered. As I dove into many a fire breathing, tail whipping, meteor summoning fight I never expected to encounter one thing. The moment I was on the receiving end of a Fus Ro Dah attack during one of these fights was a little bit terrifying. It was just awesome to hear those world uttered again in a title outside of Skyrim. Regardless though strap in and bring a party when chasing after them because these Dragons are not your average Skyrim nuisances.

As I mentioned before where you’re fighting is just as important as how you fight. Whenever the Khajiit homeland is mentioned you instantly think of a long flat desert with maybe an oasis here and there. That couldn’t be farther from what you’ll see in ESO’s newest chapter. Elsweyr much like Murkmire has different biomes of a sort. You will see some mostly barren areas but you’ll also traverse through lusher areas as well as various ravines and mountainous inclines. You also have beautiful locales like the eastern inspired Adeptorium and Rimmen with it water pool speckled streets to name a few. Much like with Murkmire we are seeing a different side of the Khajiit race this time outside of the caravan’s and often more nefarious visage we see them in all the time. 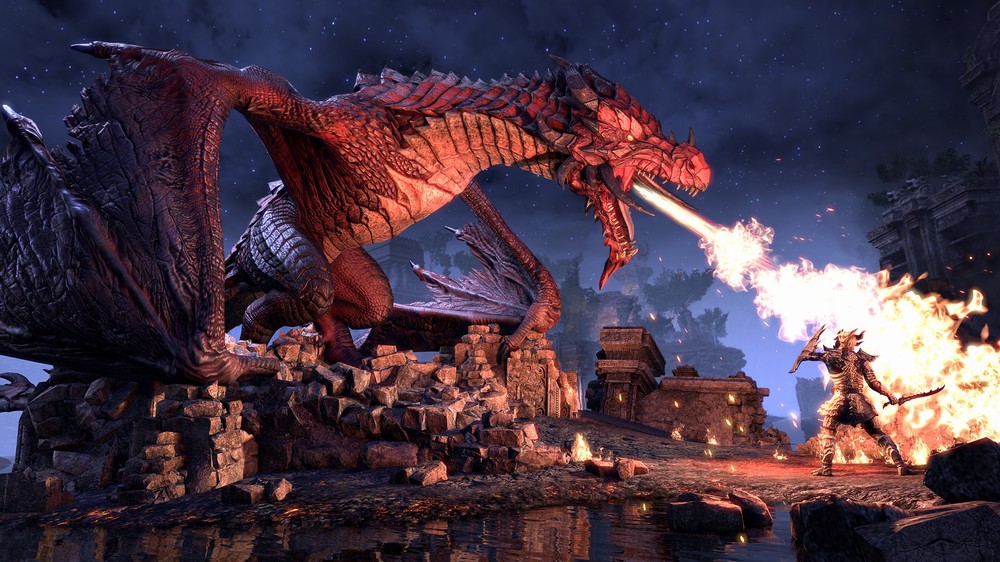 What I really didn’t see coming as well was the different kinds of Khajiit there are. Players have already seen one other type with the warrior mounts known as the Senche-raht. In reality there are 4 main physical form groups with varying sizes all tied to what stages of Nirn’s moons the Khajiit was born under. The first time I found a massive bipedal Cathay-raht in a town I wanted desperately to not piss it off. Most players are familiar with the more feline Suthay or Suthay-raht as it is the form you see most in Morrowind or Skyrim for instance. Lastly you have the Alfiq that excel in magical arts as well as being spies due to their similar appearance to normal house cats. Sneaky little kin they are.

Speaking of, I briefly mentioned that I prefer the rogue life in ESO but I couldn’t wait to try the Necromancer class. This class can be a real blast to play with the three skill paths Grave Lord, Bone Tyrant and Living Death to specialize in. For those looking for more hands on approach the Bone Tyrant is the Tank of the three offering abilities to boost your own Max Health, build up resistances and even inflict some serious damage up close by using the dead to reinforce your attacks. If you want to take a step back from direct combat then the Grave Lord option is for you. This path focuses on Elementalist attacks and summoning hoards of the undead to fight in your stead unless the enemy gets too close. 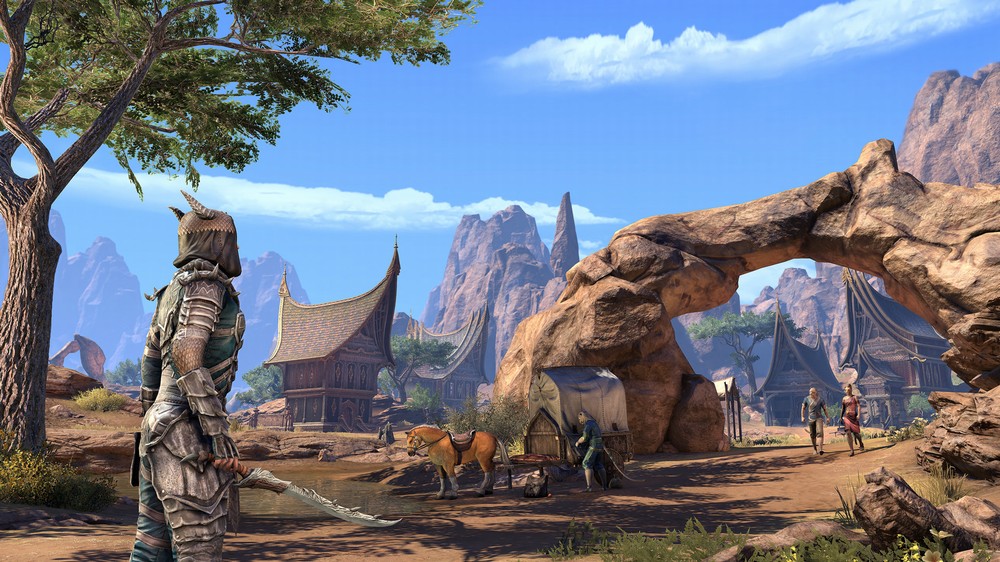 This is the option to choose for you DPS and crown control fans out there that want to do some real area of effect damage. I had a real tough decision to choose between this and Living Death. I am rarely one to charge headlong into battle so I choose the Living Death path for most of my review coverage. The reason for this was for tougher group activities like the world bosses and raids I wanted to do. The Living Death’s Ultimate Reanimate is a game changer in itself with the ability to resurrect 3 fallen allies around where you trigger it. As healers go this class is still quite vital and fun to play most of the time depending on the level of teamwork of your party.

Outside of combat, Elsweyr had a bunch to offer players with its various quests including another comical run-in with Rigurt the Brash. He’s not the only returning character either as we see good ole Cadwell for an active role in this chapter. As only fitting Razum-Dar is back for a bit of back history. Perhaps the most interesting character is Khamira, the Aide to the Speaker of the Mane, who clearly weary of the man responsible for the Dragon problem. She is very devoted to the Khajiit homeland and its people and perhaps the true heart of this chapter. 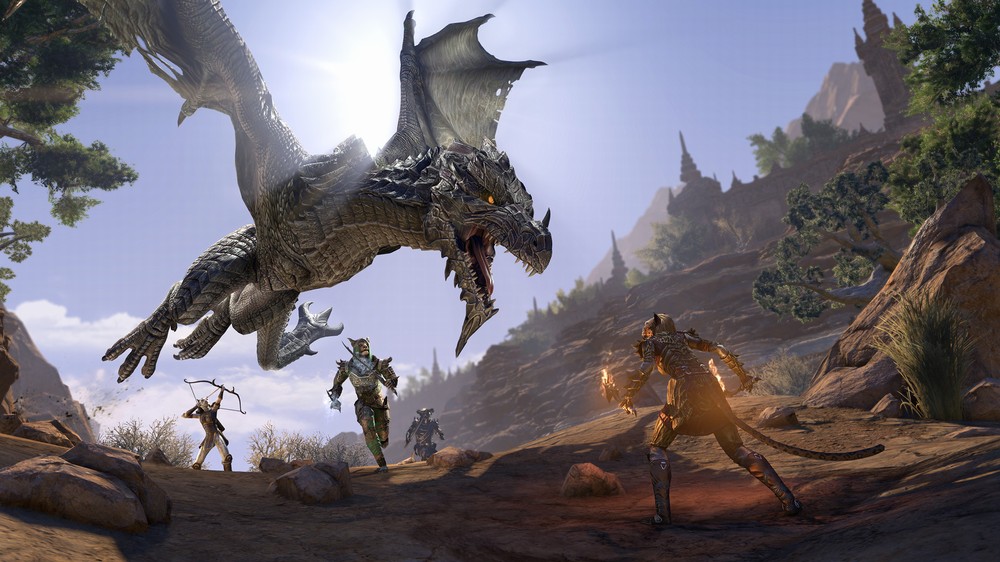 Elsweyr as a full chapter is currently only available to players either physically or digitally this time around much so you’ll have to seek out your favorite online store or local business to get your claws on a copy. For those that shell out the extra gold for the Collector’s Editions you are rewarded with goodies including an Exclusive Senche-Raht mount, a little Ashen Scar Jerboa pet, the Dragonbone outfit conversion and a Khajiit emote pack to better immerse yourself in the lore. This version, which I covered, is purrfect for newcomers as well as it includes the main game and both the Summerset and Morrowind chapter along with Elsweyr for $80.

The overall experience that I had with The Elder Scrolls Online: Elsweyr was better than I could have hoped it would be. Perhaps it is this one’s love for its kin or the thrill of engaging Dragons in combat as I did that made me fall in love with this chapter. This Khajiit has always wanted to see what their homeland had to offer and it was not disappointed by the work put into breathing life across Elsweyr’s warm sands. This one highly recommends checking out The Elder Scrolls: Elsweyr for PC today.