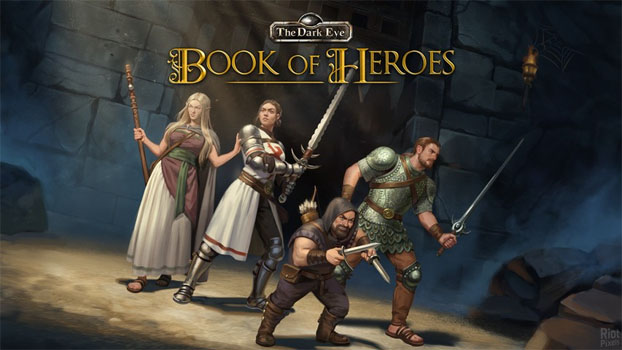 About as old-school as you can probably get.

The Dark Eye franchise is one that you don’t tend to hear about here in the States very often, which is a little surprising considering its popularity in Germany. This pen and paper role-playing game, now on its 5th edition, has found its way into the video game market over the years though my personal exposure has been limited to just Drakensang until now. With the release of The Dark Eye: Book of Heroes on PC, players can dive into new adventures across Aventuria.

Book of Heroes starts out with a rather cool tarot card intro with a fortune teller that acts as your character creation menu. Here you get to choose from the four races: human, half-elf, elf and dwarf before selecting one of twelve different professions. There are only four main professions that fit your traditional archetypes that the twelve professions such as the Assassin under the Rogue class or then paladinic Blessed Ones of Rondra under the Blessed Ones class. 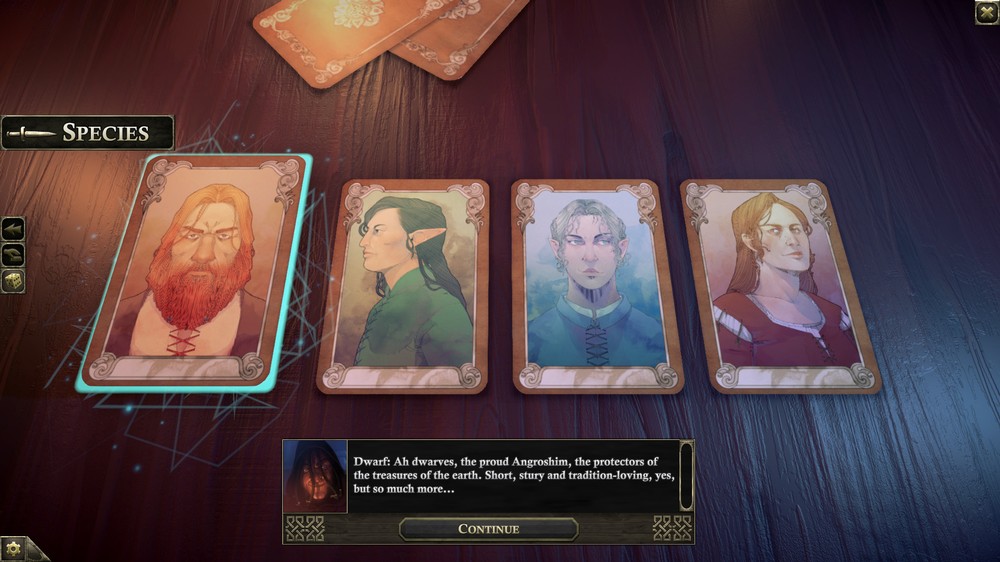 What I found rather interesting was the following origin and twisted fates that offered some rather diverse if not socially awkward scenarios. After that you choose one of the eight main storylines to pursue to set the course for your hero. I have to say that I admired the different options that they give you as it feels more akin to the tabletop experience that it spawns from. As with many a good tale you find yourself starting out in the Black Boar Inn which acts a hub in-between adventures.

This hub also houses your trader, forge, alchemic table, fortune teller, quest board and even an in-game manual posing as a bookshelf. Most of these won’t be used until you accrue enough resources such as coin and crafting materials but you have a tutorial quest of sorts in a dungeon underneath the inn. This gives you the general basics that you need to survive as you face this dungeon. Afterwards the real adventure starts as you head to the notice board to get your first quest. 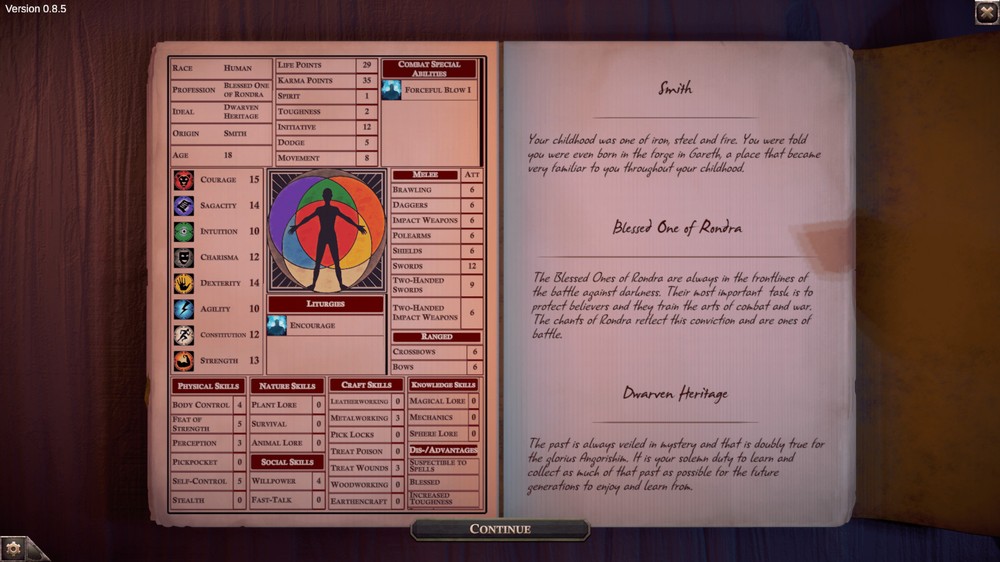 This is where I can see people getting lost on where to go to progress their main quest. The game does little in the way of nudging you in the correct direction, so you have to figure out where to go on your own. The trick is to read the current quest objective and then look for quests on the board that align with the right enemy type and/or location. You will eventually do each of the available quests at some time or another but it can come with a bit of dismay when you find you picked the wrong one for your current objective.

On the upside you will be earning Adventurer Points (or AP) to spend on activating a desired Progression Card via the Fortune Teller upon the successful completion of each quest. These cards, which you can only use a maximum of four at any given time, are the only way to enhance your current stats as well as unlock new skills and special abilities. A card that you favor heavily can be upgraded in the same manner as purchasing them but you are limited in how effective the cards are once any given stat is maxed out. 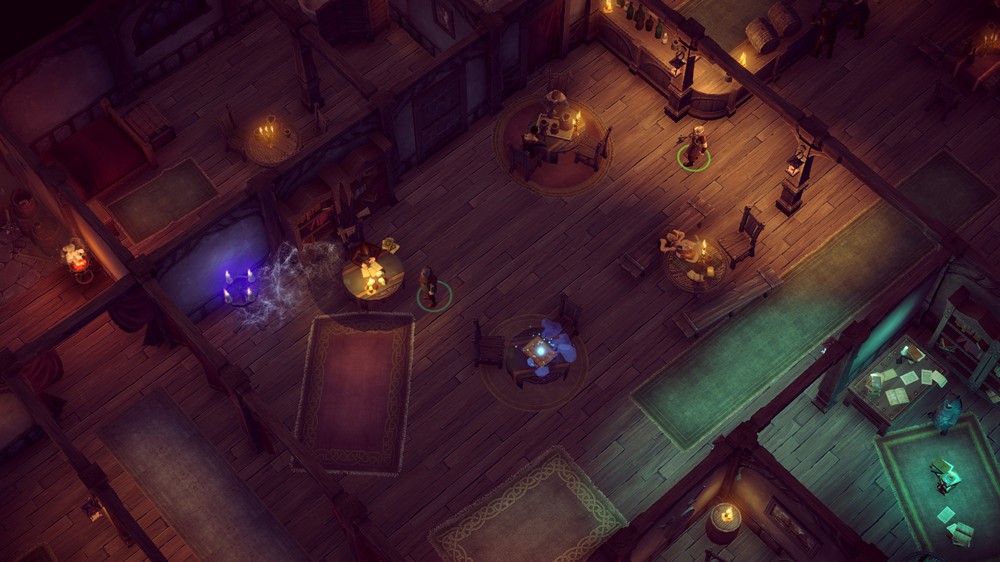 I say successful completions because there is a pretty good chance that you will fail one at some point for a couple of reasons. The primary reason will become abundantly clear if you play Book of Heroes by yourself. While you can do this game solo it is meant to be played with up to 3 other people online for more optimal outcomes. That is assuming all parties involved work together to succeed, as that is the ultimate goal regardless of player questline. I would definitely recommend the online method of play because your AI hired help in single player love to do their own thing unless you tell them to stay put. This included running ahead right into traps and into combat off screen which happened for me more times than I care to count.

Fans of older RPGs on PCs should easily fall right in step with Book of Heroes’ mostly mouse driven interface. The keyboard serves mainly as a means to pan the camera and use quick commands like skills and menus such as inventory and the map. You can opt to enable border panning with the mouse but I ran into a somewhat annoying issue of having to constantly move the camera back on my heroes as the various menus are situated on the edges of the screen. You can adjust the pan speed to keep the camera from careening off to the far edges of the map though. This is a personal preference of course, as I had no issue using the WASD keys for camera control. It should be known that there is no reconfiguration options, so some players will have to make do with what’s there. 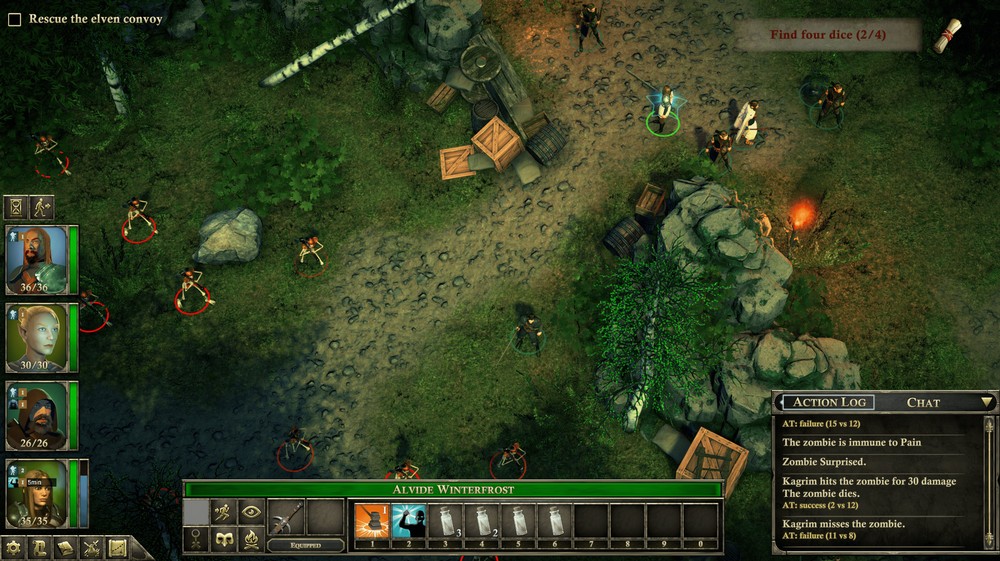 Another thing that you will realize is that you cannot directly control your AI party members like you can in Drakensang other than to tell them to stay put as you say, scout ahead to disarm a trap. So from a single player perspective keeping an eye on your hired hands is rather tedious. It’s also kind of a letdown that you can’t manually get characters in your party to perform a class-specific skill if you aren’t that class like healing or disarming traps.

It’s a good idea though to round out your team in any instance, as you really don’t need two of any given class unless you are trying for a desired solution to a quest if its giving you trouble as each quest is ranked with a difficulty level. Players can also cause the difficulty to spike by resting within quests, so being well equipped as well as cautious is paramount. Even with a full party you need to play to your strengths as much as possible. For instance playing as a mage you are not going to see traps or be able to disarm them as easily as a rogue. Even then a Rogue can fail the roll and set the trap off instead of disarming it. 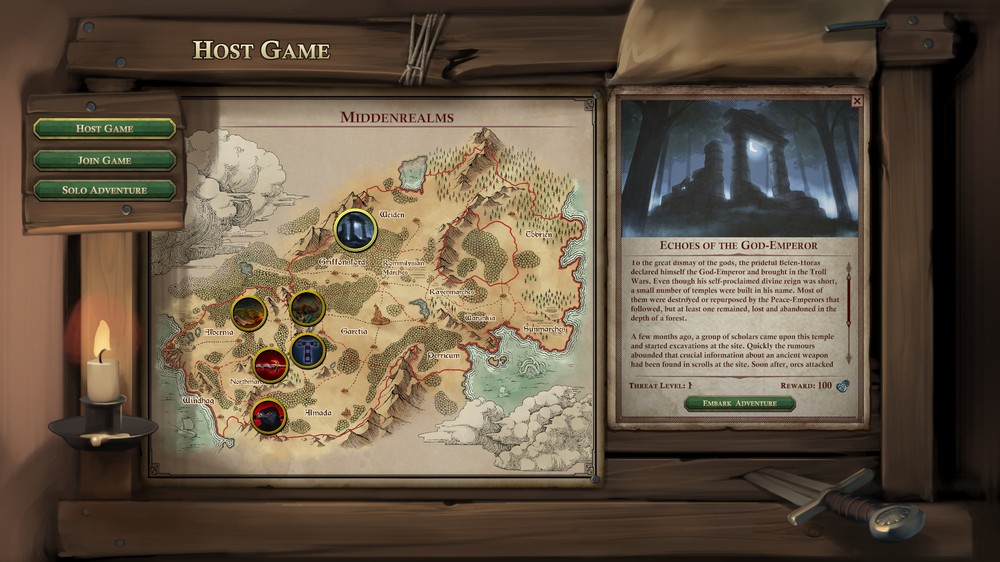 One of the things I like about Book of Heroes is its use of on-screen cues when you attempt anything that gives a nod to its tabletop origins. When you enter a new area you initiate a perception check roll based on your stats and a virtual roll. This allows the player to notice things like enemies, traps or chests ahead of time. As I created a Rogue Assassin for my first go I also got to experience the roll for stealth mechanic when using the Hide ability while sneaking up on enemies to get the drop on them. It didn’t always work but it was fun when it did for critical hits, especially at range.

Range is not only important from a mechanic perspective but a visual one as well. When you’re facing off against four or more enemies you need to be able to tell friend from foe. Book of Heroes is presented in an isometric view similar to Divinity or even Diablo. Zooming in and out with the mouse wheel makes keeping an eye on a grouped up battle or a wayward hire easier. Visually the various locales like forests, caves and of course dungeons look good as you uncover more and more of each map. I really enjoyed the clean menus and detail in the tarot cards you see throughout your adventures. 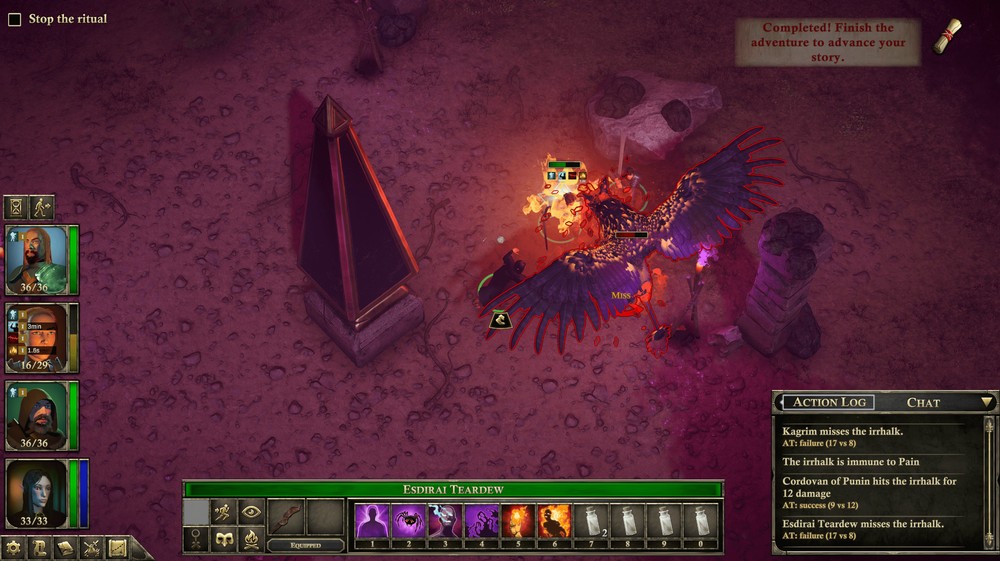 The maps when on an adventure most of all is true to the tabletop roots with more of it filled out as you explore. Whether alone with AI party members or together with LAN or online co-op you’ll get to explore each map fully as objectives, start points and the layout move around to change things up. If the achievements are any indication, it is encouraged even with eight different main stories to get through.

The Dark Eye: Book of Heroes is about as old-school as you can probably get with its presentation when it comes to a tabletop adaption. I actually enjoyed the slower exploration and combat mechanics compared to more modern action-RPG fare. The biggest thing about Book of Heroes is that it’s helpful if you know something about The Dark Eye franchise and its ruleset going in. It’s not a deal breaker if you don’t as you can figure it out with time. So if you are a returning fan of the franchise or enjoy slower paced RPG campaigns then check out The Dark Eye: Book of Heroes for PC today.