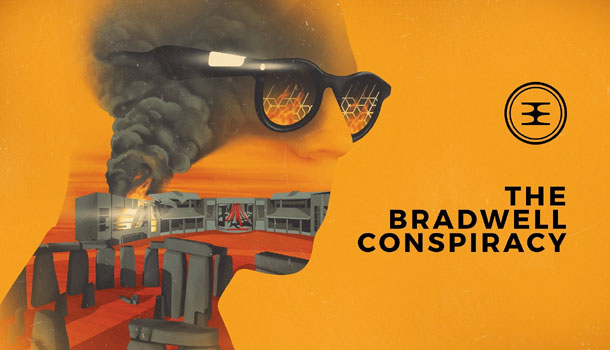 An awesome game that comes at the perfect time.

When it comes to gaming, the adventure genre is easily one of my favorites, and while the definition of that genre has changed drastically over the past three decades nothing has returned me to the roots and core principles of adventure gaming like The Bradwell Conspiracy. Combining the best elements from established games like Portal, The Stanley Parable, and Valley, this classic adventure is all about exploration, gathering clues, and puzzle-solving. With no weapons or combat, The Bradwell Conspiracy is the very definition of a casual adventure game that will appeal to gamers of all ages.

The setup is simple and mysterious. You play an unnamed character who regains consciousness after a massive explosion at the Stonehenge Museum. As you stumble around trying to escape the chaos you’ll be assisted by the Guide, a central computer that communicates through special glasses assigned to guests as well as all the employees. These glasses are a critical component to the game design as each pair comes with its own built-in security clearance as well as the ability to send and receive photos. As you might guess, you’ll often need to find new pairs of glasses to access new area of the complex, and the photo option becomes a key element to gameplay. 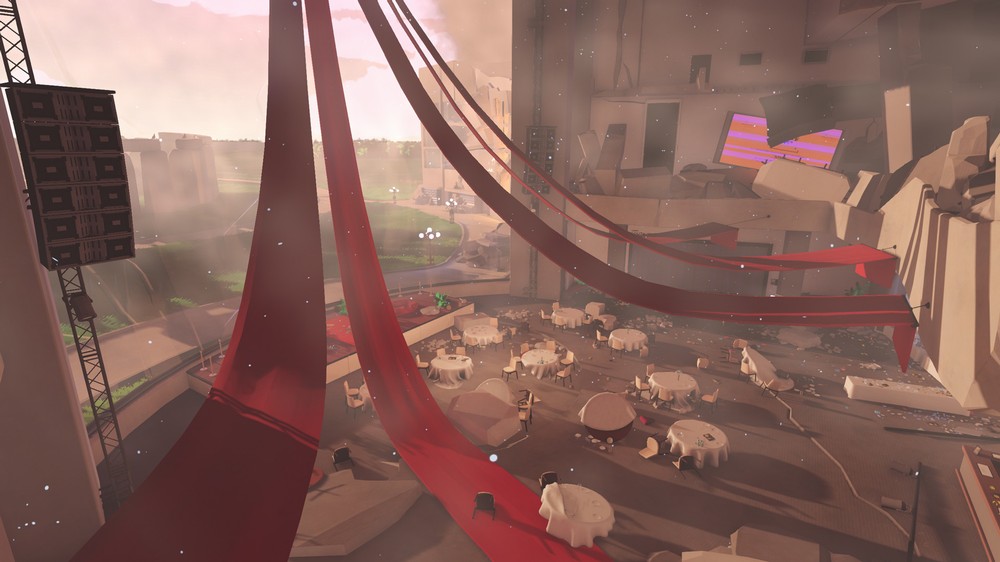 Early in the game you will meet up with Dr. Amber Randall, although you will never come face to face until late in the game. You’ll be working quite extensively with her in navigating the massive underground complex but, as you learn within seconds of starting the game, you have lost your voice due to smoke inhalation. At first I thought this was a clever gimmick so the designers didn’t have to write or record dialogue for the protagonist, but it’s actually much cleverer than that. Instead, you will communicate with Amber by taking pictures of your surrounding so she can guide and assist you. This includes non-puzzle elements as well; as she will offer up commentary on just about any picture you take. Amber will also send you pictures that are often critical in completing puzzles or finding a certain location.

As you explore the massive underground complex a dark conspiracy begins to unravel, and merely escaping becomes a side quest to saving the world, but you are going to need one last tool to make that happen; a portable 3D-printing device capable of reorganizing matter. Basically, you can fire the “gun” at certain objects to store their matter and create a blueprint for that item, which can then be recreated multiple times provided you have enough matter stored up. Ultimately, this means you don’t have to recreate the same item you disintegrated, and there are these matter bricks scattered about the game you can collect to boost your reserves. The game also cleverly strips you of all blueprints and matter reserves between key areas of the complex. 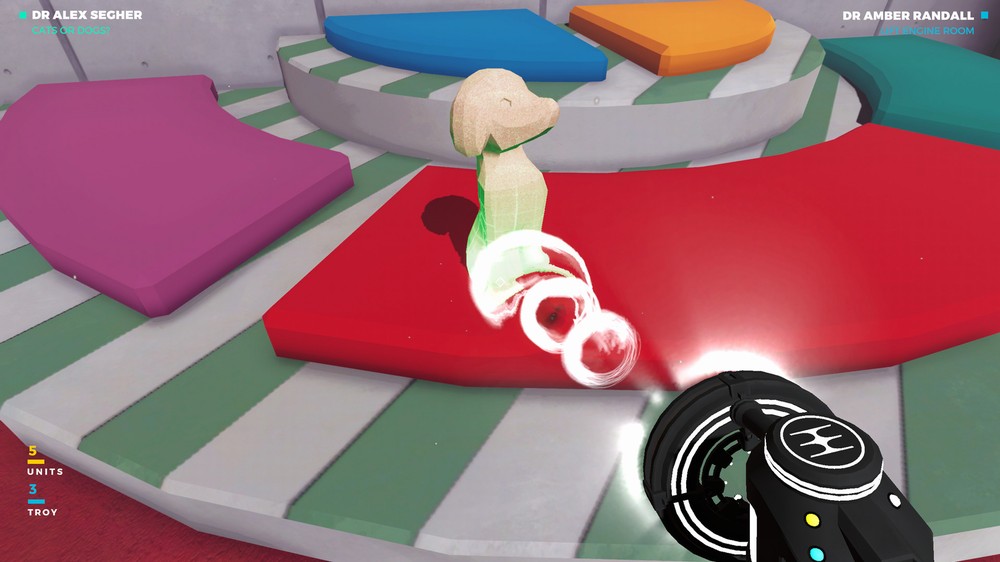 This 3D-printing concept works great in an adventure game that would normally require you to collect items and maintain an inventory for later use. Now, you simply disintegrate everything you can and recreate the items you need when you find the place to do so. Sometimes you don’t even need to find the original item as several blueprints are lying around as collectibles, ready to be loaded into your printer. I was impressed with just how original this 3D-printing concept turned old-school puzzles into something refreshing; puzzles like circuit completion and pipe connection mini-games. You’ll even need to use this tool to build bridges to navigate the levels.

The Bradwell Conspiracy does a great job of creating the illusion of a vast world to explore while in reality your path through the game is fairly linear, although not entirely obvious. There were several times during the 6-8 hour adventure where I either got stuck on a puzzle or just figuring out where to go next. Thankfully, Amber seems to sense your lack of progress and will offer varying degrees of hints to help you along. Locked doors will keep you from straying too far off mission then unlock when it’s time to move on. During your exploration you will also want to read every email you can find, listen to audio logs (often embedded in emails) and check out dozens of books scattered about the place. Some of these provide key backstory elements and clues to puzzles, and all of them count toward your three categories of collectibles that reward you with achievements for finding them all. 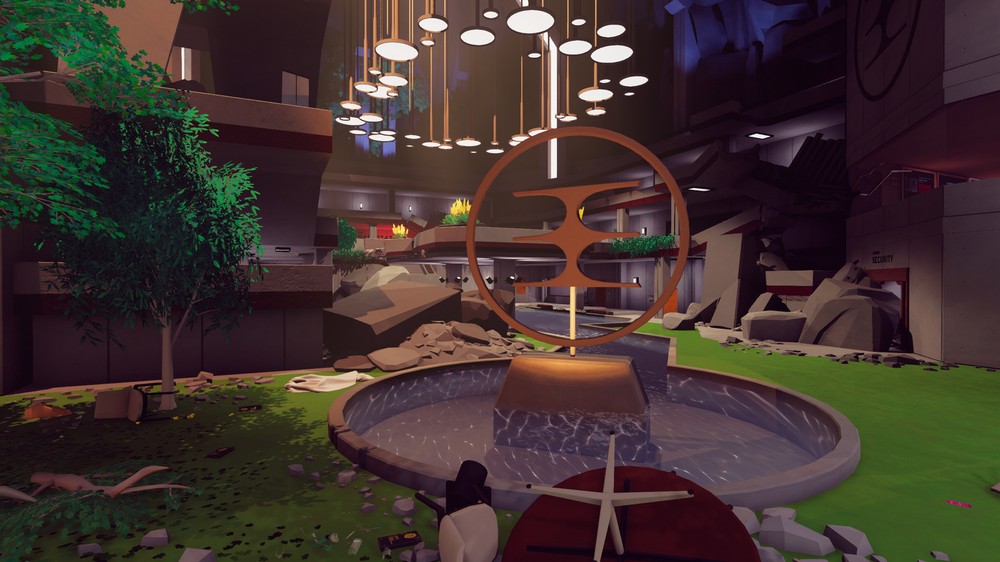 The Brutalist art style used to create the world is refreshingly simple, maintaining a pleasing and colorful retro aesthetic. With simple shapes and minimal textures, it never attempts to go for photo-realism yet somehow creates a world just as fascinating as any BioShock game. In the opening moments of the game there is a lot of backstory literally written on the walls, and the walls are routinely loaded with screens and posters that immerse you in this not-so-distant future and corporate culture.  I was surprised to see a lack of support for 1440p or 2160p resolution even though this particular art style wouldn’t have benefited from it.  The game ran flawlessly smooth at 1080p

When it comes down to tech and performance there were a few observations I had between the Xbox One version and the PC, but nothing as drastic as to justify separate reviews or scores. Playing on the Xbox One X I noticed some framerate drops and excessive motion blur when spinning the camera from side to side. The controls were also overly sensitive making it hard to place the cursor on smaller objects like books and it was nearly impossible to scroll through emails. All of these issues seem to resolve themselves when I switched to the PC version that offered a lot more settings to dial in the perfect experience for a wide range of PC’s. While the PC admittedly offers a noticeable improved experience, I can’t help but feel this was exaggerated by me playing the Xbox version first. Unless you are doing side-by-side comparisons most gamers will never know the difference, and the Xbox is perfectly fine. The game is just so much fun I want you to play it on whatever system you have available. 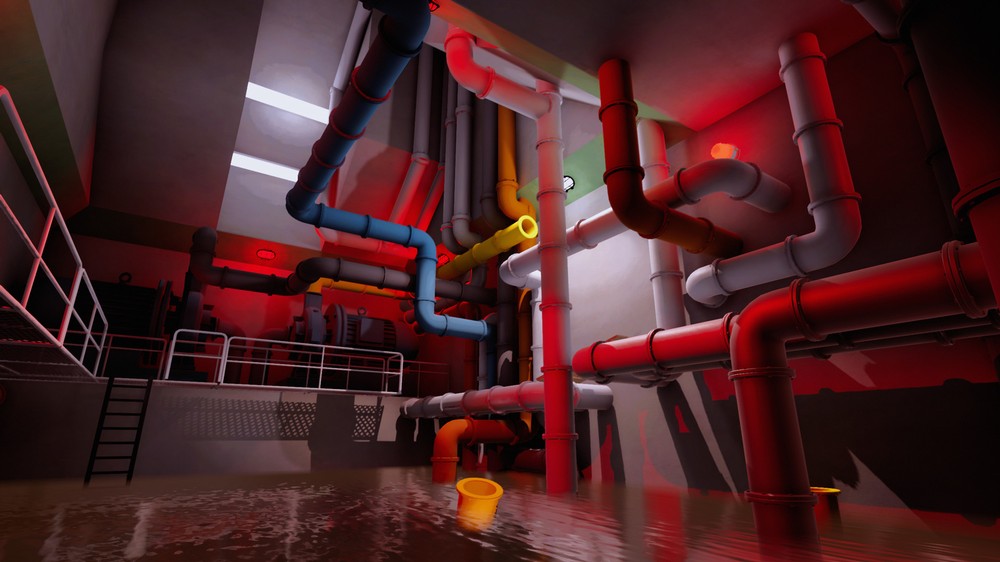 The sound design is exceptional with some truly creepy music that reminded me of some early John Carpenter scores, and the sound effects were equally as good and perfectly placed in a spatial sound design that immersed you in the environment. Early in the game there are these hanging light fixtures that are swaying in the breeze creating this haunting wind chime effect. The voice acting talent really steals the show though. The character of Amber has so many lines of dialogue and she continually goes off on tangents or makes weird jokes. The only small issue I had was near the end of the game where she seemed to get stuck on this one line of dialogue about “smelling flowers”. And kudos to the designers for maintaining a complete transcript of all dialogue, so I could go back and refresh my memory on previous conversations.

The Bradwell Conspiracy is an awesome game that comes at the perfect time. In this age of countless shooters, brawlers, and high-energy action titles I can’t tell you just how refreshing it was to sit back and explore and solve puzzles. It was like reliving the days of Myst back in the 90’s and just as satisfying; especially on some of the brainteasers found in the later chapters of the game – I’m looking at you Energy Cell #3 laser puzzle. You’ll get that reference after you play the game. 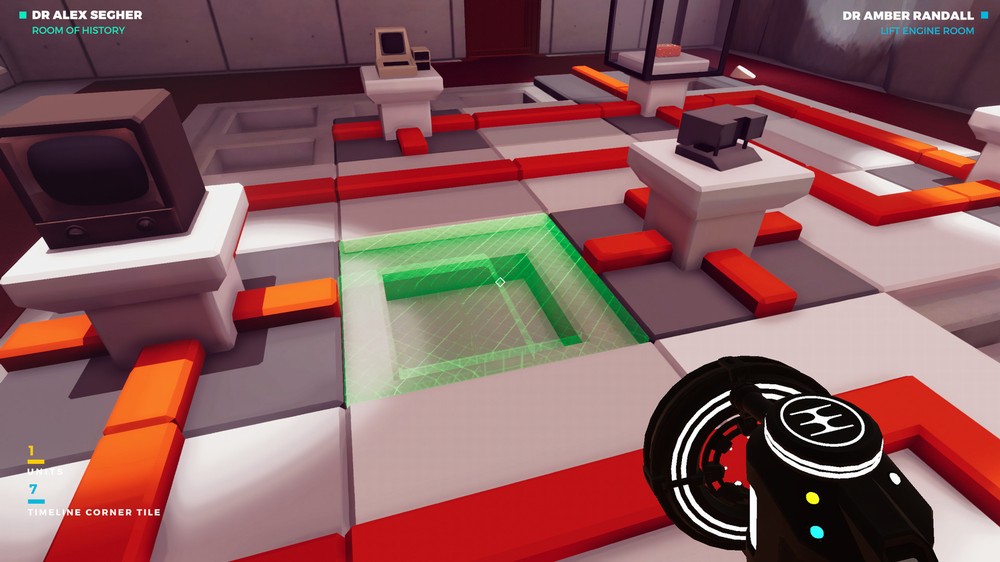 Expect 6-8 hours of gameplay based on how good you are at solving logic puzzles, and since the game is fairly linear there is little incentive to replay unless you need to find missing collectibles to earn those achievements. I ended my first game with 90% of emails and voice recordings, and 70% of book covers, but as much as I loved this game I felt no immediate desire to replay the entire game to find them, although knowing the solutions to the puzzles and the primary path through the game should cut several hours off the play time.

If you have any love of the adventure genre; especially classic adventures from the 90’s then I highly recommend The Bradwell Conspiracy. It’s full of exploration, great puzzles, fun dialogue, and an interesting story that manages to offer up a sinister twist. It doesn’t really matter which system you play The Bradwell Conspiracy on; just make sure you play it. 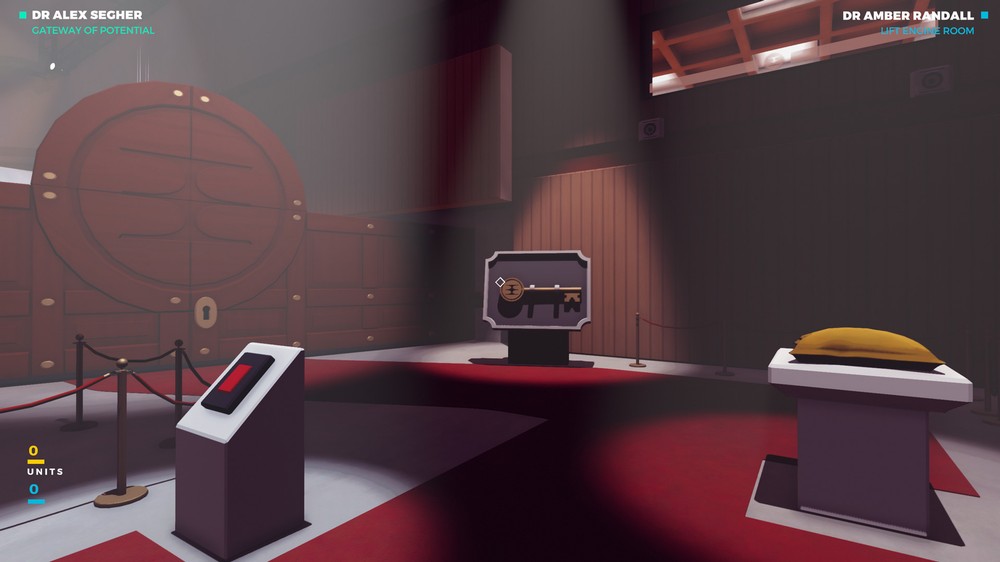 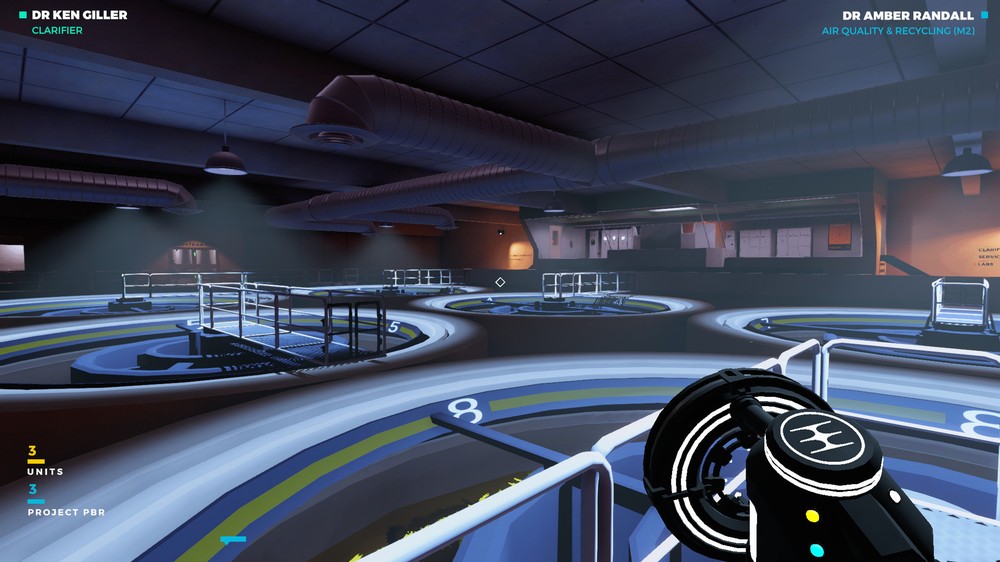 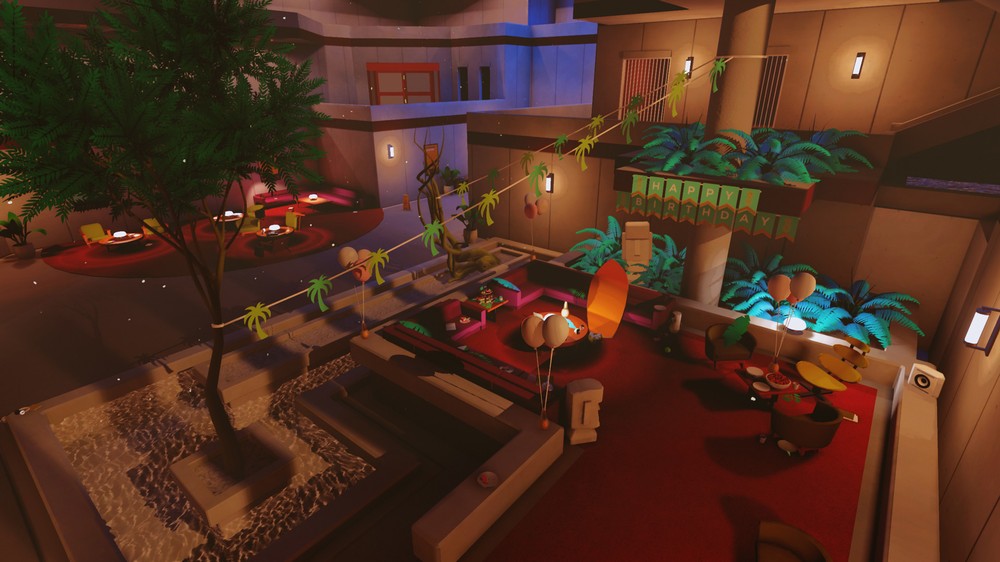