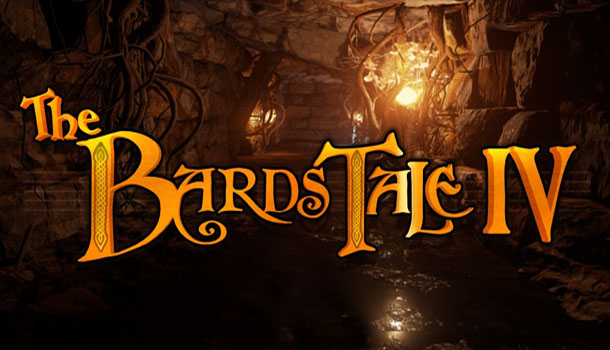 - Basic character creation
- Models could use some polishing

Bards Tale IV: Barrows Deep, developed and published by InXile Entertainment took a whopping 30 years to release and I can confirm it’s vastly different than Bards Tale III: Thief of Fate. Regardless, InXile has had to drastically revamp its gameplay from the previous installment and move to something slightly more in line with the 2004 release “The Bards Tale” which was released by them but in no way was tied to the IP that was owned by EA at the time. Another key note is that this was funded by Kickstarter with over 33,000 backers. Full disclosure, Bards Tale III came out on my birth year so no, I have no idea on the history of Bards Tale the game aside from what I’ve uncovered researching some backstory.

You’ll start your adventure with a default character you can keep for the rest of the game or create your own bard or other class with a choice of a few species of humanoids to continue. I stuck with a bard just to keep things simple and keep to the aesthetic of the game. Choices were very limited in regards to customization it was pretty much a choice of female, male and then a few voices regardless of which race I chose. You also don’t do anything regarding stats such as intellect, strength of dexterity. Combat is not what you would expect from a game in 2018 but fits in well with the dungeon crawler aspect as it takes place in a grid of your party versus the enemy and you spend action points to either move or use attacks, different attacks can use varying amounts of points so while you may have a party of six fighting a party of four don’t just get to pulverize the enemy with sheer number. 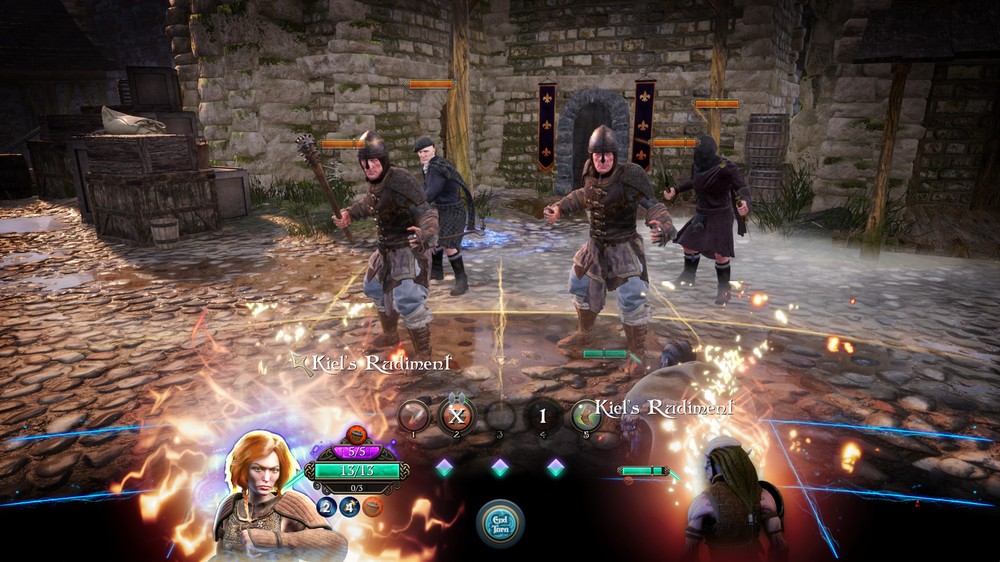 You will of course outfit your bard, or other chosen class, with items you will find or buy throughout your travels with different sorts of weapons and armor and customize your party .speaking of weapons and armor, don’t think that just because you found a great piece of armor you’ll be able to use it. Character building is pretty intense, as there is no redoing your characters if you put points into something you don’t like or doesn’t benefit you such as specializing in heavy armor but using light armor.  You’ll get no bonuses until you replace them or realize there are penalties for mastering one ability over another.

Spells and abilities in combat can really turn the tide and you can use them in creative ways such as using a levitate spell to fling an enemy onto a different grid space altogether and potentially interrupting the action he was about to use. You also have to be careful not to use your supplies all willy-nilly; you can’t just simply go buy a stack of potions from the next vendor you see. Bards Tale IV has a pretty punishing crafting system.   I say punishing because the ingredients to make potions are as rare as seeing someone selling it themselves. 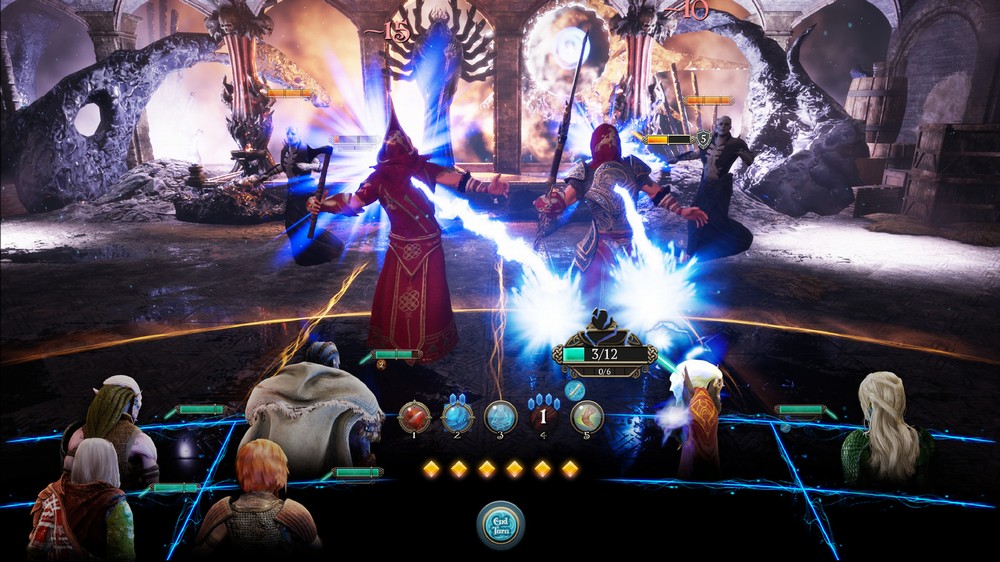 Bards Tale IV: Barrows Deep at first glance appears to give you the freedom like titles such as “Skyrim” with its amazing open world adventuring but you’ll soon realize, it’s all a lie.  There was never an open world, just like there was never any cake. It uses creative design with its lighting, free movement, lines of sight and map layouts to think you are traversing something of your own accord when in reality it’s a completely linear and you never had a choice in the matter. It didn’t take long to realize this design limits many actions such as sneaking free roaming to explore. Actions I take for granted in normal RPG games such as jumping and ducking to hide are also non-existent; there is no constant rabbit jumping happening here or stealth mechanic.

While Bards Tale IV is in the dungeon crawler genre; the place I ended up crawling to the most was the adventurer’s guild as once I completed a quest I had to return to them and turn in and pick up another. It isn’t just a quest hub though as the same adventurers guild is the entity that allows you to further increase your characters masteries of your chosen spec, they have to approve you moving onto higher tier abilities, kind of a strange mechanic but I could accept it. 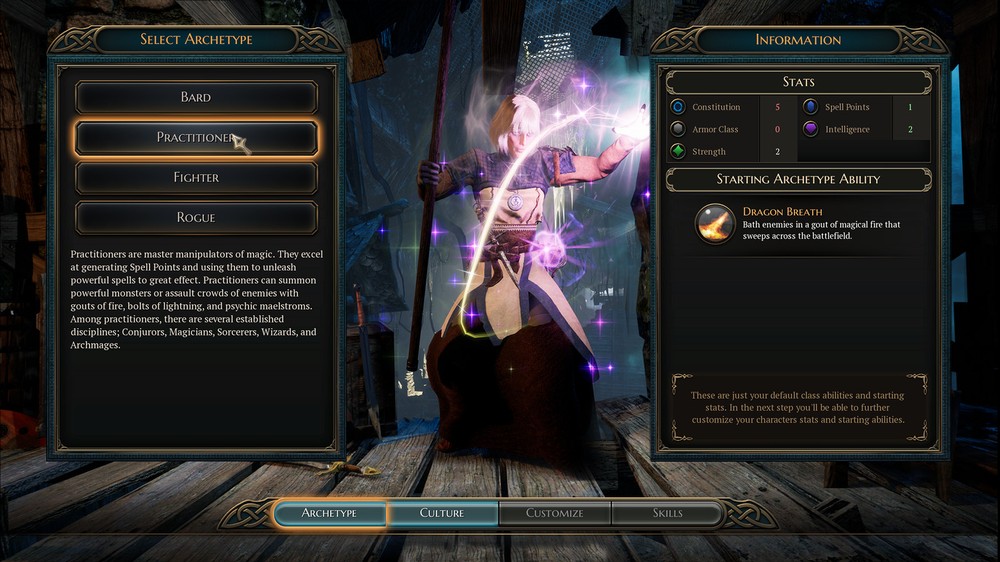 If I didn’t talk about the save system I wouldn’t be doing this game justice. Save games are done manually at “luck stones” which will make it so that you can come back to that location if you die or have to reload, obviously, but the most interesting part of the “luck stones” is the sacrifice mechanic. You can choose to sacrifice a newly found luck stone for experience, without saving, to help you further improve your party. It’s an interesting mechanic that really makes you question how prepared you are and how much are you willing to risk to move on knowing you will have to reload from something you might have saved hours ago.

One thing that you have to keep in mind with Bards Tale IV is that this isn’t a AAA title, so sometimes things don’t look nearly as polished, but I wouldn’t allow that to detract you from purchasing it.  Sure, many characters are kind of stiff and their faces look weird but the true magic of Bards Tale IV is in the dialogue and music. You will spend quite a bit of time reading and listening to characters banter back and forth amongst themselves and also it really helps with the overall world building of the game. As far as listening goes, the music in Bards Tale IV is quite good, as it should be in a game about a musician, but InXile did a terrific job in making sure the ambient sounds and music you experienced while either underground or while waltzing on a country road just fit. 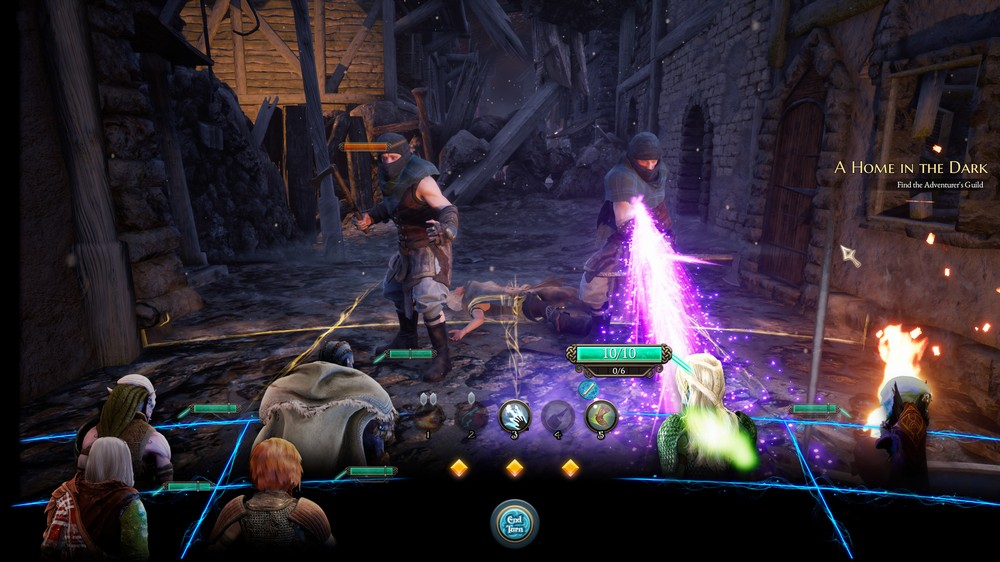 InExile has done a pretty good job at bringing a dungeon crawler that truly hadn’t shown its face since 1988 and done their very best to modernize it for the gaming world. I hope that others find it as fun and frustrating as I did with its mix of puzzles, riddles, combat and overall linear gameplay; something we don’t give enough credit to in this day and age. It might not stand out for being the prettiest but it will stand out.