The Banner Saga 2 Review – Xbox One

A must-buy for current fans and newcomers alike.

One of the biggest foes that gamers face every year isn’t found in some digital world but instead on their wrists, phones or walls is time. The sad fact as gamers is that there are so many titles coming out each year is that we often miss out on some pretty amazing releases only to wish that you had had the time later on when it’s sequel comes out. Such is the case for Stoic’s newest strategy RPG The Banner Saga 2 for the Xbox One.

The thing about The Banner Saga series is that the story really is a saga so for those that didn’t play the original you are really going to miss out on some of the intricacies such as character motivations. I always felt like there was some underlying truth or secret that I wasn’t seeing during my playthrough so my experience wasn’t perhaps as impacted as much as other players. That said The Banner Saga 2 definitely does have a very strong narrative and drive for returning fans and newcomers alike to enjoy.

Newcomers can watch a basic recap of the overall events of the first Banner Saga before selecting which of the two main characters caravan leader Rook or his daughter Alette will lead those under its banner to the hopeful safety of Aberrang from the growing threat of the humanoid stone beings known as the Dredge. Players of the original game can import their save files into this one to carry on where they left off. This option is particular nice as The Banner Saga 2 quite literally picks up after the end of its predecessor with the start of Chapter 8. 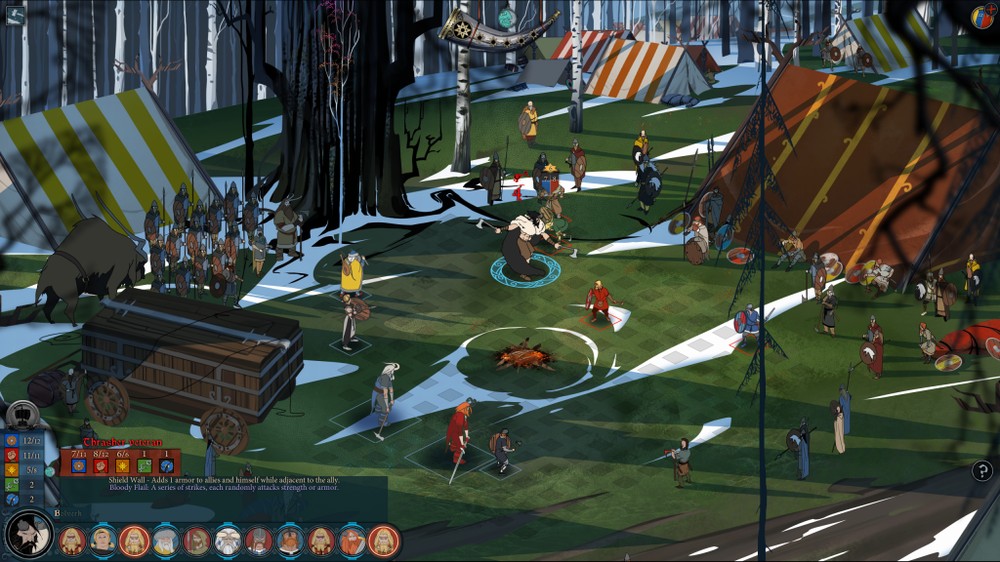 The quick lesson that you will learn in this strategy RPG is that you can’t save everyone no matter how much you want to. Every decision you make as Rook or Alette can be fatal for some of your caravan and you will be judged by your actions by your caravan. I learned this real early on and it paved the way for the rest of my experience for better or worse. Nothing is as it seems as there is always the possibility of death, mutiny and hope at every turn. Your very actions can bolster morale or send it sinking faster than the Titanic.

Morale is one of many factors that come into play as you make your way towards Aberrang each just as important as the last. Supplies and Renown are also key elements to your overall survival. Your choices and the following consequences will alter morale sometimes almost immediately while others won’t reveal themselves until later. The choices found at nearly every turn big or small are some of the toughest that I’ve ever had to make in my gaming experience. The choice between stopping to give aid with limited resources with the hope of finding aid of your own or passing them up to continue turning a blind eye to their distress is a hard one in the 12 or so hour campaign. 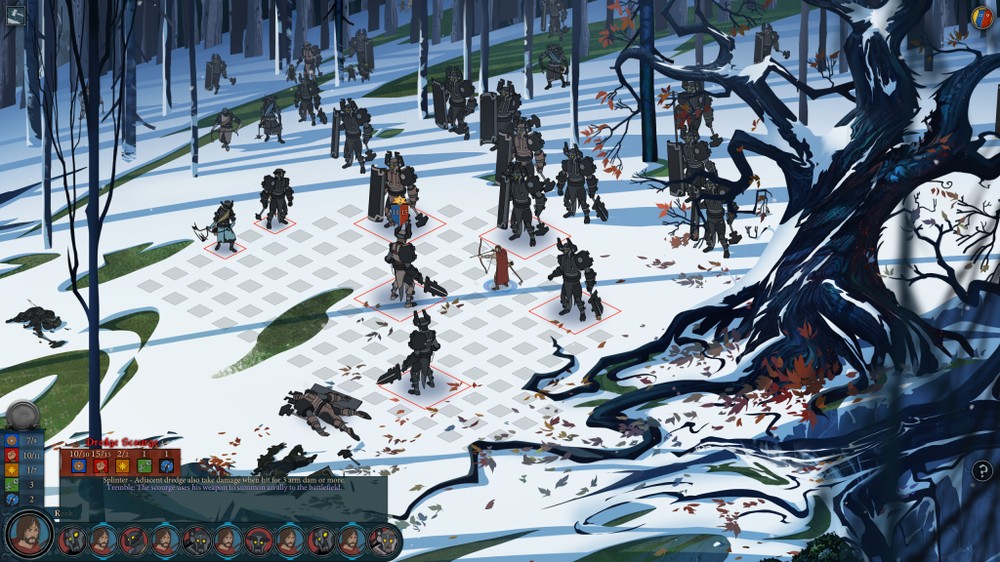 Often you choices will inevitably lead to battle where you have to defeat enemies that have sprung traps or Dredge that attack if you stop to clear a blocked path. Odds are that you will suffer casualties based on choices some even permanent to playable characters during combat so your decisions really do matter here off and on the battlefield. Battle takes place on beautifully created and blended maps that take into account what was happening at the moment before the fight. Seeing clansmen chopping wood debris on the edge of my battlefield as I battled Dredge was a level of immersion that I haven’t seen in well… any turned based RPG that I’ve played.

As with most Strategy RPGs, battles take place on an isometric battlefield where each side makes its required allotment of moves before their turn ends and the enemies do the same. While Alette or Rook, both hunters skilled with a bow, is mostly present your party can be comprised of trained human clansmen, the strong and towering horned giants called Varl and the newly added Horseborn (centaurs) race. Each unit takes up their own amount of grid squares taking in consideration of their size limiting their movement around environmental obstructions. A human for example only takes up on grid box while a Varl takes up four so sometimes destroying obstacles is the only way to allow movement or even hit enemies using it as cover. 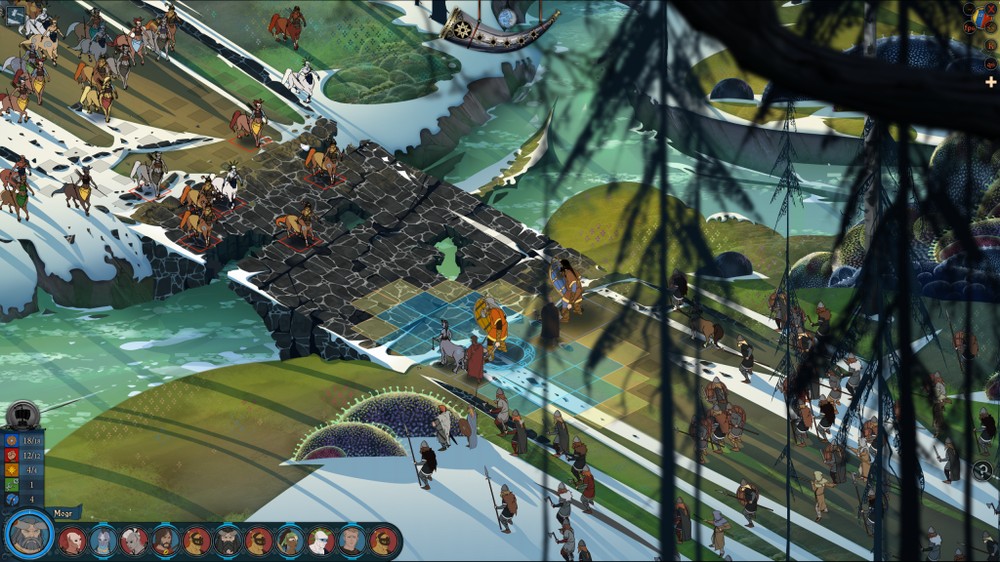 Defeating enemies will earn you Renown points that can be used outside of battle in a number of ways but much like your dialogue choices it’s a hard choice on what to actually do with it. Do you spend the points to make your characters stronger or trade renown for needed supplies instead? You need supplies like food to keep your caravan from starving but you also want to make your playable characters stronger to endure tougher challenges later on. The fights are not exactly easy but then again I don’t know if the experience is tailored for a continued campaign or if only your choices affect only surviving playable characters and the story.

No matter your choices, The Banner Saga 2 has a strong narrative and cast of character that I fell in love with just as much as I did with the stunning art design. The game features a completely hand drawn art style that reminds me of Don Bluth films mixed with a bit of high fantasy Tolkien flair. The art even when hair or fur blows in the wind is breathtaking and the way that the developers blend battlefield and backdrops is just beautiful. The music also adds to the somber yet heroic struggle to survive that you’ll endure but it fits perfectly with what’s going on in an unobtrusive way that is enjoyable.

The Banner Saga 2 is the type of title that really made me sit up and take notice of a series that I should have checked out from the beginning. Its little intricacies both visually with its amazing art style and its complexity of it characters and solid storytelling are something that should be viewed by as many gamers as possible regardless if they are good at strategy RPGs or not. The combat is solidly executed with every win or loss meaningfully integrated into the very outcome of decisions that came before or those that follow. The Banner Saga 2 for the Xbox One is a must buy for current fans and newcomers alike so check it out via the Xbox Marketplace today. 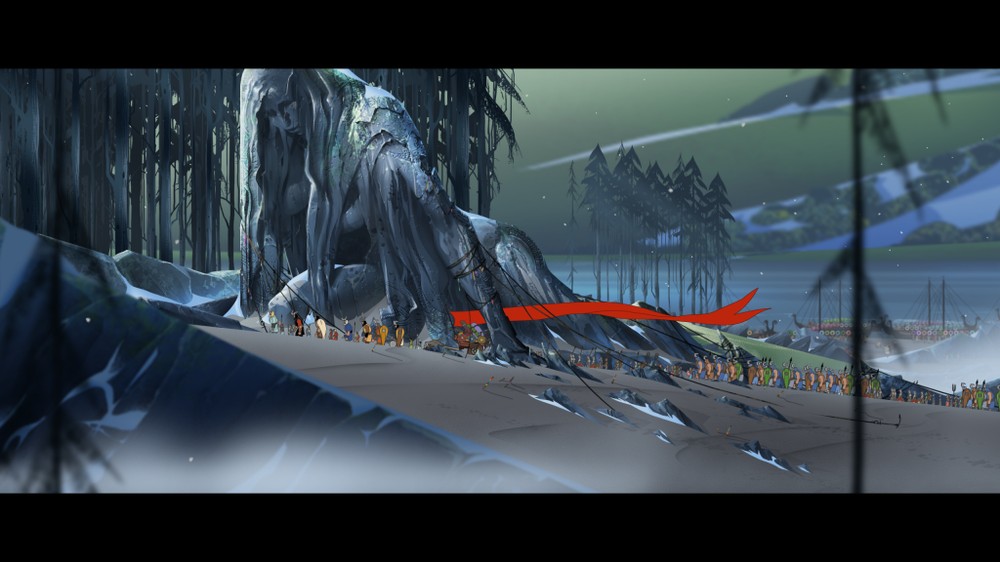 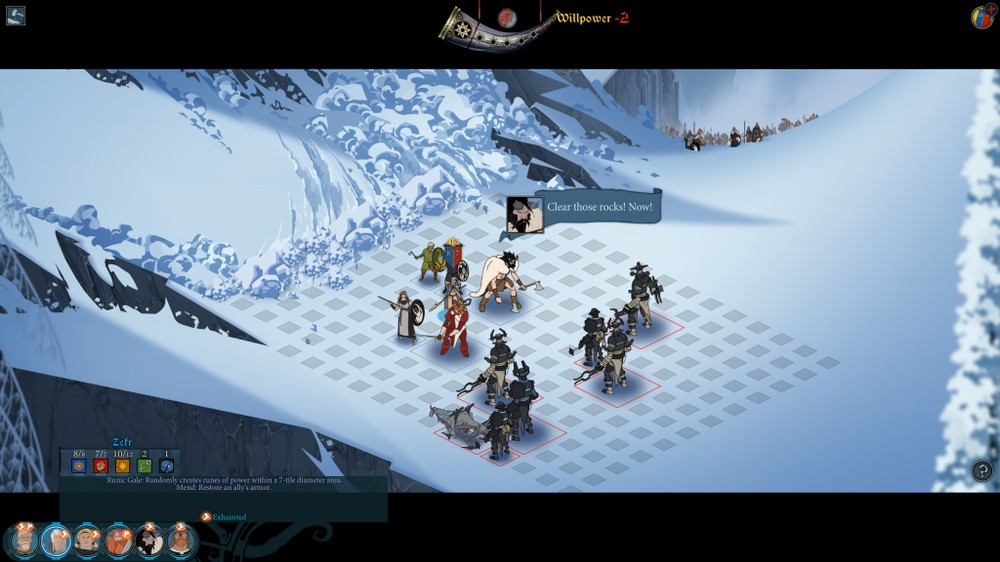 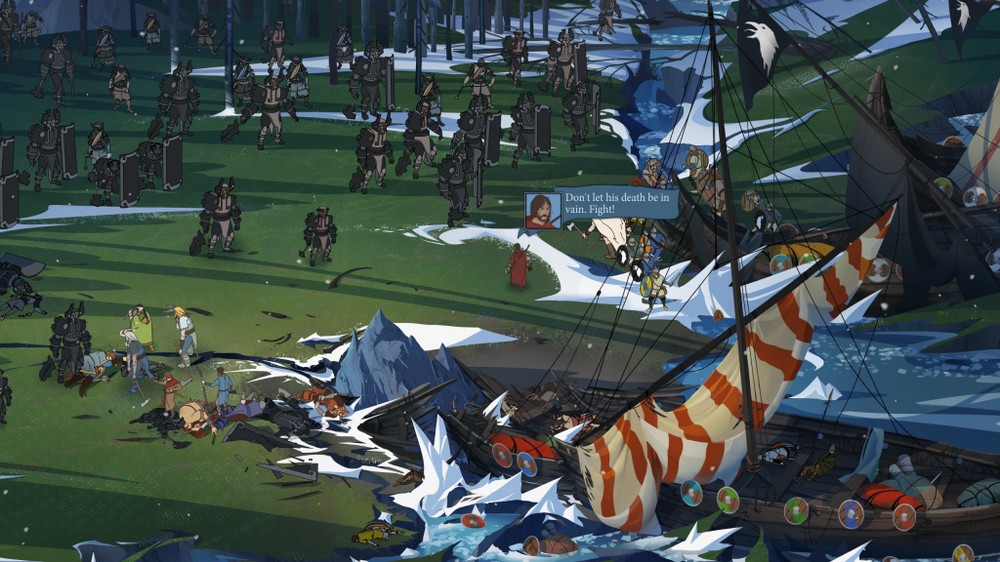 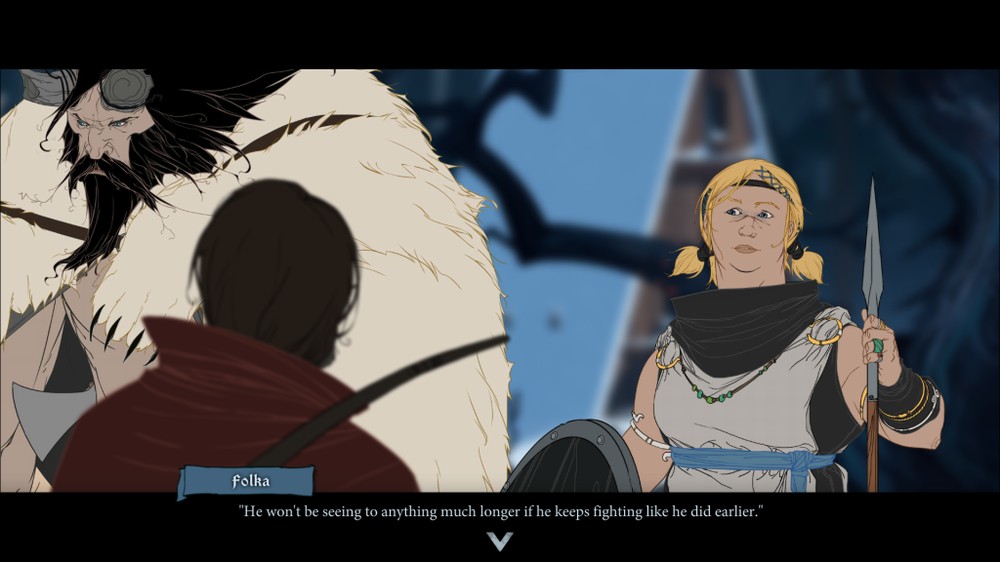 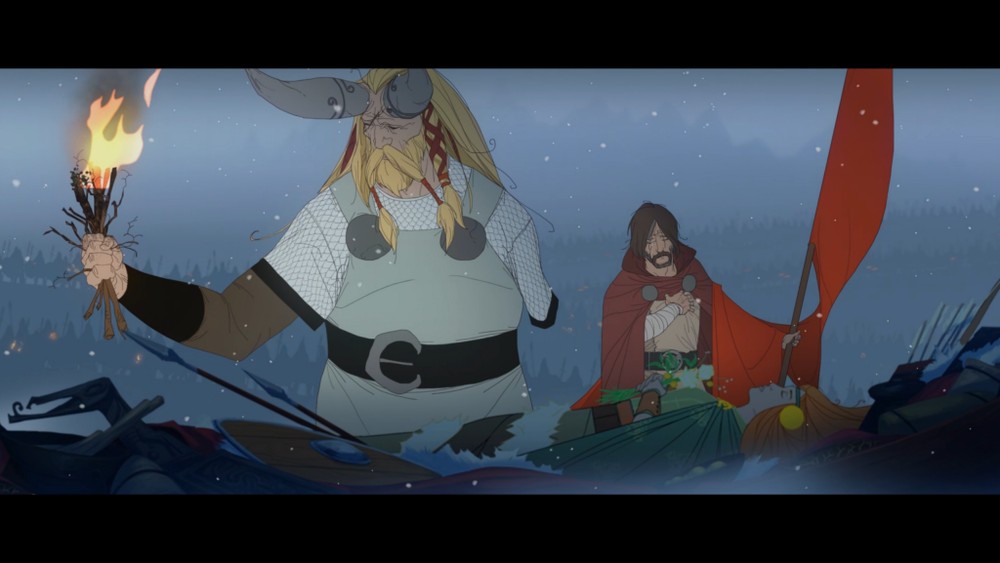 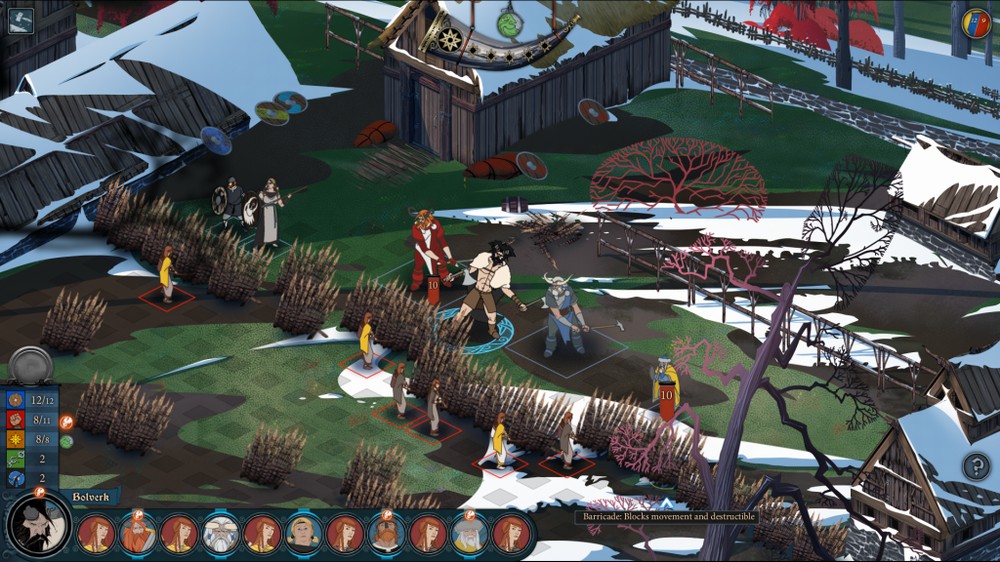 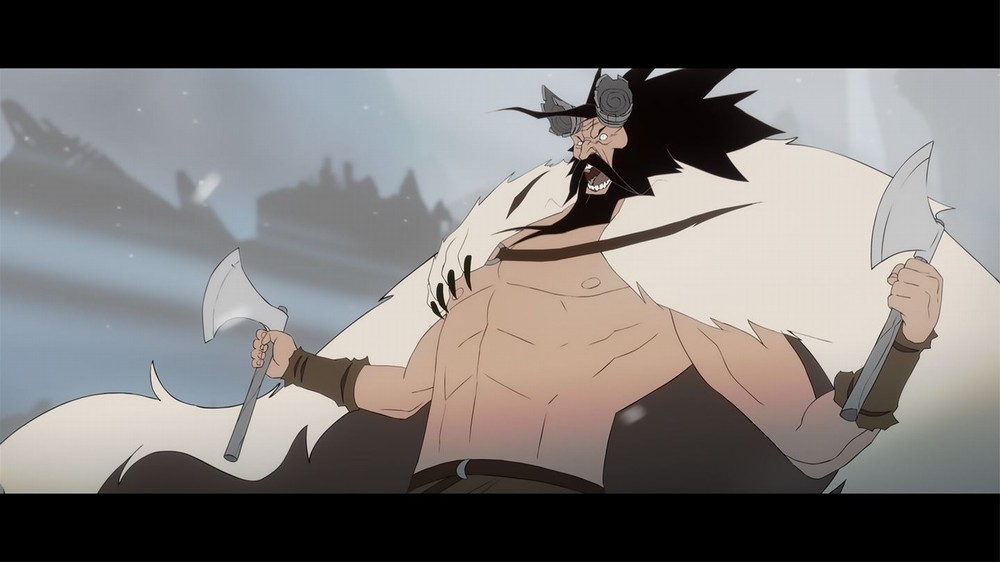 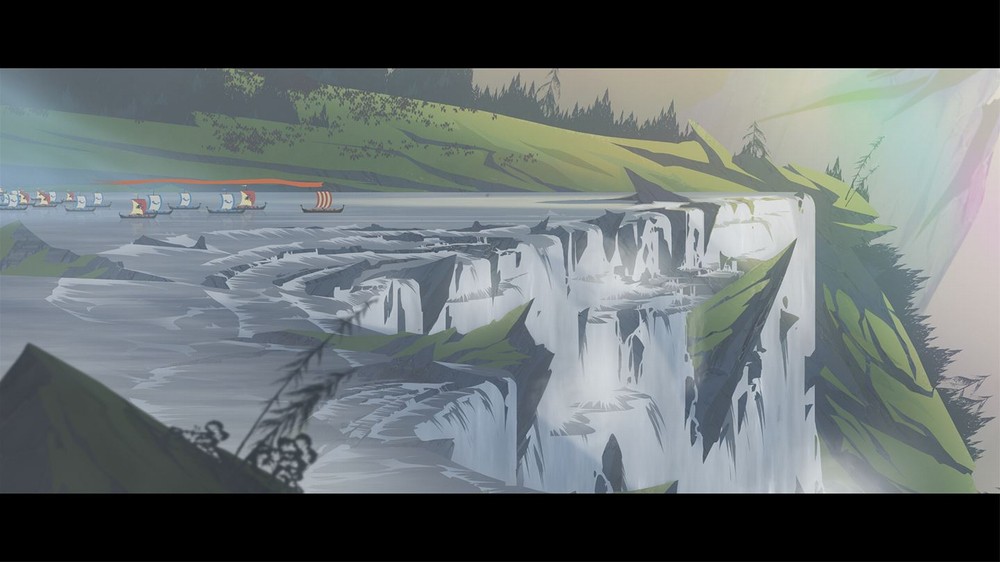 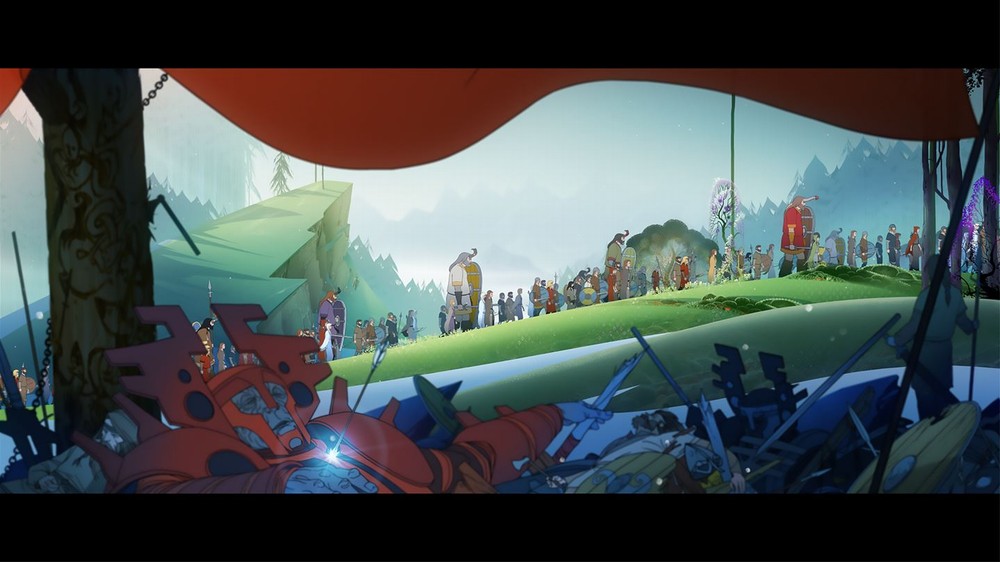 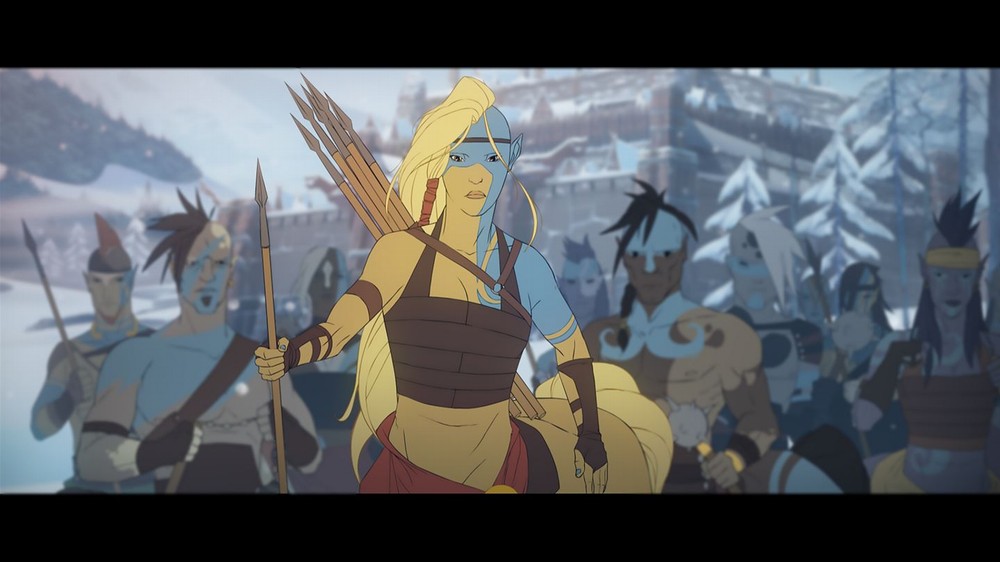