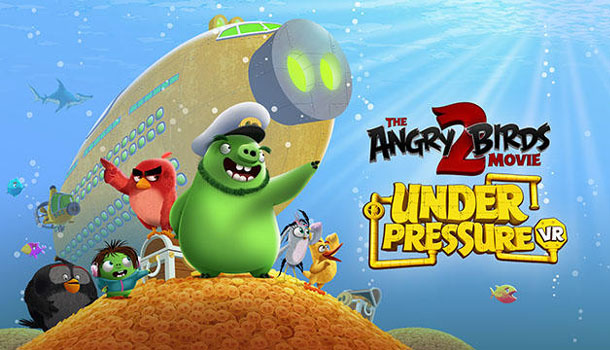 The game is little more than an advertisement for the movie…and a pretty good one at that.

The ever-popular Angry Birds are back with a new game to accompany the release of their new feature film with Angry Birds Movie 2 VR: Under Pressure. But if you are expecting this to be yet another take on the familiar slingshot tower destruction of the previous titles, you can think again, because Under Pressure comes with a whole new team-based gameplay mechanic that puts cooperation and construction at the forefront.

In this chapter of the Angry Birds saga, the birds and pigs find themselves needing to team up to thwart an attack by Eagle Island’s airborne army, who are set on taking over Bird Island and Pig Island.  The birds – Red, Chuck, and Silver – join Captain Leonard the pig aboard the Pig’s submarine for an undersea quest to Eagle Island in a valiant attempt to head off the attack.  Along the way, Leonard can’t but help himself to a little bit of treasure hunting, which constitutes the majority of the gameplay. 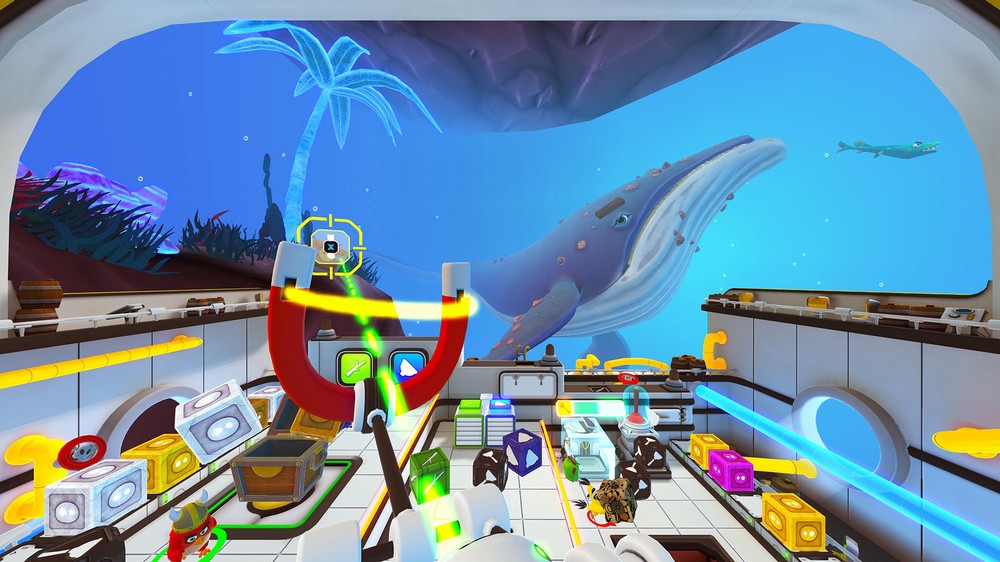 Like many other PSVR games, The Angry Birds Movie 2 VR: Under Pressure is, at its core, an on-rails shooter.  Gamers strap on the VR headset and take on the role of Captain Leonard sitting behind the helm of the submarine, which slowly follows a set course from point to point throughout the level.

Leonard’s main task is to aim (using the standard DualShock or the PS-Move controller) is to aim the ship’s toilet plunger-harpoon at the numerous treasure chests scattered about the level, and reeling them in with a button mashing frenzy, all quickly enough to repeat the process with the next treasure chest. Along the way, the ship will face a variety of obstacles and enemies that must be destroyed as well. 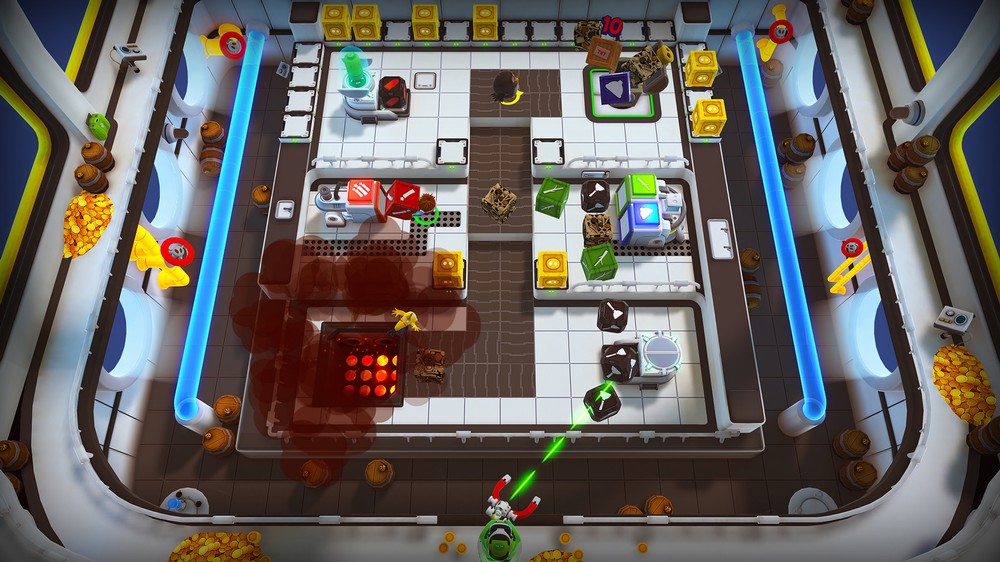 It would be, if there wasn’t the added requirement to simultaneously manage the bird crew as they collect and store all the found treasure, fabricate the sub’s various ammunition types, repair the subs controls and machinery, and disposing of the scrap and TNT. All of this happens at an extremely chaotic pace, and always in new and ever-more complex puzzle-like levels within the submarine.

Single gamers can attempt to take on the game alone, but the frenzied action of switching between Leonard and the crew and back as they deal with the tasks both outside and inside the sub quickly becomes overwhelming.  Thankfully, the developers have seen fit to incorporate party-style gameplay in The Angry Birds Movie 2 VR: Under Pressure – letting up to three friends (local only, and without VR headsets) take the role of the Angry Bird crew, joining in on the onscreen action.

And believe me, you will need help. 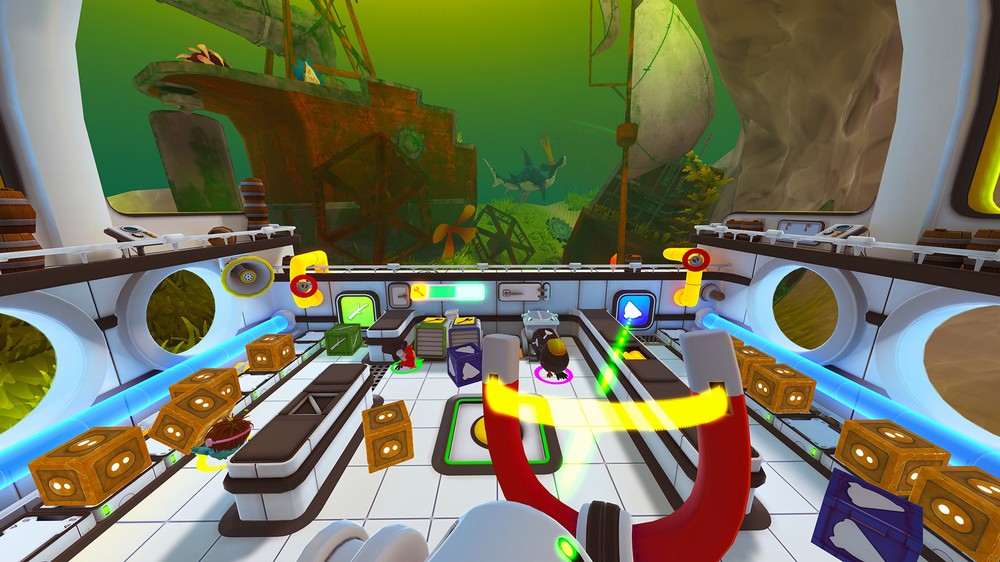 When playing co-op from the couch, the VR-wearing player experiences the action via a first-person view from Leonard’s cockpit, looking over the ship’s floor, and out the front window.  The co-op players see the action on the television via a top-down view – they can see all of the ship’s floor, but not necessarily the obstacles that Leonard must deal with outside the ship.  This means that Leonard must constantly be communicating his specific needs to the crewmembers, so they will fabricate the appropriate ammunition and perform the necessary duties before time runs out.

Much like previous Angry Birds games, each level is graded on a 3-star scale – and while getting three stars in the earlier levels is quite easy, in short order Under Pressure becomes significantly more difficult, and garnering a 3-star rating is nearly impossible.

Visually, the game is quite solid.  Of course, inside the PSVR headset, everything is still a tad grainy even after fiddling with all the knobs and dials.  But once the game starts all of that slides away, as the immersive feeling that PSVR gives games trumps any pixilation.  For the co-op players, everything looks crisp and clean, but the distance the game has to pan back for some of the more complex levels sometimes leaves things a bit too small for my taste. 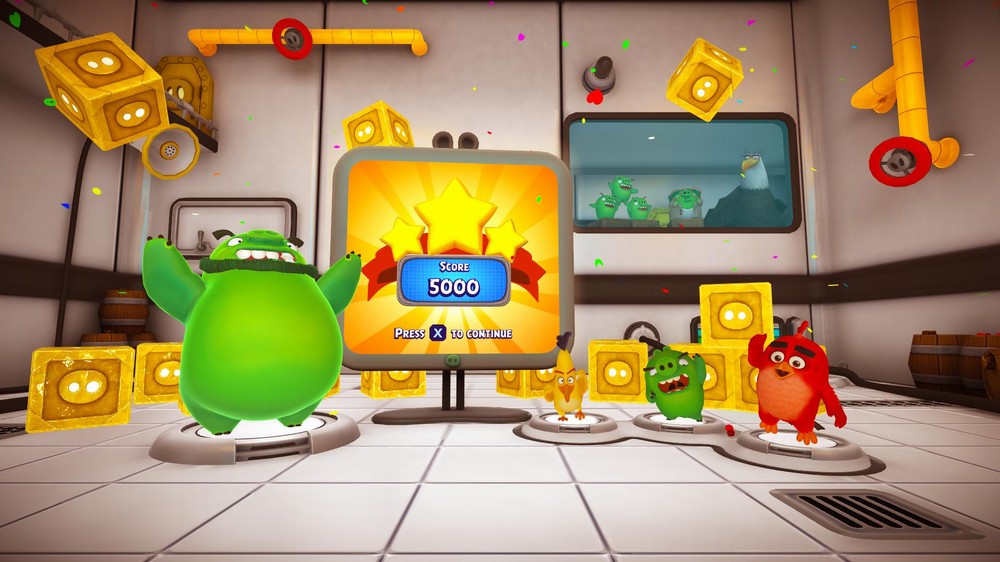 While the press for the game implies that the game features the voices of the film’s stars – Jason Sudeikis, Josh Gad, Rachel Bloom, and Bill Hader – it seems their voices are featured only in clips that were taken directly from the movie, like in the opening movie trailer that the game plays.  Other than that, any dialogue is simply via text boxes.  The orchestral background music is well-performed and whimsical but can be a bit repetitive after a few replays.

While I wasn’t able to experience the feeling of being flung from a slingshot in VR as I had originally been hoping, The Angry Birds Movie 2 VR: Under Pressure’s unique setting and focus on co-op gameplay ultimately won me over in the end.  That being said, the game’s current MSRP of $30 seems a bit steep in comparison to some of the other grade-A VR titles already available, especially considering it is little more than an advertisement for the movie…and a pretty good one at that – I probably wouldn’t have cared less to see the movie before playing this, but now I just might.

The Angry Birds Movie 2 VR: Under Pressure is available for $34.99 USD through retailers including Amazon, Best Buy, GameStop and Target.