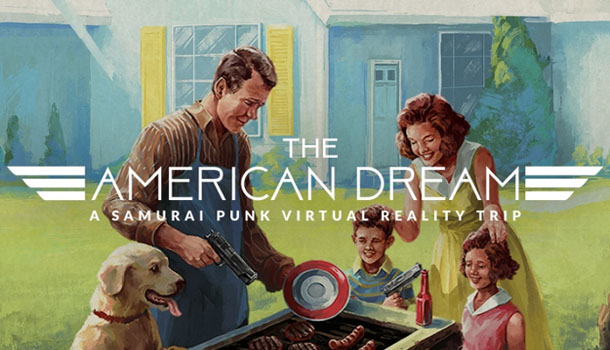 A delightfully funny and satirical look at how America's fascination with guns is viewed by the rest of the world.

The American Dream is one of those games that could only be created by someone outside the USA; in this case Australia. While the game claims to be purely satire, there is a lot of passively harsh criticism buried in the humorous skits and mini-games that make-up this 3-4 hour gun simulator. The game sets itself up as a theme park ride, or in this case a classy 1950’s World’s Fair event complete with that iconic voice style of a radio news guy or baseball commentator – think Hank Azaria in IFC’s Brockmire, only the voice is coming from a stuffed Golden Retriever, Buddy Washington.

The game begins with you seated in a cart, riding along a monorail where you are given an introduction to America’s love of guns before we begin a literal lifelong tour of how guns play an integral part of our everyday lives from birth till death, spanning more than 20 unique levels – aka shooting galleries.  To reinforce the “shooting gallery” theme, all the characters in the game are 50’s style artistic renderings painted on plywood cutouts that move, slide, and pop-up much like gun targets.  It’s awkwardly awesome, especially during events like the school dance seeing all these cutouts dancing around the gym, or watching your wife vibrate violently while delivering your first baby. 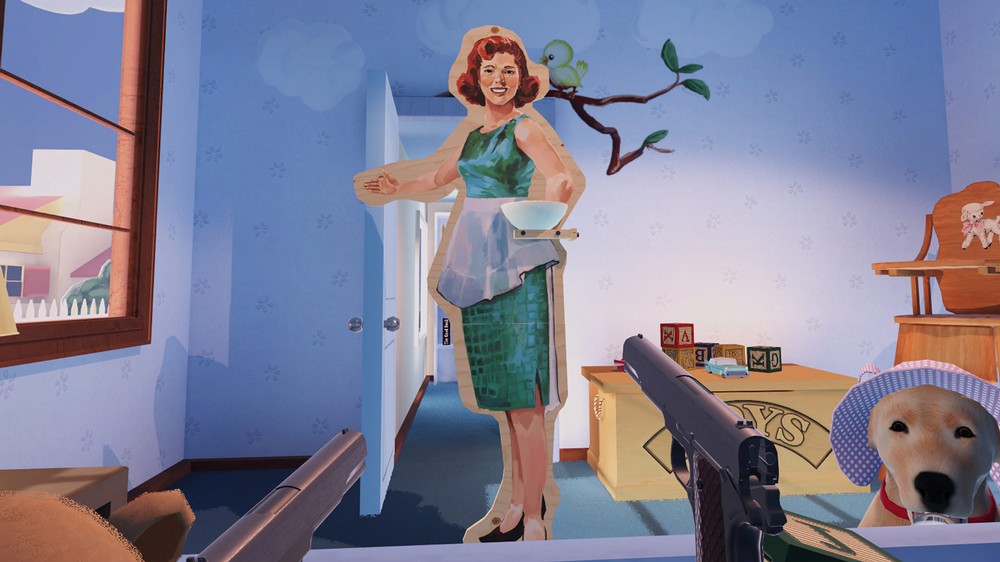 Depending on whether you are an infant in the crib or going out on that first date, going to the prom, getting engaged, losing your virginity, getting your first job, having your first baby, performing routine yard maintenance, or just relaxing with a beer in front of the TV, there are a variety of guns at your disposal to make all of these tasks exceedingly more violent (and fun) than they should be.

The game thrusts you into its signature brand of satire from the opening moments in your crib where, as an infant, you must summon mother by shooting your bedroom door. When she enters she’ll feed you your baby food from the end of a handgun, as you must physically lean forward to eat the slop from the barrel. Later, on your first date at the carnival you’ll get to feed your girlfriend cotton candy that you swirl around the barrel of a bolt-action rifle. When it’s time to have sex you’ll need to light candles with the muzzle flash from a shotgun before shooting the lingerie from your fiancé. Perhaps the funniest moments of the game take place at your “shotgun wedding” where you must shoot the sleeping pianist to resume the wedding march or silence the one man who objects to these proceedings. 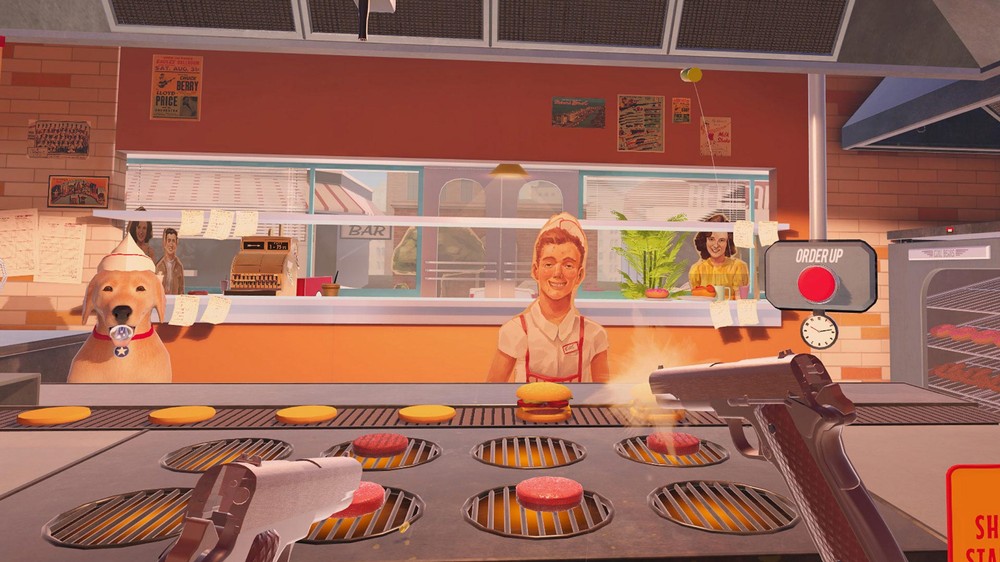 Along the way you’ll get to flip burgers as a teenager then work in the bagel factory as an adult shooting the holes into donuts or washing cars by shooting off the dirt. Back home, tending the crabgrass and trimming the hedges is made easier with a fully automatic machinegun. The American Dream has all the iconic stages of life from childhood to adulthood, each with an incredibly fun and often challenging mini-game that always involves shooting something. Scattered about the levels are hidden stars – some are really hidden – that you can shoot to collect for one of the hardest-earned achievements in the game. At the end of each level you will earn a certain amount of money based on your performance, and that money is used to buy better weapons for future levels, but since these weapons are required, the game has no problem with you going into debt, and with crazy purchases like ARA Memberships and expensive cigars for Buddy, it’s easy to go into the red.

While all of these activities sound like standard video game stuff, keep in mind you are performing all these actions with one or two guns. Playing with the Rift and Touch, the experience is seamless and enjoyable, while the Vive and its wand controllers make things more awkward and slightly less enjoyable. The game is a seated experience and only tracks a limited area in front of you, so there is no advantage to room-scale for the Vive.   With the exception of an arm-waving mini-game at prom, motion tracking is purely you pointing your guns into virtual space. 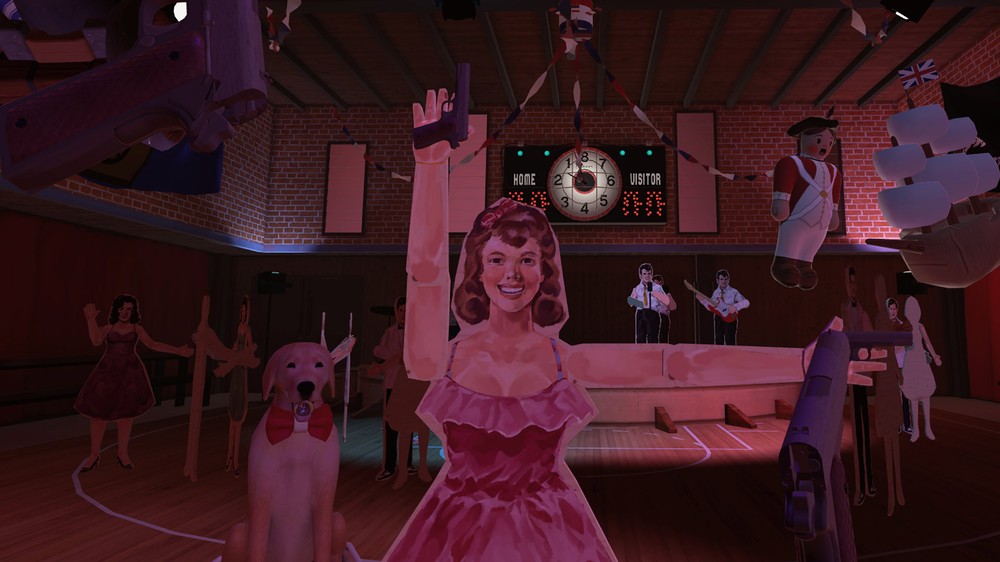 Wielding twin pistols is self-explanatory but later in the game you may get a rifle or machine gun for your dominant hand while your other hand gets a secondary “handgun” – a pistol with a literal hand attached to it.  I did enjoy the fact you can use your “hand” to steady rifles and realistically pump your shotgun, and in a few scenes you’ll have a can cozy to hold your beer, which you’ll need to shoot to open then lift to your mouth to drink. The hand on the handgun is useful for grabbing clips and magazines to reload your primary weapon. To reload large or small guns you’ll push the yellow button on either arm rest to launch a clip into the air. Time will slow and you can grab the clip with the hand and slam it home, or in the case of dual wielding, you will launch either a left or right clip then while in slow motion you must slice your gun through midair so that the clip inserts itself into the grip like some crazy John Woo movie.   It gets even more realistic with the bolt-action rifle where you need to eject the casing after each shot, and aiming down a fully functional scope is undoubtedly one of the cooler moments in the game.

I was having a total blast with this game until things started going off the rails about the time I was having my second child. My wife’s water broke and Buddy (the dog) is driving us to the hospital; the wife in the backseat going into labor while I am shooting at dozens of cop cars inexplicably trying to stop us from reaching the hospital. And it only gets weirder from there with a final boss level that was super-hard and super-stupid with a lot of political exposition that rose above satire to some sort of cult-like indoctrination. 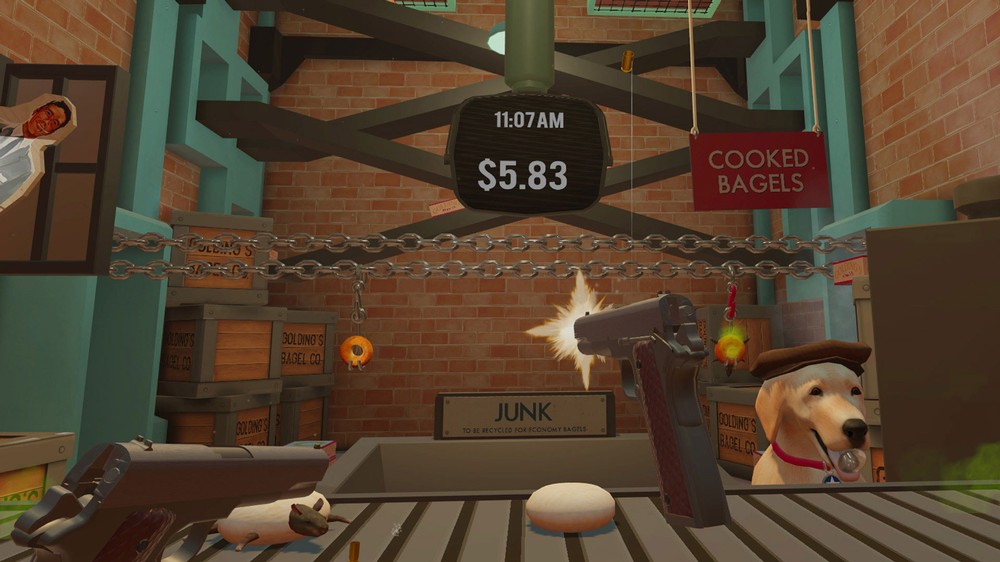 Despite the wicked turn into absurdity in the final moments, The American Dream was still a highly enjoyable, entertaining, and non-stop laugh-out-loud virtual reality experience that no one with a VR headset should miss regardless of your views on gun control or Second Amendment rights. With 318 shootings per day and six mass shootings per year in the U.S., I did have a few concerns for a game where you stick a pistol in a baby’s mouth to feed it, or shoot a guy at the school dance who moves in on your date, or shoot a guy in the hospital waiting room for smoking, but sometimes it takes an extremely satirical (and outside) view of a serious topic to generate awareness.   The American Dream will certainly push some buttons on both sides of the gun debate, but for those with a sense of humor and an open mind, this is one virtual ride worth taking. Where else can you lose your virginity with a flame-throwing shotgun? 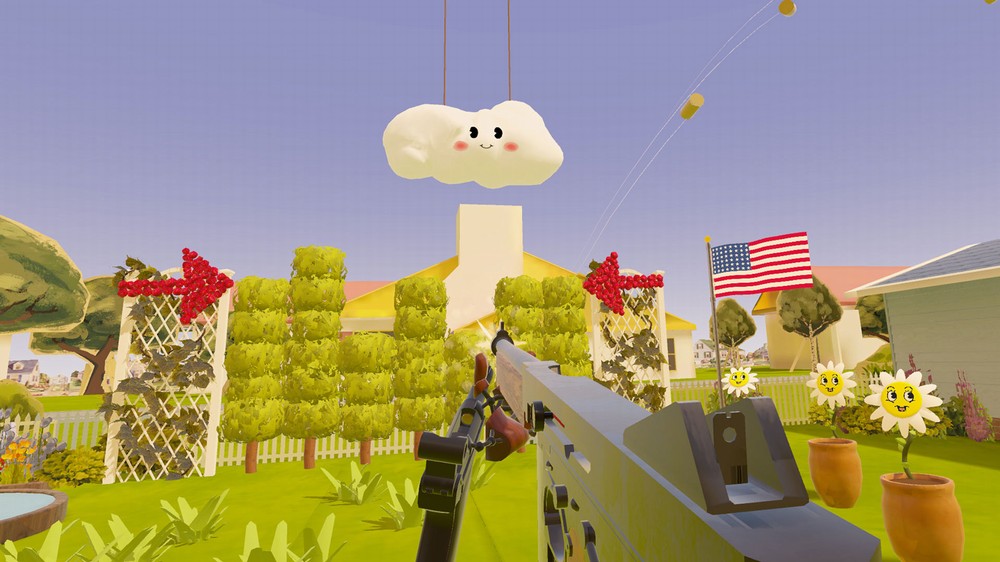