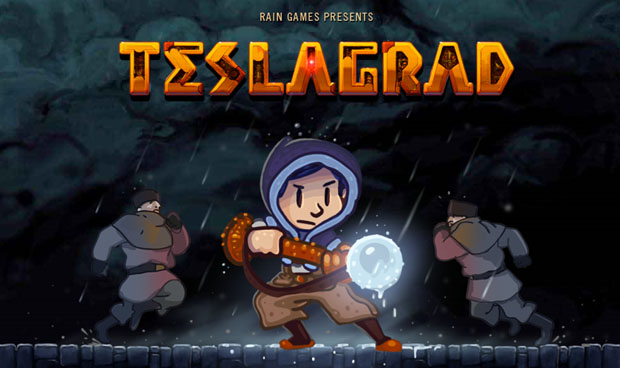 Old-school platformer with a modern flair.

There’s a certain charm to platformers that makes their gameplay something that can be enjoyed by all. It doesn’t matter whether the game is 30 years or 3 months old, they have a timeless quality to them. While the mechanics may change from one title to the next they all share the same core foundations that can be shared across any gaming platform out there. Two years ago I got the chance to check out a curious 2D platformer called Teslagrad on another handheld system. Once again I’m revisiting it on the Nintendo Switch, a device whose family of systems features some of the most iconic platformers to date.

For those that haven’t heard of it before, Teslagrad is a 2D puzzle platformer that utilized magnetic and electromagnetic powers to help you solve the mysterious Tesla Tower that on the verge of being destroyed by a ruthless king that wants ultimate power above all else. The tower holds many secrets including the story which is told completely by visuals. There isn’t a spoken word or scrap of text anywhere in the game save for the menu screen, so you can miss out on the backstory if you don’t explore the tower fully. 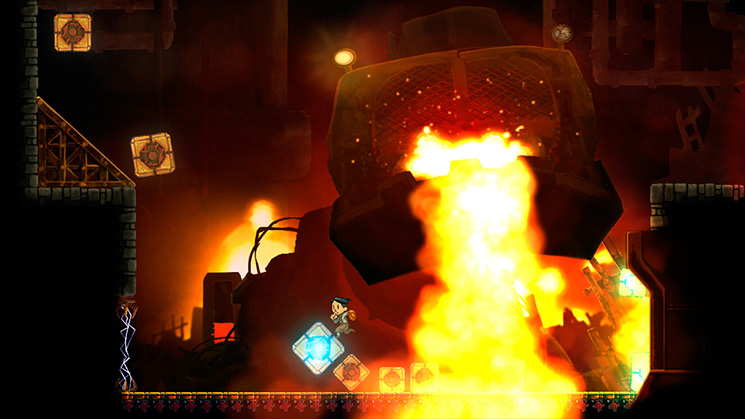 Should you come across the various music hall-style rooms in this non-linear tower you can experience the story leading up to Teslagrad’s present situation with a 2D puppet-style stage show. As you start the game and gain control of the main character you find yourself running from what turns out to be the King’s soldiers. You see you are the last of the Teslamancers and it seems the King is out to find you but in your escape you end up in the Tesla Tower which is the very building your ancestors built.

Teslagrad has a lot in common with some of the best platformers of old but it’s the mechanic of magnetism and electricity that really sets it apart from other indie platformers. Unlike the Metroidvanias, there isn’t really any direct combat here even in the boss fights as you use your brain to figure out the patterns and defeat them. While you gain the glove that allows you to charge or change the polarity of metal boxes and platforms early on in the game it’s not until I was frantically trying to time my jumps and polarity changing punches to defeat the first boss that I really came to admire Teslagrad’s uniqueness. 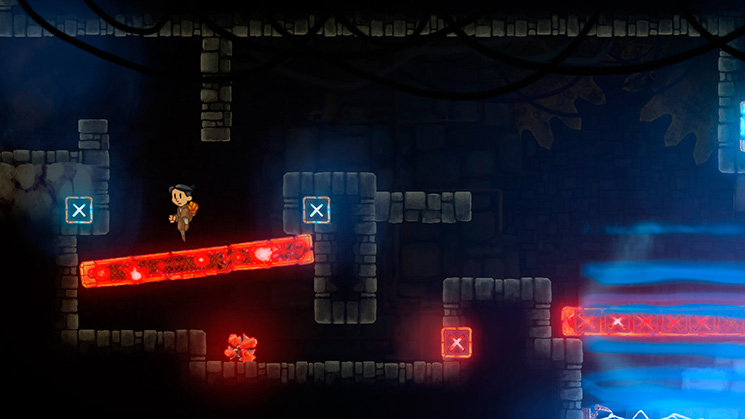 The glove is the only the first piece of gear in your arsenal as you’ll soon earn the Blink Boots which allow you to blink through or past solid objects or electrical currents. This opens up more of the tower as you explore and learn your ancestors past. With each new piece of equipment like the Magnetic Cloak and Teslastaff you’ll be able to create your own magnetic fields and charge hit objects from farther away as the puzzles grow more complex the farther in you go.

Actually completing each puzzle sometimes more than once is another matter entirely as perfection or near-near-near perfection is needed to make even some of the deceptively easy jumps. Despite the ingenious level designs and puzzles, timing and landing your jumps is perhaps the biggest frustration that I still faced in Teslagrad. I will say despite being the second “portable” version that I’ve had the pleasure to play the Switch version is easily the smoothest of them with a much wider control layout and bigger analog sticks. That doesn’t mean that it doesn’t take precision to make your way through the Metroidvania landscape. 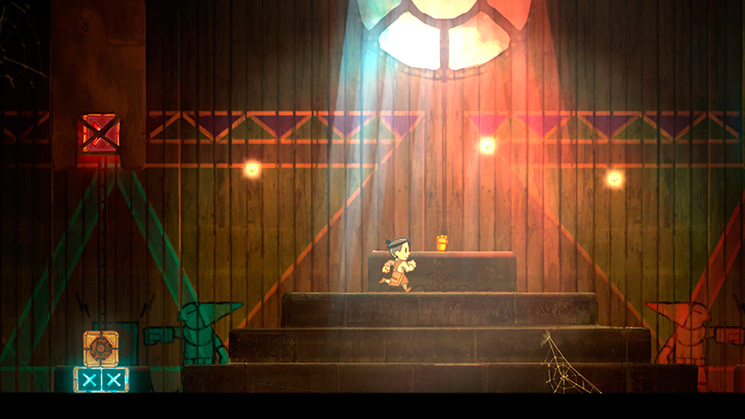 There is nothing worse than getting almost all the way through a room and then biting it on the last maneuver. I won’t lie; there were several instances where I actually had to sit the game down out of frustration for a time. I did ultimately make it through these segments though followed by a celebratory fist pump. You will have to go through some areas more than once so a bit of patience is required thanks to the less-than-reliable controls.

As a gamer that’s played the Metroidvanias of old, I dig the level designs and even more so its look. Teslagrad has been out for a couple of years now yet it still looks great on the Switch’s vibrant screen. The world in Teslagrad is an old European city that features medieval cathedral style rooms, dark caves and modern looking industrial room nuanced by steampunk elements of electricity, gears and lots and lots of magnetically charged boxes. The whole game has a dark oppressive feel to it that is only accentuated by the atmospheric score. The main menu track has this repressed old world vibe to it that really sets the mood of the game and the melody that plays within the tower adds to the mystery of the world. 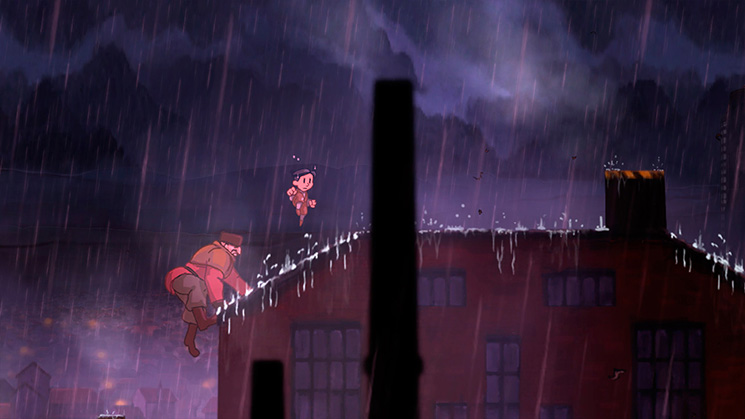 Teslagrad is still the enjoyable platformer that I had fun with before and with the Switch’s console/handheld versatility it really can be enjoyed anywhere. While I enjoyed it, Teslagrad still isn’t without its frustrating moments mostly due to the imprecise controls which are crucial in titles like this one. On the plus side, Teslagrad is a perfect addition to the Switch market, as the controls are rather easy to learn but tough to master, as you make your way through a well-designed world. If you love old school platformers with a modern flair check out Teslagrad for the Nintendo Switch today. 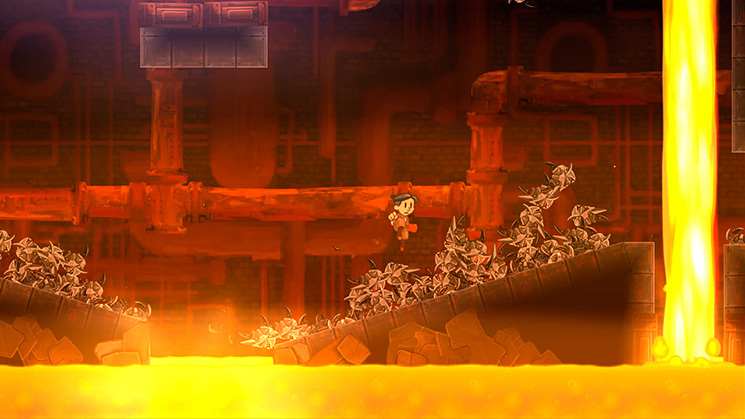 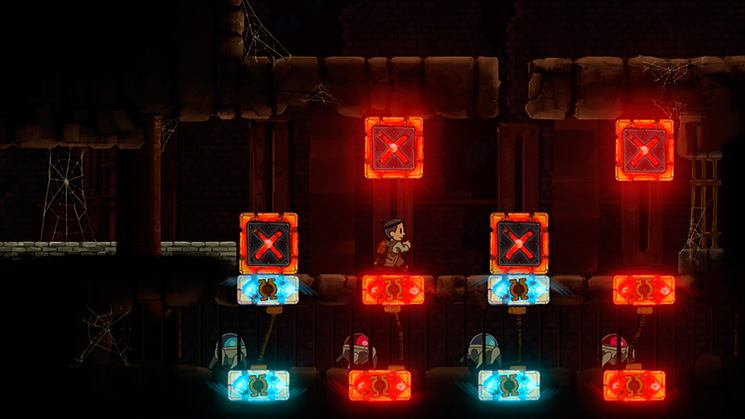