Terraria is the perfect introduction to the crafting genre made even better by the Vita's hybrid controls.

Everywhere you look these days you’ll find another game that involves crafting as a means of survival regardless of its graphical capacity or gameplay style. On that note, I’m surprised it’s taken me this long to have tried one of them until now with the release of Terraria for the PlayStation Vita. Originally released for PC, Terraria has already sold a couple of million copies to date and has since been ported to consoles as well as mobile platforms. Terraria on the Vita however gains the combined control schemes of both the mobile with that of the console thanks to the system’s diverse input options. Personally, I’ve never been a huge fan of crafting systems in games, but Terraria’s way of doing it may have just lessened my disdain for them as I sank more hours than I care to admit into this adventure.

The thing about Terraria is that for a first-time player the basics of attacking enemies and collecting resources are pretty straightforward. Using the touchscreen you switch between the basic set of equipment(an axe, pickaxe, and sword) to dispatch a variety of enemies or gather resources by chopping down trees for wood and digging into the earth for stone, clay and ores.  It wasn’t until I actually started putting those resources to use that the experience got tricky. Luckily I invested the time into Terraria’s included tutorial that lays down the basic rules and how to navigate the different menus that make up the core of the crafting system to get a handle on things pretty quickly. 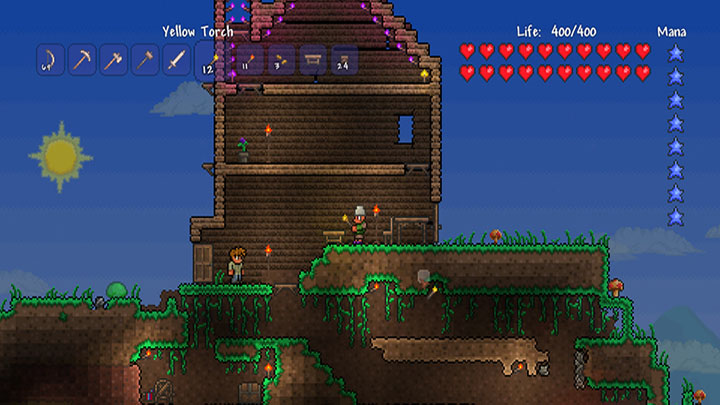 Terraria has a day/night cycle and things start to get real ugly real fast as tougher enemies come out to play during the night. That’s not to say that fighting slimes is a piece of cake, as you can get defeated by them if you not careful depending on the terrain. Defeating them and the other enemy types can reward you with resources like goo for torches as well as coin to spend at potential NPC vendors later on. But all the gathering in the world won’t save you if you don’t make yourself a shelter come nightfall. Like many crafting games out there building yourself a home should be any player’s first priority. There are basic guidelines on what counts as a house but players can expand on it to their heart’s and imagination’s content over time with enough resources and equipment to pull it off. Every home should have enough room to house a work bench and furnace which are the two most important items in which everything else can be crafter. For instance, you need a furnace to make iron ore into iron bars which can then be used to make better armor and weapons at a work bench. The cool and time consuming thing about Terraria is that everything you can collect can be used towards some greater item.

As I mentioned before the Vita is a versatile handheld and the developers made use of most of its features, save its motion functionality. The left analog stick allows for precise character movement while you use the right stick to aim your tools in the direction that you want to dig or chop. Items such as your weapons, resource tools and materials can be set to the D-pad for quick switching. My biggest issue with Terraria is with the aiming system. Aiming with the right analog stick is super-sensitive either due to the Vita’s short sticks or just the coding. I found using the Smart Cursor to be a lot more effective and precise which suits my play style. The one kink to the system, which is a rather big one, is that the developers choose to use the entire rear touchpad as a secondary aiming control. Normally I would be ecstatic if a game utilizes the back pad but it only takes the slightest touch on the back to throw the cursor off to one side of the screen. To make matters worse you can’t turn the rear touchpad feature off which is pretty unforgivable honestly as far as control schemes go. 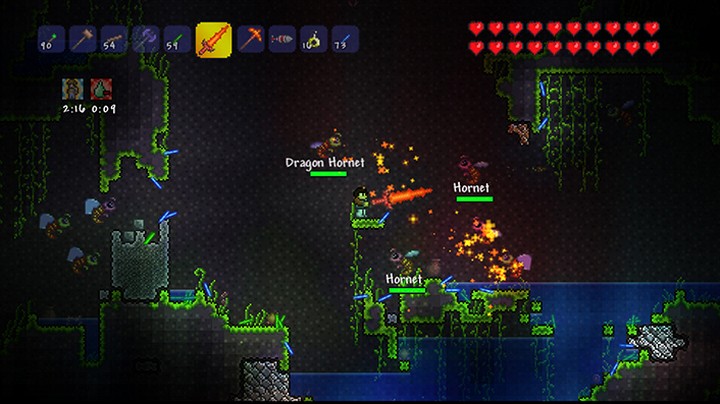 The one thing that I do like about Terraria on the grand scheme of things are the visuals. Terraria features the retro aesthetics of the 16bit SNES era which fits the block by block building and deconstruction nature of this adventure. Even on the Vita the colors pop off the screen thanks to the vibrant OLED and text is surprisingly easy to read given the retro package.  As I mentioned before, Terraria also features a day and night cycle which really shows off the lighting effects if you are using a torch outside or in my case deep underground mining for resources as zombies and flying eyeballs surrounded my house. The music, which is comprised mainly of chiptunes also fares pretty well considering it also plays to the retro feel of the game.

As a player that’s never really dug the whole crafting game scene, it’s apparent to me now that there is more to games like Terraria than just that. Gamers of all types will be sure to find something that they enjoy doing in their own worlds or those that they help build with their friends (up to 8) via multiplayer. If you aren’t really into the co-op scene then there’s the ability to battle with your friends as well, and if you already own or plan to get the PS3 version then you can utilize the cross-play features for more versatility and fun.

Terraria marks my first outing into the world of crafting/survival games and I have to say the Vita is a pretty good fit for the title. While the usage of some hardware features could have been left out and maybe the ability to adjust manual aiming sensitivity could have been added, I had a lot of fun creating a fortress I could be proud of and fighting tougher and stronger enemies as I progressed through my endeavors. Terraria may not have been created on the Vita but I definitely feel that it has found a good home on it especially for fans of the game that are looking for an expanded version of the game on the go. 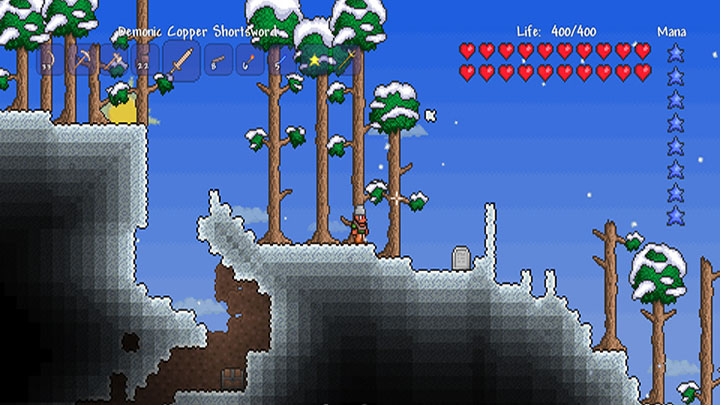 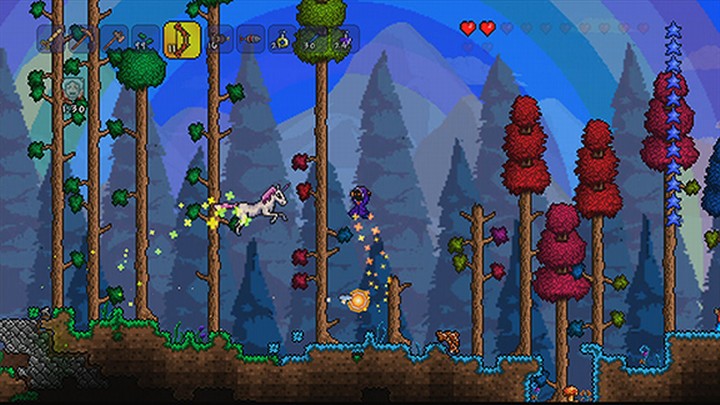 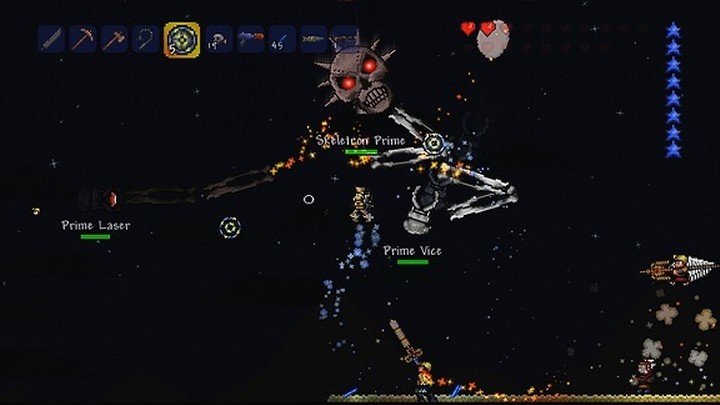 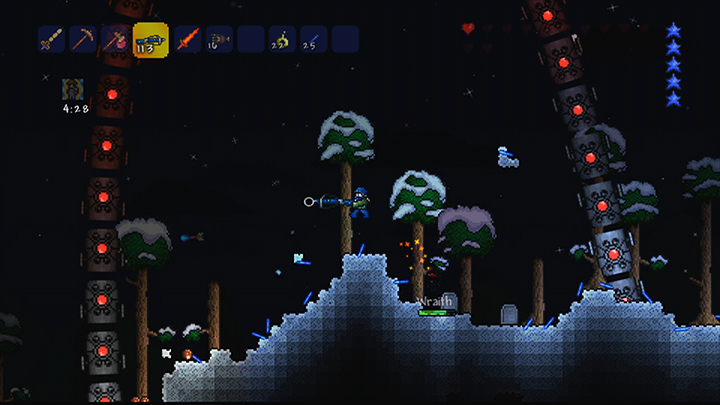 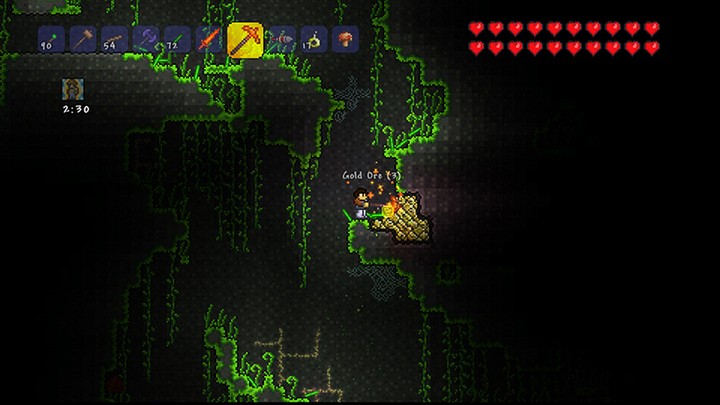 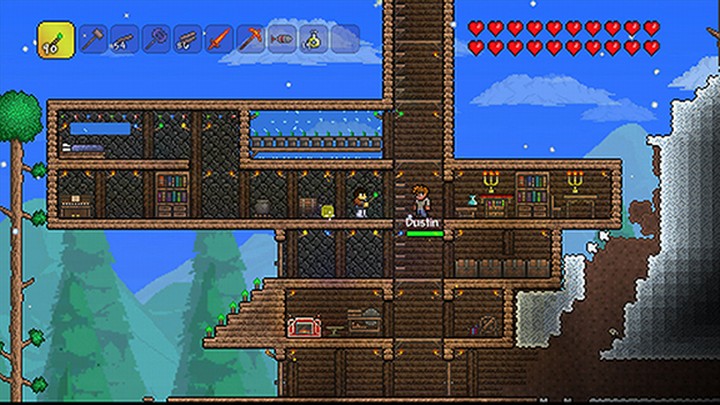