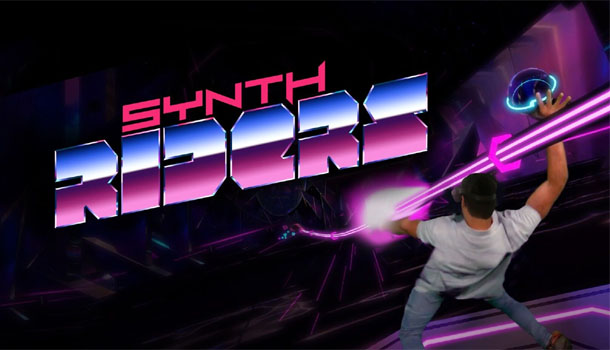 I love music games. At one time my garage was home to no less than 15 plastic guitars, 5 drum sets, 6 microphones, a mini-keyboard and even the official Rock Band smoke machine and lightshow device. Sadly, those days are gone, replaced now with a new music-game genre born from VR and the growing EDM scene. Games like Beat Saber, Audica, and even cult overseas games like Hatsune Miku have all be fueling the interactive VR music space but nothing has gotten it so completely right as Synth Riders.

I’ll begin with the standard disclaimer that a music game is only as good as the music it contains, and musical taste is purely subjective. Whether you love, hate or merely tolerate any of the 31 included tracks will be entirely based on your affinity for EDM and the artists who contributed content, but rest assured the game contains a fully functional and free editor, so you can drop in your own favorite music and enjoy your own custom experience. This native support for private music libraries is a great feature, guaranteeing that, unlike other music games with custom library support, your songs will continue to work even after future mods and game patches. 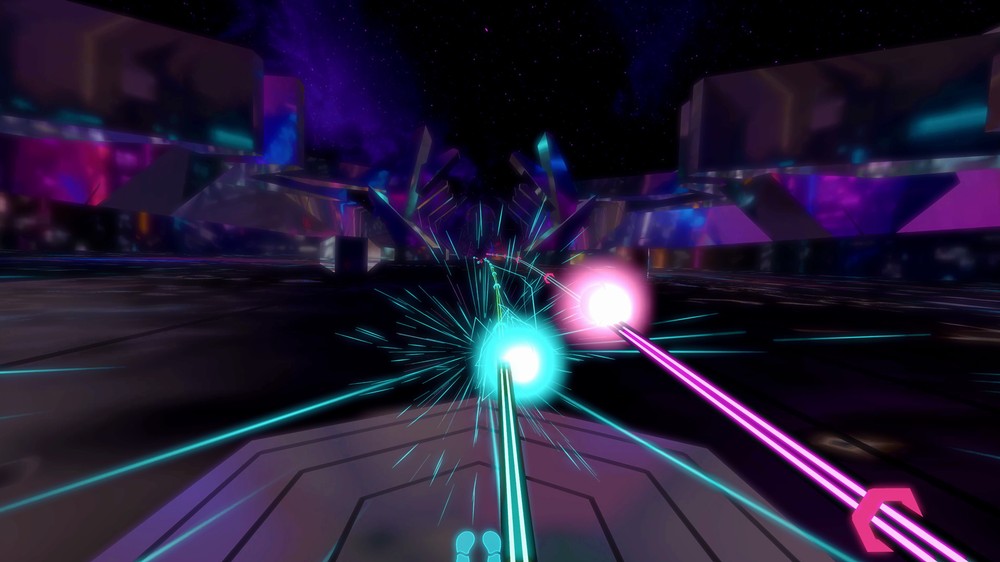 As someone who only enjoys about six of the tracks from the core Beat Saber library and very little of the DLC, I was pleased to find I really found my groove with nearly all the songs in Synth Riders’ library. Only a few were overly harsh/annoying yet still tolerable, and I especially enjoyed the larger selection of songs with lyrics. There was a nice spread of genre and composition combined with varied BPM that defined the difficulty of a track even before you factored in other modifiers.

Make no mistake, Synth Riders is borrowing heavily on the look, design, and to some degree even the gameplay of Beat Saber starting with the Tron-like neon environments that combine a classic retro 80’s vibe with the glow stick culture of a modern day rave. There are numerous level designs included in the core game that you can either choose or have randomly selected with more themes coming soon; not that you’ll have much time to appreciate the artistry as it whips by. You’ll be focusing on the gameplay.

Again, borrowing on Beat Saber’s design, Synth Riders bases its core game mechanic on blue/cyan and red/pink/purple elements, but instead of slashing as these targets with matching colored lightsabers you’ll only need to touch the targets with the matching orbs on your corresponding hands. I joking commented that I felt like a cheerleader shaking my pompoms, which is not entirely incorrect. Based on the song selection and any difficulty modifiers the game will present hundreds of blue/purple orbs in various sequential patterns about the 3D space, all streaming at you to match the tempo of the song with orbs usually falling on the beat. All you need to do is make sure your matching colored hand is in the proper place to “catch” the incoming orbs. 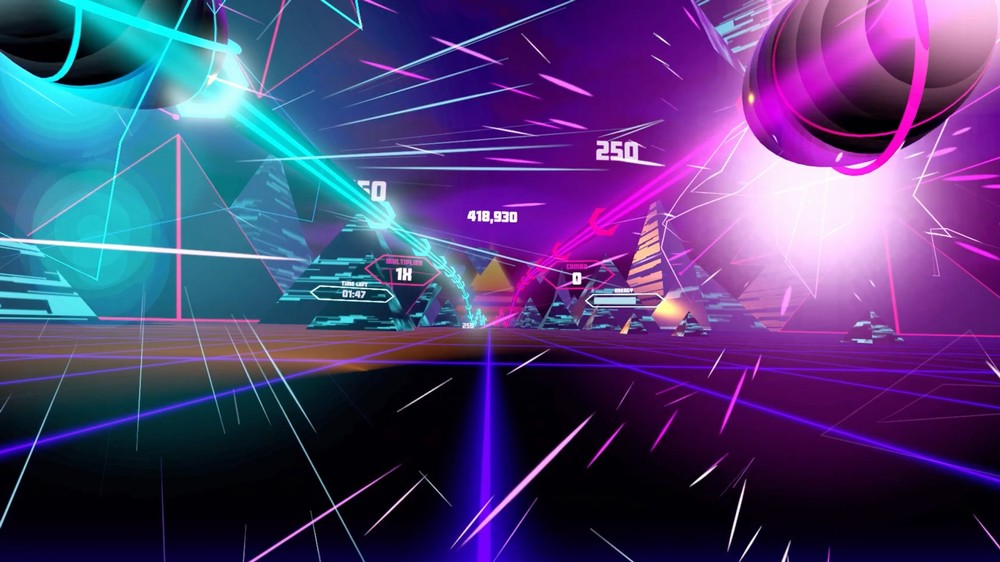 Sure, it sounds easy, and yes it’s not nearly as physically exhausting as swiping a blade in Beat Saber, but Synth Riders is still super-challenging both mentally and physically. In addition to catching the floating orbs you’ll also have sustain notes that play out like a monorail that can twist and rise and fall like a rollercoaster, all the while asking you to match that path with your hand. You’ll also have green and orange orbs. Green orbs can be caught with either hand, but once you’ve committed a hand you’ll need to keep using it for the rest of the sequence. Orange orbs can be even more challenging, requiring you to put your hands together to collect them. And to top everything off, based on song selection, game mode, or difficulty choice you can also have physical barriers thrown in your path that you will have to lean, sidestep, or dodge. Again, nothing we haven’t seen in Beat Saber but Synth Riders seems to pull it off with more polish and flair.

The core game is incredibly fun and unexpectedly challenging and addicting right from the start, but Kluge Interactive has seen fit to give you ample ways to explore the content and experience the game. There are several difficulty settings starting with Easy and going up all the way to Master. Normal seemed to be a fairly comfortable place to start, and the song library seems to have its own natural progression of difficulty as you advance the tracks toward the right. If you try jumping ahead to the tracks in the 20’s without warming up on the earlier songs you might be surprised how quickly you fail. You can switch the difficulty on a song-by-song basis and clearly see the changes each setting brings to the number of notes, physical barriers, BPM, etc. and there are unique leaderboards for each. It was nice to see my own level of personal improvement starting off in the 80’s then moving to the 50’s and averaging in the top-30 after about two hours of play. It was no surprise that the songs I enjoyed the most musically were also the ones I scored the highest. Easy mode is a great place for younger or more casual gamers to get adapted to the game mechanics while the Master mode will have a Dallas Cowboy Cheerleader rethinking her career choice. I tried Master a few times on my favorite song and only got a few seconds into the track before failing. I’m sure it can be done…but not by me. 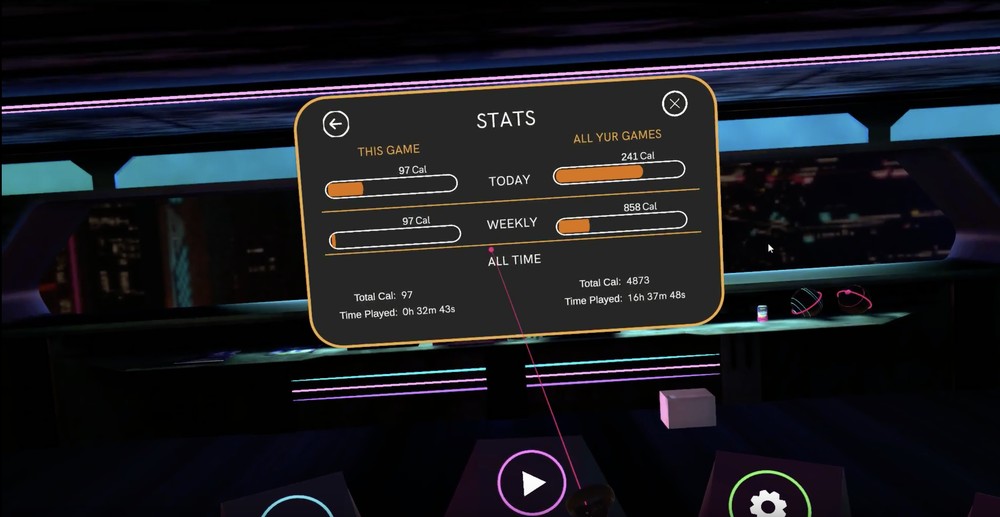 There are also three game modes in Synth Riders. Normal mode is where you’ll probably spend most of your time, and that is pretty much the game as explained above, but there is also a Force mode that wants you to “punch” the orbs rather than just let them pass through your hand. This is much more physically exertive and exhausting, perhaps even more so than Beat Saber. You’re basically turning the game into a boxing training sim set to music; time to load Eye of the Tiger into the editor. The stronger your punch the higher your scores, and to my surprise this turns the game into actual exercise. I played Force mode for 20-30 minutes and my Apple Watch logged twice as much exercise for that day as any other day playing regular video games.   It’s not surprising that this game has integrated support for YUR Fitness Calorie Tracker. The third mode is Challenge mode where you have full control over all the variables of the game to create your own challenges as far as note speed and physical barriers. There’s also a Party Mode. I didn’t try it and honestly I don’t think I ever would. The VR headset gets pretty damp and gross after only a few songs. This really isn’t the kind of game you want to be passing the headset around.

I reviewed Synth Riders off of a Steam code provided by the publisher so I was able to play with both my Rift S and my Vive. The Rift S offered some clearly superior visuals and more enjoyable gameplay thanks to the lighter Touch controls that make the collection spheres part of your hand rather than an extension of it. I also enjoyed the Touch’s force feedback for each note collected as well as the subtle vibrations of “riding the rail” that created more immersion with the music. The Vive wands were heavier, causing more hand and arm fatigue over the same amount of time, and you’ll want to tighten those wrist straps. As always, the Rift S continues to offer the superior experience over the Vive but never enough to score it differently. 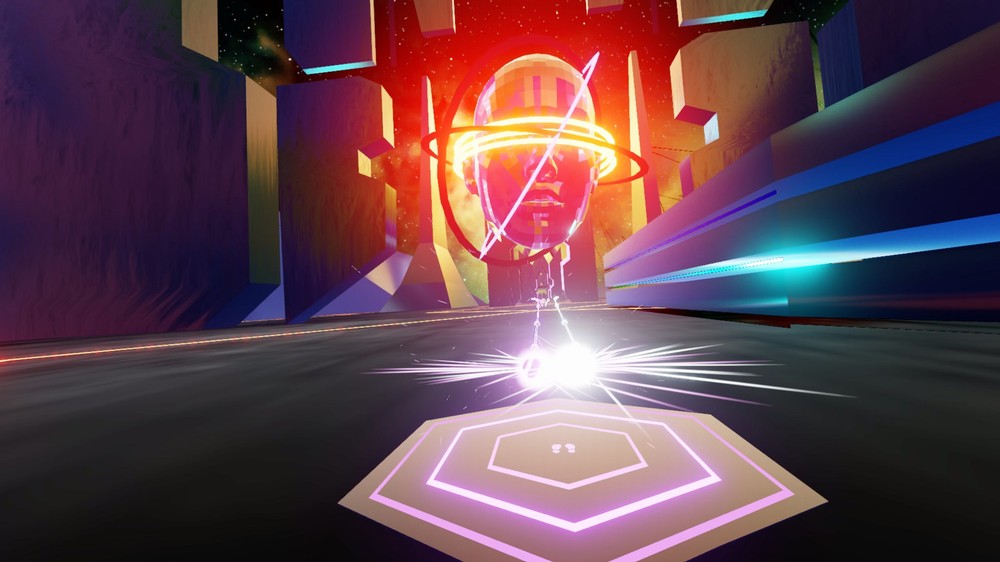 It’s worth mentioning that calibration is very important to enjoying Synth Riders. The auto-height toggle didn’t seem right for me and the default height was something like 4.7 feet. I’m 6’2” and ended up manually adjusting the height to 6’ before the game got comfortable. If not properly adjusted you’ll spend much of the game hunched over to grab notes and rails below your waist. It might take some trial and error but try to get the majority of the notes coming in about shoulder –height for optimal fun and comfort.

The best thing about Synth Riders is how the game was clearly designed for you to experience the flow of the music with pure and instinctually body movement whether you are spiraling your hands around to match the incoming pattern of orbs or riding the waves of the curvy sustain bars. If you’re not careful you might just catch yourself dancing to this game – it’s hard to maintain this level of upper body movement without your feet getting involved. I haven’t had the opportunity to play with the Beatmap Editor or experience any user-generated content, but just taking into account what is provided “out of the box” for $20, Synth Riders is by far one of the best VR music games out there with the most immersive gameplay and subjectively speaking, one of the best music track libraries of its kind. If you own a VR headset and enjoy the whole EDM scene then you definitely want to be playing Synth Riders right now. 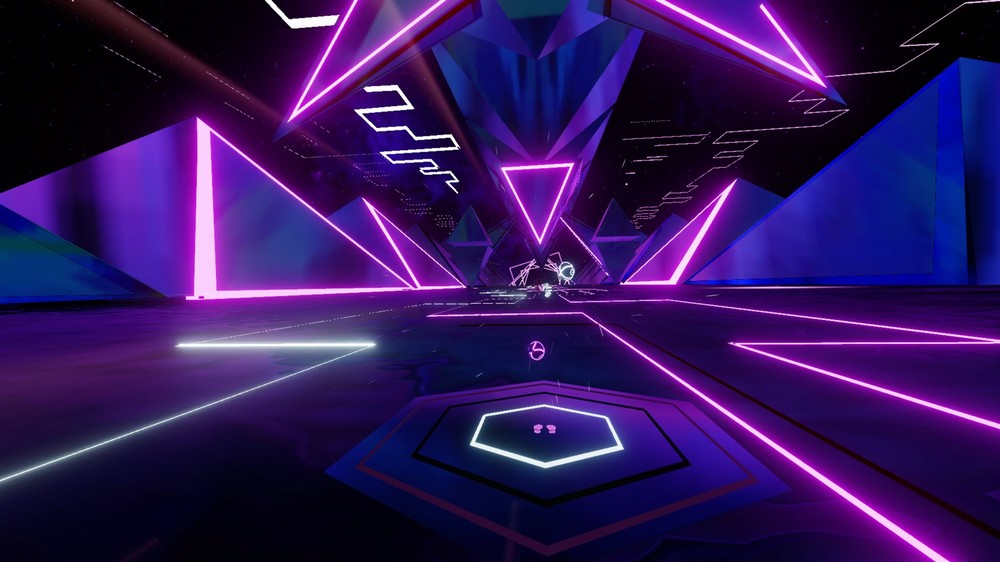 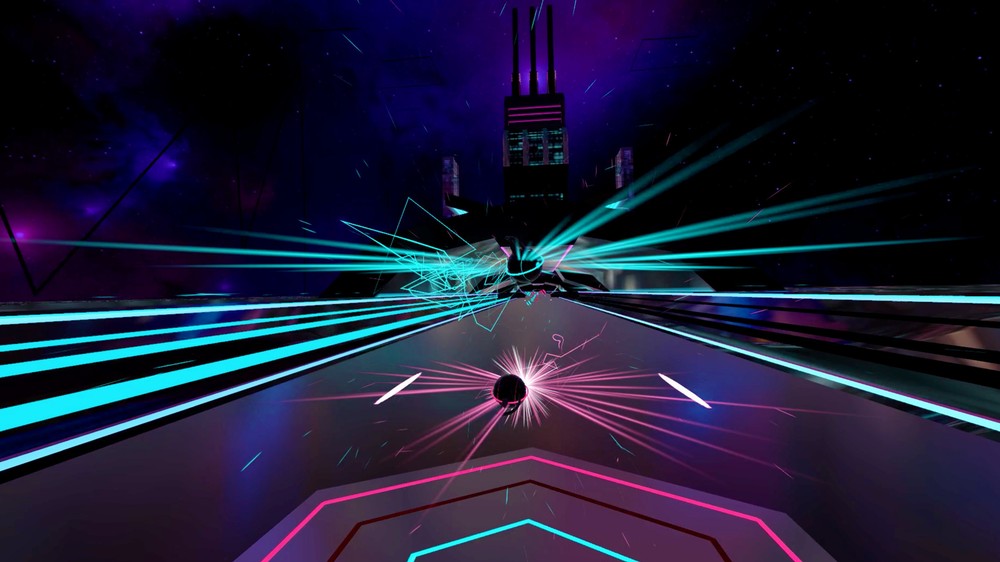 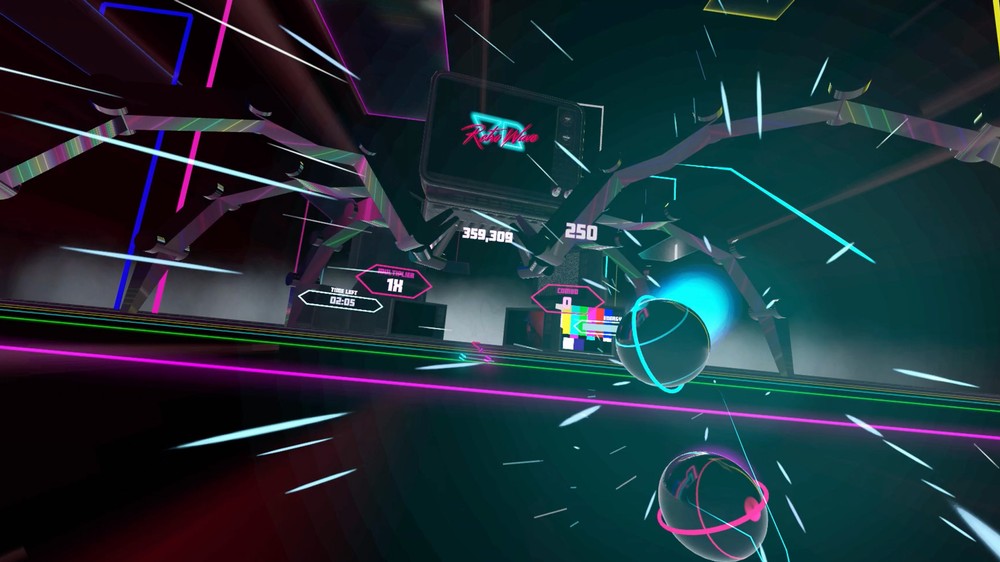 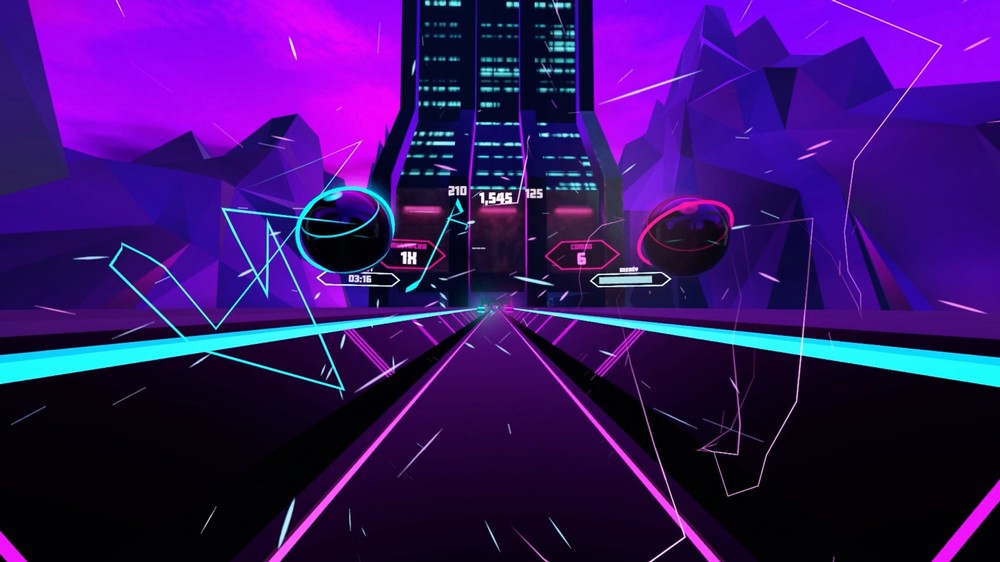