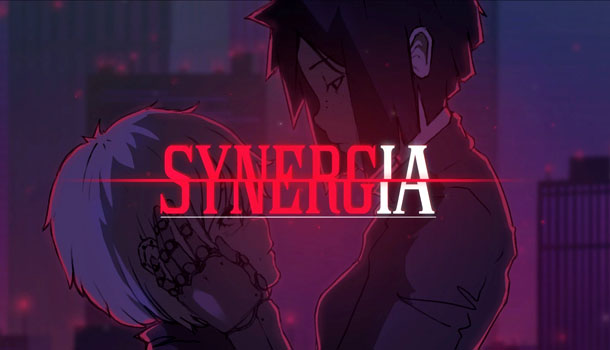 - Confusing UI that makes it hard to tell exactly which character is speaking in any given scene.

A rough-around-the-edges cyberpunk story that is unique and worth the experience.

We are experiencing a kind of cyberpunk renaissance when it comes to games and other digital media. There are more cyberpunk themed stories coming to us now than ever before, and it is pretty great.

Cyberpunk, as a genre, is not new. Its origins come from ‘80’s era sci-fi books and movies, but that style and feel has stayed with us as a part of our culture. Science Fiction as a whole has been changed in many ways by this highly stylized sub-genre. It has a strong history now. And the best new cyberpunk is that which is keenly aware of what has come before it. Because true cyberpunk is more than just neon lights and chrome. It is a genre that explores identity. What it means to be human. What it means to feel. To live. To be alive. 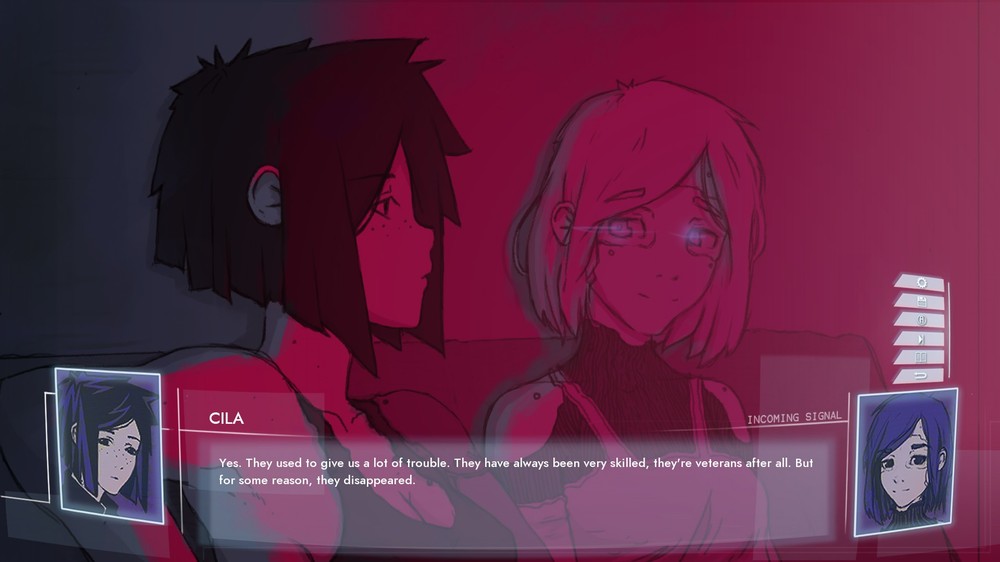 Synergia, to me, is one of those cyberpunk stories that really gets where it comes from and is staying true to the themes of the genre as a whole. From the very first few moments of the game, there are already hints at some deep, difficult themes coming up. Like a conversation between two characters about love for a robot and whether or not that can be real. Even the chapter headers feature quotes from the likes of Keats, Turing, Dick, etc. Many of the greatest minds in technology, cyberpunk, and self-aware thought. In a story about self-actualization and artificial intelligence, the writers of this story were definitely channeling the right people.

Just as important to cyberpunk as the themes are the styles, the look and feel of the world. The idea of high-tech and low-life. The gritty realization that the world is everything we hoped it would be, but only for a select few. The rest are left to scrounge in the digital dirt like they always have, fighting for a better life among the cast-aside tech of the have’s. 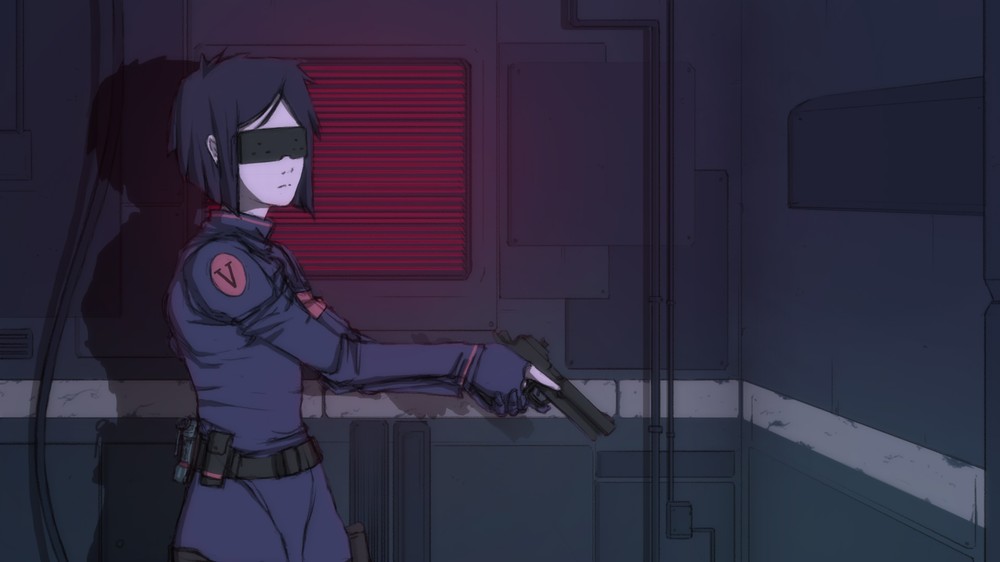 I feel like Synergia, as a visual novel, really captured all of the essential components of a true cyberpunk story. It feels like a cyberpunk story from the very first moments all the way through to the end. At no point did I feel like it was “just a story” that they put a cyberpunk coat of paint on. It was essentially cyberpunk, and I really liked it for that.

And, as much as this game is a “visual novel” there are points along the way where you, as the player, are asked to make choices. And these choices do affect the course of the story. There are, supposedly, several different potential endings available that are reached through your various decisions throughout the game. So, it is an interactive experience, even if that interaction is somewhat minimal. 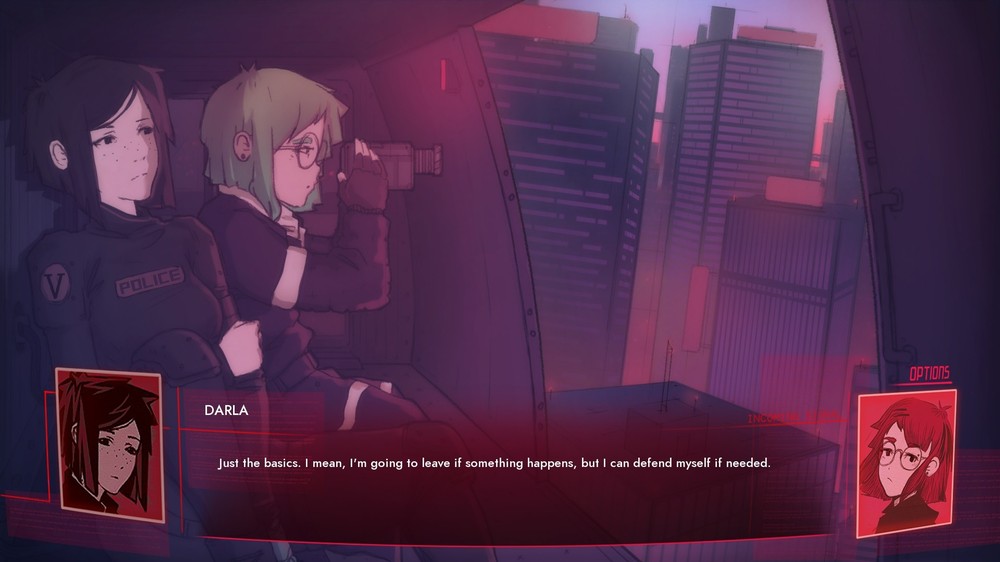 I don’t have many complaints about Synergia as a whole, considering that it is not being billed as a “game” but as a “visual novel”. The writing is good enough, considering that it seems to have been written by someone whose primary language is Spanish and not English. One of the things that was difficult for me to figure out was the way that it shows conversation between characters is by having their images on either side of the bottom of the screen with the dialog box in the middle. As the conversation switches between characters, the only indication that it is someone else speaking is the label at the top will change to the name of the person speaking and the box that has that character’s picture in it will glow slightly while the other will darken. This is not very obvious and, especially at the beginning when you don’t know everyone’s names, it can be rather confusing.

Some of the art is really great and really sets the tone for a solid cyberpunk story, while others lack a bit in quality and feel rough. I think that it wouldn’t have been as noticeable if these pieces of art weren’t on screen for as long as they are during certain scenes. 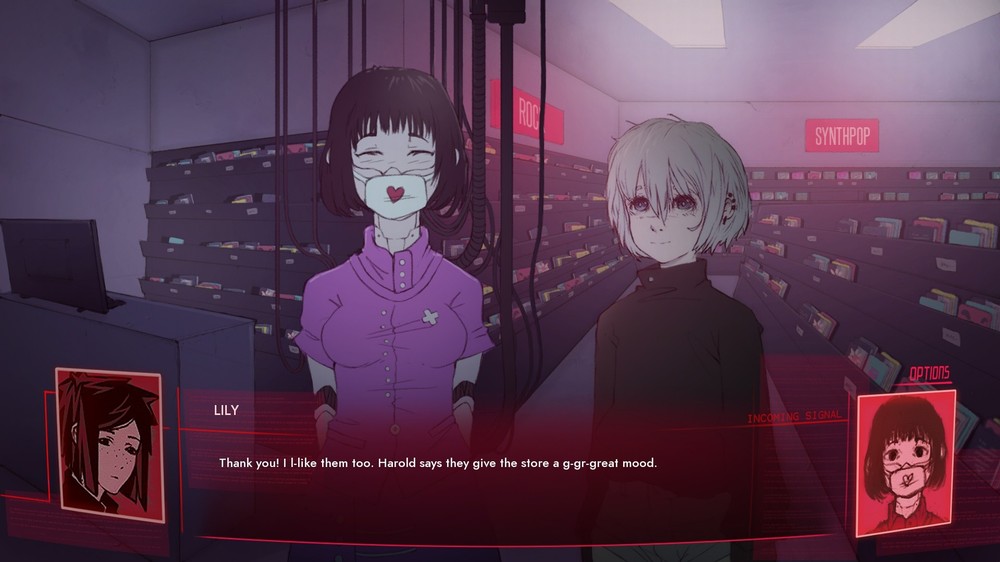 Finally, the last piece of the puzzle was the music. The soundtrack for the visual novel of Synergia is really well done and I think it is the ribbon that ties the entire package together. I could honestly listen to the soundtrack for this for hours and not get tired of it. It is simple and soothing and has just the right amount of synth to it to really make it pop as a cyberpunk-styled set of music to go along with the story. It also shifts and sets the mood really well from scene to scene.

Overall, the visual novel of Synergia is a cyberpunk story, through and through, and it is an interesting one at that. However, there are points at which it feels a bit amateurish in the way the story is told and the characterizations of some of the interactions between characters. The frustrating UI is something that I was able to get over pretty quickly, but it was enough of an issue that it stood out to me. I think anyone who is a fan of the genre would enjoy the experience of the story of Synergia. It is unique enough and not a complete cliché, which is always a welcome experience when considering how many ideas have been recycled over and over again in the genre.