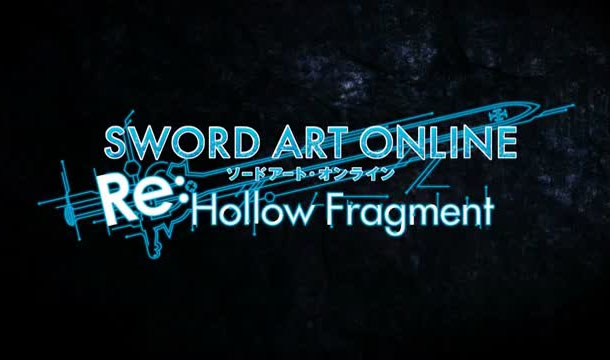 Two of my favorite things in the world are video games and anime which is why I’m always a little apprehensive when a game is created that merges the two. Well, the ones that we here in the States are privy to that is and that list isn’t exactly a long one. There has been many a game that has hit our shores that…well have come up short by some manner of mishandling or another. So when I got a code to review Sword Art Online Re: Hollow Fragment I was both thrilled and a little worried at the same time.

My worry wasn’t without merit though, as I’ve played the poorly translated Vita version known as Sword Art Online: Hollow Fragment. While I did enjoy to a certain degree, it was marred by localization issues, one of the biggest problems of ported titles into the US market, as well as a few annoyances with the character creation. It also probably doesn’t help that even the Vita version is a port of the PSP game Sword Art Online: Infinity Moment released only in Japan. That said, the PS4 version Re: Hollow Fragment has some major improvements made to it though as it is a port of the Vita version it still has lingering issues. 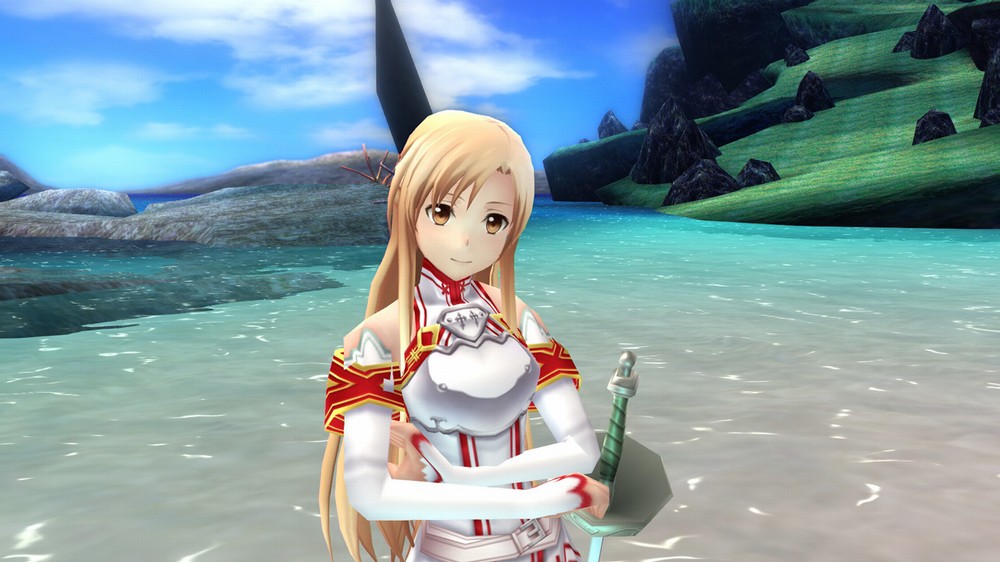 For those who don’t follow anime or have only heard of it, Sword Art Online is a Japanese light novel turned anime that has gained a considerable fan base since 2012 and it’s even spawned a sequel so far and both are quite enjoyable to watch. The series focuses around a VRMMORPG (Virtual Reality Massively Multiplayer Online Roleplaying Game) by the same name where players are trapped inside the game and death in the game means death in the real world. The series revolves around the main character named Kirito who like the other players stuck there must defeat all 100 floors of the game.

Re: Hollow Fragment starts out after the first arc of the books then deviates in an alternate timeline after an event that I will not spoil but is explained in the opening acts of the game. Kirito and his company of friends emerge on the 76th floor of the game unable to return to the lower levels after being stuck in the game for two years after a glitch in the system. The developers took that into consideration when designing pretty much everything about Sword Art Online Re: Hollow Fragment including the fact that Kirito is Level 100 when you first get control of him. 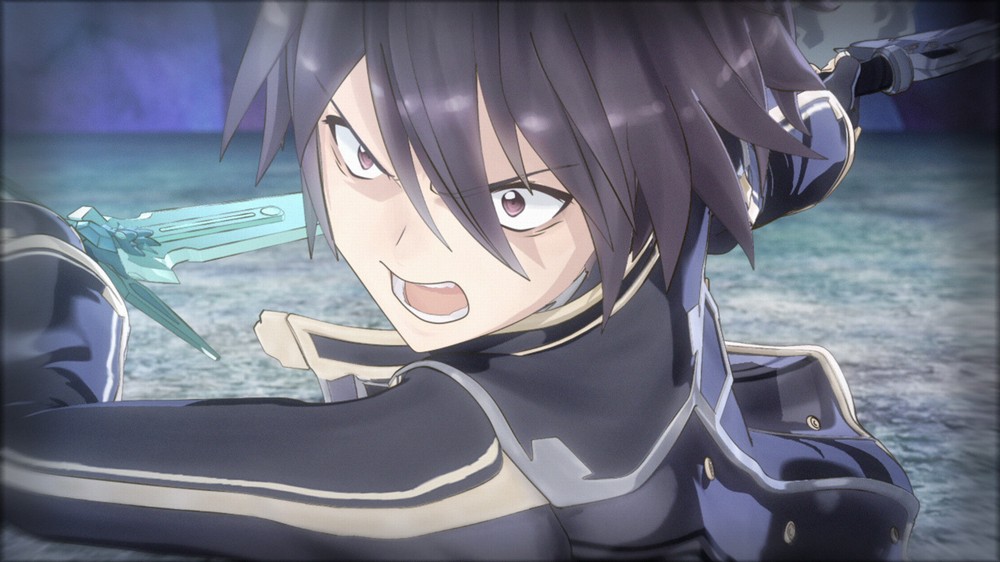 While you have an astonishing number of skills from the start it still feels like your starting from Level 1. The biggest reason for this is that the level cap is now 300 so you’ve still got a long way to go to hit max level, much like a real MMO. One of my favorite things about Sword Art Online Re: Hollow Fragment is that it’s an offline RPG emulating an online RPG right down to friend messages, quests, a somewhat mote character creation and the inability to log out of the game…just kidding on that last part. For real though the menu screen log out button is disabled just like the show.

You do get to create a character and name them from the beginning which will represent your avatar as you explore the floors of Aincrad, engage in combat and interact with NPC in towns like Arc Sophia. The one thing that I didn’t really like about the character creation in the Vita version also returns in the PS4 version sadly though. Even if you spend the time to make a custom character all the major cut scenes as well as story skits all consider you as the main character Kirito both visually and otherwise. This is particularly troublesome to the story if you create a female character, new to this version, as you are married to an in-game female character known as Asuna. It’s a bit odd that they give you the option, though a welcome one to draw in new players, if they just override it during the main story. 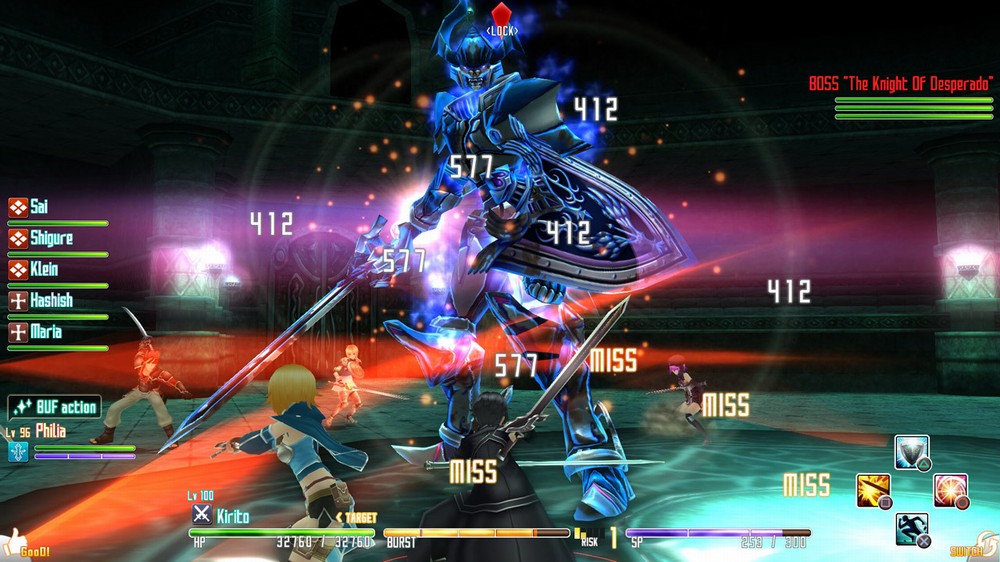 Regardless of what your character looks like the combat is easily my favorite part of Sword Art Online Re: Hollow Fragment. The combat is fluid and fast paced similar to newer MMOs like Rift or Final Fantasy XIV. The brilliant part is that they designed the whole combat system after a real MMO. Attacks and skills have cool down timers and the Burst gauge acts a stamina bar of sorts. You have a basic attack of course but many more can be learned by leveling up with an exhausting skill branch system as well as mastering a bunch of different weapons types. I must say though that I am still partial to the default dual sword set that the Black Swordsman himself is famed for.

While you may be partial to Elucidator and Dark Repulser like I am there are lots of new more powerful weapons to discover in the floors to come as well as the mysterious Hollow Area. If you’re like me then you’ll want to pick up some of the available quests from the main gate area of each town. It’s a great way to level up and explore each floor to its fullest and it’s usually a requirement to finding out who to effectively defeat the big boss on each floor. The one complaint I have with moving around the world is that the character moves around a little too fast and doesn’t feel grounded to the environment. 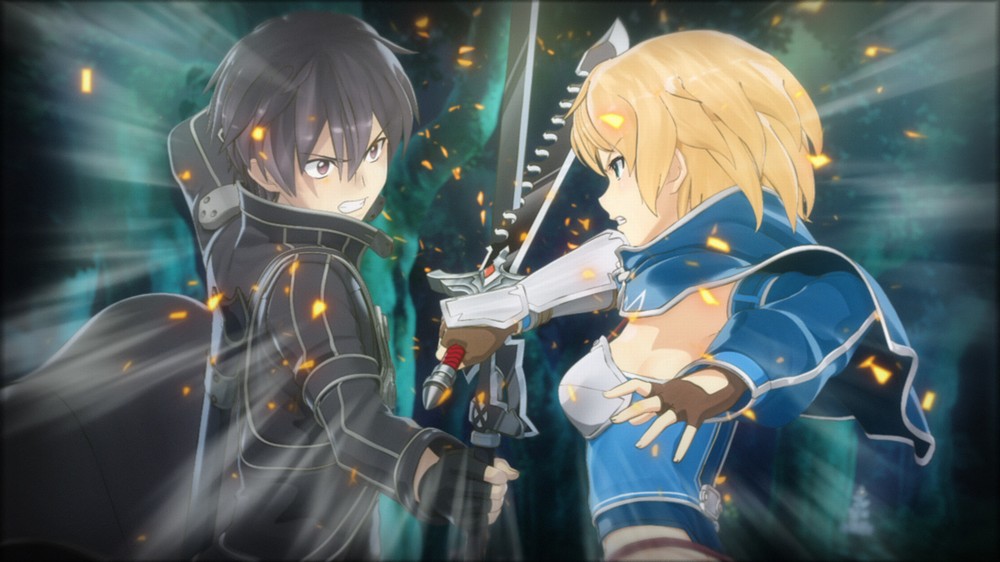 When you’re not in battle or hunting down the boss room of each floor you will be spending a LOT of time in Arc Sophia. Sword Art Online Re: Hollow Fragment got a proper localization this time around and they definitely took full advantage of it to tell the story the way we were meant to experience it. There is still no English audio track so you’ll have to do with reading a lot which is fine by me. Re: Hollow Fragment also contains some elements of a dating sim mixed in with the conversations again tying things back to the show, as Kirito is often admired by many of the female players.

The town hub of Arc Sophia presents a lot of the game’s story but also one of its biggest problems as well. The game is perfectly capable of running like butter during fights even when multiple allies and enemies are on the field alongside your character. Any time you go to Arc Sophia though it is plagued by framerate drops left and right. It’s not unplayable by any means it just seems odd for this to occur. The city is randomly populated by a lot of NPCs giving the illusion that you’re among other real players and if the game was online I could see a reason for it like many of the real MMOs that I’ve played but not here.

Sword Art Online Re: Hollow Fragment does actually have some online functionality but it rather limited. You can invite or create and invite other real players to join you in exploring areas and do missions like a real MMO but that’s really the extent of the feature but it is a nice function and adds to the whole illusion of a proper MMO. For owners of Sword Art Online: Hollow Fragment you can upload your save date from the Vita to the PS4 after a game update to pick up where you left off but there is no cross-save function so it’s a one way trip. 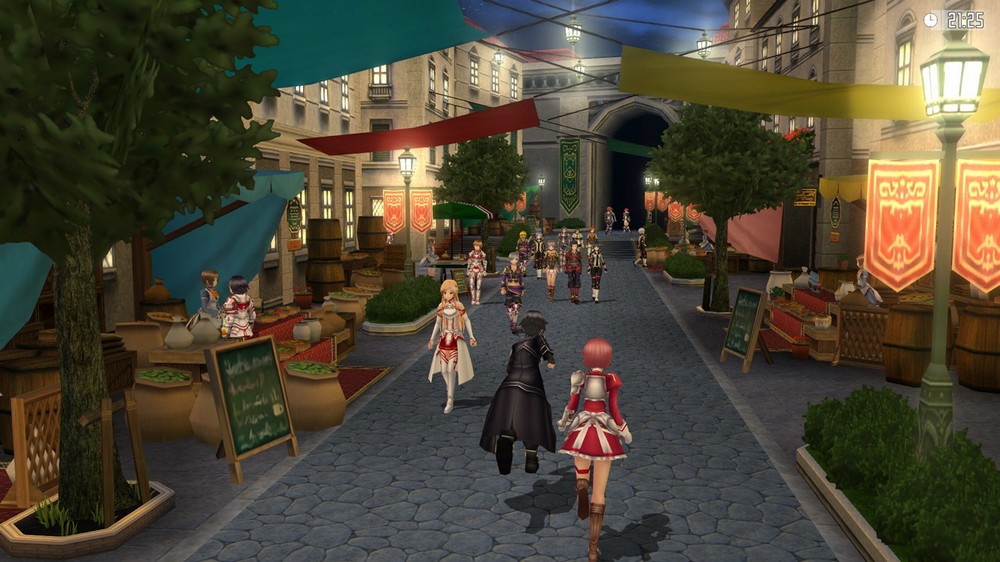 So the real question at the end of the day comes down to this. Is the third videogame release of Sword Art Online really worth it? Sword Art Online Re: Hollow Fragment for me was quite enjoyable even with its technical issues and rather mote character creation feature. I do appreciate the effort into making me feel like I was playing an MMO, but glossing over it with the story telling sort of ruined that a bit. That said, this is without a doubt one of the better examples of taking a very tricky anime and turning it into a fun and engaging experience. 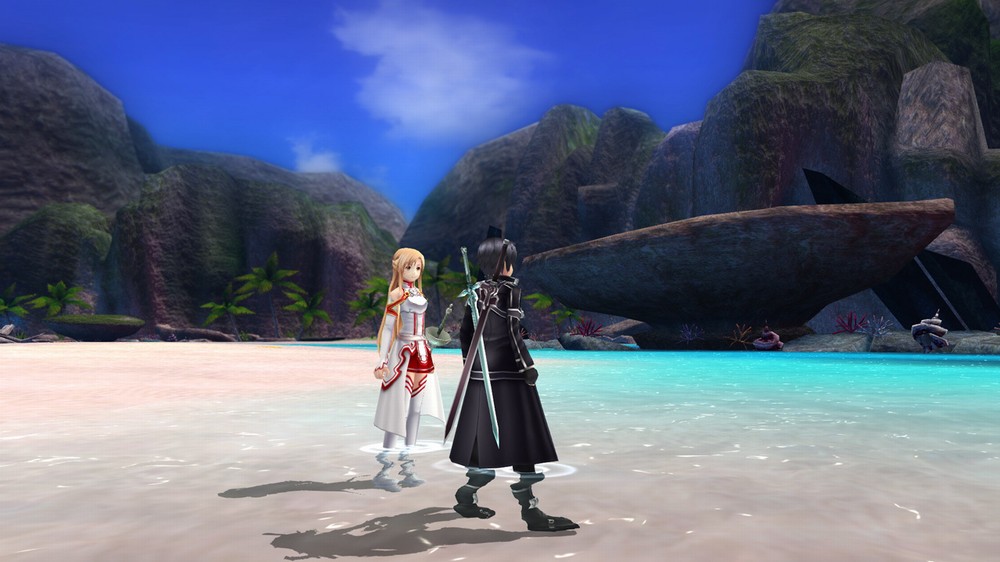 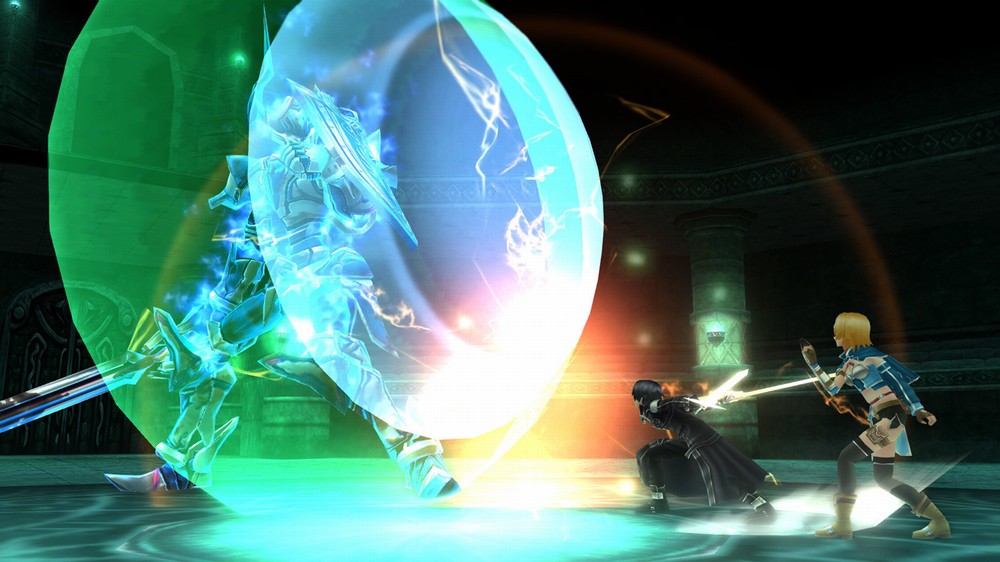 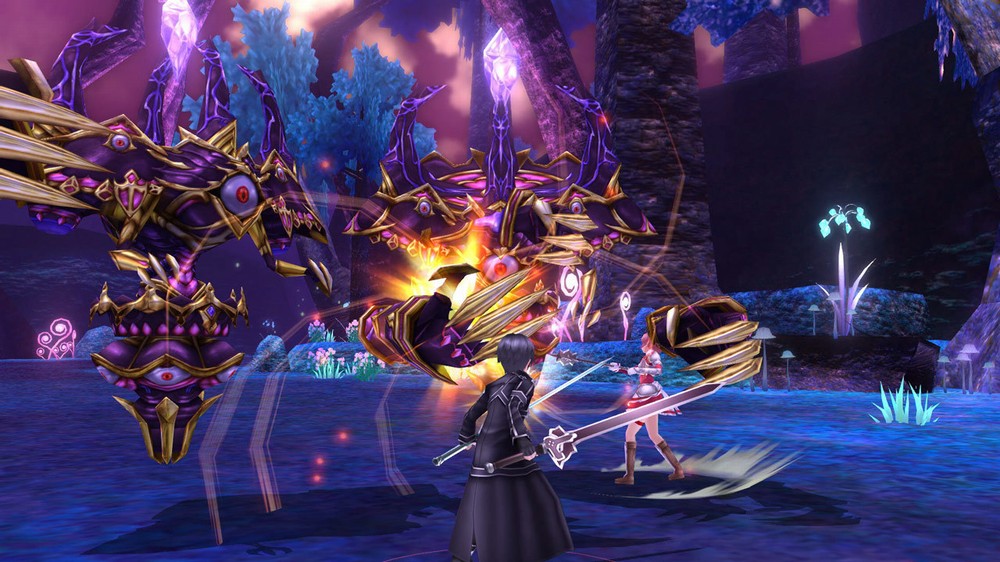 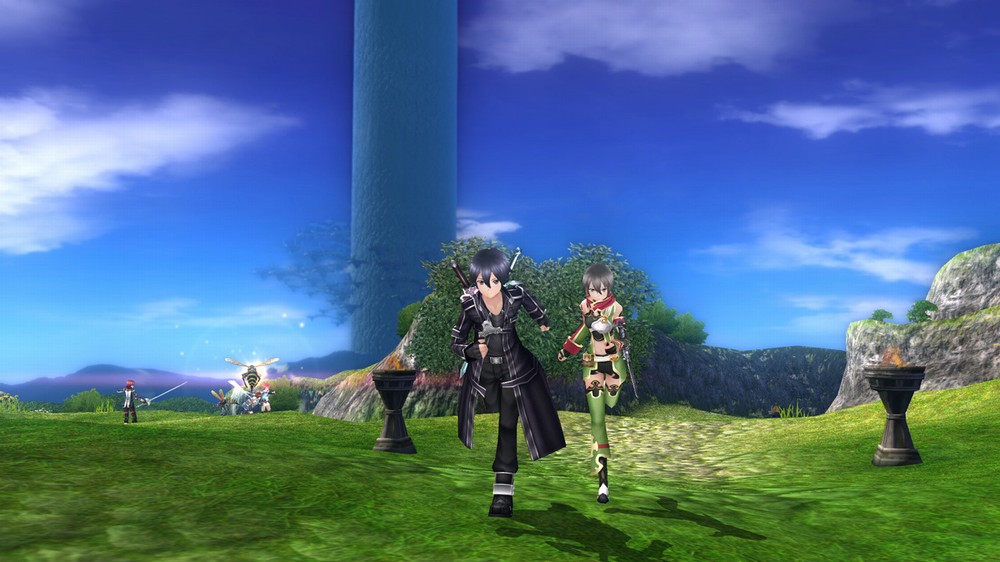 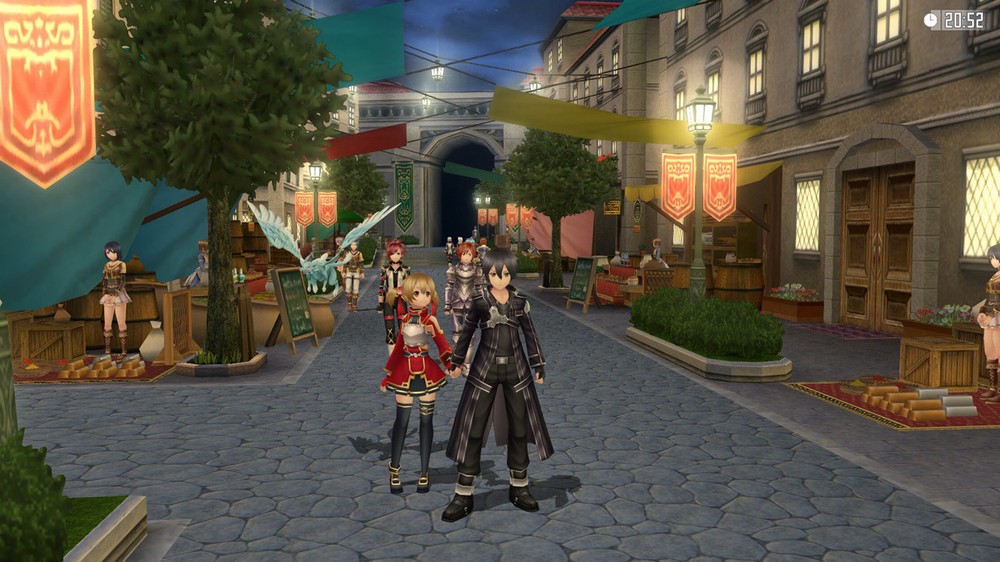