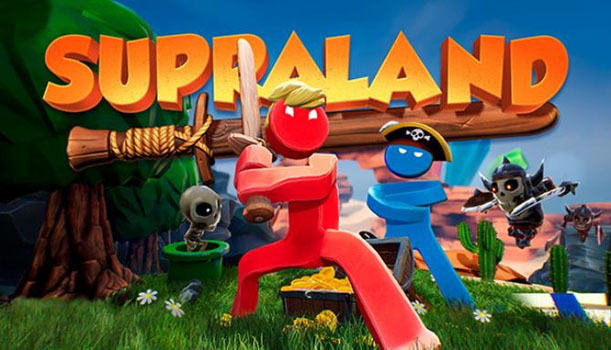 - Late game mechanics not as obvious
- Enemies cumbersome at first

A great little adventure with a focus on exploration and a bit of puzzle-solving.

Childhood can be one of the greatest times in a person’s life. It’s a time when imagination and wonder can blossom into crazy ideas and epic stories as you use what you have at hand no matter your walk of life. As I dove into Supraland for the PlayStation 4 I couldn’t help but get some childhood vibes as I explored this first-person sandbox adventure. Plus when you market this game’s design inspiration from the like of Metroidvania, Portal and Zelda what could possibly be better than that?

You play as the child of the King of the Red Kingdom who is called to solve your side’s water shortage problem caused by the people of Blue Ville. What is most interesting is that your world is found within the literal sandbox of a real child. Supraland at its heart is definitely an adventure that encourages exploration as I quickly discovered.  Which means you’re going be spending a lot of time searching every nook and cranny to find every coin, ability, powerup and tool. 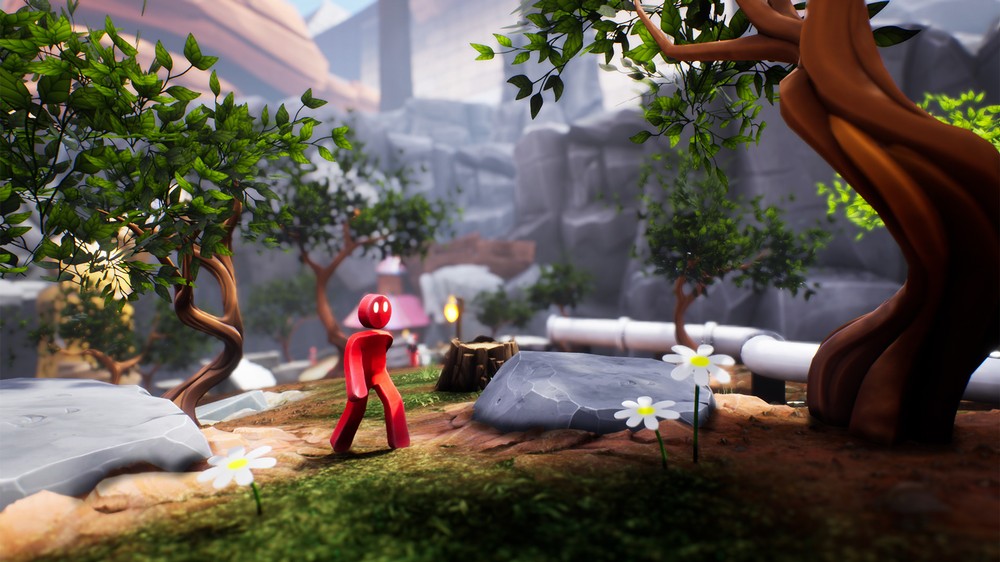 For starters there are 6 Golden Barrels hidden throughout the earlier area of the game. Most of these will reward you with the ability to purchase mandatory tools and essential character upgrades like the Force Cube and a Double Jump. The catch is that you have to use the coins that you collect to purchase these upgrades. That even includes the upgrade ability to carry more coins to purchase upgrades that will cost more than you currently can. As a fan of Metroidvania style games this way of character progression makes things interesting. With each new ability and tool you can go back and reach previously inaccessible heights and depths in each of the areas.

You’ll find yourself climbing, crouching and flinging yourself across zones as you traverse many household items such as erasers, levels, swigs and even plastic building blocks. To your tiny character these items become bridges, platforms and giant towers as well as obstructions like doors and walls. Much of my enjoyment with Supraland comes from its cleverly created puzzles which you’ll need to solve to get past timed mechanics like doors or launch pads. It’s the environmental puzzles that I liked most though as you use the Force Cube not only as solution to pressure plates but a way to a little extra altitude to access some of the trickier locations. 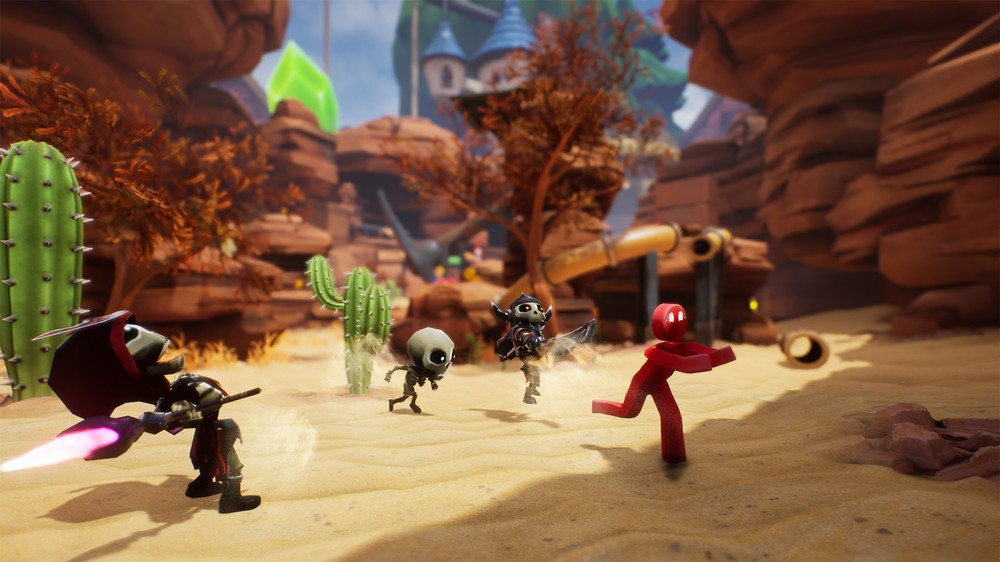 Speaking of tricky, one thing to I constantly had to remember at first is that as you can’t jump very high being so tiny yourself so jumping up on the Force Cube from the ground is out. That means you have to spawn the Cube underneath you as long as space allows. The other thing that I loved to do is drop it on the heads of enemies when timed correctly. Sure you a sword and other ranged weapons but there’s something hilarious about dropping skeletons with a purple box. Another thing that I found a bit tricky is the controls at times is your character’s movement especially when in midair.

Once you get the ability to double jump and triple jump you can actually jump around obstacles. The touchy part is that while changing directions in midair is cool the controls are a little looser than I’d like. This makes it incredibly easy to overshoot platforms and narrowly suspended pathways. Luckily in many situations there are shortcuts that can be activated to shorten your commute should you misstep. Messing up is a part of any game involving puzzle and Supraland is no different. There were multiple times where a puzzle solution was seemingly out of my reach until it dawned on me. That moment of “aha” is something that I’ve always enjoyed and there are plenty of those to be found in Supraland. 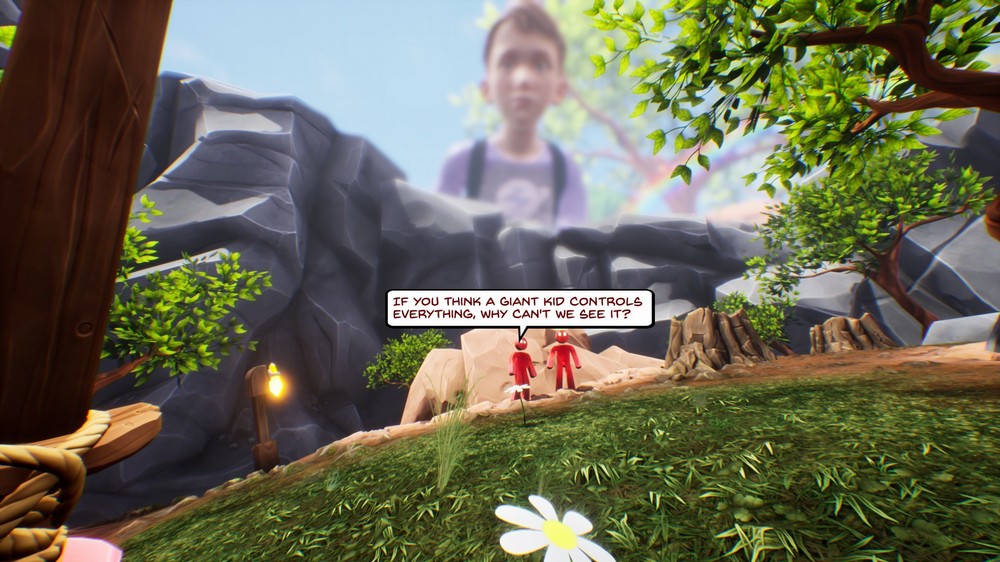 Another thing that you’ll find plenty of is the enemies that spawn in the various zones of the game. While it’s simple skeletons at first they will start to throw tougher armored ones at you as well as ranged mages. This seemed to happen as I gained more health as I found powerups in various chests or for purchase in the starting village. If you are like me you will find yourself back in that village a lot as you earn enough coins to purchase those upgrades previously just out of reach. The enemies give Supraland a sense of fantasy danger as well as being a source of money. They do tend to pop up at bad times though often skewing your attempts to solve puzzles. There is however an upgrade that deals with this little issue so it’s only a minor inconvenience.

What I found most interesting is that this whole adventure spanning some 25+ hours was created almost solely by David Münnich which is impressive. The world designs are impressive yet very colorful giving it a great fantasy feel that fans of Zelda young and old will love. I had a lot of fun and found myself constantly marveling at all the nooks and crannies that I found throughout my adventure. There are even several real-world pop-culture references and some awkward real life ones found throughout but many of them brought a smile to my face. The puzzles and even the little side quests that teach you the ropes of the various tools are well done. Though late in the game you’ll have to use a little thought utilizing the mechanics of other tools to figure out their usage.

In the end Supraland was a blast to explore its creatively designed environments with just a few tools to give players the edge they need to figure out their next steps and each new puzzle. The combat while not a primary focus is still interesting and varied as is the enemies that you encounter with even a boss fight or two. This is a great little adventure that doesn’t focus on collectibles but rather exploration that anyone who like a little puzzle solving thrown in will enjoy. Be sure to check out Supraland for the PlayStation 4 for a literal sandbox adventure. 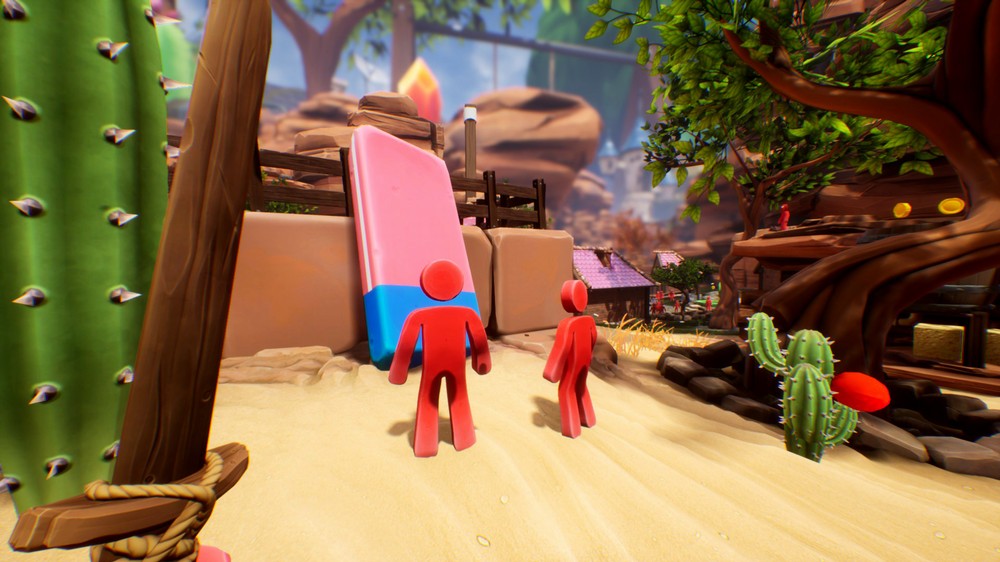 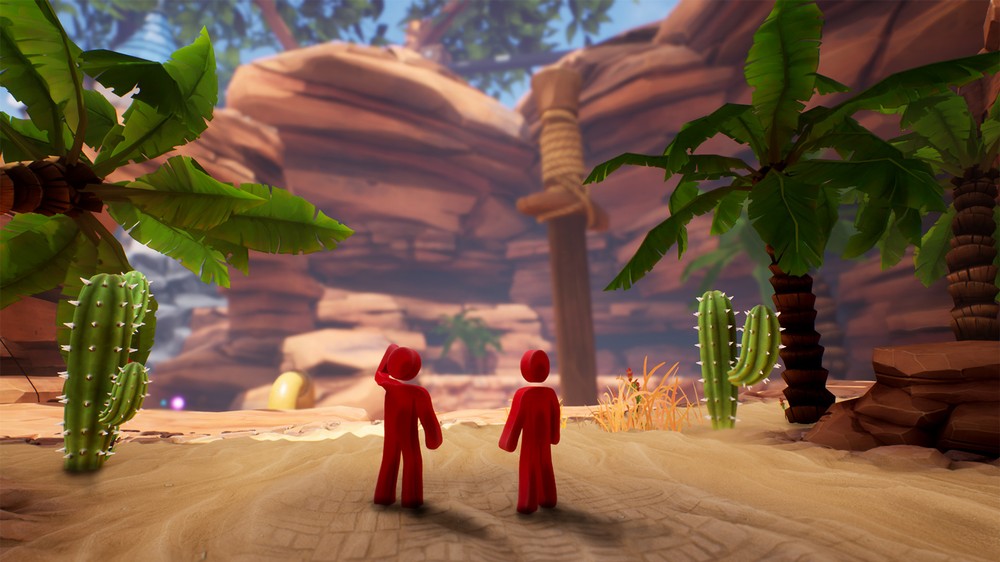 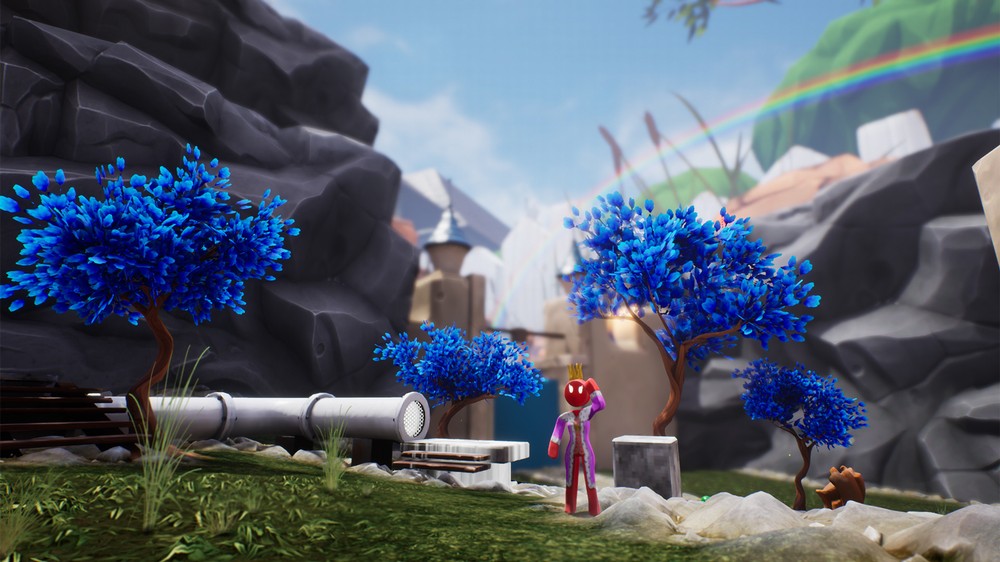