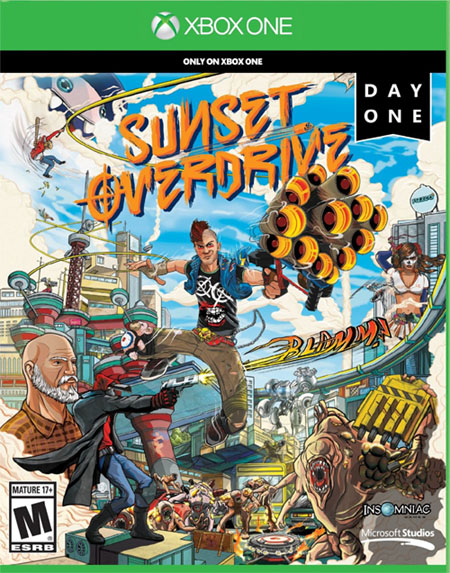 Good sense of fun, with a knowing sense of humour and general lack of seriousness.
Plenty of stuff to do, with a healthy dose of variety
Game rewards you for playing how you want to play

Controls can be a little fiddly at times, especially later in the game

One of the most unique gaming experiences, mainly because it’s not afraid to be fun.

Sunset Overdrive is the first Xbox-family release from Insomniac Games, who are known for their PlayStation exclusive series such as Spyro, Resistance and Ratchet & Clank. Taking place in the fictional Sunset City, where a new energy drink called Overdrive has turned the majority of the population into mutants, players must bounce, grind and swing their way through the city in an attempt to both help their fellow survivors, and ultimately find a way to escape the ‘Awesomepocalypse’.

The first thing that you’ll notice about Sunset Overdrive is that it doesn’t take itself seriously, but this doesn’t come across as derivative to either the player or the game itself. The main objective of this game is seemingly to have fun, and this is communicated by the game’s bright colors, quirky yet loveable characters, and its difficulty level. Though there are times where you’ll die within Sunset Overdrive, you’re never really punished for it, instead starting back at the nearest checkpoint, which are fairly generously doled out. Your character’s respawn animations are some of the best examples of the tone that Sunset Overdrive tries to set, with he or she emerging from a mummy’s sarcophagus, rappelling down the screen a la Mission Impossible, and even appearing in a Bill and Ted style phone booth.

Sunset Overdrive displays and almost teenage-like determination to go against the mainstream of gaming culture, with bright, colorful visuals, a peppy, punk-rock soundtrack, and a self-aware sense of humor that’s just as willing to poke fun at itself as at other games. When your protagonist is having an argument with the disembodied voice that’s trying to direct him or her on where to go next, you know that Sunset Overdrive doesn’t take itself too seriously. This intentional irreverence towards gaming culture encompasses the character customization screen as well, where you can dress your character in a wolf head mask, tiny pink panties and have them carry around a flaming guitar, if you so wish. Even the weapons have a certain charm to them, especially when you consider that the first gun you’re given is a phallic shotgun that goes by the name of the ‘Flaming Compensator’. Coupled with a machine gun that fires vinyl records, an RPG that launches exploding teddy bears, and an AoE weapon that places watering cans full of acid, you soon have an arsenal fit for a madman. 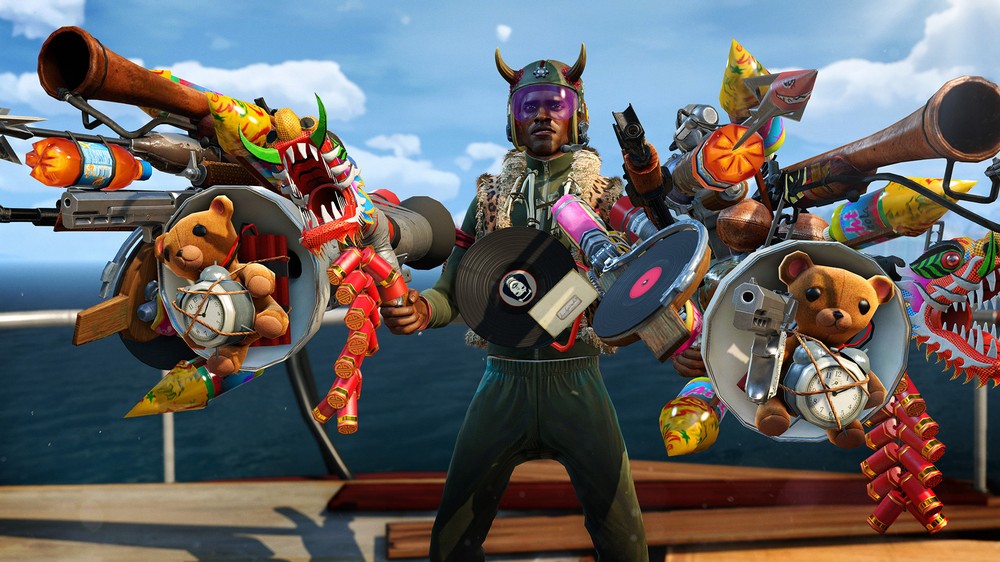 The way in which you use these weapons highlights just how focused Sunset Overdrive is on tailoring its gameplay to what you want the experience to be. Weapons will only get stronger if you use them, and you aren’t really punished for not using particular guns, so if, like me, you enjoy using a combo of Flaming Compensator and High Fidelity (the vinyl-firing gun mentioned earlier), then these two guns will soon level up to become the most powerful weapons in your collection, causing more damage and being able to hold more ammunition. Similarly, if you prefer to engage in combat while bouncing around, or while grinding, you gain badges for doing so. Earning a certain number of badges allows you to combine them and earn character modifications, such as 10% more damage while grinding, or more damage when using single-shot weapons over rapid-fire ones. However you choose to play the game, Sunset Overdrive will reward you for it, and allow your particular play style to become more effective as the game goes on.

On top of badges and weapons is the Amp System, which is yet another form of customizable modifier. Amps serve to enhance your character and their weapons in various ways, such as adding elemental damage to weapons, giving your character a defensive force field, or allowing melee attacks to shoot fireballs. Amps are obtained by collecting various items from around the game word, such as balloons, camera lenses and neon signs, and then taking them to Floyd, one of the main NPCs within the game. Floyd will then brew up a batch of new Amps for you, and while he does this, you engage in Sunset Overdrive’s own take on the Tower Defense genre, defending brew sites against waves of onrushing mutants. Equipped Amps only become active when you fight with what the game calls ‘style’, i.e. grinding and bouncing around until you fill up particular sections of the style meter. It’s a good way to keep you moving during combat, and provides a unique way to engage your enemies. 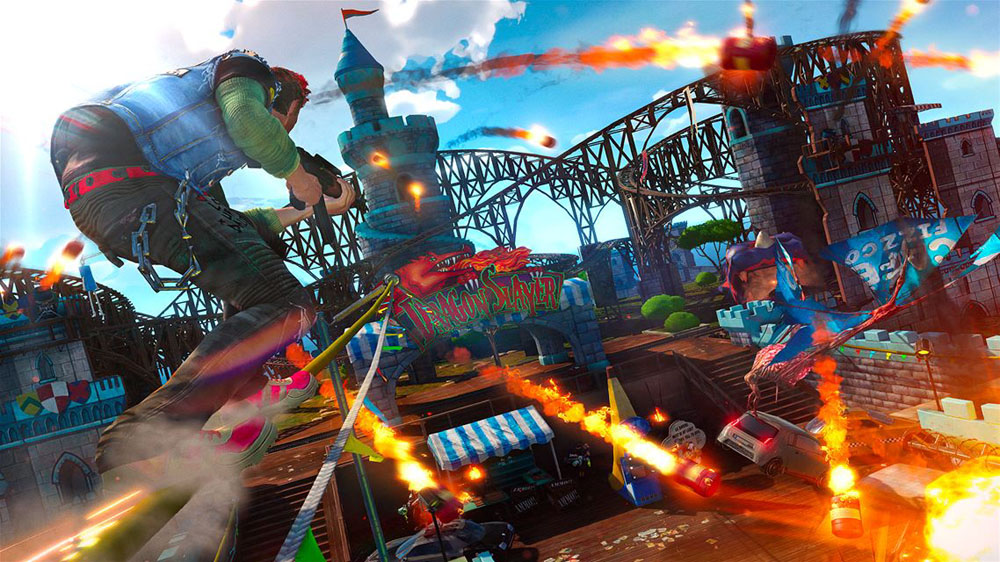 Much of Sunset Overdrive’s narrative has you performing fetch quests for various factions of characters, but boiling it down to just that doesn’t really do the game justice. Sure, you’ll spend a lot of time going from Point A to Point B in order to collect a certain something for a particular character, but it’s what you’ll end up doing once you get to Point B that provides a good deal of the game’s variety. In one particular mission I ended up grinding around against the clock, smashing open water valves in order to drain a flooded water plant, while in the next I was directing a robotic dog around, enticing him to blow up the enemies that were swarming me. Even the side missions within Sunset Overdrive feel as though they’ve been given a healthy dose of love and attention, rather than just being shoved in last minute as an excuse to give the player something to do and up the number of hours of content that can be listed on the back of the box.

One of my only real complaints about Sunset Overdrive is that, particularly later in the game, you need to start bending your hands into weird, claw-like shapes in order to pull off some of the abilities, particularly at the speed in which the game requires you to do so. Grinding along a pole, bouncing off of an air vent, air dashing, then slamming into the ground to then perform a super jump is an awesome way to work your way across the city, but it requires a quick mind and even quicker fingers to pull off. Considering that while you’re doing this you’ll often be expected to be aiming and shooting at enemies, it’s a wonder that I didn’t often come away from a session of Sunset Overdrive both mentally and physically exhausted.

Often, when someone asks me what a game is like, it’s easy to rattle off ‘Oh, it’s like Call of Duty’ or Grand Theft Auto or something similar. It’s not often that I need to name two or more games to describe something adequately, but in terms of Sunset Overdrive, it’s definitely necessary. If you were to make a Sunset Overdrive cake, you’d throw in a healthy dash of Saint’s Row’s attitude, mixed with a large drop of Crackdown’s exploration, with a pinch of both Tony Hawk’s and Jet Set Radio’s traversal mechanics. Add a dash of tower defense and some healthy splashes of the brightest food coloring you can find, and you’ll almost have something that resembles Sunset Overdrive. Despite this extensive list of comparisons, as a whole, Sunset Overdrive is one of the most unique gaming experiences that I’ve had recently, mainly because it’s not afraid to be fun, and places a whole lot of emphasis on the ‘game’ section of video games. If you’re looking for something to put a smile on your face, and provide a dash of color in your life, particularly now that the weather’s turned grey and dull, then Sunset Overdrive is an excellent option to look at. 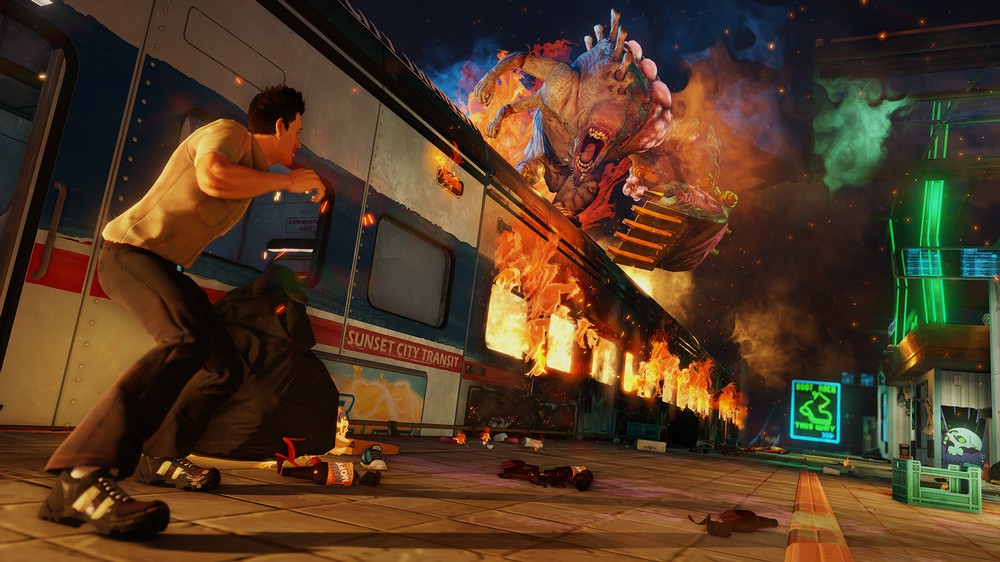 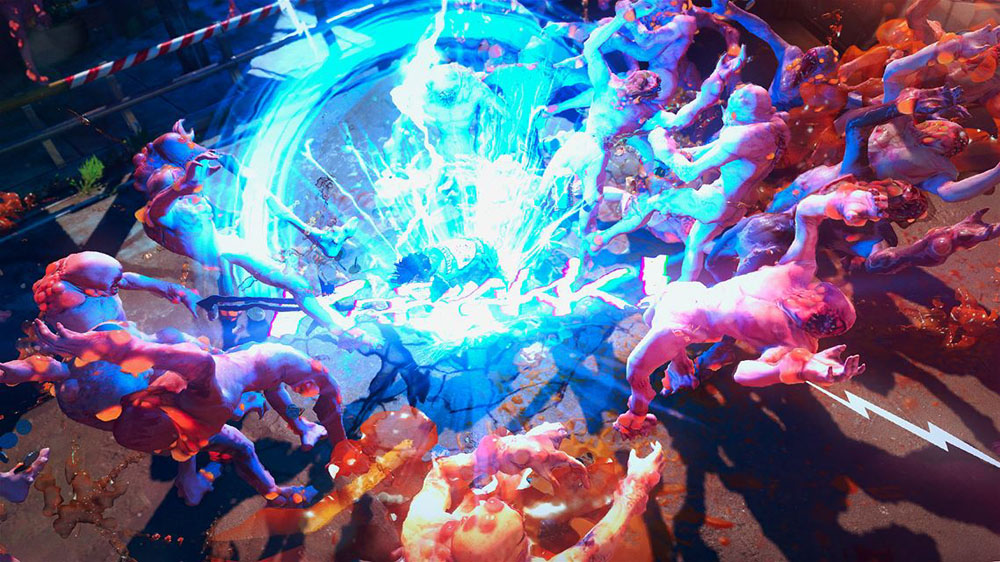 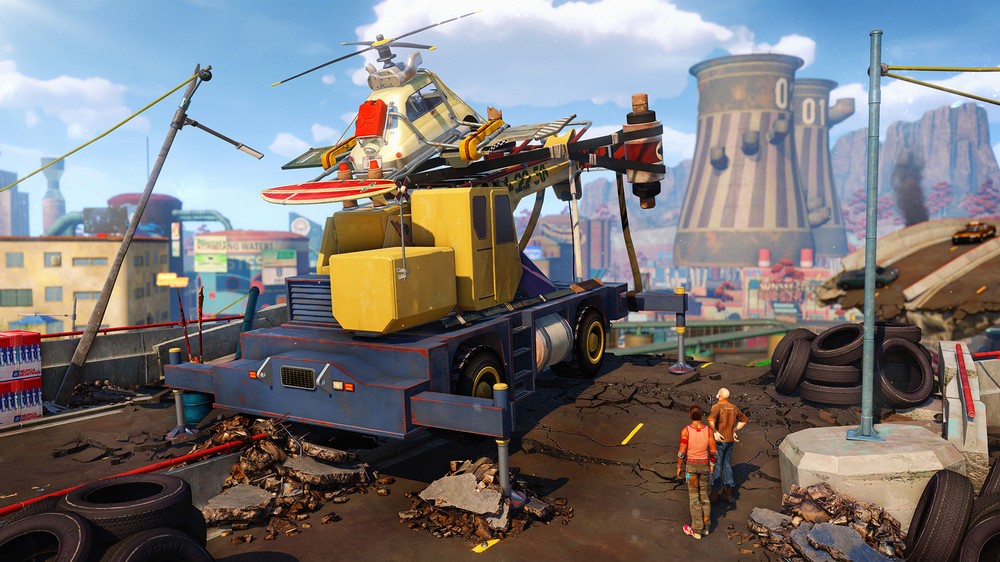 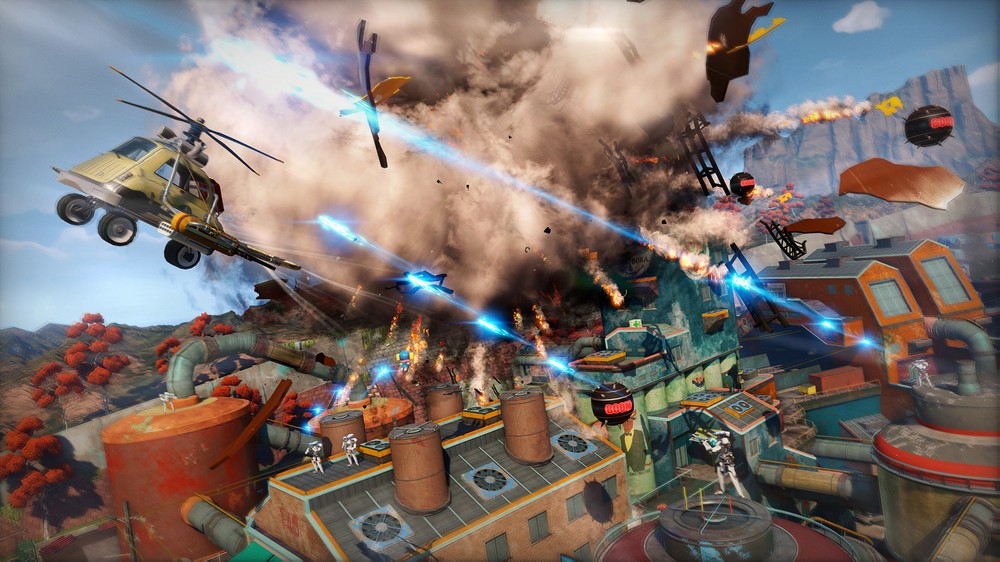 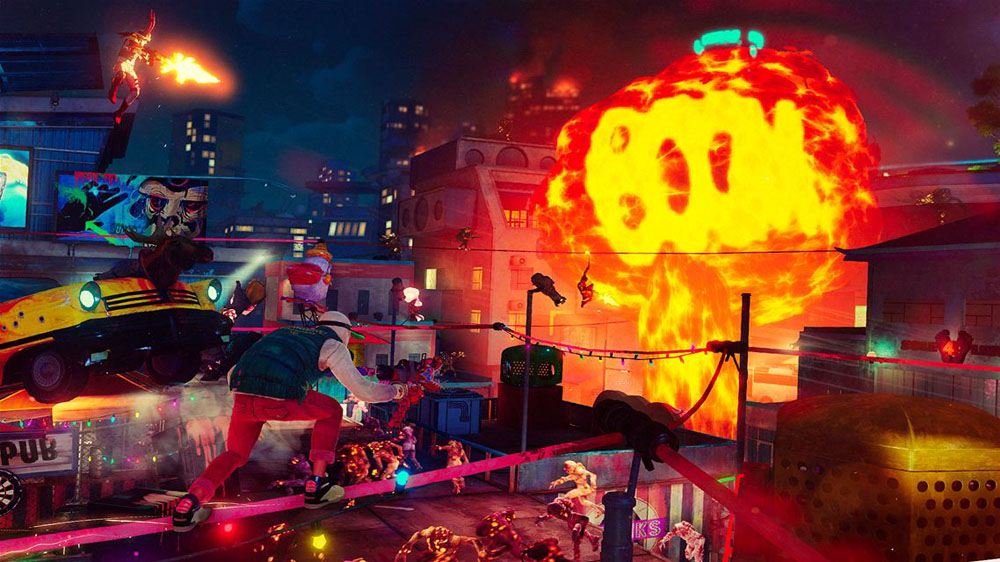 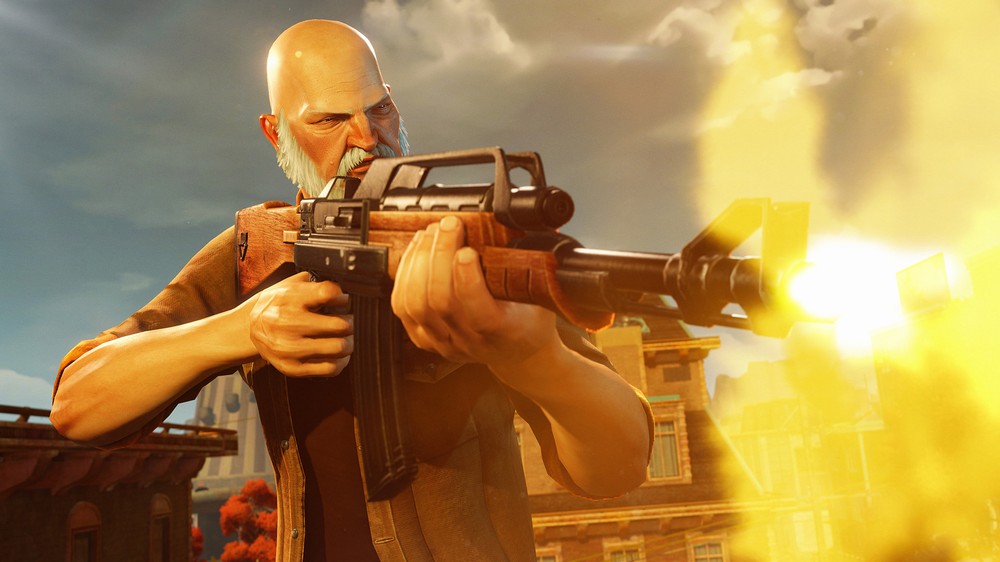 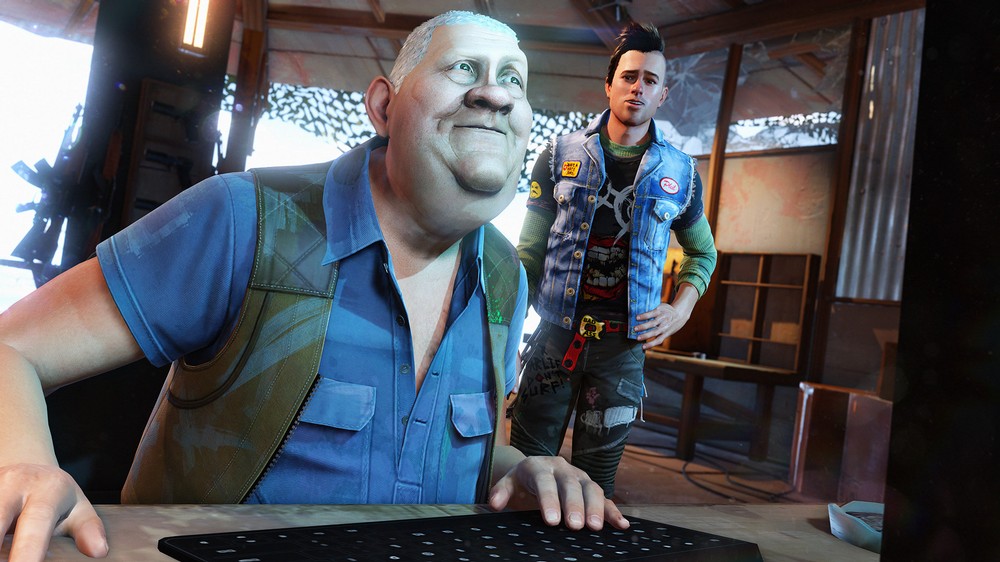 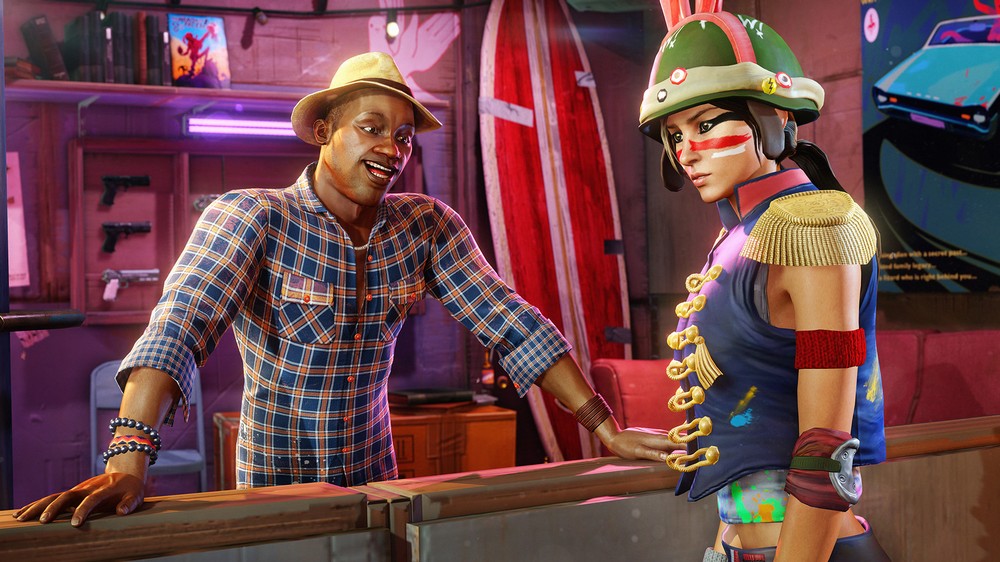 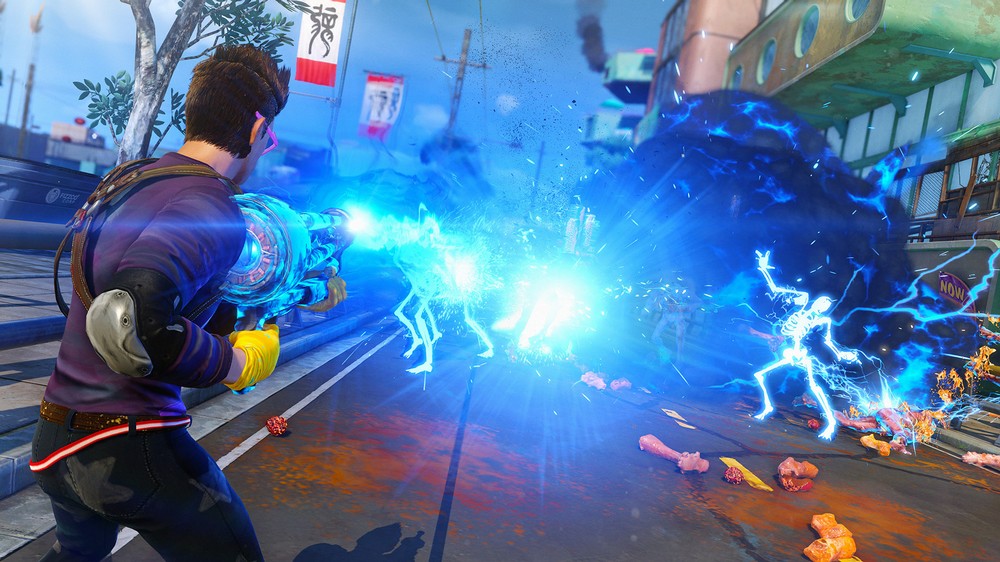 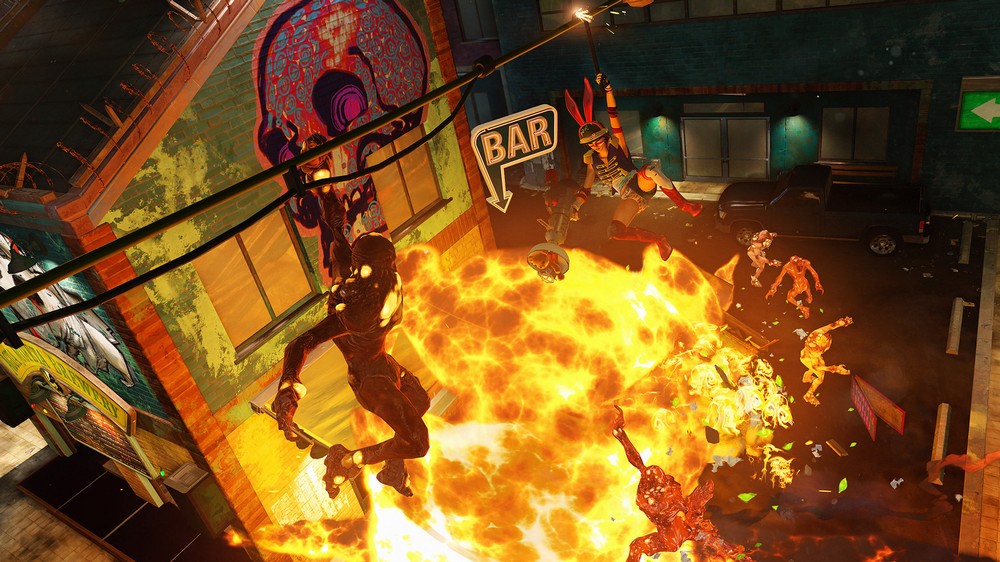 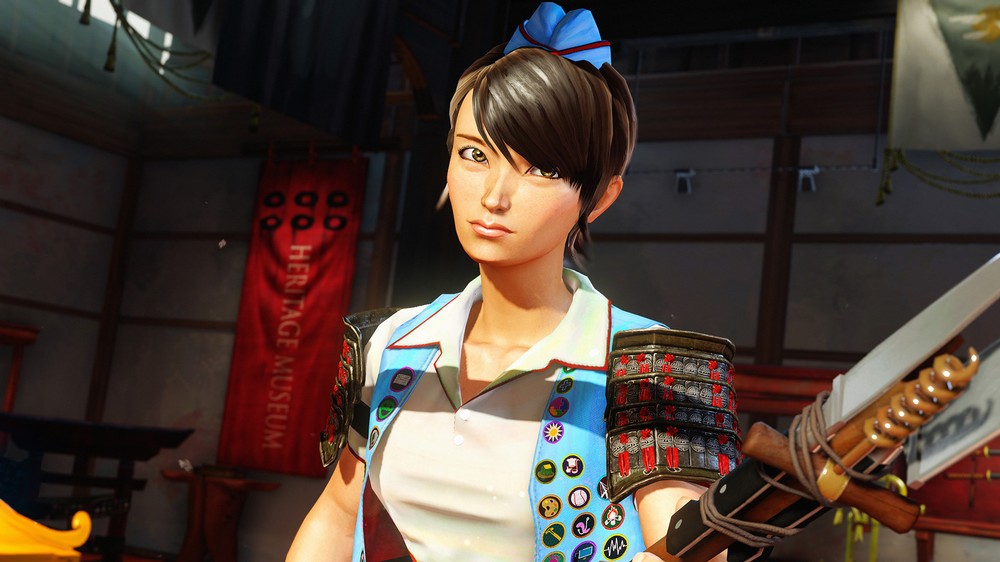 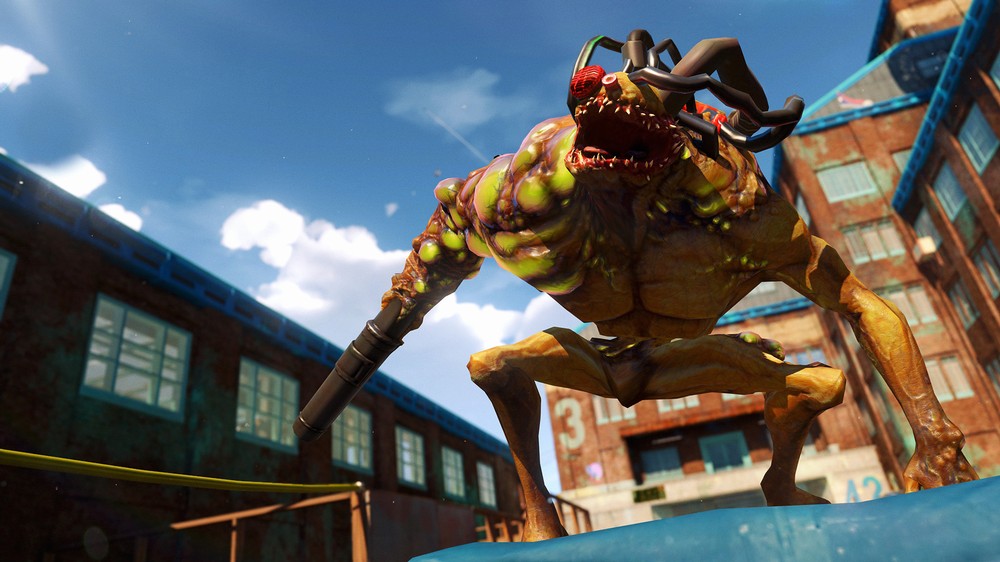 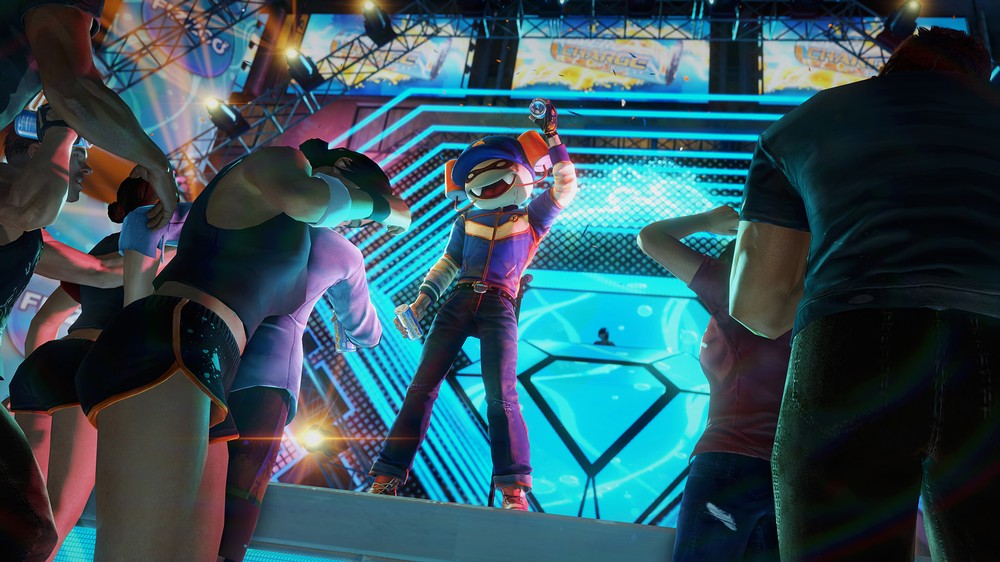 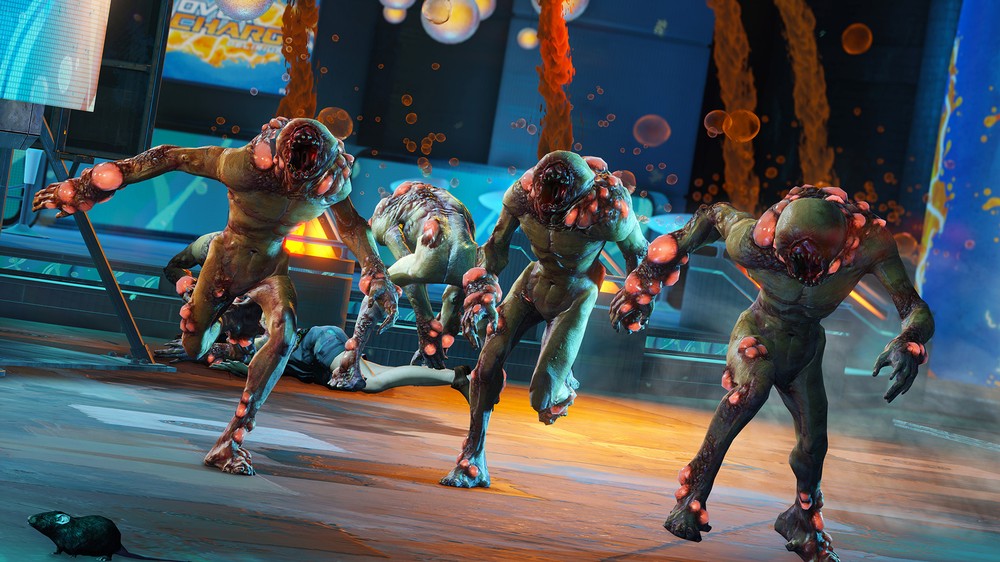 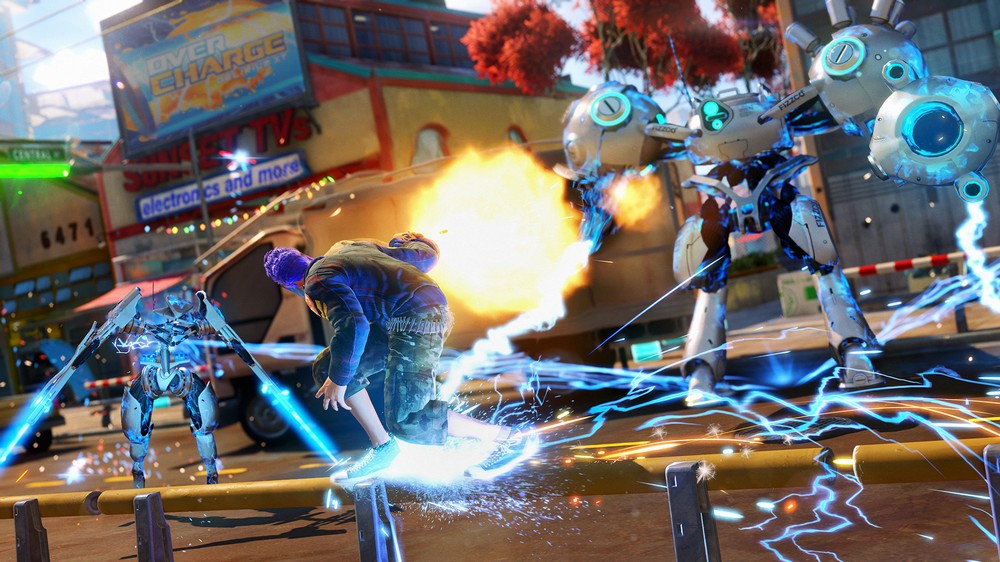 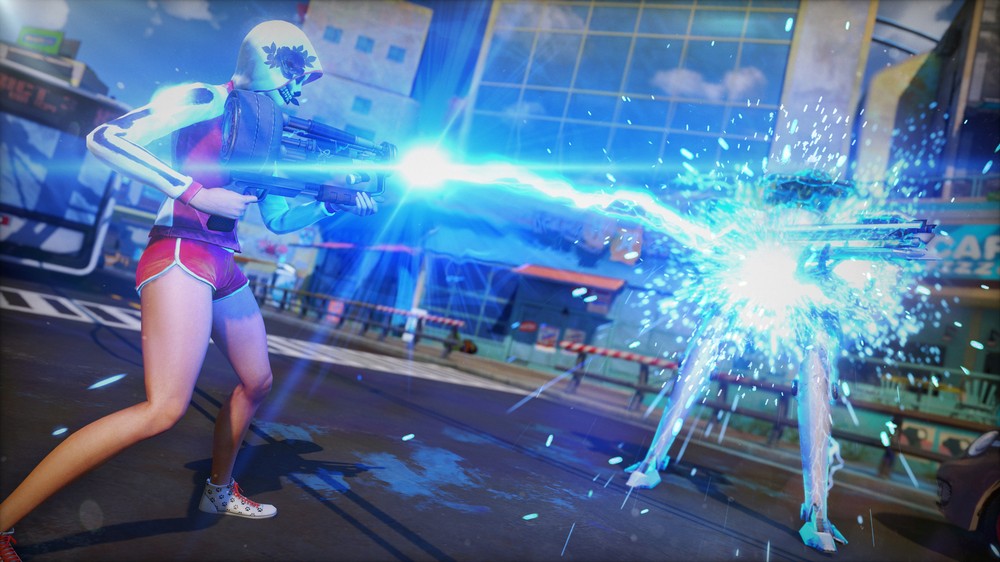 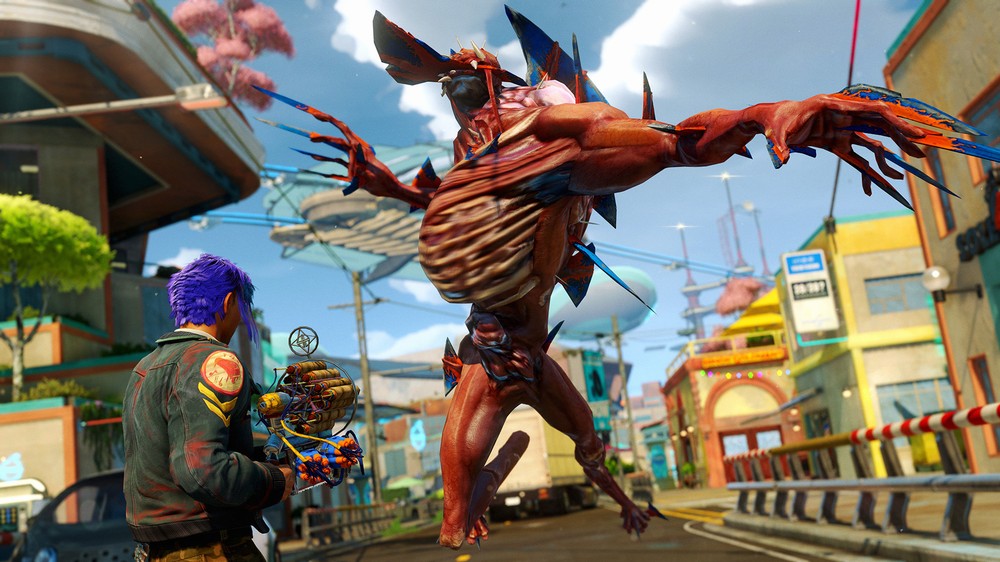 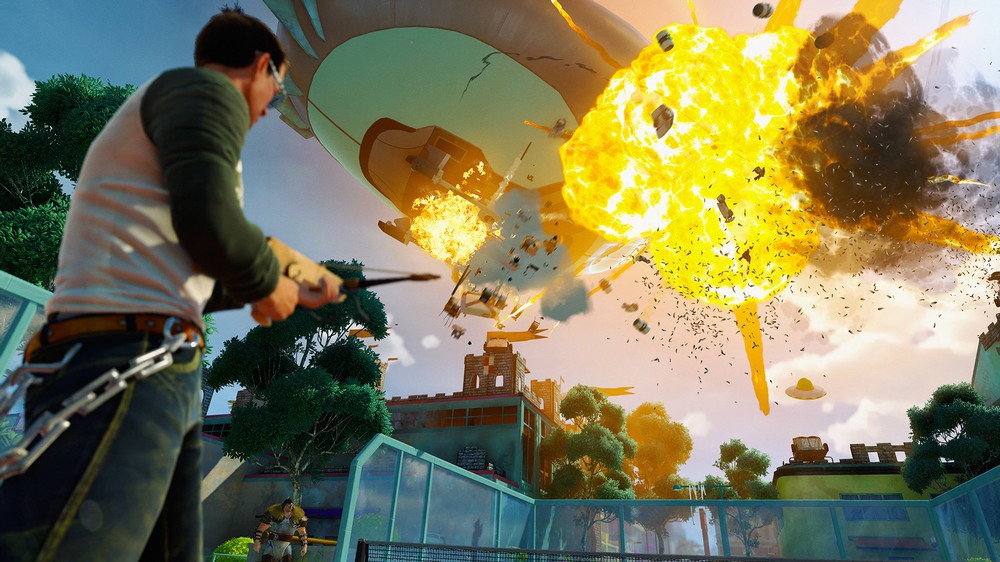 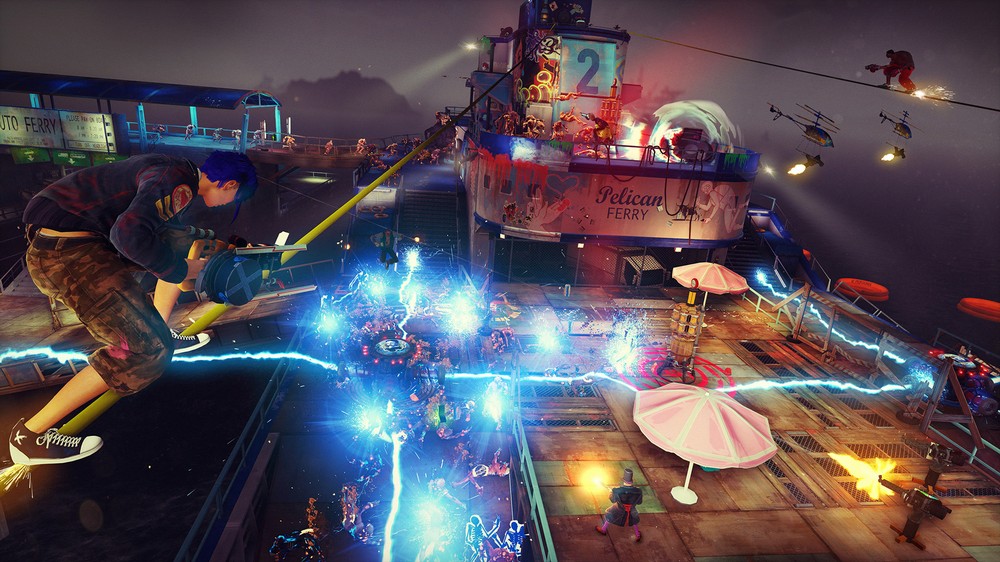 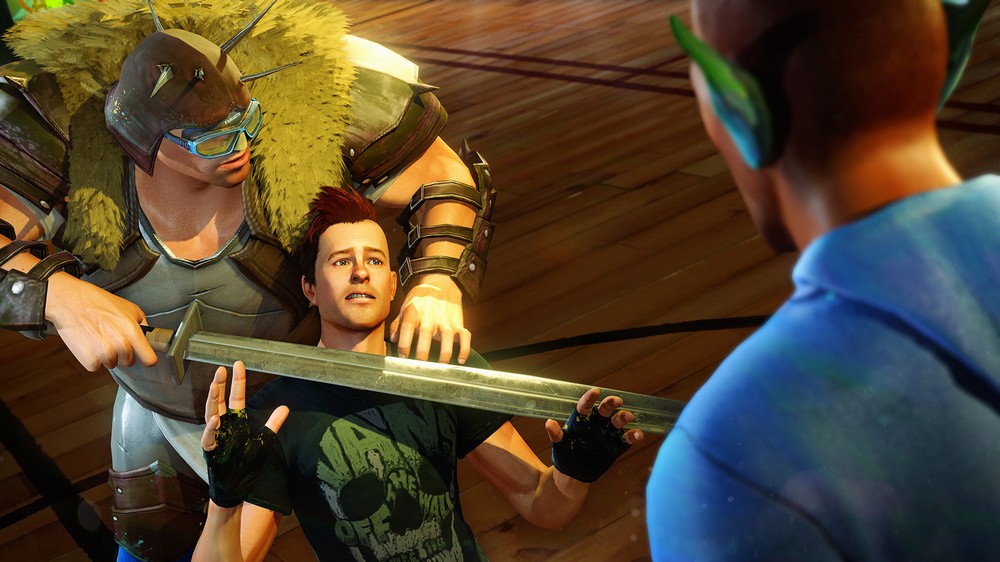 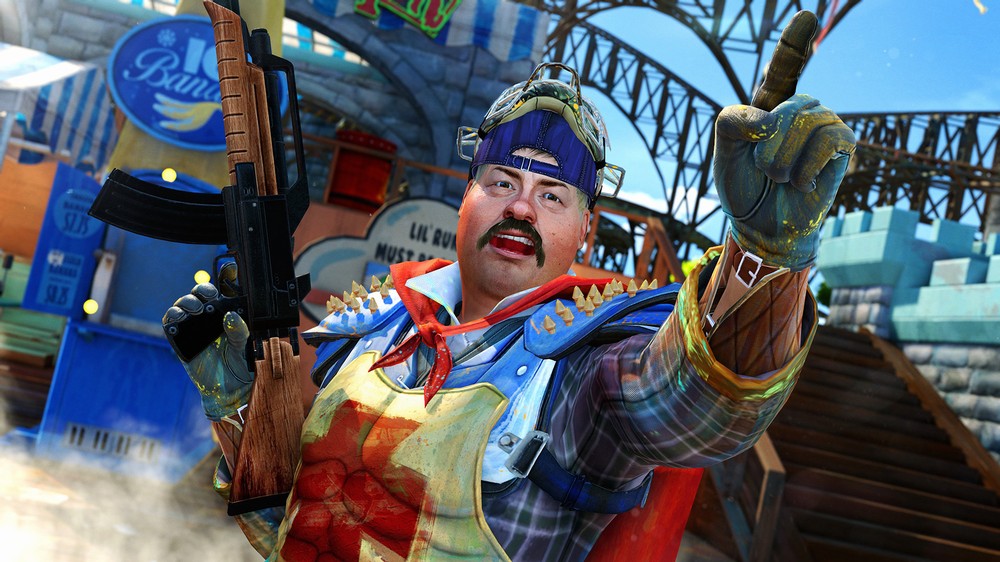 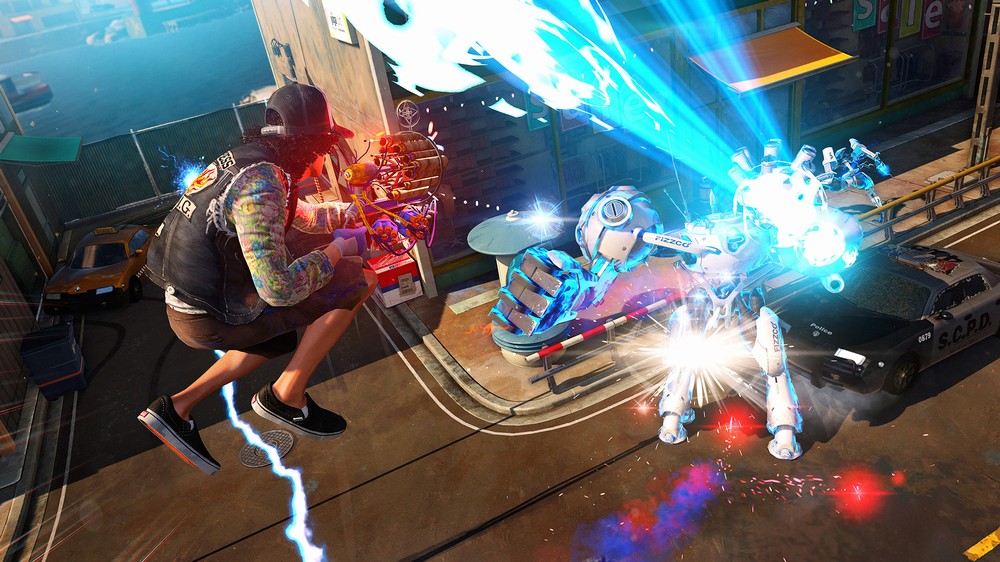 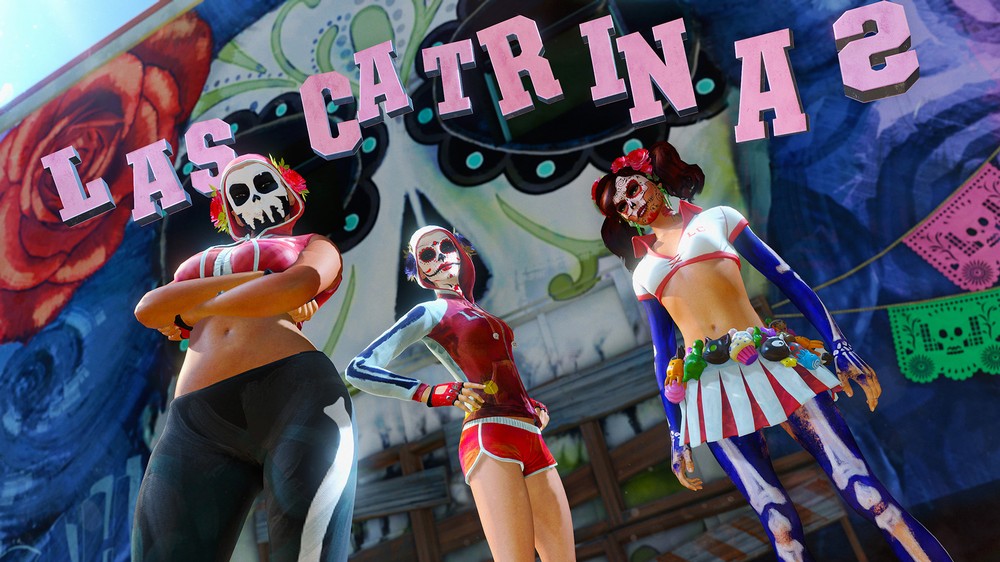 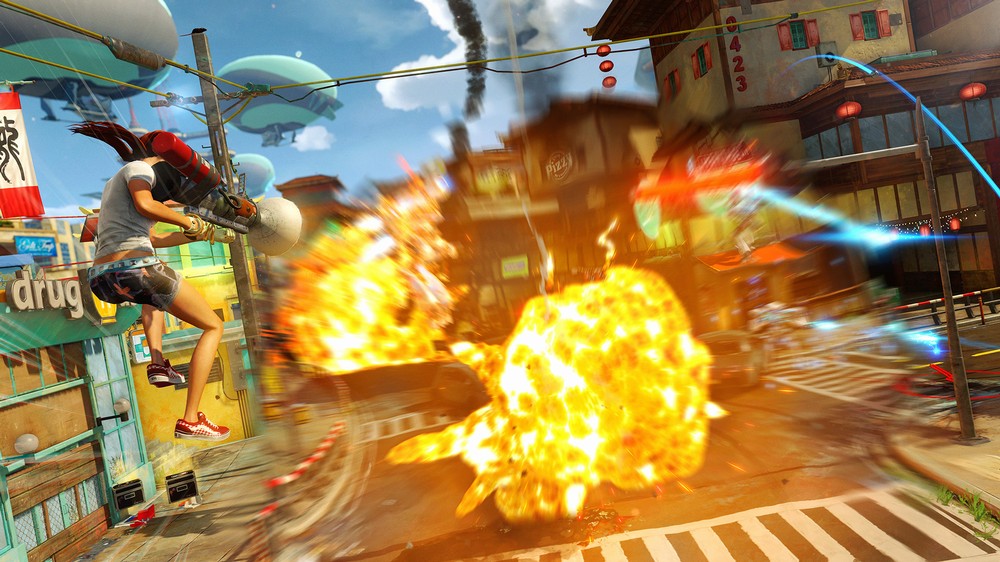 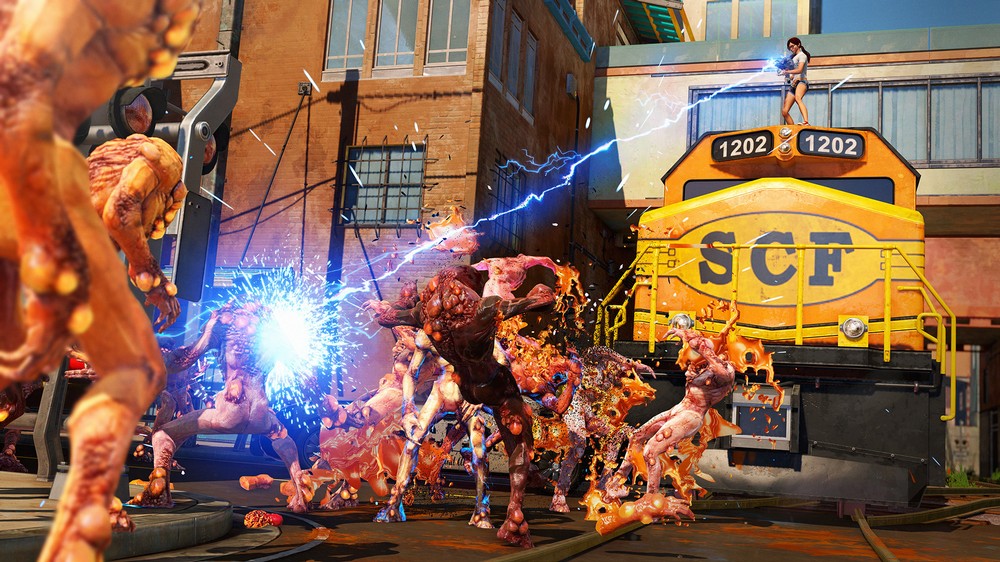