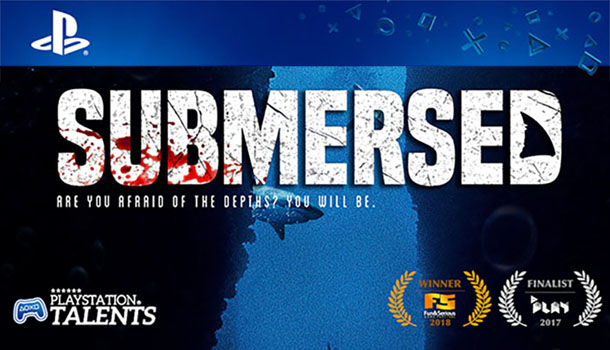 A generic and clumsy game unworthy of next-gen gamers and hardware.

First off, don’t get this game confused with Submerged like I did when accepting this assignment. It’s hard to believe that one letter can change a game so much. Instead of exploring beautiful outdoor environments and a flooded city I quickly found myself trapped in an underwater research station. Submersed reminded me a lot of one of my favorite movies, Deep Blue Sea, also set on a failing research station where the occupants were slowly getting picked off by a giant shark that also happens to be the result of some sinister experiments. 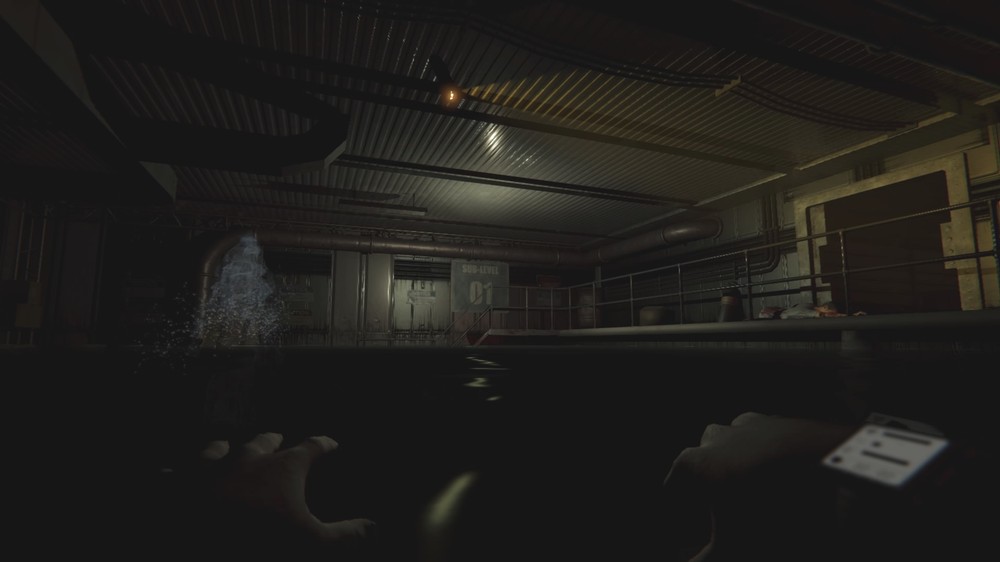 The game wastes no time in getting started as you find yourself scrambling to escape the station as control panels spark, alarms are buzzing, and parts of the lab are flooding. In true adventure game fashion you will explore your surroundings, read all sorts of memos and documents that provide background info, collect random items for eventual use in minor logic puzzles, and interact with your surroundings, flipping switches and levers, crawling through air vents, etc. Submersed never elevates the genre to anything that we haven’t experienced in dozens of other games. Even the stealth portions of the game seem a bit strained with you having this sonar/light combo that will indicate when danger (i.e. shark) is near, but by using it you are also revealing your location with the light, so you end up inching around toggling the sonar to see if its red/yellow/green ready to shut it down the moment danger is near then cower in the nearest safe zone until you can repeat the process. It was moderately entertaining the first few times but quickly wears thin even before the prologue concludes.

You’ll be playing as Jack Ballard, a Coast Guard paramedic sent to the research station after receiving a distress call. Your chopper crashes during landing leaving you to solve the mystery of what actually happened. Submersed is your classic first-person adventure that looks and plays a lot like Resident Evil 7 – you even have your health status on your wrist. The atmosphere is suitably claustrophobic and tension-filled throughout; especially in those moments where you need to put on your diving suit and explore outside the station. There is a lot of instant death outside the lab, and the shark can even get inside and attack from waist-deep water, but in these instances you can repel the shark with a stun stick that electrifies the water and drives the shark back for a few moments so you can escape. Don’t ask why electrified water doesn’t hurt you. 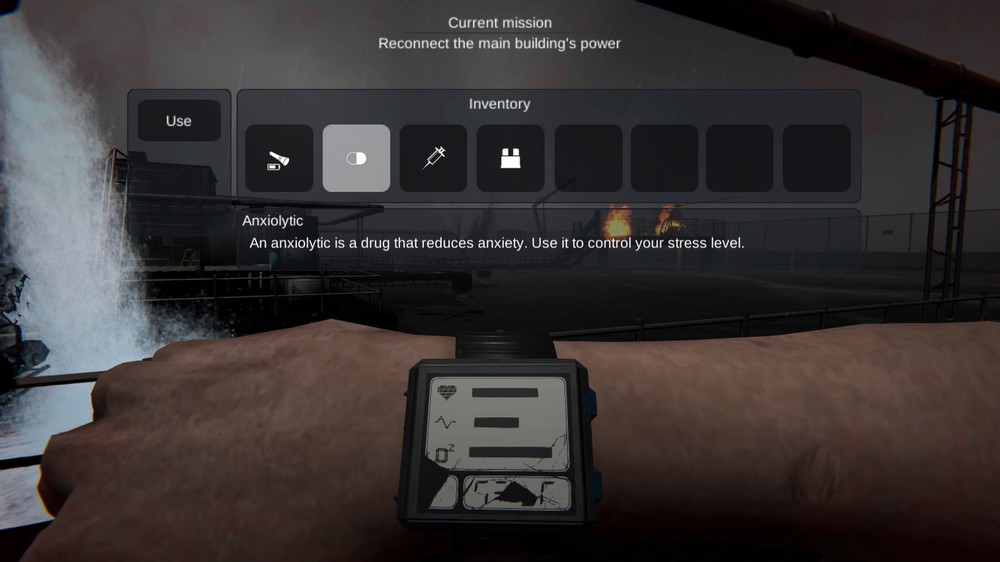 One of the more annoying aspects of the game is the inventory system that seems to date back to the original Resident Evil. You have eight slots to carry eight items and later you will find a storage box that holds another eight items that can be magically accessed from any other storage box in the facility.   The interface for swapping items between your personal inventory and the storage box is needlessly awkward as is the interface for combining/crafting items such as a lock pick. Some items critical to the game cannot be moved to the storage box or even discarded after their intended use, which means they are taking up valuable space forcing you to make some tough and illogical decisions near the end of the game. I thought struggling with inventory restrictions was long behind us.

The graphics are merely average and often too dark to appreciate any details. There doesn’t appear to be any native 4K or HDR support; not that this art style requires or would benefit from it. Even after adjusting the brightness I still had to play the game at night with the lights off to navigate the darker portions of the underwater lab. The audio was a bit random too with some below-average voice acting and odd music choices. Instead of something sinister like the Jaws theme the shark seems to come with his own heavy metal soundtrack. The sound effects were actually quite good and added to the tension. There are also several quality issues with all of the reading material in the game; numerous spelling and grammar issues. I understand this was created by a small Spanish indie team but surely Sony has some oversight into what goes on their store. I’m sure this could be patched in a future update if anyone cares to do so. 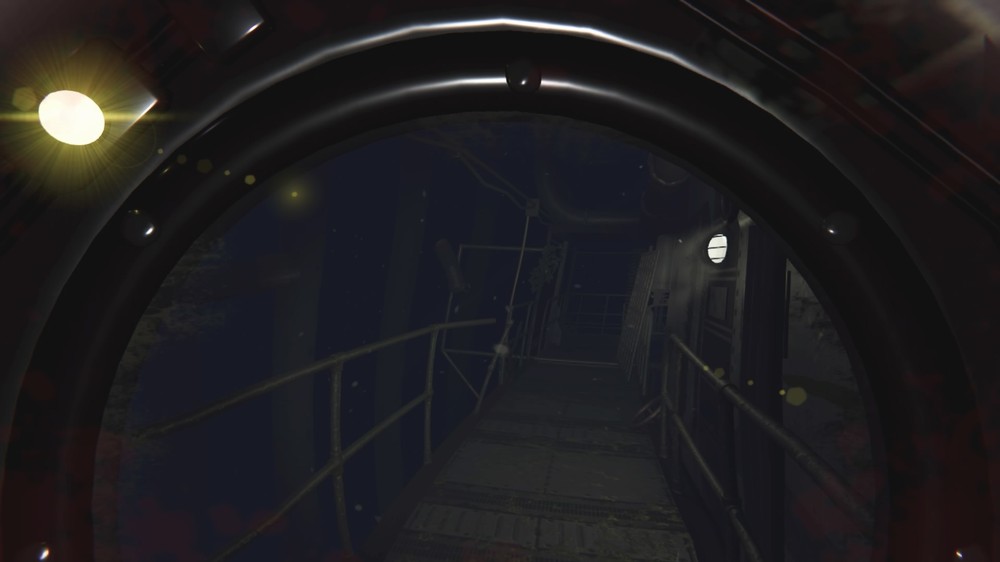 I don’t want to trash the game or complain about it too much, as I respect the effort these incubator studios represent. There are some moments of fun and even some tension and slight terror, but those are all quickly erased by the slow linear pacing of the adventure formula and the horrible inventory system. Perhaps if the game were compatible with PSVR; something clearly suitable for this genre and style of gameplay, it would find a cult following with VR gamers.  Submersed quickly became a chore to play with the results not nearly being worth the effort to attain them. Budget gamers will appreciate the $15 price, but the game is only four hours at best and you’ll only enjoy yourself about half that time. Maybe check this out if it goes on sale or becomes a PS Plus freebie, but otherwise; there are a lot better spooky games out there for the same or less money. Try one of those.

1
1112
The Walking Dead: Saints & Sinners Review – Oculus Quest
2
937
Join the Galaxy’s Finest as Star Wars™: Squadrons Soars Into Homes Today
3
937
Worm Jazz Review – PC
4
937
Take to the Skies and Choose a Side in the New Trailer for Next Generation Air Com...
5
937
CRASH BANDICOOT 4: IT’S ABOUT TIME IS AVAILABLE NOW
6
936
Frictional Games Shows Off First Gameplay Footage of Amnesia: Rebirth
7
936
The Falconeer First-Look Preview – PC
8
936
Metamorphosis is 33% Off on Steam!
9
936
Werewolf: The Apocalypse – Heart of the Forest launches on October the 13th
10
936
Synth Riders Celebrates Anniversary with a Month Full of Treats and an Oculus Ques...
All Original Content on Game Chronicles is Copyright (c) 2002-2020
Sinjin Solves Walkthroughs Copyright (c) 1996-2020 by Mark Smith