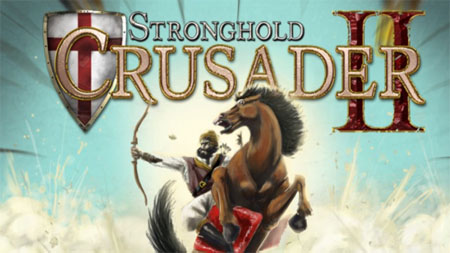 A game that offers a lot of enjoyment to the right people.

There’s always something about the Real Time Strategy genre that keeps drawing in every time. This is surprising due to the fact that I’m not really good at them. I’ve played everything from StarCraft to Age of Mythology and C&C over the years including the ultimate in castle building, the Stronghold franchise. I mean what’s cooler than castles. Well building them of course and with the release of Stronghold Crusader 2 you can do just that.

It’s been 12 years since I last played a Stronghold title with the release of the original Crusaders which I really enjoyed for its historical single-player campaigns through the Crusades. As someone that doesn’t play these kinds of games online very often, Crusaders’ mainly single-player experience was perfect at the time. Crusader 2 still offers the same great yet upgraded gameplay as the original though it shifts its focus on the more online multiplayer scene that the gaming world has been migrating to over the last few years.

The story this time around you will fight with or against the brutish might of Richard the Lionheart or the strategically defensive Saladin during the Crusades. Players can choose to hope right into the learning campaigns to get a feel on how Crusader 2 functions before heading onto the multiplayer. There are 11 scenarios across 3 campaigns and for those that pre-ordered Stronghold Crusader 2 you get both the Delivering Justice and Freedom Fighters that add another four scenarios for those that are more single player oriented. 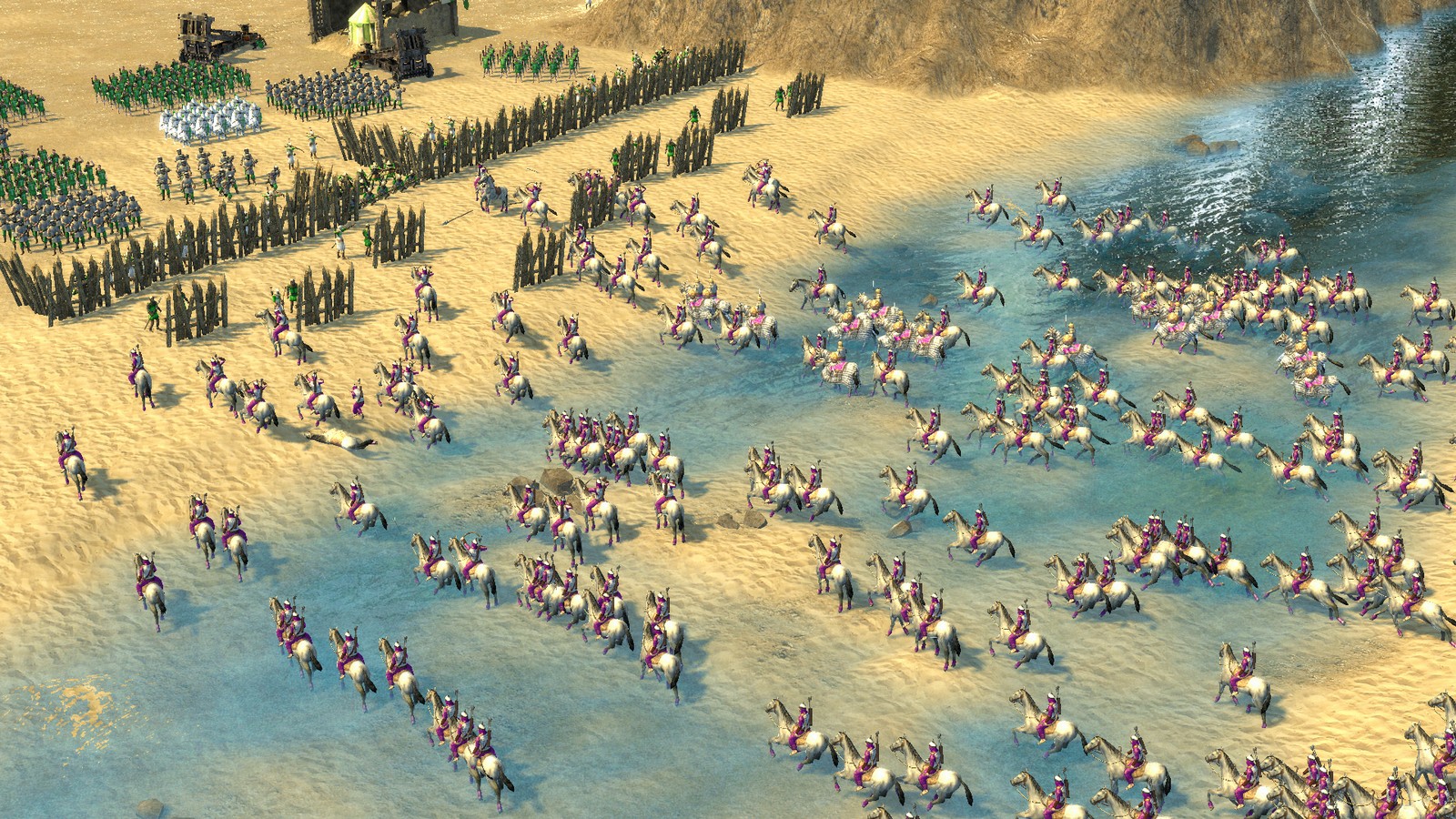 Before you head online its key to learn and master each of the 25 plus units that make up your forces. Each units has its own special abilities like the trebuchet which normally launches projectiles at areas of the map farther than other catapults. It also has the special ability to launch lions, donkeys, cows, or a sack of camel heads (really!) at enemy forces or fortresses. While being completely random, launching diseased animals into actually serves a tactical advantage for the one that launched it. It spread disease into the enemy’s population weakening them unless they have an apothecary to cure it.

Its tactics like these that you need to learn when heading into the online multiplayer. While you can try all those tactics in the campaign it’s best to try them in Skirmish where you can put yourself up against any AI opponent on any of the maps available. I’ve had some interesting fights involving assassins and Templars because…well who doesn’t like that combination.

Stronghold Crusader 2 much like the gaming world is more oriented to multiplayer this time around and is actually pretty fun even though my win count isn’t even close to being where I would like it to be. Players can join with 7 other players in multiplayer modes like Team Deathmatch but one of my favorite things is the ability to do is engage in Co-op play. What this does is allow two people to control one castle and focus on two different aspects of the fight. One can focus on the military side for instance while the other maintains the economical side which is really cool. 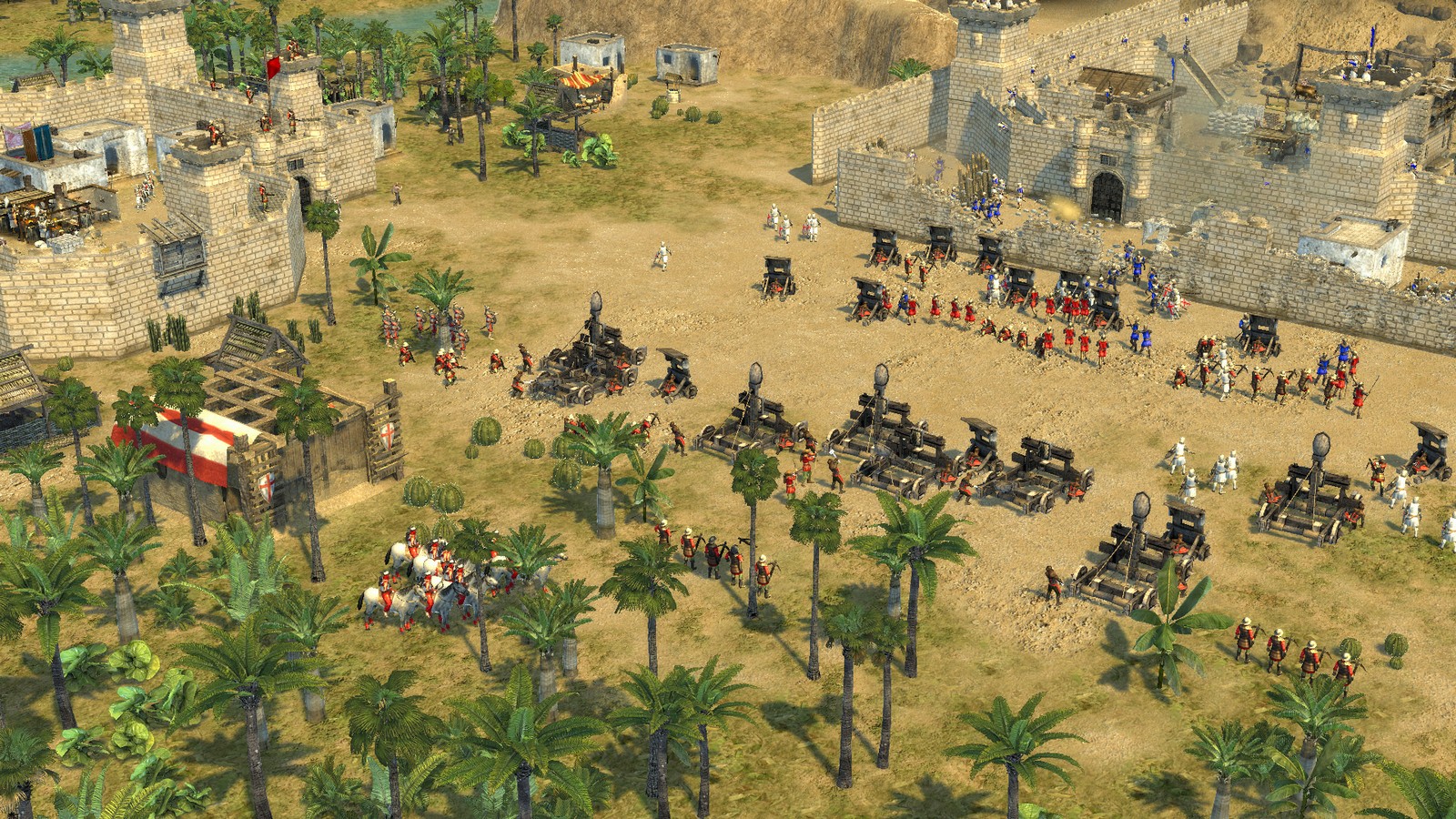 There are other nice features that Stronghold Crusader 2 has to offer PC gamers this time around like the support for the Steam Workshop. Players can already create their own maps or download those of other players in the community but with the added support of the Steam Workshop players can discover new missions and maps like never before including fan recreations of original Crusader maps. Personally I dug right into the Sandbox mode that allows you to create your own castle with as much gold and resources as you can manage. If you want you can enable environmental elements or enemy events but that is solely up to you.

No matter if you take Crusader 2 online or just play the single player campaign and skirmishes you’re in for a chunk of nostalgia but with a big visual advancement thanks to an all-new 3D engine and the use of Havok Physics. While the opening video (and manual) doesn’t exactly inspire particularly good thoughts of what to expect during actual gameplay, Stronghold Crusader 2 does actually feature strong graphics for an RTS of this type. The environments and animations however are enjoyable and the visual damage when you bust through and enemies wall defenses is quite satisfying especially in particularly troublesome battles. The sound effects are decent though the music totally fits the Middle Eastern setting. As an added bonus to Stronghold Crusader 2 special edition owners you actually get the 26 track soundtrack to listen to outside of the game. 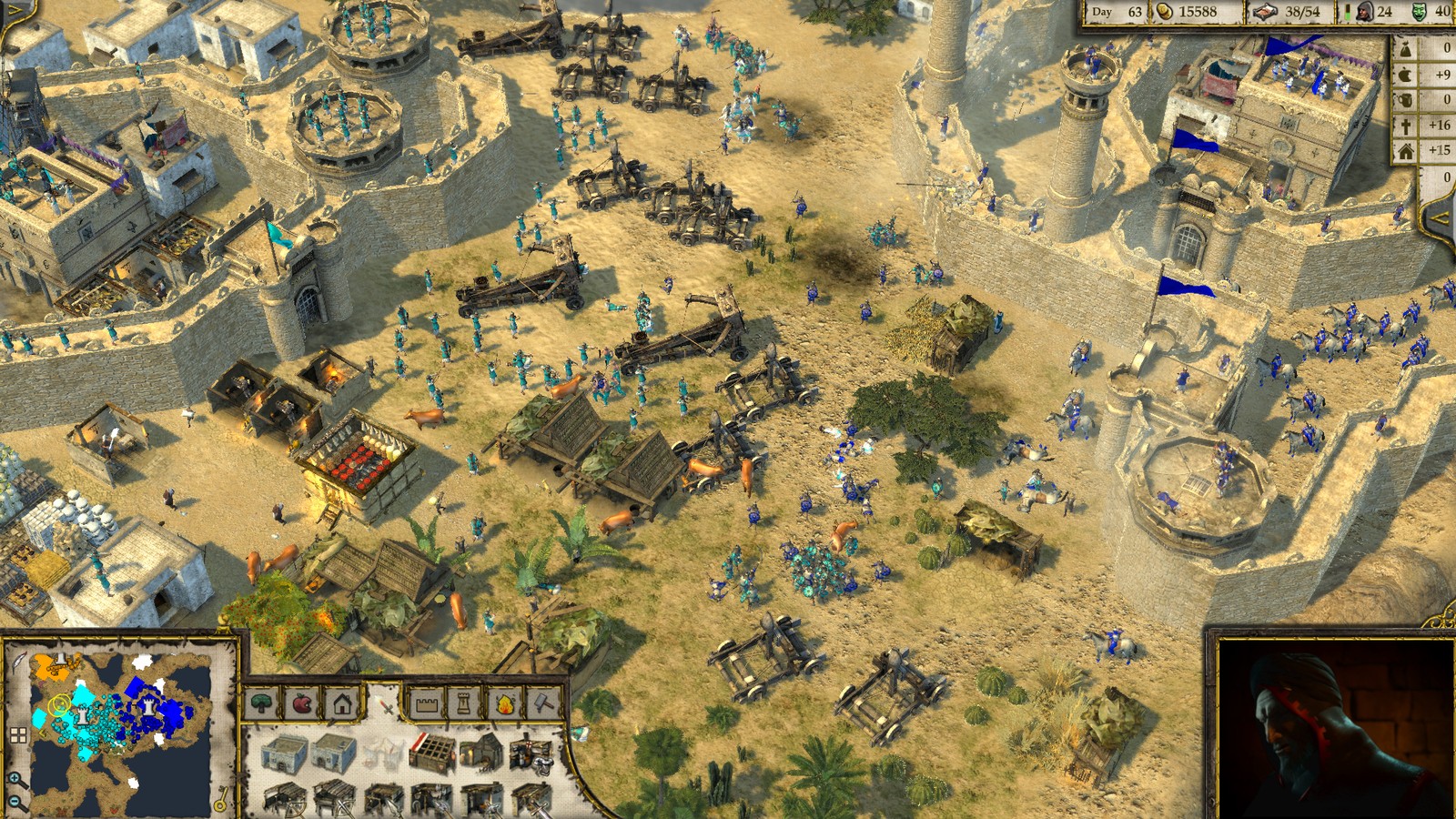 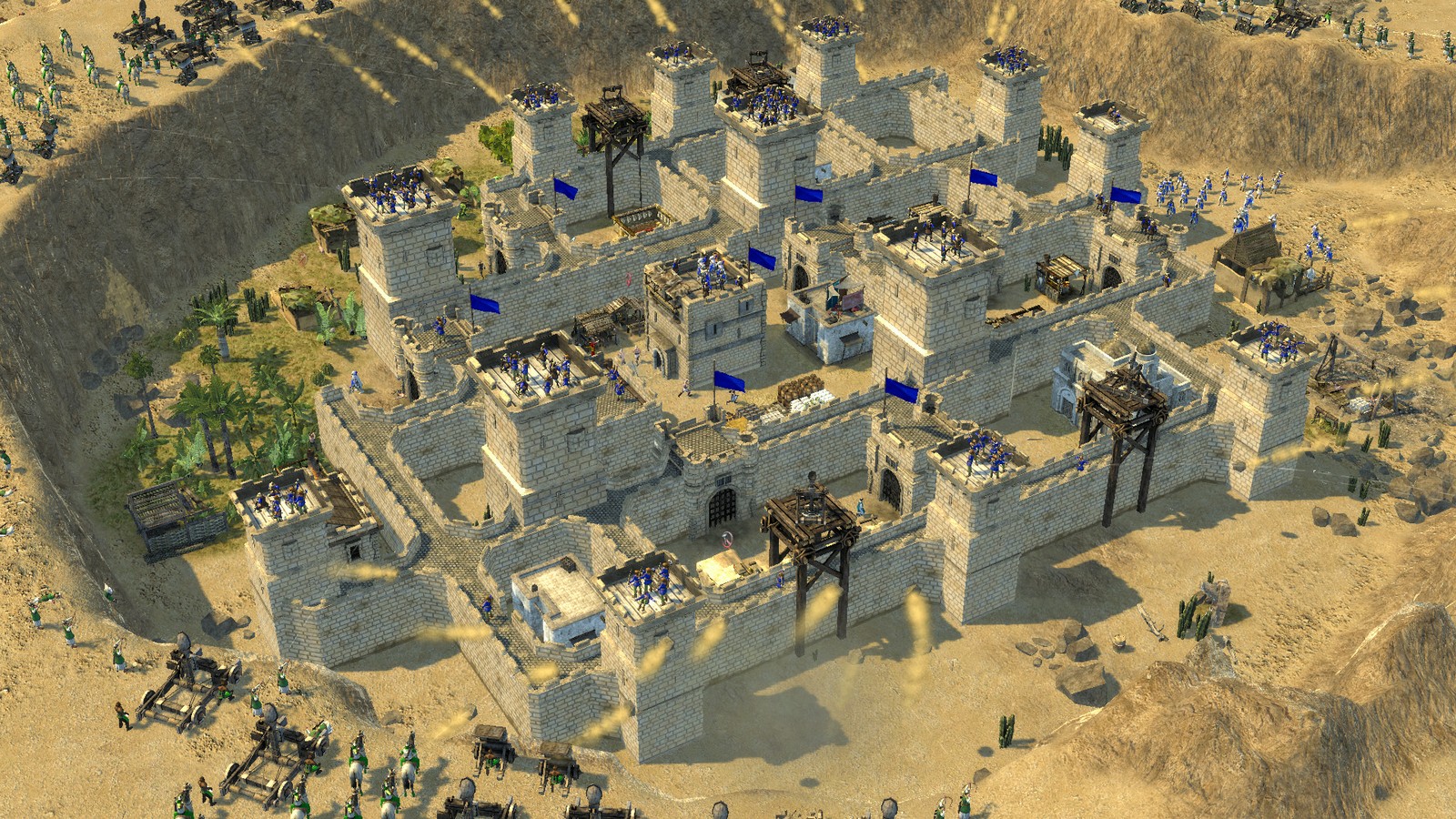 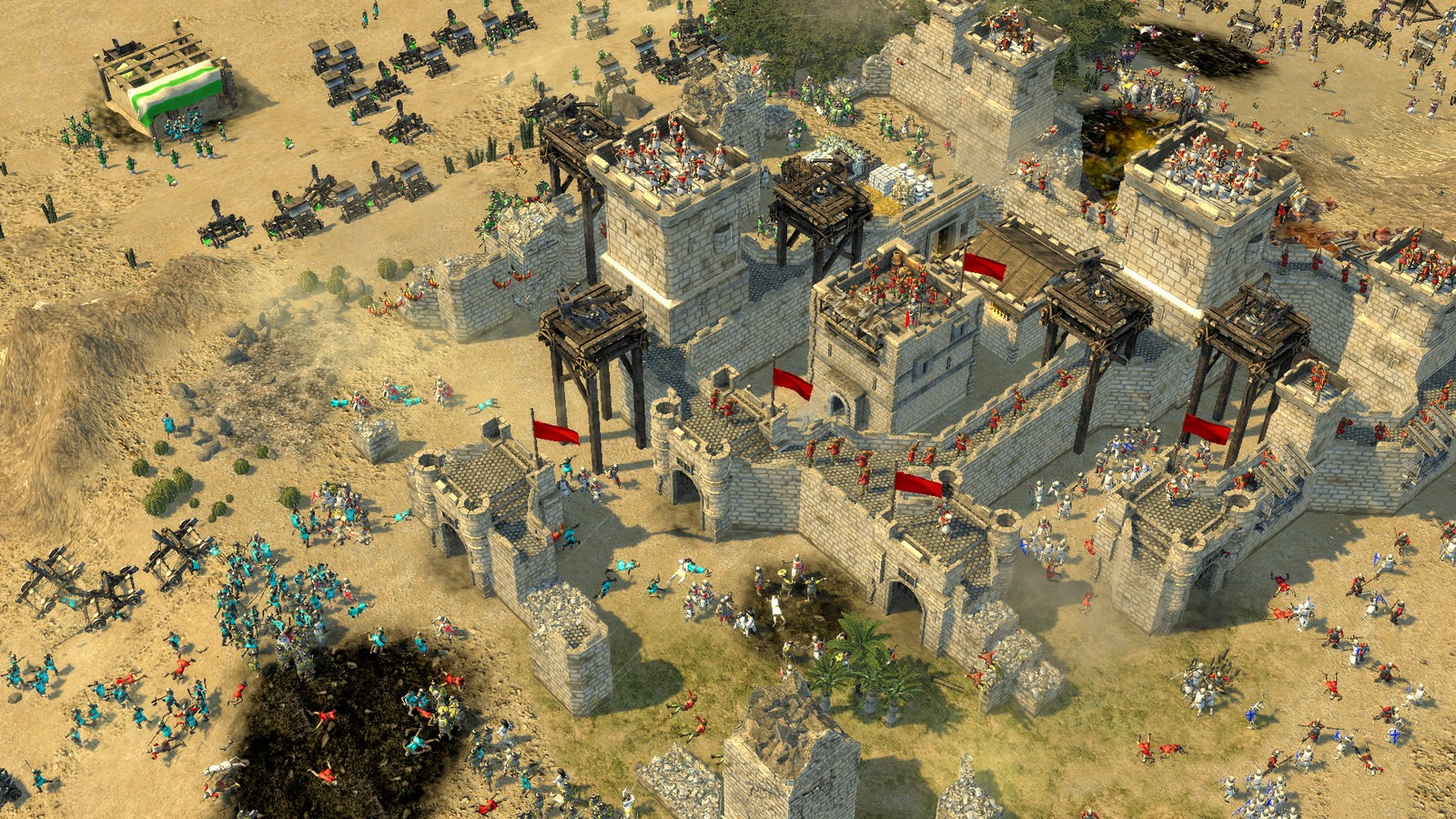 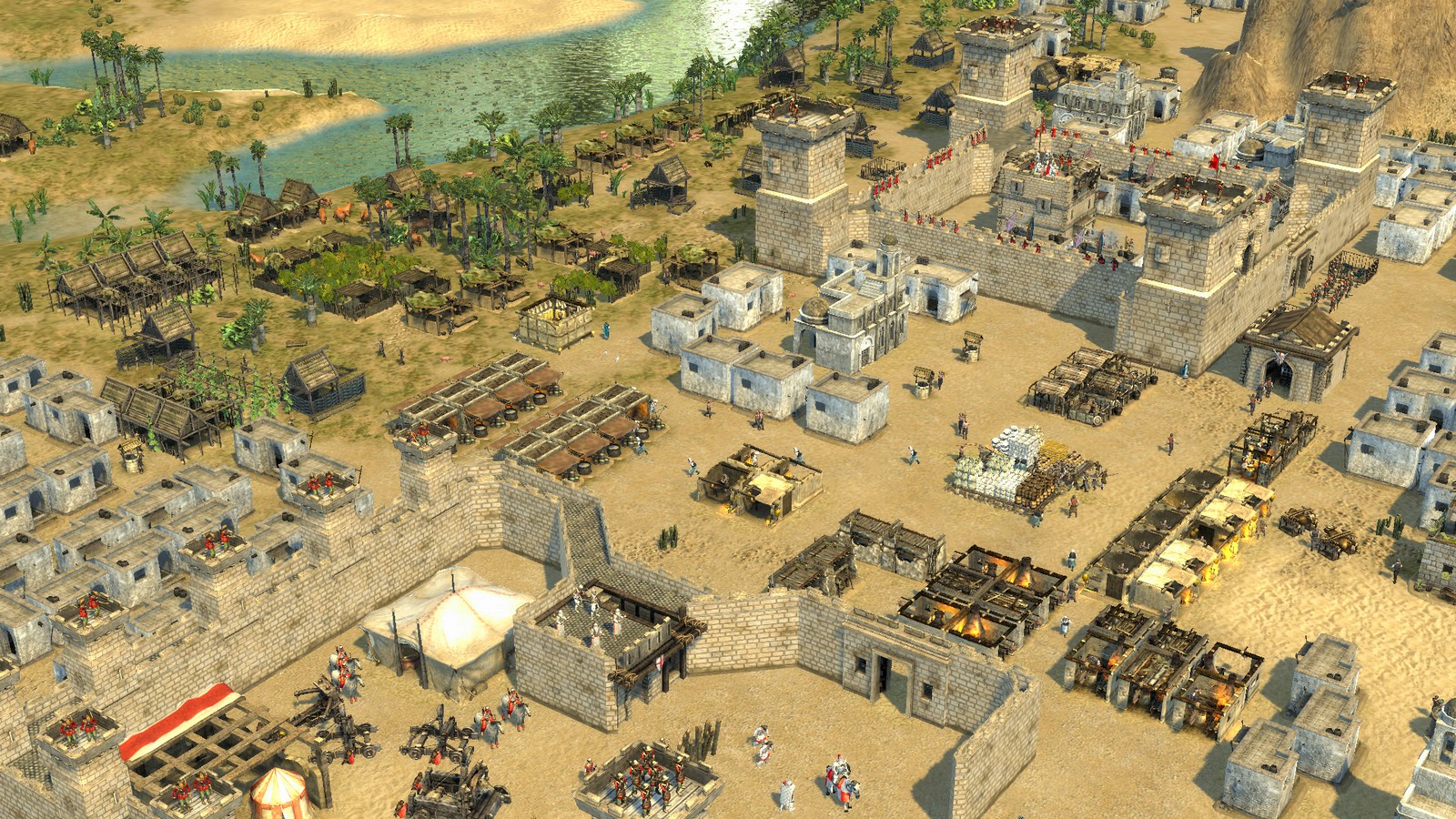 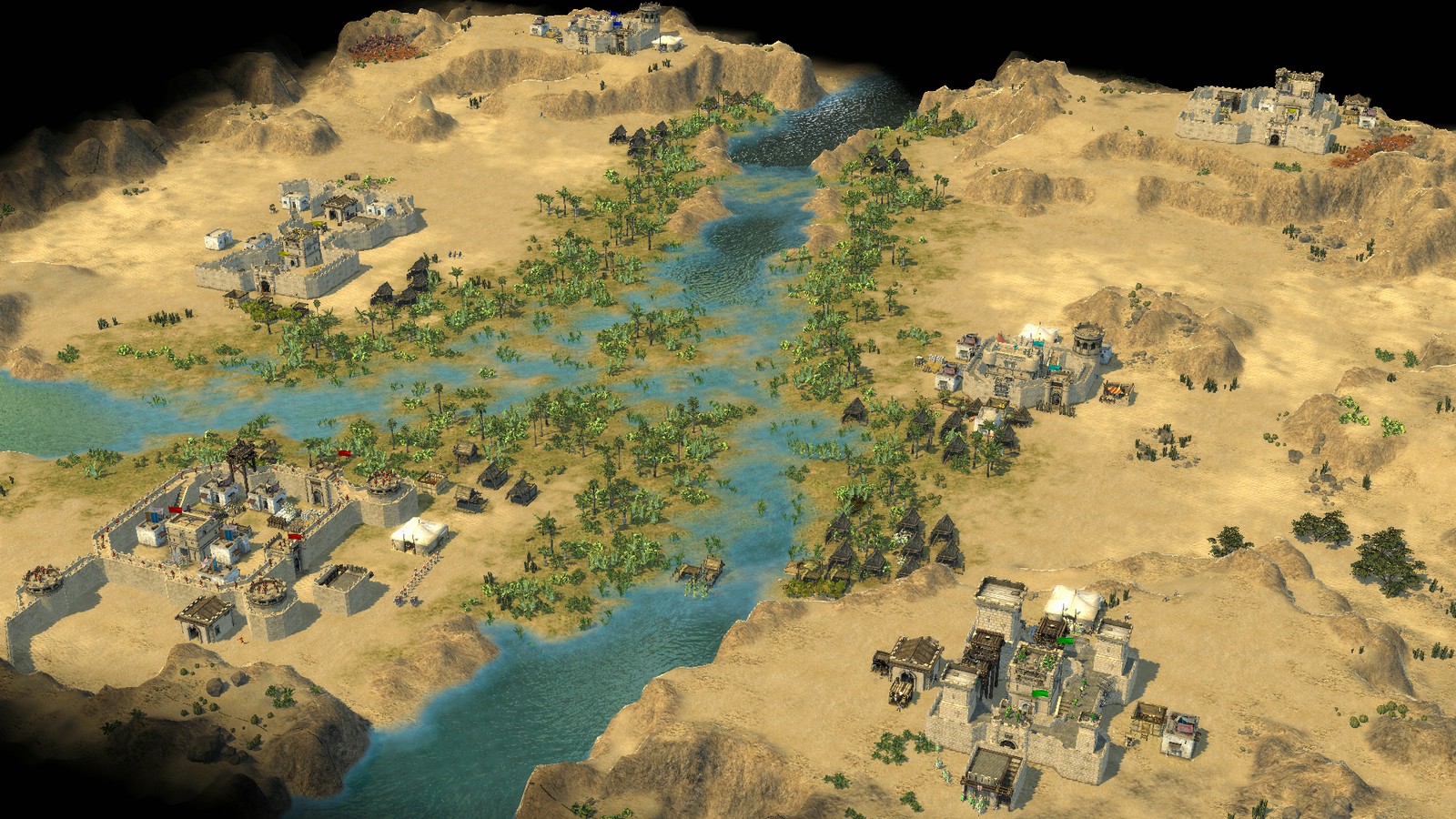 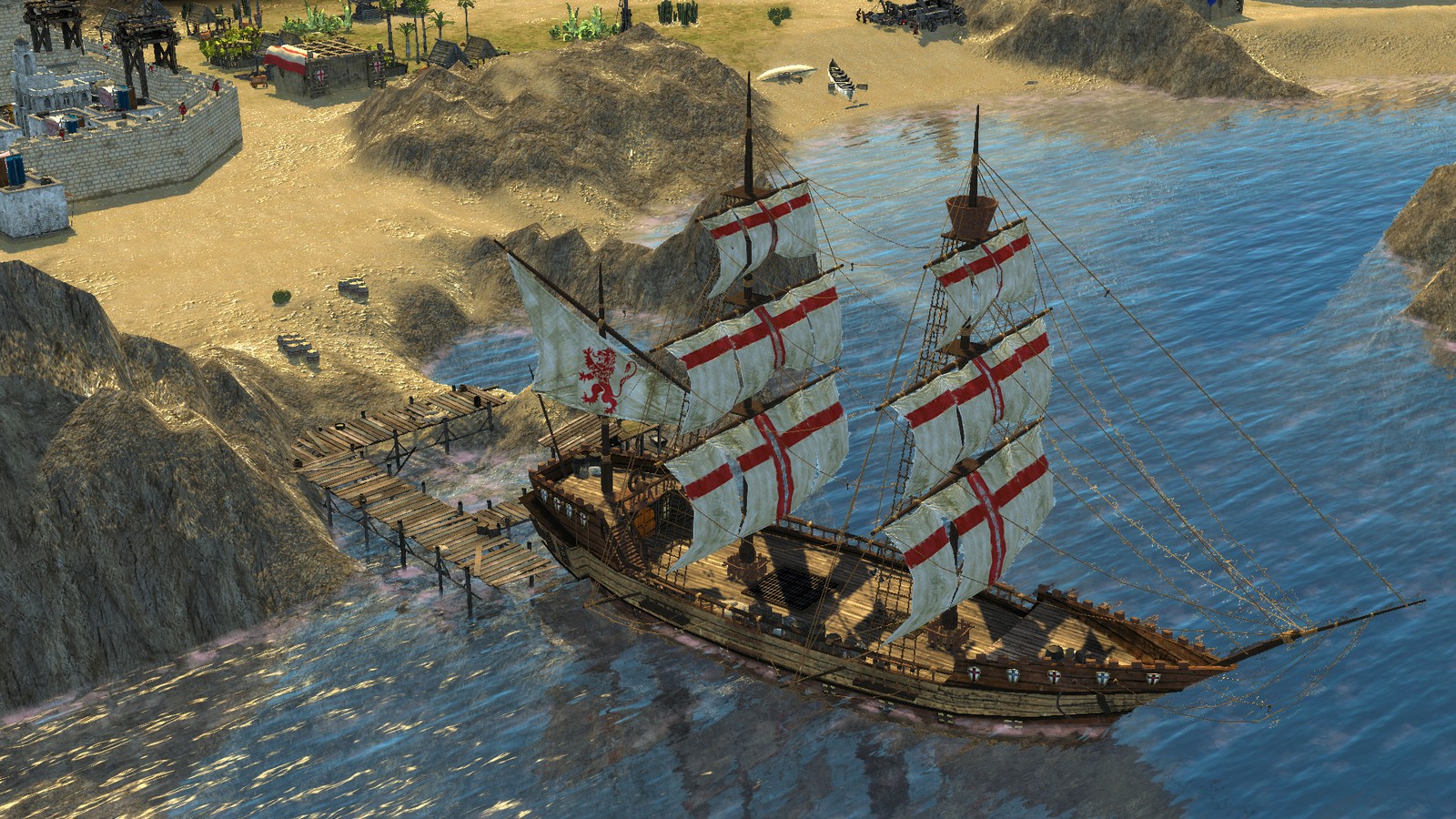 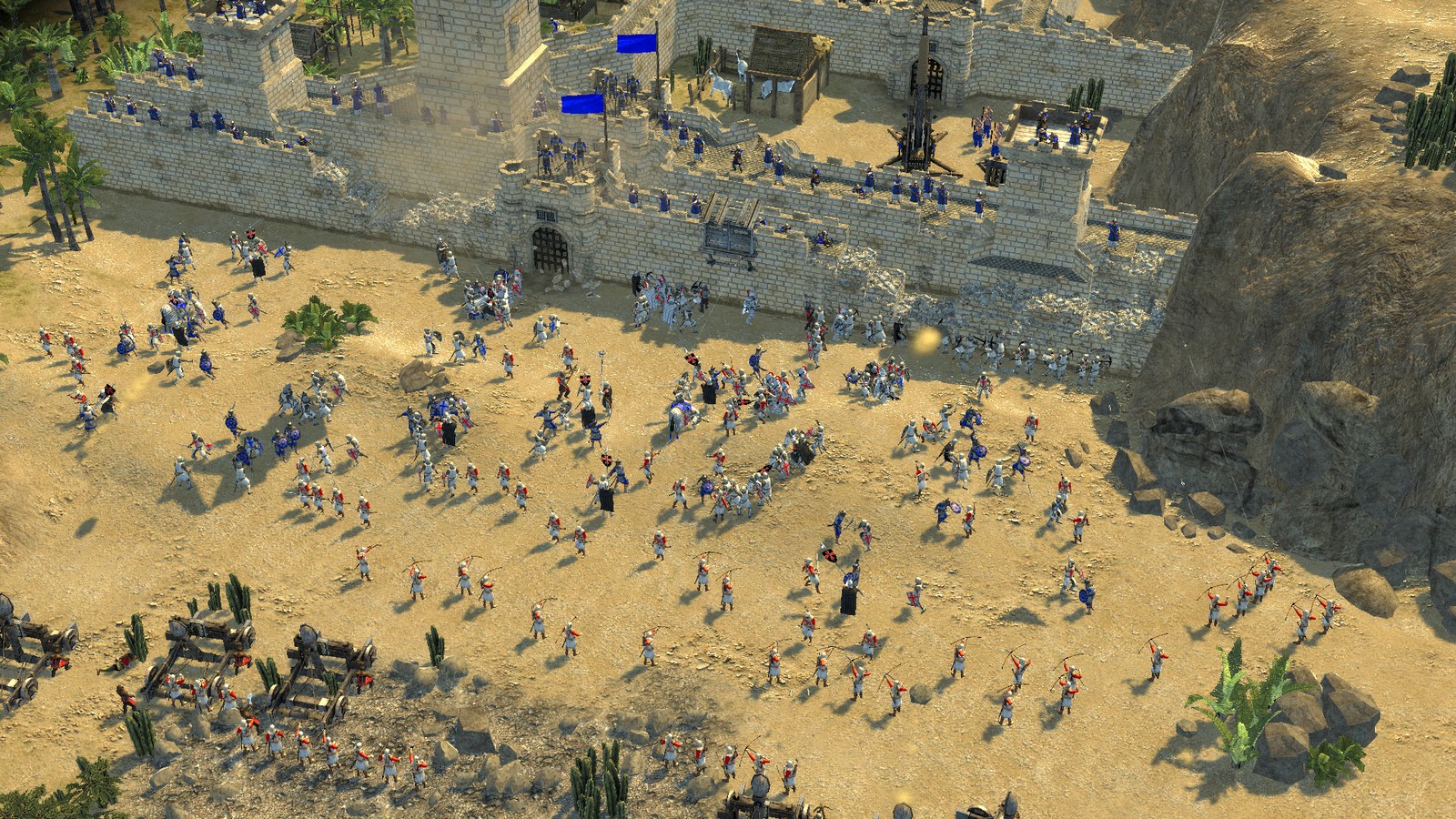 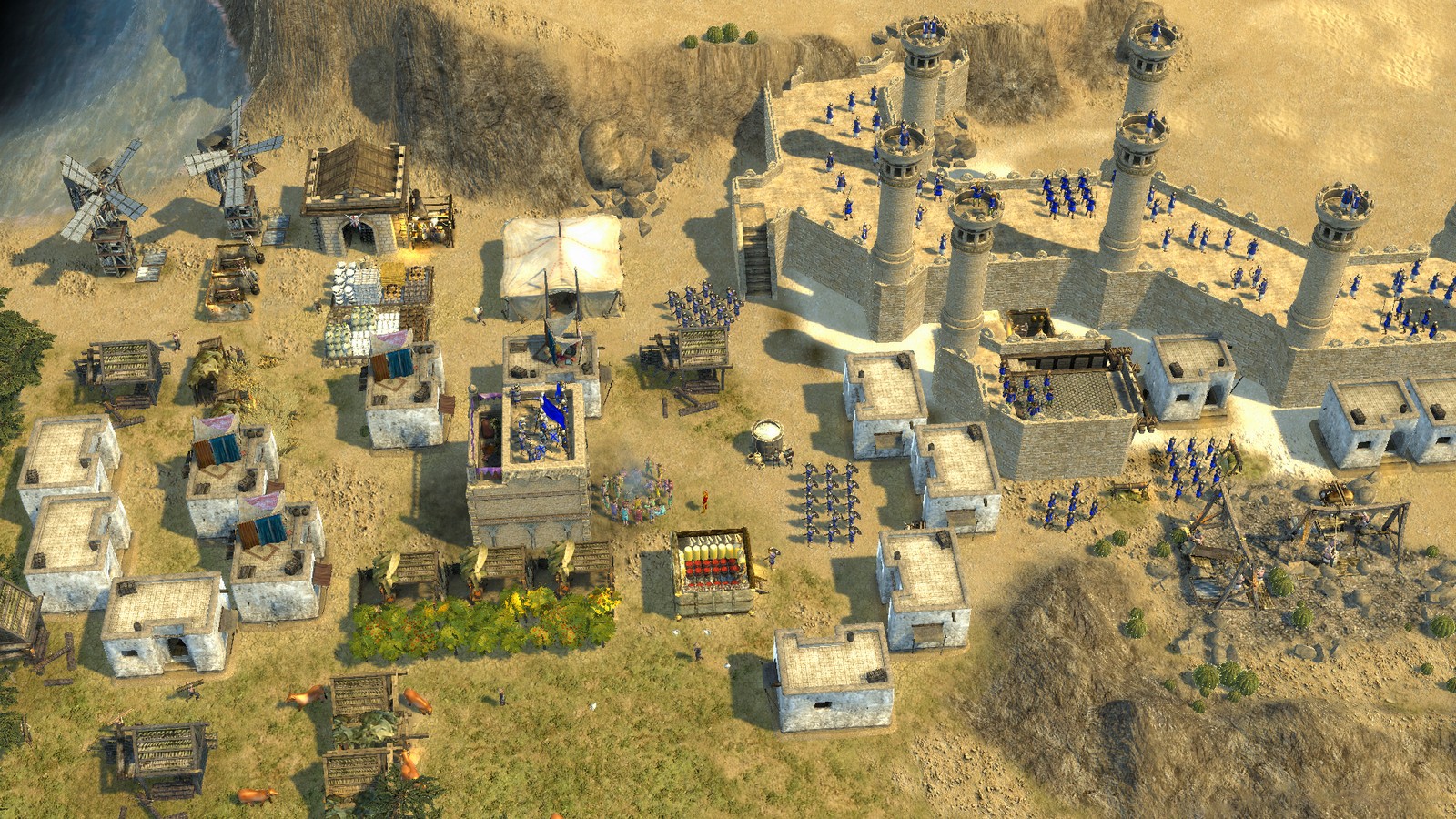 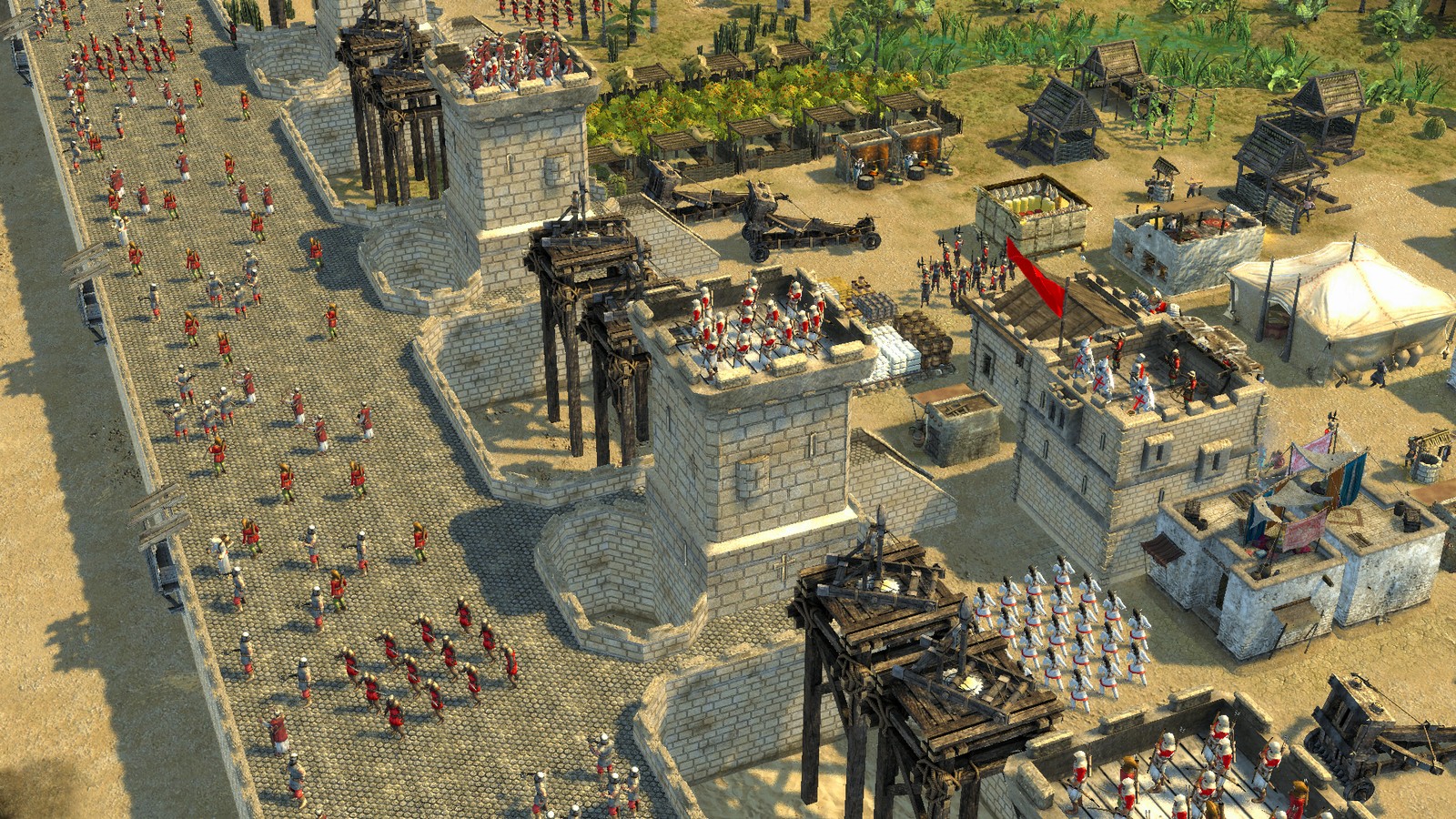 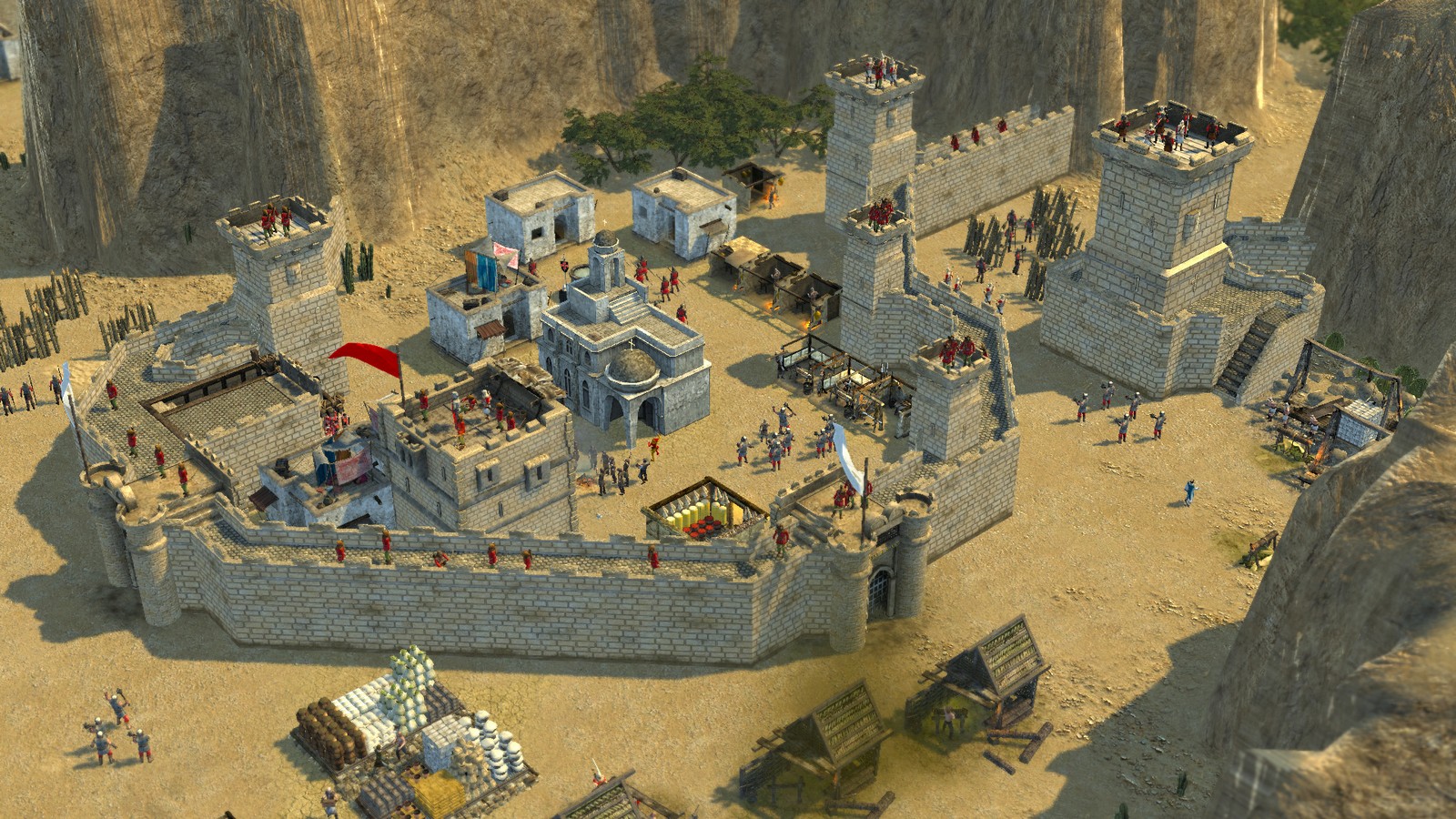