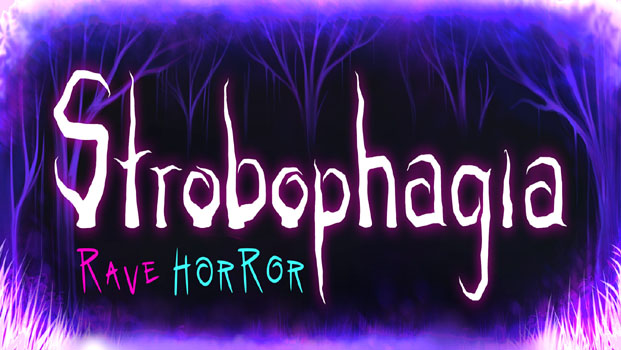 I had no idea what to expect when I started Strobophagia, but I did have a few ideas about what I wanted from the game that looked to promise Blair Witch horror infused with a potentially satanic music festival taking place in a sinister woods.  Sadly, what I got was a fairly convoluted and boring experience that offered some interesting visuals, NO MUSIC, and no real reason to keep playing after the first hour, and even that hour was a slog.

The game supports 4K and actually defaulted to that resolution on my RTX2080ti card, so I left it alone…my first mistake as the UI doesn’t scale properly so the opening paragraph that sets up the game was too small to read – even on my 85” screen, and it also flashed off before I could stand and approach the TV for a closer look.  You start off in a dark purple mist with abstract silhouettes of trees and assorted music festival items like lights and speakers, as you keep trying to walk into the light.

After stumbling around a bit you arrive at the main event and find yourself in line with a whole group of ravers dressed in what looks to be black body stockings and masks with all sorts of funky designs and patterns painted in neon paint for some truly impressive visuals.  You’ll need to grab a free cell phone to participate in the event, which basically has you finding and logging into five scattered Wi-Fi hotspots and talking to key NPC’s, taking pictures, and posting to social media.  You can navigate the smartphone with the D-pad, browsing messages and the occasional hint.

The game is not very forthcoming in how to play or even what you are supposed to be doing.  The signal strength meter used to find each router is rather cryptic, and you’re never instructed on how to read messages. For the first hour I mostly wandered around trying to do anything I could.  I smacked a few people and pissed them off to where they pursued me and knocked me down.   I cut into the Free Beer line and checked out the portable toilets, smashed some beer bottles, navigated a maze, and stumbled upon a satanic ritual that prematurely ended the party.

The game would have been a bit better if there had actually been some music at this rave.  Where was all that thumping EDM from the trailers?   Considering there is a soundtrack for the game launching in November maybe music will get added to the game at that point.  At one point I was able to switch on a mixing board on the DJ stage, but the music was very faint. Throughout most of the game I only heard my footsteps, the beep of my phone and a few incidental sound effects. 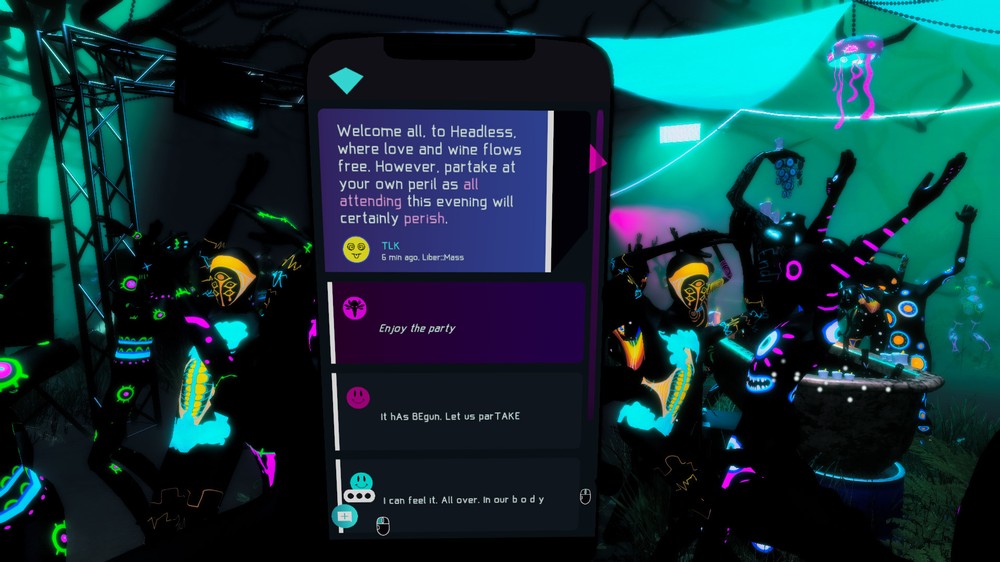 I’m just not sure what Strobophagia wants to be and perhaps the designers don’t either, and if they do they need to communicate their intentions a bit better.  Nothing is really scary about the game…sinister and creepy but not scary.  If there are puzzles or even objectives they are poorly presented.  I did enjoy the psychedelic artwork that sparked fond memories of walking into the black light room at Spencer’s Gifts.

I could possibly be more forgiving if this was being sold as Early Access, and considering the ongoing patches coming out I can’t help but think it is still in development yet rushed to Steam in time for Halloween relevance.  The game is totally lacking in motivation and so slowly paced you might doze off, but feel free to watch me stumble around this game for 48 minutes in my Halloween play through and decide for yourself.  Strobophagia | Rave Horror lacks the rave and the horror leaving you dazed and confused and slightly annoyed, like the cool kids tricked you into going into the woods for a party that doesn’t exist.  Who knows?  Maybe this game gets better after the first hour, but in a world where we have so many indie titles available to us, if you haven’t captured my interested in the first hour you probably just lost your chance.