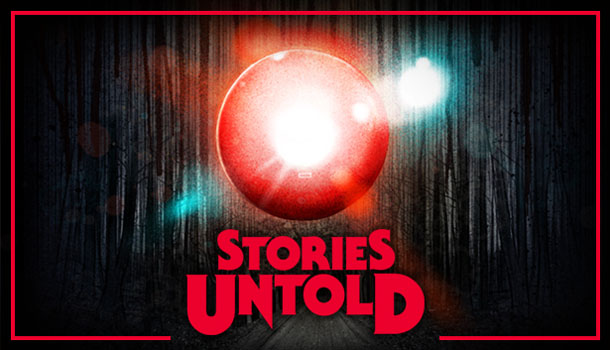 A fantastic collection of tragically unnerving ‘80’s aesthetic stories that blend together to create something greater than the sum its parts.

Stories Untold bleeds. It lives, it breathes, so therefore it must also bleed. This is exactly the kind of game that you want to go into blind, so I will try and write this review with as little in the way of spoilers as possible.  The first time I sat down to play Stories Untold, I was actually laying down in bed with my Switch and a pair of earbuds in my ears. It was perfectly dark in the room and I was ready. That’s what I thought.

A grand total of five minutes later, I had to put the Switch away for the evening and have a stiff drink so that I could put myself to sleep. It wasn’t so much that it was “scary” as it was unnerving. The sound design, combined with the vibration effect of the Switch, especially at one particular moment, was enough to put me over the edge.  But, I came back. I had to. This time, I came back a little more mentally prepared…in the daytime…and I turned the vibe function off in the game menu. Perhaps I am weak, but I had a review to write. 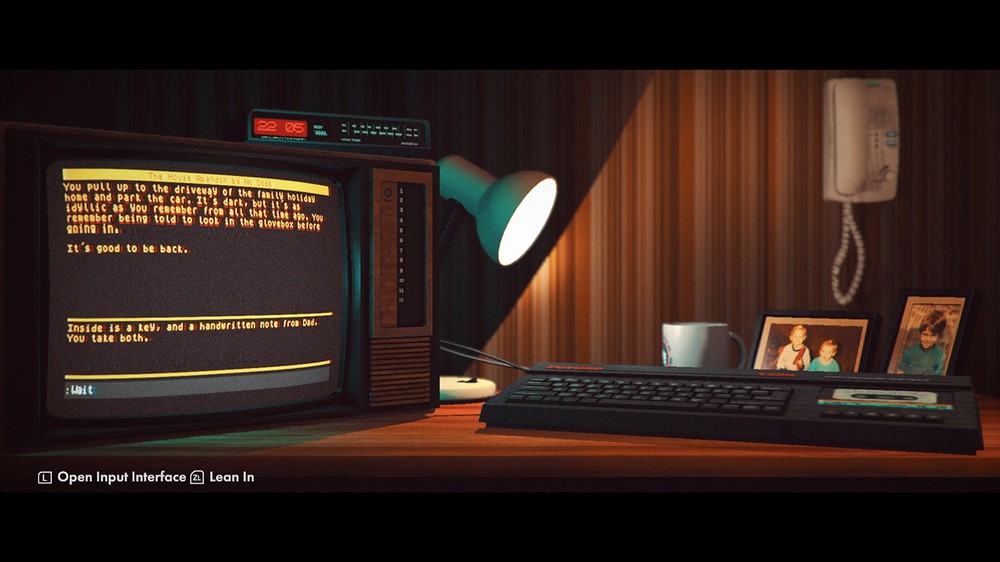 The game is broken into four distinct parts or chapters. At first, I thought they were four unrelated vignettes; scary short stories, each with a unifying interface mechanic. I was wrong. They are four distinct parts of a single story, and when you realize the link, in part four of the game, the crashing realization of what unites all of the otherwise seemingly very different scenarios is a true shock. But I won’t tell you what that is.

I will, however, talk more about the user interface, which I mentioned before. Each scenario boils down to you sitting in front of a technological device of some kind and interfacing with it in various ways. There is a wonderful mix of analog and digital devices; keyboards, radio dials, switches, toggles, buttons, and there is very little in the way of tutorial or direction. The game designers did the player the honor of assuming that we are not complete idiots and gave us just enough to allow us to figure the rest out ourselves. Coming from games that advertise as puzzle games but then spend agonizing amounts of time showing you exactly how the puzzles work ahead of time has become something of an annoyance with me. Not so with this one. Still, there were rarely any points where I felt like the challenge was too hard. There was one moment in particular that I was very close to being tempted to looking up a solution online; however I was able to figure it out through the use of a lot of scratch paper and trial and error. I would stress to anyone playing this that none of the puzzles are too hard to figure out without help and that the feeling of pride in yourself you will get for having done it all without assistance will be worth the patience required, especially during the third chapter. 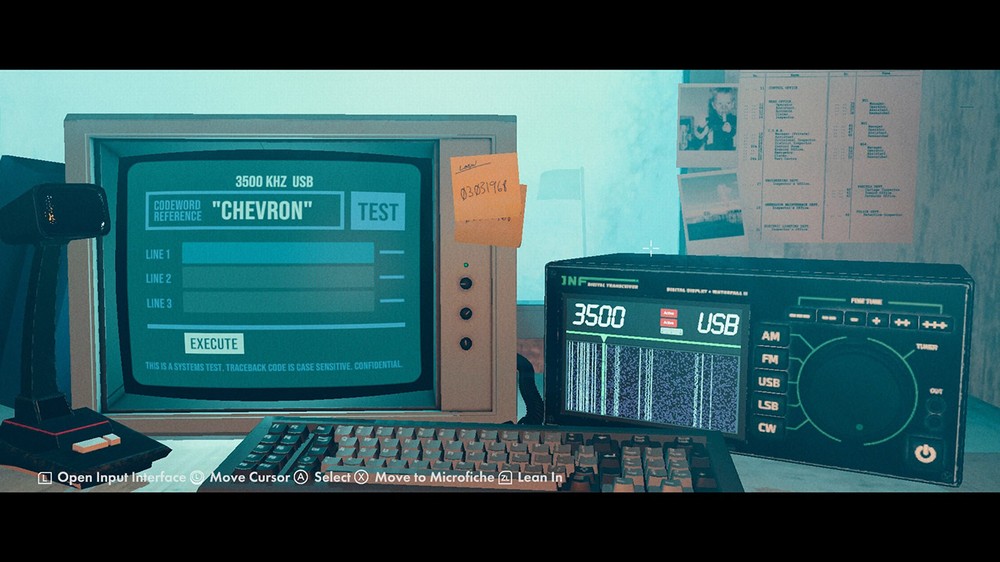 One aspect that sets this game firmly in the category of “great” games, is the sound design. The visual fidelity is really well done, but you are usually in a fairly fixed position, looking at a set of devices that you are interacting with in various ways, so the visuals can sometimes become almost like background static. The audio clues are what really key you in on the evolution of the scene. Simple things like the buzzing of a fluorescent light bulb or the hum of a computer fan or the crackle of static on a radio; all these things come together to create an acoustic atmosphere that is greater than the sum of its parts.

And that’s really the best description of the game as a whole. Each individual chapter, played on its own, would be enjoyable and interesting but wouldn’t strike nearly the same chord as the entirety of the story when it is all put together at the end. There was something pleasantly resonant and impactful about the game as a whole. When you finish it, you can’t help but feel like you got punched in the gut, but in a good way…right? 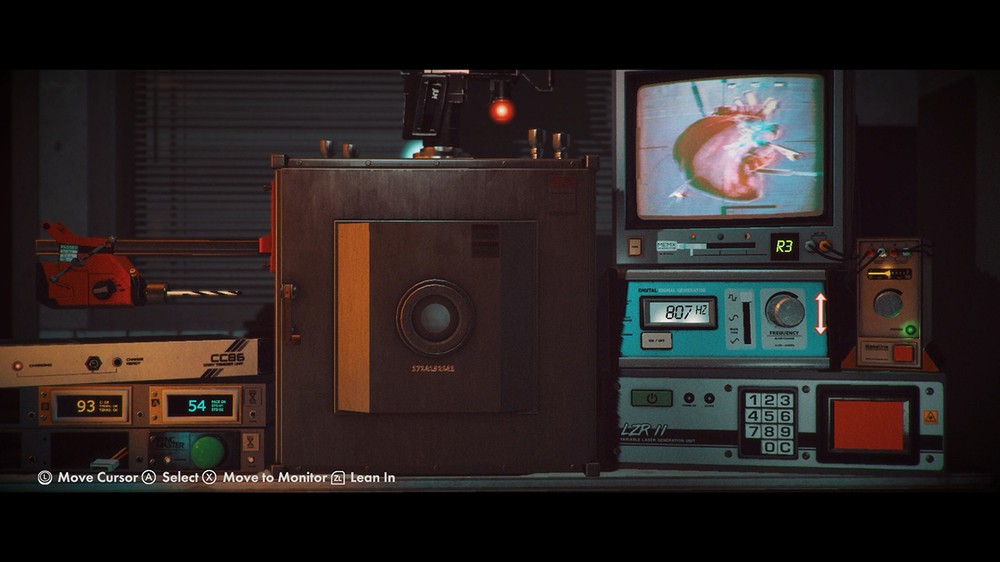 Another aspect of the game’s overall design that really made it hum for me was the ‘80’s aesthetic. Riding that same nostalgic wave as Stranger Things, anyone playing this that was alive during that time will be awash with very visceral memories brought back by the sights and sounds of this game. Everything feels so authentically ‘80’s that there is not a single moment in the game that takes you out of that deep, full immersion.

Untold Stories is admittedly short, especially that first chapter, and due to the nature of this game there is very little replay value. Once you’ve gone through it I can’t really see a reason to want to play through it again since you’d already know the twists and turns of the story. But at least the publisher recognizes this, as evident with the $9.99 price. And eventually, much like any good movie you may just want to experience it again, although each successive time will never be as good as the first. I wished that Untold Stories would have been slightly longer so that I could have lived in that world a little bit longer. But that just tells you how good the game is. Maybe making it longer would have only ruined the overall pacing of the game. Overall, I think the game took me around three hours to complete. It’s a great game, regardless of length, and I wouldn’t pass this one up at all.