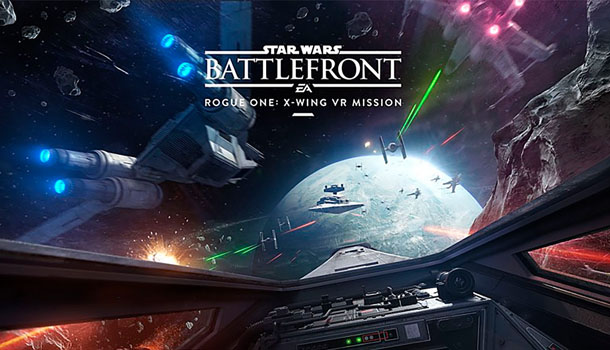 This is the VR experience you've been looking for.

Just in time to suckle on the media hype of the Rogue One movie, EA launches Star Wars Battlefront Rogue One: VR Mission; some free DLC for those who already own the core game on the PS4.  While I appreciate the fact that the DLC is free I was more than slightly annoyed that they didn’t release this as a standalone experience – you know, the same way Call of Duty released their Jackal Assault VR experience last month.

I’m a big fan of the Star Wars Battlefront game, only I chose to play on the PC, so for me to play this FREE 15-minute VR demo I had to purchase a PS4 copy of the game.  Thankfully, Black Friday sales got me the Ultimate Edition for only $20, although after finishing the 15-minute linear demo I had to wonder if $20 was still too much for a chance to live out my dream as an X-Wing pilot.

The demo launches with the signature blinding-white title screen as a towering ATAT stomps by.  You are then taken to another sterile white screen with an X-Wing undergoing maintenance by an R2 unit where you are allowed to teleport from node to node to view the craft from various angles before eventually climbing into the cockpit and launching.

Once in space you’ll find controls are exactly like those from the main game, and despite every fiber of my being wanting to choose realistic flight controls, the arcade nature of even this VR sim had be inverting my controls to something I knew was wrong, but I just couldn’t fight.

The first half of the experience has you chasing around Rogue Leader, flying in formation with the fleet before warping into an asteroid field, and we all know the chances of successfully navigating one of those.  After a few more minutes of dodging rocks you’ll come across a transport with Princess…err…an unnamed female passenger that will need escorting back to the fleet, but as you exit the asteroids you are attacked by Tie Fighters and ultimately a Destroyer.

The last five minutes of the experience is where all of the action is, as you try to take out turrets on the destroyer and blast as many Tie Fighters from space as possible.  The demo has numerous objective-based goals for success like not dying, destroying 75 fighters, blasting all 8 turrets, and more.  It certainly gives you mild incentive to replay the mission, at least until you have checked off all the goals, but the demo is quite linear and the same dialogue and tutorial prompts play out each time you revisit.

Much like the Jackal Assault demo, Star Wars Battlefront Rogue One: VR Mission is a great look at the potential of VR and what we can come to expect from more fully fleshed out VR games.  I could easily see myself playing an entire X-Wing vs Tie Fighter remake in VR for hours on end.  The graphics and the audio totally captured the flavor of Star Wars and the power of the PS4 Pro created a smooth and comfortable experience with no hint of nausea.  It was a total blast viewing the galaxy from the claustrophobic confines of my detailed X-Wing cockpit, with fully interactive control panels and a few nifty Easter Eggs you can find before combat begins.

May the VR Force be with you…