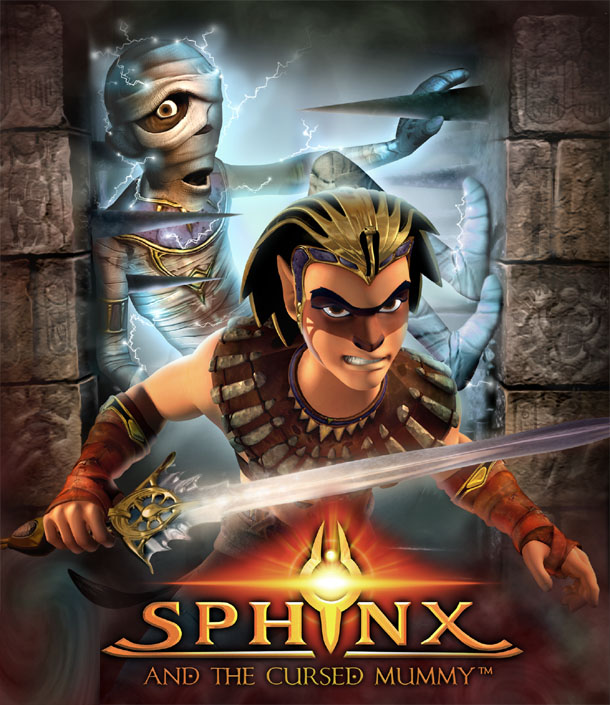 Manages to create its own unique genre niche with a style and class all its own.

Sphinx and the Cursed Mummy was one of the biggest sleeper hits of 2003 and now, 14 years to the day, THQ Nordic is bringing this classic back to the PC with enhanced graphics and charming retro gameplay. Originally designed by Eurocom, a proven developer with a substantial library of hits, Sphinx combines traditional platform action gameplay with a wonderful background story that sets the stage for some of the most ingenious levels that take us on a wild romp through ancient Egyptian mythology.

Buddy games are not uncommon to the platform genre but Sphinx does something interesting and introduces the two members of our team in solo adventures long before they ever join forces. We are first introduced to Sphinx, a half-man half-lion creature who has been quested to rid the world of evil; all in a day’s work for your average demigod. The game eases you in with a few opening levels that consist of some jumping puzzles and environmental interaction before the game shifts gears and characters and puts you in the royal robes of Tutankhamen. The gimmick here is that Tut is just a young boy and while snooping around the palace he uncovers a sinister and evil plot to overthrow the pharaoh and ends up captured and turned into a mummy. 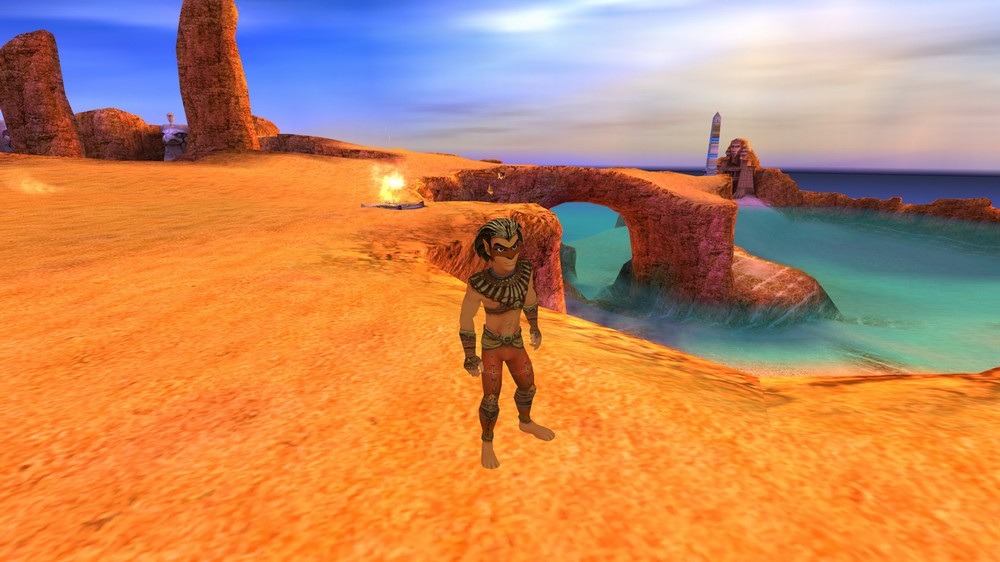 For the first part of the game we bounce back and forth between our two heroes until they are brought together by circumstance to fight the ultimate evil. Despite the epic nature of the plot the story is rather simple and so are the movies that appear between the various levels. It’s just enough story to keep you interested in the characters, but the quality gameplay is what will keep you coming back.

The game is classic action-adventure but the added elements of earned skills, gradual upgrades, returning to previous levels to explore newly accessible locales, is all platform stuff and it all works great in this game. You are gradually eased into the game and as you learn new skills the game design encourages you to use and master these abilities. You actually learn the game by playing it. 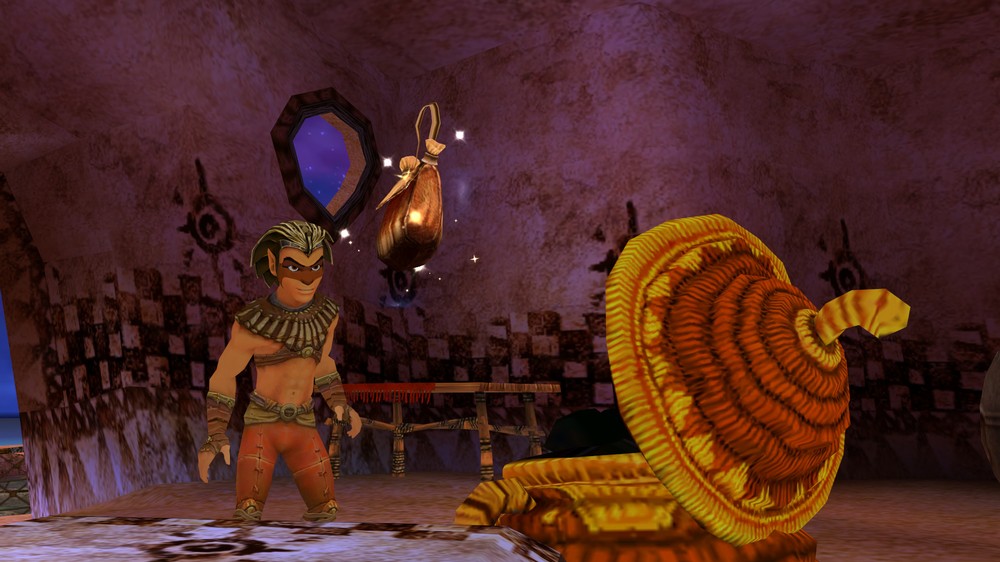 Our two characters are quite diverse in their skills, which creates two very unique types of gameplay. Sphinx is all about combat, running, jumping, and everything that is “action”. He can use a sword or fire darts from a blowgun. He climbs, has a double-jump, can use a shield, and even learn special powers and attacks. As he learns new abilities the enemies and the environment adapt to test those skills.

The Mummy is the direct opposite. He is rather weak and frail looking by design but since he is already dead he can take a real beating. He cannot use weapons, so he must rely on stealth to navigate levels. His levels are also more puzzle-driven. The Mummy can get flattened paper thin and slip through bars or catch on fire then run around trying to extinguish the flames. Catching on fire or getting shocked with 10,000 volts is not only fun to watch, but also an integral part of many puzzles, and figuring out how to keep the pain going for as long as you can is an ironic challenge. So while Sphinx is the man of action the Mummy is the “brains” of the duo. 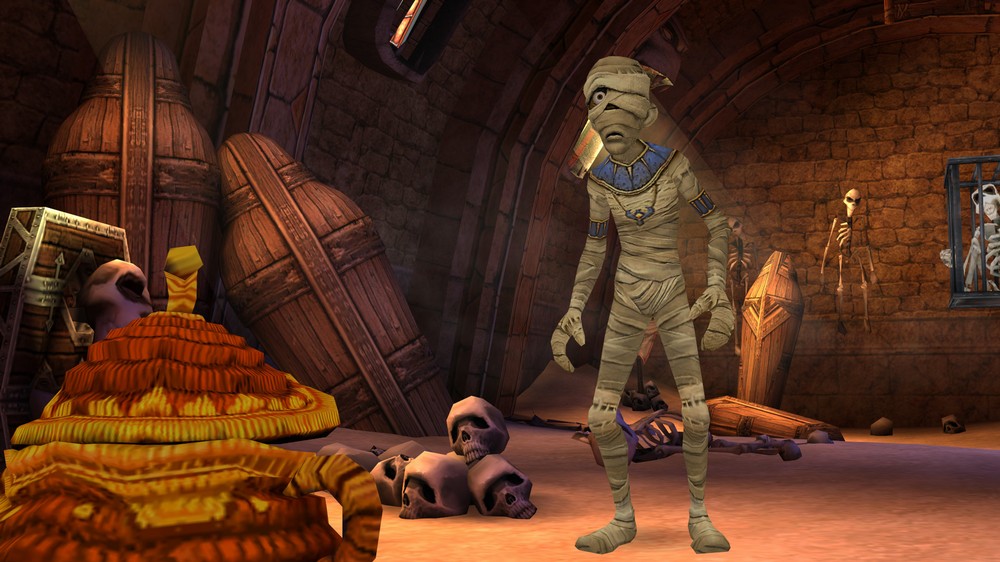 Sphinx and the Cursed Mummy supports a gamepad but I found the camera controls on the right stick to be overly sensitive with no option to adjust. You’ll need a really light touch to keep the camera under control so you don’t inadvertently run off a cliff or into a hazard. The movement is analog so you can control the precise speed of the character and the face buttons are context-sensitive to the gameplay so their functions vary based on your situation with text cues shown in the upper-right corner of the screen so you always know what button does what.

Combat is great fun thanks but now more than ever with the crazy camera I really would have liked a target lock to keep enemies in view and perhaps circle-strafe. The battles seemed rather two-dimensional but great fun nonetheless. Puzzles range from very simple to some very challenging brainteasers that may stump even more experienced gamers. Some are as simple as finding a key or a lever to open a door while others will have you manipulating pieces of the environment to redirect lava flow or light beams or stepping on lighted pads in a certain sequence to open a door. 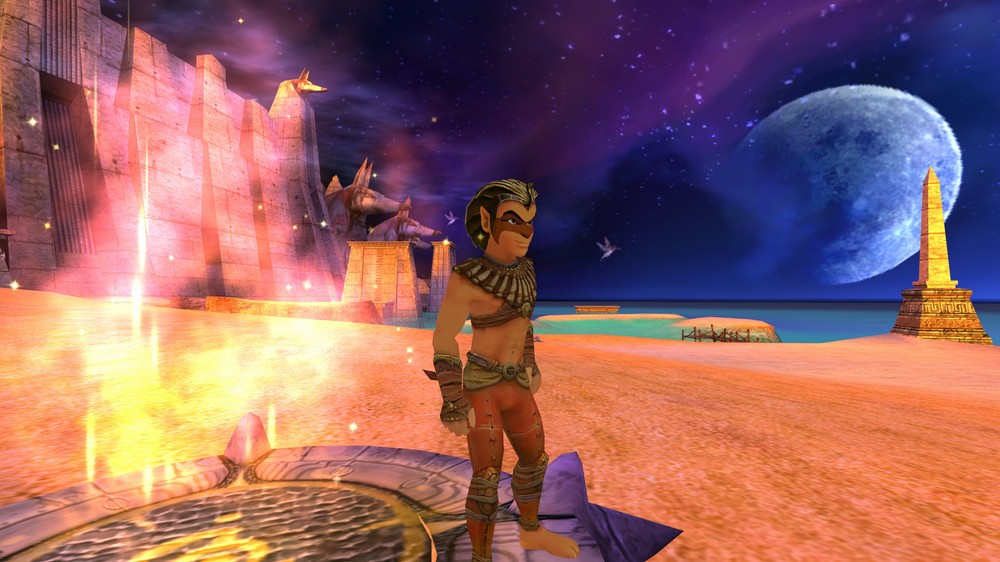 Sphinx was a good looking game in 2003 on the Xbox 360 when 720p was the graphical target. Now on PC, Sphinx has support for resolutions up to 4K, but given the original art assets the only thing improved is the aliasing and the framerate.   Sphinx easily hits 60fps at 4K with a draw distance to the horizon, and the textures only reveal their age in the extreme close-ups and cutscenes. Sphinx and the Cursed Mummy is a gorgeous adventure designed with rich saturated colors that give the game a fanciful, almost surreal look.  My only nitpicks with graphics are the lack of character shadows and some super-small subtitles that are too tiny, even on my 75” display. I thought it might be the 4K resolution, so I dropped it to 1080p, but the text stayed the same size.

The characters are always the stars in games like these and Sphinx and the Mummy just ooze personality, both in their creative design and their wonderful animation. There are nice subtle touches like Sphinx’s wagging tail or the Mummy’s tattered bindings. The Mummy is also the victim of plenty of cruel and admittedly funny punishments. Not since Voodoo Vince has a video game character suffered so much cartoon abuse. 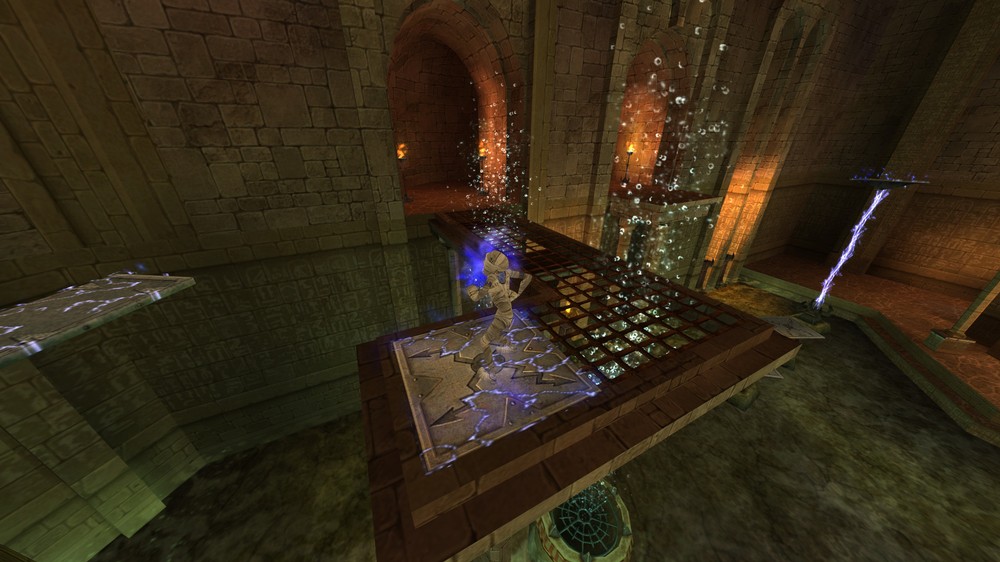 The sound package is a love-hate relationship. I love the authentic and stylized music that fits the theme of the game and adds greatly to the emotional impact of the gameplay. The soundtrack is even being sold separately. The sound effects are topnotch and even music is used as a sound effect during combat with Sphinx. Each time he swings his sword an “orchestra hit” plays and with each subsequent strike the pitch rises until you reach the finishing blow. It’s a tried and true animated trick that I have never seen (or heard) in a game before, but it steals the show.

The real killer is that there is no spoken dialogue in Sphinx and this is a travesty of epic proportions because not only do these characters ooze personality in their design and facial features, the dialogue is very well written and just cries out to be heard; especially in 2017. Of course I would have hated to hear this game poorly read, but the entire time I played this game I kept trying to fit popular voice actors with the characters. The surround mix is masterfully executed with sound effects all come from the proper direction while the environmental effects, wind, birds, water, crackling flames, grinding stone, all surround the player and bring the vivid imagery to life. 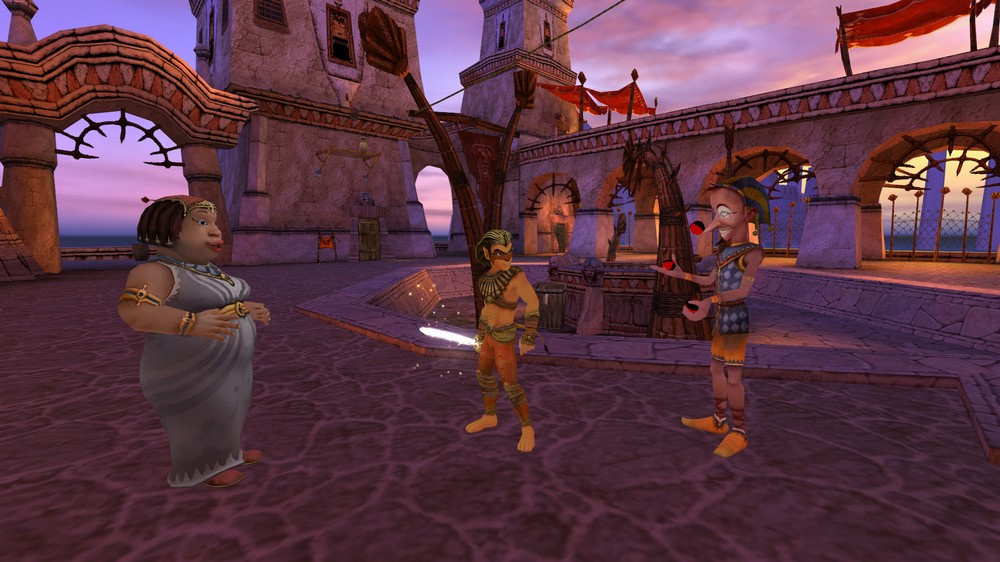 Sphinx is a surprisingly long and satisfying quest that should take the average gamer about 12-15 hours to finish. The difficulty is moderate, geared for teens and older but younger kids will likely find the game enjoyable. The story is linear and so is the gameplay. There are no diverging plot branches or alternate endings and you cannot pick which character to take through a level, so once you have finished the game you won’t likely be returning to Egypt anytime soon. Even so, this is a quality game for only $15.

Sphinx and the Cursed Mummy is a fantastic game that offers dual play modes, challenging puzzles, a progressive character development system, and balanced gameplay that is great for gamers of all skills and ages. There are some not-so-subtle nods toward the Zelda franchise and their game design, but Sphinx manages to create its own unique genre niche with a style and class all its own. I highly recommend it to everyone who is remotely interested, and it’s a great alternative for those not ready for the Assassin’s Creed tour of Egypt. 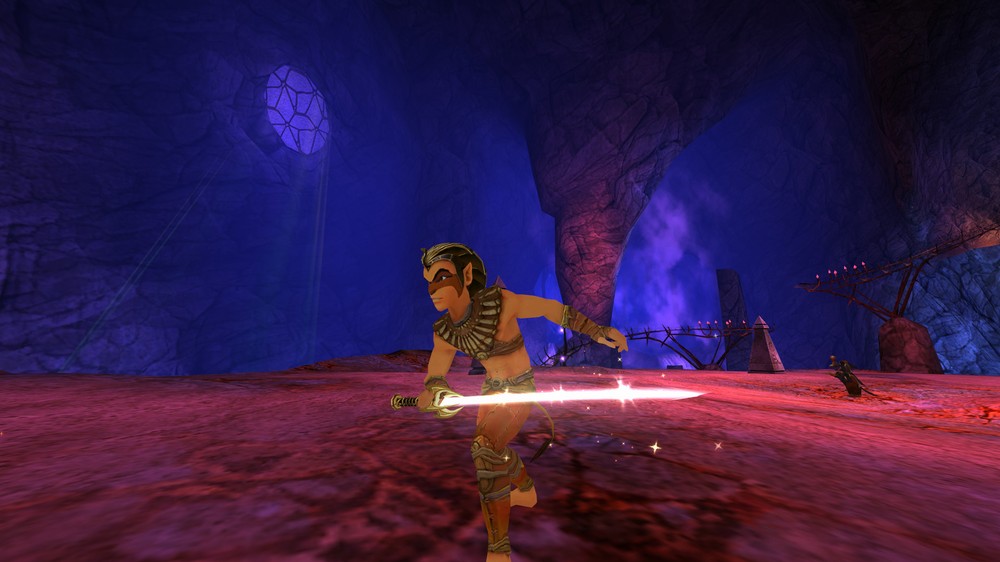