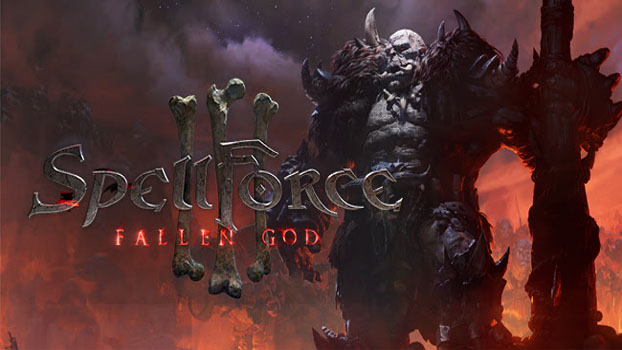 - Can be longwinded, not for those wanting a quick game
- THQ account pretty much required

An interesting mix of real time strategy and RPG.

Until recently I hadn’t heard the name SpellForce; it sounded really cool but I had no background information on it and I’ve played everything from StarCraft and Warcraft 1 through 3 to Supreme Commander, so I thought why not, lets give this a shot.  How much more different can this be than any other RTS I’ve played? As it turns out, its similar to some and stands out from others. SpellForce 3: Fallen God was developed by Grimlore Games and Published by THQ. This review will include some spoilers to the story so please beware.

SpellForce 3: Fallen God is an interesting mix of real time strategy and RPG, a combination I’d only experienced before with the Warcraft series and what got me hooked onto World of Warcraft in the first place. Fallen God is the second standalone expansion for Grimlore Game’s SpellForce 3. Being a standalone expansion is probably the biggest benefit for this game as I had no prior knowledge of the previous games and was really hesitant at first about jumping in, but Fallen Gods treats you as a first timer as soon as you start your campaign.   I just wish it did the same during the character creation process as well. 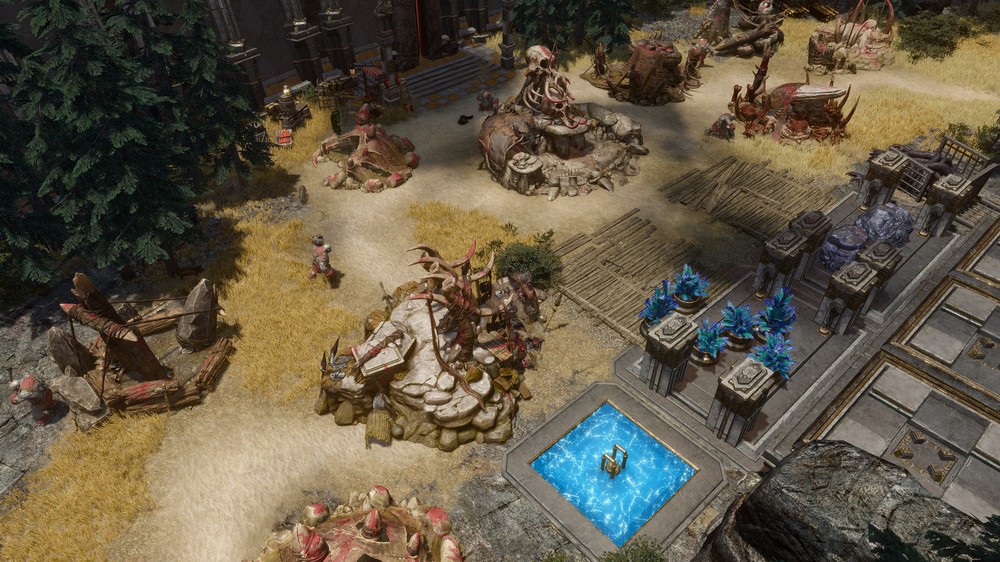 First off, I need to talk about the initial startup of Fallen God.  Immediately it asked me to log into my THQ account, which I don’t have and I’m tired of giving every single company my email and name, so I decide to skip it, but that has consequences. First, you can only play single player, fair enough, I didn’t mind that part as I didn’t plan on playing online at first. Second, it disables achievements, this one pisses me off.  I know achievements aren’t a physical item or something malleable but that is even more frustrating because I don’t want to share my personal information with you, you disable my ability to record my feats in your game.

Putting that aside, once you start your campaign you will create your characters which in this case are “Trolls”; I say “Trolls” because they look like giant freaking Orcs, but no, in this game they are trolls. I imagine Trolls as thin, athletic characters, but these guys are bigger than Thrall from Warcraft. You create their faces, body type, and so on then start allocating stat points and choosing talent trees. You can also go for preset classes with allocated points and talents. I went for the newbie route and went with prebuilt ones. As someone who hadn’t played a SpellForce game before it was a weird introduction; nothing told me I had to choose every single character’s talents and allocate points into stats, that I really had no way of knowing what I would need anyways, so kind of a rough start. 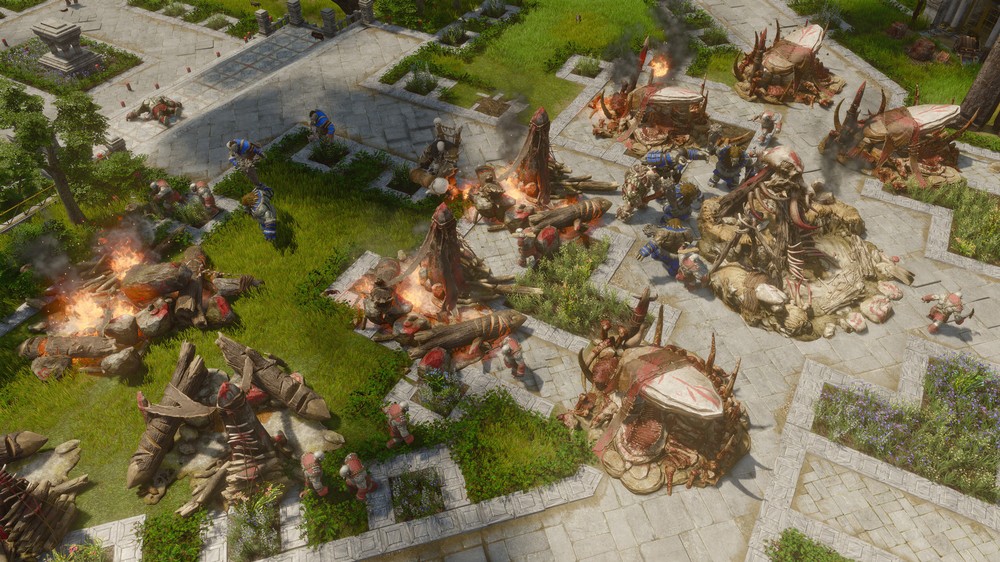 You start your story with three of the four characters that you created searching on a quest to complete “the devouring”, a ritual where you eat the old chieftain’s (your father’s) heart to gain his knowledge and gain the right to lead your people. This quest actually works as the tutorial for your character skill trees, crafting and equipping and also the RTS side of SpellForce where you build a small area up and learn the basics of gathering materials and recruiting warriors. SpellForce 3: Fallen God does a great job of making this tutorial seem integral to the story and not just something you are forced to do, you can actually choose to skip it, but it isn’t just a “do this because you need to learn how”.  It’s presented as “do this because it will allow you to do x,y,z”.  The logistics work the same as many RTS games but are presented in a story correlated way.

While you are learning all this literal world building you of course still have to handle your equipment. Each character has a certain weapon/armor they can use based on their stats you’ve chosen.  Don’t have enough constitution? Can’t wear that heavy armor you found. It’s a pretty normal system to find in RPG’s but one I’m not accustomed to yet. Finding a piece of gear may not mean you can use it.  It could belong to the human race and troll’s cant use it due to their vast difference in size. You can smelt down these pieces at a blacksmith and then craft new pieces for you and your party. I found a few pieces and was rewarded with some ready to use gear after certain quests but always keep an eye out for items to craft. 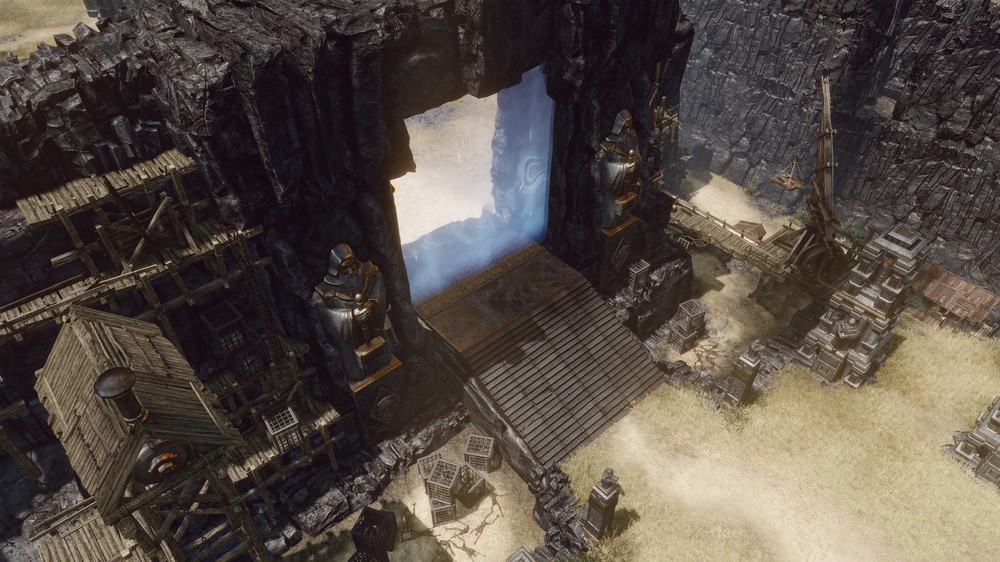 As you progress past this initial quest you will be given the next step to meet up with a “stranger” which also opens up the world map. At first it seems the world map will work in a linear fashion, allowing you to move back and forth between previously visited locations and new ones for you to traverse. This “stranger” will give you the quest that this expansion is named for, reviving a fallen god.  In doing so he claims you can fight back against the enemies that have destroyed your home and take charge. We shall see how that works out. One of the very important parts of each map are the “Godstones” that not only act as spawn points but also as a fast travel method. Activating/Finding each one can link you to another one on the same map and help you traverse it faster.  These make revisiting old locations a lot easier from what I can tell, as well as expedites questing in new zones.

So, its 2020, lets talk about the important thing. How does it look? Pretty damn good is my answer. As soon as I loaded in I was impressed by the level of detail in the first map based on a jungle area with caves to explore and ruins to find. The greenery stood out, the waterfalls looked fluid and smooth. The characters make a stark contrast with their brown/gray looks to all the color I saw around them which made everything else stand out that much more. Their villages were all detailed with skulls, bones, workshops that you could tell what they were intended for. SpellForce 3: Fallen God has also made the story cinematics keep some of the charm by making them look drawn on living parchment, to say the characters still move and fire still burns and moves; overall, very impressed. 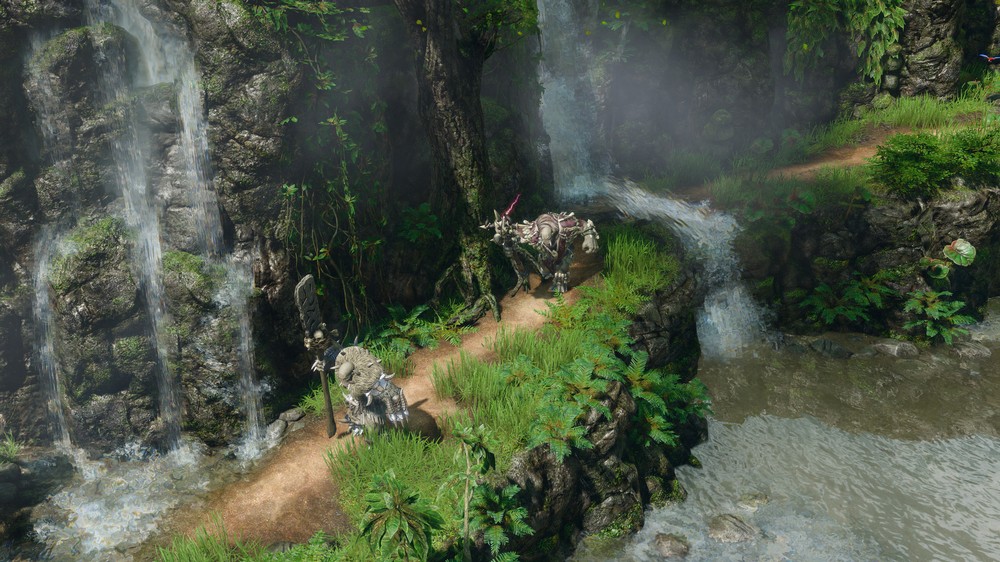 Then we have the audio presentation; also top tier work on this. You hear your group of trolls have conversations as you walk around.  They mention old fights, things you encounter, story choices you have made come up and every interaction you have to progress the story or quest has great voice acting work.  Each character sounds like their role. The old shaman has a tired sound, the young blood is boastful, energetic and isn’t afraid to be loud. There is a caveat to this impressive work.  You spend a lot of time listening and choosing conversations. Be prepared to spend 40% of your time talking and listening.

Overall, I recommend any RTS fan to try out SpellForce: Fallen God, even if you’ve never played it as I did then even better, get introduced to a new IP just like I did. There is a solid 20-hour solo campaign and plenty of online PvP and co-op content with ranked play, four RTS factions, and even a level editor to create and share your own content on Steam Workshop. The online community is surprisingly large and active.  Just make sure you have a THQ account. 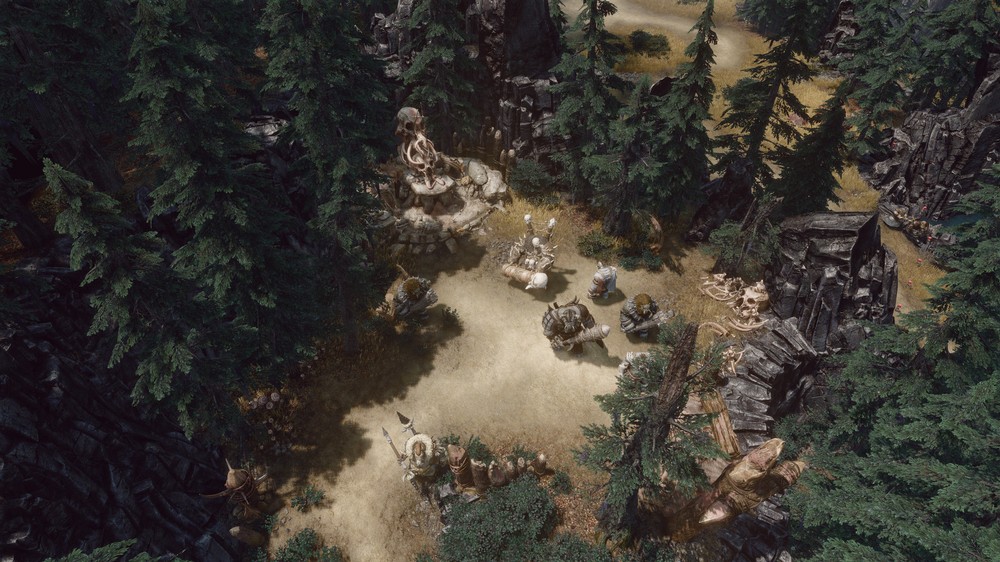 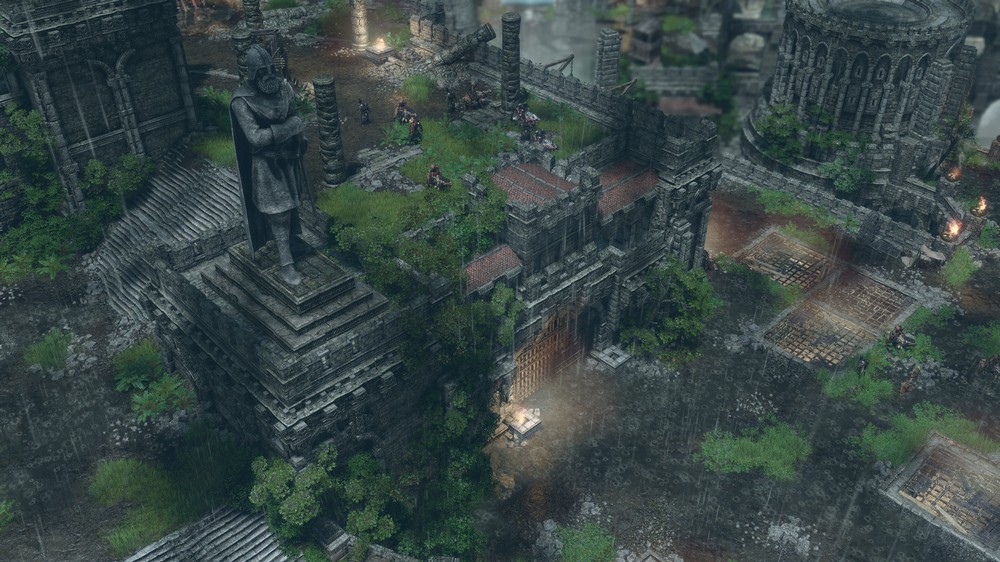 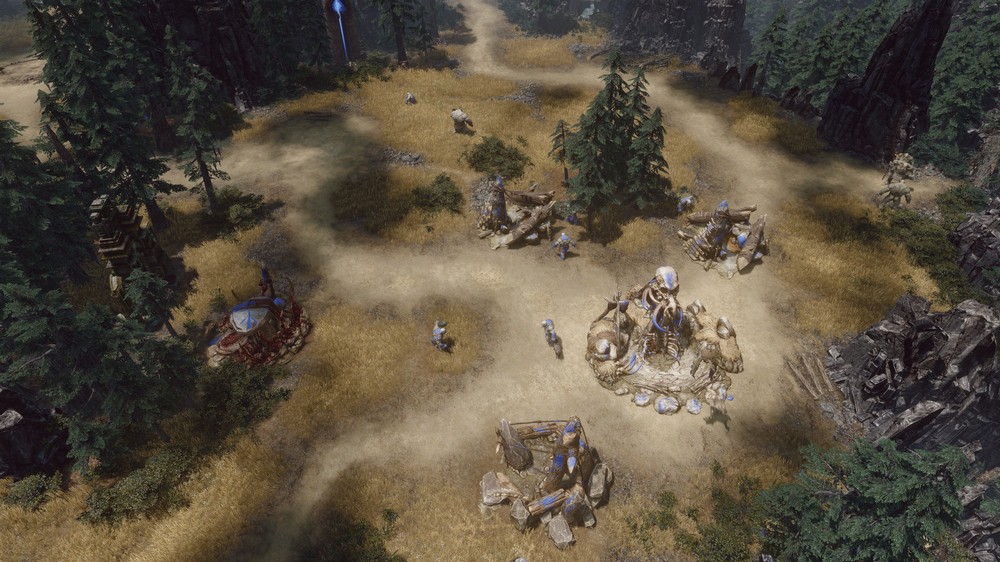 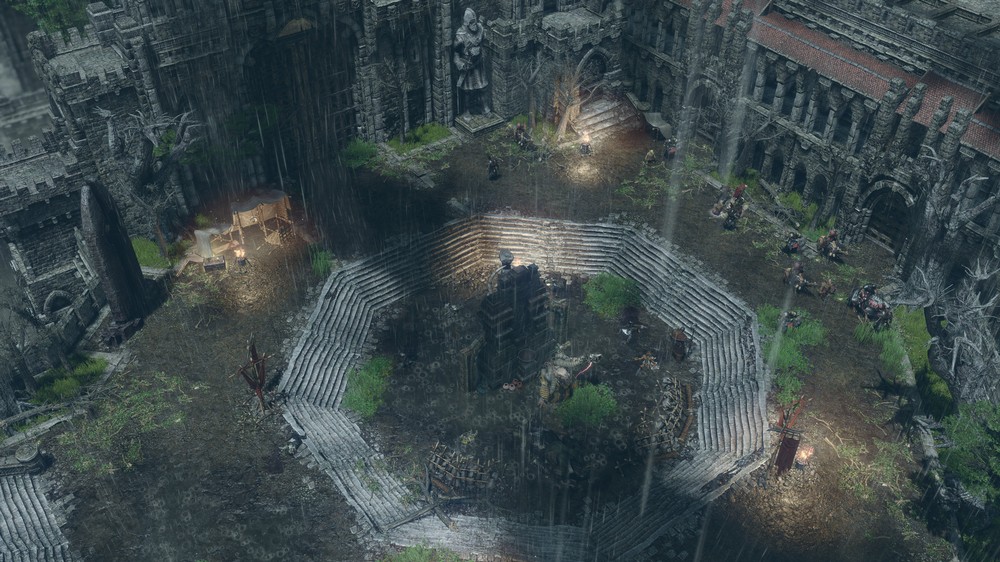 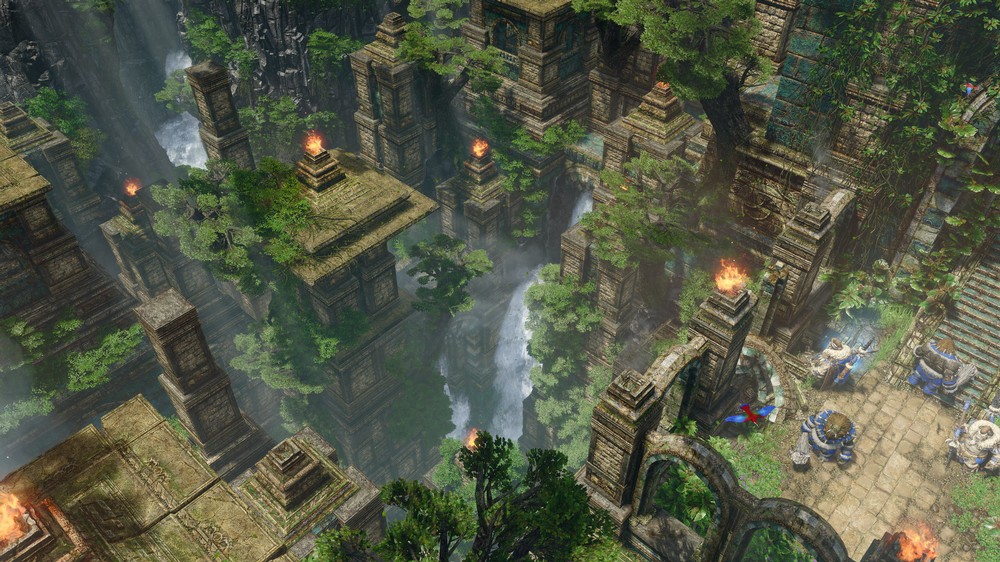