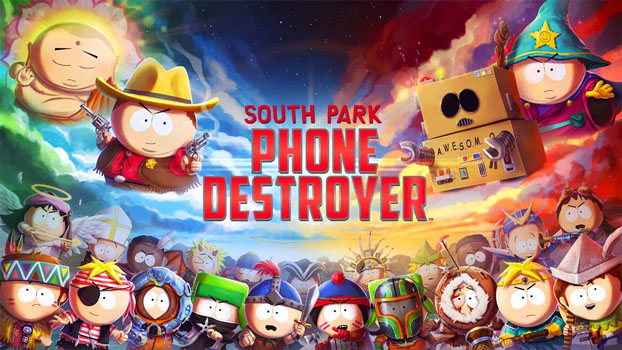 It’s been awhile since I’ve reviewed a mobile game but even back when South Park: Phone Destroyer was first announced I had already added this title to my schedule. As a mega-fan of the TV series, movie, and two RPG video games, I was eager to see how Stone/Parker along with Ubisoft and RedLynx were going to bring my lovable cast of Colorado middle schoolers to my iPhone, and while a Magic-style card battle game wouldn’t have been my first choice I see what they are trying to do here.

Once again the South Park youth are split into two warring factions. We’ve already covered fantasy and superheroes on the PC/console games, so this time things kick off with classic Cowboys vs. Indians before moving on to Aliens, Monks, and Ninjas. As expected, Cartman is exploiting the New Kid (you) who seems to be an expert when it comes to using his phone, and the game does a brilliant job of sucking you into the universe by having various kids call your phone to FaceTime with you. There is a surprising amount of spoken dialogue although most of the interactions are handled through pop-up text messages and chat room posts that scroll through the game display. 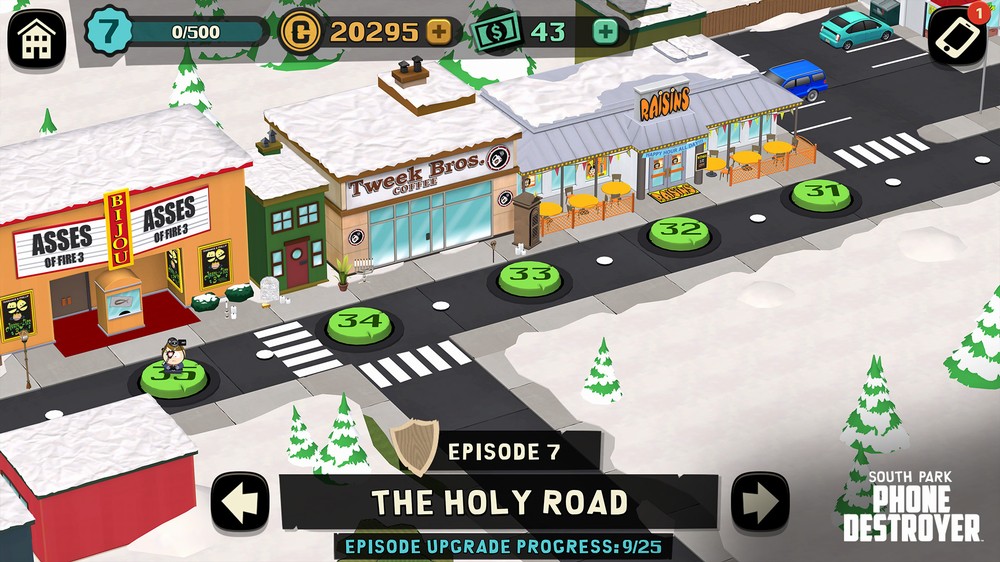 Every bit of Phone Destroyer oozes with South Park charm from the detailed artwork on each card to the 3D version of the town that doubles as your battle map. The various menu screens, FaceTime calls, and especially the in-game character art, models, and attack and power animations are totally awesome. Even the music and sound effects add to the experience along with more spoken lines of dialogue than you’d expect.

Moving beyond presentation, Phone Destroyer is a card-based RTS game where opposing “commanders” play out cards from their respective deck of warriors. You have ranged, tanks, assassins, and fighters; pretty standard stuff and each with their predictable set of rules and limitations. Assassins are fast but weak while ranged characters can stay back and peck away at the enemy’s health bars from a safe distance. You also have non-character cards like a Rat Swarm, an aerial Pigeon attack, or elemental attacks like lightning, fireballs, and freezing. All cards cost a set amount of energy to play, so there is an underlying energy management system in place where you must decide if you want to play a character than cost four units or two cards that cost two points each. Energy builds slowly up over time for both players, so whether you are playing against the AI or a real person in the PVP battles, victory isn’t always about the cards in your deck, but how and when you play them. 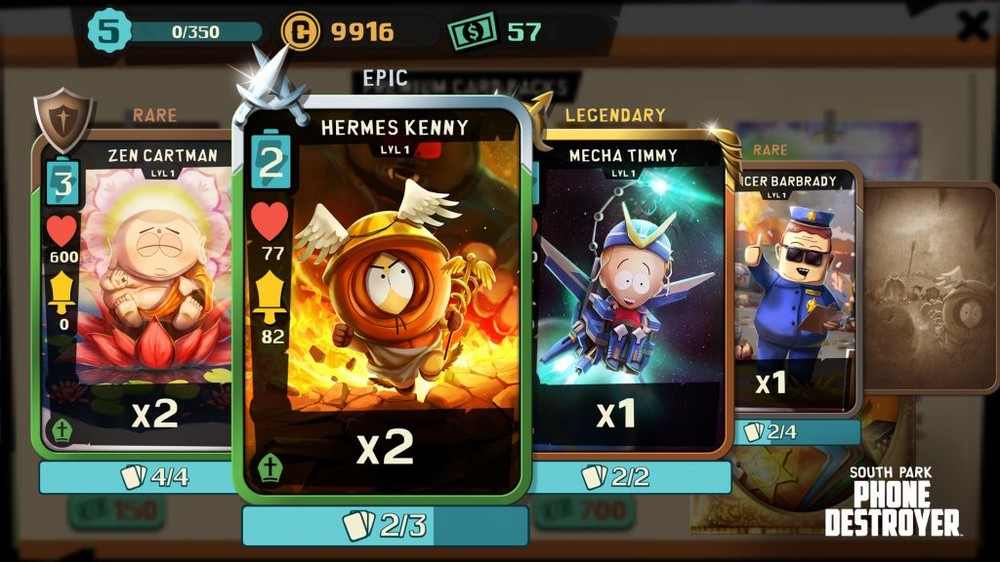 There are also dozens of other resource cards you collect with free packs awarded every four hours of real-time as well as victory rewards, locker room winnings, and of course in-app purchases.   These item cards allow you to upgrade your characters cards, boosting health and attack stats, and eventually even leveling up the card when you collect enough duplicates to cash them in. You also have coins and two types of currency to spend on upgrades and perks. I was surprised how non-intrusive the in-game purchases were, in what is arguably a AAA mobile game using a major license being offered for free.

My only significant issue with the game is the mandatory inclusion of the PVP into the single-player game. In single-player you get a map of South Park with a trail of battle dots that lead to the eventual boss, whereupon your rinse and repeat with a new opposing character (Kyle, Kenny, etc.) and a new thematic costume change. There is a challenging and progressive difficulty scale that seemed to match my casual approach to playing the game, but somewhere just after I hit Lv5 I came to a game-halting wall, which is when I decided to write this review. And since I refuse to “pay to win” I am now locked into a painful grinding situation or risk just deleting the app. 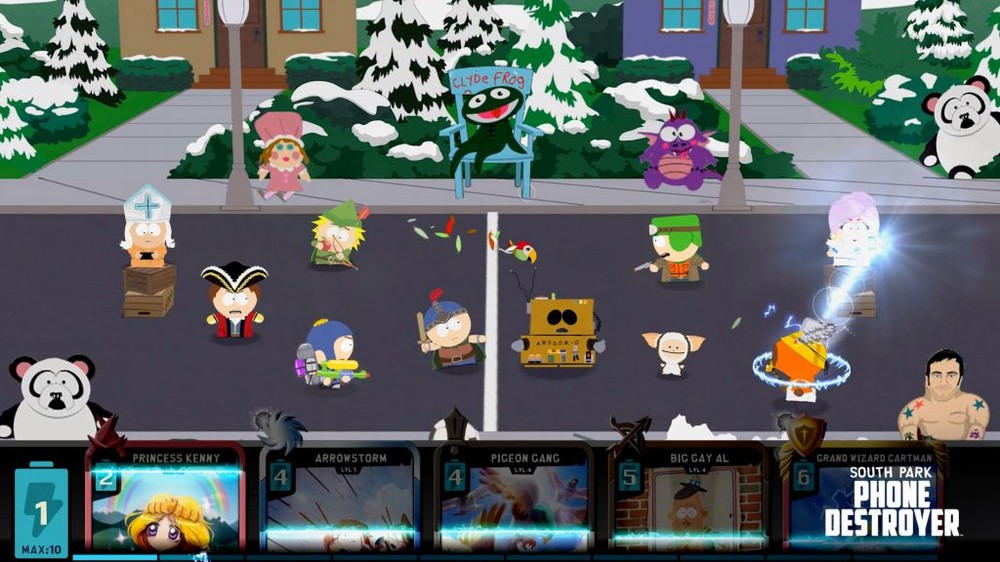 Up until now there have been these intermittent PVP checkpoints run by Butters called the “Great Play Wall of China” where you must win a certain amount of PVP battles before you can resume your solo adventure. Everything was fine up until now, but now, after a week on the app store, either everyone else is so much more advanced than myself or I have totally screwed up my own deck building that it has been taking me 20-30 attempts to win a match, and the current wall requires six victories. I’m at four now after two days of casual battles, and I still only seem to win when I get randomly matched with a Lv3 or LV4 players; and even then lower level characters can seem to beat me quite easily. As someone who doesn’t enjoy online competitive gaming – especially with strangers – I really wish this PVP was kept to its own game mode and not integrated into the main game.   I’ll probably struggle through this current wall and grind out two more victories, but I fear the next one will be the end of me and this game.

If you enjoy RTS games, or collectible card battle games, or anything with a splash of South Park then you definitely want to check out South Park: Phone Destroyer. After all, it’s FREE so the only thing you have to lose is countless hours of your life once you become hopelessly addicted. And even if you only get as far as I did before you hit that pay/play wall, you won’t regret your time spent in South Park. 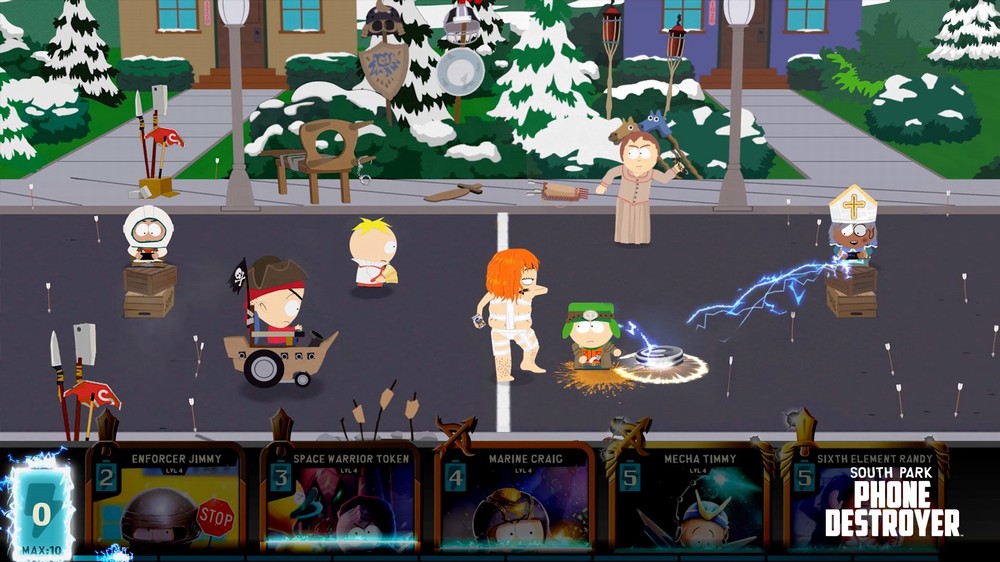 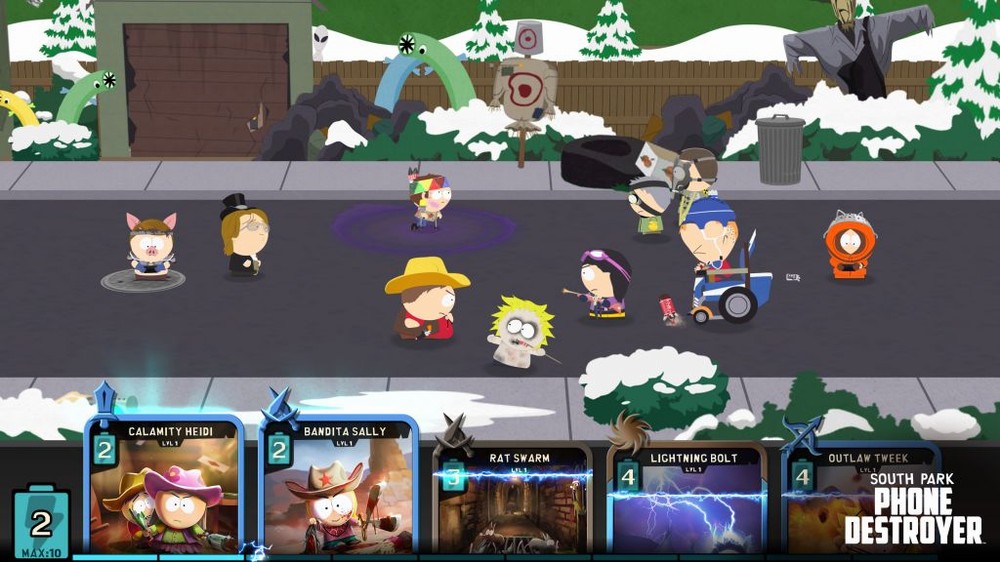 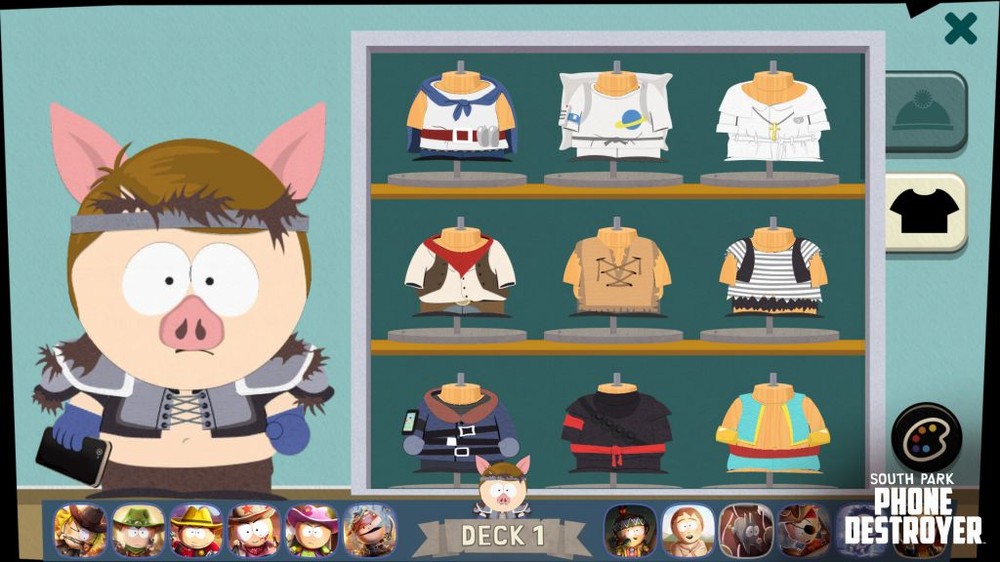 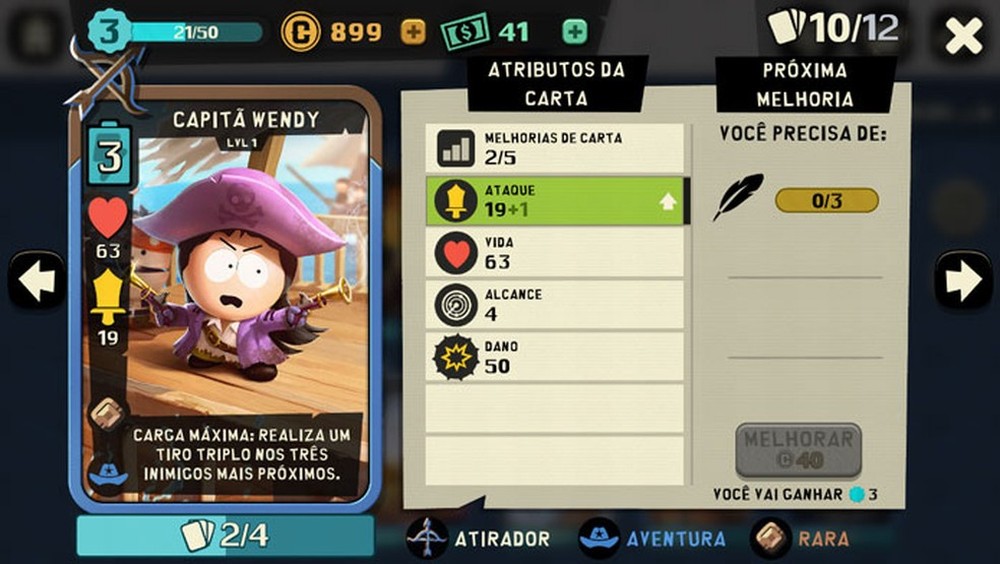 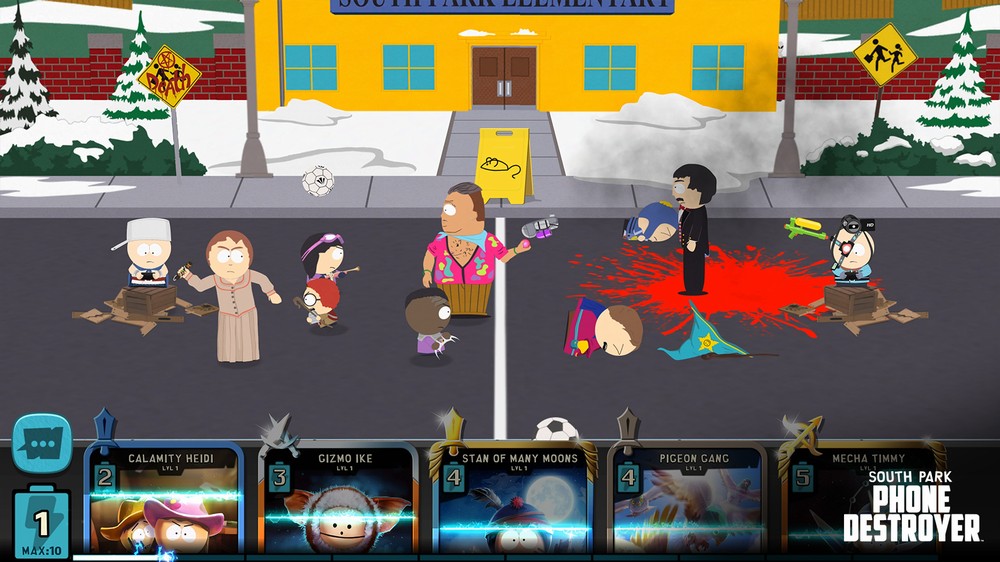 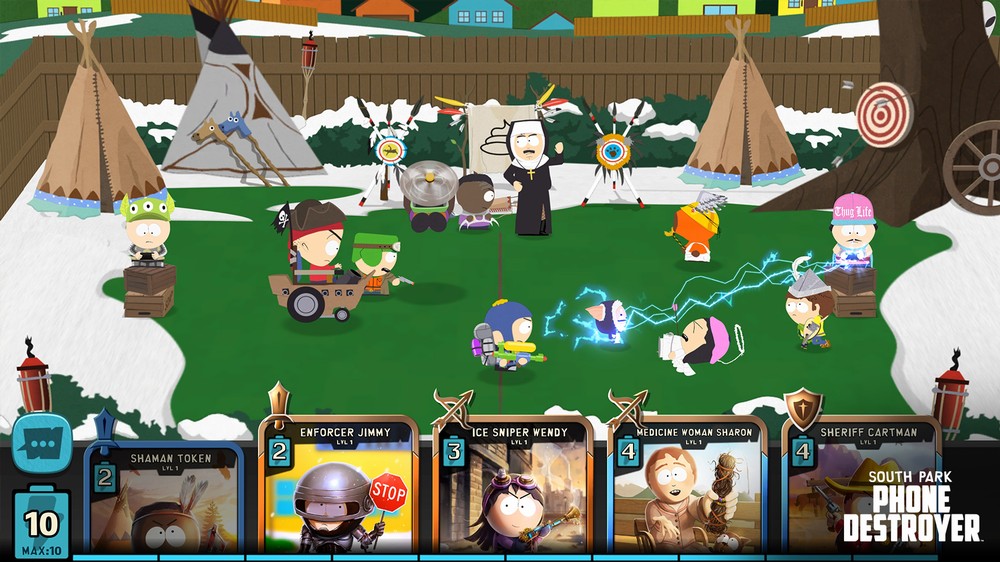