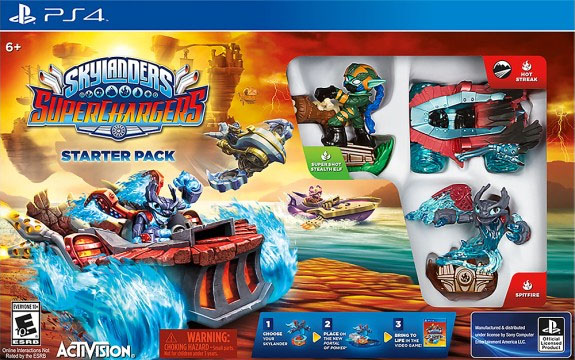 A big black hole of money

Another great Skylanders game with vehicles too, better hold tight onto your wallet!

Of the five Skylanders console games that have been released over the past half-decade, I have had the pleasure of reviewing all but one. So, every year as the holidays near, and that call comes in that Activision is sending us a review copy of the newest take on their popular Toys-To-Life franchise I think to myself “I wonder if this will be the year that Skylanders finally jumps the shark?”

And who would blame me for thinking that? After five large-scale releases in just as many years, most gaming franchises would already be firmly pointed down the road leading to the dark abyss. Even the most esteemed sports franchises are having a difficult time keeping it together to maintain yearly releases, and all they are doing is delivering the same old football and basketball game with an updated roster. They don’t have to think about developing completely new gameplay concepts, or designing and manufacturing new characters (both virtually and physically) – or figuring out how to tie it all together.

Yet, where many have failed, the folks behind the Skylanders franchise (Toys for Bob, and Vicarious Visions) continue to deliver fresh new approaches to the toy-to-life genre. As a result, each successive release sees families lining up for their yearly dose of Skylanders mania, and I am certain this year will be no different with the release of Skylanders Superchargers. 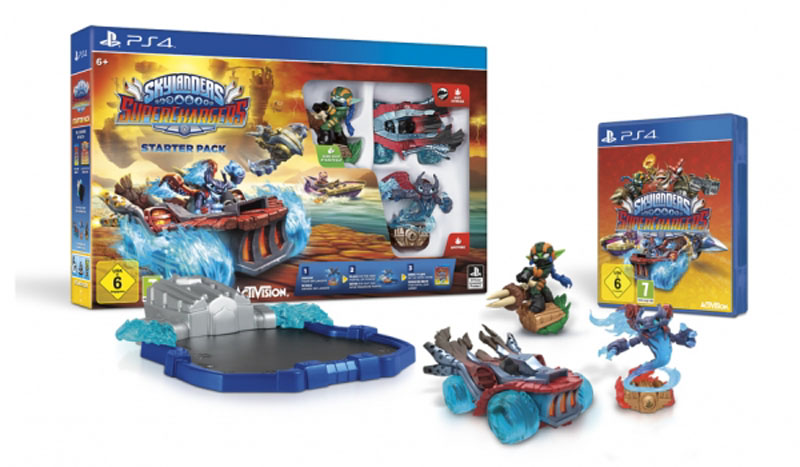 So what is this “toys-to-life” genre that Skylanders all but introduced to the world of console gaming?

It is a uniquely interactive gameplay universe in which gamers amass a physical collection of figurines (via store purchase, trade, etc.) that contain embedded Near Field Communication, or NFC, technology (i.e. RFID chips) containing data about the character they represent. This data not only includes general descriptive information, but also any/all of the characters’ in-game stats (Health, Upgrades, etc.).

The gaming console interacts with these characters through a USB-connected NFC receiver, or what the Skylanders term as the “Portal of Power,” and converts the figurines’ embedded visual and statistical data to the onscreen game. The onscreen game is then programmed to deliver a unique gameplay experience built around these figurines and their embedded attributes –certain levels and enemies might be more manageable with specific character types, or storyline braches that may only be opened by characters of certain attributes.

So, while the game’s main mode can technically be played start-to-finish with the character and items included in the $70 starter pack, gamers are incentivized to purchase additional figurines and accessories in which to further their gameplay experience. And believe me, they don’t come cheap. At $10 to $30 each, the figurines, accessories, gameplay packs – and now, vehicles – add up quickly. 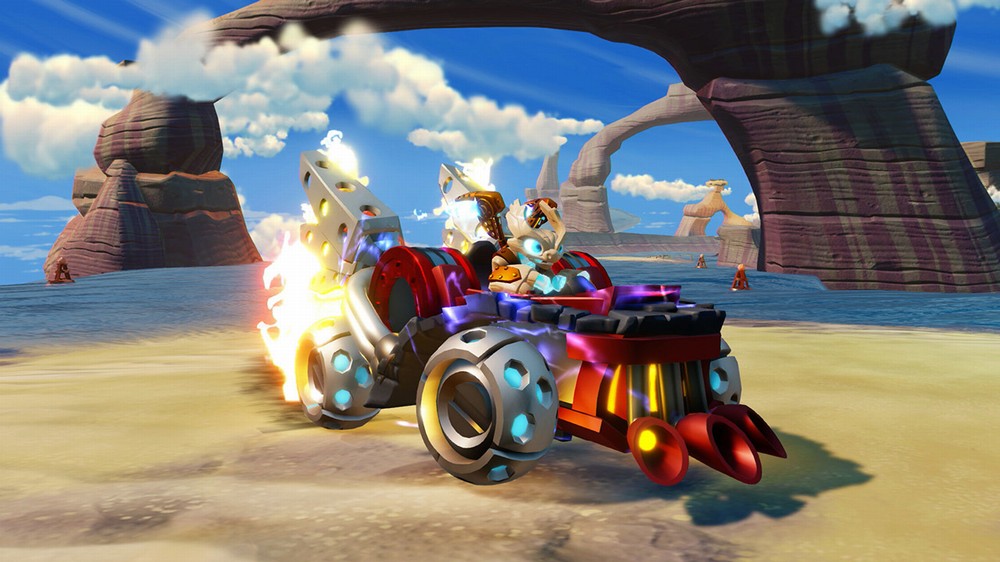 Just to put in perspective the kind of money involved, a fellow gaming site calculated the minimum cost required for accessing each and every level in last year’s Skylanders Swap Force, and it was right around $250 – and that was minimum. That in itself is a staggering figure, until you look at the total possible cost for those inclined to collect every Swap Force figurine and accessory, which was calculated to well over $1100. That’s some serious cash, folks – and it’s no wonder then that Disney and Nintendo are trying their hardest to break into Activision’s market with their own versions of the toys-to-life franchises.

But we are not here to give a history lesson on toys-to-life games – we are here to speak about one of these games in particular, the newest release in the Skylanders franchise, Skylanders: Superchargers. Much like the name implies, in a nod to the great kart racing gaming franchises (Mario Kart, Crash Team Racing, etc.), Superchargers introduces the concept of vehicular racing/combat to the Skylanders’ universe. And they do a pretty darn good job of it.

Let’s be clear, Skylanders Superchargers is not a clever way to introduce a new Skylanders kart racing franchise to the gaming world. A large majority of the game follows the very same character-driven platforming adventure formula that all of the previous Skylanders titles have employed. Superchargers takes that platforming adventure formula, and then seamlessly incorporate a series of racing and vehicular combat segments resulting in a platform-racing hybrid that everyone from Skylanders newbies to franchise veterans are sure to enjoy. 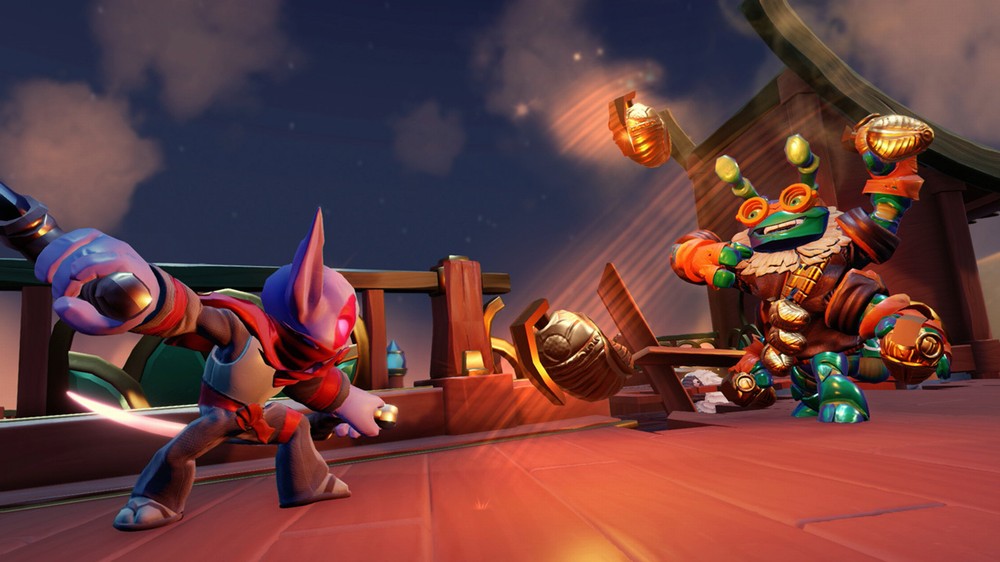 The intro story is a bit confusing –Kaos has captured Master Eon and encased him in crystal, he has also captured and imprisoned Hugo, Cali and Flynn. This has given him the power over the portals leading to the Skylands, in in so doing rendered the Skylanders obsolete. The trio escapes and happens upon Kaos’ newest contraption – the Sky Eater – that is consuming the beautiful blue skies of the Skylands and leaving behind the darkness. The trio receives a message from Master Eon that a special team of Skylanders, the Superchargers, has been called upon to battle Kaos in a bid to destroy the Sky Easter once and for all.

From there it’s a pretty standard Skylanders platformer – which means it is absolutely awesome. With every release the franchise is looking more and more like one of the classic PS2-era Ratchet and Clank titles. Of course this may be aided by the fact that Cali and Flynn could easily pass for Lombax creatures – but it also goes for the gameplay which, with every iteration, just seems to get better and better. If you can remember how epic the third Ratchet and Clank title – Up Your Arsenal was, you get a pretty good idea of how fantastic the Skylanders gameplay is getting.

So while there is the requisite wander, smash, collect, and combat platforming – Supercharges heads straight out of the box with truly unique gameplay mechanics like perspective portals which (like the Portal series has made famous) transport characters to other planes in which the perspective is shifted along with the controls. Add time-based puzzles into a field of perspective portals, and things get really interesting. 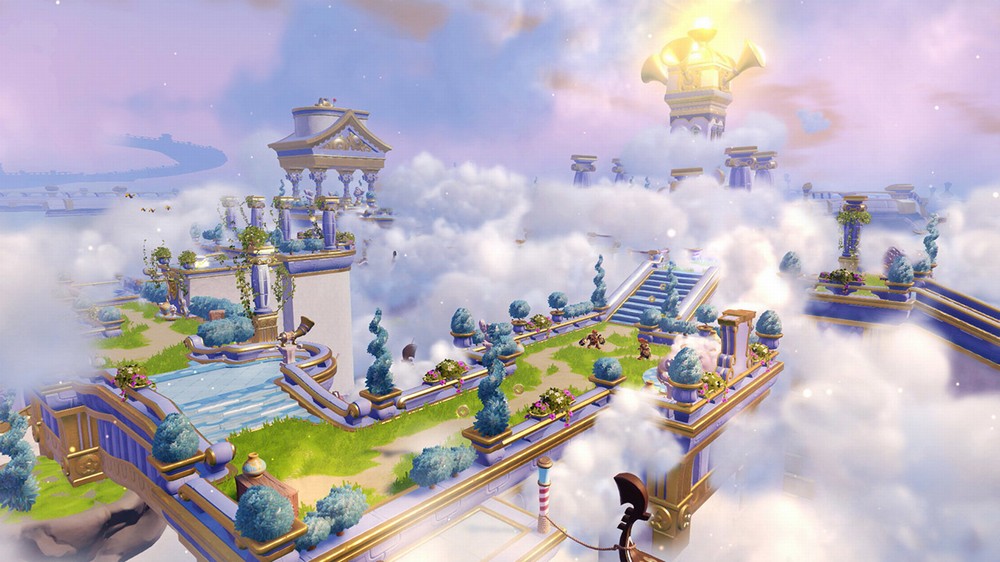 And then yes, there are the vehicle segments – and those are fantastic. As mentioned earlier, the vehicular segments come in two forms; racing and combat.

Racing segments are fairly straightforward over-the shoulder driving as you would expect from Mario Kart or ModNation Racers. In the story mode, these racing events more or less appear as travel segments or boss battles, but the game also features a standalone racing mode as well. The controls are the typical gas, brake, steering, powerslide, and weapons fire.

Combat segments on the other hand, utilize a raised isometric view and dual-analog controls in which gamers have full independent 360° control of the vehicle and the weaponry. This plays out a bit like the old-school Atari-era classic Combat, or the PSN title Red Faction: Battlegrounds and as so the controls are nowhere near as intuitive as the racing controls. Gamers are advised to go into the control settings and find a combination that works, because out of the box things are pretty sketchy.

The only real rub with the vehicular segments is that only one vehicle comes in the starter kit – a land-based vehicle called Hot Streak. This vehicle will allow gamers to access the land-based storyline, but not of the Air or Sea storylines – so the purchasing of at least one each of the Air and Sea vehicles (typically $15 each) quickly becomes a necessity to access 2/3 of the packaged game. 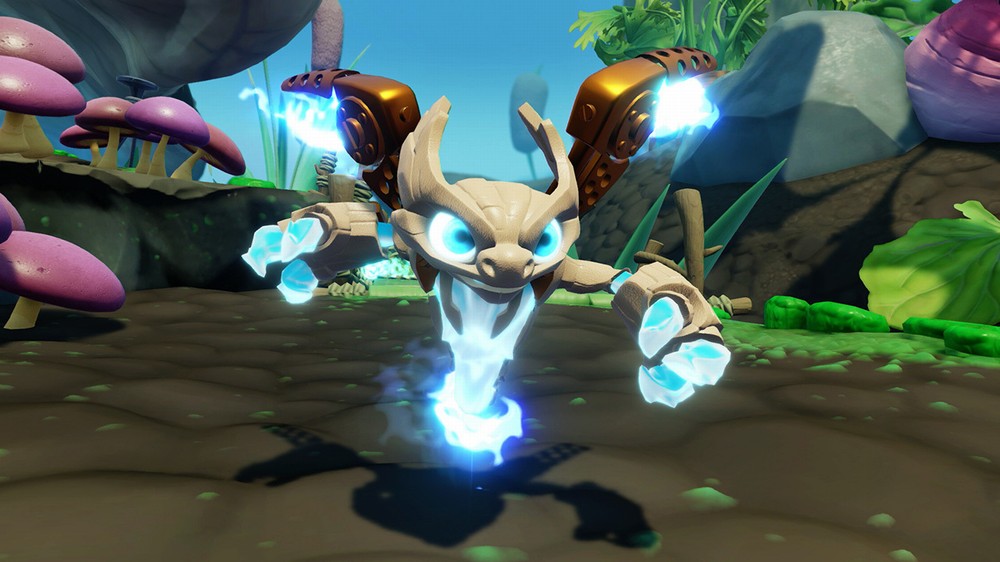 Superchargers gives gamers 4 levels of difficulty to choose in the main story mode – Beginner, Adventurer, Expert, and for the first time unlocked from the get-go, Nightmare. For the purpose of the review, we chose Expert and that proved to be about right for a couple of moderately seasoned gamers. And yes, Superchargers is playable cooperatively with up to two players – including the vehicle segments in which one player steers and the other fires weapons.

The game comes with yet another new Portal of Power, which has been designed to interact with all of the previous Skylanders characters, including Swap Force Hybrids and Trap Team crystals. At this point, between the various systems and versions we have amassed in our collection – our storage space is reserved for Skylanders portals is getting a bit overwhelming (and frankly, confusing). Luckily Superchargers’ portal features a big roaring engine to make it easy to spot.

Skylanders Superchargers is absolutely gorgeous. And by that I mean both the physical and the virtual. Evident immediately in the exquisite character designs – both on screen and in the tangible figurines – Skylanders’ characters always have been, and still remain, works of art.   Visually, the whole game is a work of art with some of the best visual effects yet seen in a platformer, and some of the most amazingly creative level design. 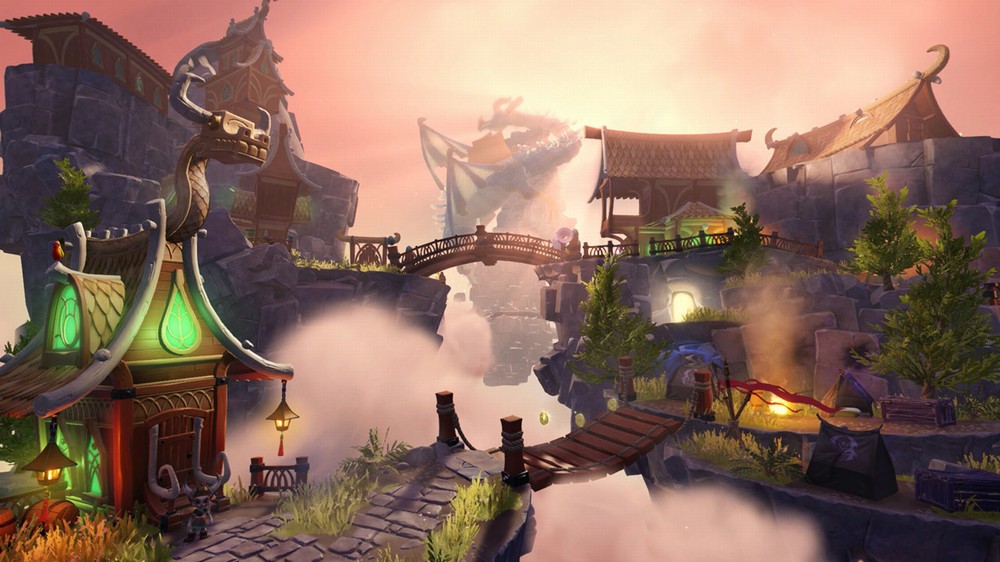 And as always, the voice acting is top notch. You know me – any game with Patrick Warburton’s voice is a game I want to listen to, and his work as Flynn is top-notch. Cali is voiced by gaming vet Sumalee Montano, who likewise delivers a superb performance.

Skylanders Superchargers is an amazing game – for sure. But more and more, the overall financial cost associated with these games is weighing on me. I feel lame complaining, but even though I received the starter pack from my editor, I am already feeling the sting of another $30 just to get a couple of vehicles to play a 2/3 majority of the game I’m locked out of. I can only imagine the families that paid full price ($75) for their starter pack only to find that they cannot play 2/3 of the game. Of course, for what you are getting $15 is totally worth it given the detailed character design (and most-importantly the NFC communication chip) but that’s a lot of extra cash to have to start shelling out.

But, I cannot deny a good game when I play it, and Skylanders Superchargers main story is technically playable to the end with the starter pack, so it will definitely get a good rating. But be prepared of the overwhelming urge you will surely have with collecting more and more Skylanders and accessories. 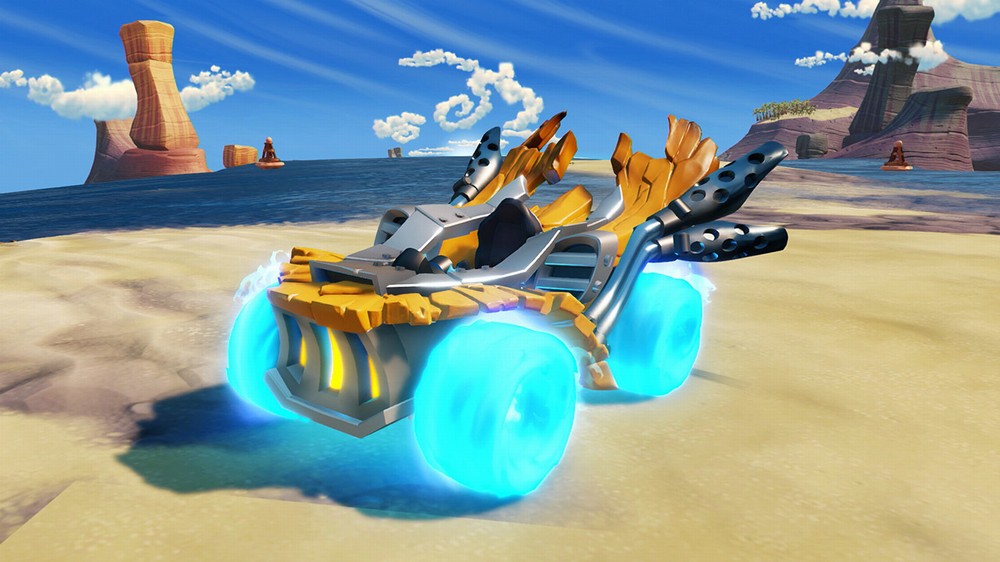 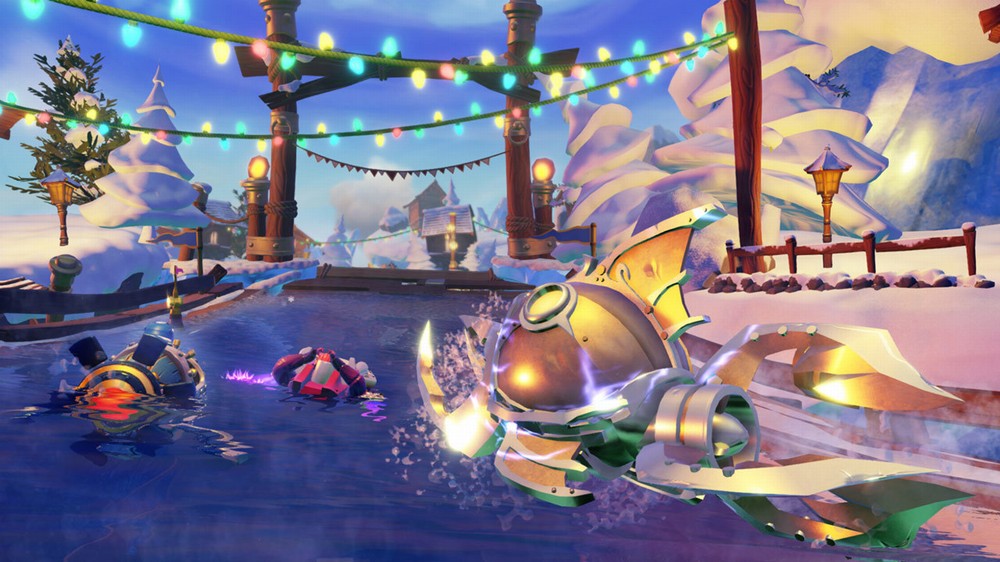 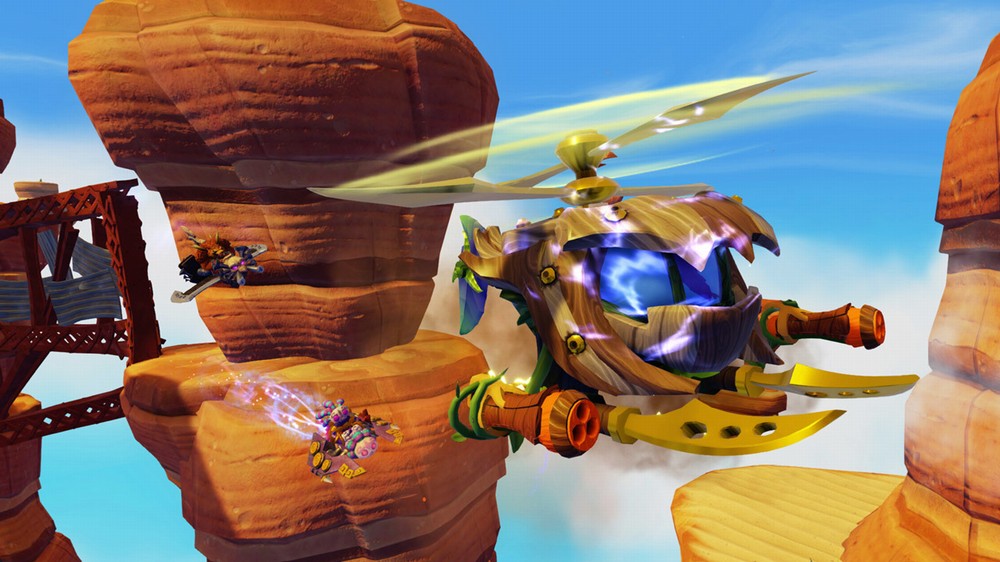