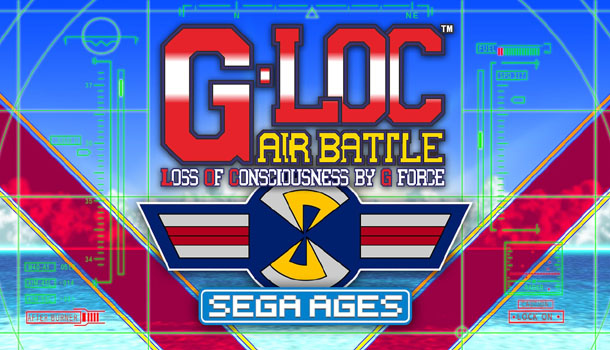 - Does show its age in areas

A great opportunity to experience a classic arcade flight simulation.

I wasn’t old enough to play G-LOC: Air Battle when it first released in 1990, and by the time I would have been visiting arcades about ten years later, it would have been considered ancient history, replaced by games such as Time Crisis and The House of the Dead. However, the beauty of the SEGA Ages series rebirth on Nintendo Switch is that gamers such as myself get to play games that would otherwise have passed us by.

G-LOC stands for (sort of) Loss Of Consciousness by G-Force, and while playing it on the Switch won’t cause you to pass out on your commute, the original arcade cabinet did move about while you were playing, in an attempt to simulate how it might feel to be take part in an actual aerial dogfight. This is a difficult sensation to emulate on a console, however, the developers have done an admirable job in trying to incorporate the sensation here, by simulating the movement of the cabinet as part of your peripheral vision on the screen. More than once I found my stomach dropping when I was taking a sharp turn, and while the sensation isn’t as intense as playing in VR, I was surprised that I had as much of a reaction as I did to the setup. 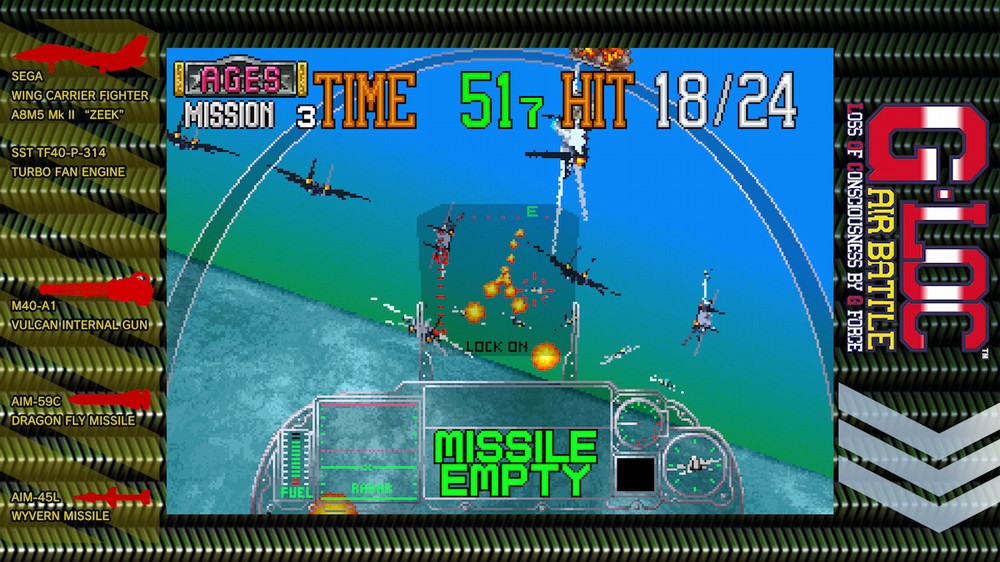 The fact that the arcade cabinet takes up a portion of the screen serves another purpose, in that it helps to focus the playable image of G-LOC, allowing you to forgive the low resolution that comes from playing a game that is now thirty years old. There are options to display the game different, either on static screens or as a simulation of a regular, static arcade cabinet, and similarly you are also able to choose from a variety of scanline options or background wallpapers if you decide to step away from the motion-enabled cabinet effect. It’s clear that a lot of love and care has gone into the creation of this Switch rerelease, and fans of the original should be happy with the number of extra bits and pieces that are available to experiment with.

Part of these extras, much like some of the other SEGA Ages releases, is the ability to access the backend of the game, as if you were dictating the rules of operation of the arcade cabinet itself. Here, you can decide how many credits a coin gets you, the difficulty level of the game (outside of the Beginner, Medium and Expert options that you can choose from the front end) and even whether you are playing the Japanese or International versions. You’re also able to decide between Arcade and Freeplay modes, and also a new Ages mode, which allows for quicker lock-ons to enemies and a faster experience overall. 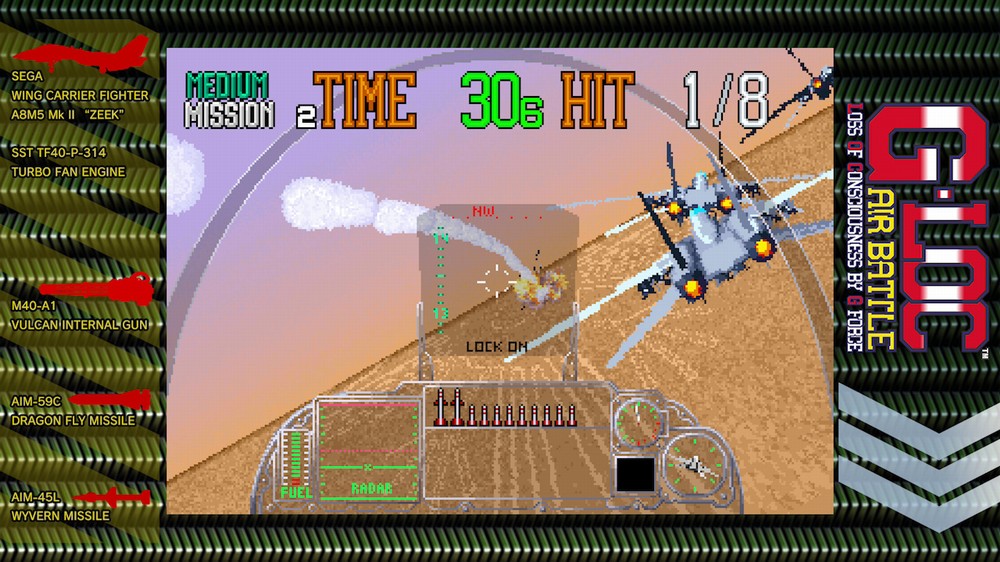 In terms of gameplay, G-LOC: Air Battle has areas that feel dated, but also has areas that have held up surprisingly well considering its age. The visuals are clearly early 1990s but even then, I can imagine being blown away if I had seen this in action in the arcades, as they’re still clear and it’s easy to follow what’s happening. Movement, on the other hand, is sticky and difficult to understand, and there were sections of the game where I really wasn’t sure how to control my plane or to get it to do what I wanted to do. As you play through the various campaigns (3 by default) you’ll encounter different terrain and obstacles, and while for the most part you’re fighting in an open landscape, there will be enemy fighters that you just can’t reach, and that proves frustrating time and again.

For a contemporary audience, the answer to whether or not you’ll enjoy ­G-LOC: Air Battle will really depend on your level of appreciation for videogame history. There is a lot to enjoy here, but you’ll need to come with a degree of patience and understanding. Once you understand the experience, though, this is a great game to pick up and play, blasting through a few missions before putting it down again. This isn’t really the kind if experience where you’ll be playing for hours on end, but arcade games rarely are, which is why the Nintendo Switch is the perfect option for a game such as this. If you were a fan of the original release, I think you’ll find a lot to enjoy here also. There’s a great deal to play around with behind the scenes, and there’s enough of a variation between new and original content that G-LOC presents the best of both worlds. This is a great opportunity to experience a classic arcade flight simulation, and I only wish that I was able to experience that moving cabinet effect in virtual reality. 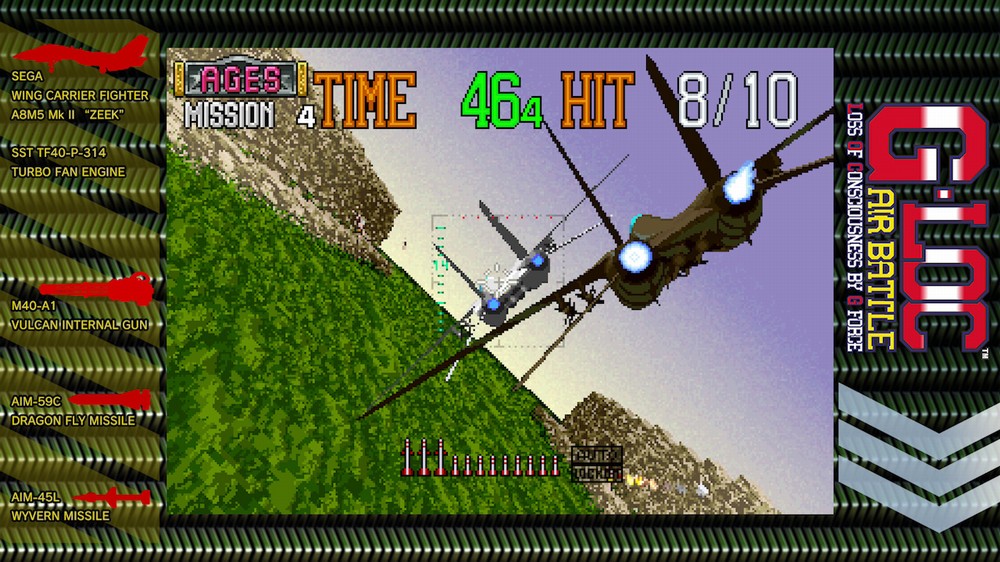 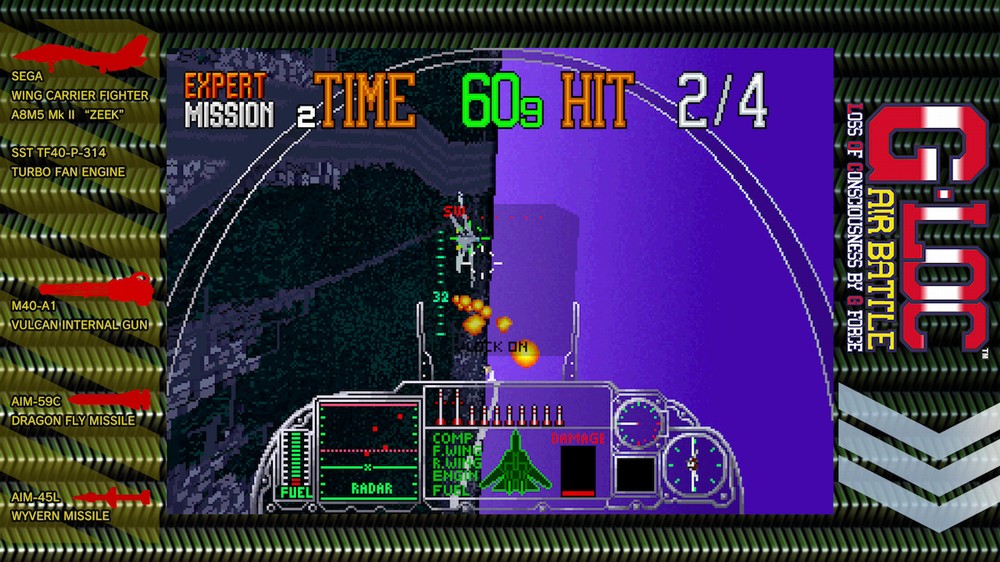