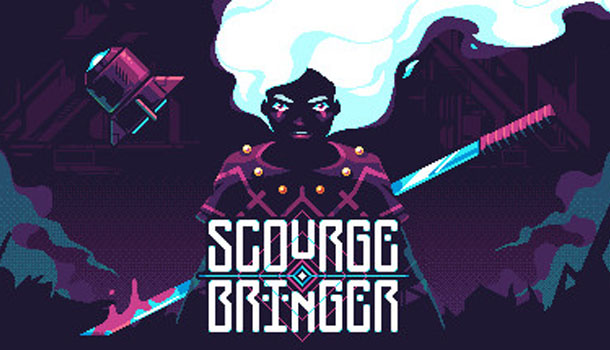 - Nothing we haven’t seen before

I love when a game isn’t afraid to show you what it is right from the start, and ScourgeBringer is a great example of this. A few days prior to playing Flying Oak’s roguelike title I had no idea that the game existed, but mere moments after starting the game I was fully invested in the fluid movement and snappy combat. Set in the post-apocalypse, ScourgeBringer puts players in the role of Kyhra as she attempts to uncover the secrets of the Scourge and bring redemption to humanity.

If you’ve played a game in the roguelike genre before then you’ll likely have some idea of what to expect from ScourgeBringer, and that is perhaps the game’s biggest weakness: there isn’t much here that hasn’t been seen before. You’ll battle through any number of generated rooms and dungeons, defeating enemies, taking on bosses and sub-bosses and earning both temporary and permanent character upgrades. Of course, you’ll also die a lot, but each time you die you’ll learn a little bit more, whether it be more about Kyhra and her abilities, more about the enemies that you’re fighting, or more about the intricacies of the world that you’re currently struggling through. There’s a near-constant sense of progression to ScourgeBringer, and this means that you rarely feel like a run is wasted, no matter the length. 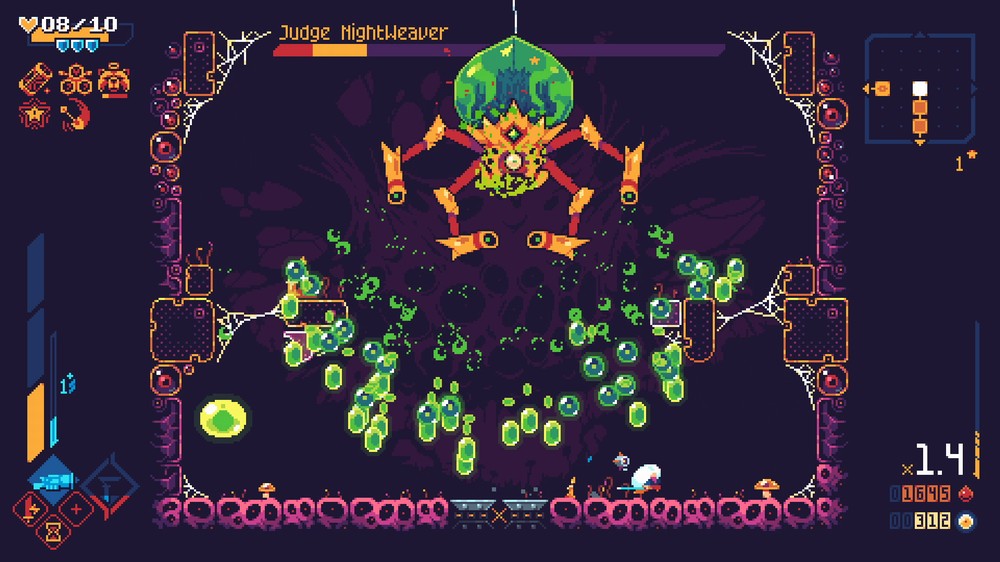 This sense of progression helps ScourgeBringer feel like it works on multiple levels. I played in both long sessions and smaller chunks, and each time I enjoyed myself, whether I managed to see anything new or not. While this is partly because of the way progress is set up in the game, it’s more because of the fact that at the core ScourgeBringer is a lot of fun to play. There’s a similar sensation to the game that I felt while playing Dead Cells, and though the environments in ScourgeBringer are typically more enclosed than Motion Twin’s title, this actually works in ScourgeBringer’s favor because of the way that combat works in this game. There’s an emphasis on airborne juggling and movement in ScourgeBringer’s combat that encourages fluid movement and split-second decision making, and it feels like you’re constantly identifying threats and moving to remove those threats before they can cause you harm.

Because the majority of ScourgeBringer’s battles are close-knit affairs, your best hope of success is to always be on the move by wall-running, dashing between enemies and using the environment as cover. There are close to eighty enemies in total within the game, with attacks varying between ranged and melee, and so you’ll often need to be on your toes to make sure that you’re able to clear a room in optimal fashion. Each world that you visit contains a new selection of enemies to defeat and when combined with the difference in visual style and world requirements, there’s a solid learning curve within ScourgeBringer that requires you to quickly become comfortable with what Kyhra can do. Thankfully, there’s frequent opportunity to improve her skills and abilities by spending Judge Blood, which can be earned by defeating bosses. 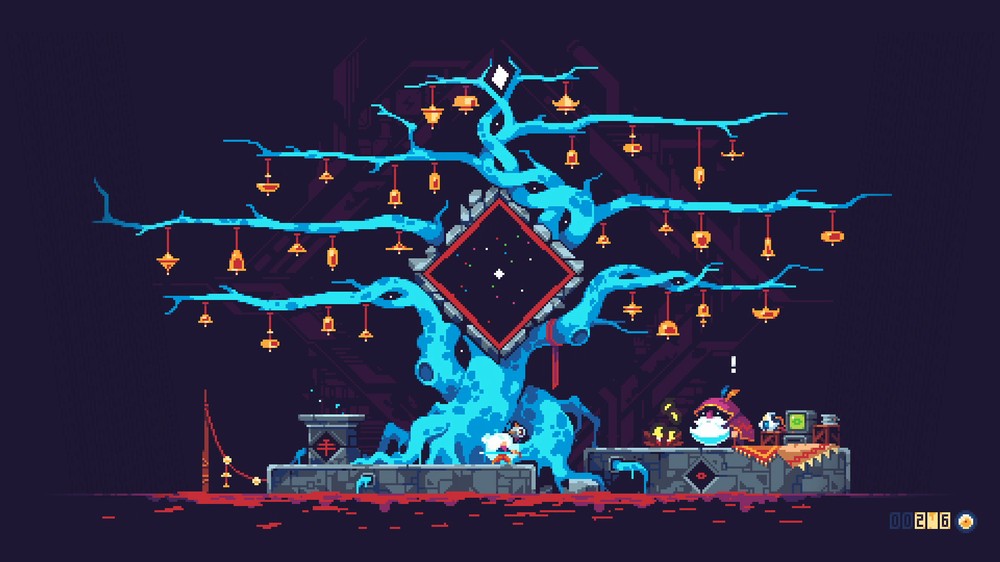 Each time Kyhra dies, she returns to the Chiming Tree, which is where she can gain new skills and unlock passive upgrades to her abilities. Some of these start off relatively simply, such as an increased health bar or stronger attacks, but you’re also able to unlock a combo system and the ability to fast travel within worlds. As well as these permanent changes, each run offers the opportunity to earn more temporary changes to Kyhra’s arsenal, and it is here where ScourgeBringer goes some way to making each run feel different and unique. These perks are sometimes dropped by regular enemies and always dropped by bosses, and it’s also possible to find extra bonuses by thoroughly exploring each world. Because of the way these upgrades can affect a run, it’s easy to feel as though perhaps the next run will work out differently and so ScourgeBringer encourages the player to try just once more, in an effort to get to the next room or to defeat the boss that was presenting a problem previously.

While ScourgeBringer could be accused of not really bringing much new to the table, it has to be said that what it does do is done to a high standard and presents a thoroughly enjoyable experience. Combat feels responsive, frenetic and fluid, and while there is a hint of chaos you never truly feel out of control regardless of how many enemies are on the screen at one time. It also has to be mentioned that ScourgeBringer contains a number of accessibility options for players, including being able to control the speed of enemy projectiles and the frequency of health drops. While it doesn’t contain difficulty levels, these options go some way to allowing the player to tailor the experience to their own preferences and are certainly a welcome and noteworthy inclusion.

Though ScourgeBringer doesn’t yet present a fully complete experience, there is a sizeable amount of content here, and more than enough to gain a good impression of what the final game will look like. It’s not revolutionary and there isn’t much here that stands out from other games of a similar ilk, but it has to be said that ScourgeBringer knows what it is and does a great job of showing itself off. I played with a smile on my face for the majority of my time with the game and would happily return time and again for a run or two when the mood strikes. ScourgeBringer is well worth a look, and I’m excited to see how the game looks when fully finished. 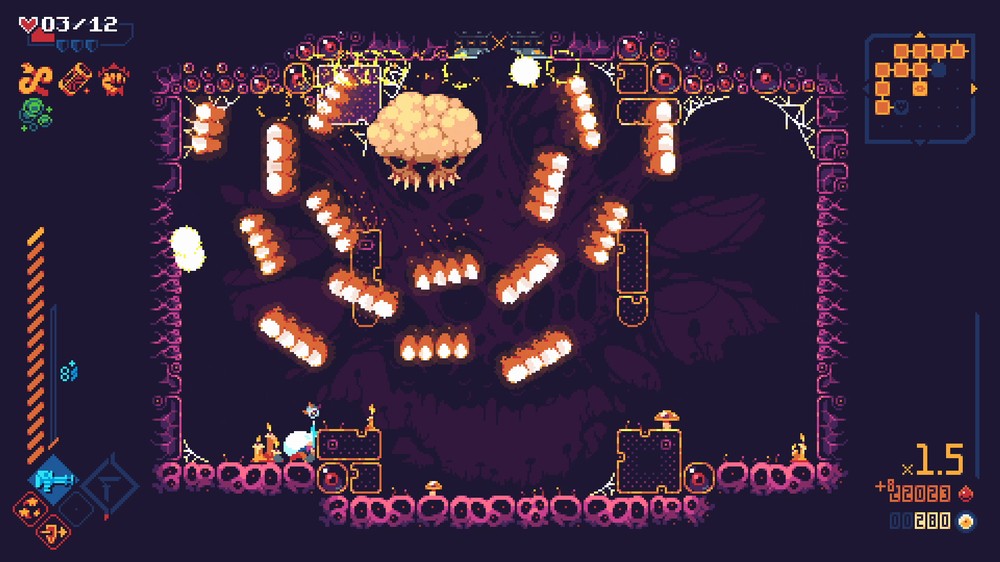 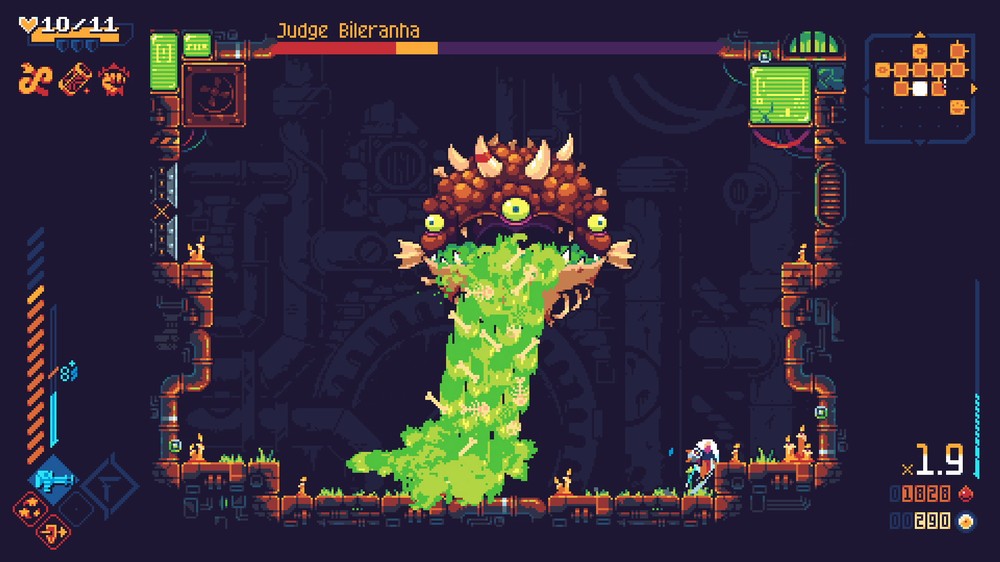 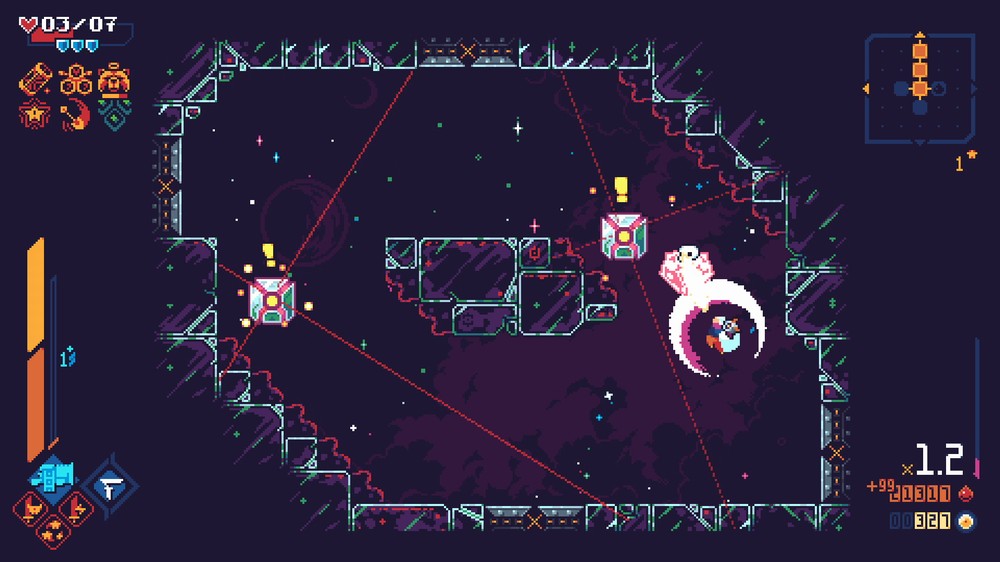 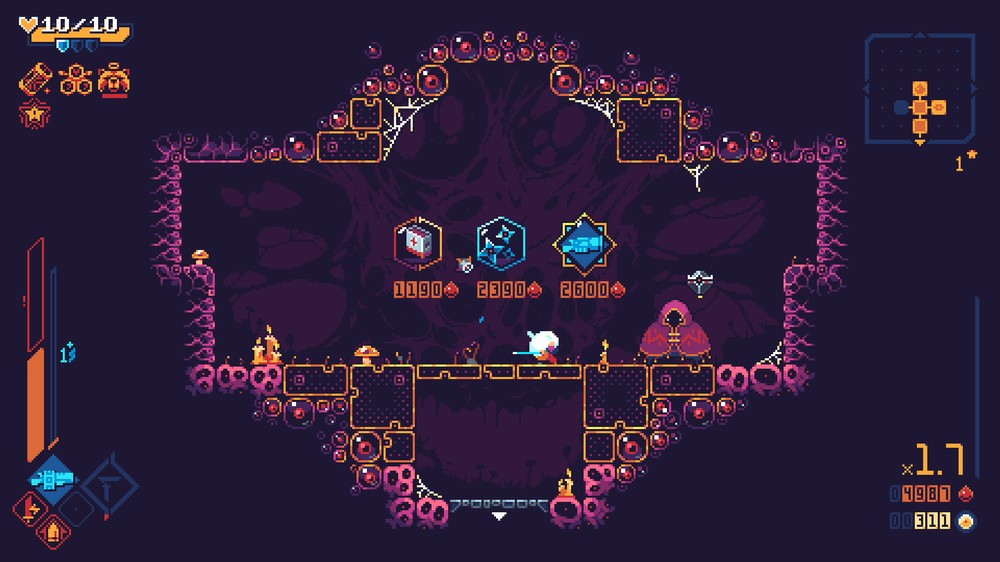 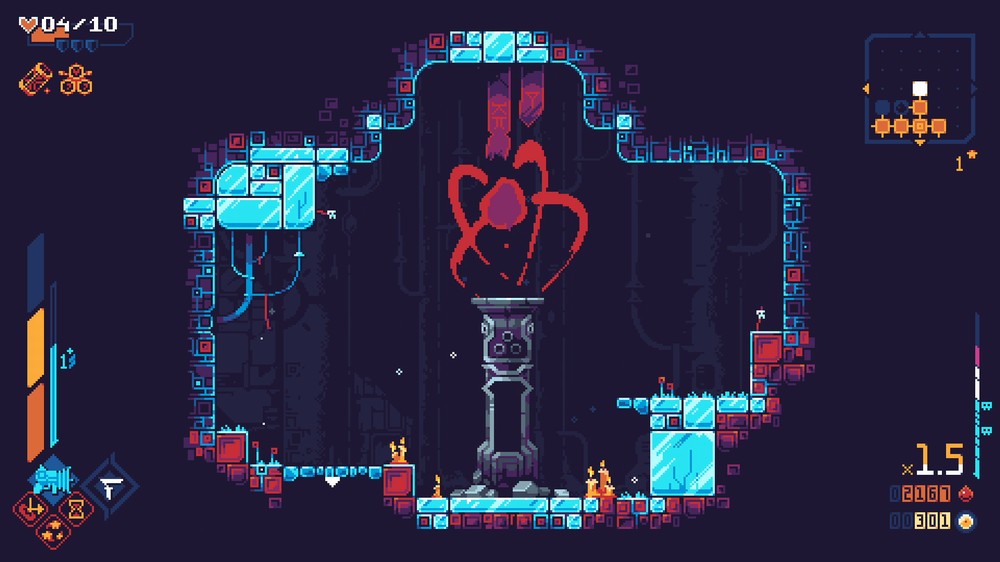 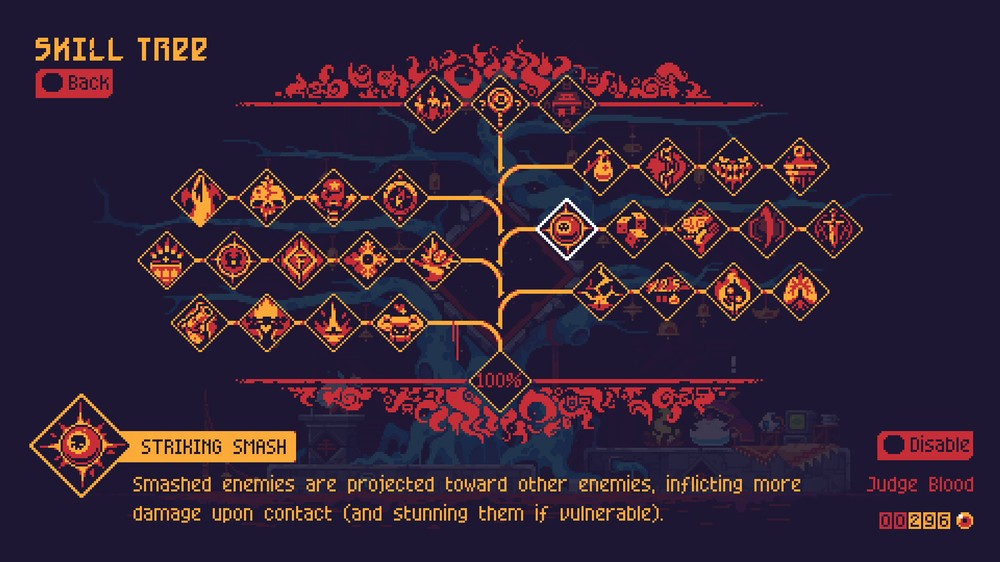 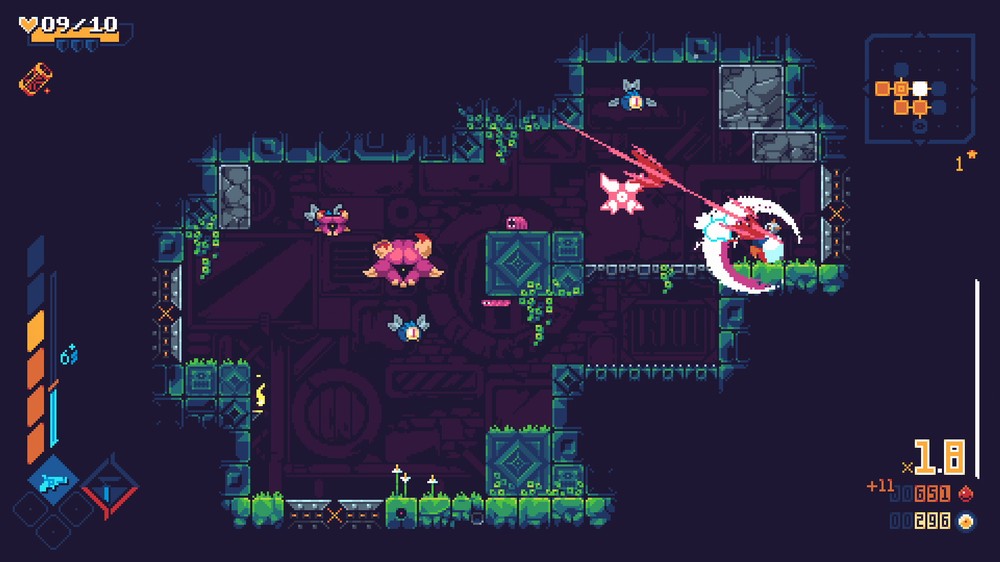 1
836
The Walking Dead: Saints & Sinners Review – Oculus Quest
2
738
The Falconeer First-Look Preview – PC
3
738
Werewolf: The Apocalypse – Heart of the Forest launches on October the 13th
4
738
Worm Jazz Review – PC
5
738
Take to the Skies and Choose a Side in the New Trailer for Next Generation Air Com...
6
737
Frictional Games Shows Off First Gameplay Footage of Amnesia: Rebirth
7
737
Join the Galaxy’s Finest as Star Wars™: Squadrons Soars Into Homes Today
8
737
Metamorphosis is 33% Off on Steam!
9
737
Synth Riders Celebrates Anniversary with a Month Full of Treats and an Oculus Ques...
10
737
CRASH BANDICOOT 4: IT’S ABOUT TIME IS AVAILABLE NOW
All Original Content on Game Chronicles is Copyright (c) 2002-2020
Sinjin Solves Walkthroughs Copyright (c) 1996-2020 by Mark Smith