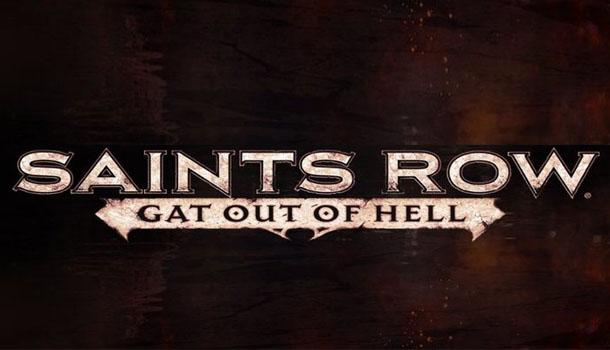 Disappointing waste of time for the developers and players.

Saints Row: Gat Out of Hell is the new standalone expansion to the 2013 hit, Saints Row IV, which is now available as an individual digital purchase on console and PC, or as part of the new remastered version of the game for next-gen consoles, Saints Row IV: Re-Elected.  While having played Saints Row IV certainly isn’t a requirement, it will help with some of the insider jokes and conversations that take place in this expansion.

We meet up with the surviving Saints, still on their stolen alien spaceship and celebrating Kinzie Kensington’s birthday.  The party is going great until somebody breaks out an Ouija board and opens a portal to hell.  The President is sucked into the vortex by Satan, doomed to be the unwilling husband of his daughter Jezebel, forcing Johnny Gat and Kinzie to mount a rescue team.  Thus begins (and sadly ends) most of the story content for the upcoming 8-10 hours you’ll be spending in hell.

Gat Out of Hell has some great ideas but none of them ever go anywhere.   The only thing remotely original in this standalone expansion is the ability to sprout angel wings and fly – a surprisingly addictive mode of travel that trumps the President’s jump and glide abilities from the core game.  Once you’ve upgraded all the stamina, speed, agility, and flapping variables you’ll likely spend most of your time in the air.  And when combined with the blazingly fast ground sprint speed, cars have once again become obsolete outside of the very first objective and some Armored Truck Heist missions.  You’ll never need or use a car in Hell. 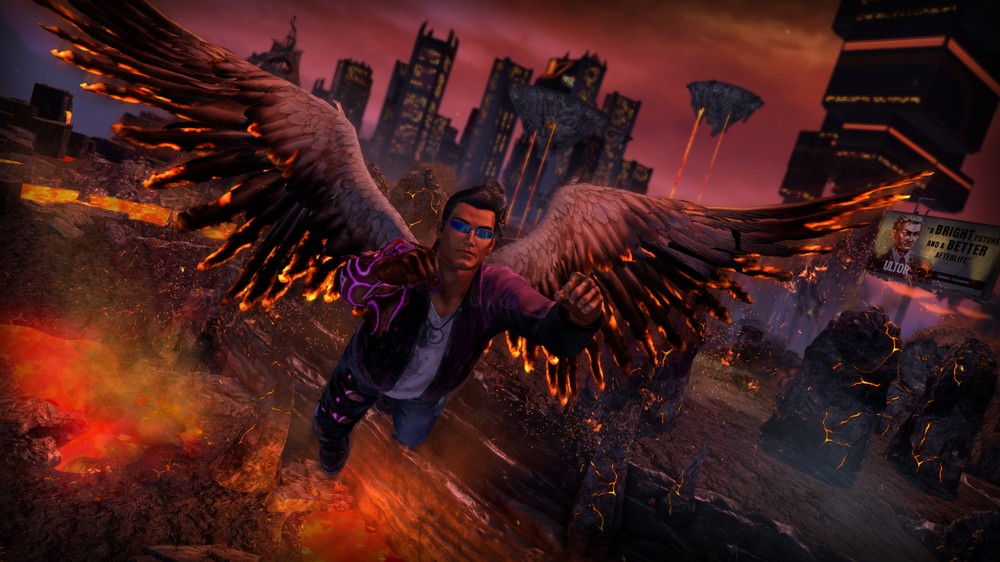 Sadly there is very little story and even less story-related missions.  Nearly all of Gat Out of Hell consists of challenges and activities; most of which are satanic re-imaginings of the same ones you did in Saints Row IV.  Instead of racing around Hell on foot you now have flying races.   Instead of insurance fraud you still throw yourself into traffic to take damage but now it’s to shave years off your eternal doom.  Instead of capturing alien towers you now take over Marshalling sites and instead of defeating Wardens to bolster your powers you now visit Altars and complete various power-based challenges.

What little story there is revolves around three individuals; Blackbeard, Shakespeare, and Vlad the Impaler.  You’ll meet these three entertaining damned souls and complete an initial mission followed by a loyalty mission, which is basically a laundry list of regular activities and challenges strung together.  It’s similar to the loyalty missions you did in Saints Row IV for your rescued Saints, but at least in that game they actually helped you in the final mission.  Here, it is just you and Kinzie in the end.

You are able to switch between Johnny and Kinzie at any time during the game, but this is mostly superficial, merely switching character skins and voices.  Each character does have numerous discoverable commentary pick-ups and there are challenges for playing each character for a certain amount of time, so it does pay (a bit) to play as both.  It is distracting that all of the cutscenes feature Johnny, so if you are playing as Kinzie it gets a bit weird. 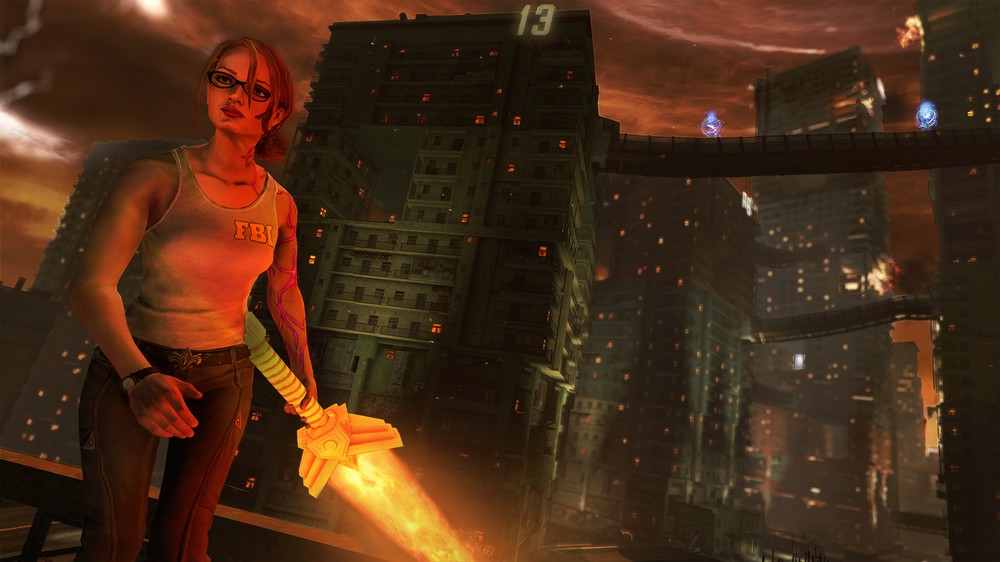 I’ll admit to laughing quite a bit; especially at the realization that Shakespeare was a hack and he sold his soul to Satan to become as famous as he is, and now he is a popular club DJ in Hell spinning vinyl while carrying around a flaming skull and speaking all poetic and stuff.  Blackbeard is also kind of cool, and I enjoyed his hidden chest challenge that required finding three symbols to unlock each of five chests.  Vlad wasn’t nearly as amusing, but I did enjoy the Pledge activity that was founded at his university.  This mini-game has you running around smacking demonic frat jocks into portals with a Greek hazing paddle.

Ultimately, Gat Out of Hell is a more-of-the-same grind that will have you collecting a thousand-plus soul bubbles to enhance your powers, looting money to purchase weapons and upgrades, and once you unlock the ability to see collectibles on the map the game turns into one giant housekeeping chore.  Even Kinzie remarks, “This isn’t good for my OCD.”  I’m with ya girl.  Once again you can play the DLC co-op and there are co-op specific activities and challenges for you and a friend.

The single best moment in the game is a South Park-inspired musical number where Satan, Jezebel and even our heroes break out into song.  Sadly, that video was released prior to the game, so many have already seen it.   I saved the final battle with Satan until I had completed all of the collecting and upgrading, which was a big mistake.  I was so overpowered the final boss fight lasts only 2-3 minutes and is anything but challenging.   I repeated the boss fight four more times just to see all five endings, and the entire experience only took 15-20 minutes including skipping credits and traveling back to Satan‘s palace.  If you want any sort of challenge then battle Satan as soon as the opportunity presents itself.

Personally, I found more story content and overall enjoyment in the Enter the Dominatrix and How the Saints Save Christmas DLC that now comes with the Re-Elected game.  Gat Out of Hell is a clever concept without the story to back it up.  Activities and challenges are fun diversions when they are part of a bigger game, but when you rely on them for all of your content; even going as far as to make them sub-parts of your story missions, then the whole thing just turns into a grind-fest and a time-waster.   If you are getting this expansion as part of the Saints Row IV: Re-Elected bundle then enjoy your bonus content; otherwise my advice is to watch Satan’s musical number on YouTube and skip Gat Out of Hell; at least until it drops to $10 or less, which is all it’s really worth. 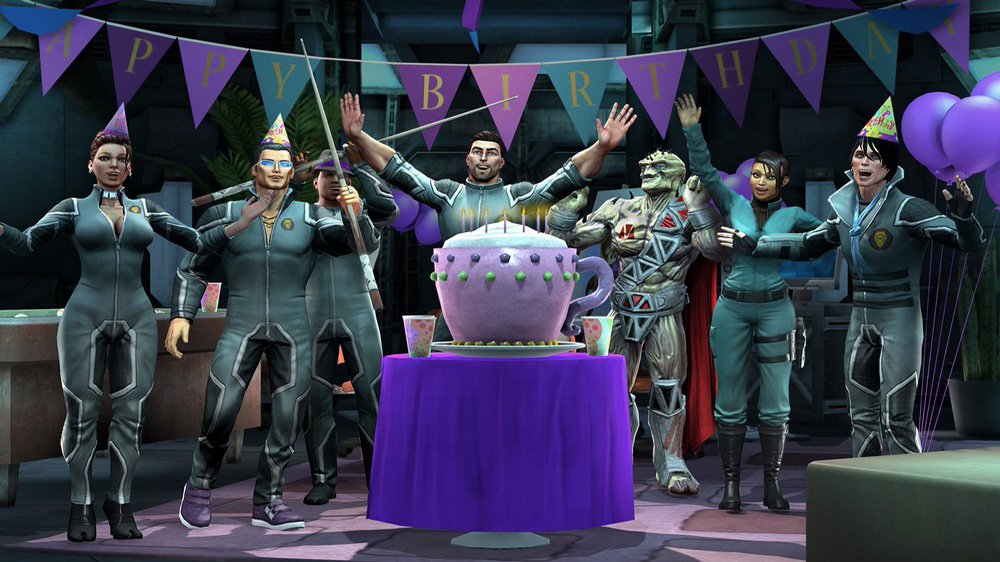 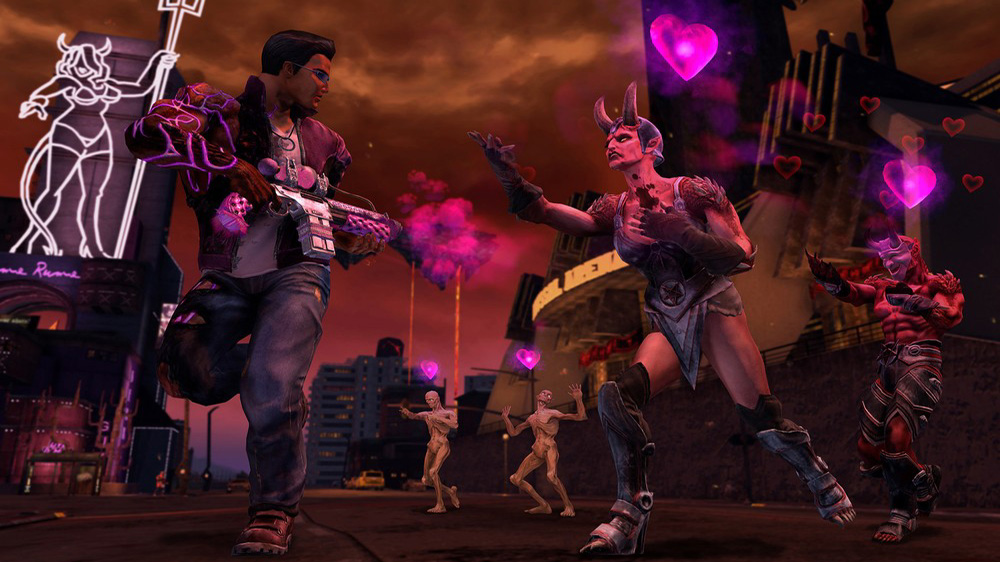 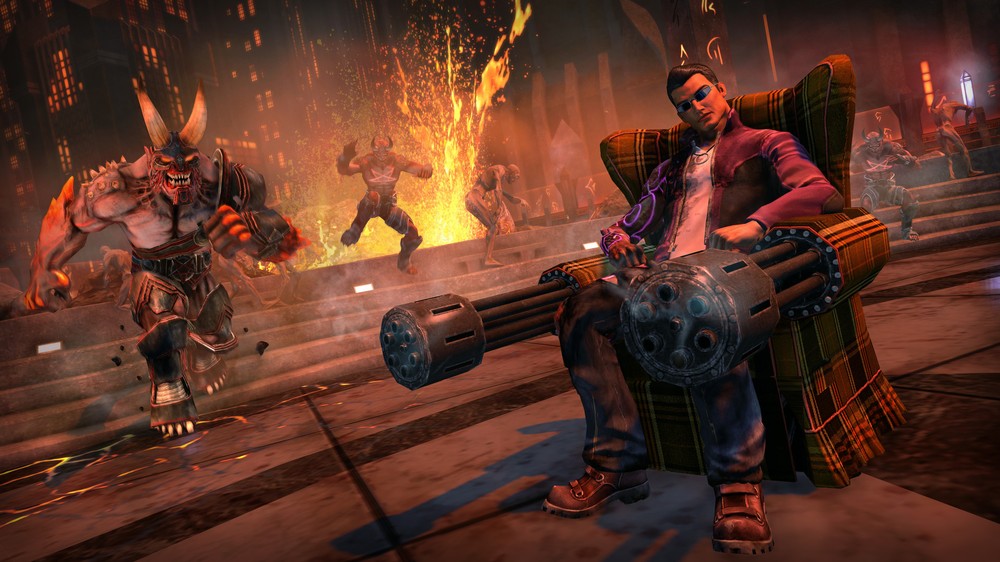 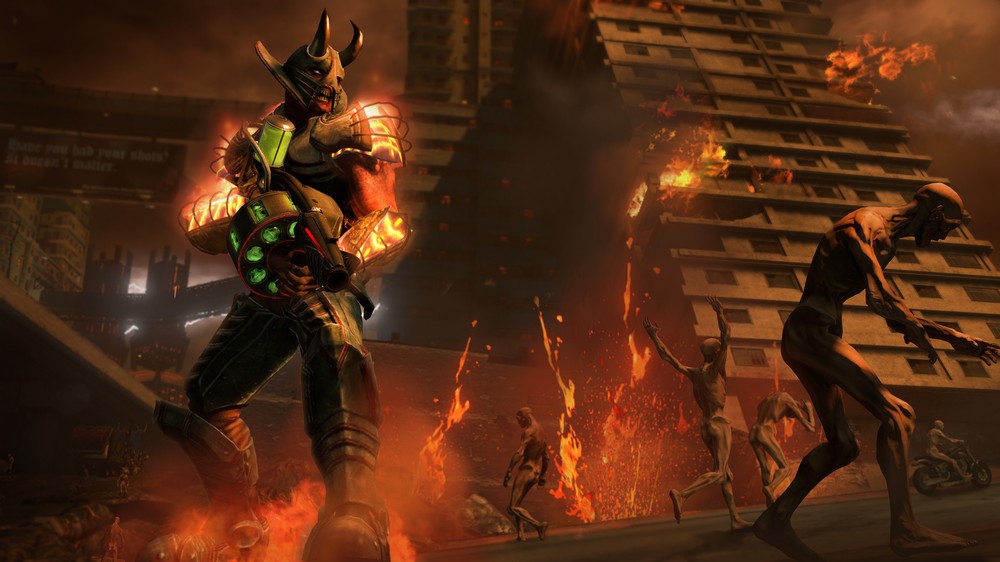 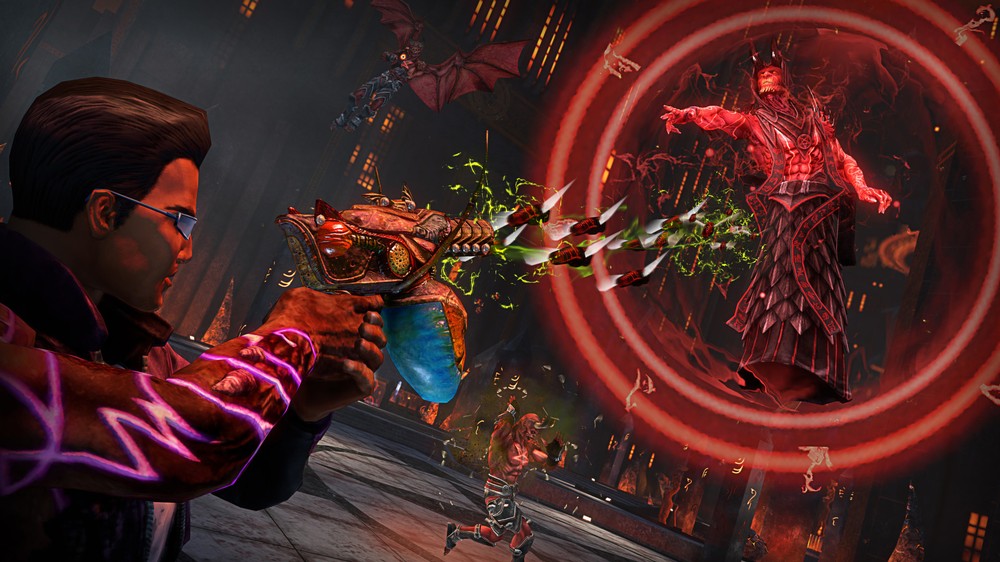 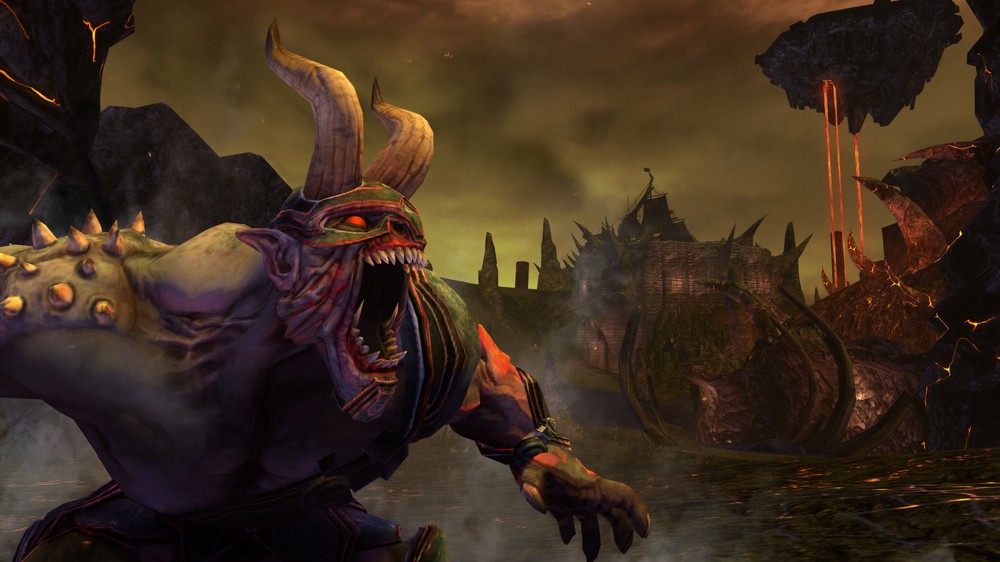 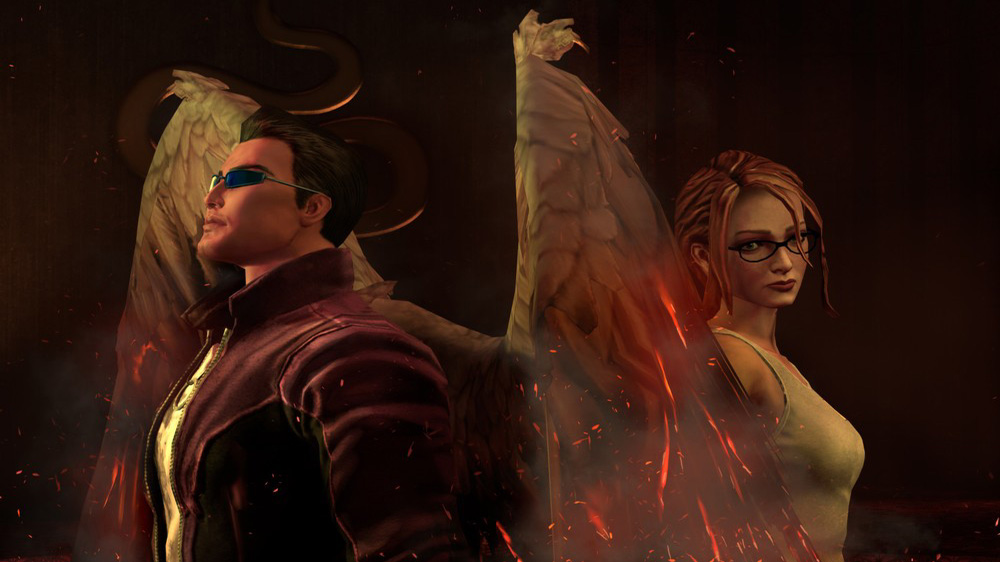 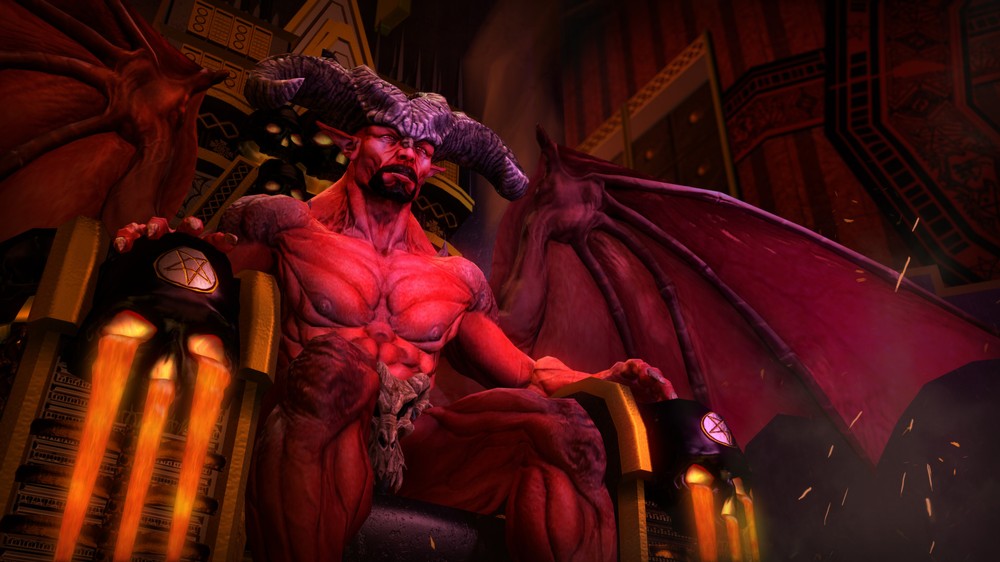