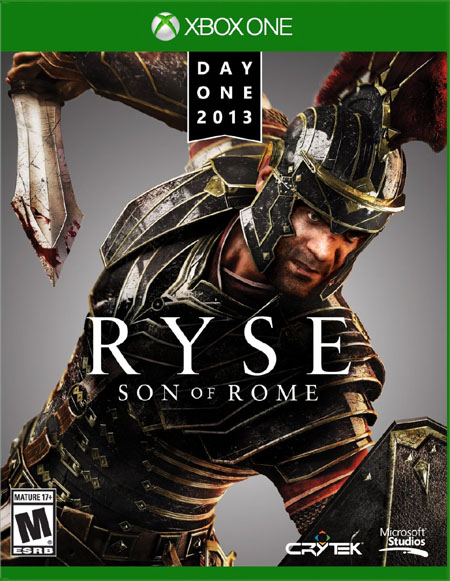 Ryse will blow your mind for the first hour before lulling you to sleep with its repetitious and pointless gameplay.

Ryse: Son of Rome is one of the “big three” launch titles for the Xbox One, and while early gameplay demos and videos had me feeling a bit skeptical, the final game has certainly turned out better than I had hoped, but is still sadly lacking in a few critical areas.  Developer Crytek has put the power of their latest CryEngine to work along with the power of the Xbox One hardware to deliver a game that is visually striking; a game where cutscenes and actual player-controlled gameplay are seamlessly meshed into one continuous experience.  Perhaps that is why, for much of the game, I felt like I was merely in control of one giant cutscene.

In Ryse, you’ll play as Marius, a celebrated soldier-turned-centurion as you partake in battles to save Rome as well as taking the fight to the barbarian hordes on the front lines.   Things take a turn for the dark side when your family is brutally murdered, and new characters and plot twists start to shatter your reality, but no matter how compelling the story manages to get at times the gameplay slips into a rather repetitive button masher that won’t even begin to present a challenge until the final chapters of the game. 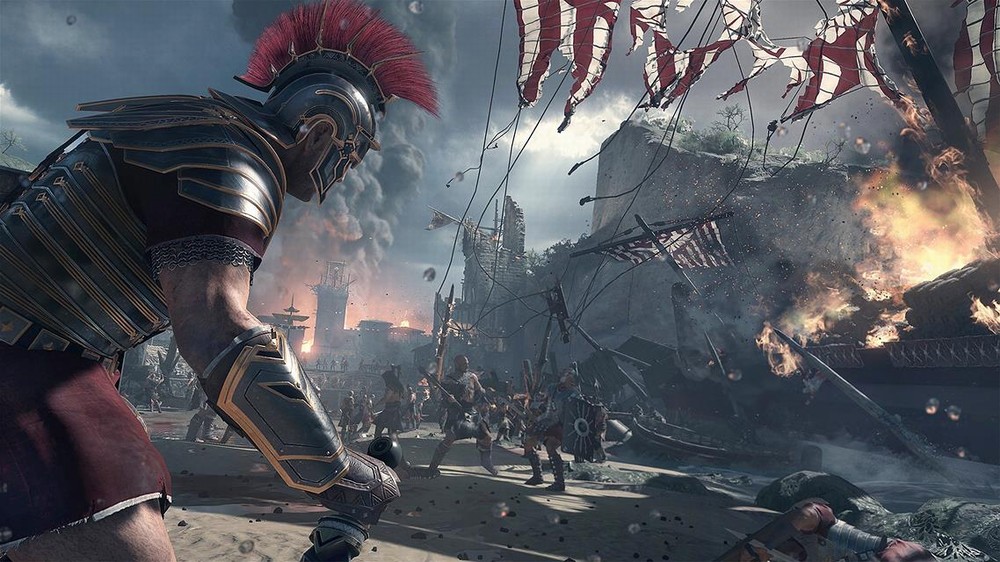 Ryse borrows on the combat system born from the Batman Arkham games with light and heavy attacks, a timed counter move, and eventually an execution icon that will trigger a stylishly violent fatality.  The interesting element here is that rather than presenting you with a sequence of annoying button prompts, your target will glow with the aura of the corresponding gamepad button colors, essentially turning Ryse into a series of Simon games.  I’m not sure how this works for color-blind gamers.  The big issue here is that it can take you quite some time to kill an opponent without using a fatality, so the urge to use them with every kill is great.  But when you factor in that there are only a dozen or so of these animations and only a half-dozen enemy types and you are going to be killing hundreds upon hundreds of enemies over the course of the 6-8 hour campaign, things are bound to get repetitive before you even make it out of Rome.

Speaking of repetitive, aside from Marius the game has a disturbing lack of original character models, which means that you will be seeing a lot of familiar faces on the battlefield.  It’s even worse when you are fighting the same enemy types in the same melee at which point this game could easily be renamed, The Clone Wars.  Crytek has done some amazing work in creating some of the best and most lifelike humans that stand up to even the closest facial scrutiny in cutscenes, but obviously this level of detail comes at the expense of variety.  Likewise, CryEngine does an impressive job of recreating detailed cities and realistic environments that will have you assaulting and defending cliff-side fortresses or exploring lush forests and sinister swamps.  The terrain detail combined with lighting, shadows, and particle effects is quite impressive and the very definition of next-gen.

Ryse does try to deliver a few breakaway moments from the normal cycle of button-mashing.  In some instances you’ll be in command of a legion that slowly marches forward while periodically raising their shields to block incoming arrow, much like a certain scene in 300.  Another great moment has you defending a fortress from incoming forces by kicking back ladders and smashing siege towers.  The game even incorporates some good use of the Kinect so you can verbally shout commands to your troops rather than wait for the lengthy button-hold input to do the same action. 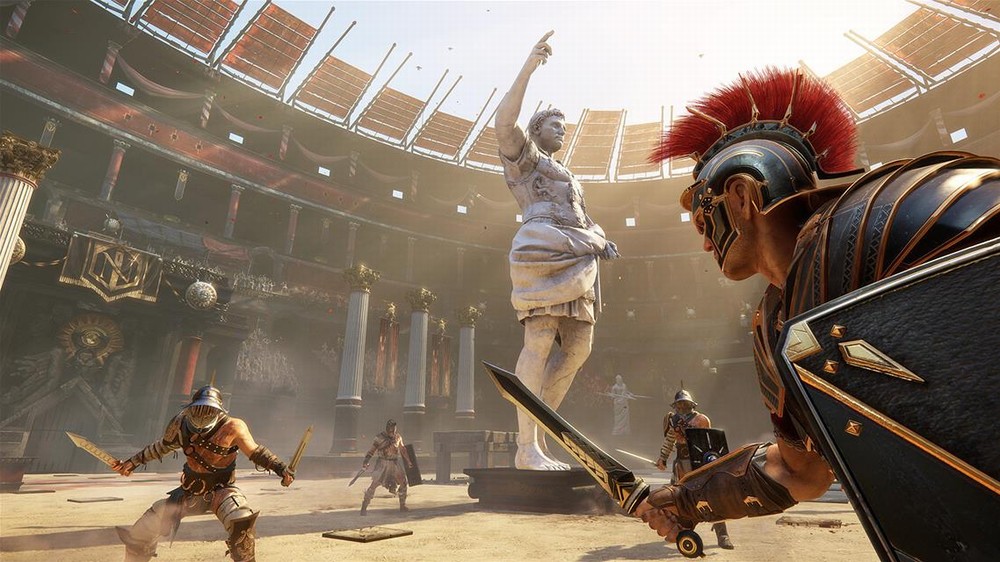 Those looking for some epic Roman legion multiplayer will have to settle for the Gladiator co-op mode (online only) but that entire part of the game is less than enjoyable due to a slow leveling-up and loot system that encourages an endless cycle of more of the same repetitive combat you are likely already tired of from the main game.  There is an impressive amount of weapons and armor to tempt you into hours of mindless mediocrity, but most items offer nominal stat perks given the time it takes to earn anything.   Of course Microsoft is there for you if you don’t want to grind through the game, and you can purchase in-game gold with real-world cash to buy those various random loot packs.   As with a few other Xbox One games, Microsoft seems to be using this randomized reward system forcing players to buy these mystery prizes, so instead of buying the sword or armor you really wanted you will get random items that you may not want or already have.

Ryse: Son of Rome is a visual masterpiece and a fabulous showcase title for the Xbox One, but much like these mega-million dollar summer blockbuster movies, visuals can only get you so far.  You need characters and a story you really care about and Ryse has neither.  Marius clichéd revenge tale devolves into a repetitious cycle of button mashing and quick-time fatalities that will have you mentally “checking out” about halfway through the game.  Thankfully, Ryse is as short as it is shallow, so at least you won’t have any trouble making it to the end of this ambitious yet fatally flawed launch title. 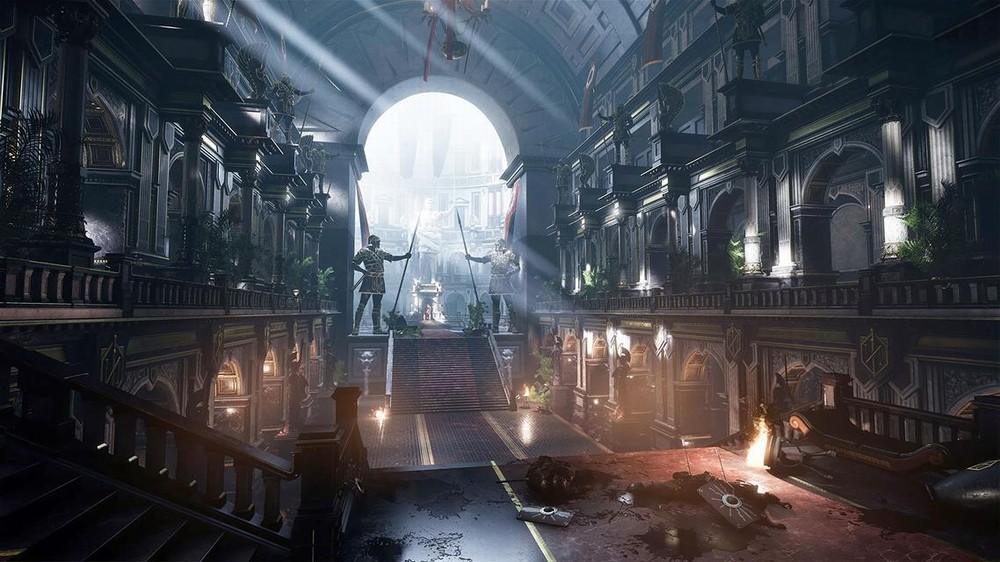 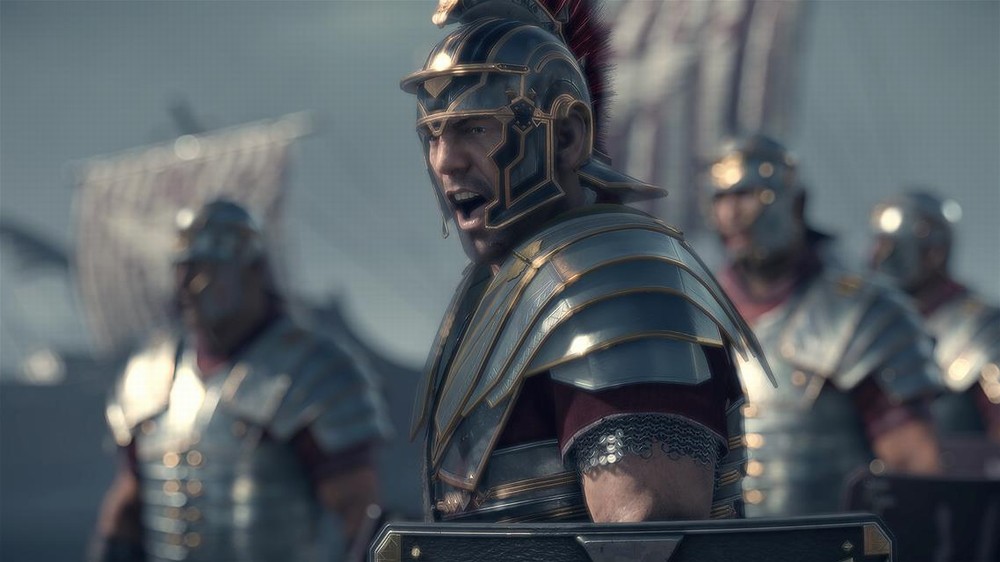 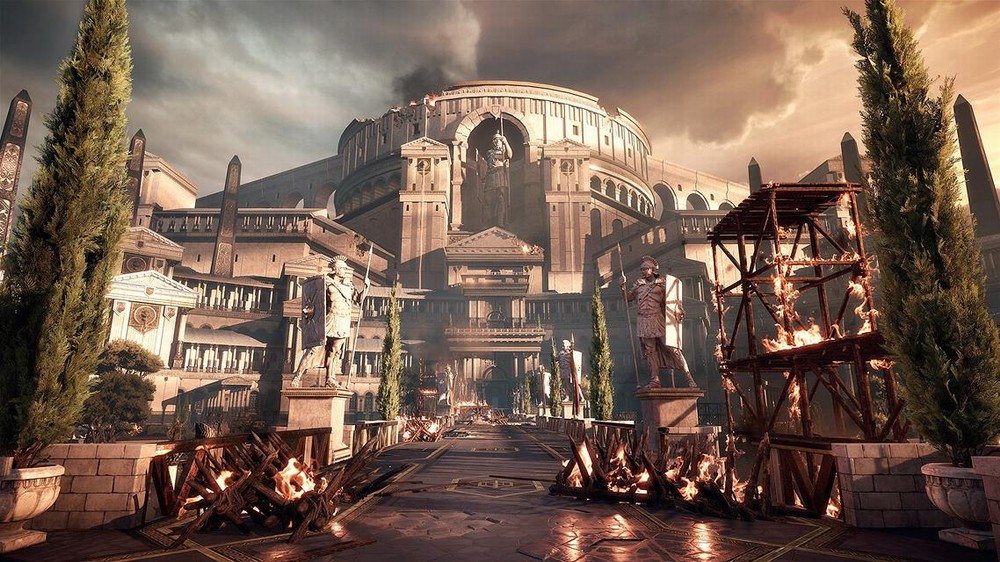 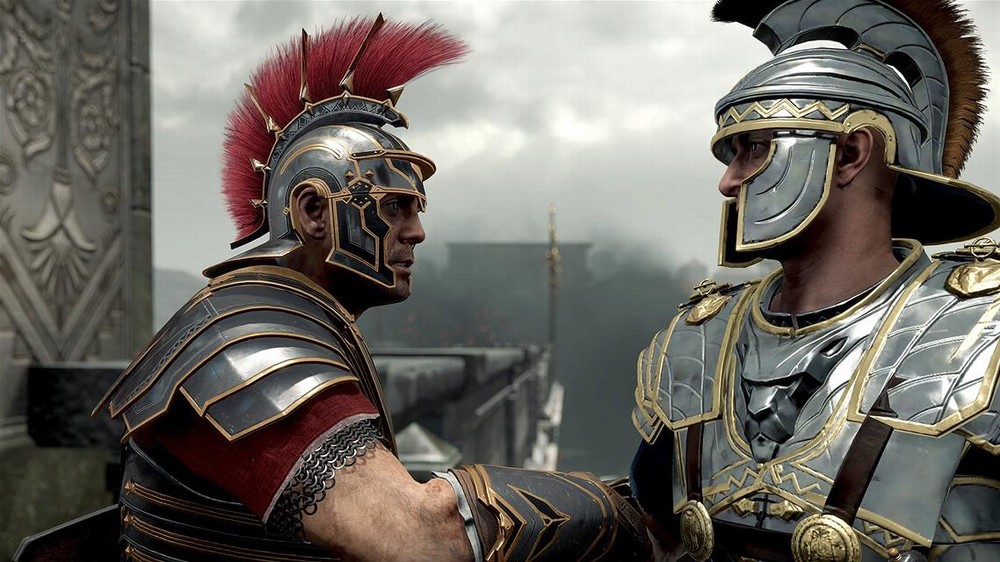 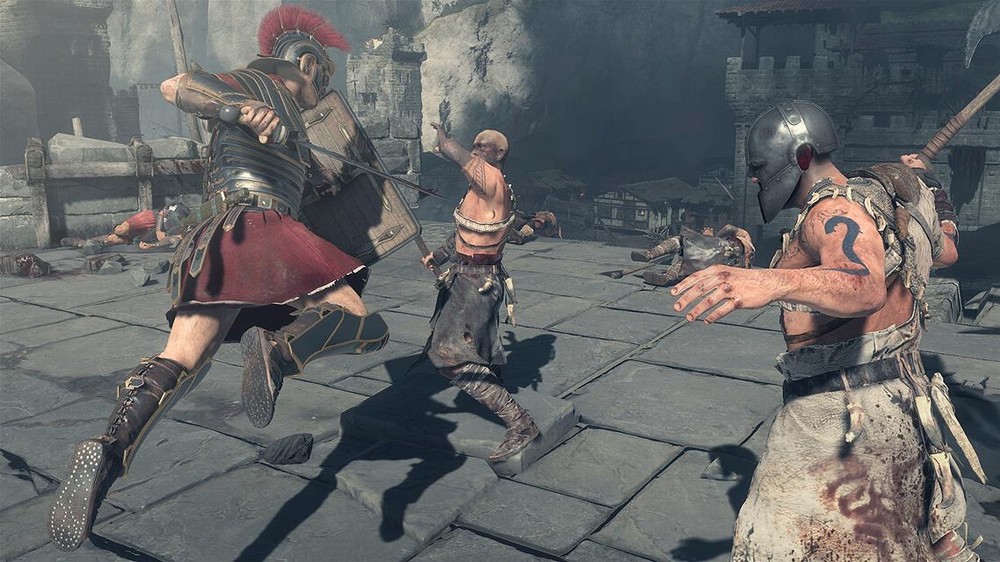 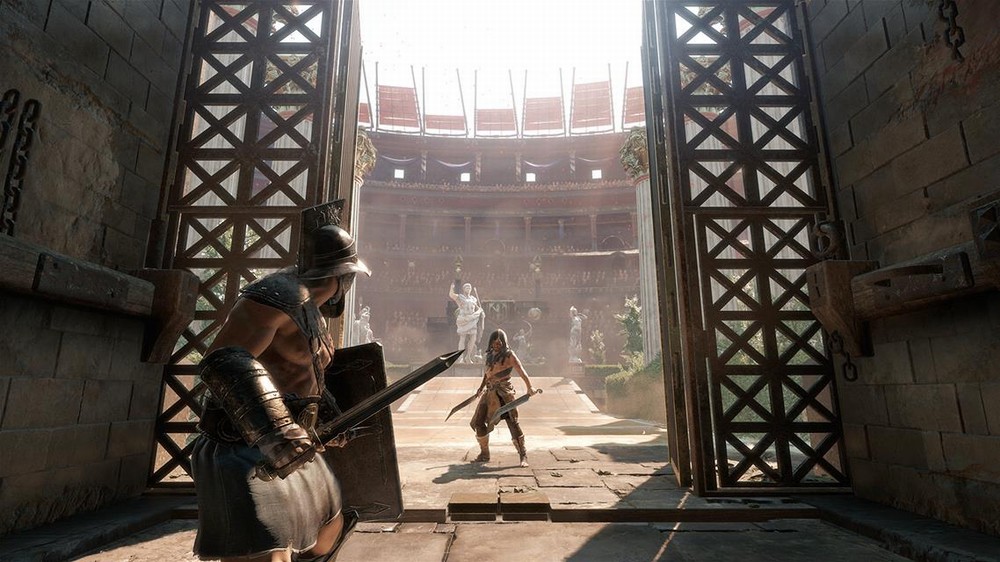 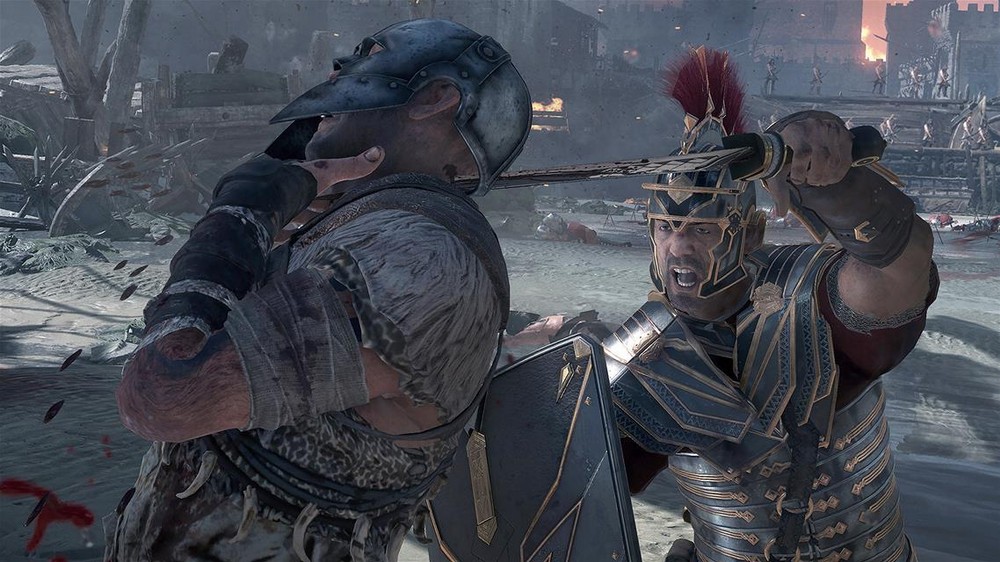 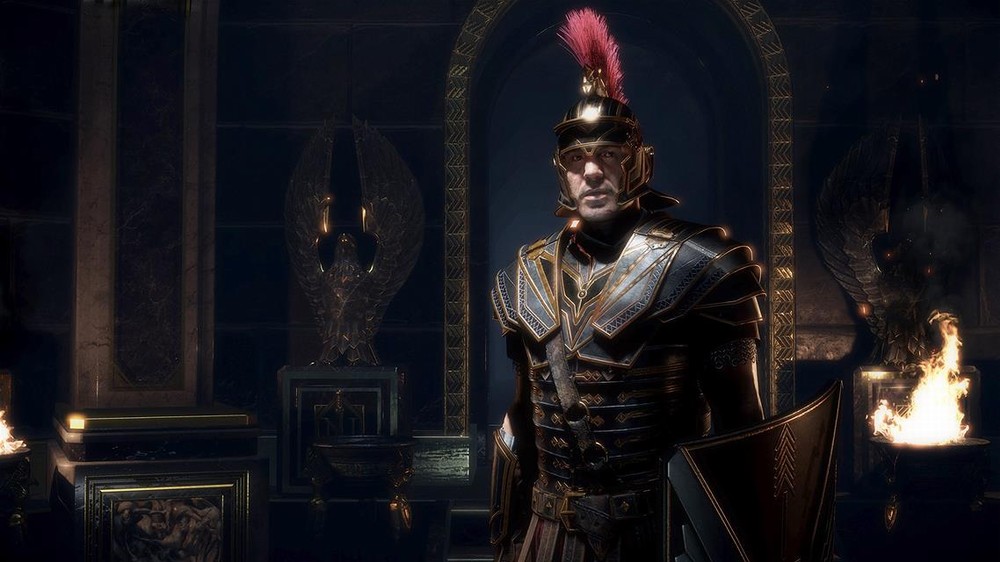