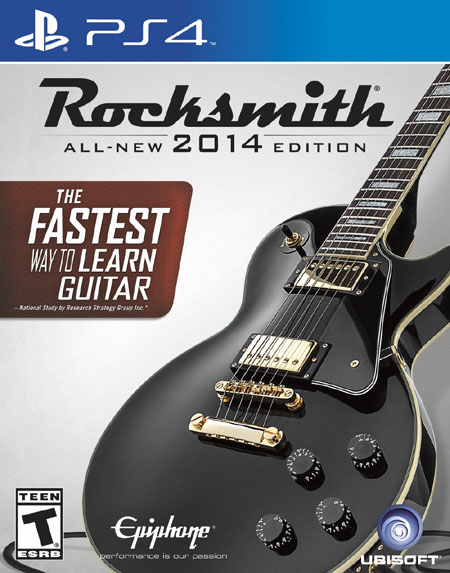 Delay is back...and it's not the good kind.
$79.99 for a year-old game.
Vita Integration is Useless.

Rocksmith still reigns as the king of the real-guitar music games.

Upon its release in 2011, Ubisoft’s Rocksmith franchise effectively changed the face of music-based gaming by eschewing the then-standard plastic button-based peripherals for real wood-and-strings electric guitars.  This was achieved though some incredibly high tech software and the use of a specialized ¼” Phono Plug-to-USB Realtone Adapter cable, and was a bold (and expensive) gamble for Ubisoft in a gaming genre that was already on the decline.

The original Rocksmith proved to be the perfect melding of music and gaming; an experience that was equally as entertaining as it was educational.  It offered plenty of challenge for musicians of all levels, and the overall sense of reward was hindered only by an awkward navigation system, a bit of troublesome audio latency (especially on high definition televisions using HDMI), and a steep (yet fair, in my opinion) price point.

Ubisoft delivered the follow-up to the original with Rocksmith 2014.  Sporting the tagline “Learn to Play in 60 Days,” the new release aims to upped the ante from the original – adding a handful of unique gameplay modes while attempting to address all of the issues from the first game with an improved interface, adaptive difficulty, and a revision for the Realtone Adapter that addressed issues some were experiencing with audio latency.

A year after its initial release, just in time for the holiday season, Ubisoft has decided to re-release Rocksmith 2014 for the new generation of consoles.  The pricing structure for Rocksmith 2014 is the same as it was last year $79.99 with the Realtone Cable.  It does not appear that a Guitar Bundle is being offered this time around. 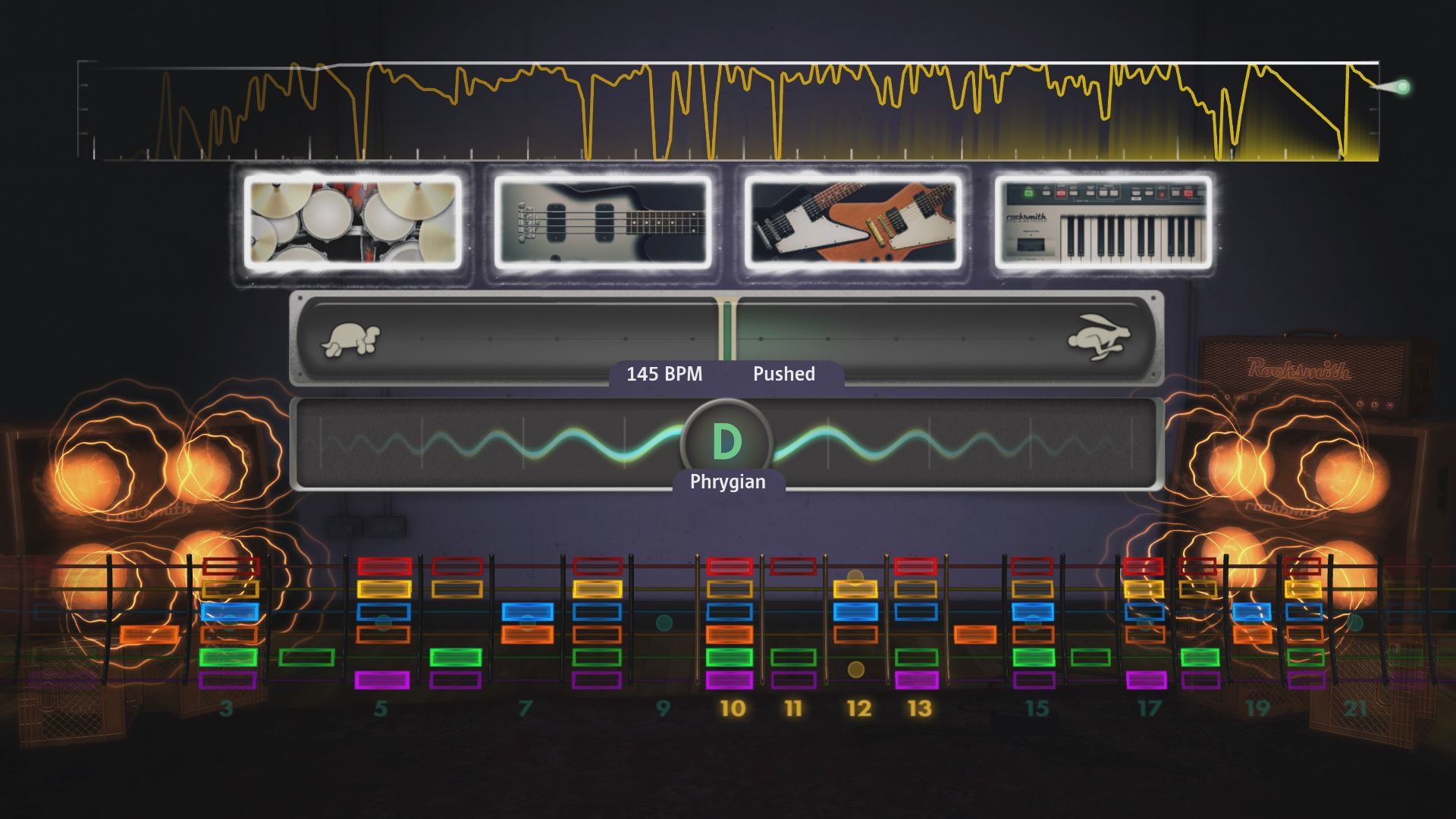 For those new to the Rocksmith franchise, the games (lessons?) play much like the Harmonix classics Guitar Hero and Rock Band, in which gamers match notes of a song as they drift down the “Note Highway” and cross a threshold relating to the proper sequencing within the song.  But where Guitar Hero and Rock Band displayed the color-coded buttons on the frets of plastic guitar peripherals, Rocksmith instead displays the neck of a six-string guitar.

Given the fact that the guitar neck is also broken up into fourteen-ish playable (frets) which can be selected by four playable fingers, that means that gamers technically have (6 x 14 x 4 = ) 336 different possible fret/finger combinations at any given time.  While this may sound overwhelming, Rocksmith 2014 does an excellent job in providing a robust and rewarding learning process for gamers of all skill levels.

The game starts by delivering only the most basic closely-spaced single-string notes, then dynamically begins to increase the difficulty to the level it deems appropriate based on the gamer’s ability.  Gamers can manually change the difficulty up or down on the fly with a controls-slider systems that seamlessly modifies songs by adding or subtracting increasingly complex note structures.

Because the gamer is playing along to a backing track of the actual song, this method allows even the newest of newbies to feel as if they are rocking along in a band, even if they are just plucking a single string – which is infinitely more rewarding that plucking away to a metronome and practice amp in the bedroom, if you ask me. 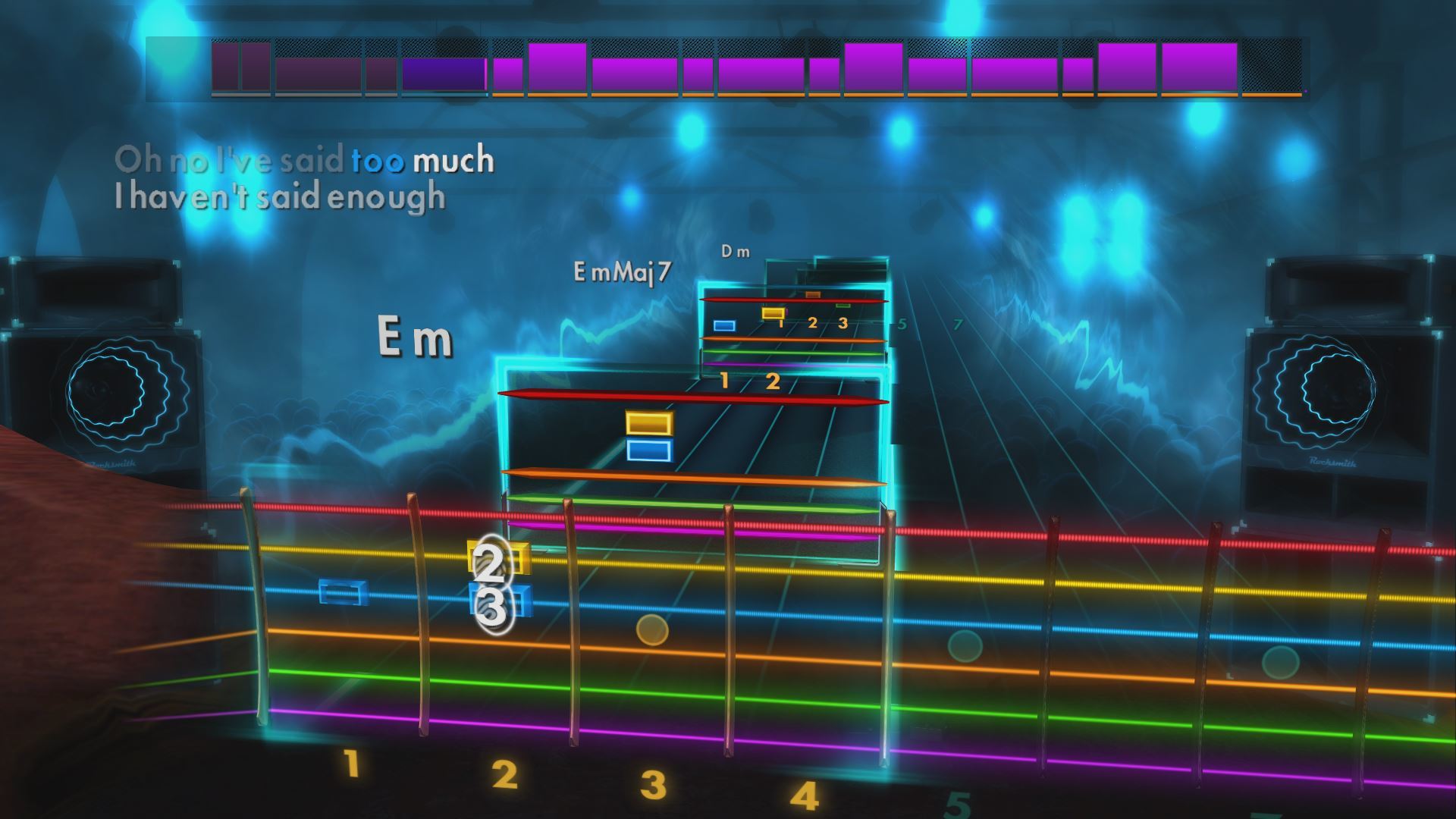 Riff Repeater allows the player to stop and replay through any part of a song and adjust the tempo and difficulty.  The segments are chosen by the gamer, and can be repeated over and over until the riff is mastered.  Gamers can then resume with the song at full tempo and shred away.  This is all performed pretty much on the fly and it really helps gamers focus on problem spots rather than having to restart a song constantly because of one particular stumbling block three quarters of the way in.

If gamers get particularly good a song segment, the game automatically kicks into Master Mode, where there are no notes listed at all and the gamer is entirely on his or her own.  This loosening of the musical noose is simultaneously liberating and fear-inducing, as gamers gain a real sense of accomplishment but newly added responsibility to carry the band through the segment with no visual cues.

A music game wouldn’t be worth its weight if it didn’t feature killer tunes, and Rocksmith delivers in spades.  With songs ranging from 60’s and 70’s guitar classics like Aerosmith’s “Walk This Way” to and The Kink’s “You Really Got Me,” to 1990’s era Indie Rock with Nirvana’s “Heart Shaped Box” and Weezer’s “Say It Ain’t So,” to newer music by the likes of The Shins’ “For a Fool” and Paramore’s “Splashh.”  Gamer’s cannot be expected to love every track in Rocksmith 2014, but with the variety included, regardless of what style of rock appeals to any given gamer, they will find something to connect with in Rocksmith 2014.

And if playing along to someone else’s tunes is not cutting it, gamers can always take a trip to the 80’s arcade styled “Guitarcade” and use their mad guitar skills to shoot down zombies in the House of the Dead inspired Return of Chordead, outrun the police in Spy Hunter inspired Scale Racer, or hunt enemy spacecraft in the StarFox inspired StarChords.  And that’s just for starters, as the game features 13 games in all, complete with online leaderboards.  Best of all, each game has been developed to place emphasis on improving a different aspect of a gamer’s guitar skills from fingering to chord shapes to overall touch. 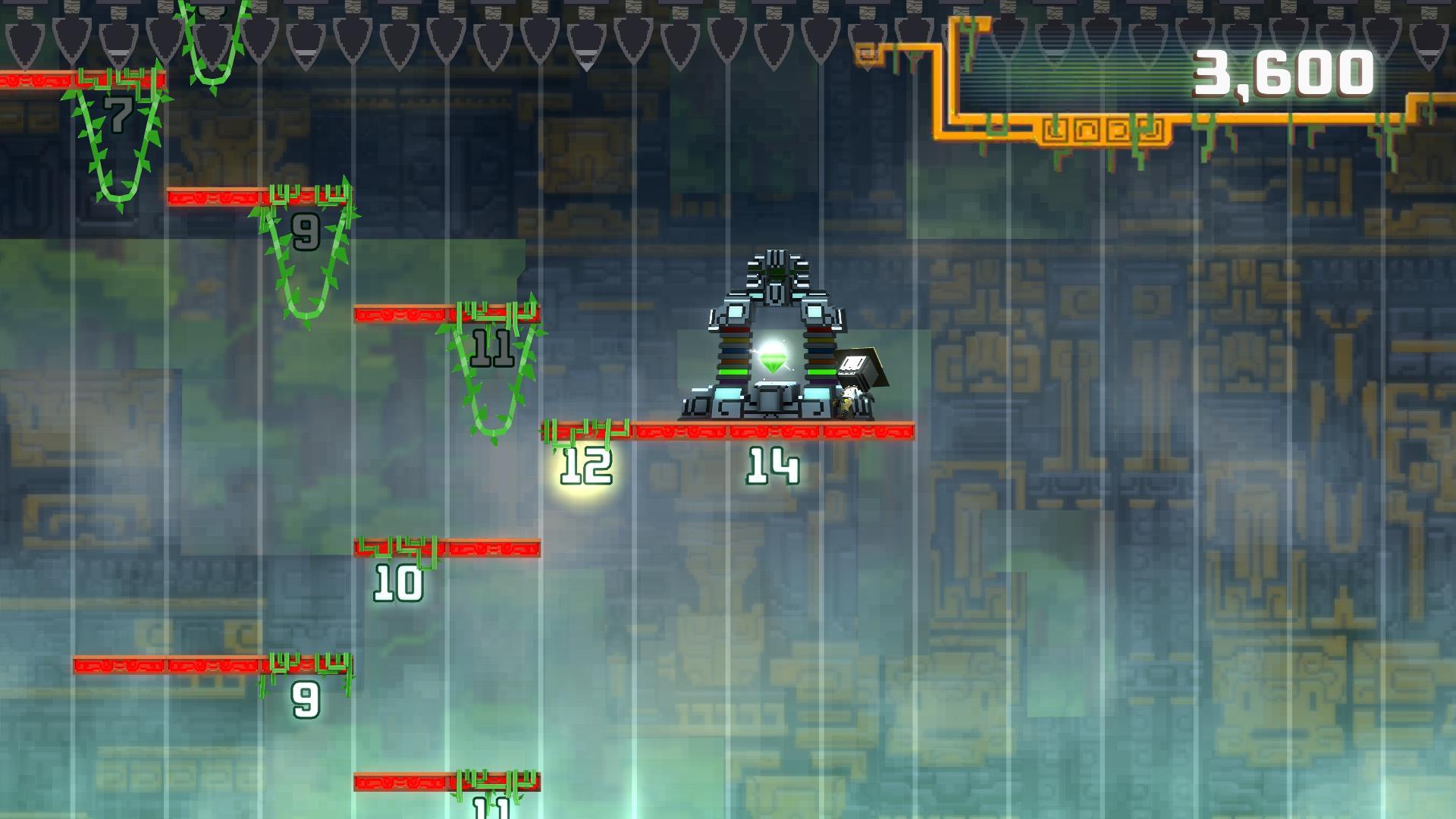 But probably the best feature is the game’s Session mode.  Session allows gamers to form their own session band using the game as backup for drums, bass and other instruments.  The player picks the key and the tempo, sets a basic song structure and simply begins to jam.  The game jumps in and plays along – it is simple, rewarding, and most of all a ton of fun.  As someone who does a lot of jamming alone (c’mon get your head out of the gutter…) having a backup band to jam really helped make practice enjoyable.

Once again, the price point might seem a bit steep for most gamers, but considering what you get for the money, Rocksmith is a real bargain.  At $79.99, the standard game is roughly $20 more than a typical new release, so one would naturally attribute that extra cost to the Realtone Cable.

While that might sound a bit on the high side for a single cable, bear in mind that most beginner guitar lessons will cost $15 – $30 per hour it only takes a few hours for Rocksmith 2014 to pay for itself.  And believe me, the hit song-based lessons that gamers will experience in Rocksmith are infinitely more enjoyable and educational than the customary “Mary Had a Little Lamb” lessons the folks at the local guitar shop offer.

Thankfully, gamers who previously purchased Rocksmith for any other system can opt to go the digital download route, as their current Realtone Cable(s) will work just fine.  The cables are not machine specific, so even Xbox 360 owners can use their cable on a PS4.  The cost for the digital download at the time of this writing is the standard $59.99 – so it does save some cash, although I am not completely comfortable with not having something tangible with my gaming purchases.

Any differences to be seen between the current generation releases and the previous generation’s release are negligible.  The visuals – while a true 1080p – are nearly identical, the song list is identical, and the gaming modes are all identical.  There is nothing new thrown in, save for some useless remote play connectivity to the PS Vita which is little more than watching videos. 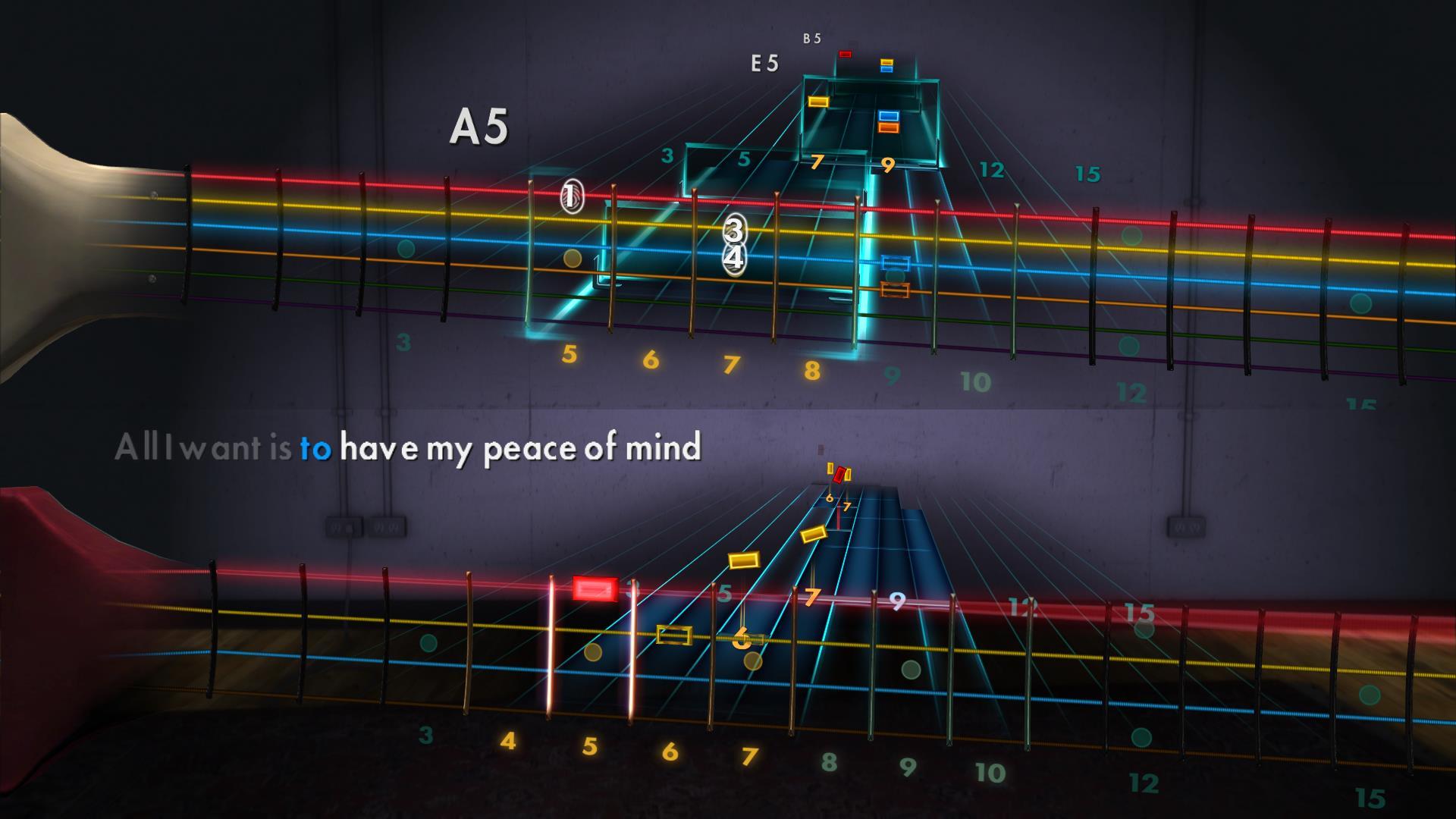 However, not all news is good with this current generation port – it seems that the audio delay (lag) between the physical note plucking and the onscreen sound (the issue that proved to be gamers’ main complaint with the original Rocksmith) has returned, and possibly taken a turn for the worse.  This relates to about a half-second delay between the two events and results in a number of frustrating missed notes.

There are various hints given to help minimize the lag (running an optical cable to a home theater system) and even a Visual Correction setting in the options menu, but with nary an instruction to be found on how exactly to use the blinking-bar metronome meter of the Visual Correction setting (and no noticeable difference at any setting), we just had to learn to deal with it.

I was hoping Ubisoft would give PS4 gamers the option to use voice commands as enjoyed by Xbox One owners, but no dice.  Gamers still have to pick up and put down a PS4 controller between every song, which gets to be a little bit of a juggling act at times switching from holding the guitar to the controller and back again.  Still, this is nothing we have not become accustomed to, but it would be nice to have some option other than flipping back and forth between peripherals.

It is also important to note that any previously-purchased DLC from the PS3 version is immediately upgradable to the PS4, and anyone picking up the game before January 31, 2015 is automatically approved for the twelve-song Jimi Hendrix pack (worth $30) to be released in mid-December.

Lag issues aside, Rocksmith still reigns as the king of the real-guitar music games. With its adaptive difficulty, Riff Repeater, Guitarcade games, and the fantastic Session mode.  It is well worth the price of admission when compared to actual guitar lessons, and you never have to leave the comfort of your living room.  If you or a friend were ever thinking about learning to play the guitar, Rocksmith 2014 is the way to go. 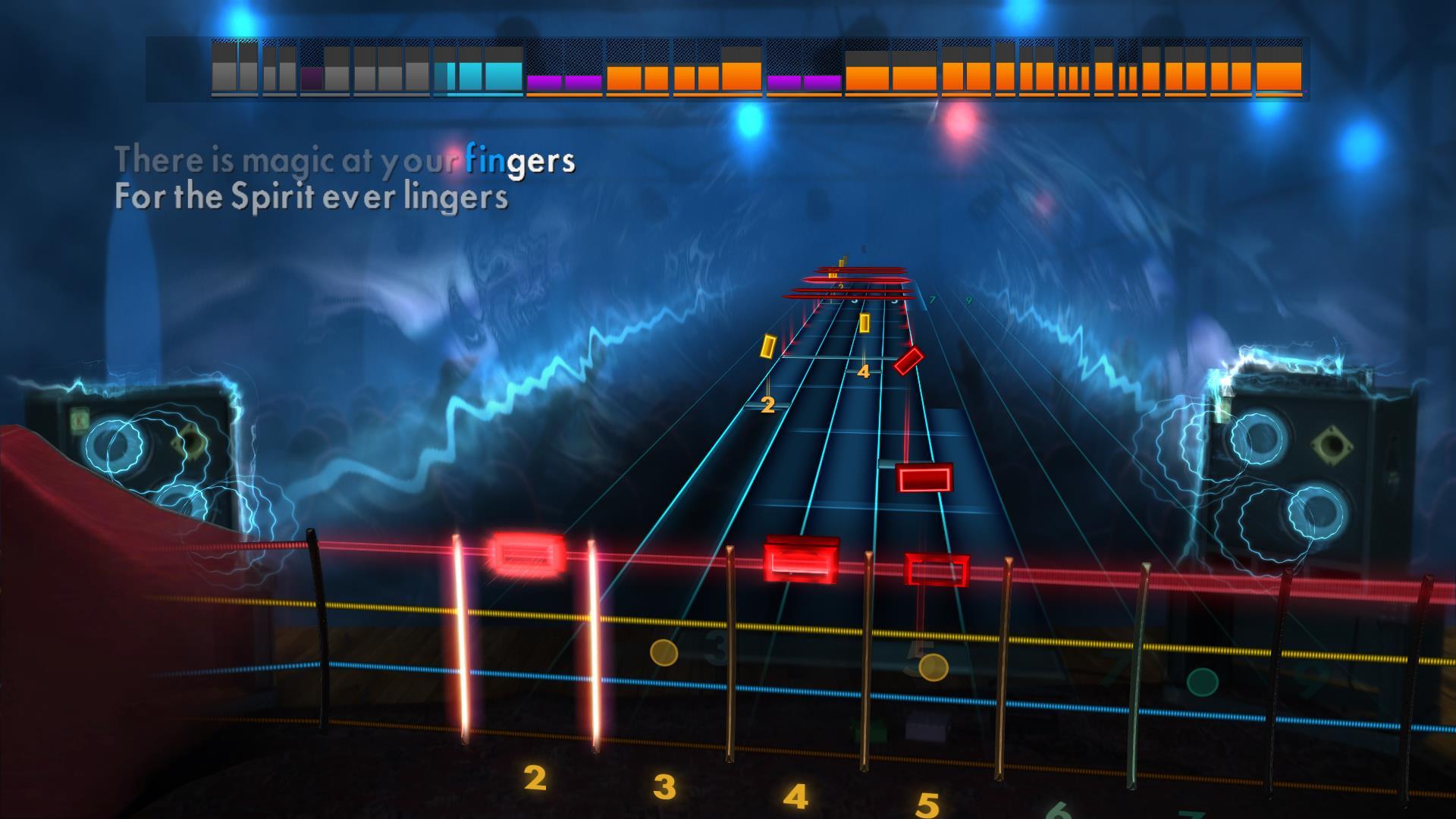 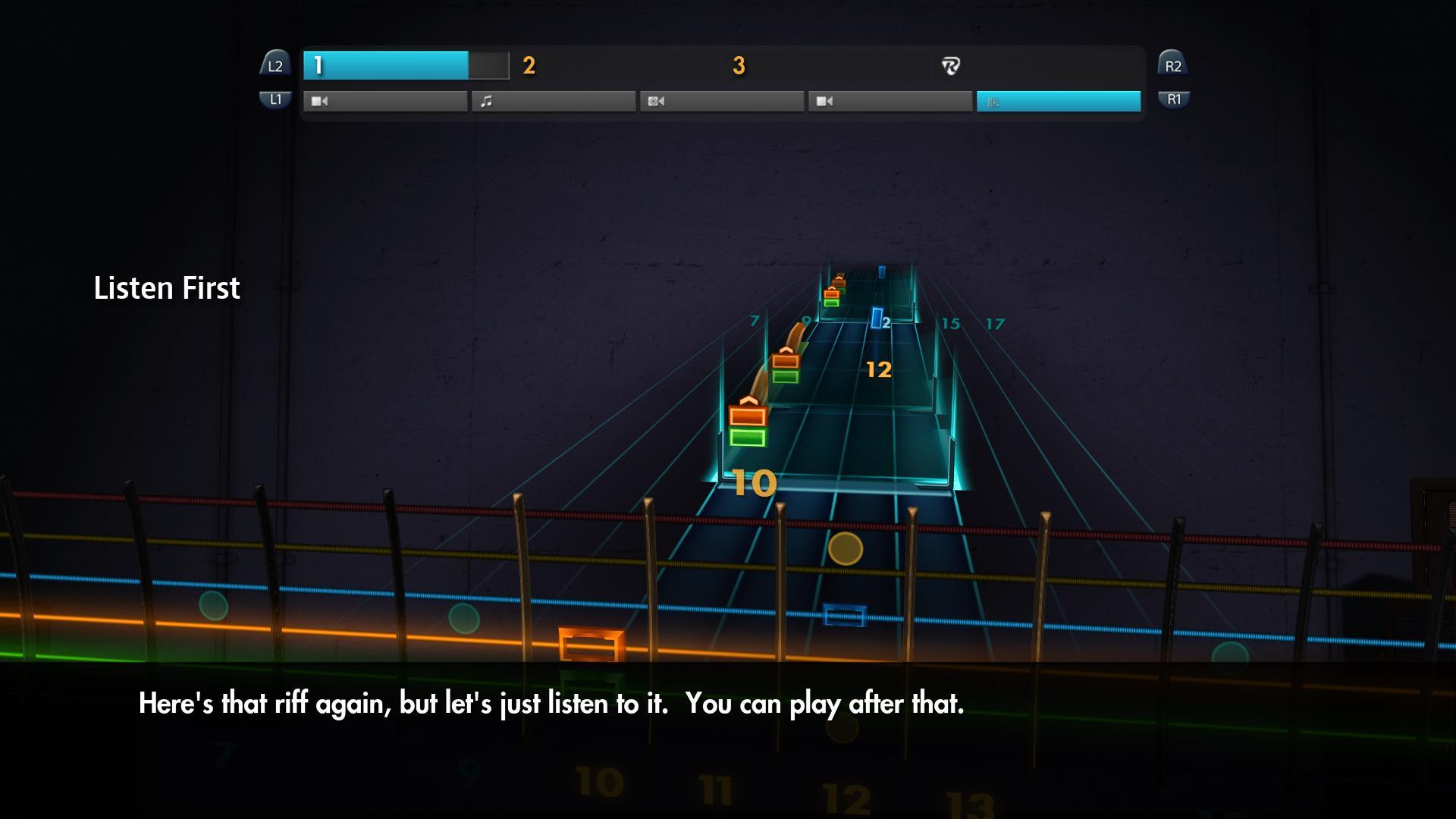 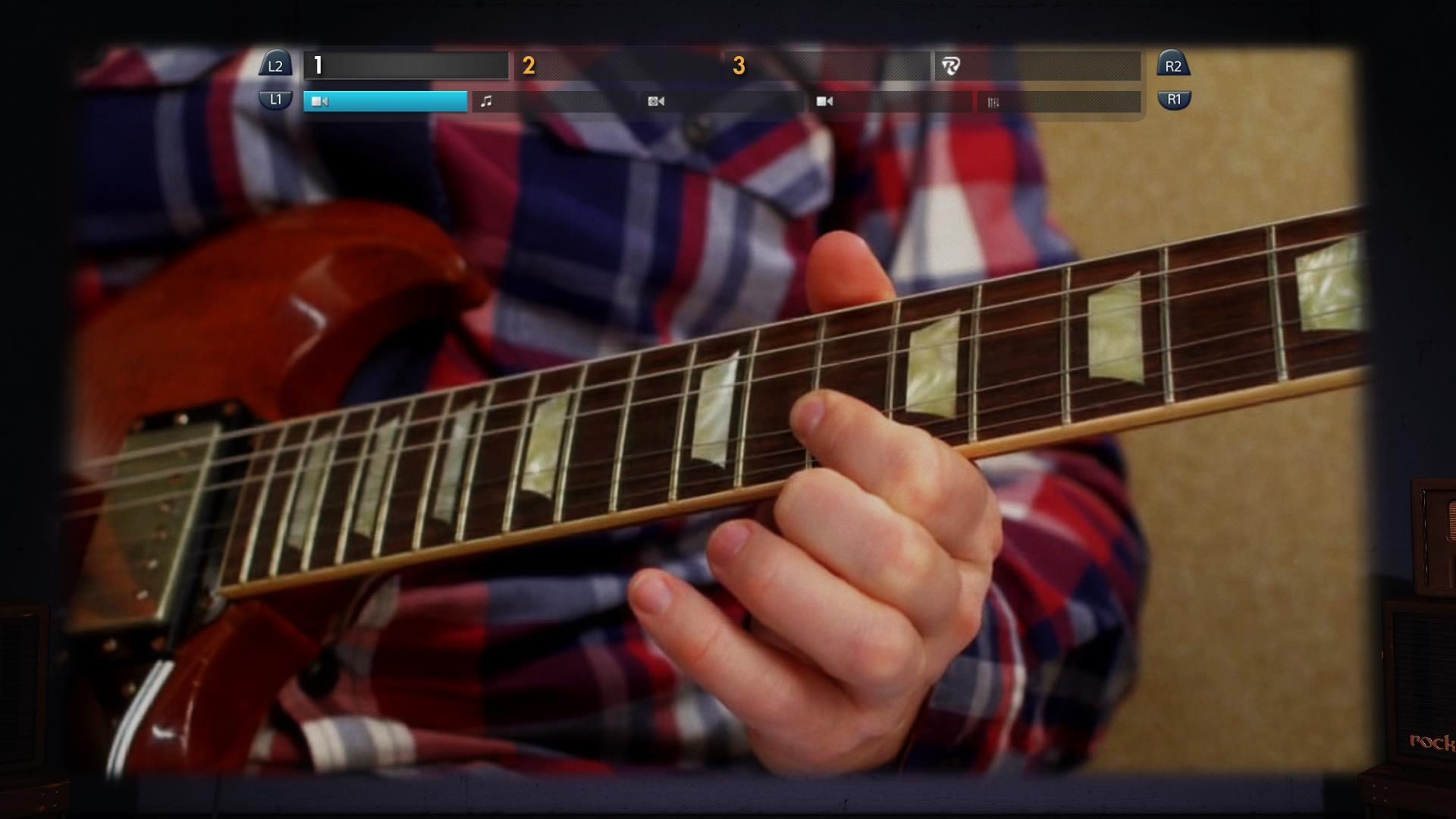 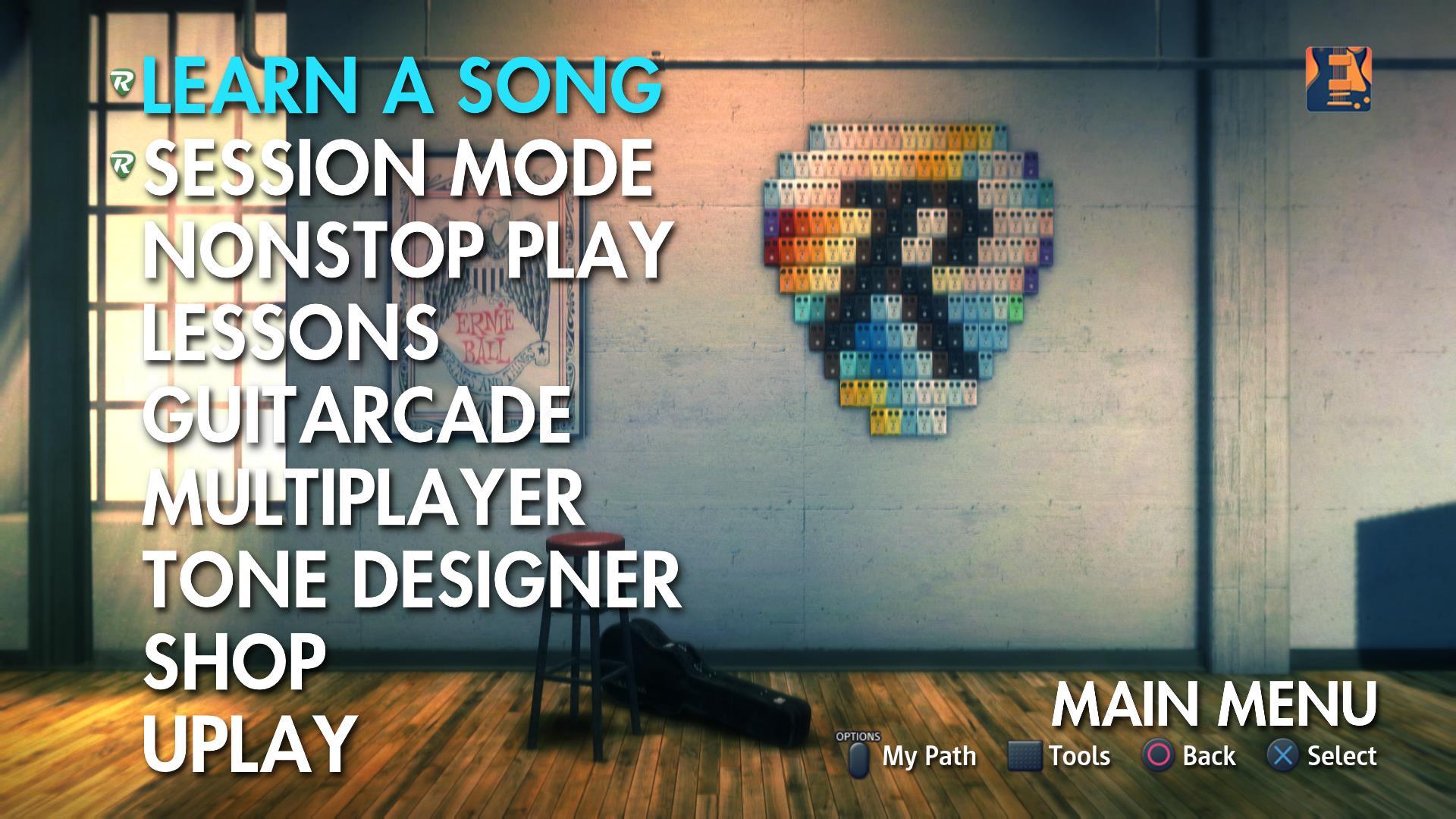 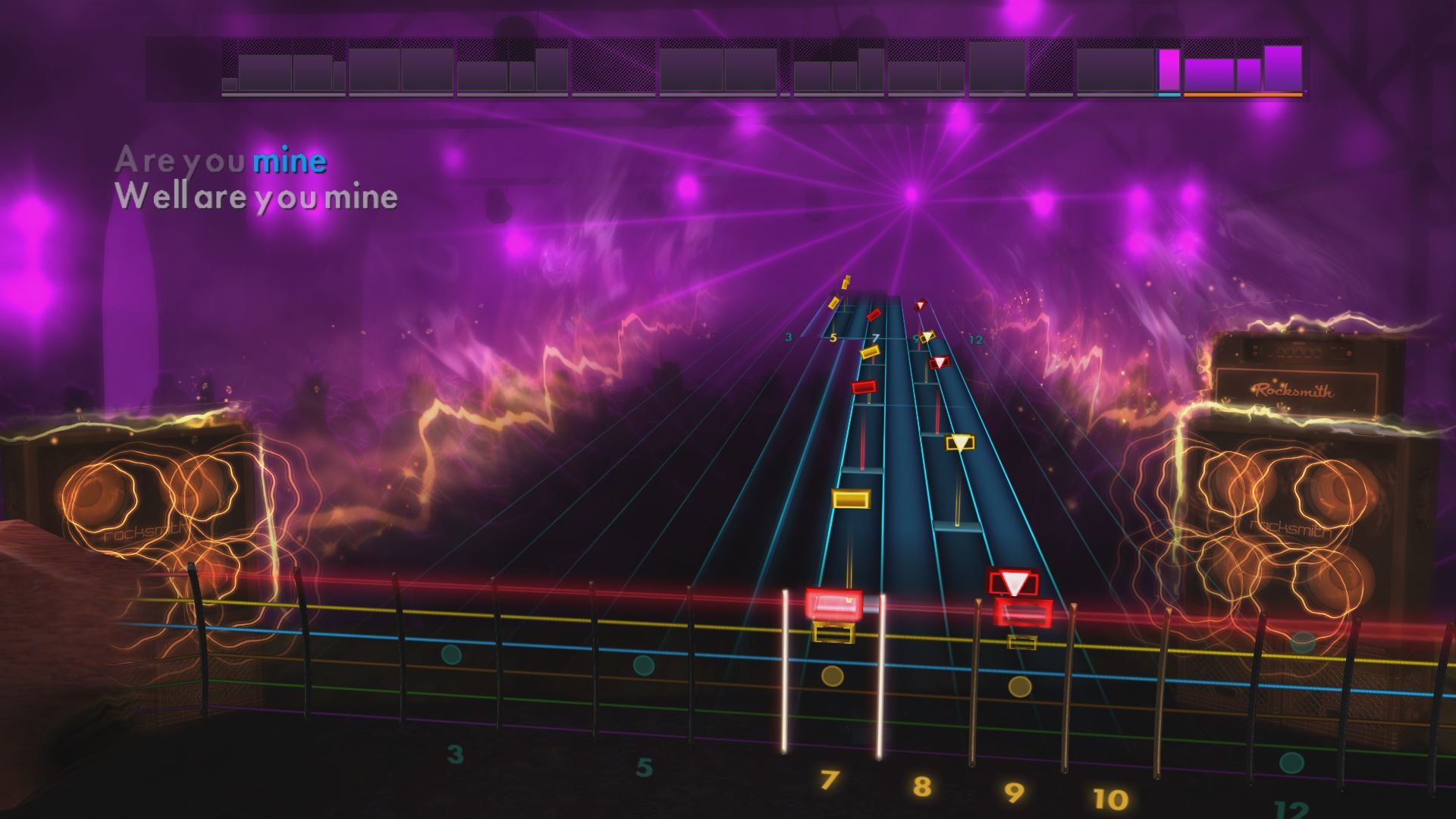 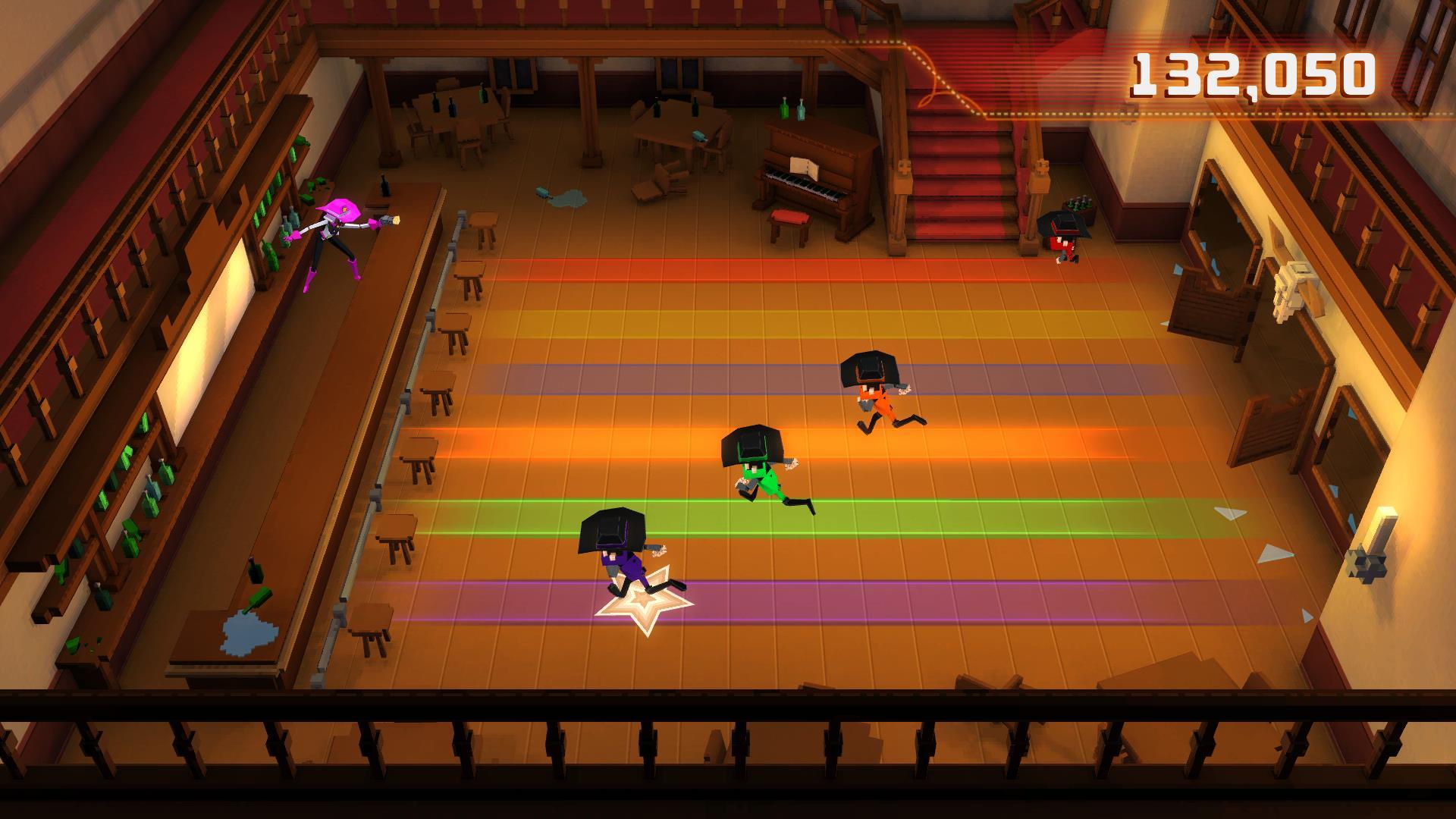