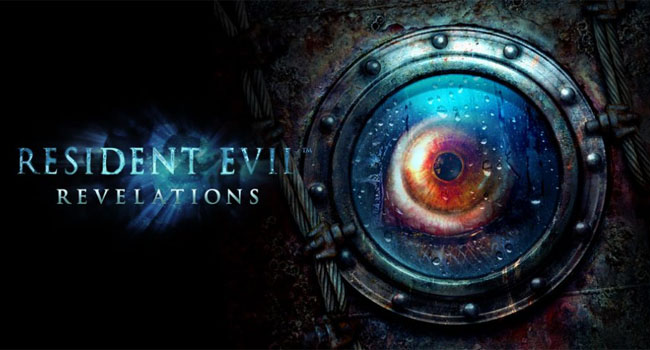 This is truly the best this game has ever looked or played.

The Resident Evil franchise has been evolving, mutating if you will, much like the T-Virus that spawned this zombie-inspired series of video games and movies. Capcom is continually tweaking the formula, trying to breathe new life into the aging franchise, and while some of their efforts have been more miss than hit, no one could argue that they created something wholly unique with Resident Evil: Revelations when it released on the Nintendo 3DS in February 2012 and the PC a year later. Now, four years later, Capcom is bringing this classic horror game to next-gen consoles with an updated version that features all-new remastered HD graphics, all of the previously released DLC, and the surprisingly addictive online co-op Raid Mode with a remixed challenge stage called “The Ghost Ship: Chaos”.

Resident Evil returns to its survival horror roots with a brand new setting that delivers a more intriguing and tension-filled gameplay experience than any Resident Evil to date, and with the graphical overhaul Revelations is certain ready for its console debut. The Revelations story slips into the timeline somewhere between the events of Resident Evil 4 and Resident Evil 5, unveiling new adventures for Jill Valentine and Chris Redfield. Jill and her new partner, Parker Luciani, have been sent on board a supposedly abandoned cruise ship in the Mediterranean, to search for Chris Redfield, based on his last known GPS coordinates. The ship hides danger around every corner as Jill and Parker explore the confined space of the ship and must face a menacing new horror that emerges from the darkness. 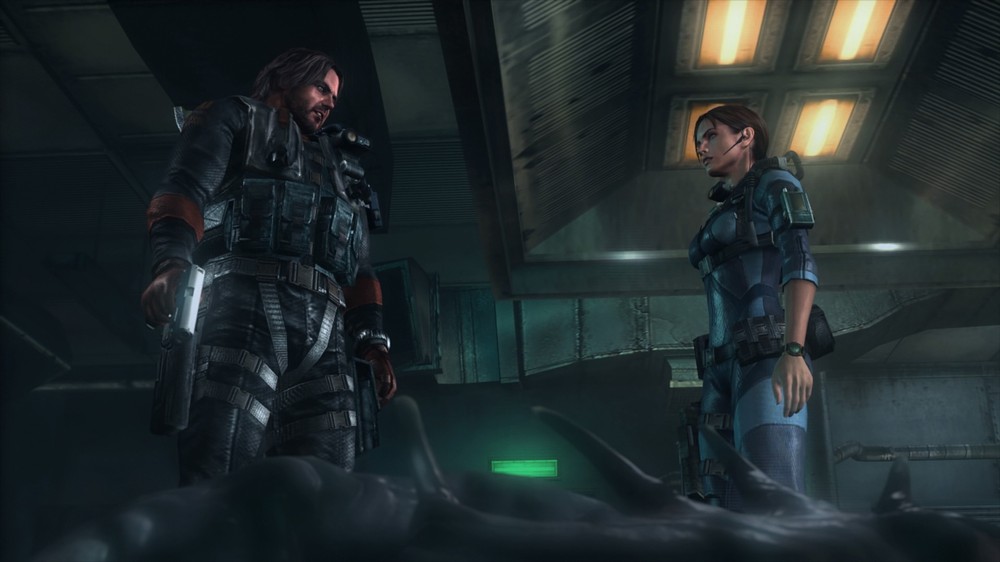 Adding a new unique horror setting to the series, Resident Evil: Revelations gives players the chance to venture underwater, as they try to escape the terrifying creatures that are roaming the ship. But even the water isn’t safe as the creatures continue to attack from the depths while Jill and Parker make a desperate bid to make it off the ship alive.

The enhanced textures and boost in resolution do the impossible; taking a game designed for a 3” screen and making it look fantastic on my 75” screen. Admittedly, it doesn’t have all the bells and whistles of a true next-gen title but for an HD remaster of a five-year old game designed for a handheld, this is impressive. Another much-appreciated addition is the choice of control schemes, allowing you to choose between the dated classic tank controls or a more modern analog movement design. While the game is presented in 3D you still get those abrupt camera changes as you move from room to room that can interfere with combat. 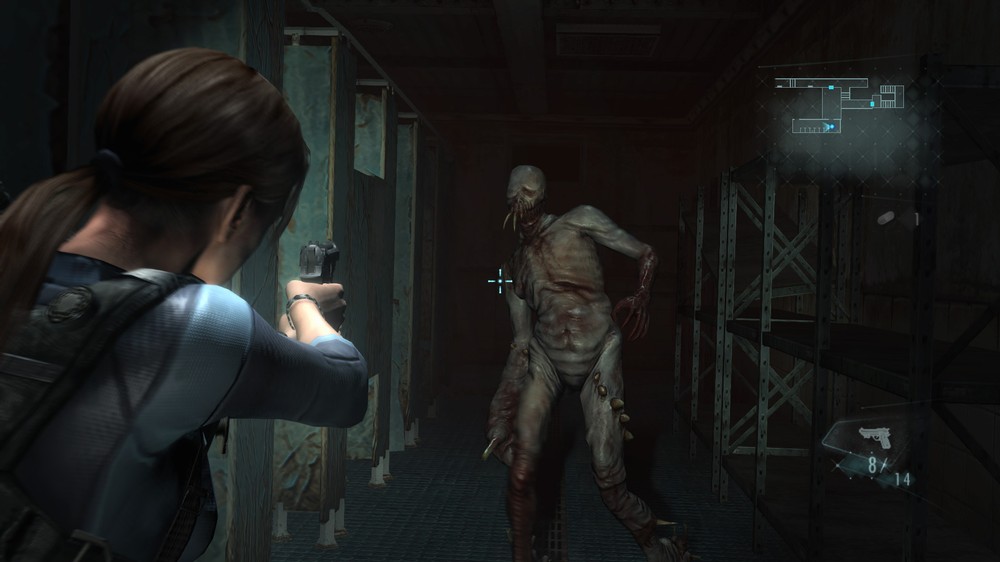 The sound design is a masterful blend of suspenseful score juxtaposed against perfectly timed moments of silence that have you straining to hear the subtle groans of the ship or the distance shuffling of a zombie, the howl of wind or splash of rain. The audio mix has been given proper attention to make the jump to the big screen, and it’s only better, scarier, and more intense on a home theater system.

Revelations is divided into numerous chapters, perfectly sized for mobile gaming consumption, so things move by at a seemingly accelerated pace when played on the PS4. While much of the game takes place on the ship in present time you will flashback to other times, other characters, and other events as you experience a puzzling 10-12 hour adventure worthy of a console release. You’ll usually have the help of a computer-controlled companion that will help thin the zombie menace or at least distract them long enough so you can kill them, and unlike RE5, this time they won’t be looting all your ammo and herbs leaving you to die. 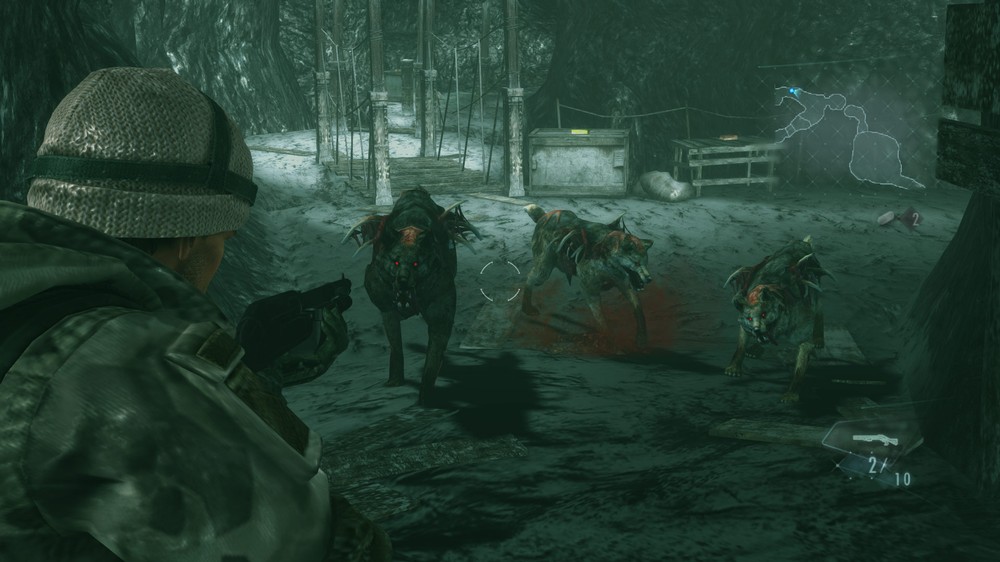 The solo experience of the 3DS has been improved on the PS4 to include the much-appreciated co-op Raid Mode with a newly remixed level and improved on the PS4 with new skill sets, enemies, and characters allowing two players can link hook up and explore the environments from the story mode, killing zombies as they try to clear the levels and reach the exit. All previously released downloadable content is also included in the game as unlockable rewards.

Resident Evil: Revelations is one of my all-time favorite 3DS games and now that is has finally arrived on the PlayStation 4 there is no reason that any zombie hunter shouldn’t check it out. Available as a $20 digital download, Revelations offers up a solid 10+ hour solo adventure and plenty of online fun for those who want to keep playing after the credits roll. This is truly the best this game has ever looked or played so check it out now. 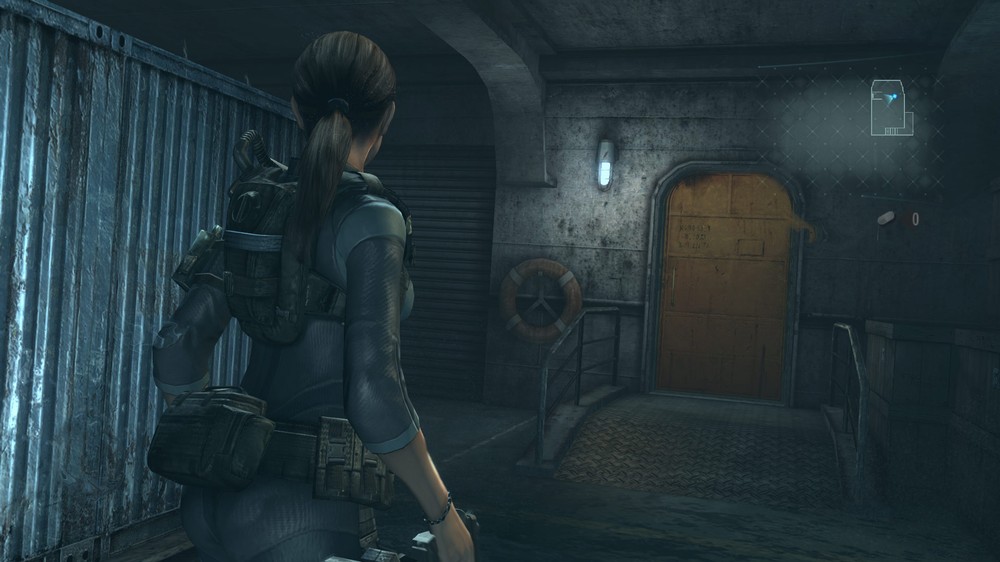 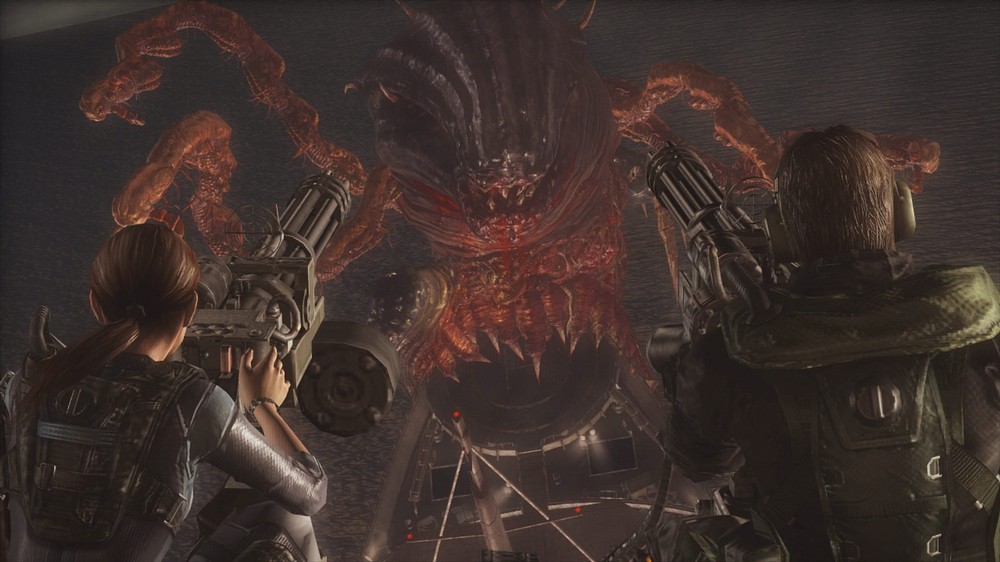 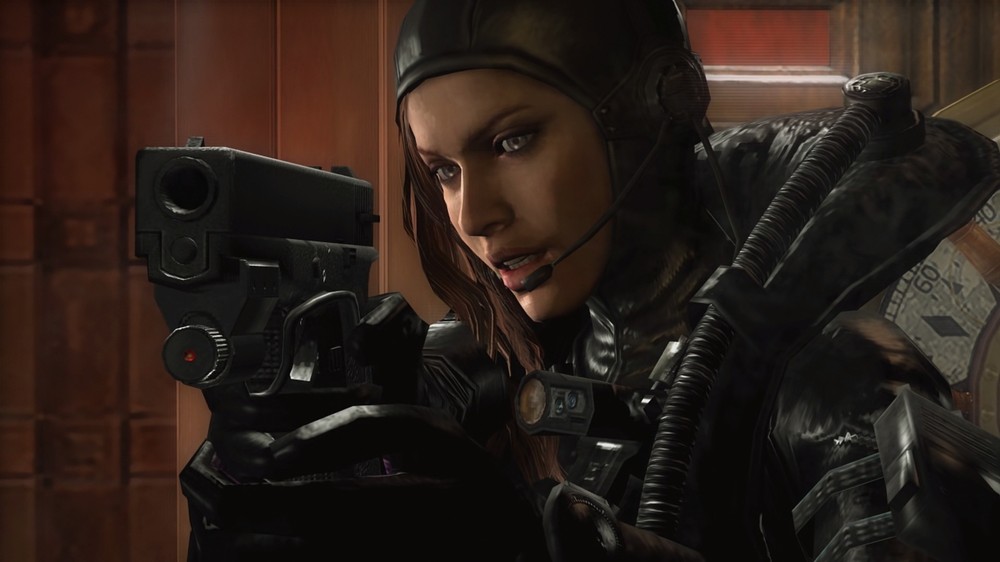 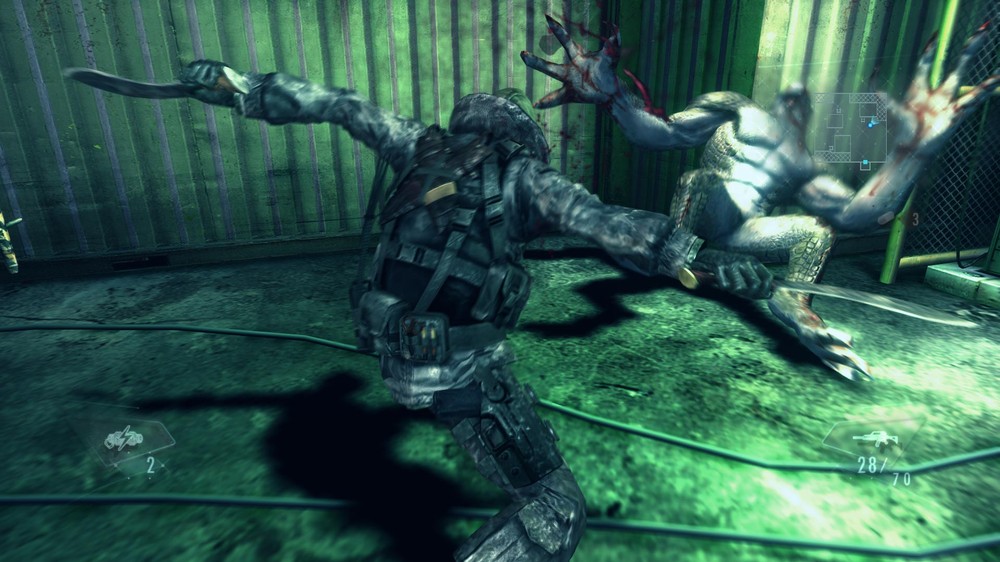 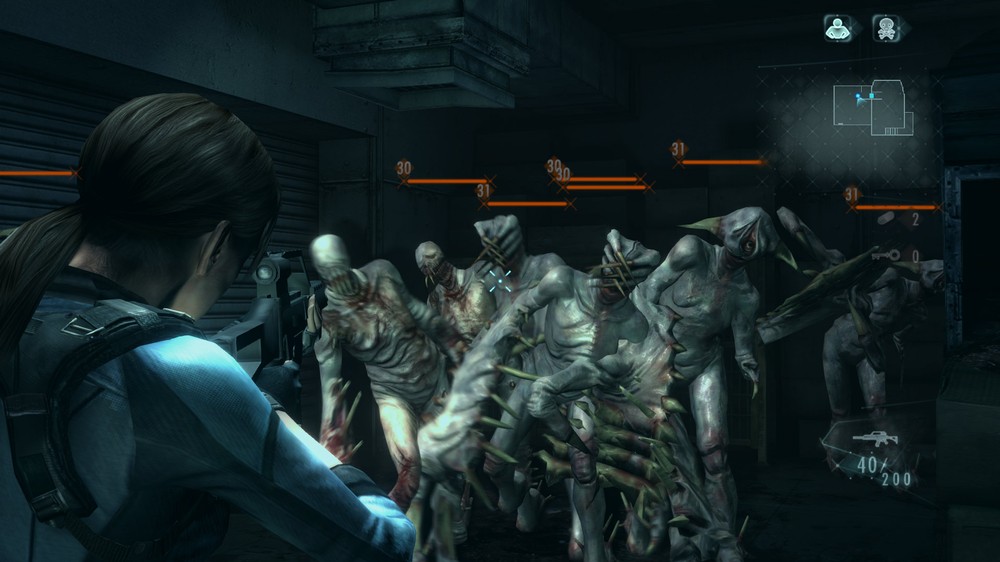 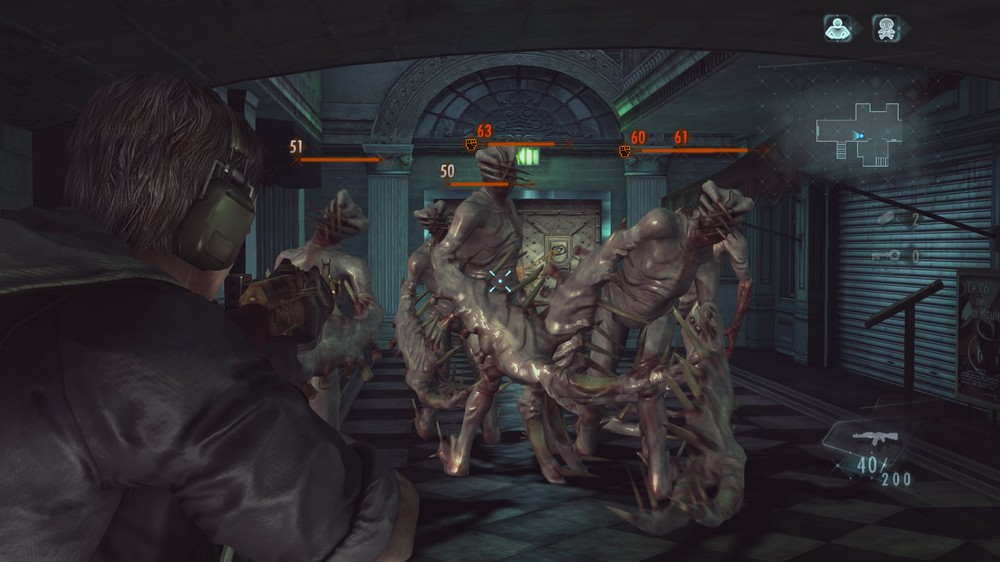