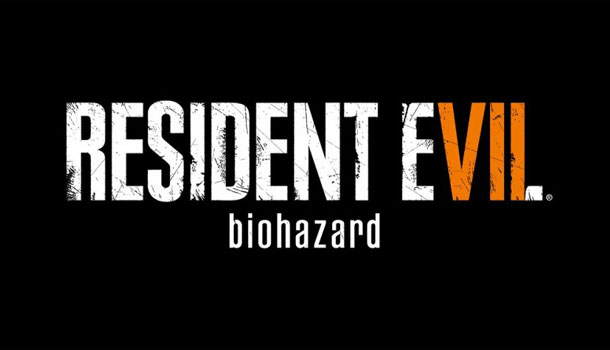 - Major departure from series in theme, lore, and camera perspective may turn off old-school fans.
- Potential for VR sickness

The best VR game to date for any system and the first must-have title of 2017.

The hardest part of reviewing Resident Evil 7 Biohazard is figuring out which title to use. Should I use the Roman numeral…should I include the “biohazard” subtitle…or is it even a subtitle? Even the box art and the in-game title screen can’t seem to agree. Thankfully, playing and enjoying Resident Evil 7 is the easy part, as this seventh numbered installment in the series not only reboots the franchise but moves it forward into the era of VR.

I had to force myself to finish RE5, and RE6 was just a dismal failure on multiple levels, but I was willing to give Capcom another shot; especially when the demo showed such promise with a new first-person take on gameplay and a general shift away from the whole “zombie” premise, but to be honest it was the support for VR that really had me intrigued. Resident Evil 7 is the first AAA title that can be played entirely in VR and Capcom’s support for the new format is simply brilliant.

While other games like Call of Duty, Tomb Raider, and Star Wars Battlefront may offer a small slice of VR based on their full games, Resident Evil 7 gives you an in-game option to toggle between VR and non-VR at any time, so if you start to get VR sickness (and many do) you can simply go to options and return to a standard TV view. There are also numerous comfort options to help reduce motion sickness. Personally, I found the stepped panning and visible reference lines to be super-annoying. I settled on smooth panning and normal movement and had no ill effects during 4, 3, and 6 hour play sessions. 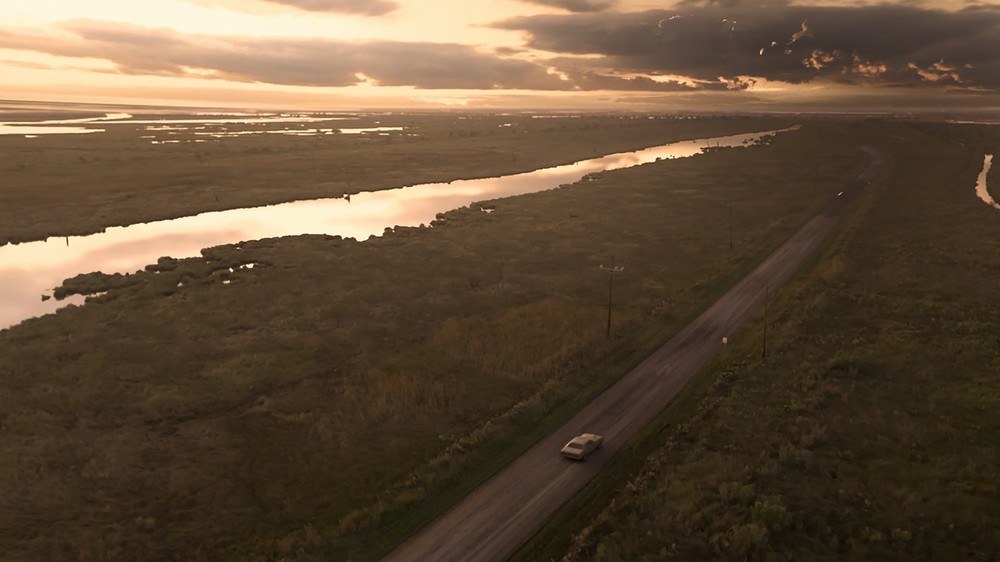 While the focus of this review is VR, Resident Evil 7 does offer some gorgeous visuals on a standard HDTV including full support for 4K and HDR with a special boost in horsepower if you are playing on a new PS4 Pro. VR owners with an HDR TV will need to rewire their connection to bypass the VR control box to take advantage of HDR. I only played about 15 minutes of the game in non-VR. After four hours of playing in VR going back to a standard view – despite looking significantly better – lacked the immersion I now crave from VR. I was more than willing to sacrifice visual fidelity for that feeling of actually being inside the game.

Admittedly, this is more acceptable in a game like Resident Evil 7 where the whole game smacks of a “found footage” movie; a bit grainy and overly dark. From the opening menu to the final boss fight VR sucks you into the game and never lets you go with the exception of a few cutscenes that play out on a virtual theater-sized screen in your headset. The head tracking is some of the best of any game to date for the PSVR. I only had to recalibrate the headset (push the Options button) maybe 2-3 times per marathon session compared to other games where I am mashing that button every five minutes. 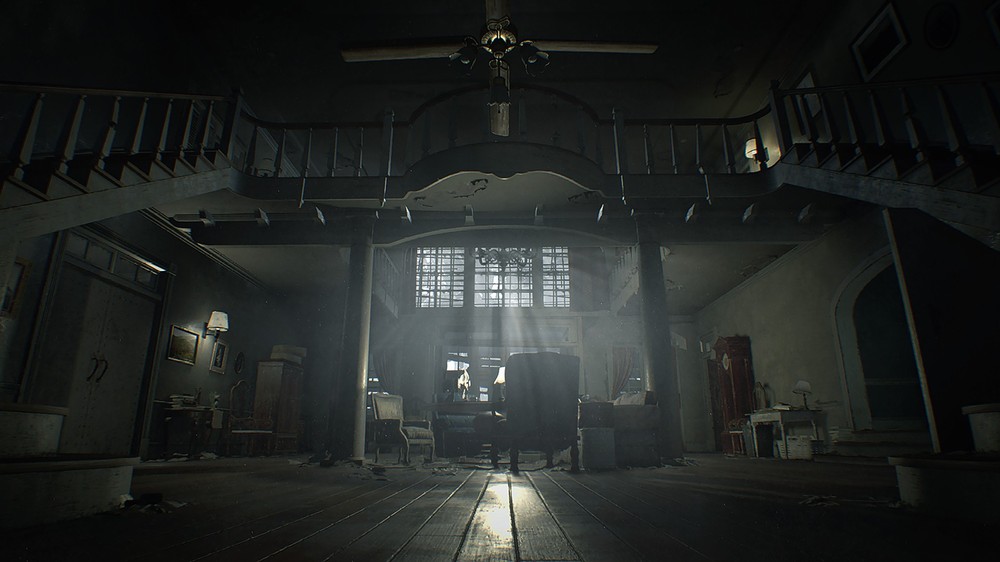 The menus and inventory screens are totally functional and intuitive and the game controls are excellent using the DualShock 4 to move, fight, and interact with the environments. Items of interest will give a visual prompt and if that object requires something from your inventory that screen will pop-up whether you have the item of not. Combining items is a trademark of the franchise but Resident Evil 7 puts a spin on the concept by giving you crafting ingredients that let you decide whether to make health or ammo items by combining raw ingredients with chemical packs. And just like those original games, inventory management is a huge pain in the ass, forcing you to visit those magic storage boxes to offload your excess items – although there is a trophy for never using them.

Resident Evil 7 is a definite homage to the original Resident Evil game that took place in that now infamous mansion 16 years ago (in game time). Jump scares permeate the game, and there are numerous locked doors requiring symbolic keys or objects placed into indentations or even shadow alignment puzzles. Most of the game takes place at a singular location that is divided into distinct areas like a guest house, main house, and old house and instead of typewriters and ribbons you now have cassette recorders to save your game. 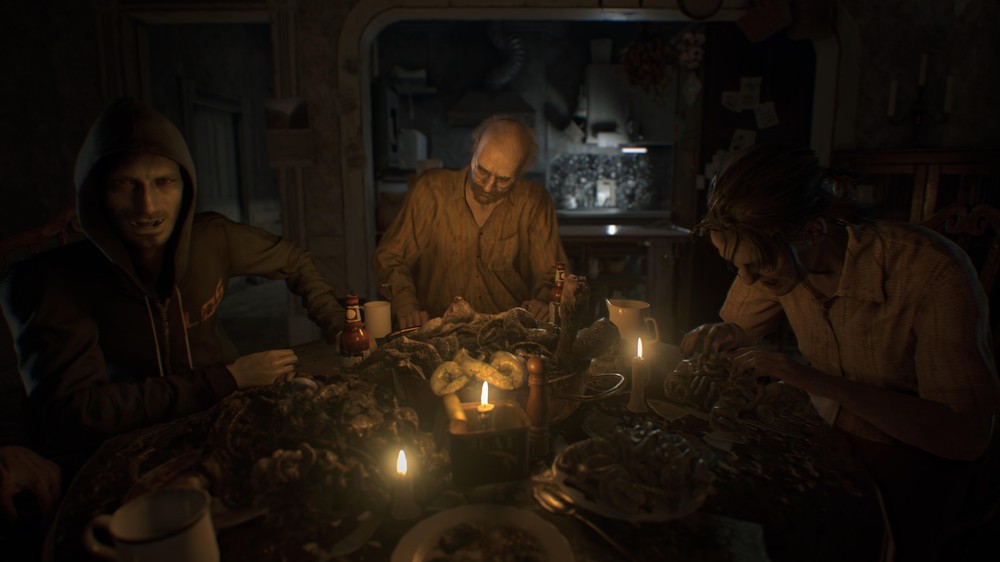 I’m not going to ruin the narrative with details. Basically, your wife, Mia, has been missing for three years and one day you get a video message from her. She obviously looks distressed and tells you not to come looking for her, so naturally you hop in your car and drive to the bayous of Louisiana to her parents’ house, which looks like the set of a chainsaw massacre sequel. Prepare for lots of terrifying adventure…Cajun style.

The game is loaded with collectibles including ancient coins that you can redeem for useful items, football bobble-heads you can shoot, and all sorts of documents to read that tell an engaging backstory that eventually ties these events with the rest of the Resident Evil lore. Estimated play times are 10+ hours, and I finished the game in 11:24 only missing a few of each of the collectibles on Normal difficulty. There is a Madhouse setting for those looking to boost their challenge and earn that rare trophy.

VR is perfect for a game such as this. Resident Evil 7 relies heavily on scaring you with what you cannot see. In non-VR gameplay they had to lower your camera speed so it takes seeming forever to turn around, but in VR you can simply whip around to check your six, and actually leaning out to peek around corners is far more immersive in VR; especially since there are at least two lengthy hide-and-seek sequences in the game where running and hiding trumps staying and fighting. Surround sound is flawless whether you are playing with some good headphones or sitting in the middle of a home theater setup like me. The game has minimal music during the exploration and avoidance portions so you can hear the house creaking and maybe distant footsteps or rain on the roof and the rumble of thunder, but then the score kicks in to highlight moments of tension or action. 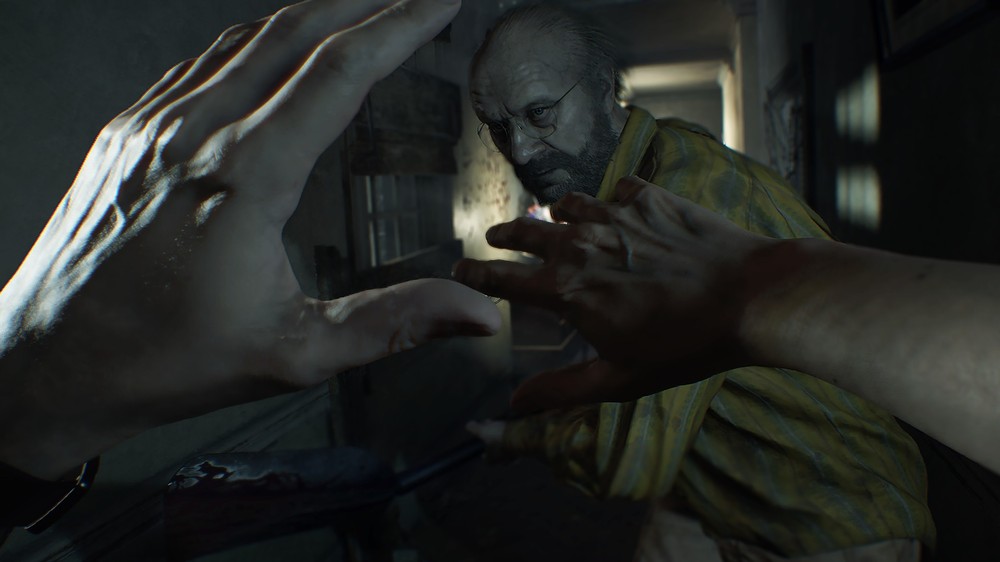 Resident Evil 7 is a dark game and it only gets darker in VR, which does increase the screen door effect, so it looks like you are playing the game with black nylons pulled over your face. The game automatically adjusts your peripheral vision when you run or make quick panning movements, and there is noticeable resolution pop-in when moving between main areas of the game as the game loads in textures. Indoor areas look decisively better than outdoor ones as you will clearly see at the start of the game when walking through the woods to reach the house. Leaves and branches are fuzzy and there is loads of shadow pop, but once you get inside things get dramatically better.   Load times are mostly acceptable, but if you load a game from an area not already in the cache or when exiting from watching/playing a VHS tape, load times are an agonizing 2-3 minutes.

I was very impressed with the overall quality of the graphics in Resident Evil 7. Sure, it’s a stunner in 4K HDR but even the view inside the PSVR is surprisingly crisp, clean, sickly, and terrifying. Some graphics were so real I could almost smell them, while others like spiders and insects crawling on my virtual arms had me swinging my real arms around trying to knock them off. There were only a few oddities like the fact that your arms aren’t attached to anything, and that you cannot zoom inventory items when examining them – only rotate them. 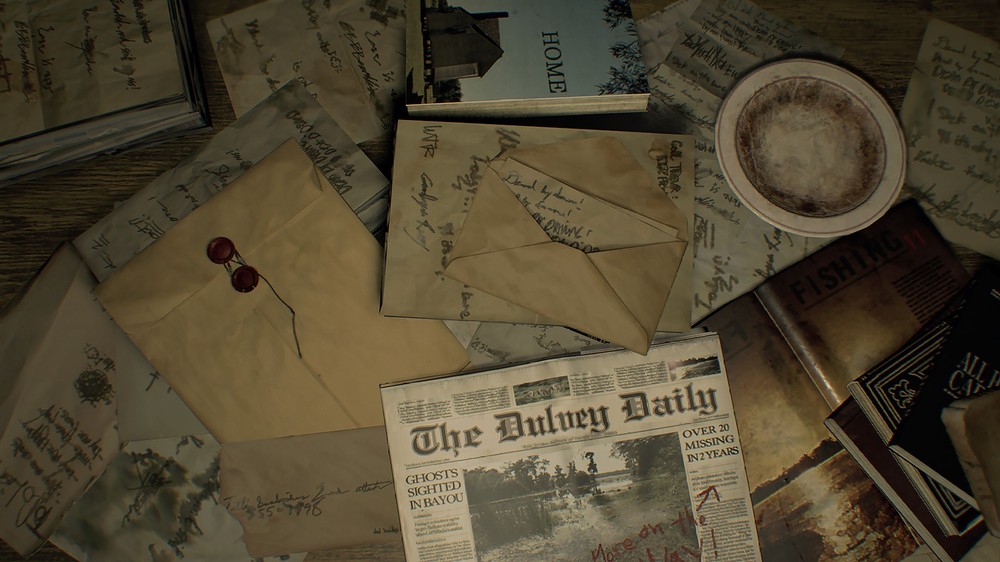 Capcom has set the bar very high for all other AAA titles that are considering VR, either as a primary format or a supported option. Admittedly, VR doesn’t work for all games or genres, but it works exceptionally well for horror-based adventure games. After all those years of static camera angles in Resident Evil games it was a refreshing change to actually take control of my life and become part of the adventure. VR not only changes your perspective on the game’s visuals, it totally changes your level of immersion and engagement with the experience.   I was INSIDE the game when playing in VR, but when I tried it the old-fashioned way I felt like a spectator playing a regular FPS video game. If you’re considering playing it both ways I’d almost recommend you play in non-VR first, but even then you’ll be ruining a lot of those jump scare moments that are so much better in VR.

Resident Evil 7 is available for PC, Xbox One and PS4/VR and while you may be able to coax some extra graphical juice out of the PC version on a high-end rig the PS4 clearly offers the best and most complete experience of all the formats. The 4K HDR is outstanding for those with a PS4 Pro, and for those fortunate enough to own a PSVR prepare to descend into madness with what is easily the best VR game to date for any system and the first must-have title of 2017. 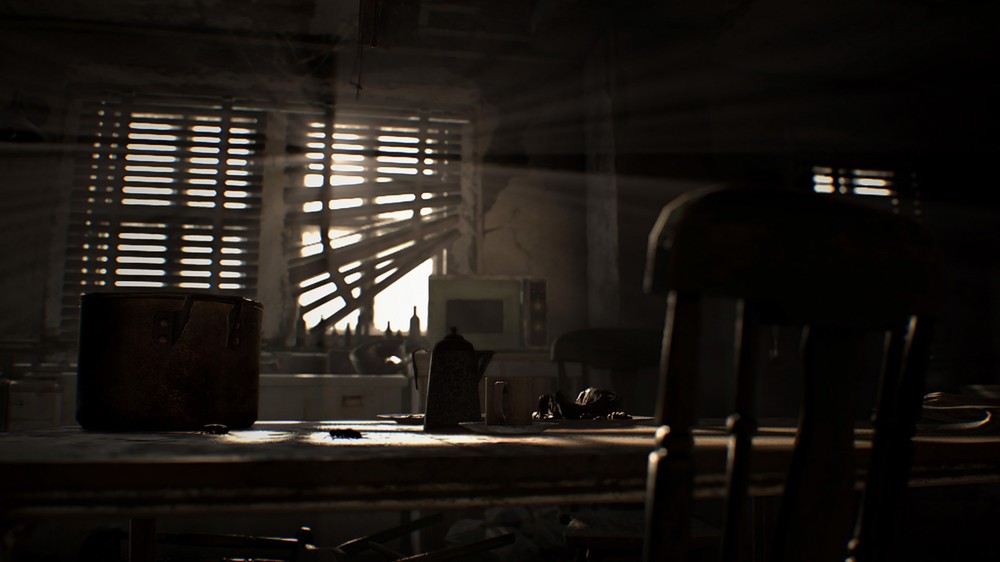 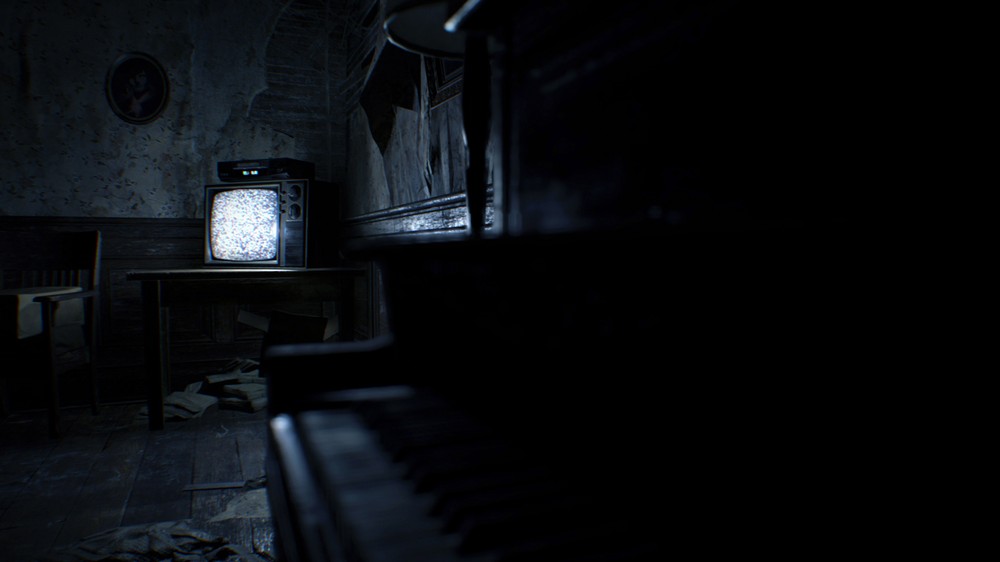 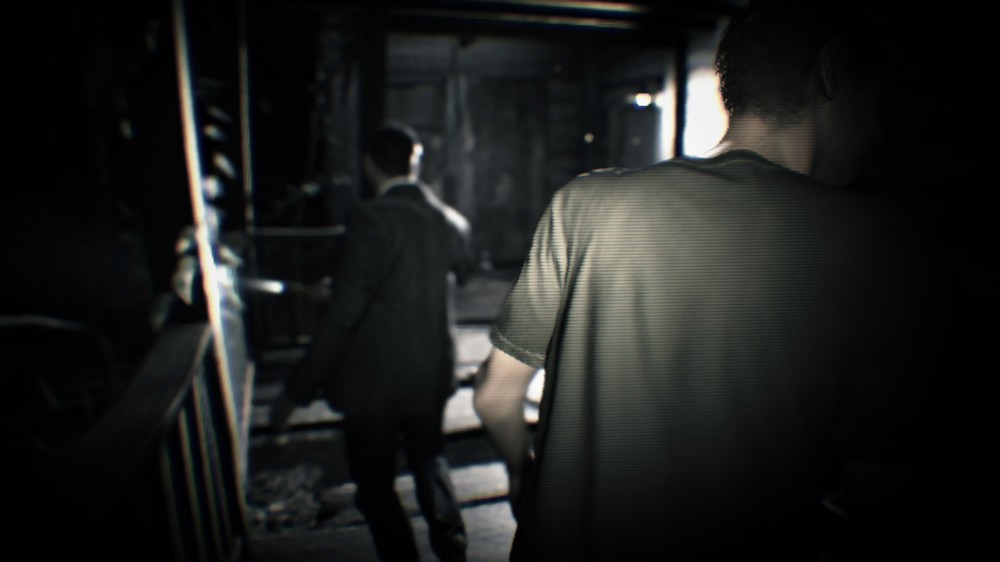 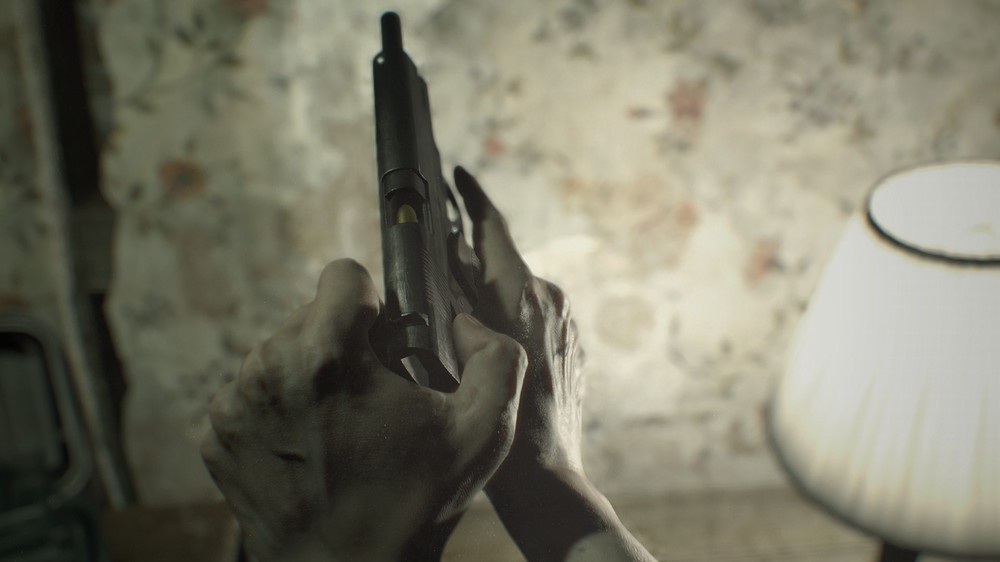