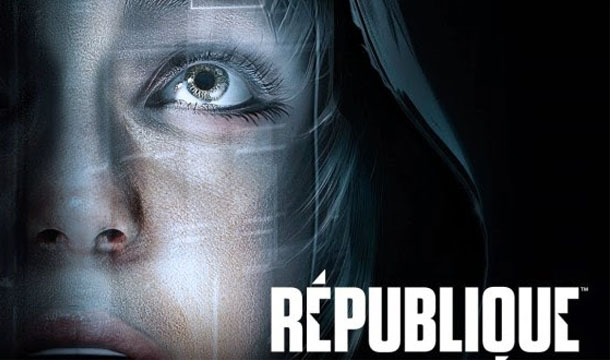 “Destiny’s on line two, so pick up the ******* phone already”. That little gem of inspiration is brought to you by the big instigator Zager in the Kickstarter-funded title Republique by developer Camouflaj. Those words couldn’t possibly ring more true though as the stellar story that is Republique starts with the answering of a phone.

I’ll be honest; I’ve been following Republique since I first found out about the Kickstarter campaign back in 2012. While I missed joining in on the campaign, I was hot on the purchase button when it launched originally for iOS in 2013. Originally released in episodic form, Republique finally reaches its epic close with the final episode releasing simultaneously with the PS4 version in its complete form. The PlayStation 4 release of Republique not only brings all five episodes under one totalitarian roof but also adds a whole new control scheme better suited to a gamepad.

Republique is a mystery filled story that follows a young girl that calls herself Hope who desperately needs help to save her from a fate that almost sounds of something worse than death itself. It only took me moments to get hooked into this seemingly bleak and certainly oppressive dystopian environment the first I played it on iOS and I’m happy to say that my return trip on the PS4 has not diminished that feeling in the slightest. A huge reason for this is that you, the player, have a very real and integral part that you play in our young Hope’s survival even if you’re doing so from the lens of one of the many cameras at every turn in the Headmaster’s vision of a utopian nation. 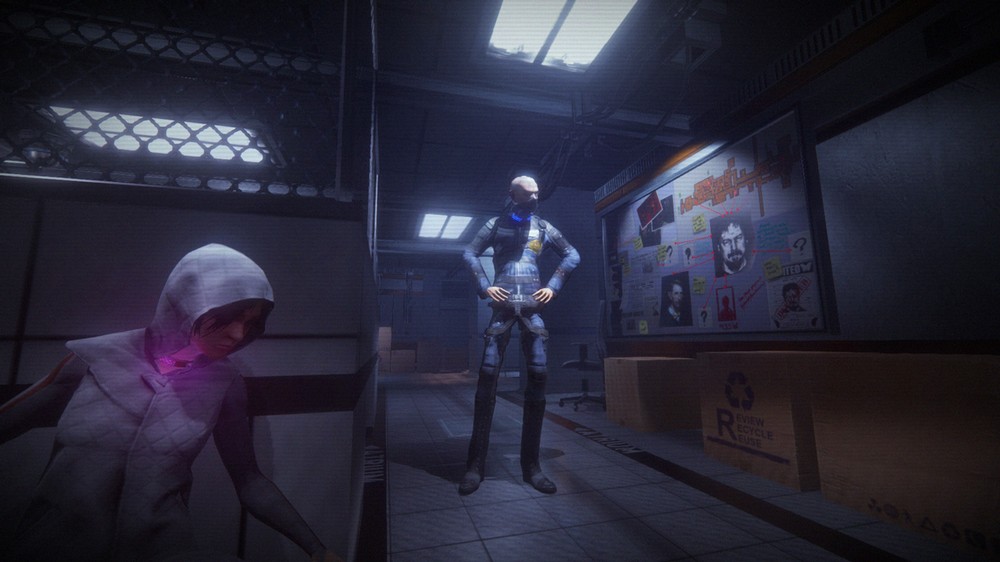 Republique isn’t the first title that I’ve played that puts you in the role of someone on the other side of cameras and controlling them to help out a woman in a mysterious predicament. Similar in style to the PC adventure title “eXperience112” (or The Experiment here in the US) you must help Hope through the rather fancy looking facility known as Metamorphosis. Though all that glitters is not gold as the facility is ran by an ironfisted Headmaster who controls every facet of the pre-Cals lives even going so far as to restrict what books they read. Spoiler alert…its one book called the Manifesto…written by the Headmaster himself.

What really sets the two games apart is that Republique heavily focuses on stealth based gameplay as you have to constantly avoid guards, certain cameras and even one major walking roadblock throughout the adventure. This comes as little surprise as the founder of Camouflaj is none other than Ryan Payton, an assistant producer on Metal Gear Solid 4. While I’ve never been particularly good at Metal Gear, I’ve had a love of adventure games and certain stealth based franchises for a long time. Republique has come a long way since the release of its first iOS episode and while the touch screen worked well there I’m glad they went a different direction for the PS4 version.

For the first time you actually have direct control over Hope’s movement through the world instead tapping where you what her to go or what you want her to interact with. This actually works rather well for the most part as you can simultaneously move her and pan your currently occupied camera to keep an eye on her and a watchful eye out for the guards. This is also where the most crucial element of the game is problematic at the worst times. You can strategically plan your routes or choose when to go in for the steal to pickpocket guards but when the camera view changes from one camera to another mid movement it makes Republique go all Resident Evil with the character control as up sudden becomes down. 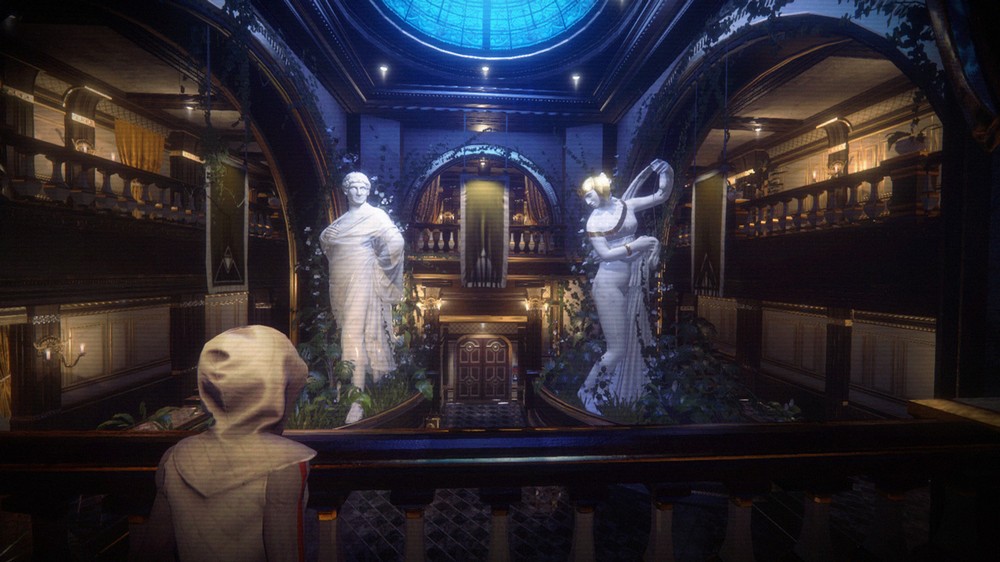 It also doesn’t help when you accidentally get caught on the environment when trying to make a time critical maneuver when the camera shifts. It’s even worse when there is a lengthy lag between camera jumps especially when changing rooms in the heat of an escape. It’s a bit more manageable when you’re casually switching while searching whether it be collectibles or guards but it’s no less annoying. Luckily the field of vision and hearing of each of the Prizrak guards are less than stellar. How can you not hear a grate opening three feet from you?

The camera mechanic isn’t all bad though as it really helps flush out the backstory and the story’s themes of voyeurism, information control and other key elements to usher in a world without conflict. If this all feels very Orwellian then you’re on the right track though nothing is as it seems as you delve deeper into the lives of Hope, Zager, Mireille, Cooper, The Headmaster and even the Prizrak guards. While the cameras in Metamorphosis may be oppressive to the pre-Cals and its other enlightened inhabitants, they are your way to finding the goldmine of information you’ll need to keep Hope safe.

Republique is full of collectibles like banned books, audio tapes left by a deceased enemy of Metamorphosis known as Zager, and coveted game floppy discs that Cooper gives his own little critique on when viewed. These can be found by scoping out every nook, cranny and guard to locate them so you can stealthily navigate Hope to get them. Some information however is gathered remotely such as security door passwords, blueprints and personal information. All of this including the operation of cameras and unlocking doors and chests is done through a feature known as OMNIview. 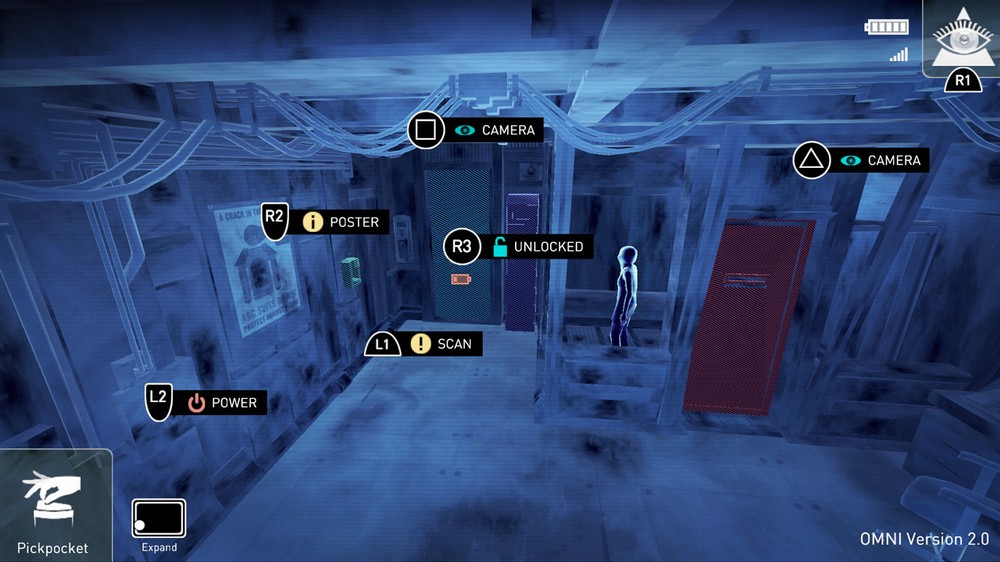 Once activated, the world view is turned into a film-negative version of itself with only important elements like posters, guards, locked items, datamining areas such as computers and answering machines are distinguished by their representative colors like green for books and tapes. This mode also actually freezes time so you can plan things out with little fear of Hope being spotted by guards while doing so. It’s also important to note that you’ll want to be extremely thorough when trying to find all the collectibles in one playthrough as unlike the mobile and PC versions you can’t go back and play each chapter independently.

Much like our phones and tablets today, OMNIview will have to be upgraded periodically to give you farther reaching access into the infrastructure of Metamorphosis. All those items that you will scan for information also have a secondary purpose beyond flushing out the story. This information can be sold be sold to a Data Broker station as a way to earn money to afford upgrades to your OMNIview abilities like being able to see guards through walls, predict patrol routes of a particular guard and even distract them. Some abilities will drain the battery of Hope’s phone so you’ll always need to be on the lookout for battery chargers or charge stations to keep using the more vital abilities. Luckily you don’t have to worry about draining her battery checking to see if a Prizrak is susceptible to a Taser charge or not if you get caught.

While you will spend a good chunk of your time in OMNIview, it doesn’t detract to how gorgeous Republique really is when you’re moving Hope around in real time or watching the few crucial cutscenes sprinkled throughout each episode. If I hadn’t known this was a mobile game ahead of time, I probably wouldn’t have believed it if you’d have told me. The level of detail on both the characters and the level designs are outstanding even when inspected up close. I particularly love the rain effects that you see reflected on the floor when you’re below giant skylights or outside in the rain. 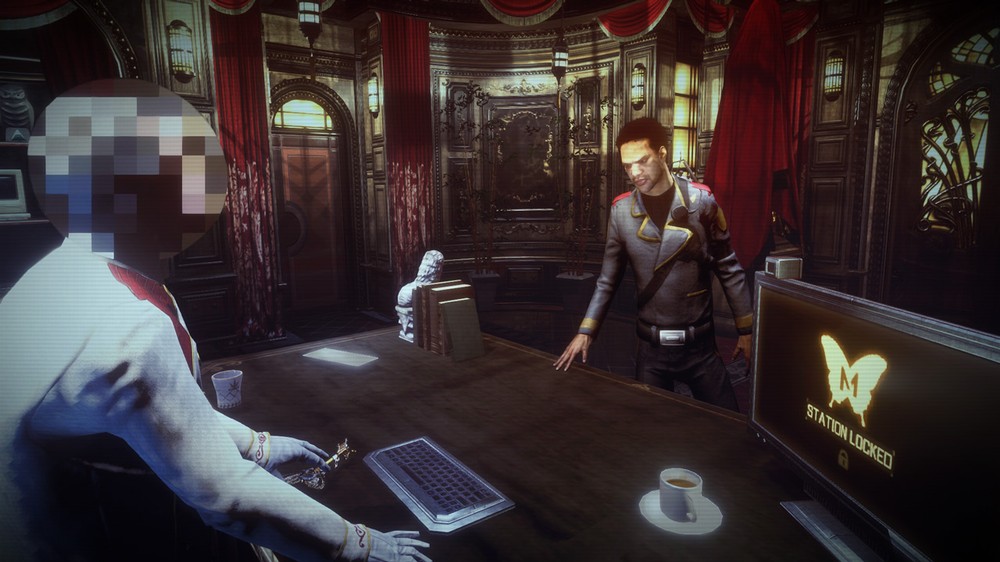 Republique’s gripping story is definitely one of its biggest highlights and it is all thanks to a well written story and a voice cast of prominent actors including Metal Gear alumni David Hayter, Jennifer Hale (Mass Effect), Dwight Schultz (A-Team) and Khary Payton (Cyborg of Teen Titans) not to mention the excellent voice work done by Rena Strober as the voice of our young Hope. Even her naïve performance in the rather odd episode four is great. Though I have to admit I did love the Data Broker’s rhyming conversations in this episode. While Episode 4 deviated from much of the mechanics in the previous episodes its content was very much crucial to the story at large and actually a welcome change from the mostly indoor levels. The music that you hear throughout the episodes is some of the best I’ve heard

At the end of my first story run of Republique I was left wanting more yet ultimately felt like I had done exactly what I was asked to do by helping Hope achieve her goal even during the story’s most emotionally charged moments. The stealth gameplay and puzzle-solving are excellent though the troublesome auto camera switching make things a bit more difficult than they need to be. That said the issues with the camera mechanics and the lackluster AI are but mere drops in the data stream that is Republique. If you haven’t experienced it on your favorite mobile device yet then I highly recommend picking up Republique for the PlayStation 4 today. 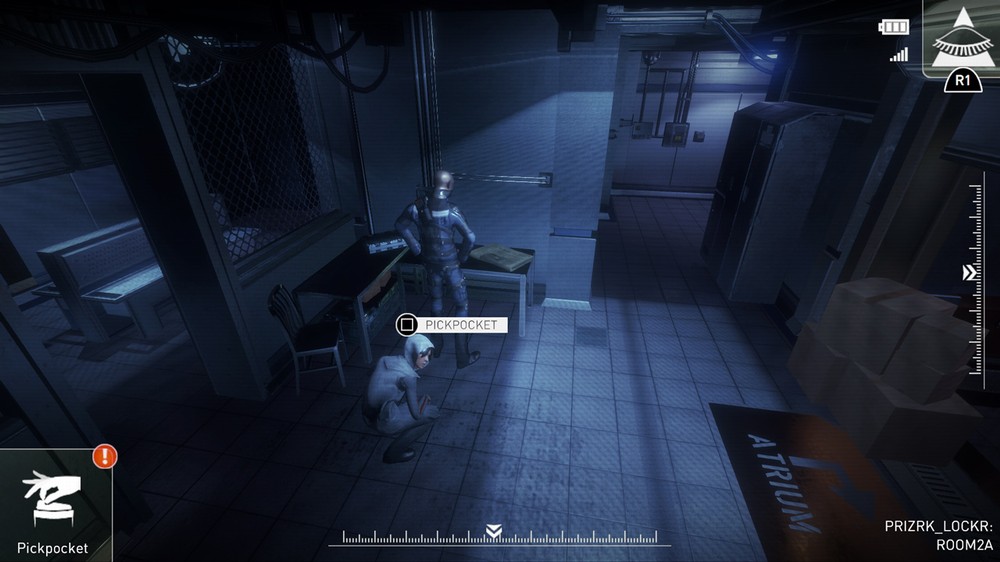 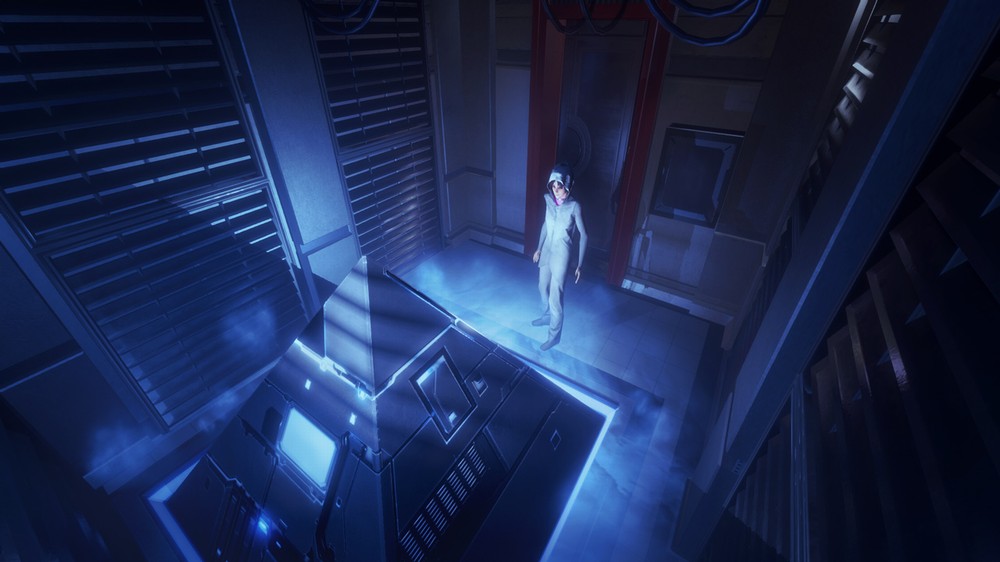 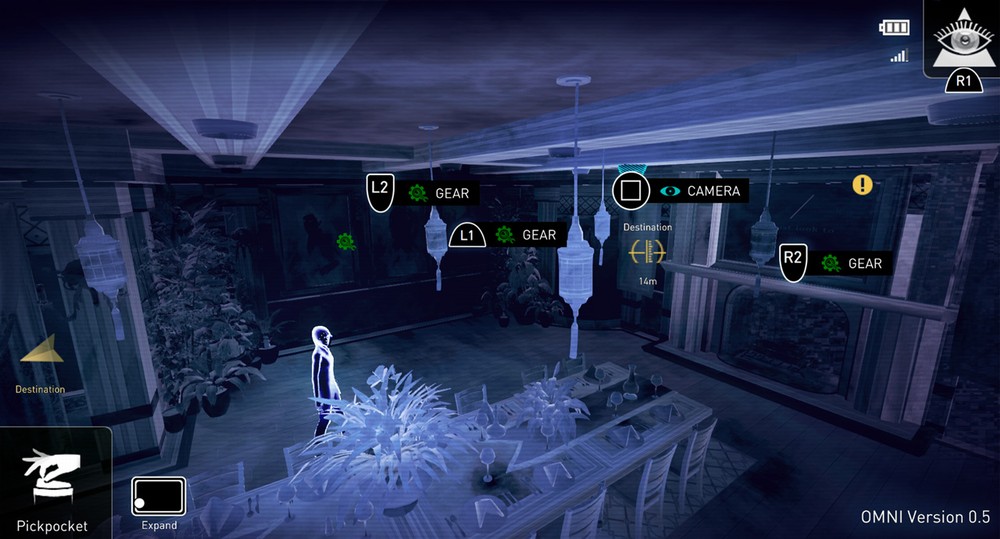 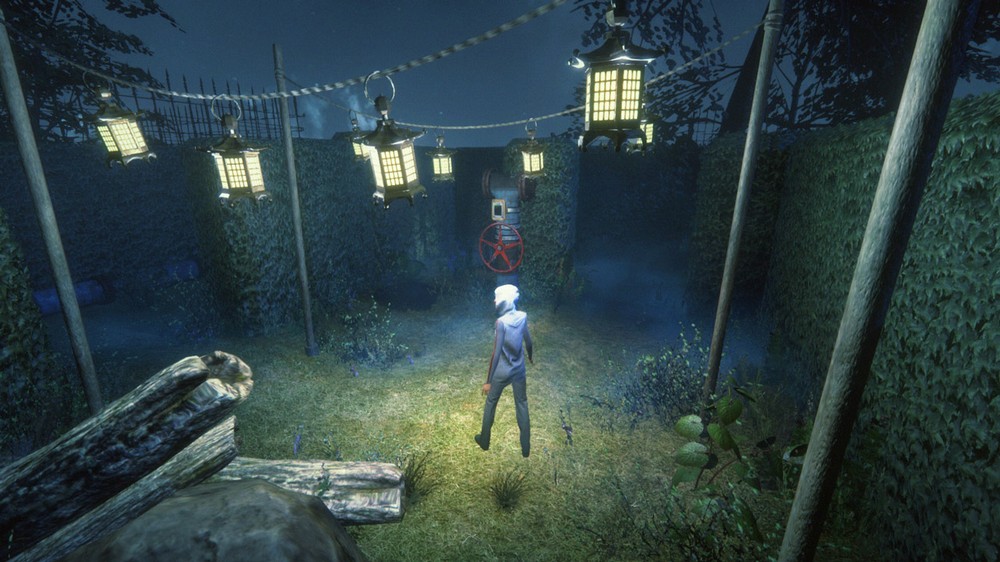 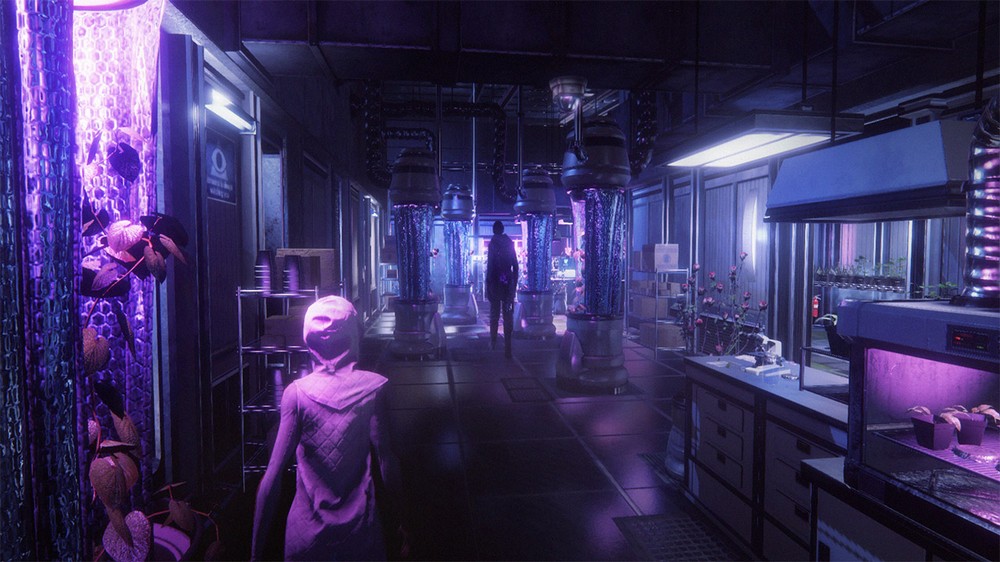