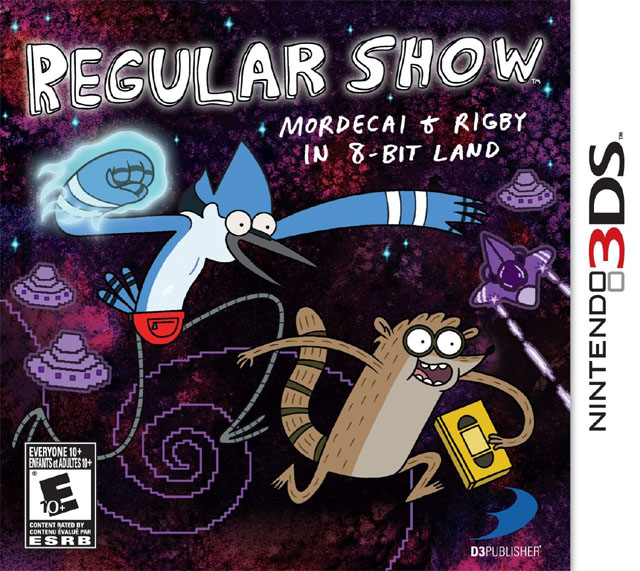 Good visuals and audio and some creative levels

The music sounds good and the graphics are strong as are the ties to the show but this is one outrageous adventure that doesn't quite live up to WayForward's other licensed endeavors.

Being born in the 80’s has given me a greater view of just how much gaming has changed over the last three decades. In that time I’ve felt that games have gotten comparatively easier while the graphical advancements have skyrocketed. Now that isn’t always the case as there have been more than a few franchises known for their difficulty. There are a few companies though that have been bringing that old school vintage toughness back recently including developer WayForward, a company who’s work I’ve become very familar with over the last few years.

Regular Show: Mordecai and Rigby in 8-Bit Land, based upon the Cartoon Network show by creator J.G. Quintel, is one of those platformers that brings the show’s two main characters and serves them with a huge slice of nostalgia and frustration. The premises of the game much like the show has park workers and slackers extraordinaire, Mordecai the Blue Jay and Rigby the raccoon, once again shrugging off work and opening a package addressed to them. Much like a hyper child on Christmas the two find a game console and promptly get themselves sucked into the game. The only way out is for them to do what they like to do best and beat the game.

Mordecai and Rigby in 8-Bit Land at its very core is a platformer, something WayForward is very familiar with based on what I’ve seen and played of their other games, as you navigate either of the two characters through the interesting choices of level design in each world. A lot of this title’s levels are either incredibly chaotic or cleverly orchestrated to allow you to use both Mordecai and Rigby’s specific abilities. Mordecai, who I spent most of my time playing, can double jump reaching higher locations or platforms while Rigby can navigate small tunnels and move across multiple small platforms without a second thought. Often times the level designs requires you to switch between the two on the fly mid-jump which is cool. 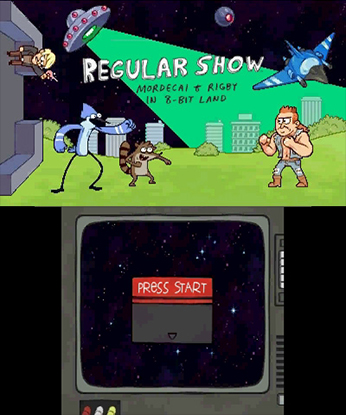 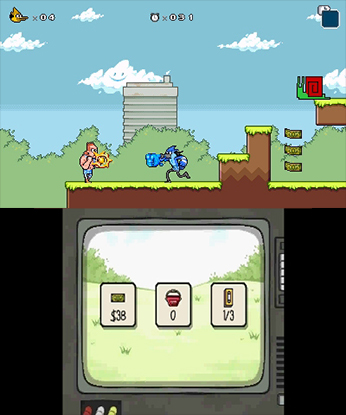 What isn’t cool is how much Regular Show: Mordecai and Rigby in 8-Bit Land sticks to old traditions. Seriously if you hate seemingly cheap deaths like not sticking a landing that you think you should have made, then well…you should probably get out of 8-Bit Land now. Enemies can be defeated by the usual means of jumping on their head though if you’re off by a few pixels from their sweet spot then its an instant death. The only exception to that rule is if you managed to procure a power up somewhere in most of the levels you can take an extra hit as well as attack enemies from a distance with lasers or a launching fist attack.

In another taste of nostalgia, Regular Show: Mordecai and Rigby in 8-Bit Land also features two other game types in the 2nd and 3rd world. One is an old school side-scrolling shooter featuring Mordecai in the style of Gradius and the other has Rigby shooting his way through top-down shooter levels similar to games like Gauntlet. Of the two, I have to say that I enjoyed Rigby’s shooter segments more as the controls for his segments are a lot easier to use as piloting Mordecai’s ship is awkward at times. The final world will require you to use all three game types randomly to make it through to the final boss. Each world has a boss all of which come from the show including the goose robot from the show’s fourth season. Don’t be surprised though if you see a lot of the “Lives” screen though as I cannot count the number of times I died from stupid mistakes or cheap shots.

My favorite thing about Regular Show: Mordecai and Rigby in 8-Bit Land has to be its chiptunes audio and graphical presentation. It’s quickly apparent that the show’s creator and game developers worked together to capture the show’s art style as well as its main characters and villain cameos. While the game’s title is a bit inaccurate graphically, more along the lines of 16 or 32bit the graphics look really good which is something that I expect more and more from WayForward? There isn’t a lot do spoken dialog so you’re just left with the background music and sound effects both of which fit nicely with the era of gaming that is showcased here. They even bring the shows theme into the game as a nice touch.

For those that like the little extra challenge there are three golden VHS tapes hidden throughout each level as well as a duffel bag of cash. The cash from the duffel as well as cash gained from defeated enemies, that constantly respawn adding to the difficulty, can be used to earn extra lives or cash in a game of chance. There’s even the chance to get a bonus if you can get through the level within the time limit though there is no penalty for not finishing a level in time.

Regular Show: Mordecai and Rigby in 8-Bit Land isn’t WayForward’s first attempt at a platformer and at times it definitely shows. Controls aren’t perfect, especially during the shooter levels and cheap deaths make this one outrageous adventure that doesn’t quite live up to WayForward’s other licensed endeavors. The music sounds good and the graphics are strong as are the ties to the show but that’s not quite worth the overall frustration that’s anything but Regular. 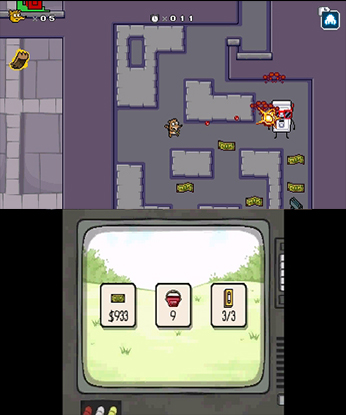 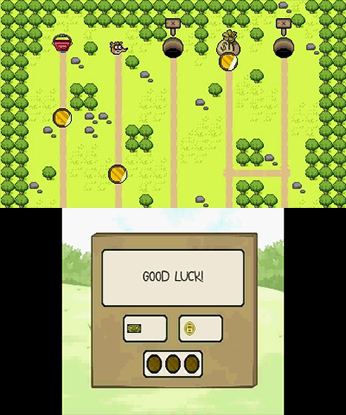 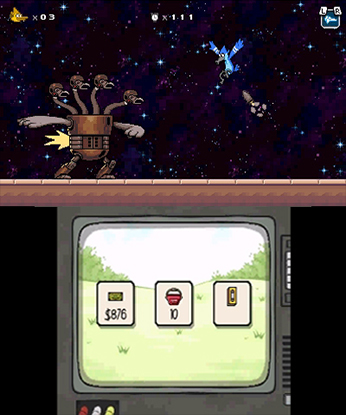 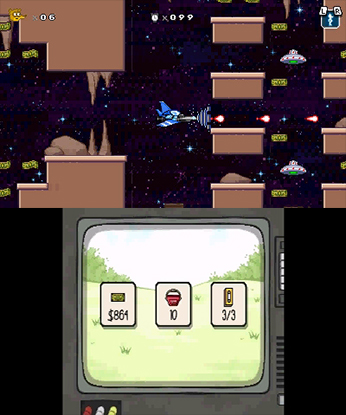 Playable in 2D and 3D