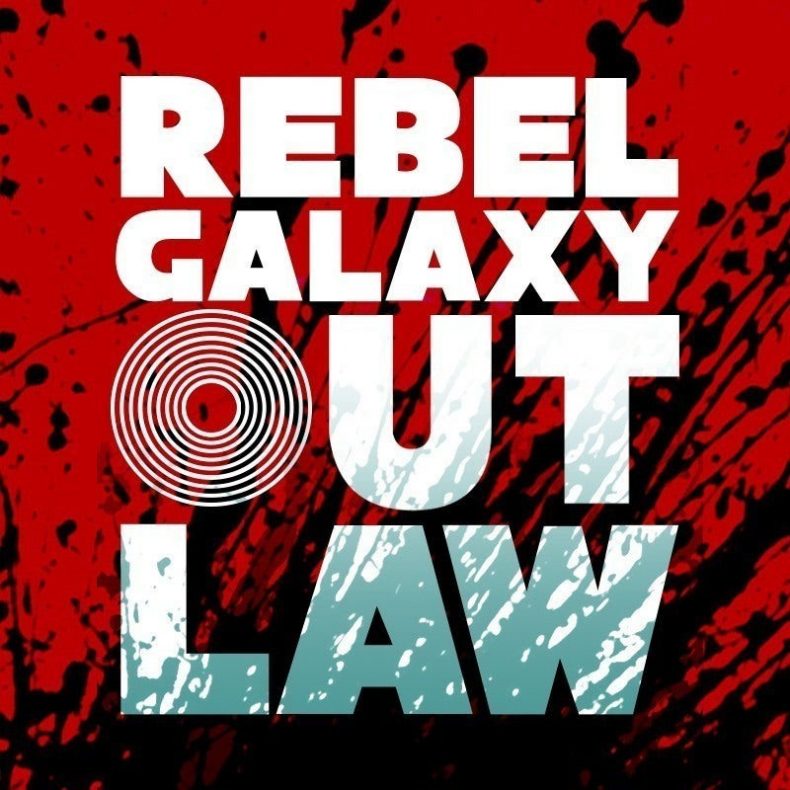 - Difficulty scaling is sometimes an issue, especially early in the game, as random encounters can sometimes be more difficult than you are prepared for.
- Game only saves when you dock at a station, so a lot of progress can be lost if you are too greedy and you get unlucky with a deadly random encounter.

Get this if you want a space trading action game that checks all the boxes for endless entertainment.

Rebel Galaxy Outlaw is a prequel to its predecessor Rebel Galaxy, which featured a procedurally generated star system that you could explore while flying large, capital-sized ships and engaging in third-person ship-to-ship combat. This game changes the focus by putting you directly in the cockpit of somewhat smaller ships – Millennium Falcon vs. Imperial Destroyer for a much more personal experience mirroring classics like X-Wing vs Tie Fighter, Wing Commander, and Freelancer. Additionally, one of the biggest complaints about the original was that you were forced into flying on a two-dimensional plane, unable to pitch up or down in your ship. In this new game, you are fully in control of the ship and are able to fly along all six degrees of freedom.

In Outlaw you are flying in a more hand-crafted part of the galaxy, called the Dodge Sector, where all the star systems are named after US states, especially ones that cater to the outlaw or wild-west mythos, like Texas, Missouri, Colorado, Arizona, etc. The planets and stations that populate these systems are similarly named after cities within those states, like Austin in the Texas system, or Ozark in the Missouri system. This, plus the heavy drawl on the tongues of the various characters you speak to along your way, the dirty dive-bars you spend time in, drinking beer from the bottle, playing pool, dice, slots, or old video-arcade machines to while away the hours between palm-sweaty action-packed dogfighting combat missions or long, lonely space-trucker missions hauling valuable goods from one end of the sector to another, listening to classic rock or country and western on the galaxy radio stations, firmly plants you in the mindset that you’re a space cowboy named Juno Markev just trying to grab a fistful of dollars and set the record straight between you and a guy named Ruth(less). 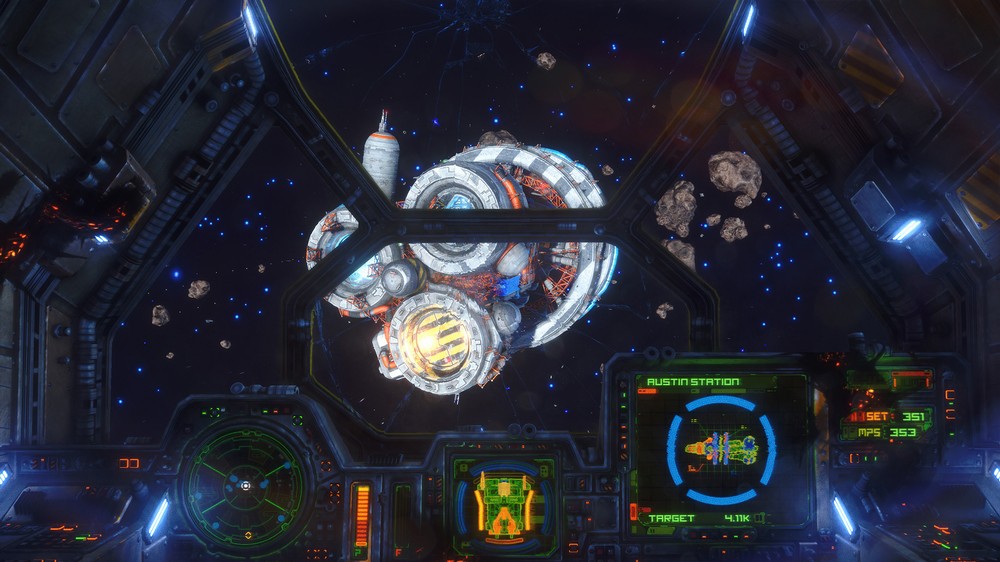 The single player campaign has a somewhat cliché, but still engaging and entertaining storyline that you can follow at your own pace, taking the “story missions” as you feel ready to tackle them, and spending the rest of your time perusing the mission boards, trying to buy low and sell high with the various commodities available at the various stations, or just surviving the random and deadly assaults by the more piratical members of the space-faring community around you and making money off the available bounties. There is also a law system, enforced by the Dodge Police, who will randomly stop you and scan your cargo for contraband and hunt you down if you decide to become one of the pirate-minded members of deep space. Also, if you want something even slower-paced and relaxing than space-trucking and playing the numbers game, you can fly out to any asteroid field with a mining laser and mining scanner and cut your fortune right out of the rocks.

You can also while away the time just exploring the various stations across the sector that all have their own unique charms and layouts. While this isn’t a first-person experience, you will get a 3D image of the part of the station you’re in and then clicking through the menu will take you to another part of the station, including the bar, the mission board, the commodities terminal, etc. Each of the station’s bars are slightly different (if the station even has one) and the amenities that are available there are also different. Some will have an 8-ball table, which as a mini-game is probably a better pool simulation than most stand-alone pool games that I’ve ever played. There could also be dice-poker, which is fun but doesn’t allow you to up the ante on good hands unfortunately, a slot machine which I swear is rigged to let me win just enough to make me think that I’ll end up on top but never quite do, and/or a Star-Venger arcade machine, which is an Asteroids-like game that is way more fun than it should be for a game-within-a-game. You can also stop and talk to the bartender and bend his ear for rumors that are going on in the system. He might tell you about hidden loot that might be stashed in certain quadrants, or about the presence of high-bounty baddies that have been seen roaming around. 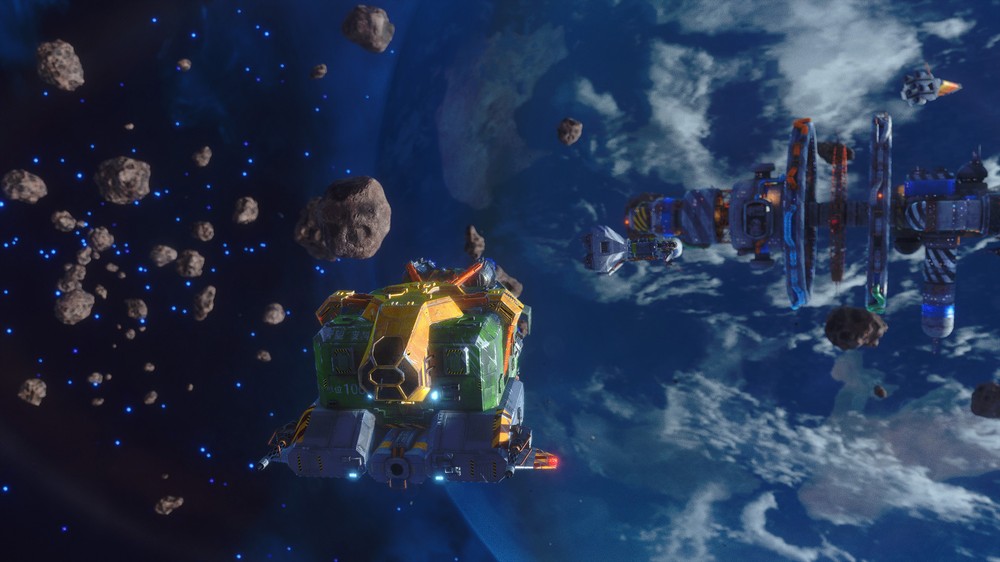 You start Rebel Galaxy Outlaw with just enough cash to pay for gas and a loaner ship that is a converted garbage hauler. Obviously, hunting down the big bad guy that Ms. Markev has a bone to pick with in that piece of junk isn’t going to fly any better than the ship itself, so you spend a fair amount of time trying to upgrade your way into a bigger boat with better guns, more cargo, and stronger shields, just to ensure that you might live the next time you take the plunge and jump through a gate into a lawless system and get jumped by a squad of half a dozen bloodthirsty pirates who would rather sort through your scrap than bargain with you. The progression feels good in this game, too. There are just enough various ships, weapons, and components, to give you a sense of increasing your power, as you play, without so much as to make you feel overwhelmed with options or like you have to create a spreadsheet just to keep track of everything you need.

Actually, I think that’s the thing that makes Rebel Galaxy Outlaw shine. At its core, it really strikes that balance of giving you just enough to make you feel immersed in a world that feels alive, but not so much as to drown you in choices. The sector isn’t impossibly huge, but it’s big enough that getting from one end to the other takes a fair amount of time (jump drive sold separately). The combat is engaging, but fast-paced and fun, without giving you a thousand different buttons and functions you have to remember just to take off. The systems are varied and enjoyable without making you have to watch a thirty minute YouTube video on how to be a better miner. You can engage with the game at whatever level you want. If you want to play with a full HOTAS setup, you can. If you want to play with a mouse and keyboard, you can. If you want to play with a controller, you can. There are options for aim and flight assistance, which will make combat easier for those who don’t want to have to be pinpoint accurate with their flight skills, but there are options to turn those assists off as well, for those who want the extra challenge.

That brings me to one point that is probably my only actual complaint about the game. The fact that the random encounter aspect of the game can, every once in a while, especially early in the game, throw you into a situation that is way bigger than you can handle. This combined with the fact that the game only auto-saves whenever you dock at a station, can make for some frustrating moments where you realize that you just lost a bunch of progress with the game because you decided to take one more jump rather than dock and grab a beer and then you got clobbered.

There is a comms system built into the game where you can plead for mercy with your attackers and I’ve found that it often does result in them letting you go. However, this is not 100% successful, and sometimes there just isn’t much you can do. As you progress in the game, though, you will get armed with more powerful weaponry, better shields, bigger ships that have more hardpoints for even more guns, and so forth, so combat gets more manageable. You can also make friends with certain NPC’s that you can call upon for backup, usually having them arrive within about 10 seconds of your calling for them. This has saved my bacon more times than I care to admit.

I mentioned the radio before, but holy cow; Rebel Galaxy Outlaw is on par with the GTA games when it comes to the music. There are about a half dozen radio stations, each with their own unique flavor and they’re all great. I don’t even like country music, but found myself bopping my head along with the selection on that particular station because the songs were just so perfectly suited to the atmosphere and feel of the game. The music is also peppered with commercials for setting-specific locations and commodities, that just lends more to the deeply detailed and immersive experience that the game creates. Streamers can also pick a copyright-friendly playlist that filters the 400+ song list down to just the unlicensed tracks.

Even though Rebel Galaxy Outlaw is a single player only game, I felt more engaged and part of a living-breathing galaxy than I did in the hundreds of hours of playing Elite Dangerous, which is saying quite a bit since, if you have read my lengthy review of that game and its expansions, you would know that I was a big fan (and, in some ways, still am). 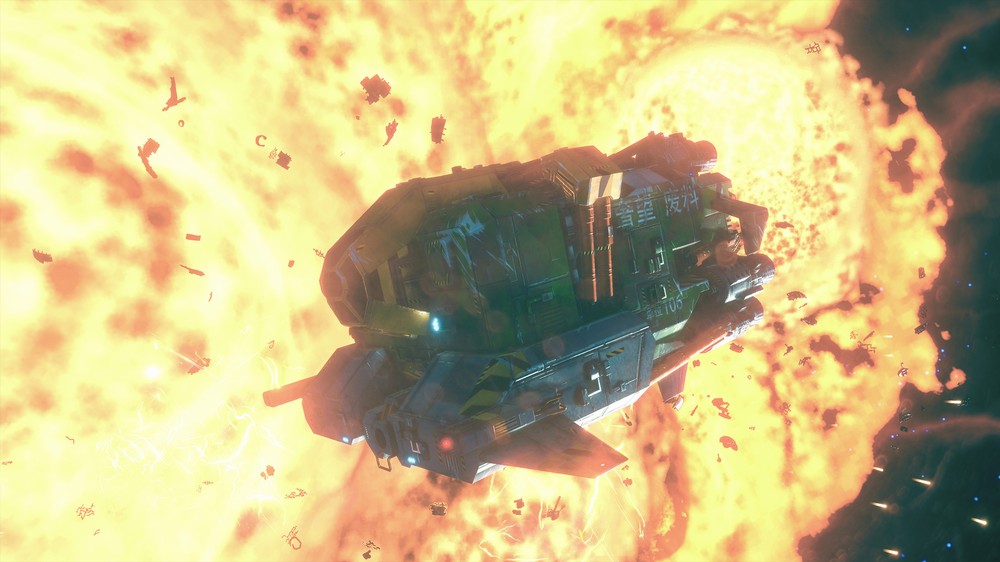 Overall, I have already put more hours into Rebel Galaxy Outlaw than I put into most games, just because of its charming, engaging, enjoyable setting and the extent to which it goes to let you be a part of it. Simply letting you actually play pool (for money or ship parts) is a stroke of genius that makes you feel so much more attached to the world than if it were just a game about flying around in the cockpit of a spaceship.

This game is well worth even double the asking price of $30. I’ve paid way more for other space games that have been way less enjoyable. This isn’t even taking into account that modding is going to be fully supported for the PC version of the game once the mod kit is shipped to owners of the game, which will open up the door to gobs more fan-created content. And if you’re looking for my take on the Epic vs. Steam debate…keep looking. If you want the game now buy it where you can get it. If you need to have it on Steam, wait 12 months and get it there. The game will also be available on PS4 and Switch as soon as those versions are ready to launch.  Regardless of your choice of store or system, you owe it to yourself to experience the long-awaited rebirth of the space trader combat sim.