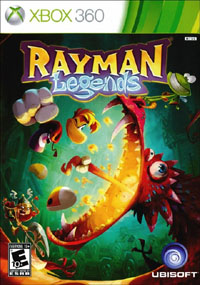 A perfect follow-up to Rayman Origins with improved gameplay, fantastic visuals, and an epic soundtrack.

If there were any case for the argument that platform gaming is dead, then Rayman Legends effectively silences it. Superstar game designer Michel Ancel and his limbless hero have returned once again with a superb follow-up to 2011’s critically acclaimed Rayman Origins. While gamers might initially cry foul with Legends’ Origins-esque visual style and 4-player cooperative gameplay, Legends quickly proves that it is indeed a worthy successor with unique gameplay and design that help the new title rise above the bar firmly set by Origins.

As uncouth as it is to rate a game by its graphics – the old judging a book by its cover comes to mind – it really is difficult to discuss any Rayman game without immediately focusing on the visual splendor that has become hallmark of the series since its inception in 1995. Rayman Legends takes the already psychedelic visuals of Origins, and gets downright trippy with layer upon layer of vividly-colored and meticulously-detailed set pieces. Each successive level improves on the previous with increasingly wild and whimsical backgrounds that react dynamically to the action occurring in the planes of play. Just when you think you’ve seen it all, things get even weirder – and more fascinating.

The characters – while outwardly appearing to be paper-thin two dimensional sprites – are actually fully animated models that move fluidly in exaggerated, yet humanistic motions that give the game a personal feel despite the cartoon-like appearance. Fan favorite Globox returns as a playable character as well as the loveable Teensies. New to the series are female characters, Barbara and her nine sisters – each of which through the course of the game become playable characters as well. 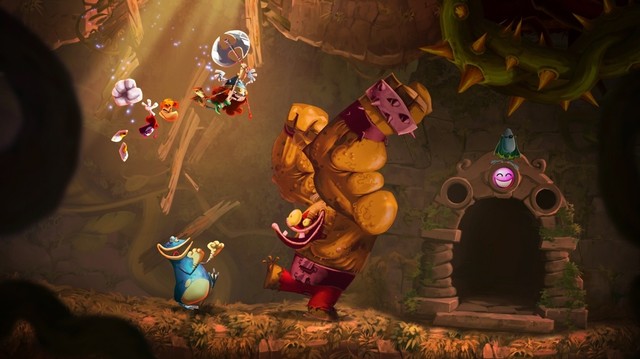 Taking place a century after the events of Origins, the Magician has once again captured the Teensies, as well as the land’s ten princesses (i.e. Barbara and her sisters). Rayman and Globox are awakened from their slumber to help free the scores of captives from their cages and free the land from the evil grip of the evil Magician. Along the way, they will have to battle a series of ridiculously powerful bosses that emanate from the Bubble Dreamer’s nightmares. If you think this sounds an awful lot like the plot of Origins, you would be right, the two are very similar, but then again who ever questioned why Mario had to keep saving Princess Peach, right?

The story is only the vehicle to get players hopping and bopping in the 2D platforming gameplay, which is precisely where Rayman Legends displays its true legitimacy. Legends delivers some of the best 2D platforming outside of Nintendo’s recent classic New Super Mario Brothers. While many would argue that Michel Ancel has made a fine career out of improving upon the established work of Mario Brothers creator Shigeru Miyamoto – which is a valid point. However, the Rayman series has always seemed as much as an homage to Nintendo’s cornerstone franchise as it has a competitor. The fact that Rayman Legends was actually first designed and released for the Wii U (and the console where Rayman can unlock an exclusive Mario costume) proves that there are few hard feelings between the two game makers.

Rayman Legends puts more of an emphasis on cooperative (or co-op as we reviewers like to say) play than its predecessor, with gamers tasked to simultaneously perform certain duties like flipping levers, cutting ropes and the like. Returning to the fray is Rayman’s old friend Murfy, tagging along to help single players perform the necessary co-op duties. Murfy is sent with a simple press of a button to perform the necessary action, making timing of the utmost priority.

The gameplay is decidedly 2D, but the action will take gamers all over the 120 levels the game offers. Hidden objects are stashed away throughout the beautifully rendered levels, and gamers will find themselves driven to search every nook and cranny in order to unlock achievements and additional gameplay levels – including levels from 2011’s Origins. 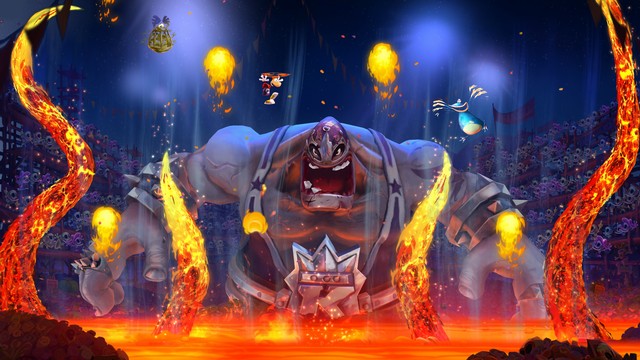 The boss characters – the Nightmares as they are referred to – are simply fantastic. With some of the coolest character design yet seen, these bosses are every bit as beautiful as they are tough. Heck, half of the difficulty in finishing a boss in Legends is the fact that they are all so mesmerizing in their design and movement, that you forget that there is serious business at hand, as you stare at the screen dumbfounded. In all seriousness, while each of the bosses are tough, the overall challenge level is fairly well balanced – seeming to increase and decrease automatically depending on the number of co-op players (if any) to keep things challenging, yet enjoyable.

Speaking of co-op, Legends features the same 4-player gameplay of Origins. Sadly, the co-op is still limited to local play – meaning no online action. While this did not necessarily detract from the overall enjoyment of the game, it would have been nice to have the option to link up with friends over Xbox Live. 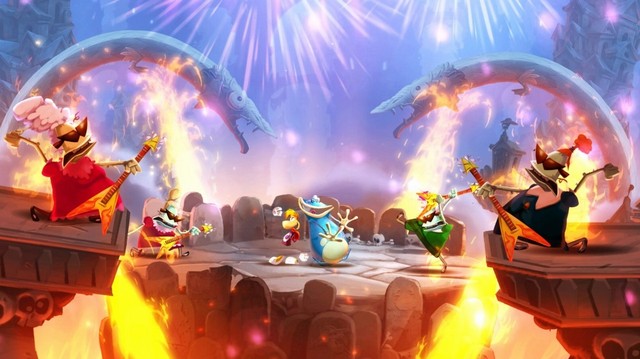 I already addressed the outstanding visual presentation, but I have not touched on the audio. If I had to sum up the audio in one word, it would be: EPIC. Particularly the background music, which ranges from huge orchestral soundscapes to head-banging heavy rock – and we are not talking your typical stock music tracks, as the rhythms and melodies play an integral role in the gameplay. Many of the game’s compositions are riffs on classic songs (Black Betty, Eye of the Tiger), but all are amazingly unique. Just to give you an idea of how serious Ancel and company were about Legends’ audio – a quick search of the internet will show that the Rayman Legends soundtrack features an astounding 47 unique (and amazing) tracks.

Did I mention that the game features 120 gameplay levels? Yes, 120 – and that’s not including the scores of unlockable levels, including several retro levels that will take gamers back to the early days of Rayman. In total, Legends packs in over a dozen hours of unique platforming action, making it one impressive gaming package – however, even at that, the release MSRP of $60 seems a bit steep especially if Ubisoft wants to make Rayman a household name again.

My family absolutely loved every minute we spent playing Rayman Legends together. It is the perfect follow-up to 2011’s excellent Rayman Origins with improved gameplay, fantastic visuals, and an epic soundtrack. With over 120 unique levels of play, Legends always had something new and exciting waiting around the corner. 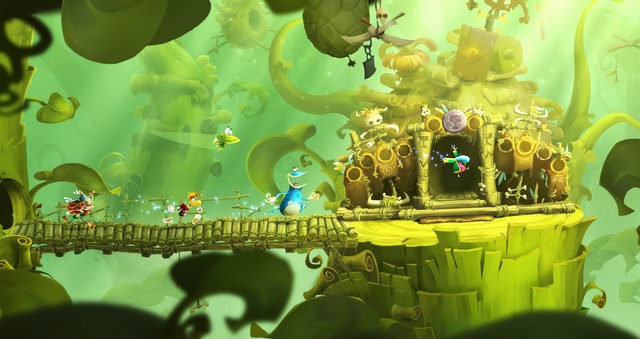 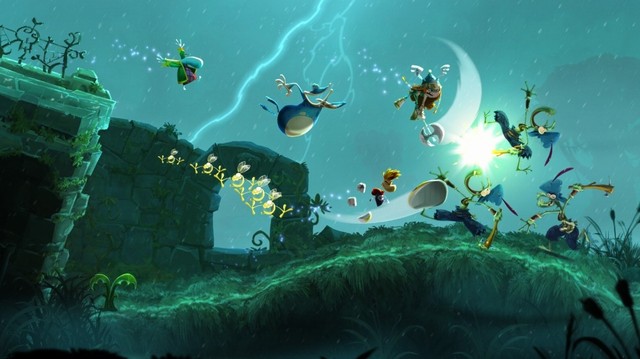 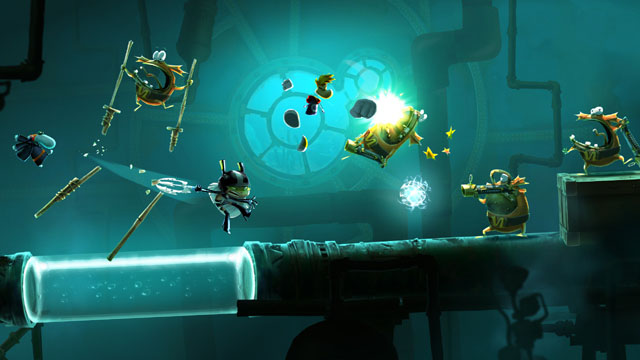 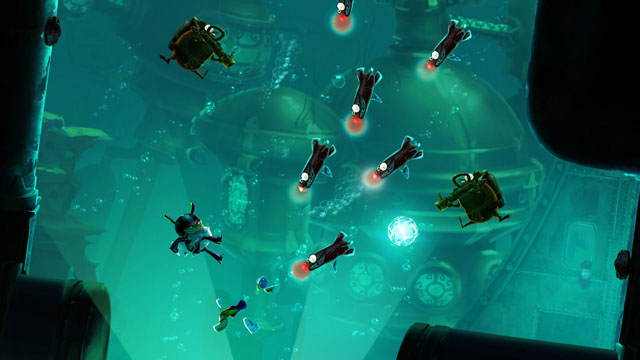 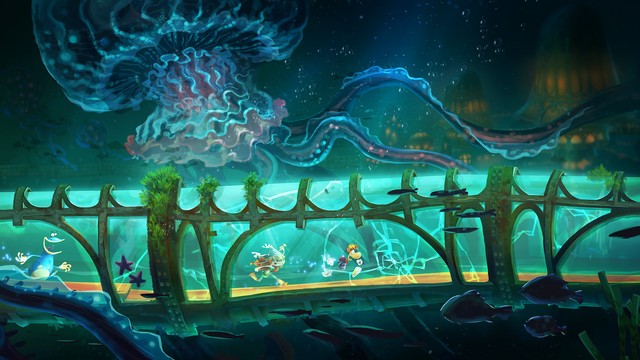 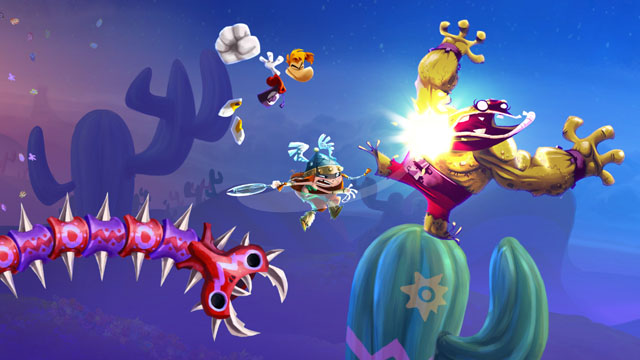 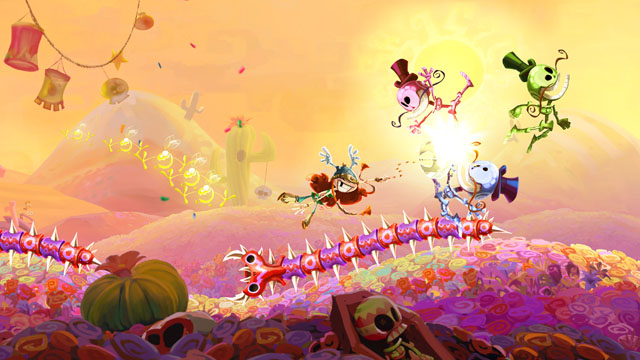 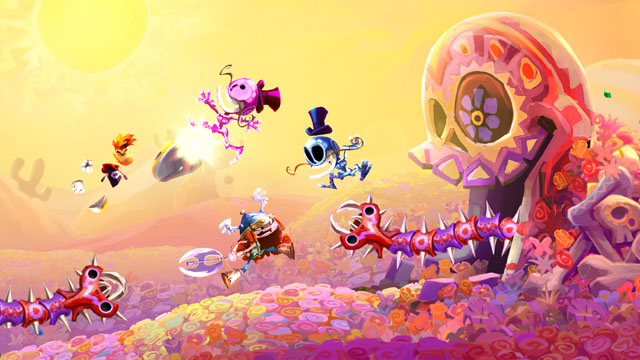 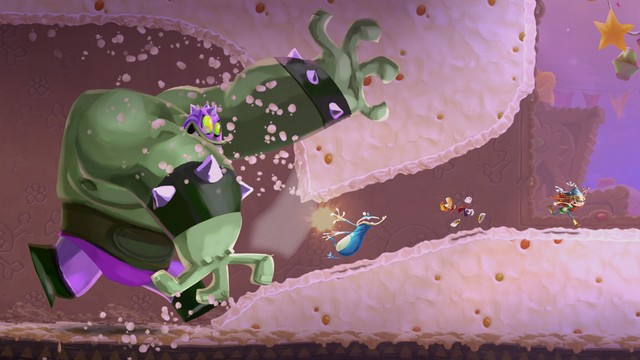 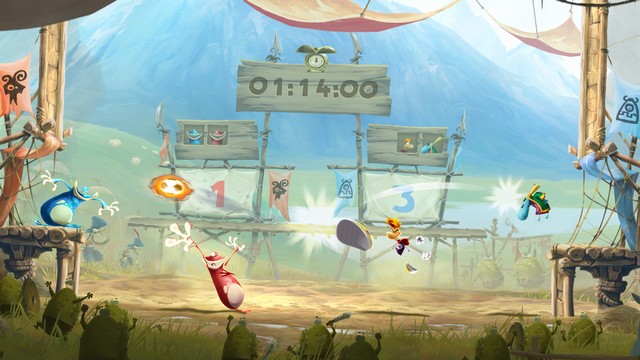 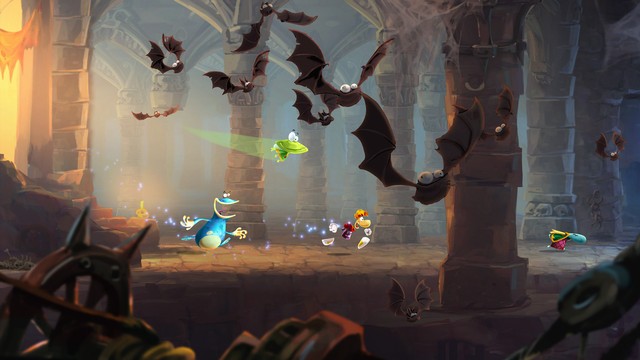 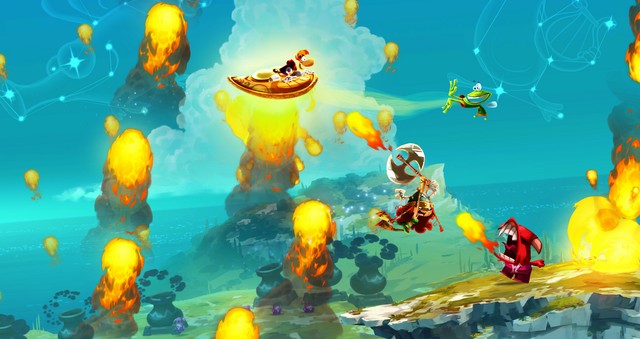 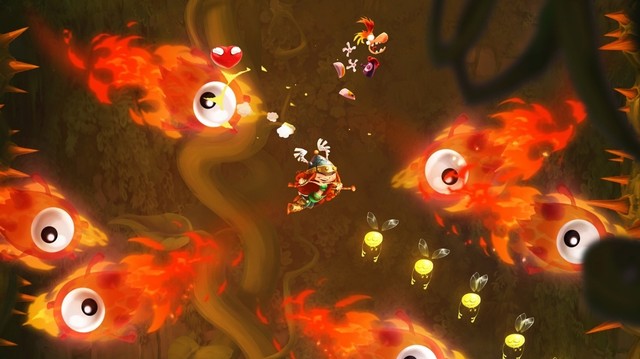 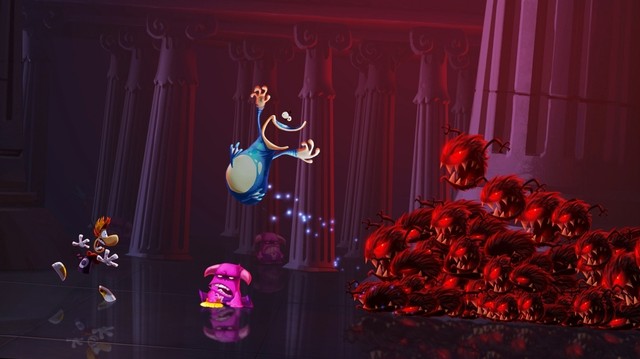 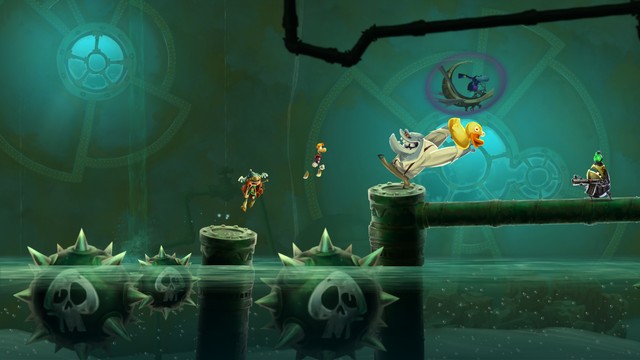 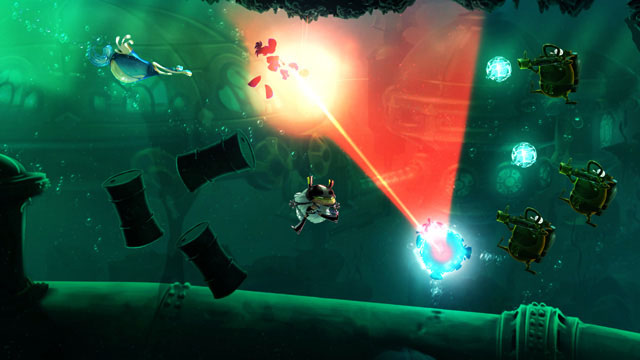 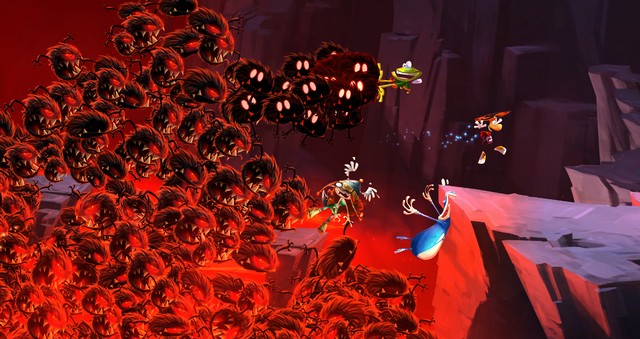 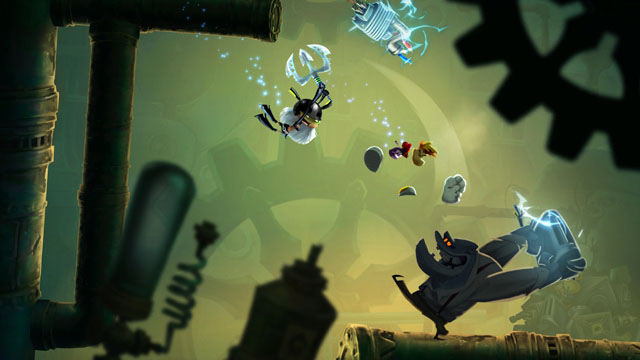 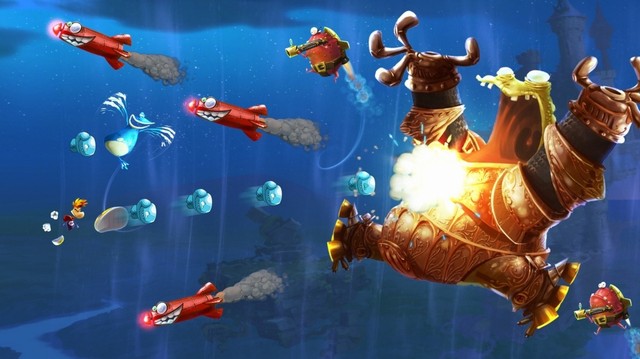 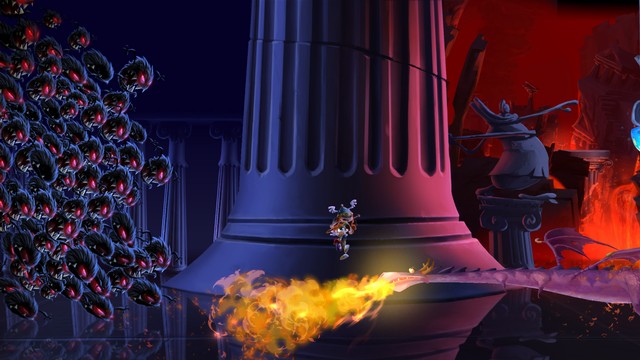 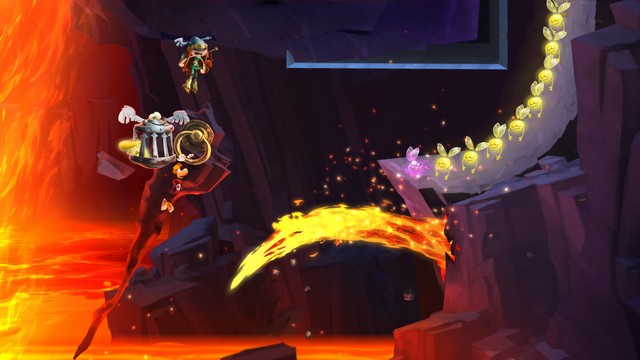 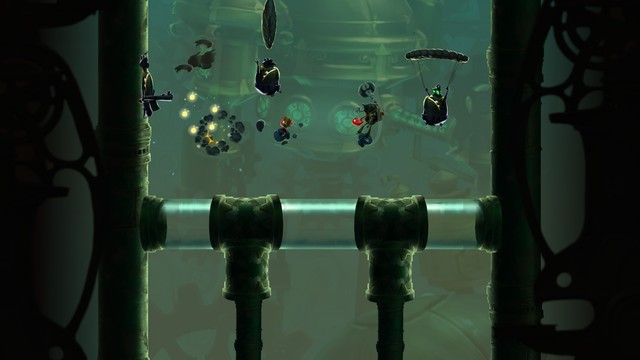 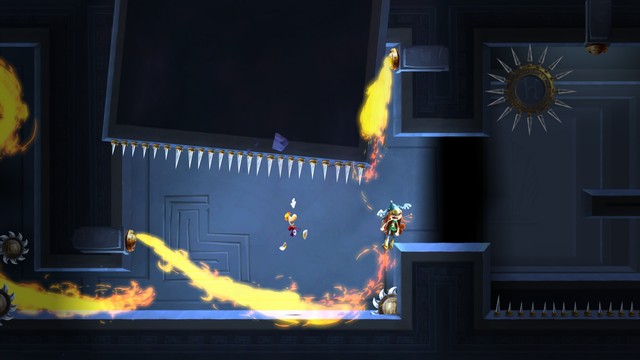 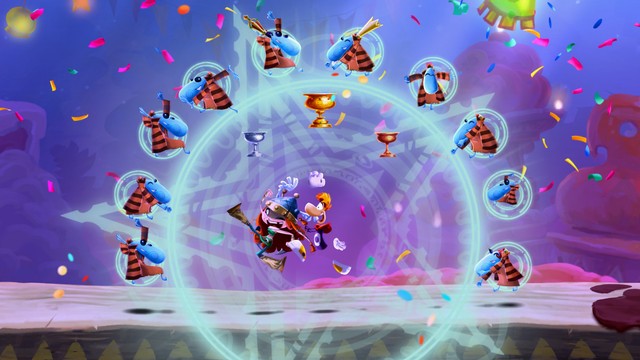