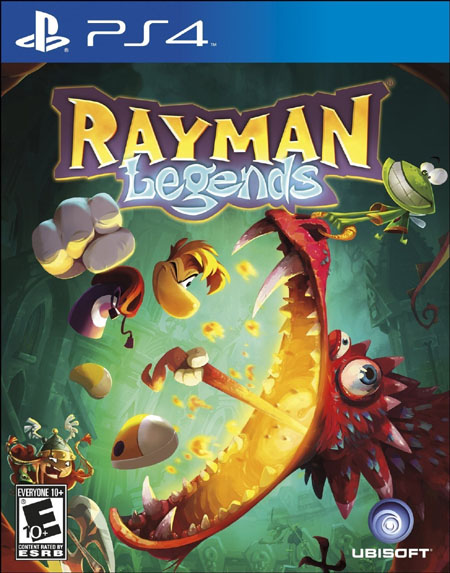 Some areas of gameplay are lacking without touchscreen interactions. Vita cannot be used as a controller, no affordable upgrade path for existing last-gen owners

A must-own "legendary" platformer for next-gen gamers who haven't already played it on last-gen systems.

Last September I was totally addicted to Rayman Legends on the PS Vita and just about the time I finally got that monkey off my back here it comes again, this time even more beautiful and addictive (how is that possible?) than before.  So what makes this game so darn addicting? First, the graphics are simply out of this world; some of the best and most colorful I’ve seen on the PS4 or any other system for that matter.  It’s enough to tempt me to rush out and buy a new 4K UHD TV even though I know it wouldn’t help (but I’m still looking for a reason).   And then you have all of the incredible sound and music, some of which is tightly integrated into physical gameplay, plus a nifty assortment of PS4-specific features like the new camera mode, touchpad lotto scratchers, and even some new characters.

For those who may be familiar with the original game I’ll break down the new stuff first.  Naturally, you can livestream your game using the built-in broadcast feature of the PS4, while the new Camera Mode allows you to pause the game at any point then pinch-zoom and pan around the scene using the DualShock 4 touchpad.  Not only does this allow you to appreciate the insane amount of detail in the game, you can also get some original screenshots to share with your friends.  The touchpad can also be scratched to mimic scratching all those lotto tickets you’ll get in the game complete with realistic scratching noise coming from the DualShock 4 internal speaker.  You’ll also find some new characters including Assassin Ray (inspired by AC4 Black Flag), Funky Ray unlocked using Uplay points, and Champion Ray who will be awarded to the best players in the online community. 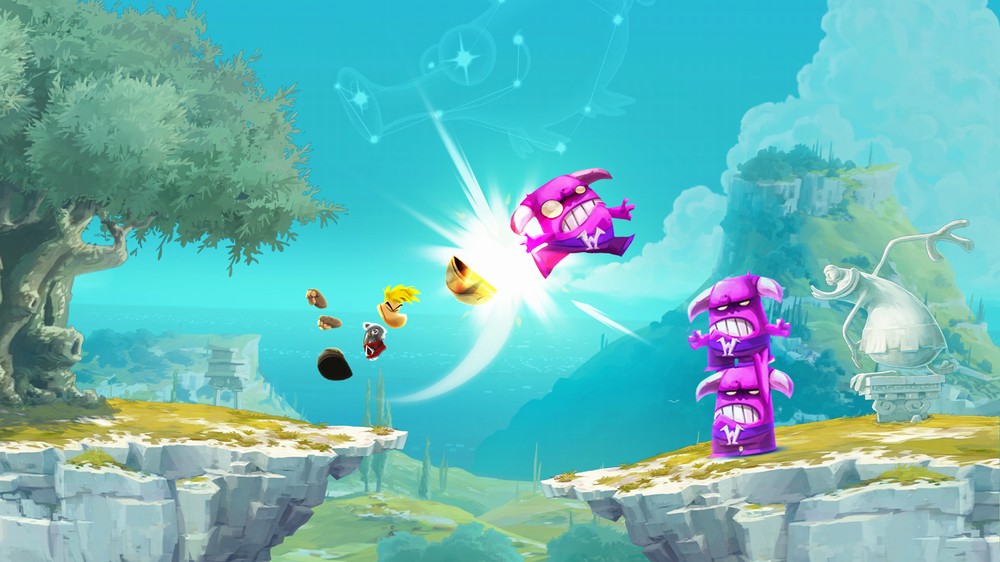 As expected, the online community plays a huge role in the long-lasting appeal of Rayman Legends with various challenges, all on timers, that have you playing certain parts of the game trying to accomplish some sort of goal.  The real-time, post-game feedback is incredibly addictive in that you see people you beat getting knocked off the list and your next set of targeted opponents appearing to the right of your current standing.  The fact that many of these challenges take a minute or less to finish will keep you engaged much longer than you’ll realize with that whole “just one more try” mentality.

The game menu is setup as a series of art galleries that you can walk Rayman (or whatever unlocked character model you are using) around, jumping into any available painting to enter a new gallery specific to a new world of gameplay or options. There is a Creatures Gallery where you can view any unlocked creatures and collect your daily allowance of coins and Lums. Back to Origins is a secondary gallery with five paintings, each leading to their own gallery with eight playable levels in those that must also be unlocked. With all of the nested galleries and paintings it can be easy to get lost in the sheer amount of content, but the magic of the design is that there is no required order in which to play any of it. In fact, as you play and unlock material the game offers to take you to that new content with a tap of a button, so you can essentially just go along for the ride. Only compulsive gamers who feel the need to complete each painting and gallery before proceeding to the next will never need to wander the interactive gallery menus.

Also found in the main gallery is Kung Foot, a multiplayer-only mini-game that has each player trying to jump and kick a soccer ball into the other team’s goal. It’s simple, intense, and extremely fun. Next is Murfy’s Challenges. In these levels you take control of the environment to interact with obstacles and creatures in order to get Globox safely to the end and collect any Teensies along the way.  This was much more fun and interactive with the Vita’s unique control scheme and seems a bit awkward when played with the DualShock 4.  The co-op mode is also similarly and severally hampered by a lack of touch controls. The Heroes gallery has paintings of all the unlocked characters from the game and jumping into any of those switches the main character. It’s a visual swap only, and I saw no difference in the way the game played. 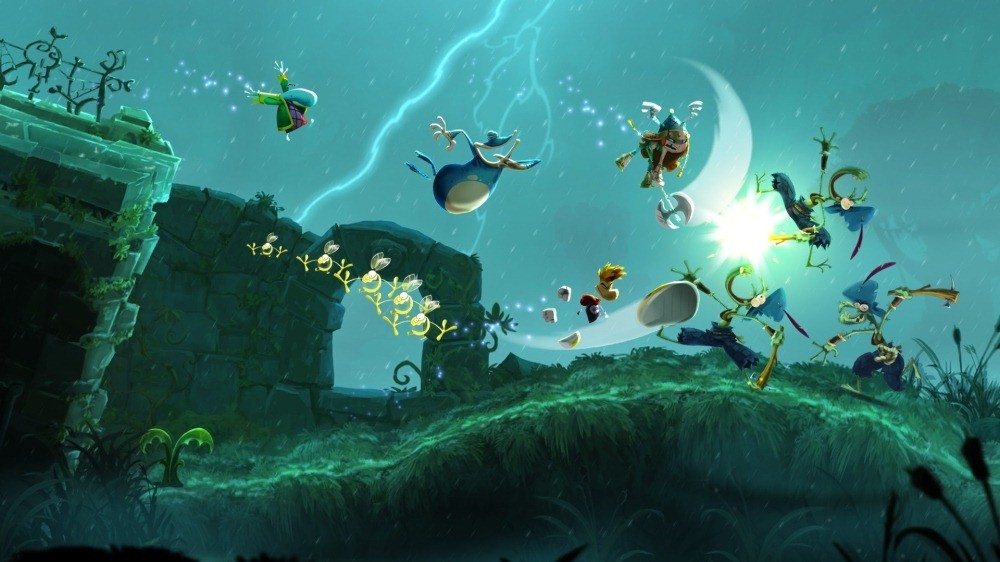 The rest of the paintings in the Main Gallery are dedicated to the new worlds and levels in Rayman Legends. Teensies in Trouble, Toad Story, Fiesta de los Muertos, 20,000 Lums Under the Sea, Olympus Maximus, and Living Dead Party are loaded with amazing new levels that will divert you from all other aspects of your life. Naturally, a lot of the game is locked down but unlocking new content is fairly easy, either by collecting the requisite amount of Lums (which are tallied across all levels), or scratching away at lotto tickets awarded after each level. These tickets are your key to unlocking creatures, Back to Origins levels, and bonus Lums and Teensies.

Gameplay is traditional sidescrolling platform style, at least on the surface. Along the way you will be required to interact with object, but without touchscreen input these interactions have been replaced with button presses.   You can no longer tap and drag over streams of Lums to turn them pink and increase their value and the touch and drag slingshot used to shoot down dragons loses a bit of charm. Also gone are the moments where you got to rotate your Vita to spin objects within the level in order to proceed.   Now your use the L1/R1 buttons to rotate the environment rather than the screen itself.

Rayman Legends is so much fun you will certainly want to share the experience, not just with the optional Facebook connect feature that lets you share stats and participate in daily and weekly challenges, but also in four-player co-op mode.  In addition to competitive games like Kung Foot, you can also play all 90 levels in the game cooperatively.   While the PS Vita works as a remote play device I was majorly disappointed that it could not be used as a secondary controller device, which would have brought the gameplay on par with the Wii-U version. 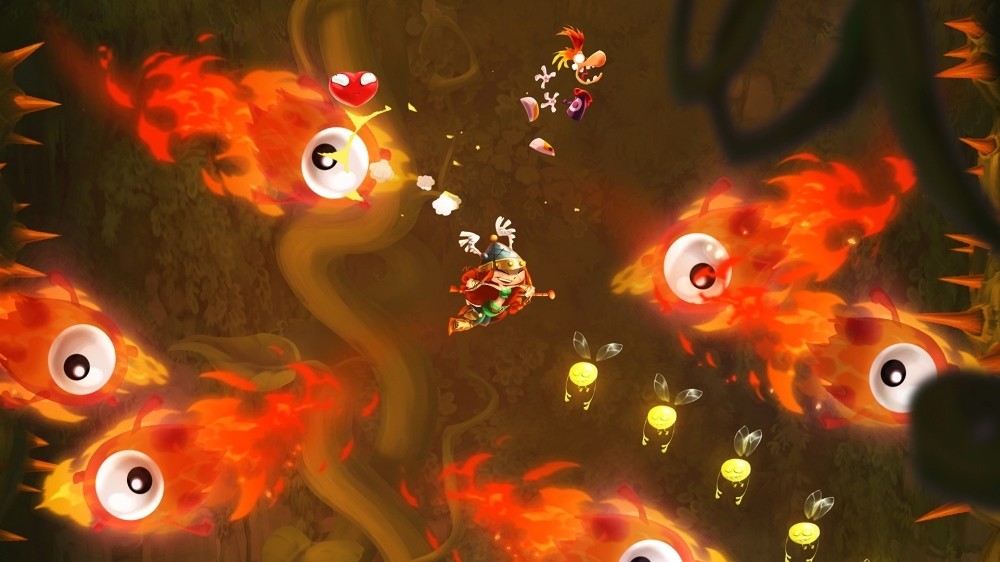 As previously mentioned, the graphics are some of the best in platform gaming, and the PS4 delivers all of the vibrant colors and amazing detail in their pure and uncompressed glory. Rayman Legends is simply a work of art – and with the new camera mode you can appreciate the artistry even more, seeing things you would have missed without the ability to pause and zoom.  The soundtrack only enhances the experience. From the jazzy themes in the gallery menus complete with whistle solos to the interactive music in the main game, each track fits the level perfectly in theme and on-screen intensity. You have whimsical tunes for the more adventurous and exploratory levels and then these raging bass beat orchestrations for action sequences and boss fights, but one only need look (or listen) as far as the Castle Rock level to experience the sheer magnitude of creative inspiration in Rayman Legends’ sound design. In this level the hard rockin’ music (Black Betty) not only drives the action and momentum of your gameplay, but your interactions also help to perform the soundtrack by adding in notes and instrumentation of your own in real-time. That, along with the creatures singing the unintelligible lyrics like demented chipmunks is pure genius.

Rayman Legends offers an unprecedented amount of entertainment, but it is also a game that is entirely unnecessary to even consider if you already own a previous version.   While the graphics are uncompressed there is almost no perceivable distinction in clarity or quality from last-gen systems during actual gameplay.  The game is only $40 but there is no $10 upgrade option like many of the other transitional PS3 games from late last year like Black Flag.  There are a few PS4-exlusivities but nothing you can’t live without.  Actually Xbox One gamers get a better deal with their own custom characters and ten bonus stages.

Simply put, if you already have the game on another system then you can have just as much fun (perhaps even a bit more if playing on Wii-U or PS Vita) and save yourself $40, but if you own a PS4 and haven’t already invested in an earlier copy of Rayman Legends then this is a must-own game and one that you, your friends, and family won’t be able to put down for months to come thanks to loads of content and the endless addiction of those daily and weekly challenges. 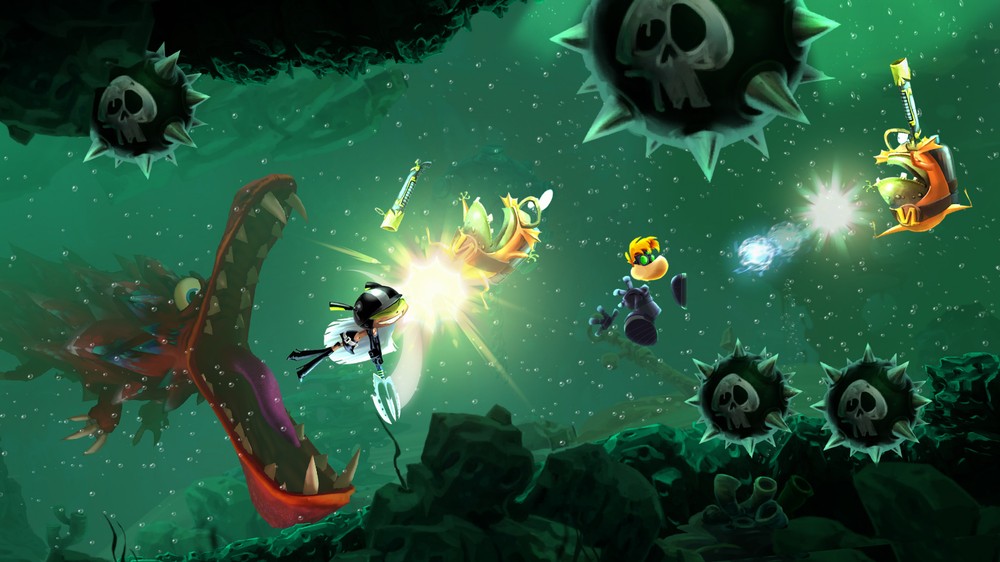 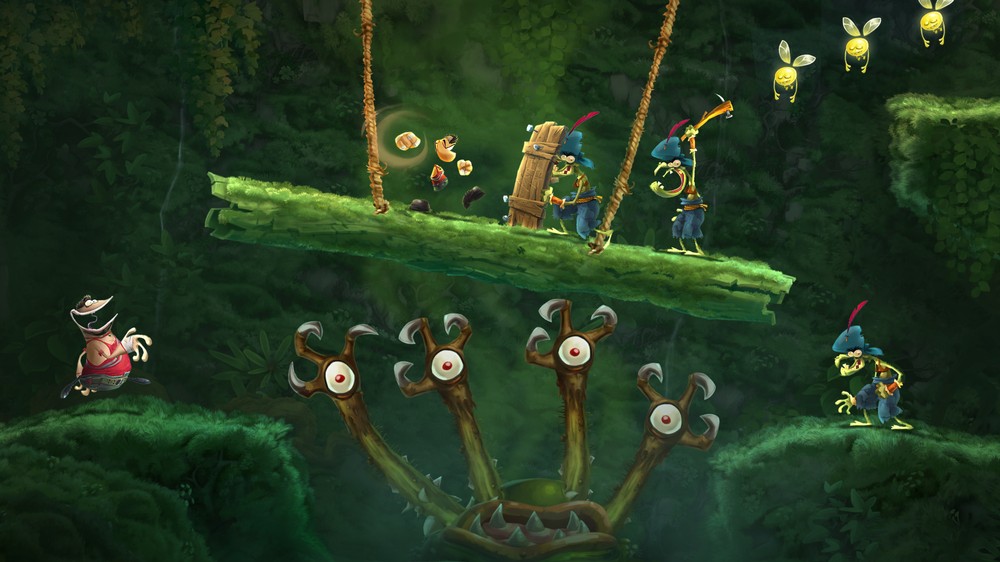 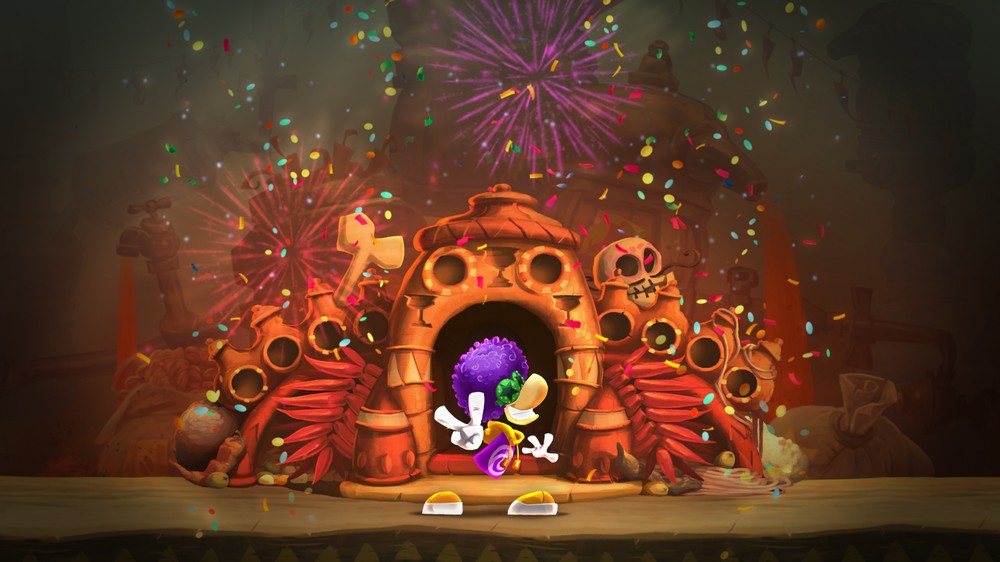 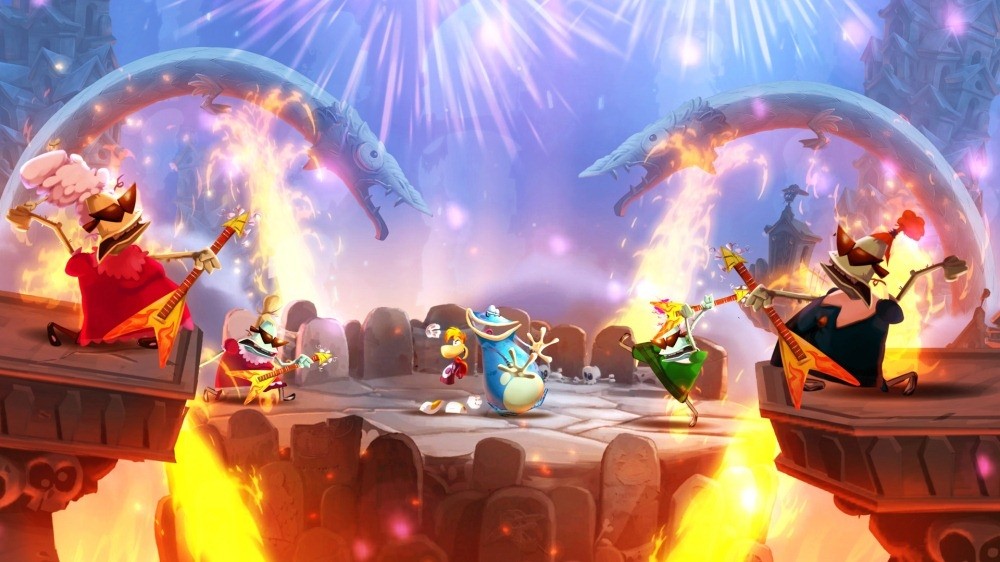 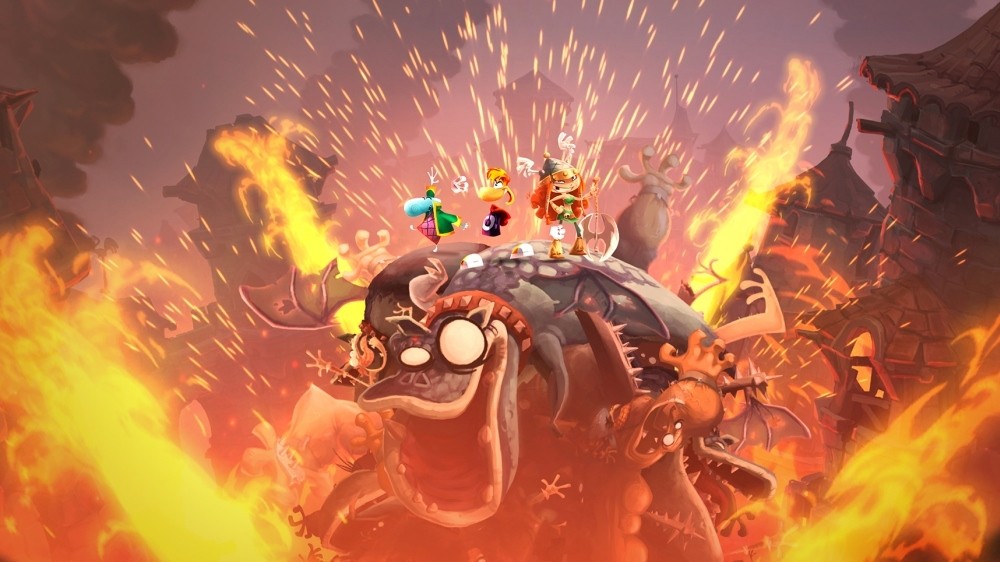 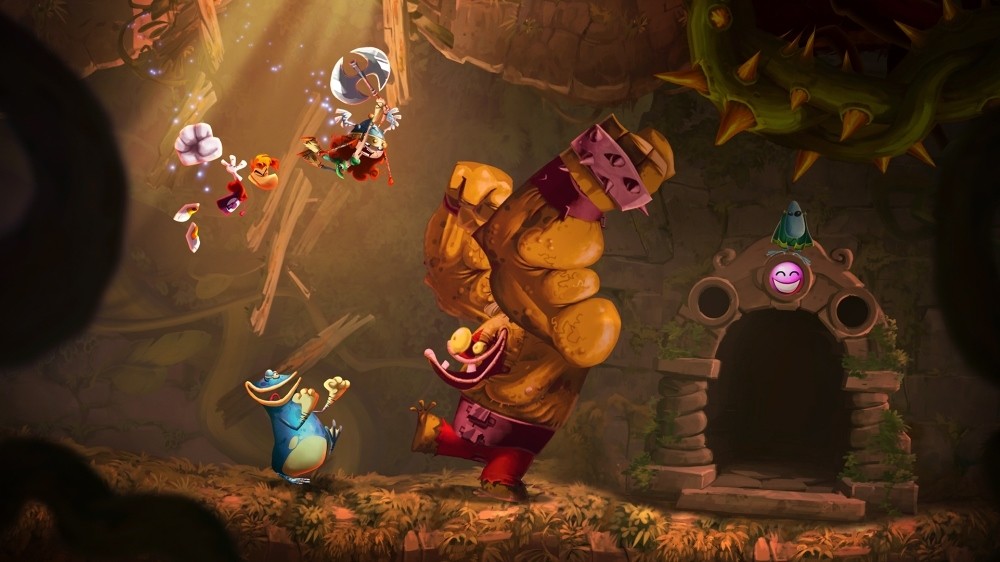 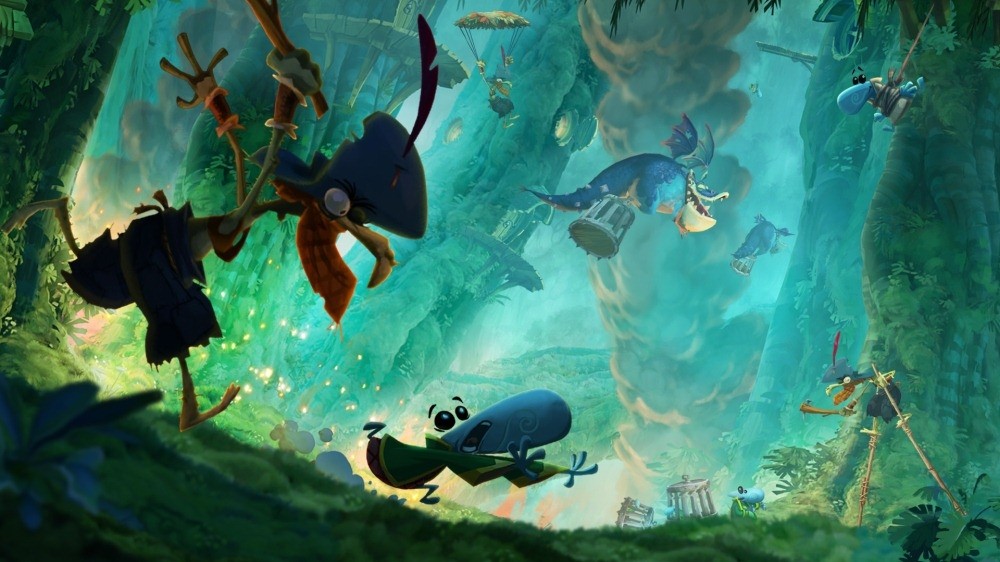 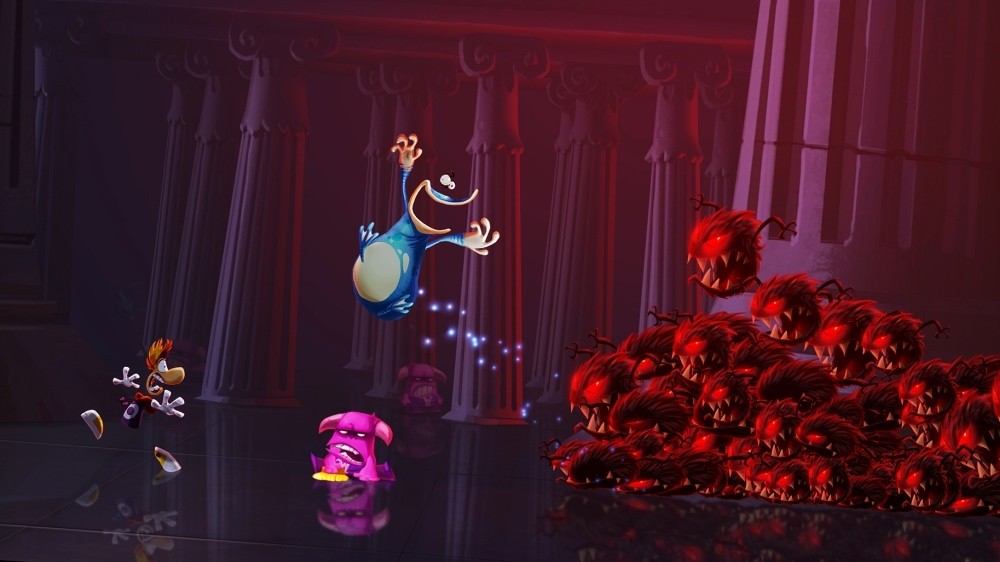 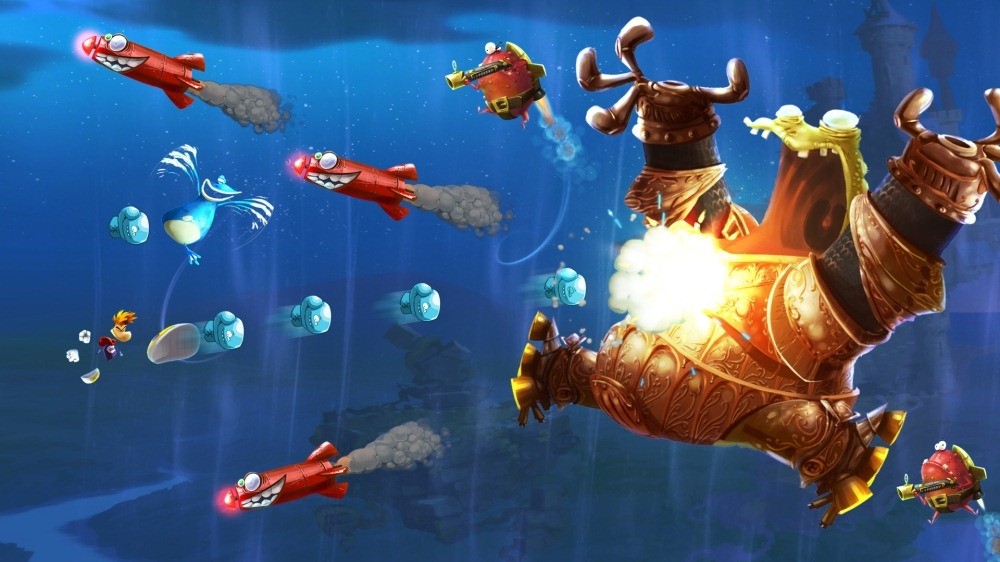