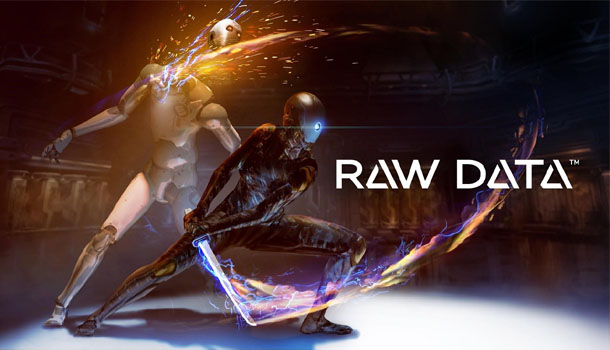 Raw Data is the reason you bought a Vive in the first place, so go enjoy it.

I had to keep reminding myself during my time reviewing Raw Data that it was still an Early Access title.  That’s how polished an experience you get from the moment you start playing until you collapse in complete exhaustion dripping in sweat.  There is great communication from the devs, and each time you start the program there is a pop-up screen that clearly informs you of known issues, new patches, and features and content updates.  But nothing can prepare you for what you are about to experience when you slip on your Vive and infiltrate the lobby of the Eden Tower.

The story is fairly straightforward and honestly I didn’t pay much attention to it due to the unfinished state of the game.  I usually wait until the game is complete before I start to analyze the narrative, but the basic premise is that I’m this badass agent sent into Eden Corp’s robotic labs to steal information on their newest line of robots.  From the lobby you have access to a tutorial area that will teach you the basics of melee, gun, and sword combat.  In the center of the room is a main display that grants you access to menus, options, and the main content of the game.  Raw Data even supports co-op play so your Steam friends’ list is also displayed in case you know someone with a Vive and a copy of the game and want to tag team some evil robots.  I never got to test this part of the game, but I can only imagine how cool it would be. 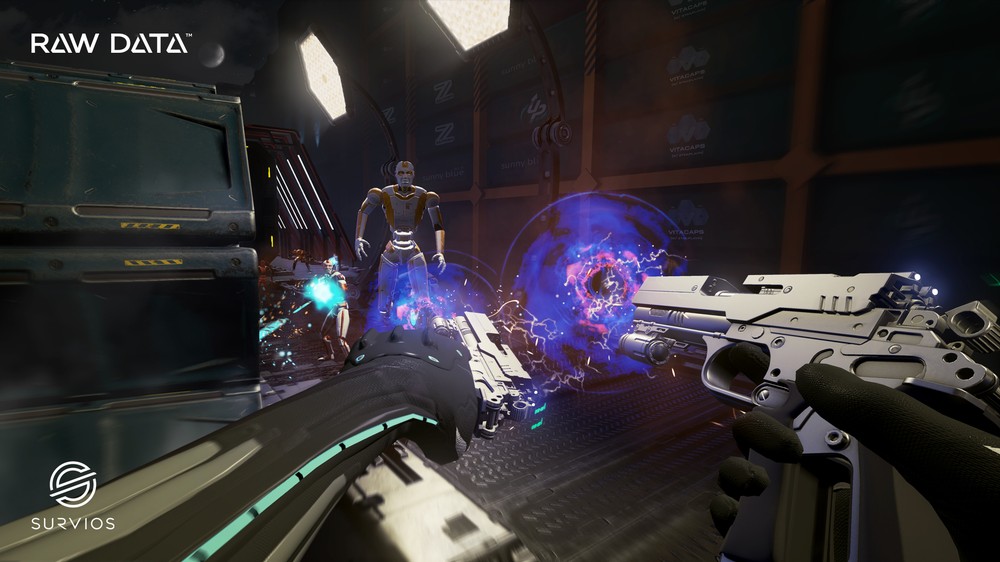 You get to pick your character which ultimately determines the way you play the game.  You can go in guns blazing with Bishop or if you are feeling particularly exotic you can become a cyber ninja and wield an energy katana as Saija – the much harder option in my opinion.  The game warns you if you try to start the main game without completing the training and for good reason.  There is a short, but semi-steep learning curve to Raw Data that requires a bit of practice before you take that elevator ride down to level one.

If you’ve seen the Will Smith movie, I, Robot then you’ll instantly recognize 95% of the enemies you are about to shoot, slash, and punch.  The rest are more advanced tank bots, flying drones, and some stealthy ninja bots with invisibility cloaks.  Raw Data is essentially a wave based shooter.  On each level you must download a certain amount of data, and during the download dozens of bots will swarm your location while you defend the data storage device and yourself.  Some bots will take cover and shoot at you from a distance while others with rush your location and try to pummel you.  Larger bots will launch explosive missiles that you must shoot out of the air or risk burning up in an area effect firestorm.

Things start of slow enough for the first 2-3 waves but by waves 4-5 you have all types of bots coming at you at once in nearly unfair numbers.  You’ll be ducking (physically) behind cover, leaning out to take shots at distant robots or swiveling around to gut punch a robot that snuck up behind you.  The game isn’t intentionally scary, but you will shout out when you spin around and find a 6’ robot with glowing blue eyes in the middle of a backswing to knock your block off. 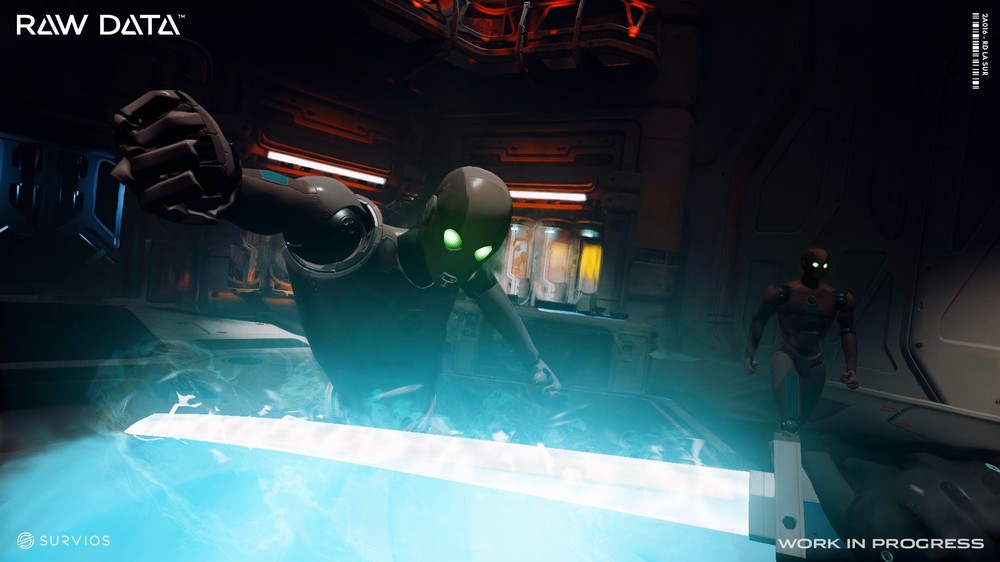 Despite the relative safety of the center of the room you will eventually be forced to retreat or strategically relocate.  This is handled with your non-weapon hand using the pad to teleport around the room, but don’t think you can spam this tool to win the game.  The teleport has a cool down period and will temporarily deactivate if overused.  But when used properly, you can teleport right up to a robot and headshot them or uppercut them.  Teleporting behind those big robots that fire missiles is a great tactic as they are slow to turn.

The controls are impressively realistic and the entire experience is so intuitive I found myself closing one eye to sight down the barrel and it actually helped.  Before the game starts you get to pick your dominant hand.  After that the gun will always appear in that hand unless you physically (virtually) put it in the other, but that is only a temporary switch and won’t affect reloading.  To reload you use your non-weapon hand to mimic the motion of grabbing a fresh clip from your hip and then ramming it home into the handle of the pistol.  A digital ammo counter clearly indicates how many rounds you have left and fresh clips are infinite.

In so many other shooters you either have a one-button reload that either instantly reloads a gun or triggers an animation of the gun being loaded, but in Raw Data you are physically doing all the motions to reload your gun every 15 bullets.  It’s actually quite thrilling and terribly tiresome after a bit, especially when you factor in having to teleport around and occasionally punch a robot that gets too close.  You need to be accurate in your motions or you could inadvertently swap gun hands. 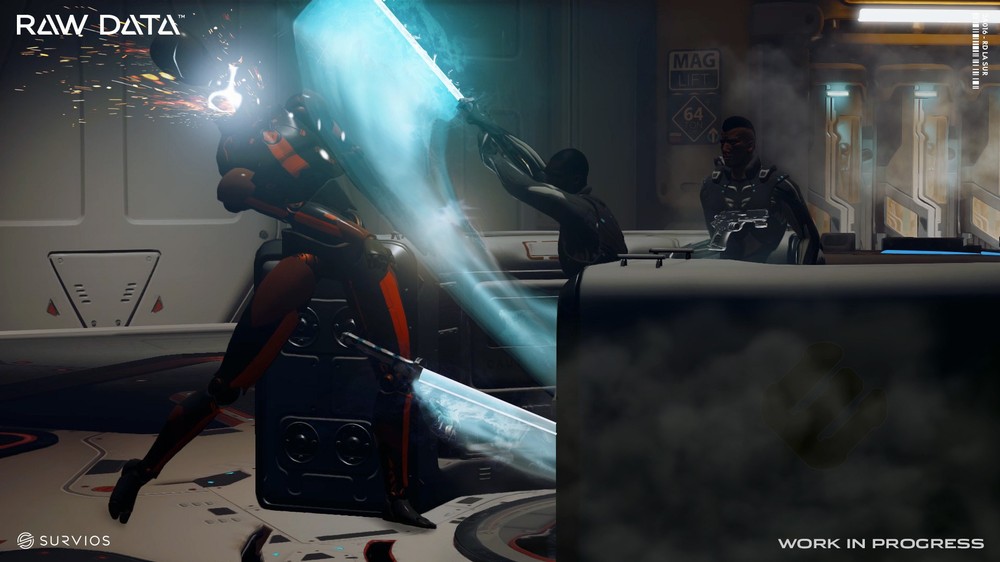 If you really want a workout try going in with nothing but an energy sword.  It’s definitely effective for robots up close, but your ranged abilities are much more challenging.  Much like a Jedi you can deflect incoming fire as well as throw your katana boomerang style at distant targets.  Without a crosshair this is purely instinctive but equally rewarding when you take out one or more targets on a single throw; especially if you get them on the sword’s return trip.

For now the game only has two playable characters although there are at least two more coming for final release.  There is also only about five hours of playable content in the current version, but given the almost arcade nature of the game design I’ve had no problem spending much more time than that replaying the arenas provided.  It would be nice to have some linear exploration in more expansive levels using the teleport system.  I don’t mind the one room wave-based nature of the combat, but fighting in hallways or other environments would be cool too.  There are upgrades you can get for the current weapons including a dual-wield option, and new weapons and abilities will be added as the game moves toward final release. 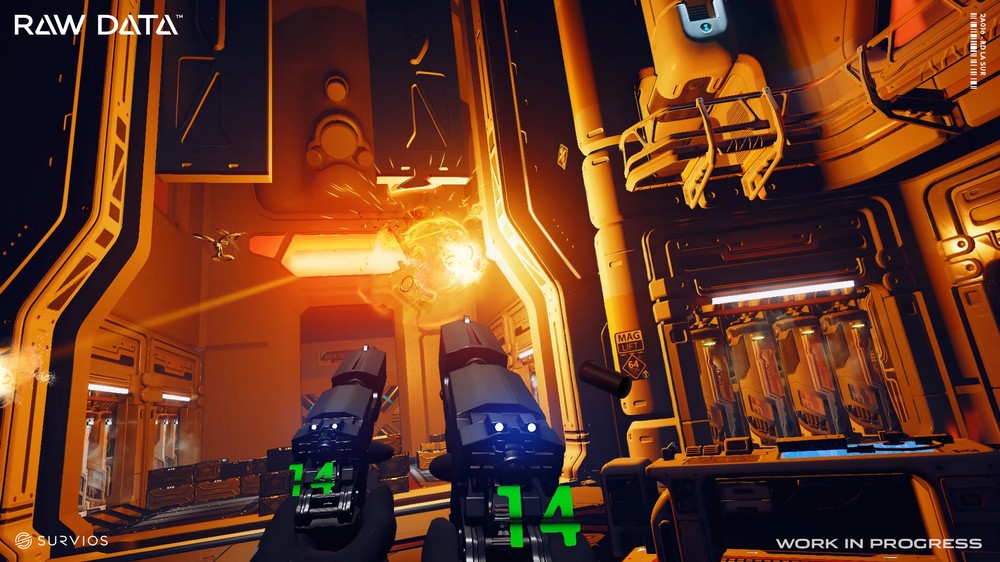 Raw Data has an incredible presentation value that totally immerses you in this virtual world.  Unlike most games that only render hands this game gives you forearms as well, which actually appear to extend from your physical body when viewed from your lower peripheral vision.  The fingers articulate and you can press the triggers to grip and make a fist before punching.  The model for the gun was stunning and I stood there for minutes admiring the brushed metal with realistic defects and the 3D modeled brass bullets in the see-through magazine slot.  The voice work, music, and especially the sound effects are amazing and quite loud.  The 3D positional audio is crucial to hearing where the bots are attacking from so make sure to play this game with headphones.

The comfort level is impressive thanks to the intuitive teleport system that blinks you around the level with virtually no motion sickness.  When I finally did stop playing Raw Data it was almost always due to pure exhaustion and never due to an upset stomach.  This game is a real workout!

So many times you hear “built from the ground up for VR” but this time the developers really mean it.  This is by far the best VR game I have played on the Vive to date, and it really excites me to think that someday I might be playing Call of Duty or Battlefield in a similar fashion.  I realize $40 is a pretty steep price for an Early Access title, and honestly there probably isn’t $40 worth of gameplay here at this very moment, but in the two weeks I’ve had this game there have already been numerous updates and hotfixes and even in its current state this game is more polished than other “finished titles”, so I am confident Raw Data will evolve into something truly amazing in its completed form, and your $40 will only help make that happen that much faster.  Raw Data is the reason you bought a Vive in the first place, so go enjoy it. 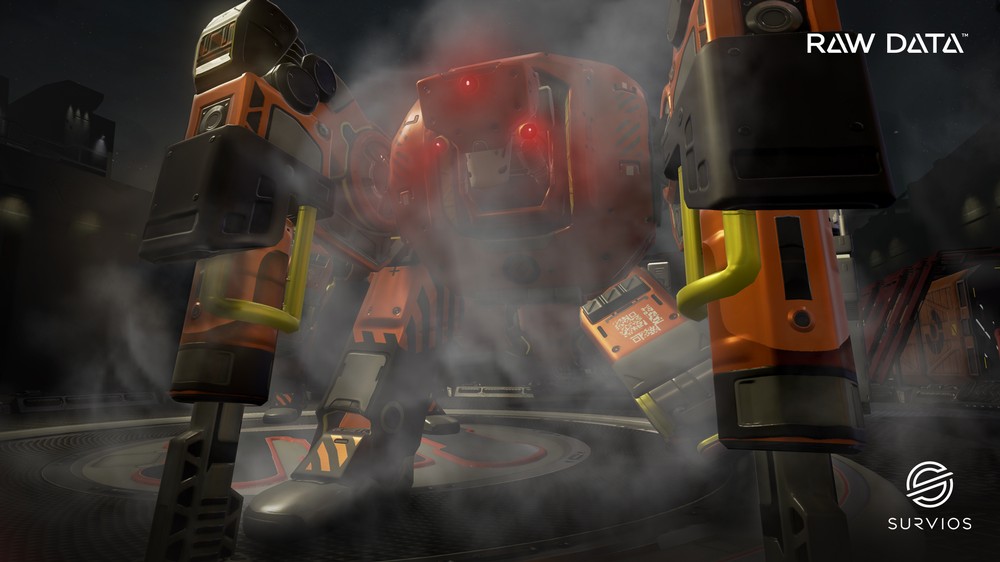 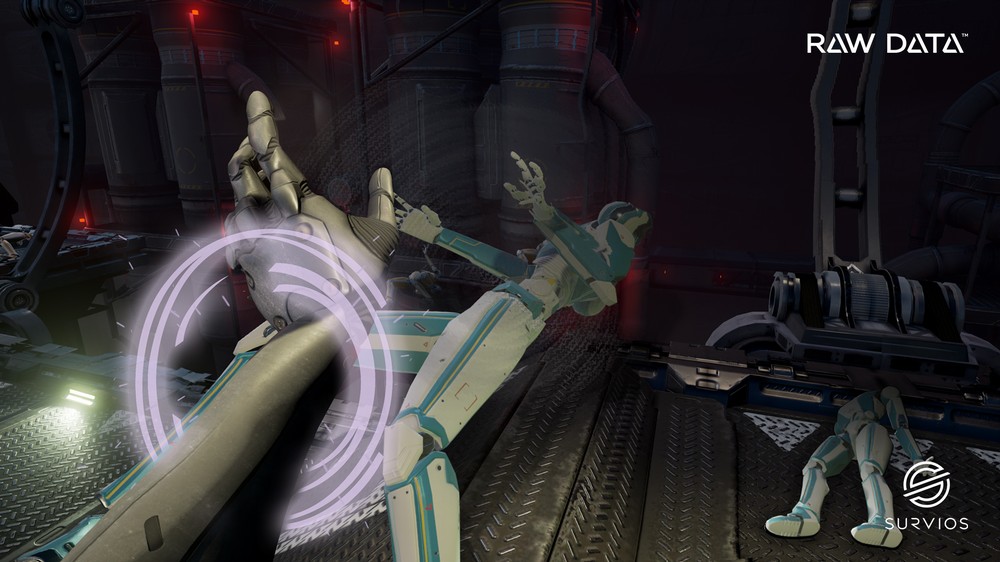 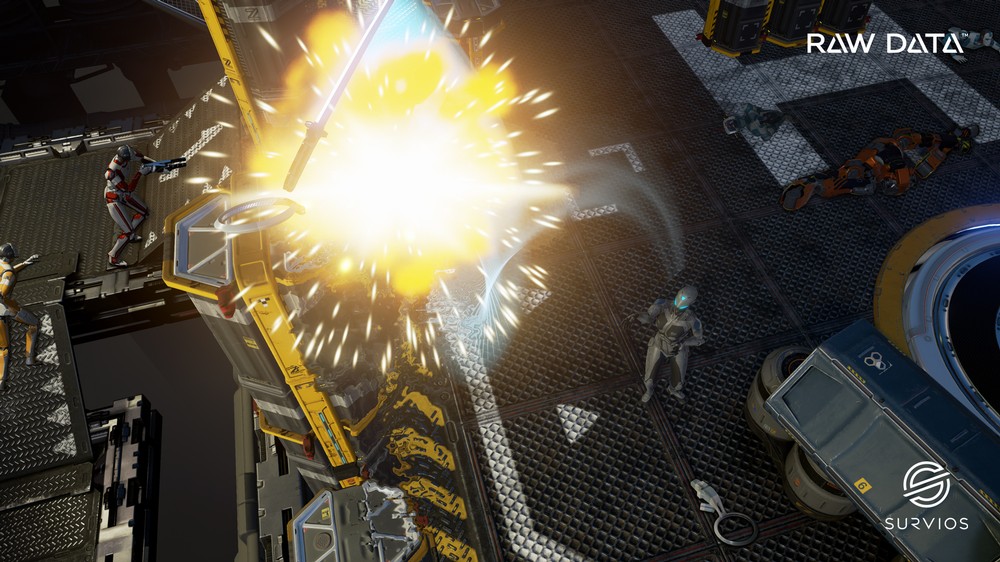 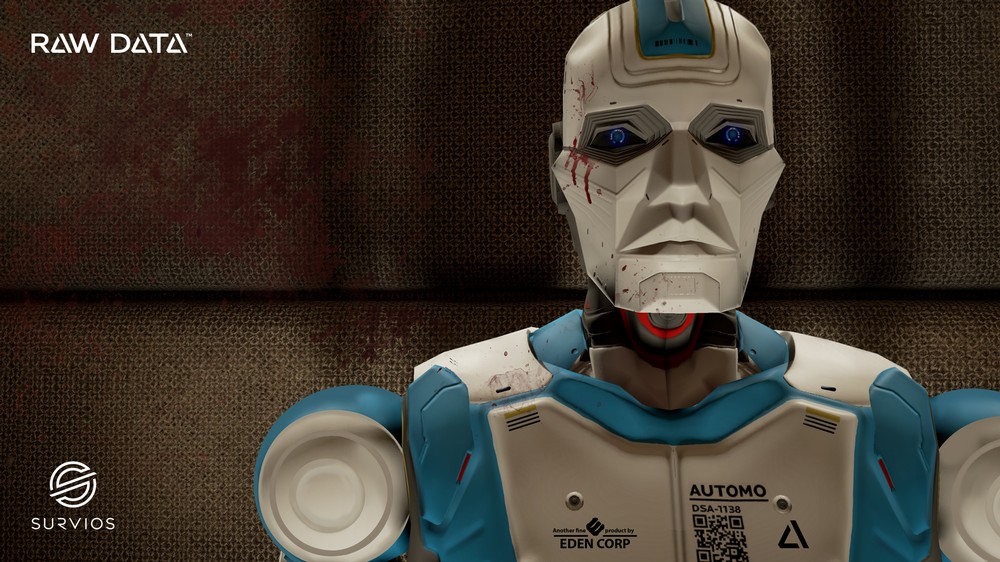 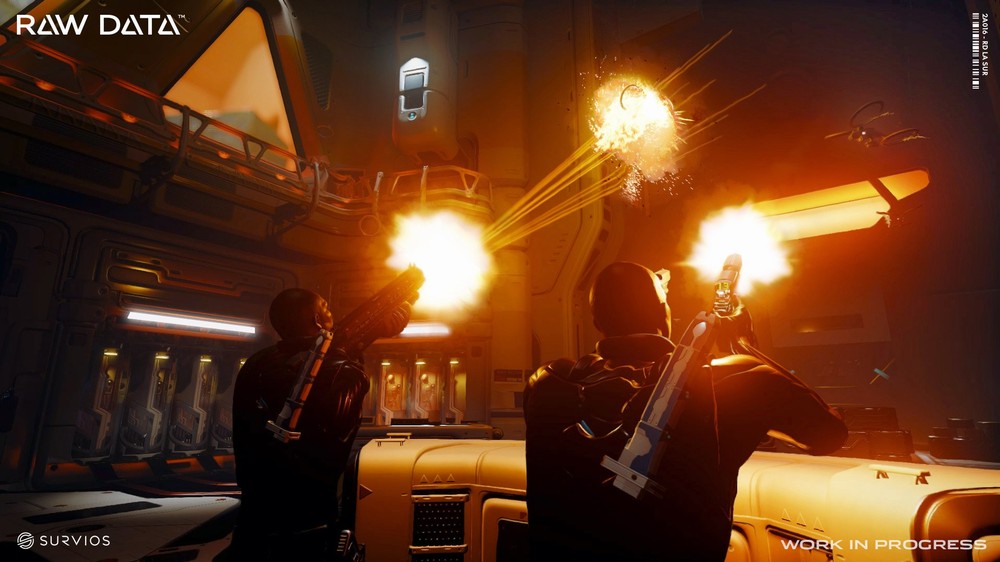 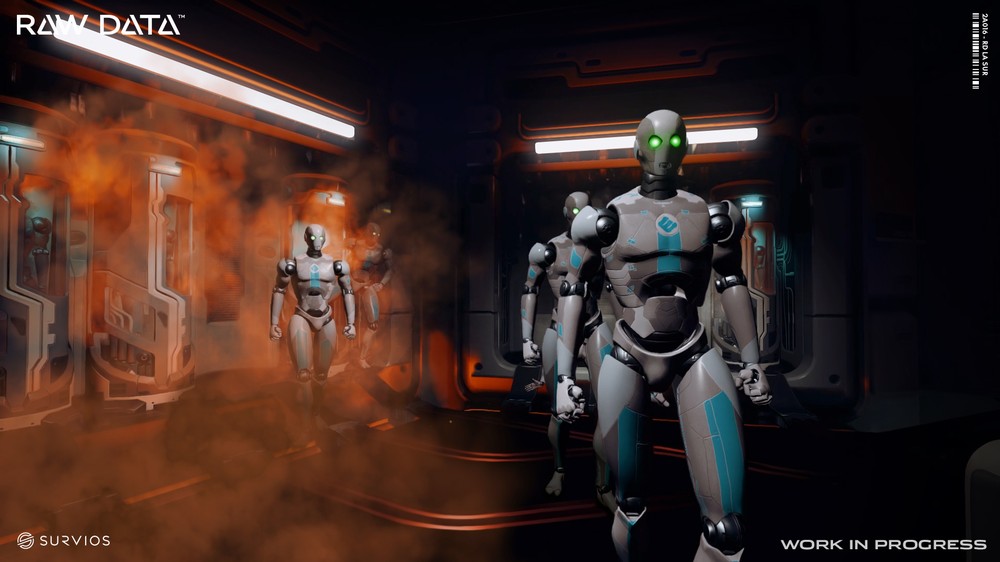