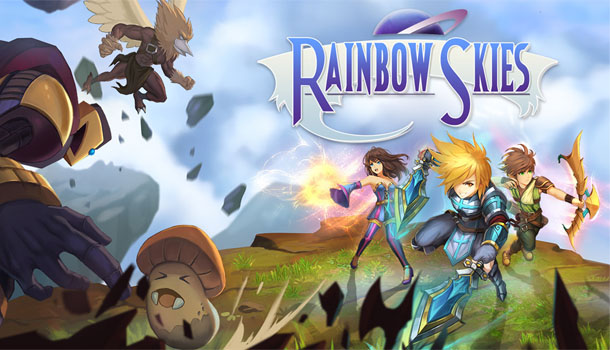 I played Rainbow Moon upon its original PlayStation 3 release back in 2012, and though I had fun with it, I largely found it to be a competent but unremarkable RPG. I enjoyed my time with it, but once I put it down I found that I rarely thought about it again, until I was offered the chance to play the sequel, Rainbow Skies, which recently became available on PlayStation 4, PlayStation 3 and Vita. With cross-play enabled, this is an RPG designed for playing at home and on the go, and packs in enough content to keep you busy on your commute for weeks and maybe even months.

Rainbow Skies feels a lot like a natural evolution of the formula presented in Rainbow Moon, which didn’t stray too far from the experience expected from a typical JRPG. Its presentation is simple and clean, and you could be forgiven for thinking that the cheerful, colorful exterior is representative of an RPG experience for beginners. The truth, though, is that Rainbow Skies packs a ton of content into its charming package, and while there is enough depth to keep veterans occupied, the game is more than welcoming to beginners, explaining the various mechanics in a good amount of detail, and introducing them at a pace that prevents you from becoming overwhelmed. 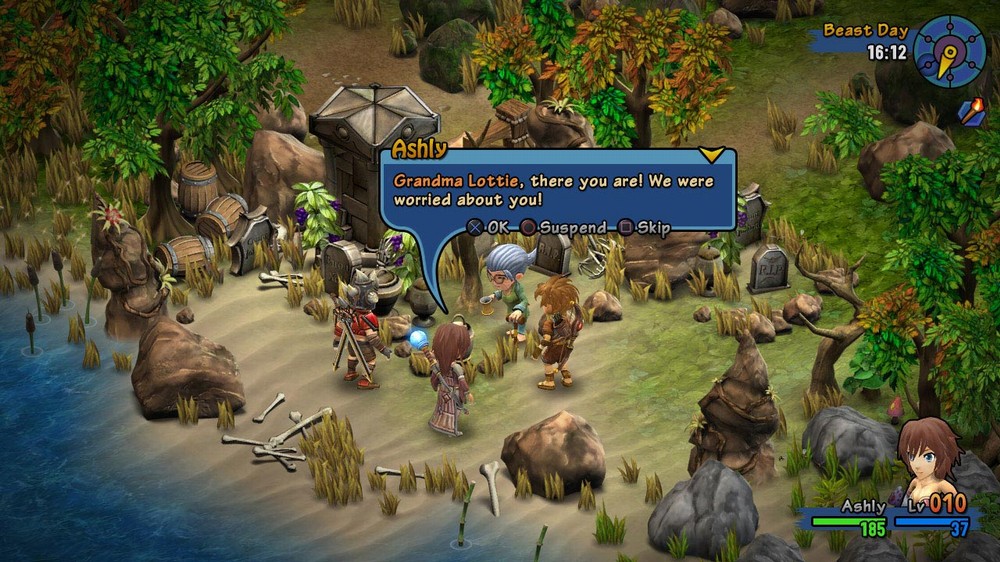 In these tutorial screens, there’s a large amount of fourth-wall breaking humor, referencing RPG tropes and the developer’s past with Rainbow Moon, and it gives a great sense of the development team having fun with making the game, and I couldn’t help but have a smile on my face whenever a new batch of information showed up. Often, in RPGs, and even other genres, sections that teach you how to play the game are dry and perfunctory, sometimes to the point of patronization, and I usually find myself hammering the skip button, especially when the tips being presented are of the kind that are clear to anyone who’s ever held a controller before.

This charm that’s present in in the tutorials is laced throughout Rainbow Skies, and it’s honestly one of the strongest aspects of the entire experience. It feels like the developers are encouraging you to have fun with the game, but it never borders on neediness, or like they’re trying too hard. From monsters to quest design, Rainbow Skies feels designed with the player in mind, and this extends to the amount of side quests and rewards that are available to be claimed. The variation of tasks on offer is huge, and each and every type of RPG player is accounted for. If you like exploring every corner of the map, you can get rewards for that, and if you like defeating all kinds of enemies, you can work towards completing that quest too. There are even a number of difficulty settings available, which present different challenges, allowing players to tailor the game to however they would like to play. 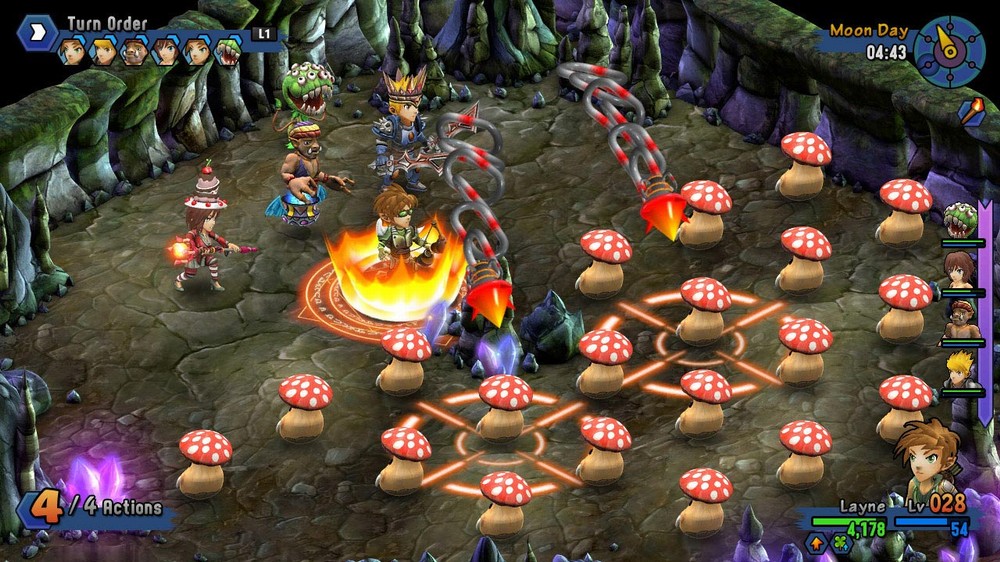 If you want a challenge, the game tasks you with proving that you’re up to the test, as you’re required to work your way up difficulty levels, just to make sure you’re not straying too far out of your depth. If you’re happy to stay on the minimum difficulty though, that’s a perfectly feasible option, and that’s the one that I took, as I spent a good deal of time playing Rainbow Skies on my Vita on public transit. Cross-saving is easily done, as long as you have a Wi-Fi connection, and years after the Vita’s release, I still love being able to take my save on the go with me. The experience offered on a handheld screen is similar to that presented on a TV, and I loved being able to mindlessly grind on my commute, and then come home after work, load up my save, and be able to continue the story on my TV with leveled-up characters.

However, the more that I played Rainbow Skies, and the further that I progressed through the story, I found that this grinding became more of a necessity than a welcome diversion on my way to work. I’m well aware that grinding and character strengthening is a pillar of the RPG experience, but when it starts to feel like it’s artificially extending the experience, I quickly begin to turn off of the game as whole. There’s nothing that I find more discouraging than feeling like I’m deliberately being prevented from progressing through a game, and it’s strange that Rainbow Skies resorts to this tactic as heavily as it seems to, as there’s more than enough content contained within it to keep gamers occupied for many hours already. 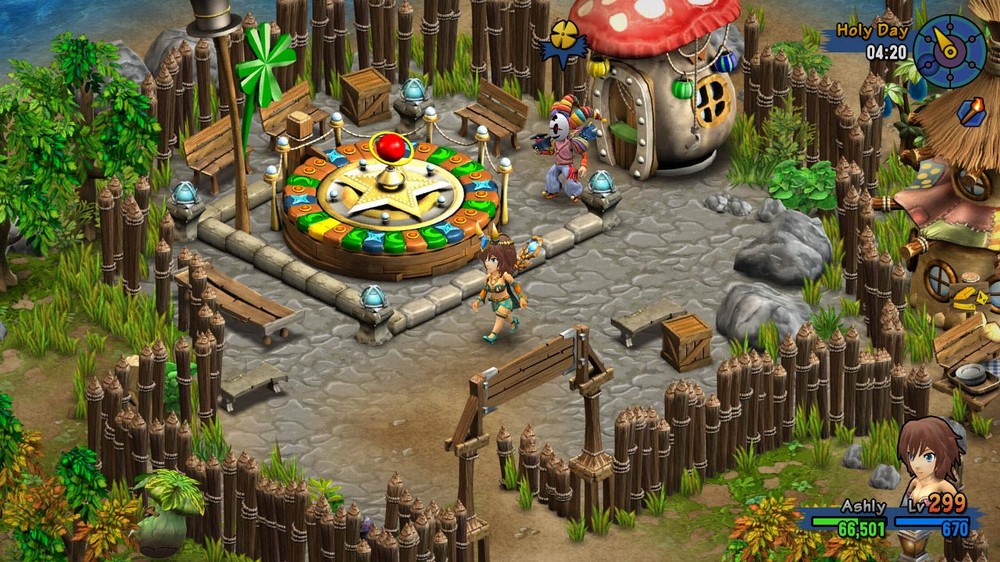 With many RPGs, this point of the game, where grinding begins to create friction against story progression, I start to think about whether the story on offer has done enough to keep me interested in pushing through, and whether I feel committed enough to burn my way through to see the end. In the case of Rainbow Skies, despite the charm of the game, and the obvious love that the developers have for their creation, I didn’t find the story nearly compelling enough to continue playing past this point. Huge RPG fans will likely be able to get past this blockage that I encountered, and those with a lot of time on their hands will be able to grind away to their hearts content, and this probably won’t present a problem to them. However, for me, when it comes down to a calculation of the time it would take to become strong enough to see the next part of a story that I’m not all that invested in, I decided to jump off of the ride.

It’s a strange feeling, as the time that I spent with Rainbow Skies, especially early on, was a lot of fun. I always enjoy a traditional RPG experience, and if it can be described as anything, Rainbow Skies certainly goes a long way towards being labeled as that. However, this description brings with it a double-edged sword, as elements of traditional RPGs are eventually what turned me off of the experience. When I was younger, and new games in my collection would only come along at Christmas and Birthdays, I would have loved an experience like Rainbow Skies, as it would have kept me busy for months, and the number of genre-specific roadblocks wouldn’t have been an issue to me. In the modern gaming age, though, with a backlog running into multiple hundreds of titles, as well as a full-time job and a social life, I just don’t have the time or the desire to spend hundreds of hours with a game, especially when it feels like the majority of the time I’d be spending with the game aren’t directly progressing the experience. 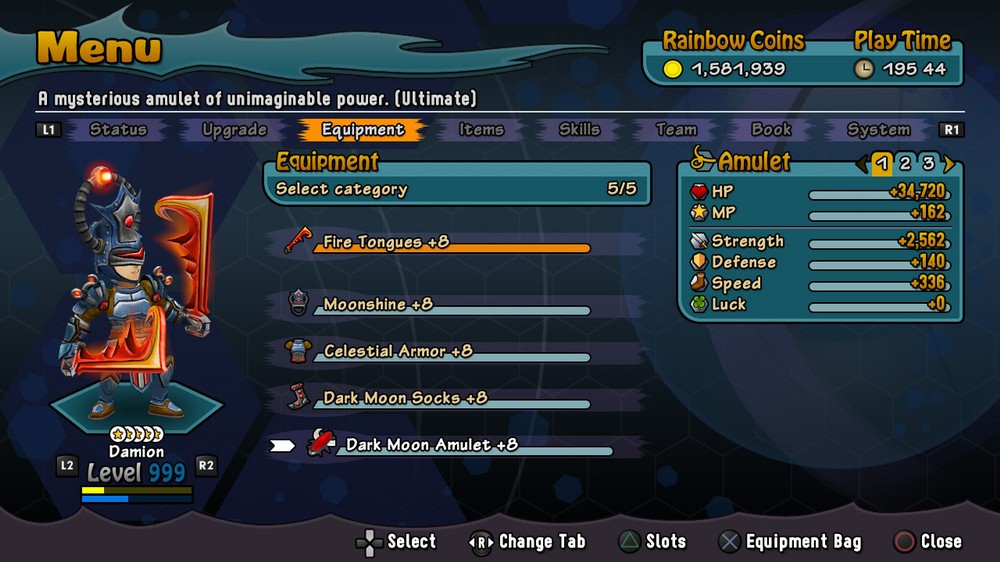 Obviously this can be interpreted as an incredibly personal reaction to the game, and I want to make it clear that I don’t, for the most part, feel as if Rainbow Skies is a bad game, as it offers an incredibly solid, charming RPG experience. However, the experience that it presents isn’t compatible with my gaming routine, and I feel like this will be similar for a lot of gamers with careers or families who don’t want to lock themselves into a single experience for months to come. If you do have the time to devote to Rainbow Skies, though, you’ll be well-rewarded, with a beautifully presented experience that rewards you for playing in the way that you want to, whether that’s combat, story or exploration focused. 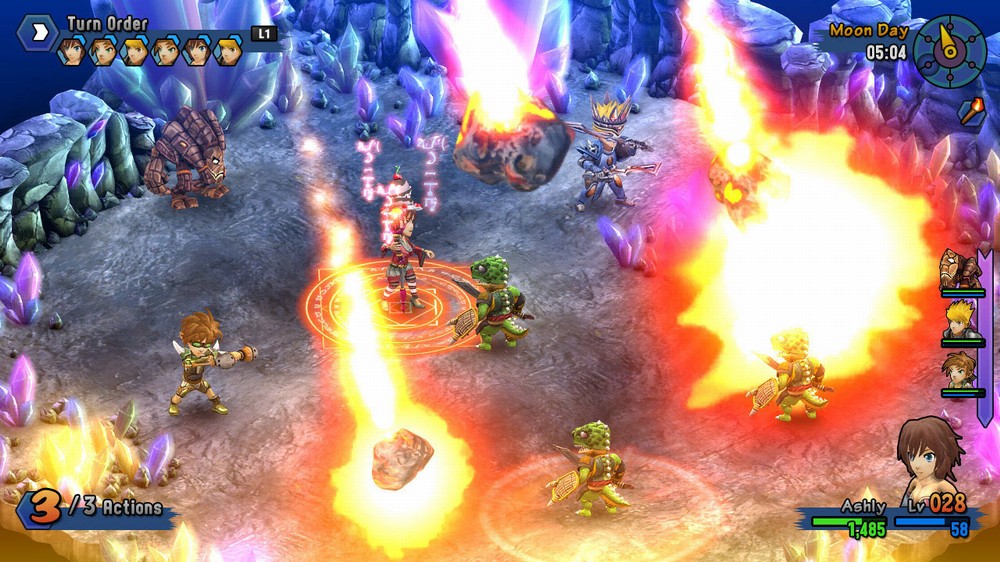 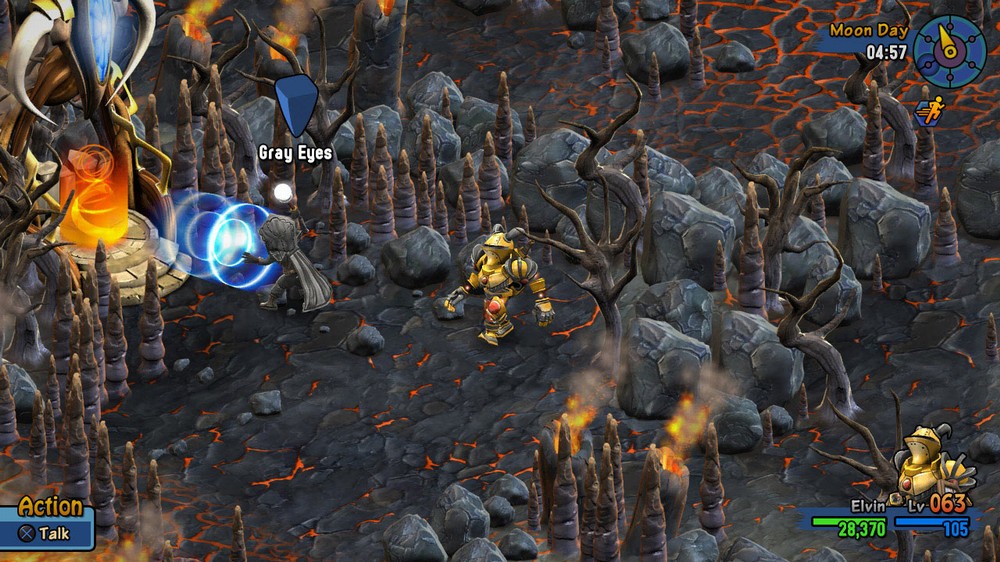 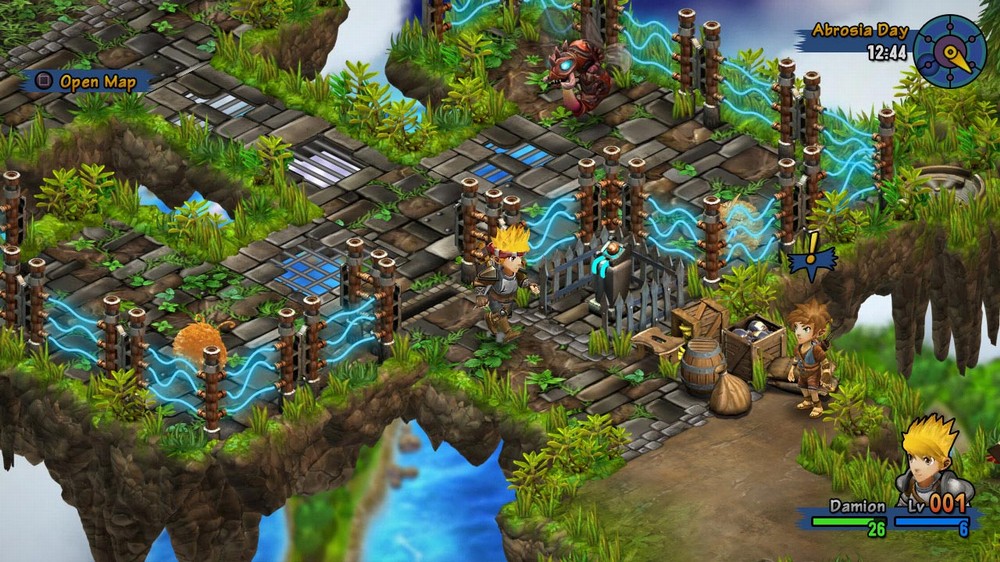 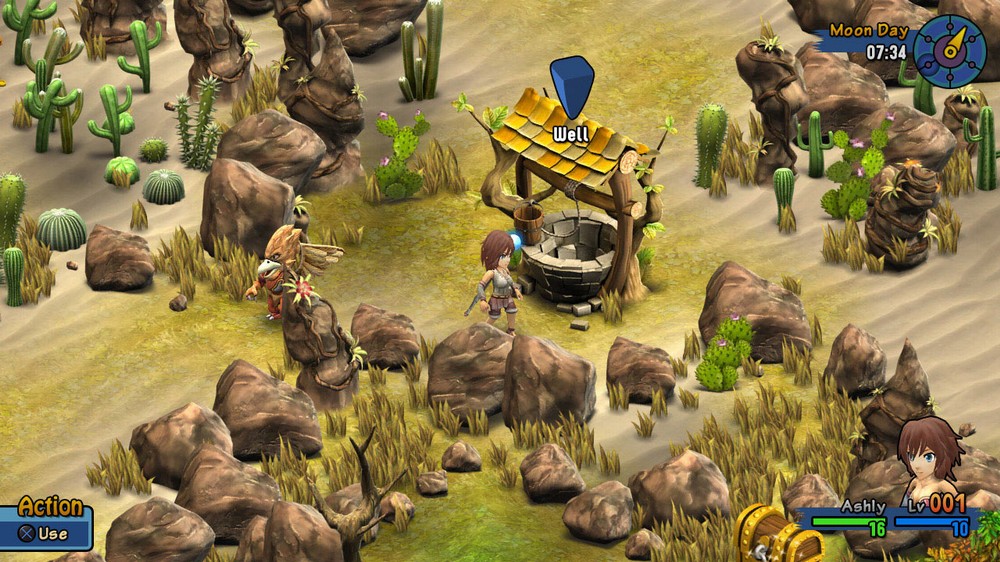 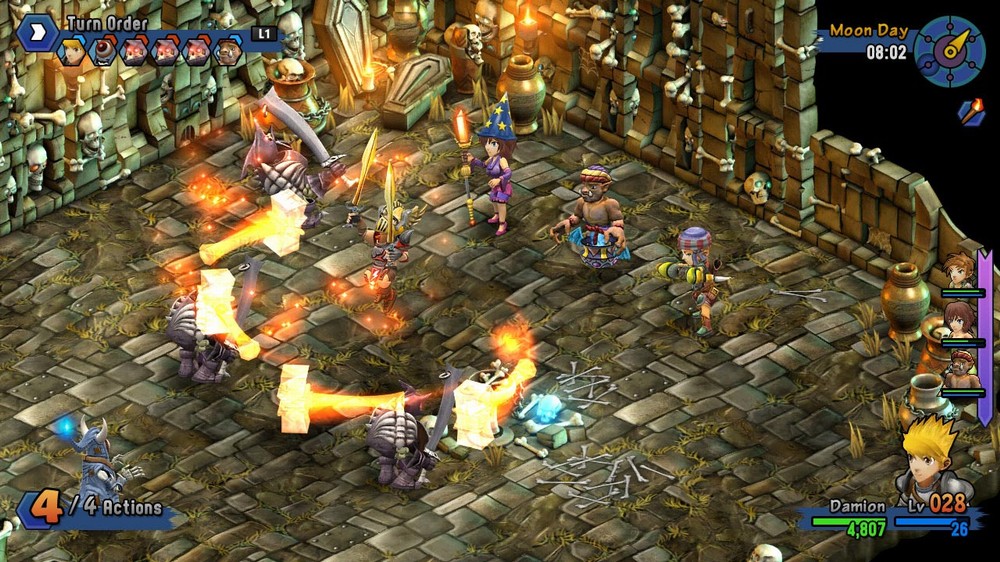