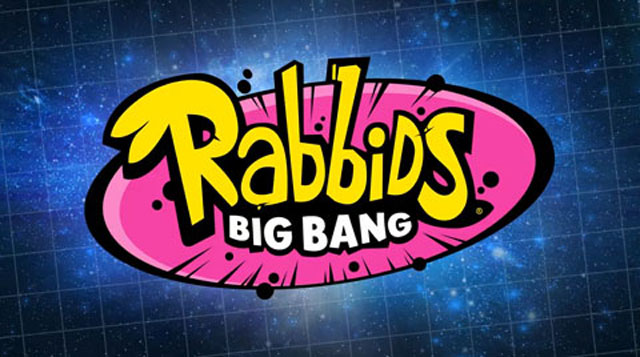 Lack of variety has the game getting stale long before its over.

A great physics puzzler that is best in short doses.

Ubisoft’s Raving Rabbids have infiltrated every facet of gaming culture, and now they have finally made their way to your iPad in Rabbids Big Bang.  Borrowing on the gravitational orbital gameplay of Angry Birds: Star Wars, Ubisoft takes that premise and runs with it by creating 150 challenging missions that will have you smiling and giggling like a toddler for hour after addictive hour.

The premise is simple.  You start as one of two creepy rabbids who bashes the other with a bat, plunger, golf club (the list goes on and is upgradable in the store) sending the other flying out into space.  Scattered about the screen are planets, UFO’s, coins, and fuel orbs.  Using the natural gravitational pull of the various planets along with well-timed thrusts from your jetpack you can steer your rabbid around space trying to complete whatever the mission objective is in the shortest period of time.

Objectives start off easy enough like landing on a nearby planet, but goals start to ramp up in difficulty when you must fly through space for so many miles or make x-many orbits around planet y or collect a certain amount of coins, or hit a set number of UFO’s, etc.  The goals are always changing but not nearly enough to keep things from getting repetitive about an hour into the game.  The whole mastery of conserving fuel and knowing when and how to use your jetpack in unison with gravity is a rewarding experience thanks to some interesting physics that feel quite natural despite being totally unrealistic.  There is a nice endorphin rush when you find that perfect trajectory that sends you through a bundle of coins before you break orbit and fly towards a distant planet, all without the help of George Clooney. 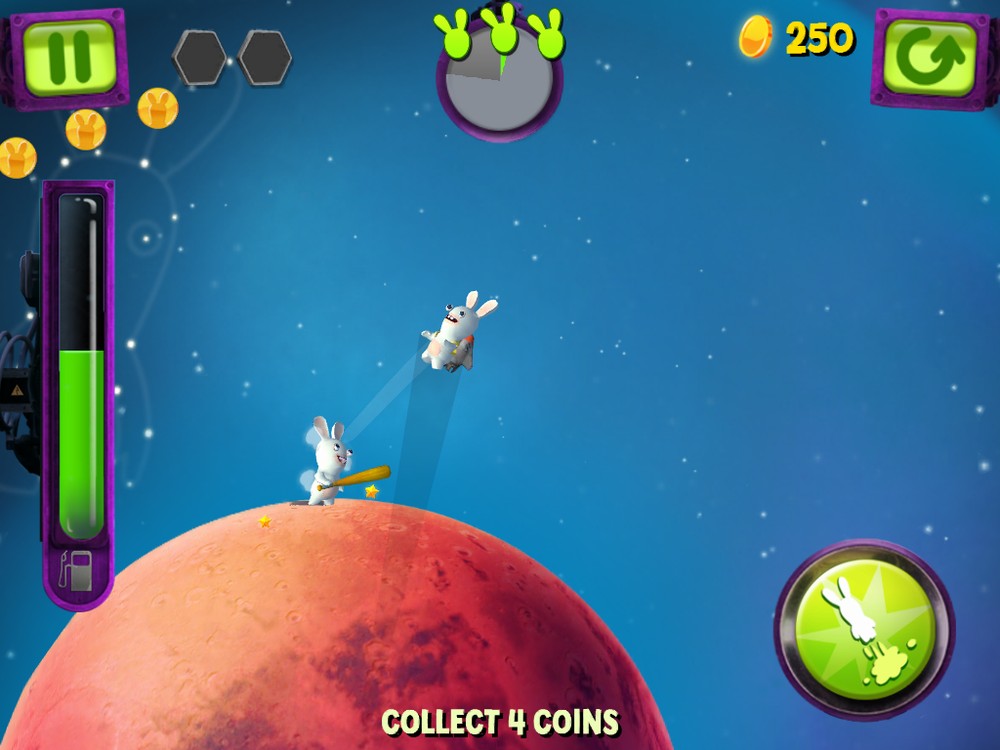 Over the course of the game you’ll earn hundreds and perhaps thousands of coins that you can spend in the shop to upgrade your launch device (club) and upgrade your jetpack as well as customize the look of your rabbid with hilarious new costumes and features.  Sadly, all these upgrades are purely visual and for comedic effect.  The rules of the game and the way you play are unchanging.

Unlocking all the customizations along with the 3-star (or in this case bunny ears) award system for each level will keep you playing each mission until you earn top honors.  In order to get 3 bunny ears you are going to need to complete your goals in record time, which means finding the shortest and fastest trajectories to reach your targets.   Sometimes this is easy and other times it is brutally impossible…or so it seems.

Finishing all 150 levels can take a long time and getting 3 bunny ears on all of them will take even longer, and while there are loads of laughs and some interesting gameplay mechanics that will test your awareness of gravity, speed, and trajectory, Rabbids Big Bang starts to run out of fuel about a third of the way through; at least when it comes to originality.   In-app purchases of additional coins will help you buy more fuel, but that is basically a crutch for those unwilling to put the time into flying through space to collect the free fuel orbs.

If you like the orbital parts of Angry Birds: Star Wars then you’ll probably like Rabbids Big Bang.  It has the same concept only without all the smashing and dead imperial pork.  Kids will love the cackling rabbids as parents quickly look for headphones to keep from going insane at the incessant laughter.   This might not be rocket science but it is a lot of fun and it’s only a dollar.  Go for it. 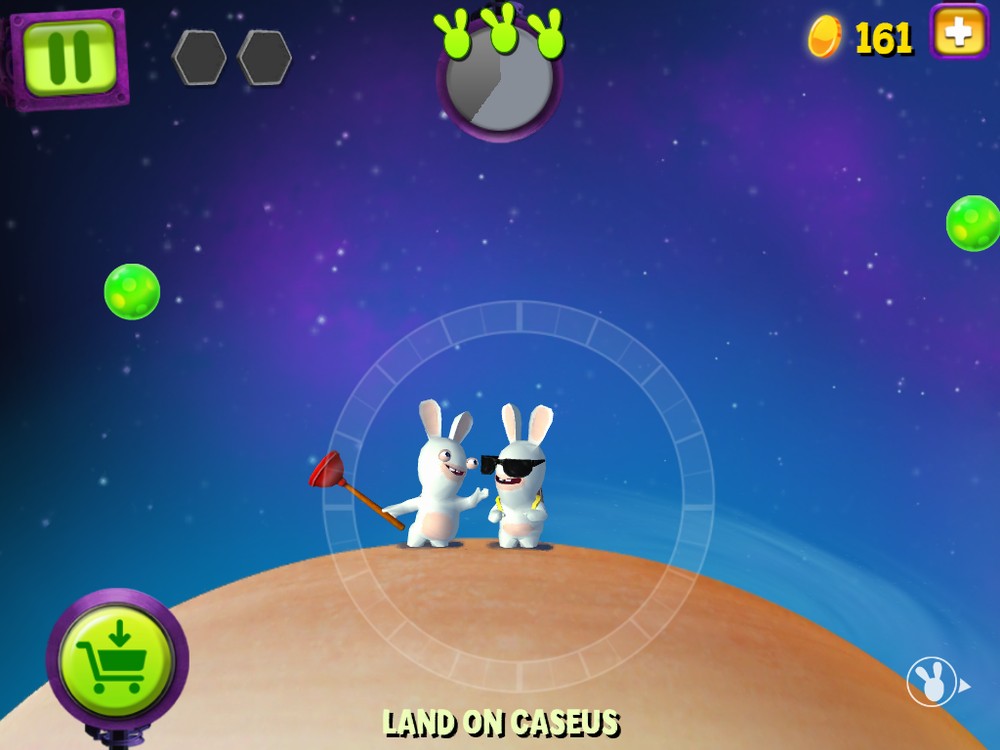 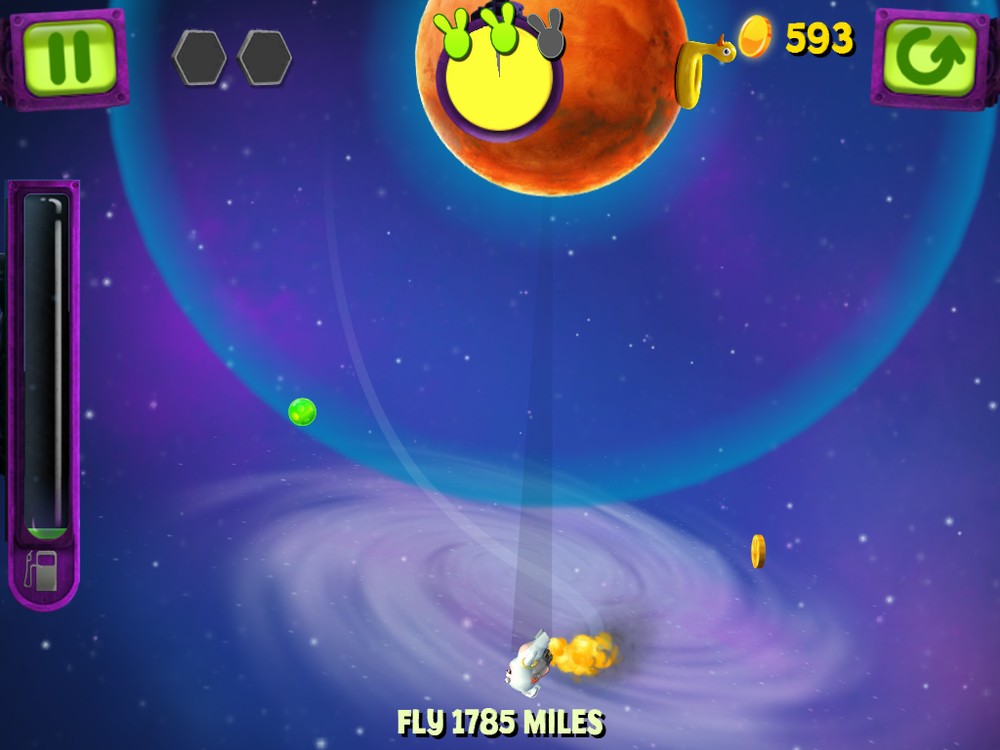 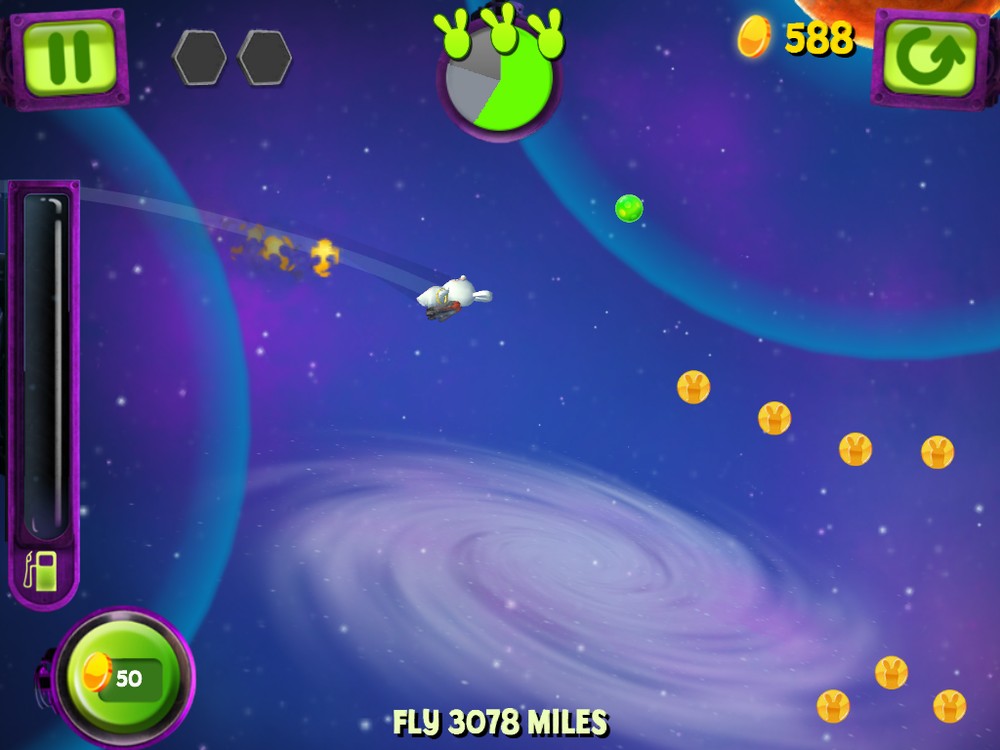 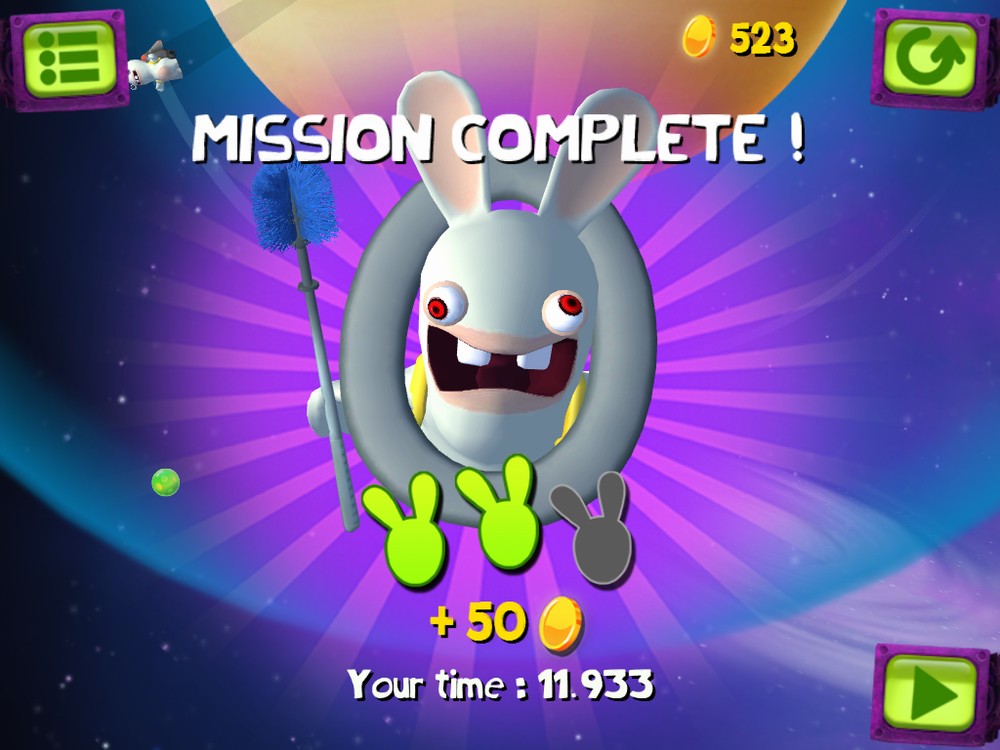 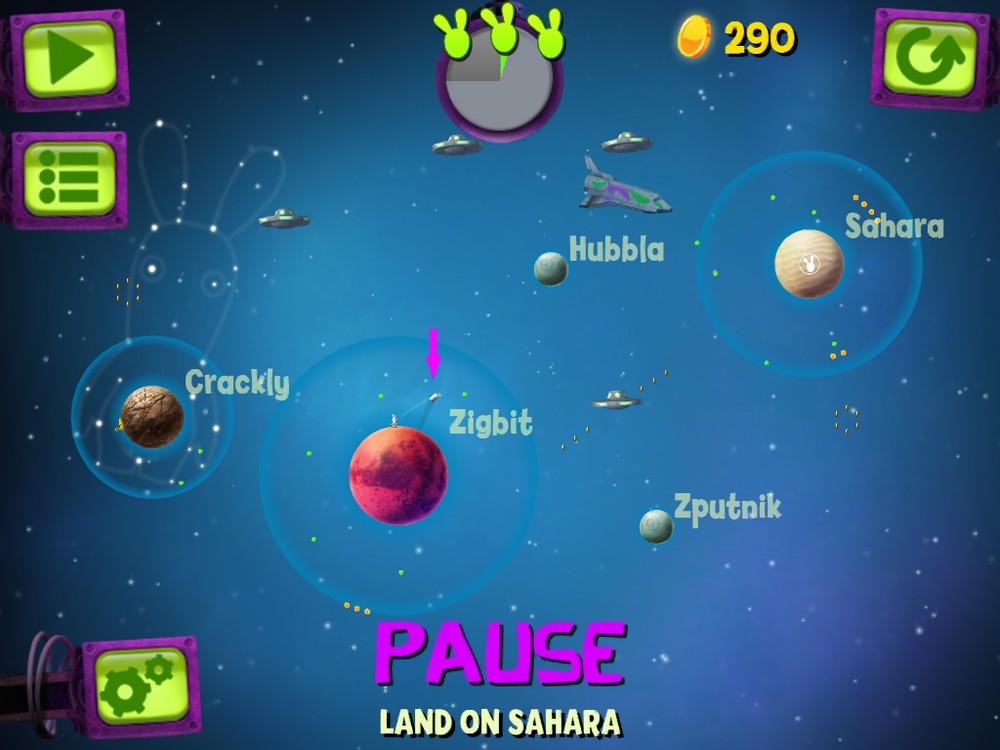 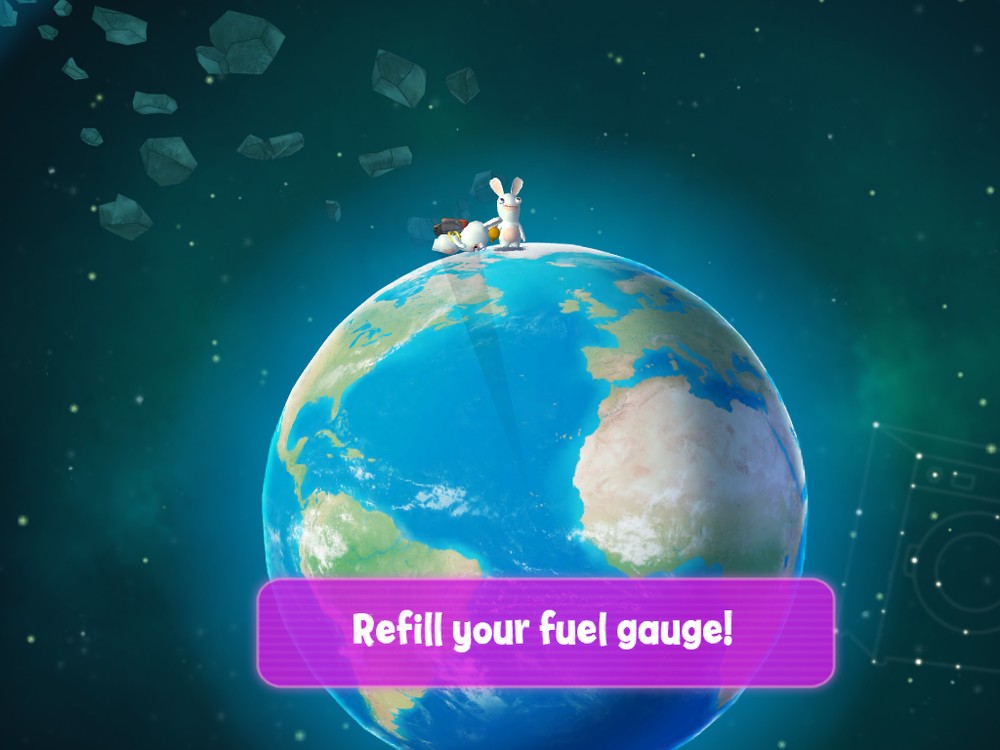 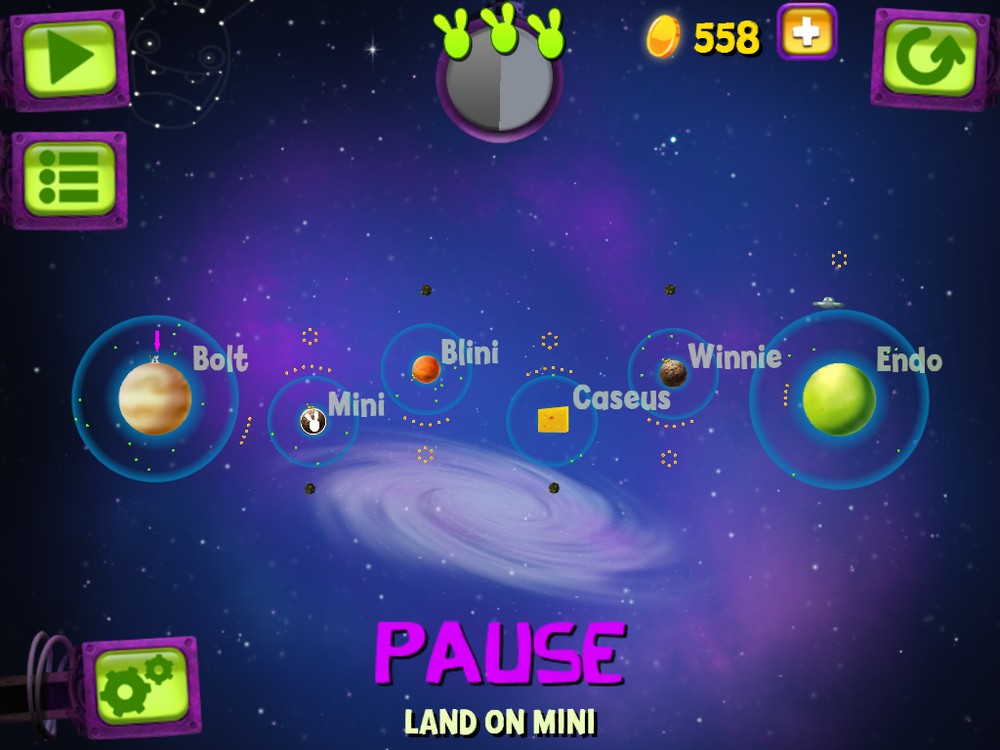